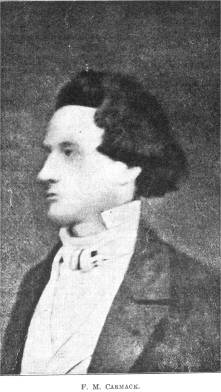 Among those who shared in the labor of teaching in Franklin College during the period of its brief existence, no one deserves more kindly remembrance than F. M. Carmack. He was born in Tishomingo County, Miss. The exact date of his birth is unknown to the writer. He entered Franklin College as a student in the year 1849. An older brother, E. W. Carmack, was a member of the graduating class of 1848. Their father was a leading citizen of the county, and was a member of the State Legislature for several terms; a Democrat in politics, a Methodist in religion. The older brother, who, after graduation, chose the profession of teaching and for a number of years conducted a high-grade academy in the town of Jacinto, remained a Methodist until death. The subject of this sketch was a member of the graduating class of 1851. So far as known, not one of the class is alive. A few weeks before graduation, being of a little more independent turn of mind than his brother had been, he accepted the terms of salvation offered in the gospel and put on the Lord Jesus Christ in baptism. This was quite a bitter pill to his father, who attended the closing of the school. Some one spoke to him in terms of praise of his son's address on "Commencement Day." "Yes," said the father, "that was all very good; but be would go down into the water." This seemed to dash with chagrin the whole matter.

As a student, Professor Carmack was faithful, honest, and far beyond ordinary in mental grasp. His taste was inclined to those studies which were literary and graceful rather than the exact. Still, he was no dullard in any department. Possibly the most striking trait of character both of himself and his older brother was geniality of disposition. His brother was a little careless in dress and bearing - sometimes a little waggish. Professor Carmack was more careful and cultured in his habits of life. While both were pure and clean in life, their uprightness was not of that harsh, repulsive character that offended those whose lives were not of so upright a mold.

Immediately after graduation, Professor Carmack was chosen as a member of the corps of instructors of Franklin College, giving special attention to the teaching of Latin and Greek. He also for a while had charge of the preparatory department. In every position which he occupied he was efficient and successful, greatly respected, and beloved by his pupils. Teaching, however, was not his peculiar forte. As a speaker and writer, he was specially gifted. His change of religious views brought about a consideration of matters of controversy; and while quite young, both in physical and religious life, he wrote several articles of much power bearing upon the matters which separated him from the faith of his fathers. He was vigorous in thought, felicitous in expression, and full of that tender, touching pathos that showed most clearly that religious sentiment with him was no barren dogmatism destitute of vital force in the emotions of his soul. His speaking was after the same order as his writing - a happy commingling of clear, well defined, logical instruction with deep and earnest feeling. He enlightened the understanding and enlisted the soul.

Not a great while after be began his work as teacher he was married to 'Miss Elvira (Kate) Holding, of Lewisburg, Tenn., a lady far beyond the average in native powers of mind and heart as well as culture. To them were born three children - one daughter and two sons. The daughter reached womanhood, and was married, but, being frail of constitution, did not live long after her marriage. The two sons still survive. The younger is the present senior Senator of his State in Congress. He inherited the intellectual ability of both parents, and especially the oratorical power of his father, with a large addition of personal ardor and vigor. He was too young to know or be impressed with the gentle worth of his father's example, or his life might have been different.

Not a great while after our friend's reaching manhood there began to develop in his constitution signs of lung trouble. While he continued to labor as teacher and preacher, it soon became evident that his earthly life would be cut short. Finally, after an earnest struggle to keep at work, he was compelled to surrender. His last days were spent in Sumner County, Tenn., in the hospitable home of Brother and Sister Joseph Harlan, near Castalian Springs. He closed his eyes in death during the summer of 1861, just as the fearful storm of war was beginning its work of devastation and blood shed. A pure, upright, God-fearing man, useful to the full extent of his physical ability, a most happy combination of the sweetness and gentleness of love and firmness and devotion to the truth, he passed, in the prime of life, from the afflictions of mortality to the glorious heritage of peace and Test which awaits the faithful. I have known few, if any, characters more worthy of unreserved admiration and esteem. In all my association with men in my work as teacher I have known none more lovable in character and of greater promise of true usefulness in the work of human elevation than F. M. Carmack.

In February, 2001, I visited the Nashville area one afternoon on my way home from the Freed-Hardeman University Lectures, Henderson, Tennessee. On the way I stopped in Hendersonville and picked up my good friend Ed Scully, father of our church secretary, Vicki Baker. I needed a scout and he knew the area about as good as anyone could. I then headed toward Gallatin, Tennessee, northeast of Nashville. (You can get there a bunch of ways, but the best I've found is take I-65 to Vietnam Veterans Pike (Hwy 386 E). Take the Gallatin Pike (Hwy 31-E) exit and go left (North). When you enter Gallatin go to Hwy 25 and turn right (Main St.). While in Gallatin, I found the library, (on East Main St.) the name of which was none other than, E.W. Carmack Library, named after the famous son of F.M. Carmack who was Congressional Representative for the state of Tennessee many years ago. (Incidently, E.W. Carmack is buried in Columbia, Tennessee) In the library, I found the family homeplace and gravesite of F.M. Carmack to be about 6 miles east of Gallatin, near the Old Union Church of Christ. Take Hwy 25 E (E. Main in town) and go about five or six miles. When you cross Old Hickory Lake it will be the next turn to the right. You will see the Old Union Church of Christ on the left before turning into Harsh Lane. Very shortly you will see an antebellum house being restored on the right. This is the old Carmack home. The house is now being restored. The address is 200 Harsh Lane. The place is called, Elm Grove. I had a good visit with the owner, who took me out to the south of the old house across a pasture. At the edge of the property line, against an old barbed-wire fence line, was the old cemetery where Carmack is buried. When I was there, it was grown over, and I was unable to see Carmack's stone. I have since received a list of those buried in the cemetery. The owner said that the cemetery was one of her projects of restoration, along with the old mansion. Hopefully a picture will be forthcoming. The owner said she would photograph the grave when it was available and send me a copy. When I get it, you will see it here very soon thereafter. 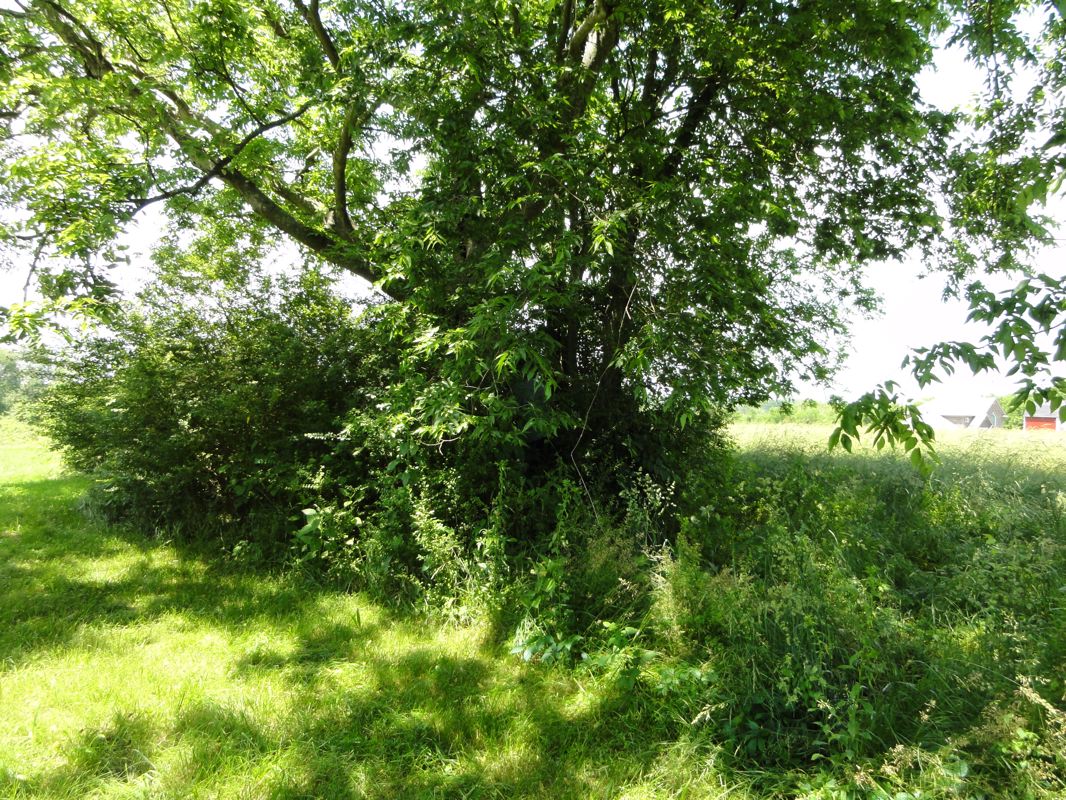 Graves In This Thicket Of Brush 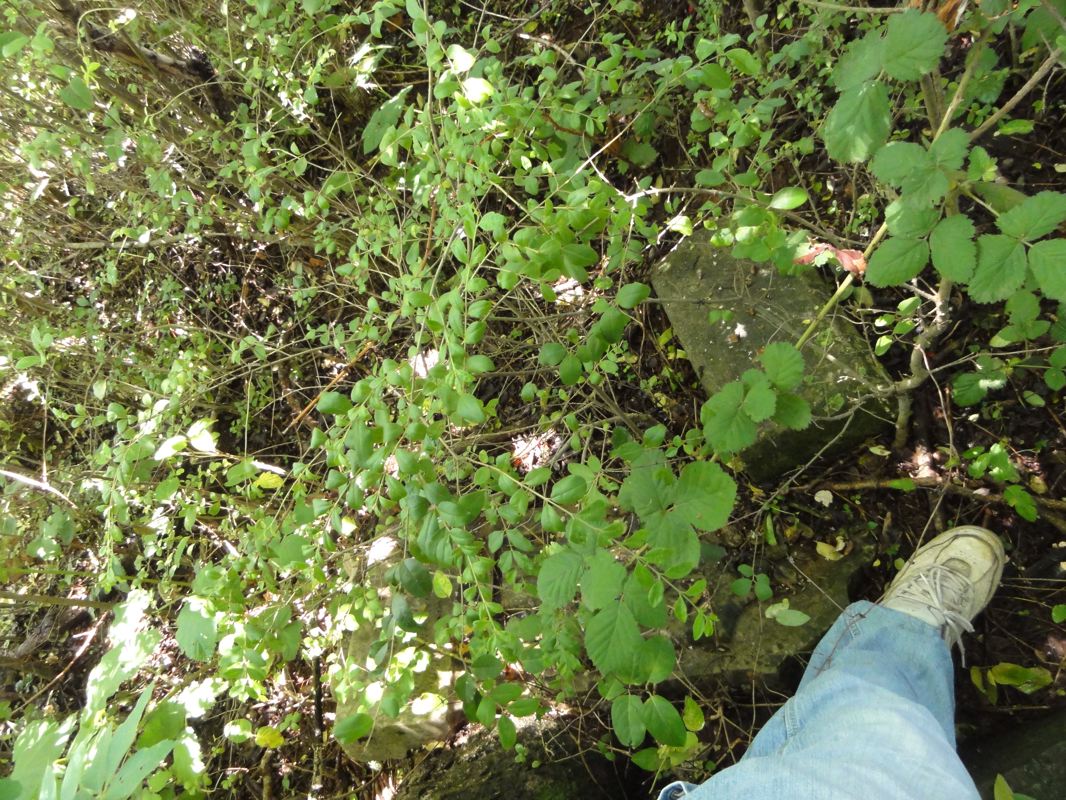 Getting Between The Trees To Make Photos Was Most Difficult 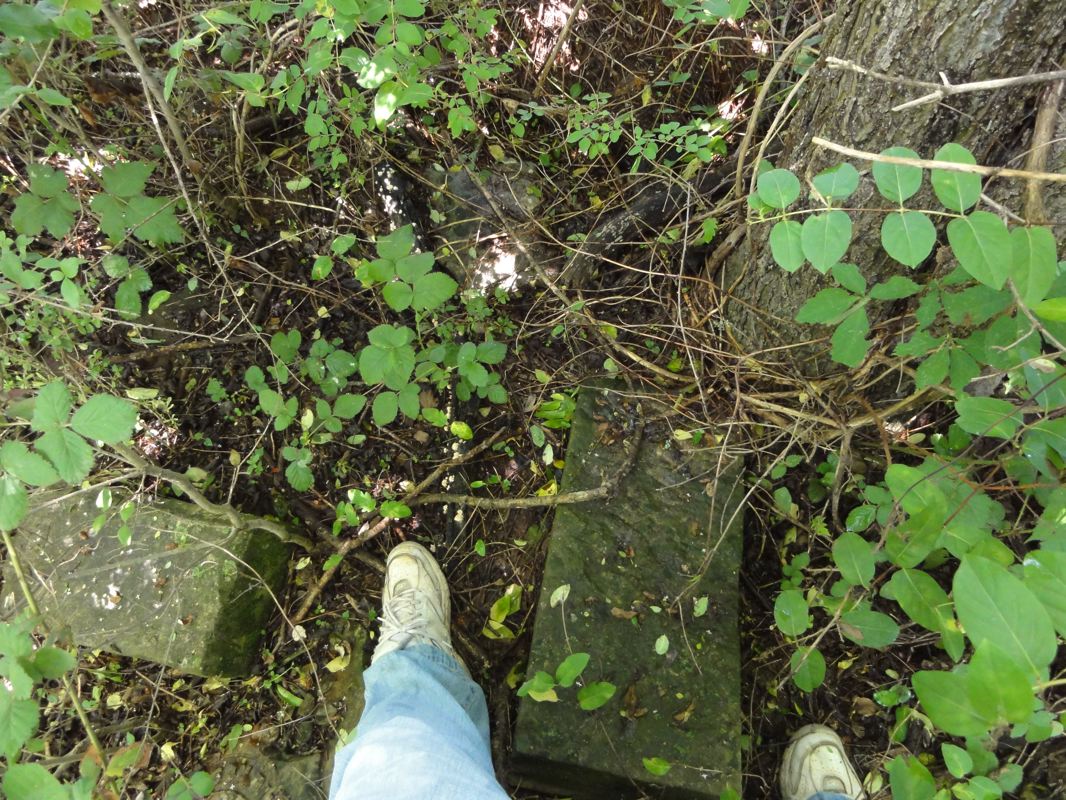 Graves Stone Stacked In Midst of Trees - Much Need For Restoration 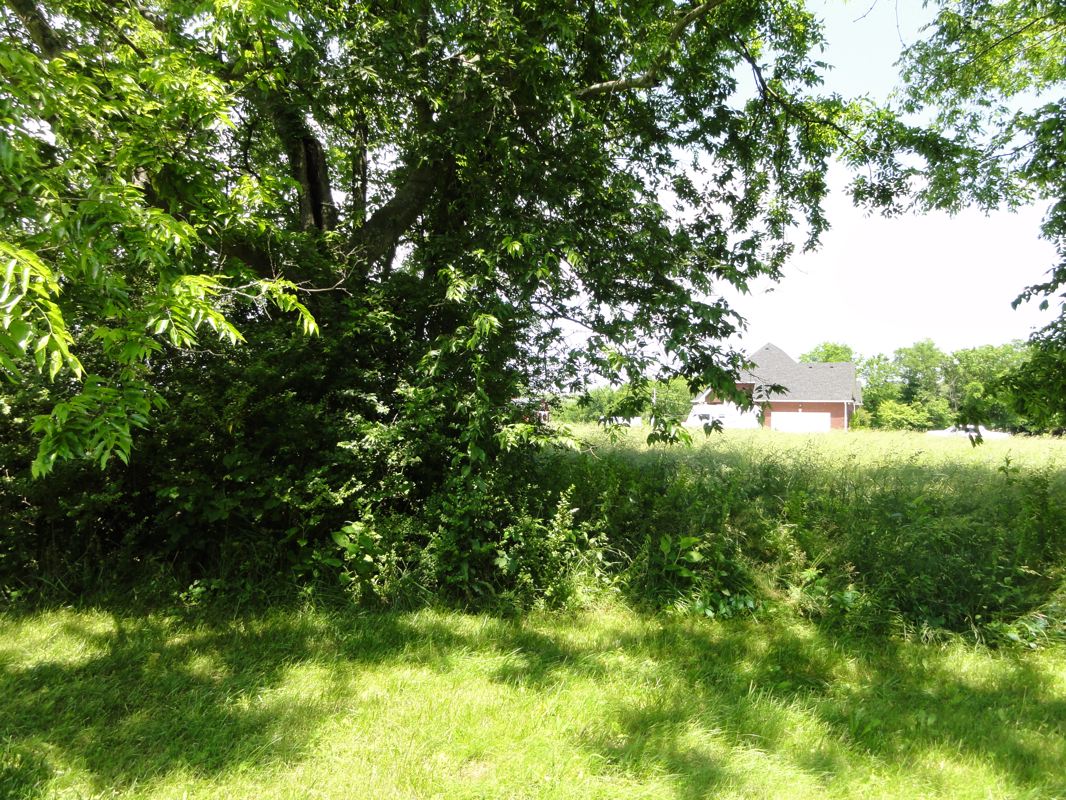 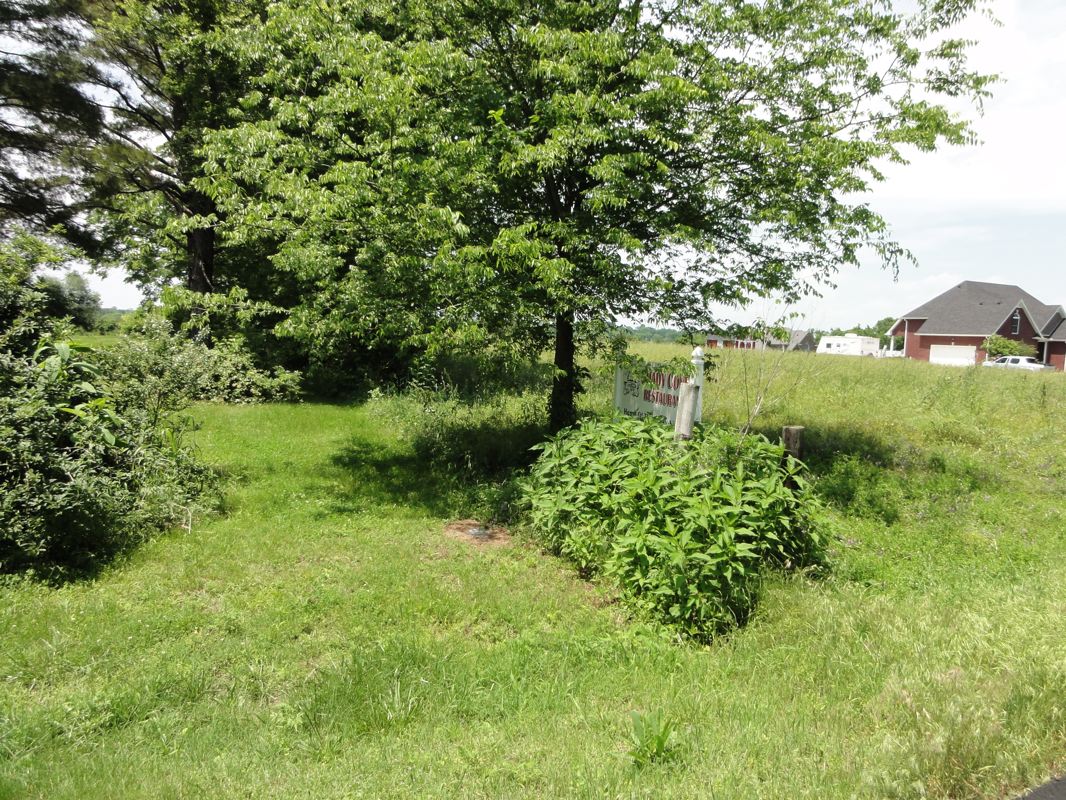 Head Down This Hedge Row To Carmack Cemetery 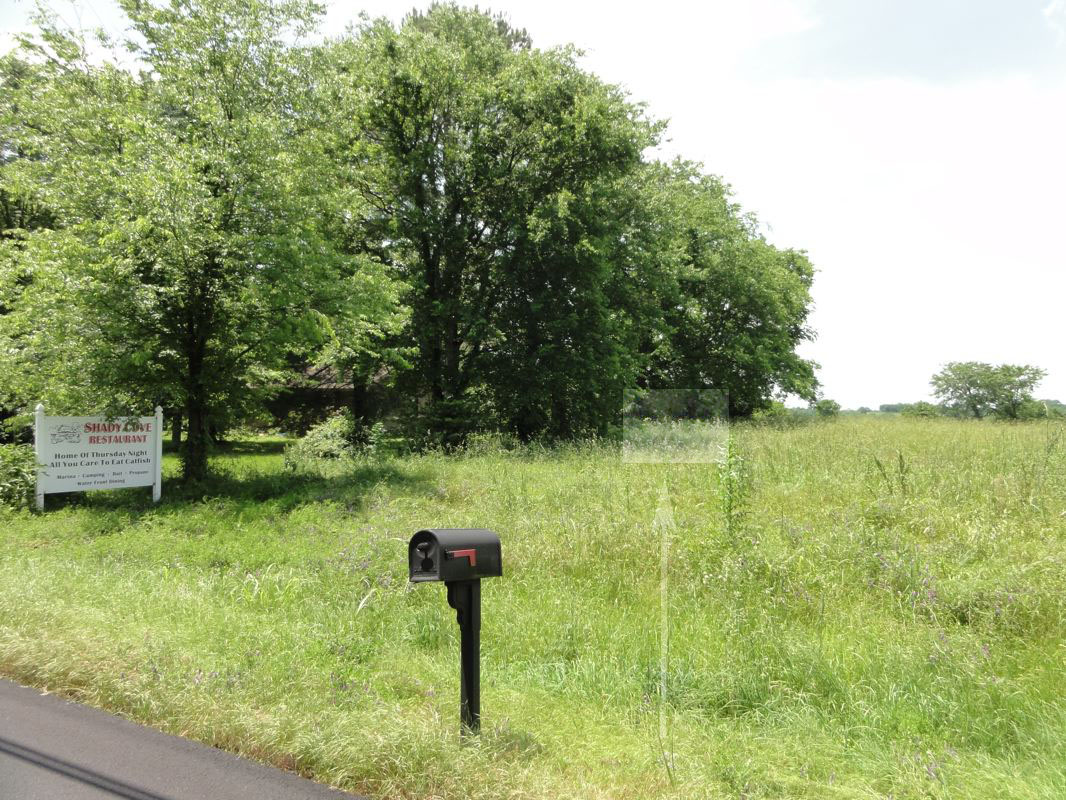 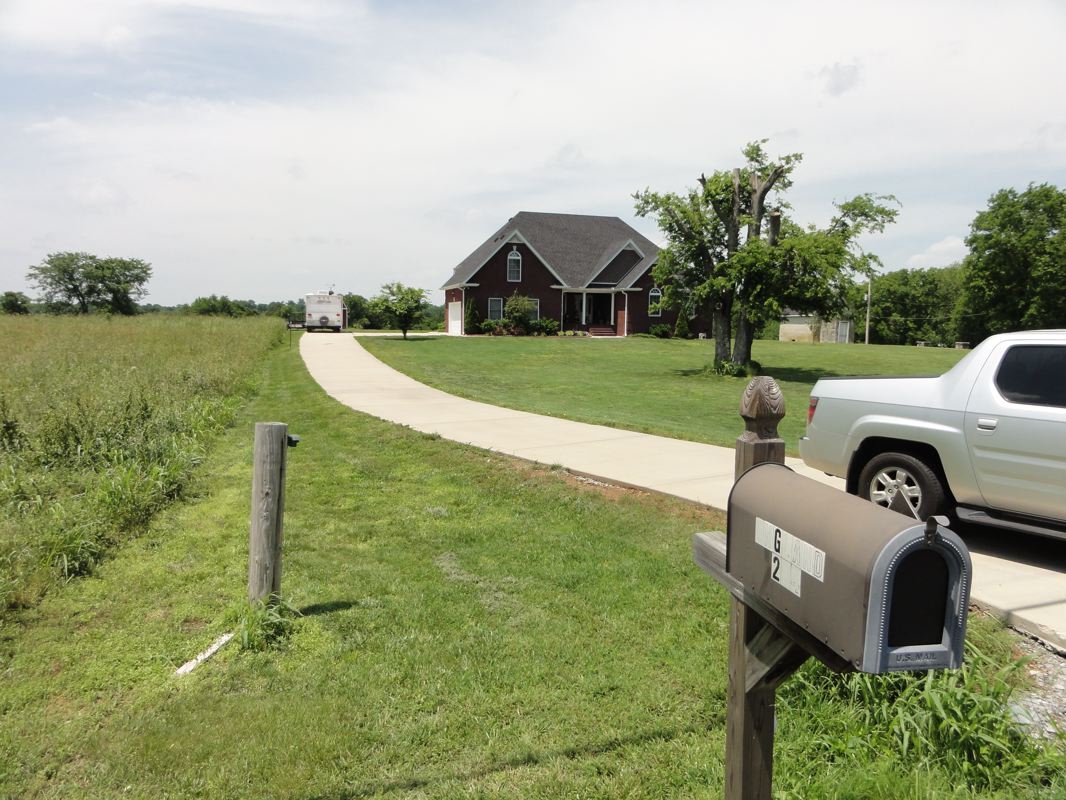 House at 204 Harsh Lane - Next to Carmack Cemetery
When Last Visiting in 2004, there was a beautiful old farm house here. The house is gone, and this new house
was built in its place. 06.2011 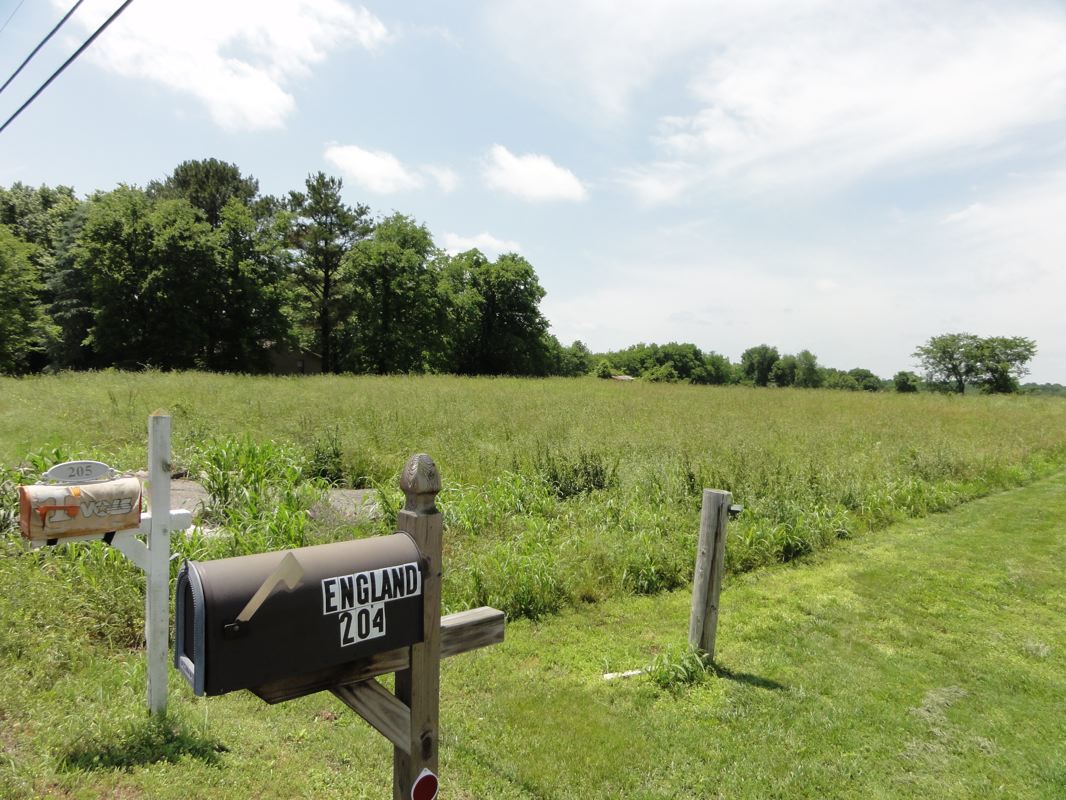 Photos Supplied in 2017 By Land Owners

In June of 2017 we received some photos from the Kasper family, owners of the property where the Harlan/Carmack Cemetery is location. They had been doing some restoring of the old cemetery adjacent to their home. Some photos below show the grave markers they uncovered. Comparing to the photos above, it is extremely pleasing to see the kind of success they are having in the restoration of this old North Tennessee Cemetery. Special thanks to Donna K. Kasper for providing these wonderful examples of she and her husband's efforts. 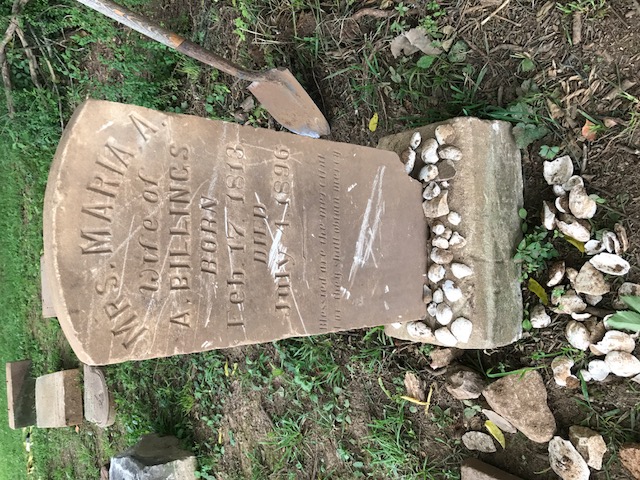 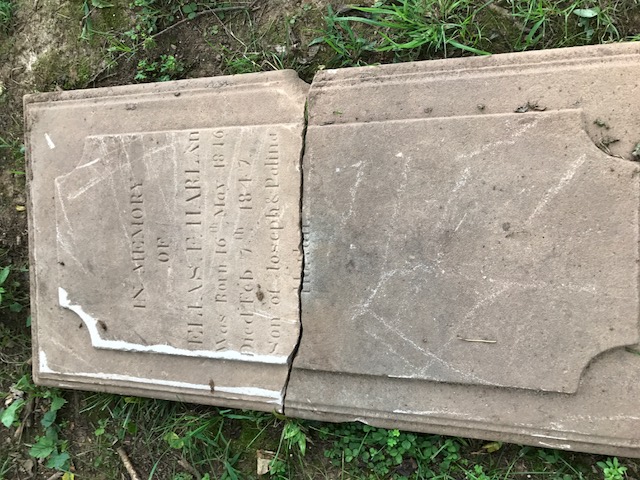 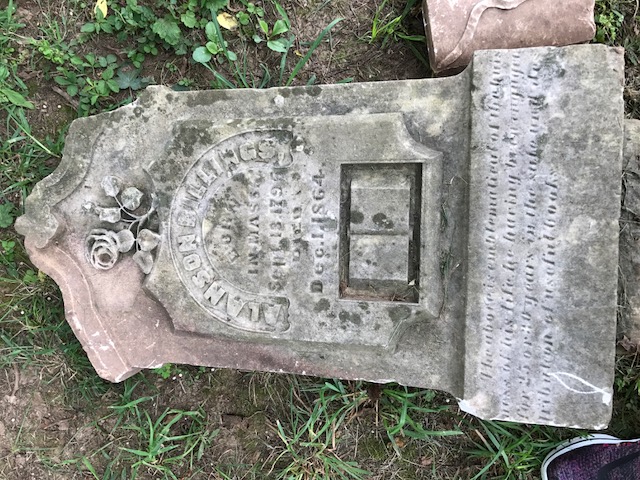 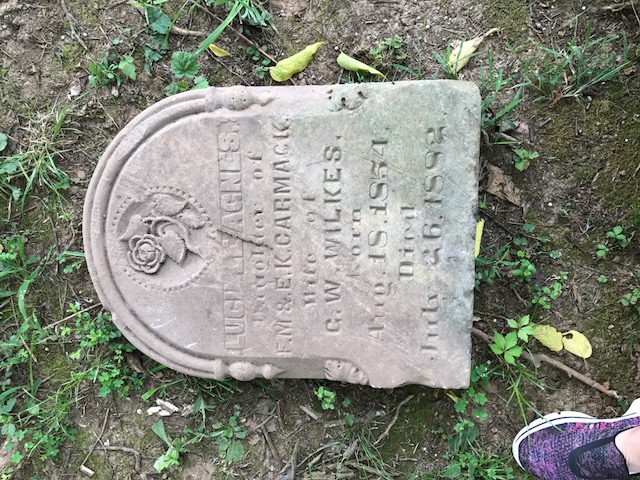 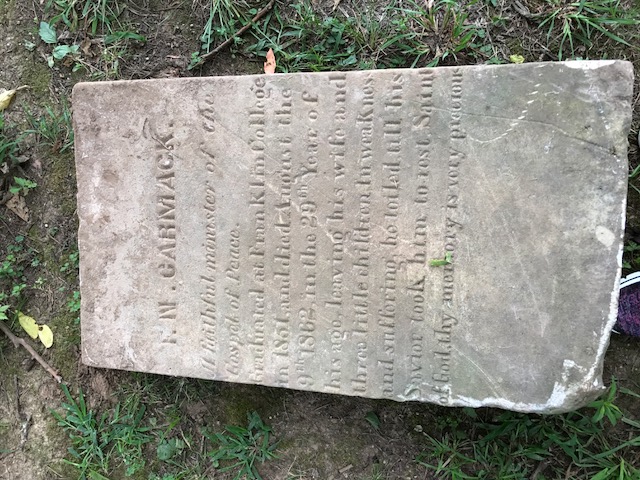 F.M. Carmack
A faithful minister of the gospel of peace.
Graduated at Franklin College
in 1851, and died August the
9th, 1862, in the 29th year of
his age, leaving his wife and
and three little children in weakness
and suffering, he toiled till his
Savior took him to rest. Saint
of God, thy memory is very precious

Special Thanks to C. Wayne Kilpatrick, Tom L. Childers for photos of this site. A visit to the cemetery took place in May, 2011 when these photos were taken. It is most heart-rending to know that this cemetery is in such need of repair.
Your web editor was by in 2004. The landowners spoke of plans then to restore the cemetery, but it has not taken place yet. Hopefully in the near future someone will take on the project.