Biographical Sketch On The Life Of W.H. Fleming

Among the list of preachers who have suffered and sacrificed for the church of our Lord in the mountains of Tennessee may be found the name of William Harrison Fleming. He was born in Overton County, Tennessee, June 11, 1835, and spent most of his life in his native county. He had the example of the Sewells to inspire and encourage him, as they were natives of his county. Young Fleming grew to manhood surrounded by the simple life of a simple community. His community, being in the rural section in his county, furnished but few opportunities for the culture and polish that a classical education gives. While he was deprived of such advantages, yet he grew up amidst a people whose rugged traits of character were very pronounced. They were honest, truthful, frugal, and industrious. They were just such people as may be found in the rural sections where real men and women are developed.

At the age of twenty-four young Fleming married Miss Martha Catherine Thomas. She was his equal in native ability and in education, and she proved to be a great help to him as a life companion. She was just such a woman as is described in the book of God as being "a worthy woman." To their union nine children were born-five boys and four girls. Brother Fleming, with the help of his good wife, carried the burden of rearing his family and providing well for each member of the family. His children were taught to revere God and to honor his truth. It is no small task to rear and train such a family. Brother Fleming was successful in this great work.

In 1861, W. H. Fleming enlisted in the Confederate Army in Company B, under Captain Joe Bilbrey, in Colonel Stanton's regiment. He was later transferred to Company D, and was made captain of that company. He continued as a soldier, holding his rank as captain to the close of the Civil War. He was reputed to be a gallant soldier who commanded the respect of his fellow soldiers and superior officers. The scenes of a soldier's life were registered vividly upon his mind, and he never forgot the hardships which he and his comrades had to endure Brother Fleming was baptized into Christ by Andrew P. Davis in 1860. He had it in heart to preach the gospel soon after he became a Christian, but the stirring times which preceded the Civil War kept him from entering at once into that great work. He began preaching in 1868, at the age of thirty-three. His good wife gave him much encouragement in this work, as she had in all other duties of life. He preached in Kentucky, Texas, and Tennessee. However, most of his work was done in Tennessee, in the counties of Jackson, Overton, Clay, Putnam, Pickett, Fentress, and White. The writer, when but a lad, had the pleasure of hearing him preach in White County. His membership was held in the congregation at Flat Creek until 1905. He then moved to Hilham, Tenn., and became a leader of the congregation there. Brother Fleming was associated with some good and tender-hearted men who had consecrated their lives to the preaching of the gospel-such men as Isaac T. Reneau, J. F. Owensby, James and William Kuykendall, H. J. Boles, and Henry Lovelady.

Brother Fleming was a farmer by occupation. He cultivated his farm and made his support for himself and family on his farm. He received very little for his preaching and expected nothing. He preached because he loved the church of our Lord, the truth of the gospel, and the salvation of souls. He studied the Bible and drew his inspiration and encouragement from the Book of books, and he preached nothing but the truth as revealed arguments were clear and forceful; his exhortations were taken from the Bible and from his own experience. His arguments were clear and forceful; his exhortations were fervent and persuasive; his zeal was ardent and effective. He did much in edifying the churches and strengthening his brethren. He knew the simple plan of salvation, and knew how to tell it to others with power and conviction. He hated hypocrisy and sham and lived the simple life of a humble child of God.

Brother Fleming worked through the week during "crop time" and preached on Saturday and Sunday. Sometimes he would ride horseback more than twenty miles on Sunday morning and preach twice on Sunday, and return home the same night and be ready for his farm work early Monday morning. After his "crop was laid by," he would hold meetings. It was the joy of his life to see his neighbors and fellow countrymen respond to the gospel invitation and give their lives to God. He knew how to appeal to them with the gospel invitation. He was earnest and fervent in his appeals to them to become Christians. Brother Fleming baptized hundreds of people, and is said to have married more couples than any other preacher in that part of the country. He lived a useful life and gave his services freely and gladly to his people and to the church.

W. H. Fleming started life as a poor man; he made a living for himself and family and gave a liberal portion to others in helping them preach the gospel; he trained his family, and all his children became Christians; he paid his debts and preached the gospel to the poor; he lived a godly life, and died on July 11, 1910. Services were conducted by Marion Harris and J. P. Watson. His body was laid to rest in the family cemetery on Flat Creek, Overton County, Tennessee, to await the great and notable day of the Lord.

Webmaster's Note: Flat Creek was also the home of B.C. Goodpasture. Many of his relatives, including his parents are buried here. The church where Fleming preached, and the cemetery adjacent to it where he is buried, was the church in which Goodpasture grew up. Not only did Goodpasture grow up attending there, but the school he attended was also in the church building. The old building is now dilapidated and abandoned, but is a simple reminder of where much work was done in that part of Tennessee many years ago. See pictures of this old building as it looked when I visited it September 5, 2003, here!

Directions To The Grave Of W.H. Fleming

William Harrison Fleming is buried in the Flat Creek Cemetery #2, a few miles west of Livingston, in Overton County, Tennessee. From I-40 between Nashville and Knoxville take Exit 288 Livingston/Sparta Hwy. 111. Go north on Hwy. 111 for 19.1 miles. As you enter into Livingston turn left on Hwy. 85. Travel 3.9 miles past the Flat Creek Church of Christ. and turn right on right on Flat Creek Rd. (just before Flat Creek Bridge.) (When you turn, Flat creek goes to a hard left and then around the creek bed. Go out the road .7 miles and turn right on Meadows Road (gravel). From this turn go .3 miles and the cemetery and old Flat Creek Church of Christ building will be on your right. 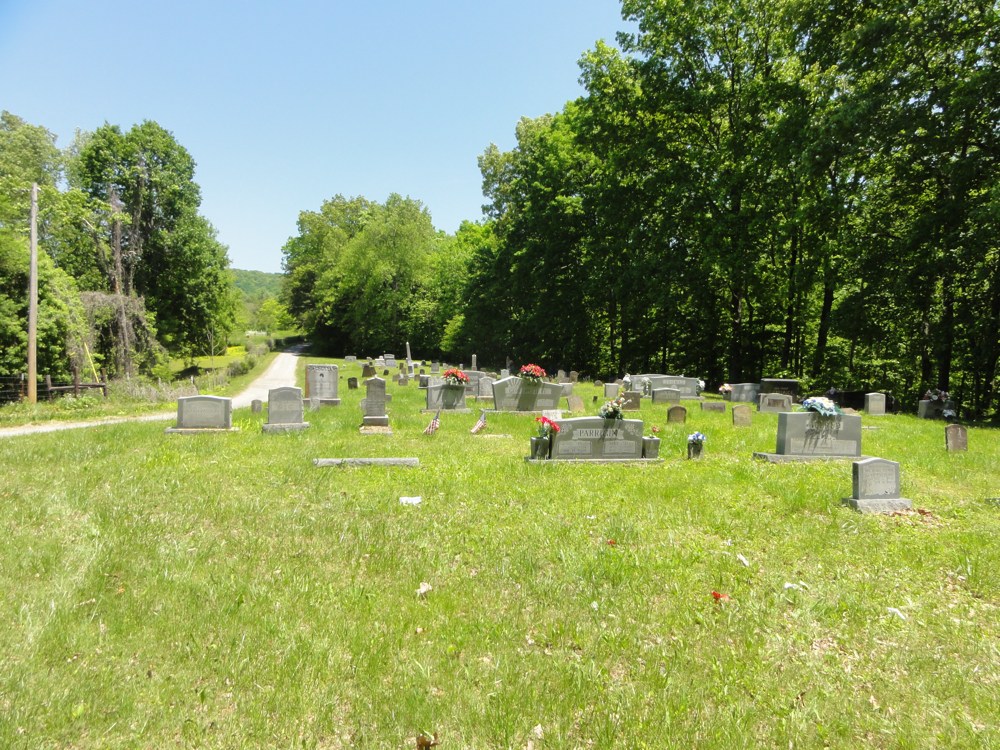 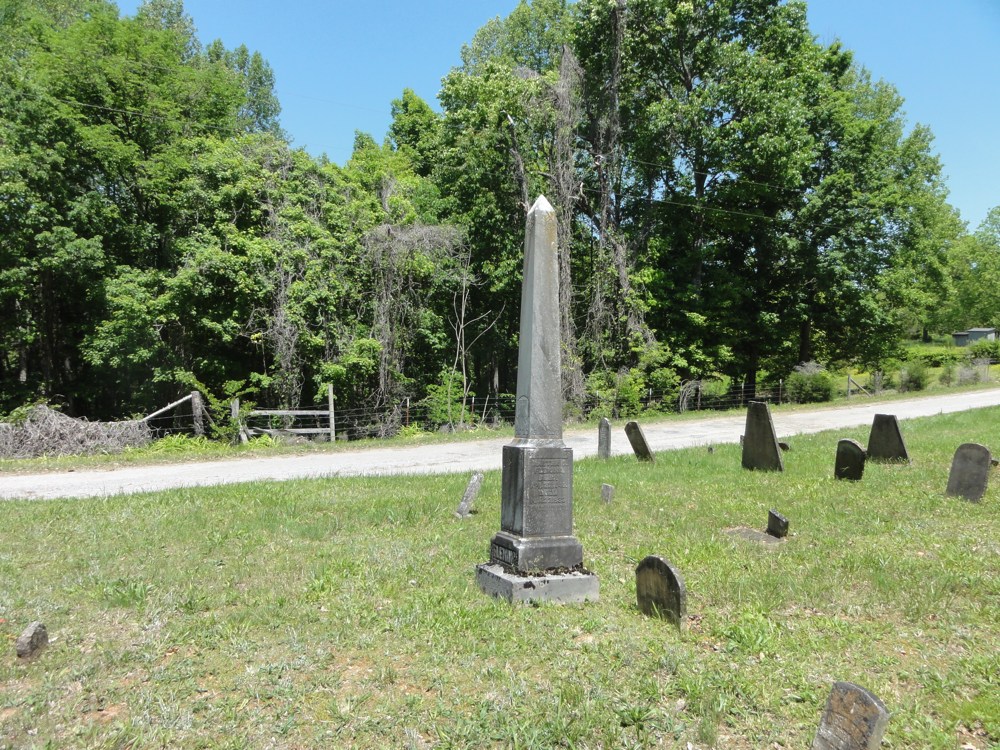 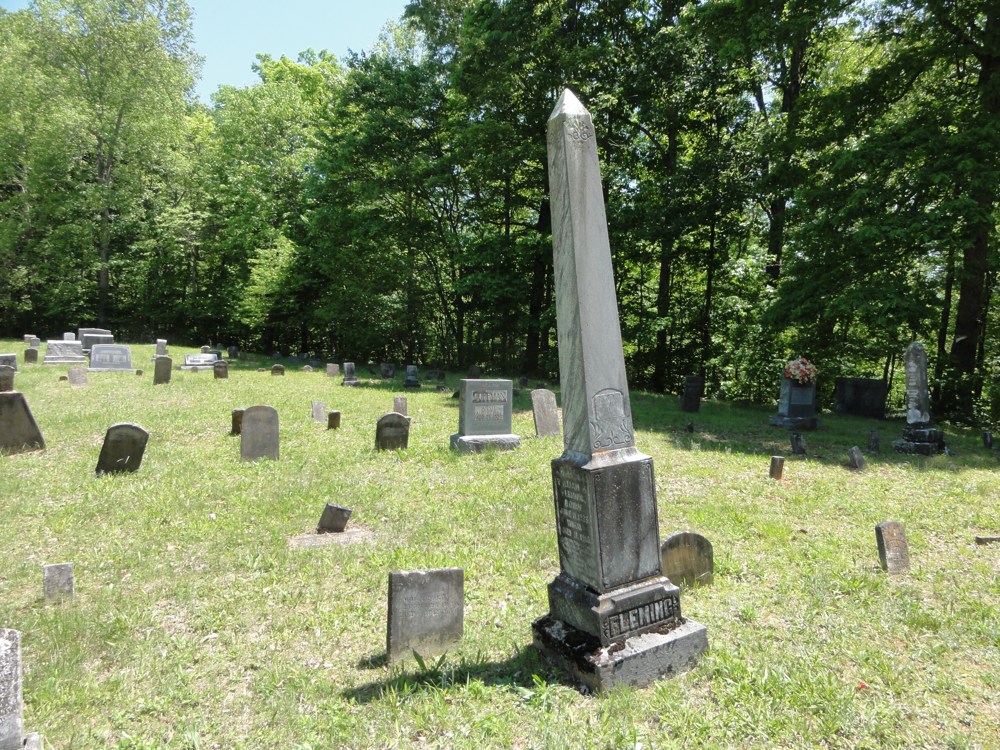 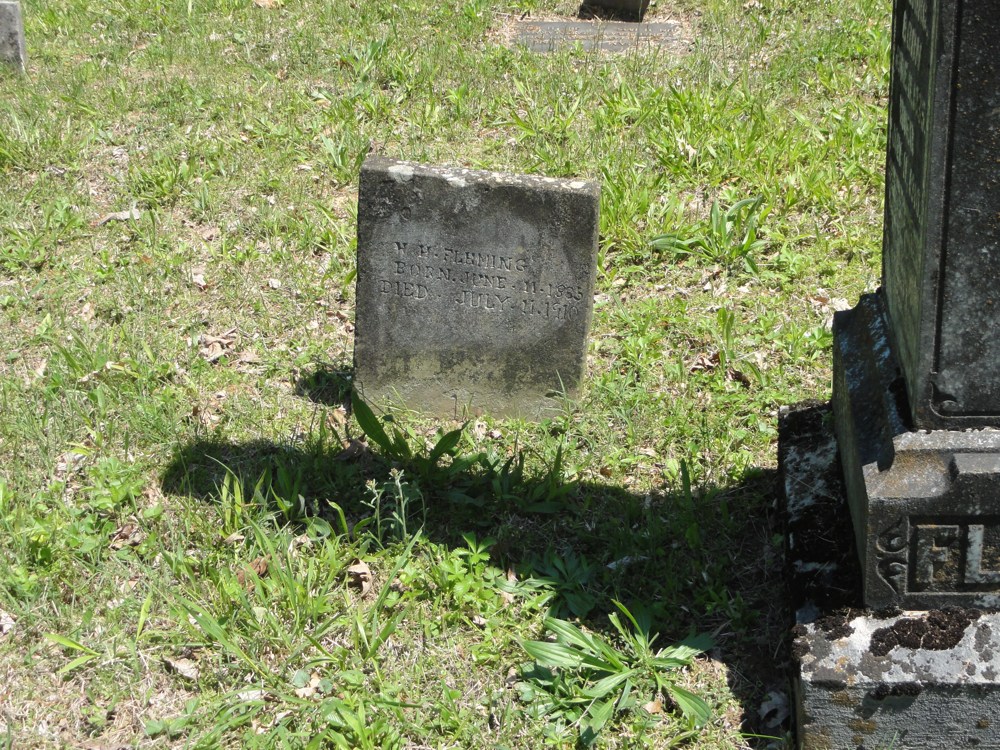 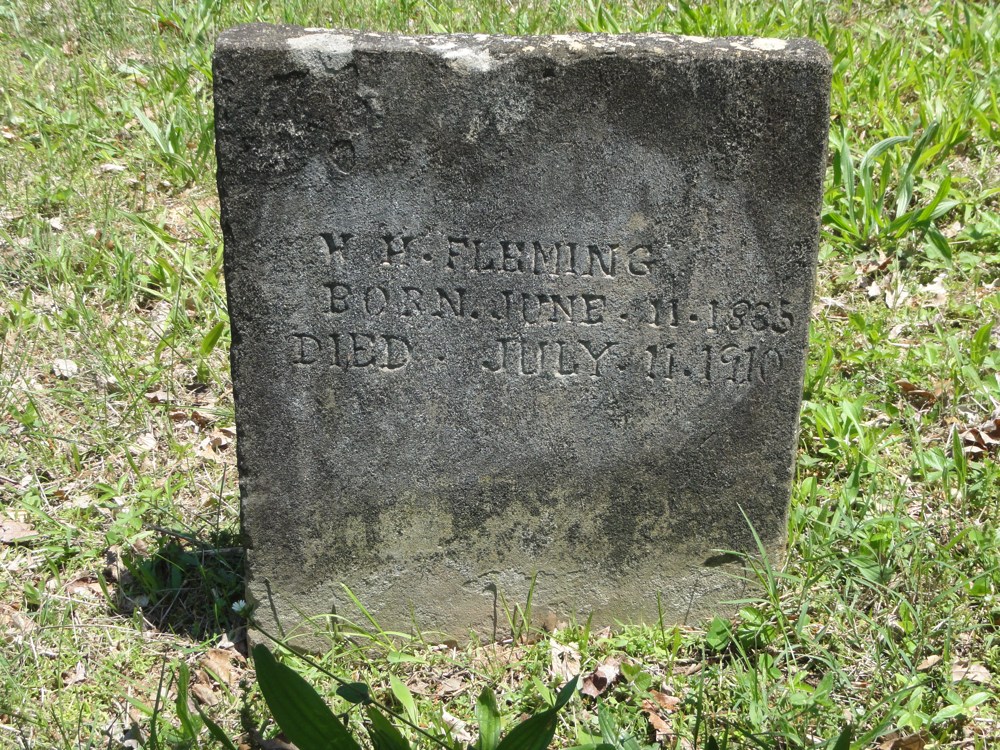 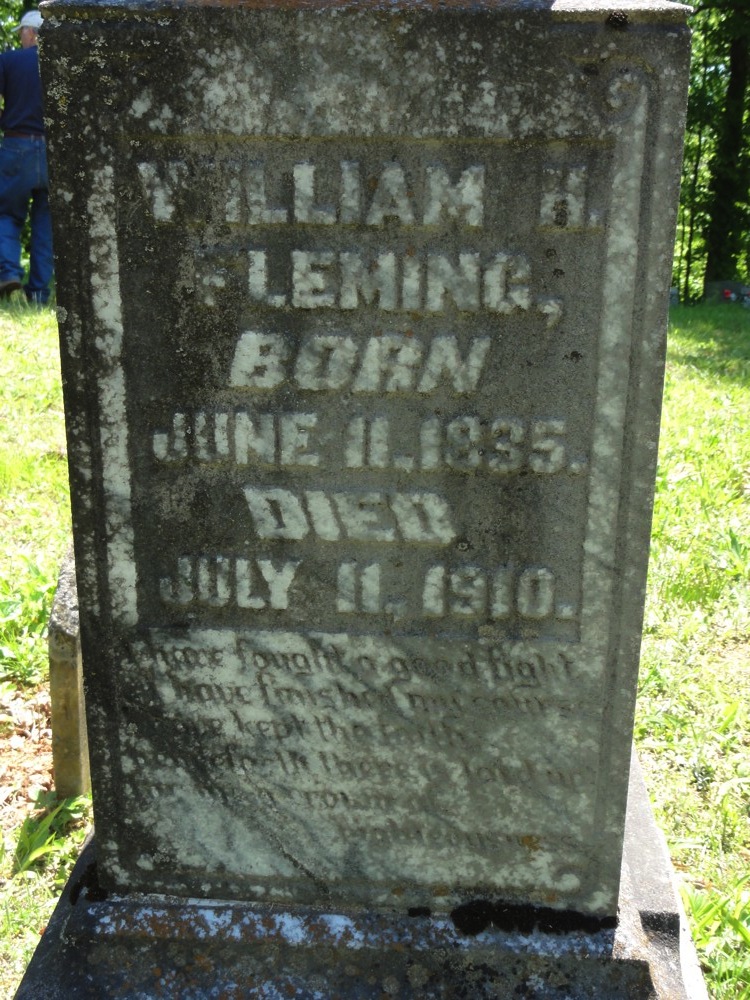 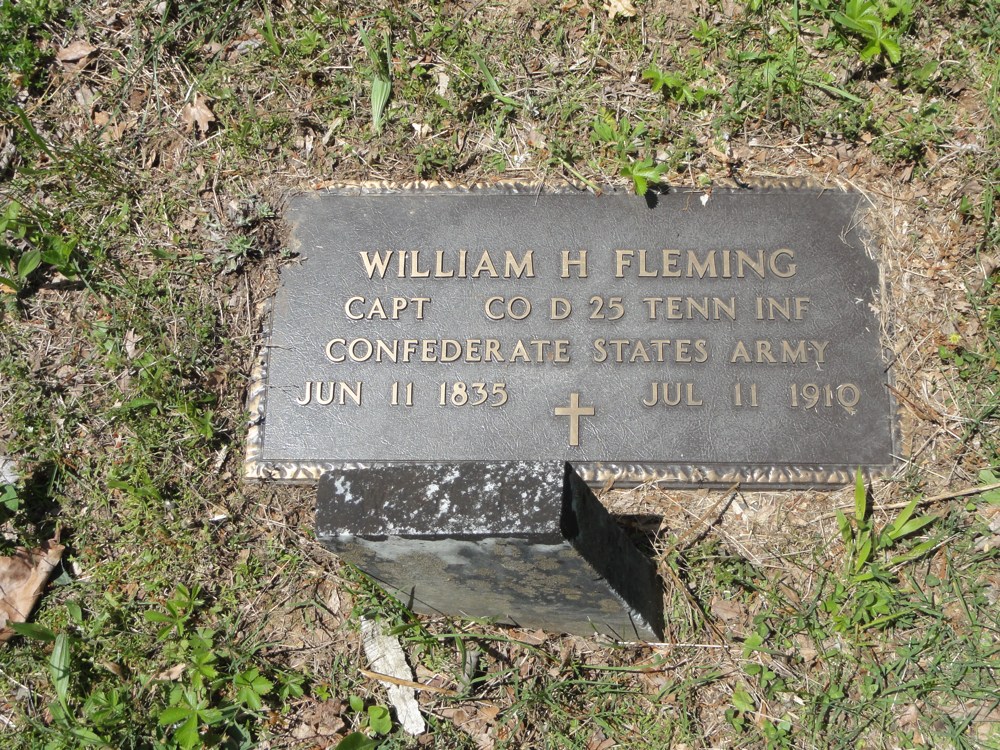 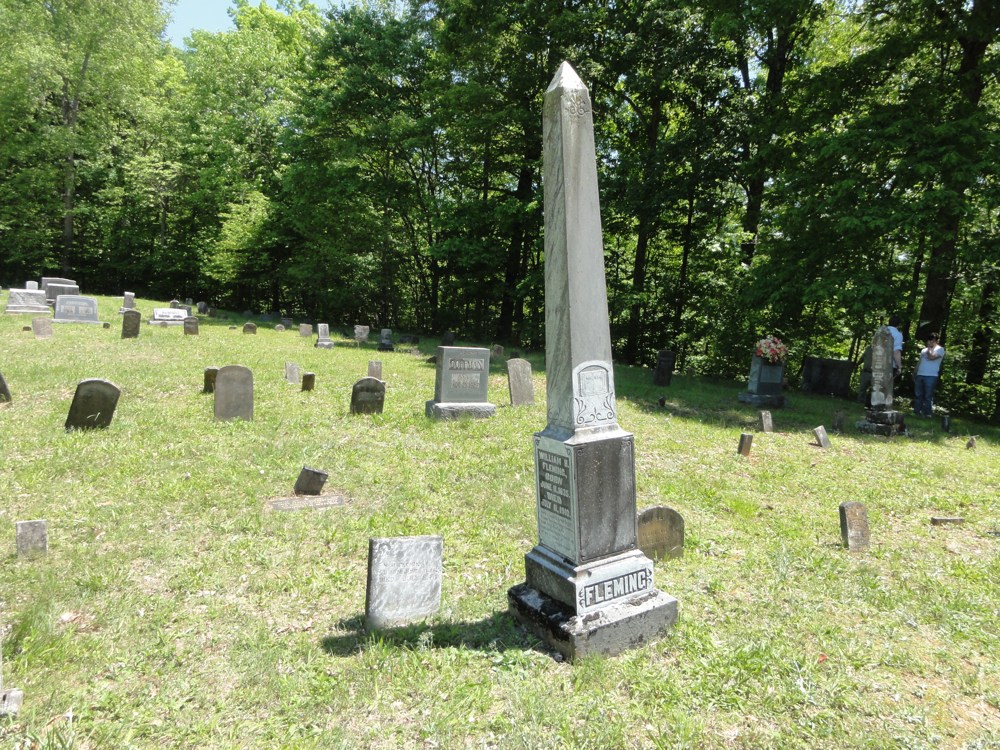 Blessed Are They That Die In
The Lord From Henceforth
Thus Saith The Lord
That They May Rest From
Their Labours, And Their Works
Do Follow Them 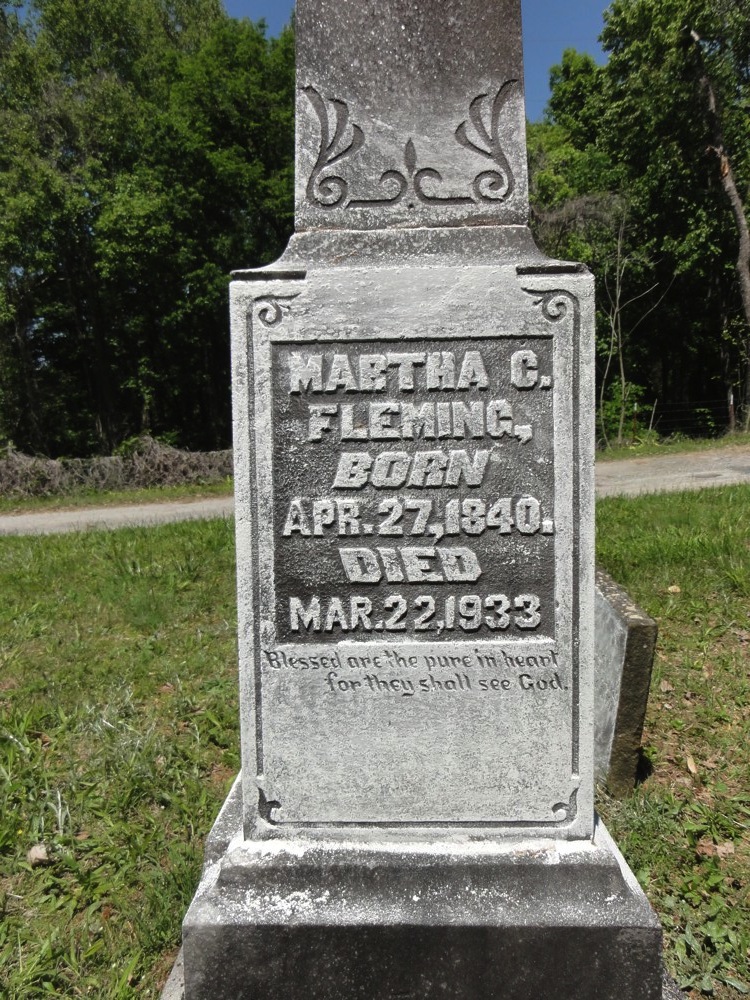 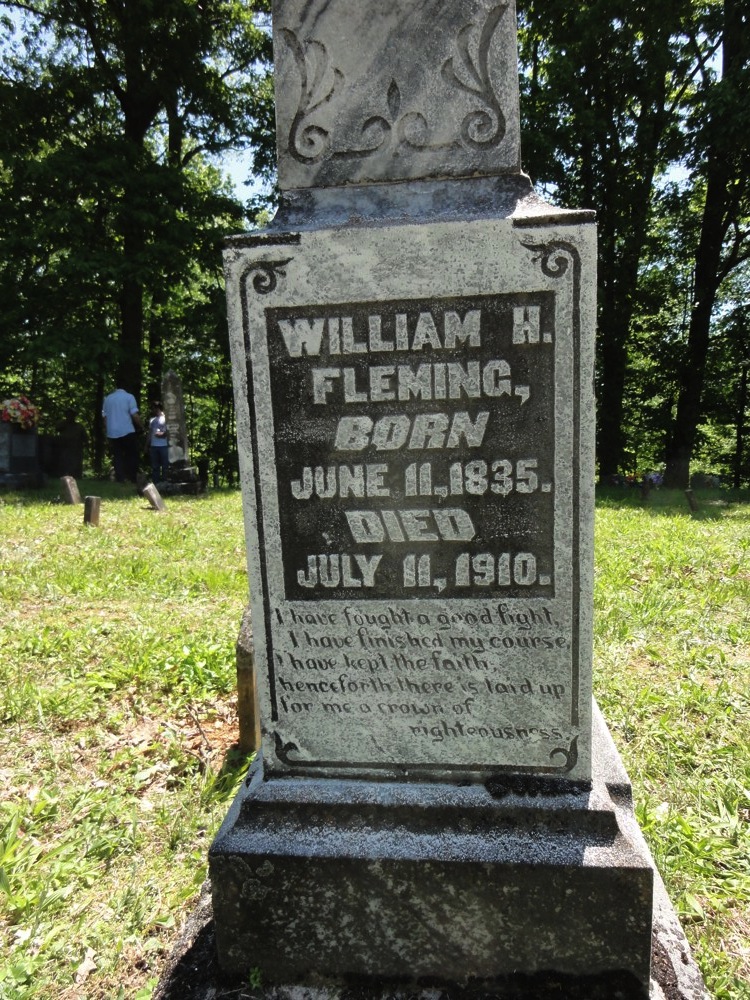 William H.
Fleming,
Born
June 11, 1835
Died
July 11, 1910
I have fought a good fight,
I have finished my course
I have kept the faith
henceforth there is laid up
for me a crown of
righteousness. 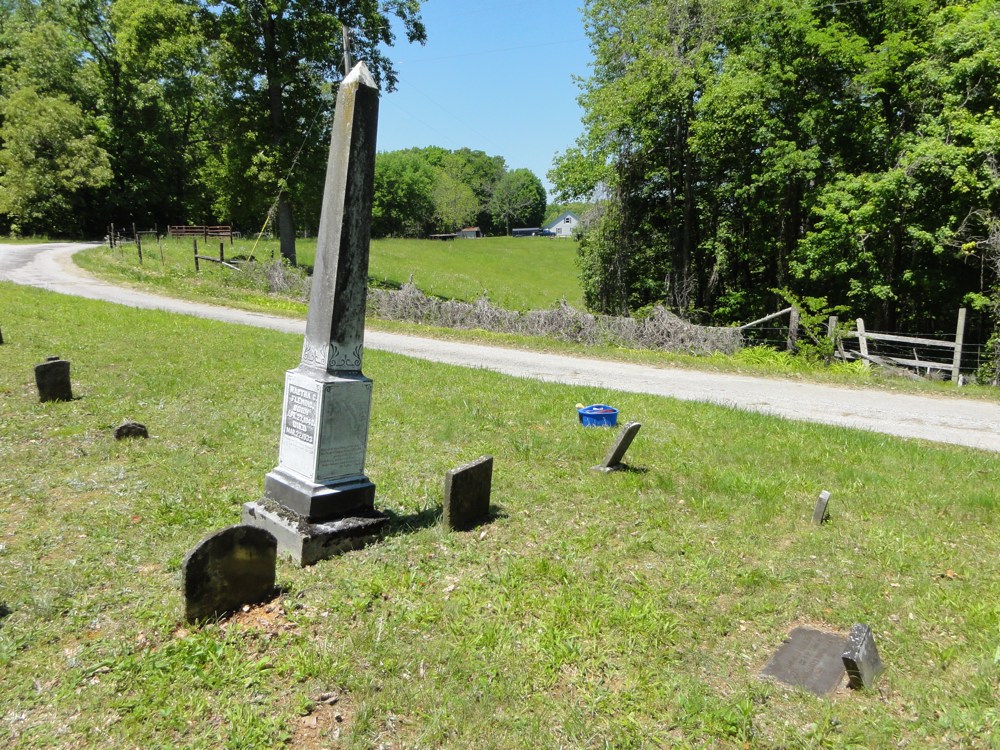 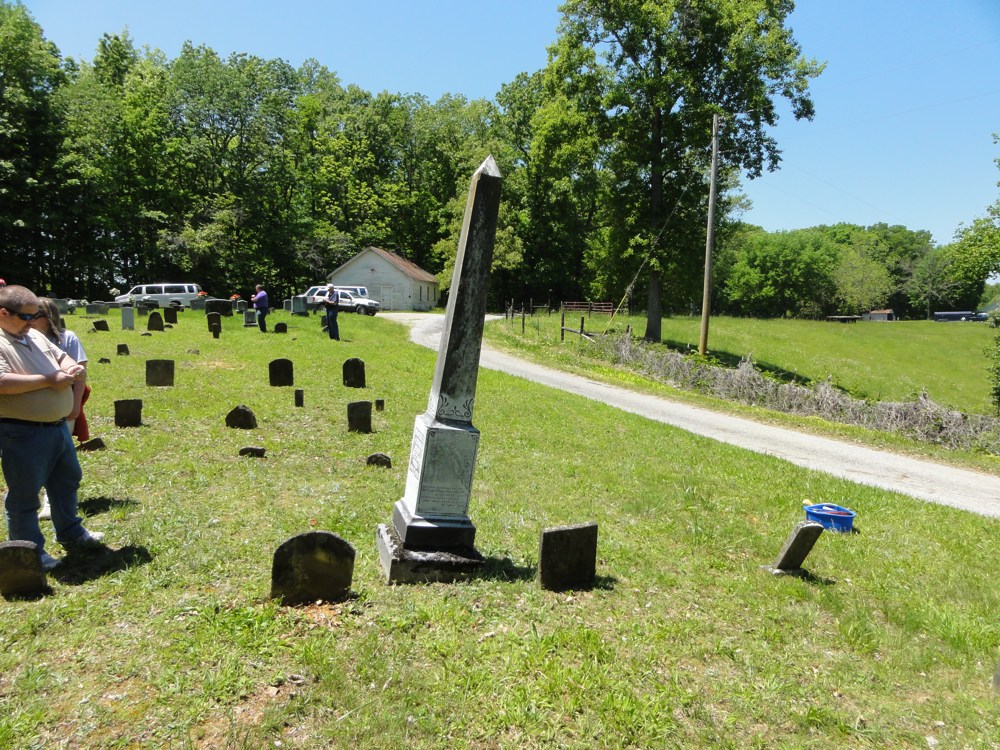 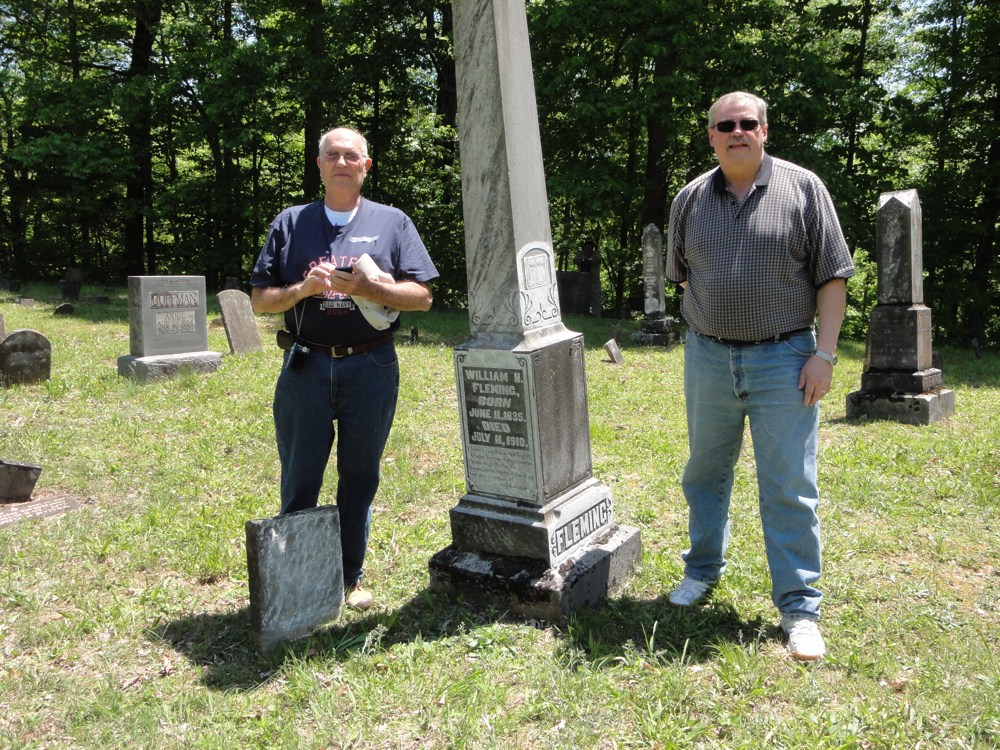 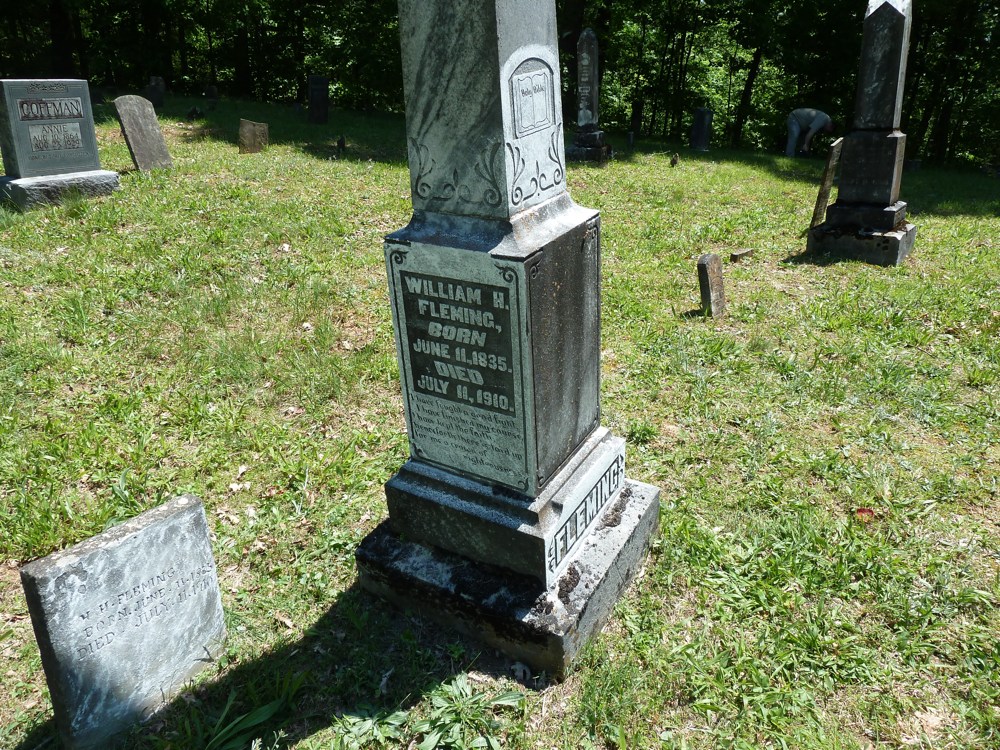 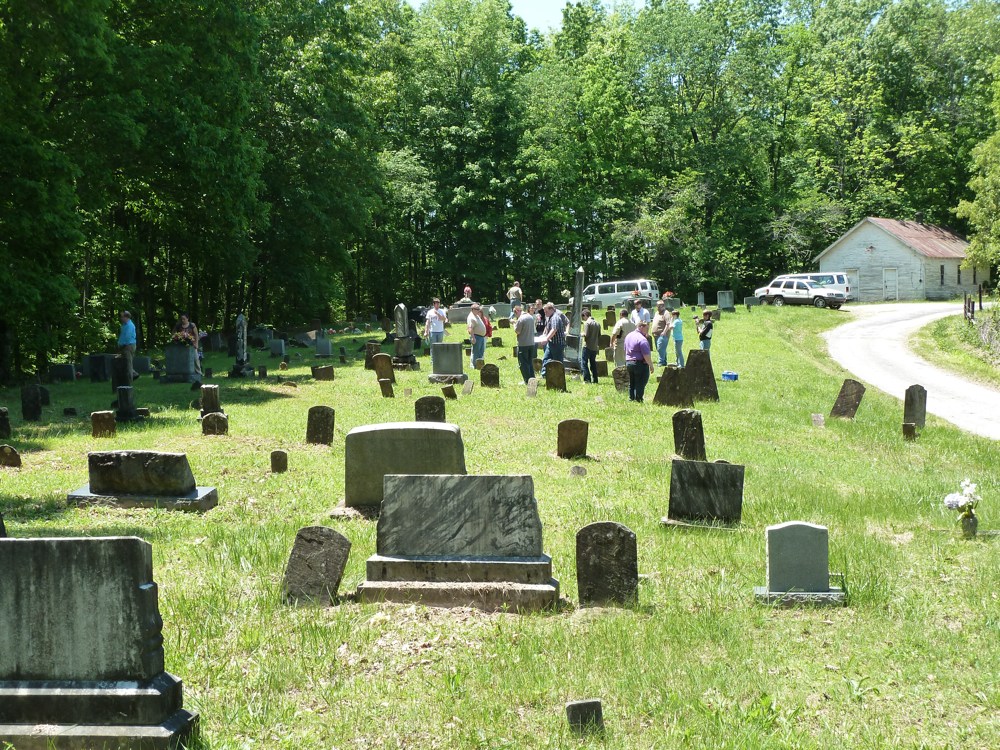