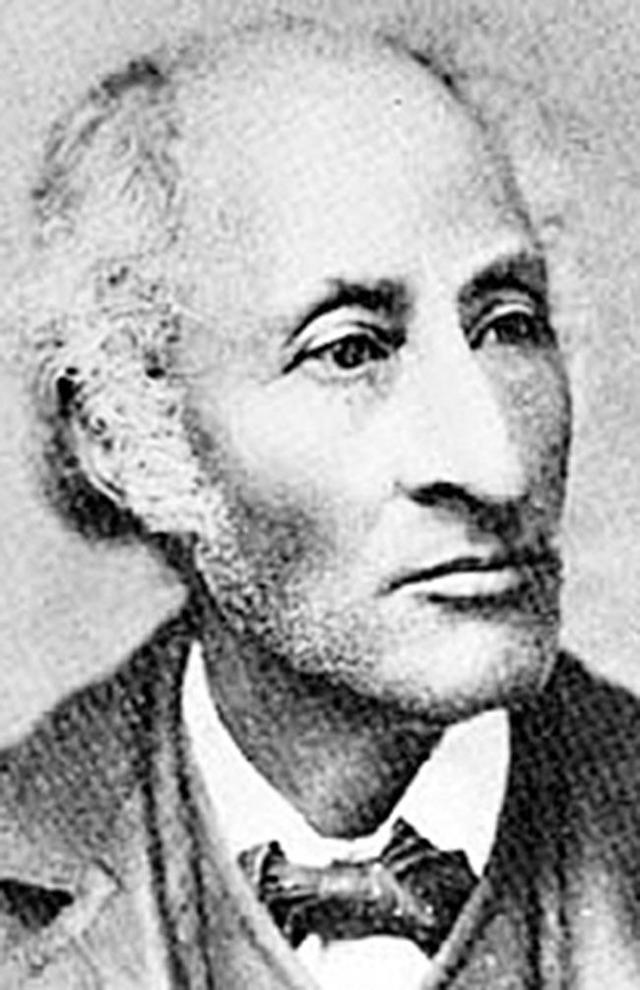 The Life and Work Of Dr. Hezekiah B. Hankal

As his father died when he was three years old, Hezekiah was reportedly taken in by a “German family in Boones Creek” (Robert Houk, Johnson City Press, 02.07.2021). Boones Creek was a small community just north of Johnson City. A differing report says he was raised in the “Dutch home of James and Nancy Hankel in what is now Gray, Tennessee.” (https://leadlhs.org/history/) Outside assistance in his rearing seems plausible as it would have been most challenging for his mother to nurture a dozen children independently. He continued to be close and supportive of his mother for the remainder of her life. According to the 1850 U.S. Census, he was twenty-four years of age, living with Margaret Hankle(sic), who was sixty-seven. She would live another eleven years. His profession was labeled ‘laborer.’

Assuming his formative years were at Boones Creek, this undoubtedly what led him to be in contact with the Christian Church there. Boones Creek church of Christ was founded in 1833. This church later became known as one of the mother congregations of the Disciples Movement in the area. “The church records give the names, among many who held their meetings, of Ashley S. Johnson, J. D. Hamaker, T. W. Masters, A. T. Myhr, W. H. Book, William C. Maupin, and R. E. Elmore. The following ministers went out from this church, Boone's Creek: Spotswood Dodge, Aug. 1850. Hezekiah Hinkle (colord), Feb. 17, 1866; William C. Maupin, Aug. 17, 1867; A. C. Maupin, son of Wm. C. Maupin, and John Preston Ellis, a nephew of Wm. C. Maupin.” (J.W. West’s Sketches of Our Mountain Preachers. page 288).

Going out from his home church, he immediately demonstrated an evangelistic zeal. Within a year, he planted two congregations, one at Jonesboro, Tennessee, and the other at Bristol. At Jonesboro, a log cabin was built. Today that work still stands at 701 Depot St. and is  Bethel Christian Church. Within three years, he had purchased a property in Johnson City on West Main St. and founded the West Main church. Initially called the Colored Christian Church, in later years, it was designated West Main Street Christian Church. A brick building was built in 1889, which housed the church and a school. Another work he established in Limestone was the Mt. Gilboa church. It later became known as the Washington College House of Prayer meeting in the old McAllister AME Church building at 2795 Old SR 34 in Limestone, Tennessee. It is now closed. He planted at least two other African American congregations as well.

Being raised in a diverse home, he learned multiple languages, giving Hezekiah a drive toward helping others to achieve an education. The people of his community needed spiritual healing, but they needed physical healing as well. The 1870 U.S. Census says he was forty-five years of age, and his work was that of ‘Physician.’ His wife Maria is twenty-two; one child is at home, Nancy E., two, and a live-in girl, Alice Sutherland, is twelve. One other note of interest about the 1870 Census is that apparently, his neighbor was none other than James Miller, the restoration preacher who, noted to be 72 years of age, would have been a great supporter to his neighbor and friend. Dr. Hankal’s practice opened the door to assisting medically African-American people as well as the Dutch-Indian communities of the area. However, in 1873 a significant Cholera outbreak in the region led to treating white people as well. His expertise did much in helping all the people of Washington County overcome Cholera and the racial divide of his day.

It was around this time that he furthered his training, this time in the field of education. On October 6, 1873, he received Tennessee Public Schools Teaching Certificate from the Public Schools System in Washington County, Tennessee. He was authorized to teach Orthography, Reading, Writing, Mental and Written Arithmetic, Grammar, Geography, U.S. History, and Theory and Practice of Teaching. He started a school for ‘colored’ children at the West Main church building. Soon he was made supervisor among all African-American schooling in the county. In 1893 he was one of the founders of the Langston Normal School.

In 1887 Hezekiah’s educational, medical and spiritual leadership in Johnson City were so valued that the citizens elected him as one of the city’s aldermen. Having a black man on the city council spoke highly of equality in that part of an otherwise racially diverse and divided south.

In 1892, Dr. Hankal and two others, Dan Reeves and Alfred Hyder gained approval to start a new school. Located at the corner of Myrtle Avenue and Elm Street, Langston School was built, beginning a lasting tradition of education for black children in Johnson City that continued until 1965.

The nineteenth century can, at best, be described as a difficult period in American history. A bright spot was the defeat of slavery as a way of life. But the road was hard before and after emancipation for black people. Their culture enjoyed a bright glimmer of hope with the rise of Dr. Hezekiah B. Hankal. Life was not easy for him and his family, but his trust in God and his service to his fellow man testify to what people can do when uniting together.

Hezekiah laid down his mantle on June 20, 1903, at the age of 78 years, one month, and ten days. Burial followed in the West Point Cemetery in Johnson City, Tennessee. 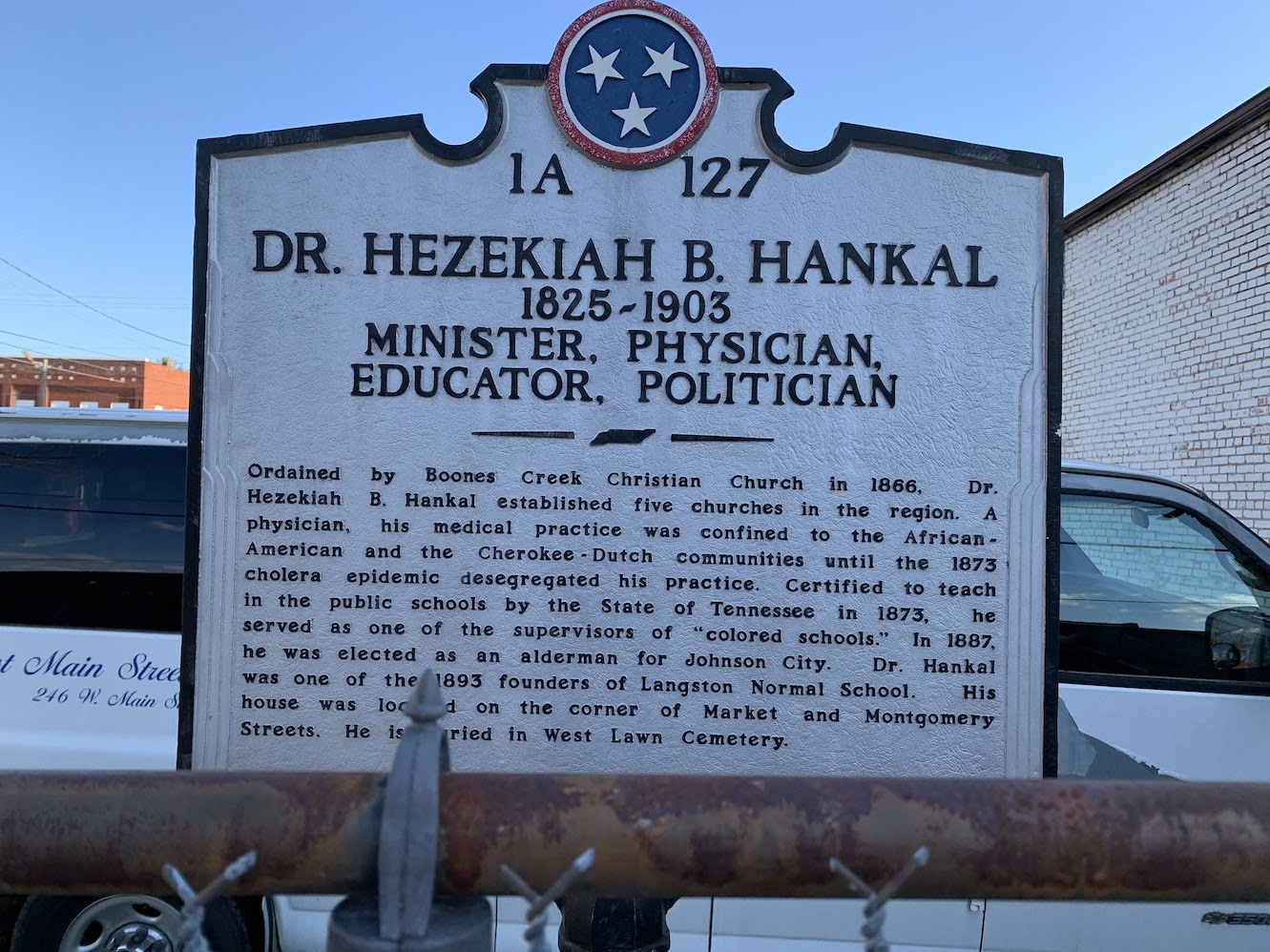 Ordained by Boones Creek Christian Church in 1866, Dr. Hezekiah B. Hankal established five churches in the region. A physician, his medical practice was confined to the African-American and the Cherokee-Dutch communities until the 1873 cholera epidemic desegregated his practice. Certified to teach in the public schools by the State of Tennessee in 1873, he served as one of the supervisors of “colored schools.” In 1887, he was elected as an alderman for Johnson City. Dr. Hankal was one of the 1893 founders of Langston Normal School. His house was located on the corner of Market and Montgomery Streets. He is buried in West Lawn Cemetery. 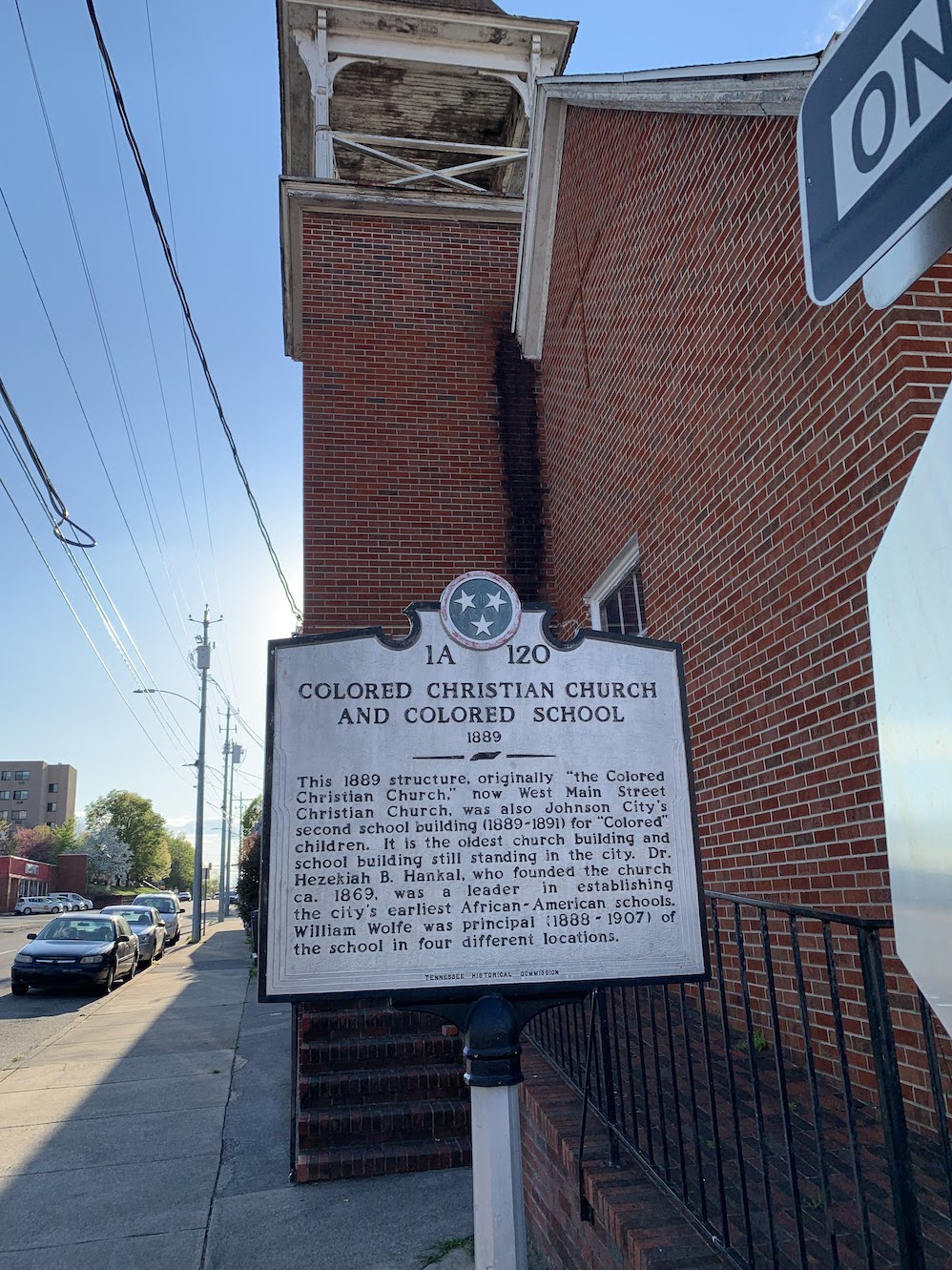 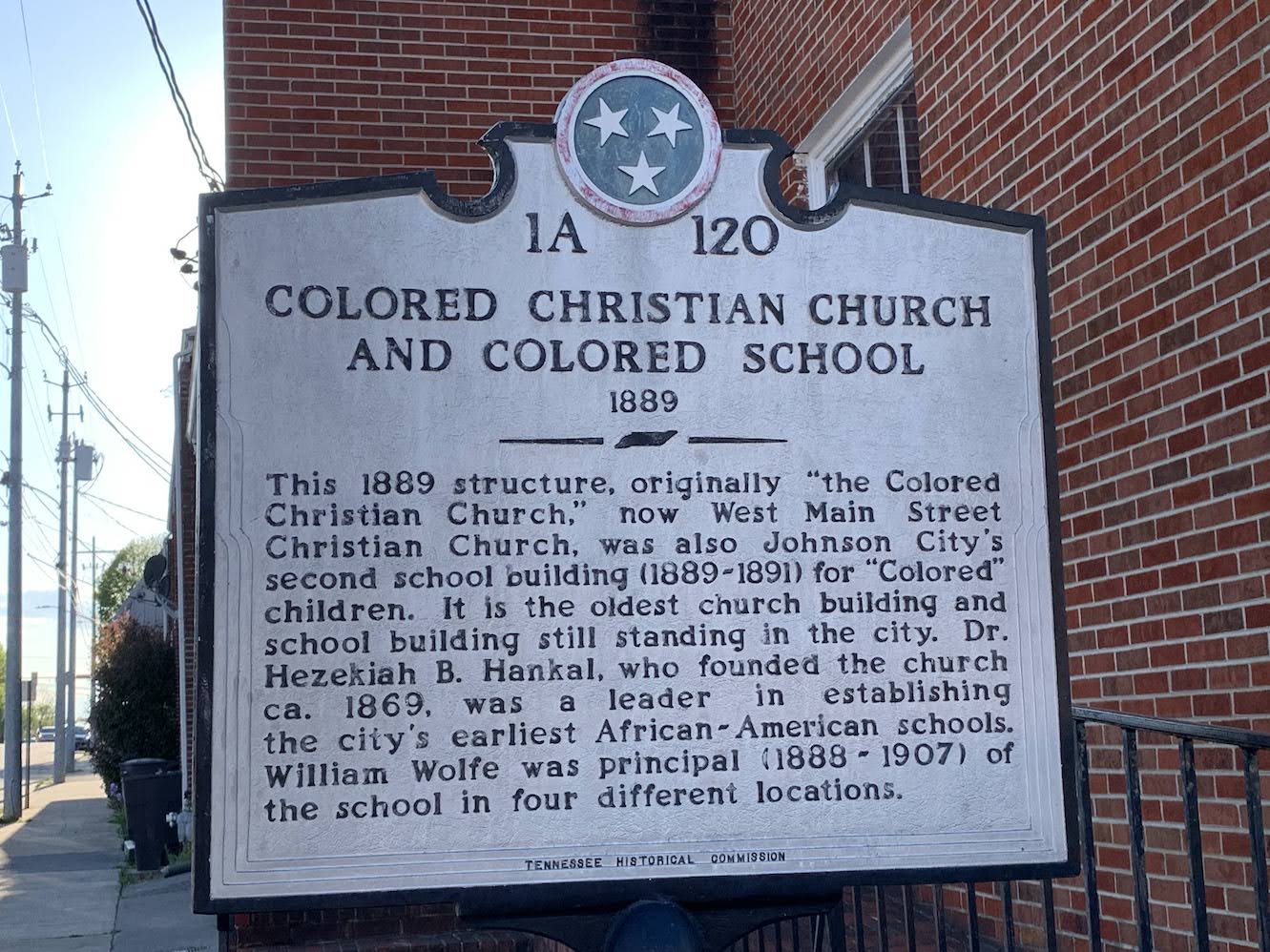 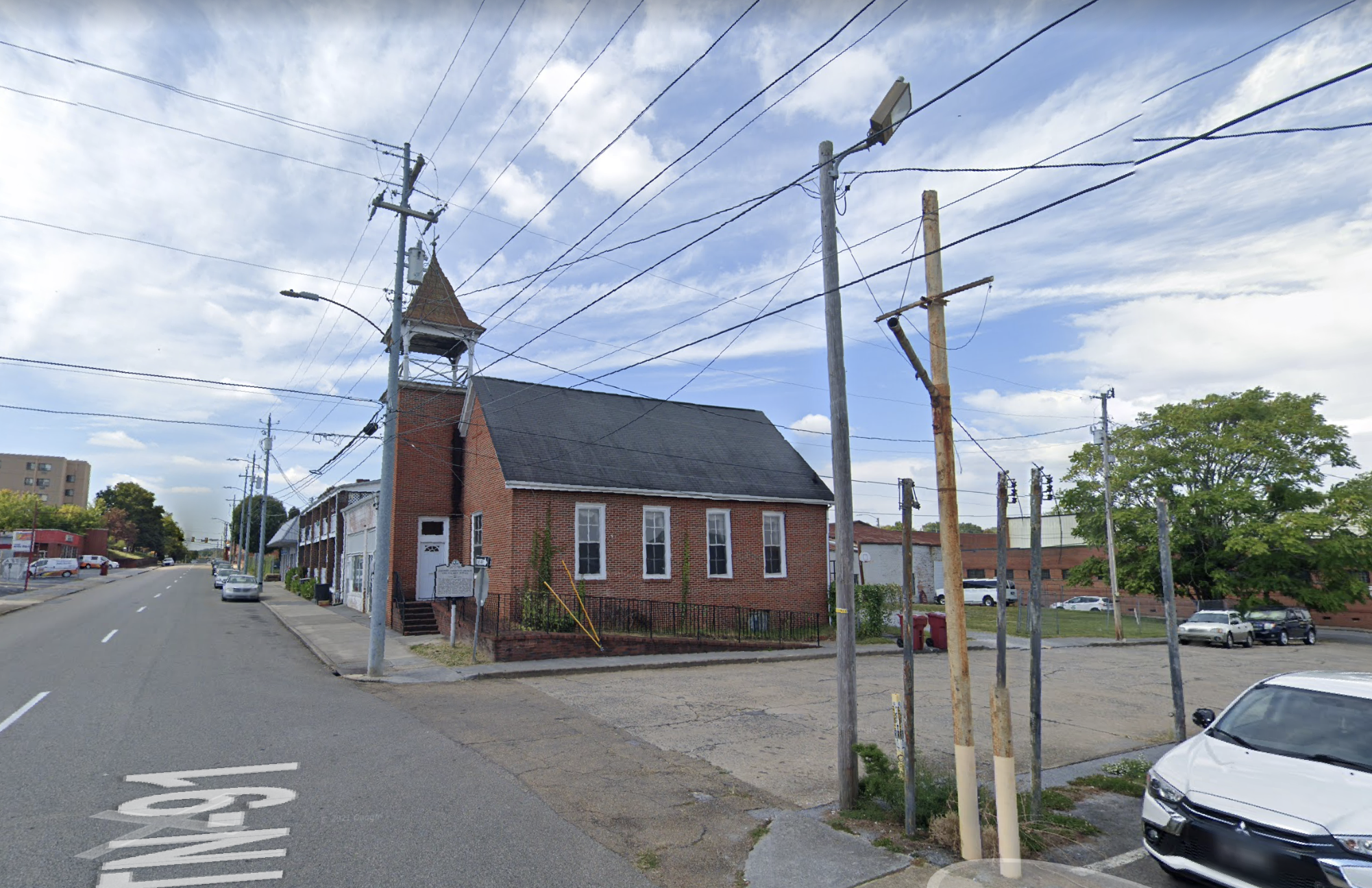 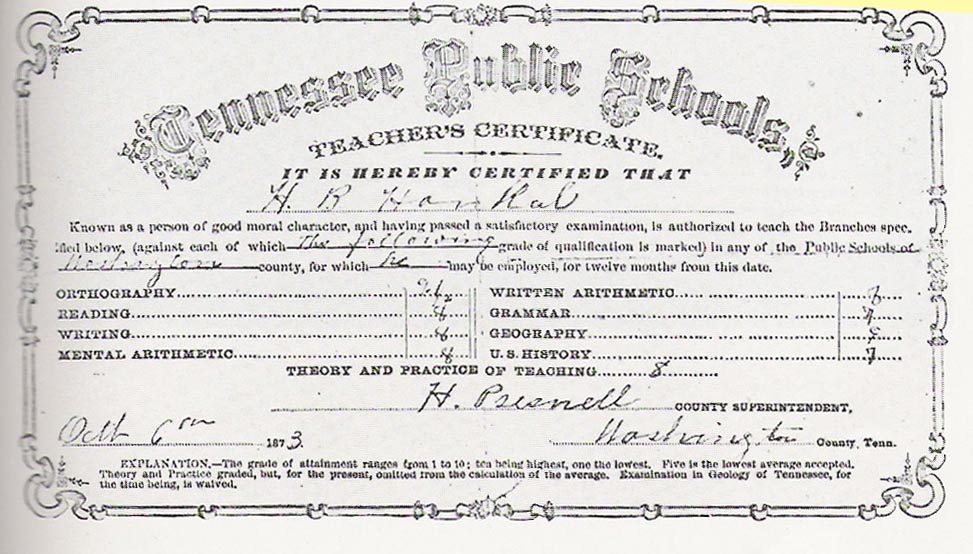 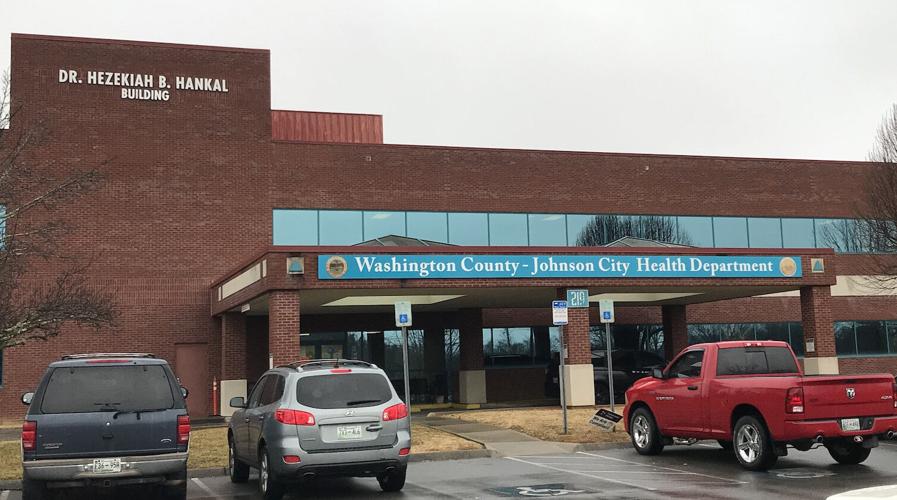 The Hankal family plot is located in the Westlawn Cemetery, Johnson City, Tennessee. Take I-26 to Johnson City. The closest exit to the cemetery will be Exit 22. Coming from the north you will need to take the Elm St. exit, and turn left on E. Unaka Ave. Go about a block and turn left on Baxter St. Go 7 blocks and turn right on Forest Ave. Go one block and turn left on Lowell St. From Lowell St. enter the cemetery and make your way to the rear. At the highest elevation look toward the rear of the cemetery for a large concrete slab - easy to find as its the only one in the cemetery. The Hankal family is buried under this slab. There is a marker for H. B. Hankal on the left side. GPS below is meant to pinpoint the exact location of H. B. Hankal's Grave. 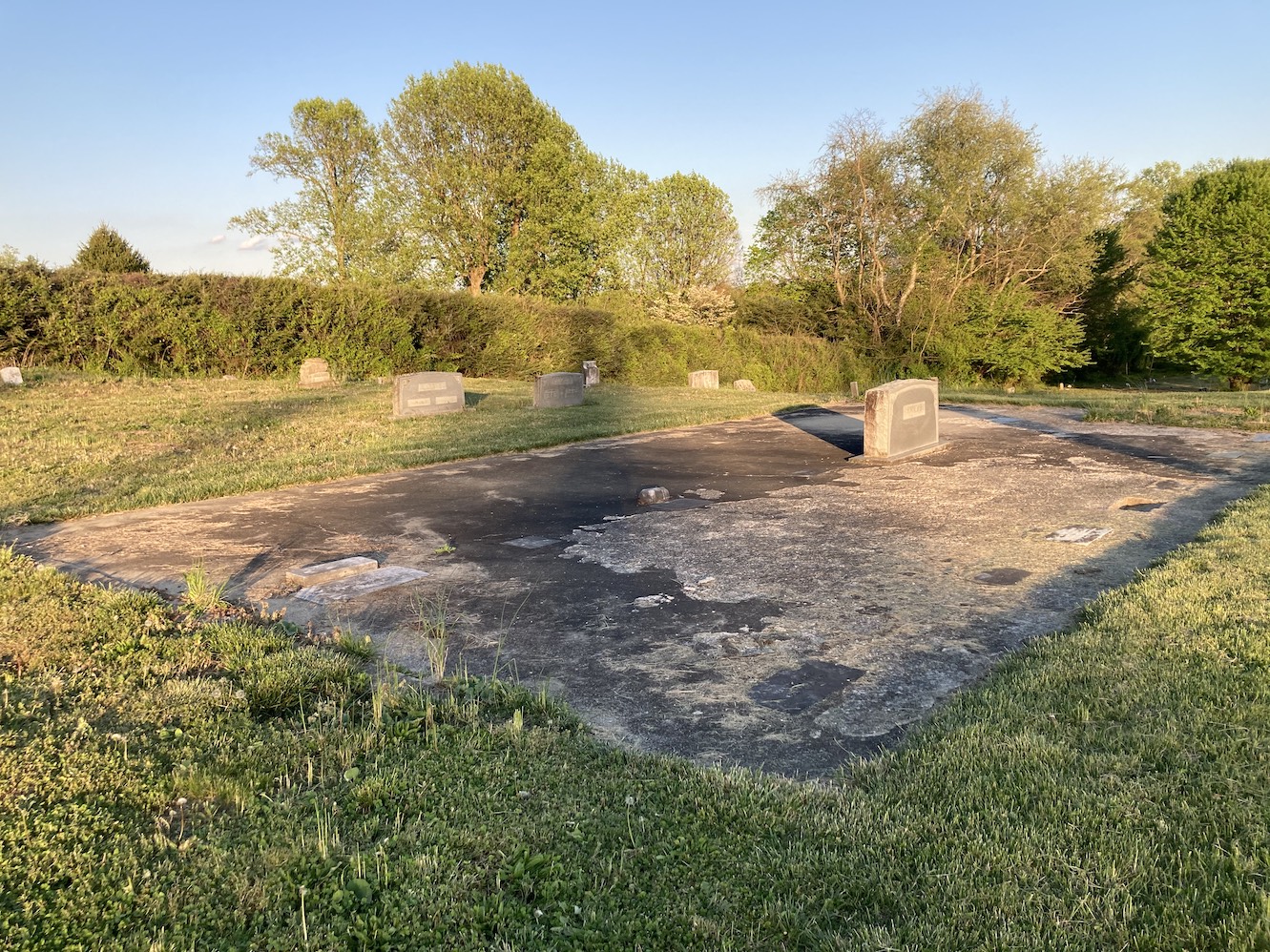 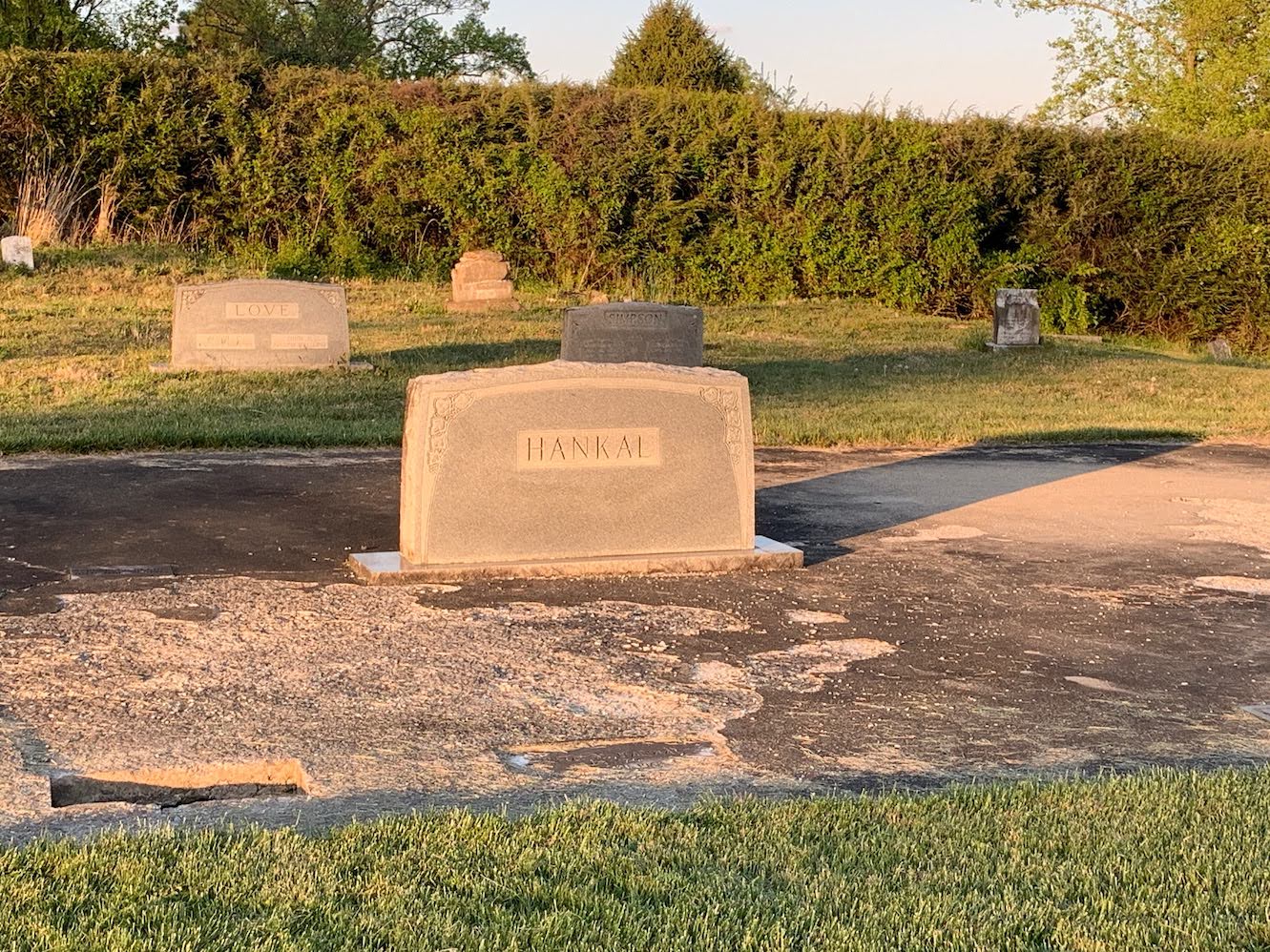 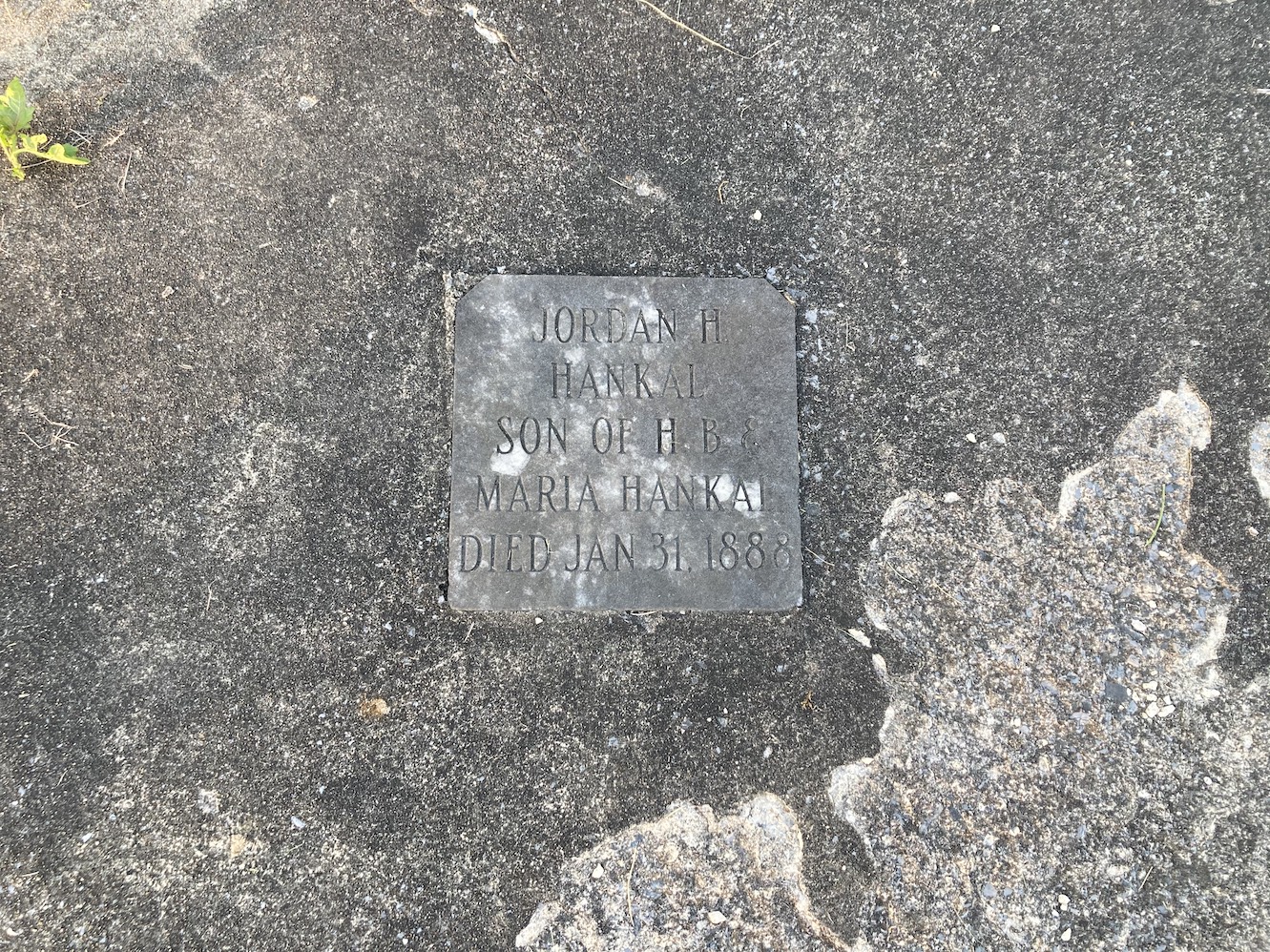 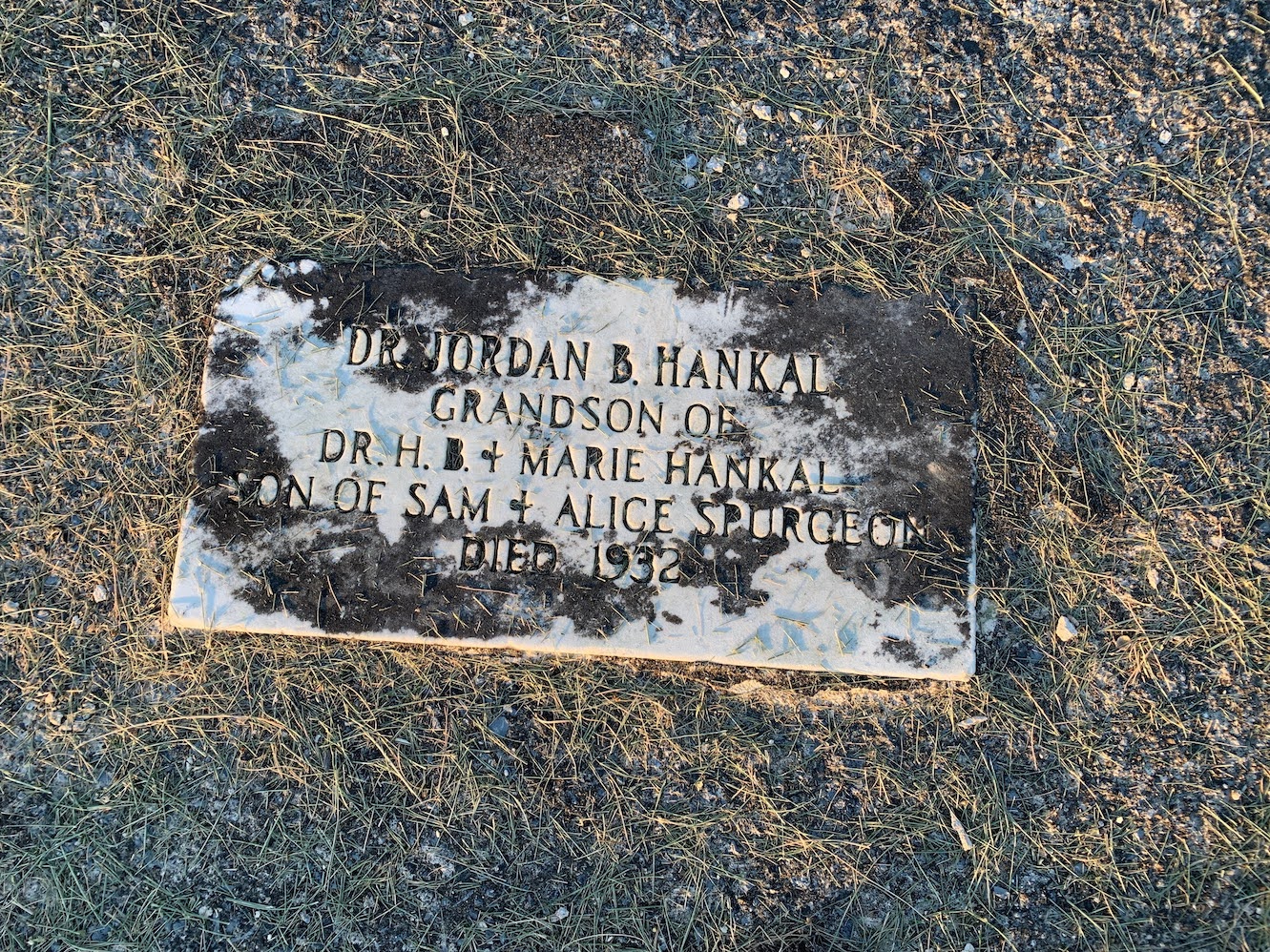 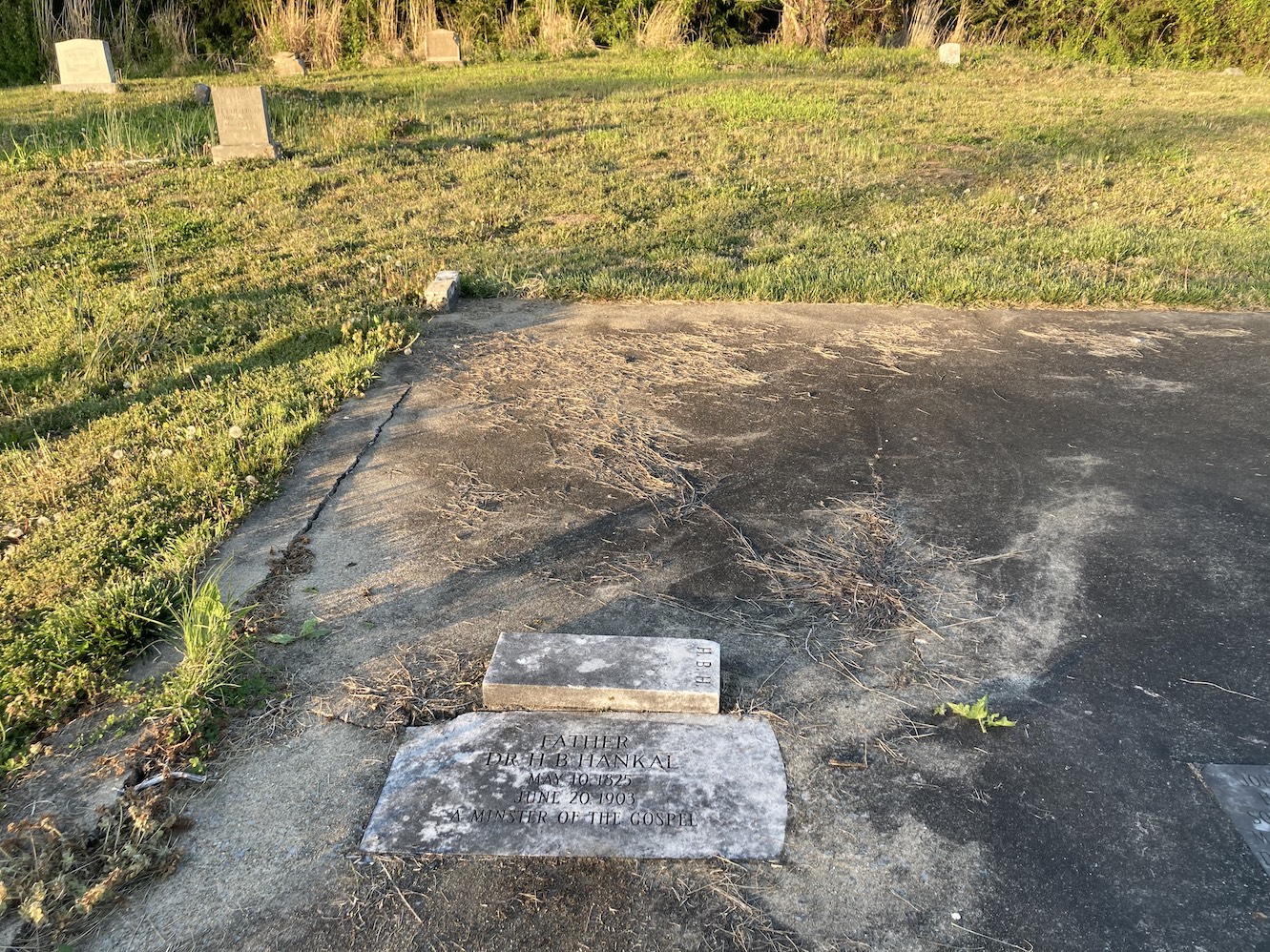 Special Recognition: C. Wayne Kilpatrick and Tom L. Childers in traveling with me in April, 2021 over to the very eastern part of Tennessee to find graves of restoration preachers. Some of the photos on this page were supplied by Tom.