Orlan Hershel Hogue was born the 10th of July, 1920 in Tennessee. He was the son of Harry Clay Hogue (1876-1962) and Susie Jane Peeler (1890-1973). He and his wife Bernice Fly (1925-2010), the daughter of Aubrey and Lela Fly. They lived in Milan, Tennessee. Hershell entered the U.S. Navy September 24, 1942. He served on the U.S.S. Lexington, which for a time was part of the fifth fleet at Pearl Harbor. It was a part of the Pacific Theater for over 21 months, the Japanese claiming they had sunk her four times. Yet, she and her crew survived. After the war, Orlan returned to his West Tennessee home where he was a preacher of the gospel of Christ. He was preaching for the Huntingdon church of Christ, when one day he was making his daily visit to the post office when exiting the building he bumped his elbow. Going back into the building he fainted, hitting his head on the floor. Finding out later a clot had formed he was taken to Mempis for surgery. Soon after he passed away on May 10, 1956, just two months shy of his thirty-sixth birthday.

Sad Death of A Gospel Preacher

Orlan H. Hogue is buried in the Oakwood Cemetery in Milan, Tennessee. In West Tennessee take I-40 to Exit 80 and head north on Hwy. 45 Bypass toward Milan. Exit to 45E toward Milan. When coming into Milan, take the S. Main St. Exit and head into town. The cemetery should be on the right. Do not enter the main entrance but head up to the traffic light and turn right on Ellington Drive. Begin looking to your right for the grave of O.H. Hogue. Note: While in the Oakwood Cemetery be sure to visit the grave of J. R. Stockard. His grave is locate near the north gate of the cemetery on the left. 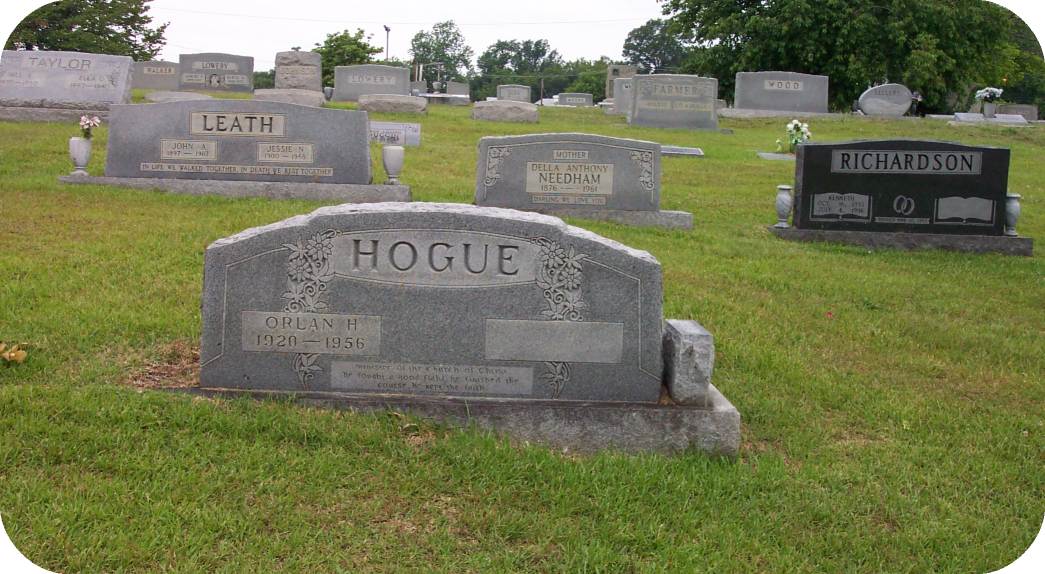 Minister of the Church of Christ
He fought a good fight, he finished the
course, he kept the faith

Special Thanks: To Tom Childers for assisting me in bringing to light and helping me to locate and visit the grave of Hershel Hogue. I visited the grave in June, 2007 while I was engaged in a series of meetings at Austin's Chapel Church of Christ in Scott's Hill, Tennessee.