A few days ago on a cold day with big snow on the ground my parents and I visited J. R. Stockard and his sister Edna. They live in Bradford, Tennessee near where I was born and reared.

J. R. Stockard started preaching the gospel in 1916. He preached his first sermon at Fairview church near Milan, Tennessee. This means he has been preaching about sixty years. He was born at Milan, Tennessee in 1889.

I heard brother Stockard preach a number of times when I was a young man. He had a good influence on me, and he has led many people into God's way.

N. B. Hardeman baptized brother Stockard in 1911 while he was attending school at National Teacher's Normal and Business School, a forerunner of Freed-Hardeman College. Brother Stockard, like many of us admired brother Hardeman. He commented on brother Hardeman's excellence in teaching and using proper grammar. He was also blessed by A. G. Freed.

Brother Stockard attended Memphis State Teacher's College and he earned a B.S. degree from Union University in Jackson, Tennessee. He taught school along with his preaching for twenty-five years.

J. R. Stockard and Bertha Couch were married in 1920. She passed away in 1970. They had a good marriage of fifty years to the day. She died on their fiftieth anniversary!

Neal Penny is one of the men whom brother Stockard baptized who became preachers of the gospel.

Getting away from the Bible in preaching is one of the dangers brother Stockard senses. He told me he is convinced more than ever that the Bible is true and is what ought to be preached!

Brother J. R. has had seven or eight debates. He and I both have debated one man, Mr. W. C. Nevil, a Baptist minister. I heard brother Stockard debate him about thirty years ago and did a good job in discussion with Mr. Nevil. I admired Mr. Nevil for his willingness to discuss with us our differences

Brother Stockard is eighty-seven years of age. He preaches some. You may write this faithful soldier of Jesus by addressing him as: J. R. Stockard, Bradford, Tennessee, 38316. Let us practice more of giving deserving ones their "flowers" while they can "smell them."

Thank you, brother J. R. Stockard for your labor of love and work of faith.

J.R. Stockard was born October 1, 1889, in Gibson County in Moores Chapel community, to Thomas Jefferson and Mary Ann Stockard. He attended public school and in 1910 my grandmother sold out and moved to Henderson, Tennessee in order for Uncle J.R. and my dad, Ben, and Aunt Edna to attend a college operated by A.G. Freed and N.B. Hardeman. Here my grandmother rented a large house and took in boarders so Uncle J.R., Ben and Edna could attend the college.

It was there that my Dad, Ben, in a gospel meeting obeyed the gospel, and the next evening Uncle J. R. rendered obedience to the gospel. This was in 1910. They studied under N. B. Hardeman and Arvy Glenn Freed.

Shortly after moving to Henderson they found that they did not have milk as they had when in Milan, so my grandmother sent Uncle J. R. back to Milan to get a Jersey cow from Milan to Henderson a distance of about 40 miles. It took him two days to lead the cow to Henderson.

The first day he led the cow from Milan to just south of Jackson. He said on the evening of the first day that a man saw him and asked, "Where are you going with that cow?" He replied, "Henderson." The man asked, "Where did you come from?" He said, "Milan." The man asked, "Aren't you tired?" Uncle J.R. said, "I am give out." The man said, "Well you come on in and put up the cow and spend the night." He did. They milked the cow, put her in the barn, and they had the milk for supper and Uncle J.R. spent the night.

They arose early the next morning, the lady fixed a big breakfast and Uncle J.R. was on his way once more with his cow. It took him all day to reach Henderson. He said he never met an automobile all the way from Milan to Henderson in two days.

Ben, J.R. and Edna finished their college at Henderson. Ben and J.R. were both schooled in music and were both excellent song directors. At this time the college in Henderson was only a two year school. Uncle J.R. went on to Union University and earned his B.S. degree. Ben and J.R. conducted a lot of gospel meetings. Ben directed singing and J.R. preached. Uncle J.R. preached the gospel for approximately 65 years. He was the main individual that put the main Street Church of Christ in Milan back on the right way. The church in Milan in the early part of the century was split by the Christian Church movement (instrumental music group). The true church being the minority at that time, lost the building and were meeting in the home of brother Lusk and brother Robinson. On an occasion the Christian movement began to die and Uncle J.R. was given the keys to the building. The church then hired Uncle J.R. to preach for them.

The church in Milan since that time has grown and continues to grow and be a very strong influence in the Milan community.

He was a great soldier of the cross and was instrumental in assisting many in the faith. He has baptized several that had gone on to be great gospel preachers.

Uncle J.R. was the son of a Civil War hero, Thomas Jefferson Stockard, who rode with the famous General Nathan Bedford Forest. He was in the army three years, 1863 to 1865, and was never paid for his service.

J.R. Stockard lived more than 100 years. He died a few years ago. I heard him preach many times when I was young both before and after I started preaching. Most of his life was spent in West Tennessee where I was born and raised. I heard him in a debate over 50 years ago. Many years later I had a four nights' debate with the man J.R. debated.

Many years ago, brother Stockard told me a very unusual story about a 90 year old man. Someone asked this 90 years old man if he had any brothers or sisters and he said he had just a brother and that that brother had died 140 years ago. It seemed that the 90 year old man was "mixed up," but he explained by saying that his father's first wife died when his father was 20 years old. She died soon after the birth of a boy, and the boy soon died also. The father married again 50 years later when he was 70. He and his second wife had a son within that year. That son became the 90 year old man mentioned above. He did have a brother (a half-brother) who had died 140 years before! My brother Jack who was born I was, died 79 years ago!

Directions To The Grave Of James R. Stockard

J. R. Stockard is buried in the Oakwood Cemetery in Milan, Tennessee. In West Tennessee take I-40 to Exit 80 and head north on Hwy. 45 Bypass toward Milan. Exit to 45E toward Milan. When coming into Milan, take the S. Main St. Exit and head into town. The cemetery should be on the right. Head into the main entrance and take the first road to your left. As you are rounding the bend stop the car and head up the hill to your right. Stockard is buried on the hill in the center of the graveyard.

Note: While in the Oakwood Cemetery be sure to visit the grave of Orlan H. Hogue. His grave is locate near the north gate of the cemetery on the left. 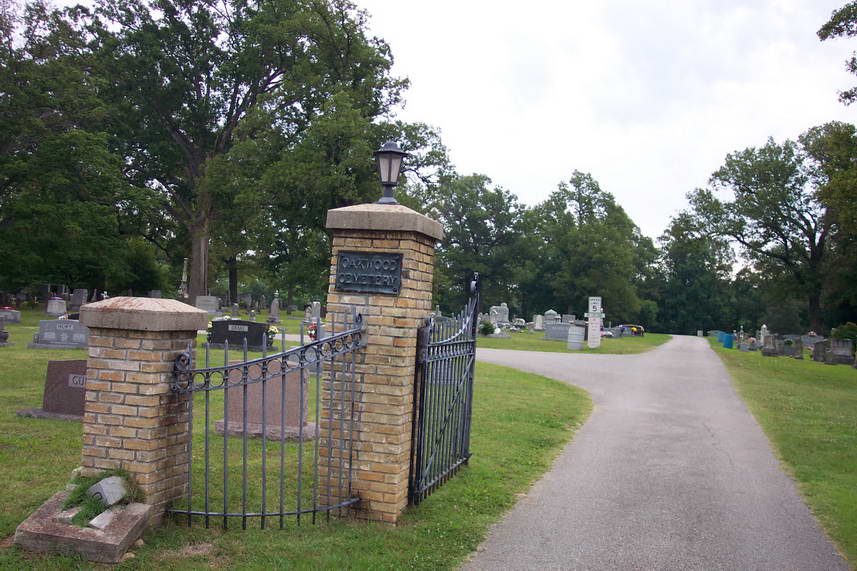 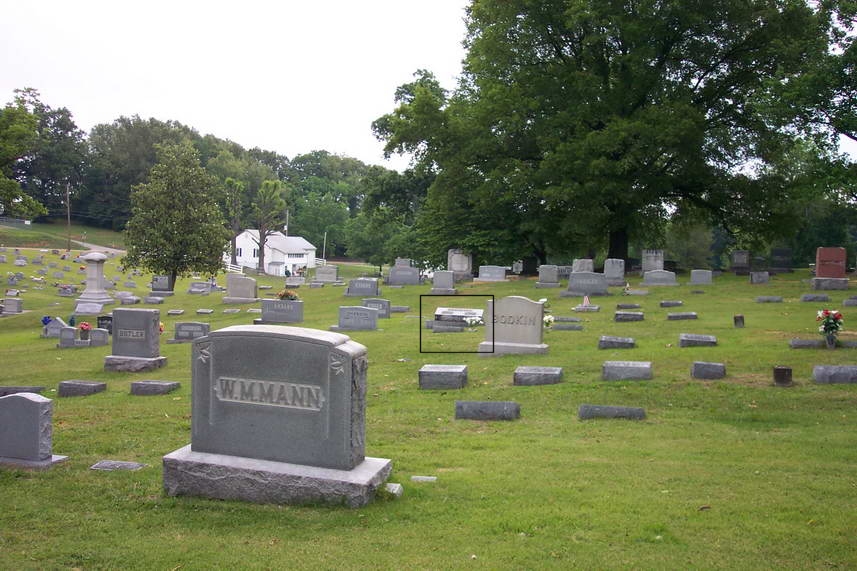 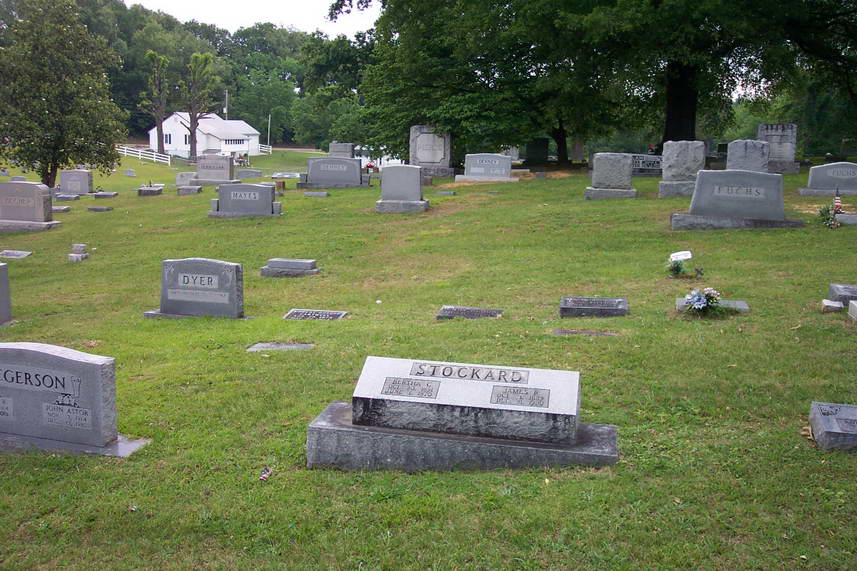 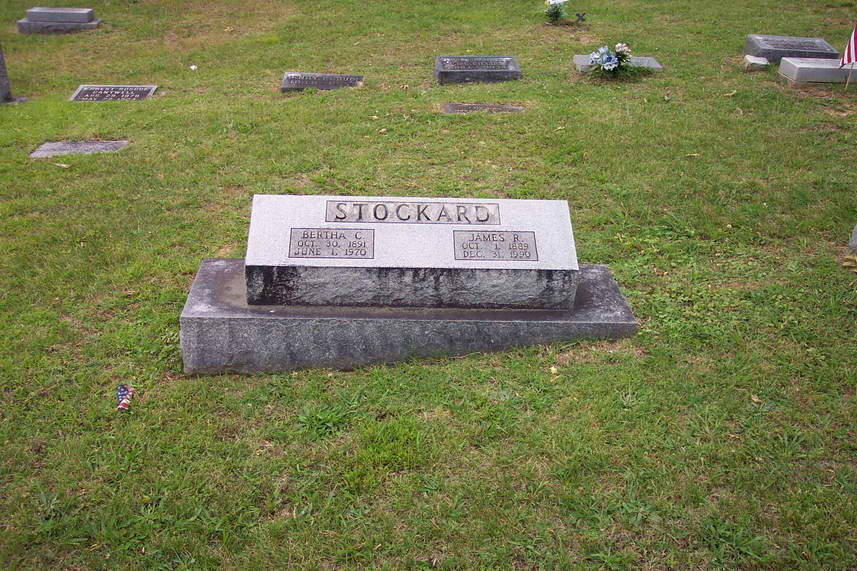 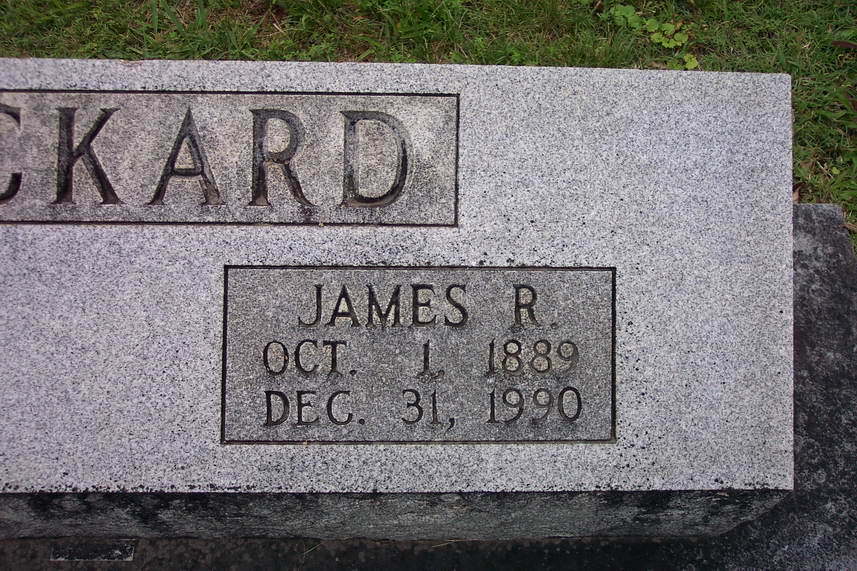 Special Thanks: To Tom Childers for assisting me in bringing to light and helping me to locate and visit the grave of J.R. Stockard. I visited the grave in June, 2007 while I was engaged in a series of meetings at Austin's Chapel Church of Christ in Scott's Hill, Tennessee.