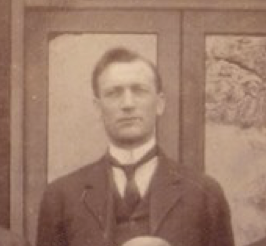 The Life of W. L. Karnes

Walter grew up in the church of Christ. His parents were faithful members of the church all his days. He attended Nashville Bible School under the tutelage of David Lipscomb and James A. Harding. When brother Harding departed the school the head Potter Bible College in Bowling Green, Kentucky, Walter joined the staff as one of the teachers.

For many years Walter preached for several different churches and preached gospel meetings in several states. While living around Portland, Tennessee he preached some at Rich Pond just south of Bowling Green, as well as churches around Portland. His final work was at the Green Street church of Christ in Nashville.

Over the years, W. L. Karnes wrote articles and sent reports of his efforts to the Gospel Advocate. He preached many funerals and sent obituaries that were printed. He was always concise, and accurate in his research and teaching. Below are reports on his demeanor and presence in the lives of those who knew him. By these is appears that he was most beloved by an appreciative brotherhood.

He developed severe bowel sickness that led to his demise on May 18, 1939 at the age of 62. His wife Annie lived many years after her husband’s passing. She followed him in death December 10, 1973. Both are buried at Mount Olivet Cemetery in Nashville, Tennessee

Walter Lipscomb Karnes was born near Nashville, Tenn., May 31, 1876. His parents were faithful Christians and taught him to love the Lord from childhood. He became a Christian in early life. He inherited a deep, pious nature and cultivated an humble disposition which adorned his life.

He attended the Nashville Bible School during its early years and drank deep of the Biblical knowledge at the feet of the justly renowned and famous founders of that institution—David Lipscomb and James A. Harding. He soon began to preach the gospel and in 1902 was established as a gospel preacher. He was a student teacher for some months in the Nashville Bible School. In 1901, when James A. Harding established Potter Bible College at Bowling Green, Ky., Brother Karnes accompanied him and taught in that college so long as Brother Harding was connected with it. In addition to his teaching, he continued to preach the gospel as he had opportunity. He was an earnest and faithful, patient and sympathetic teacher; his students loved him for his pure, humble life.

After leaving Potter Bible College, Brother Karnes devoted his time to preaching the gospel. In 1904, he was married to Miss Annie Hatfield, of Mount Juliet, Tenn. Sister Karnes was a devoted wife and Christian mother to his children. Brother Karnes did "station work" with different churches, but he loved evangelistic work. As a result of his labors hundreds were brought to Christ and a number of congregations established. Brother Karnes was satisfied to work in the vineyard of the Lord wherever there was an opportunity for work. He did not seek places where he could receive a large remuneration, but was willing to sacrifice and serve wherever he could do good. His labors were given largely to Kentucky and Tennessee; however, he did evangelistic work in other states. He held one meeting in Arkansas near Paragould and baptized more than a hundred people. He was responsible for the work being started in Ruston, La. It was his joy to go into new fields and do "mission work." He was ever ready and willing to make the sacrifice that it cost to do such work.

By nature, Brother Karnes was an humble man. He was a faithful gospel preacher; he loved the truth of God and the salvation of souls. He was tenderhearted and sympathetic in preaching the gospel and often wept freely in proclaiming the old, old story of the cross. He made no boasts about his ability or attainments; yet he was an able gospel preacher and was adorned with many of the characteristics of the Christ. He preached the gospel in simple language and "the common people heard him gladly." He was not ashamed of the gospel and used freely scriptural quotations in his preaching. He had memorized much of the scripture while in school under Brother Harding, and he could quote many chapters. Brother Karnes loved the Lord and loved peace; he was never known to cause any trouble in any congregation, or be a party to any strife. This is a high commendation of a gospel preacher of this age. He was a peacemaker and sought to reconcile his brethren to the Lord and to each other.

Brother Karnes was laboring with the Green Street Church, Nashville, Tenn., when the end came. He had been working with this church for about two years; the church held him in high esteem and has made much progress under his instruction. He delighted in teaching the Bible and for more than a year he had been teaching four and five Bible classes each week; since the first of this year he has been teaching six Bible classes each week. One of these Bible classes was taught to the colored people in Nashville. He was not ashamed to go among the poor and the lowly of earth in the name of the Lord and teach the truth of God to them. He often went to places where others did not care to labor. He knew how to teach the Bible, so that even the illiterate could understand it. Always clothed with humility and adorned with love and righteousness, Brother Karnes served in the name of his Lord. Such preachers of the gospel are needed today, and many more should be encouraged by the sacrificial example of Brother Karnes.

Brother Karnes passed away, May 18, 1939, at his home, 941 Russell Street, Nashville, Tenn. He is survived by his faithful wife and three children. He was a devoted father and a faithful husband, a good neighbor, and a consecrated servant of God. The churches of Christ in Nashville mourn his passing and express sympathy to his good wife and children.

On May 18 the saintly soul of W. L. Karnes took its flight from earth to God. This writer knew him intimately and well for almost twenty-five years. As a man his character was above reproach. He was strictly honest in all his dealings. His love for God and trust in him were simply unbounded. Next to his love for God and his church came his love for humanity. He often said, "I love people," and his life and work proved the truth of the statement. Many will remember fondly and gratefully his sympathy for the sorrowing, suffering, and the poor. He was most considerate of the lowly, regardless of color or race. Truly was he like his Master in this respect. While Brother Karnes loved life on earth and the good things of earth, he, at the same time, looked longingly to heaven's glory.

The writer spent much time in his home and knew his home life. As a husband and father, he was always loving, kind, and considerate. The welfare of his family was always upon his heart. He and Sister Karnes reared their children in the nurture and admonition of the Lord.

As a friend, he was constant, loyal, and true. Many have reason to feel a deep personal loss in the passing of a friend.

Brother Karnes was a preacher of the gospel for more than forty years. He was faithful to the trust as a preacher. His sermons were strong, impressive, and instructive. He delivered them in love of both God and man. With sectarianism and all the errors of men he was always uncompromising. Never did God's truth suffer in his hands. He loved it too much to ever compromise it in his preaching or life.

Brother Karnes was always interested in young preachers, and he did all he could to help them. This scribe owes him an eternal debt of gratitude for help, advice, encouragement, and sympathy.

Hi body sweetly rests in the tomb, his spirit is in the paradise of God, and his loved ones are left here to sorely miss him.

Farewell, faithful friend, loving brother, and true Christian. Long will you live in the grateful memory of those who loved you.

Pronoucement by the Board Of Trustees, Potter Orphan Home At The Death Of W. L. Karnes

We, the Trustees of the Potter Orphan Home and School, have lost through the passing of Brother W. L. Karnes a beloved Christian fellow-trustee, who was one of those selected by Bro. C. C. Potter upon the founding of the Home and School.

Resolved: That the children of the Orphan Home have lost a friend whose heart was full of love and sympathy for them.

Resolved: That Bro. Karnes recognized the ardent labors of the various Superintendents of the Home and ever gave words of encouragement to them and commended them for their work. The Superindendents having served under him shall ever hold in memory his kindly manner and tender words,

Resolved: That the Potter Orphan Home and School has lost the fervent prayers of a devoted Christian.

Resolved: That in the going of Bro. Karnes we see the closing of a well spent life and remember the scripture: "Precious in the sight of the Lord is the death of his saints."

Adopted this July 4,1939 at the regular meeting of the Trustees of the Potter Orphan Home and School.

"We shall ever miss him in our meetings.

"We pray the Lord to watch over you and keep and bless each of you until you can unite with him in a place of eternal bliss.

"'Blessed are the dead that die in the Lord/

"In Christian love by the Trustees of the Potter Orphan Home and School, July 4,1939. 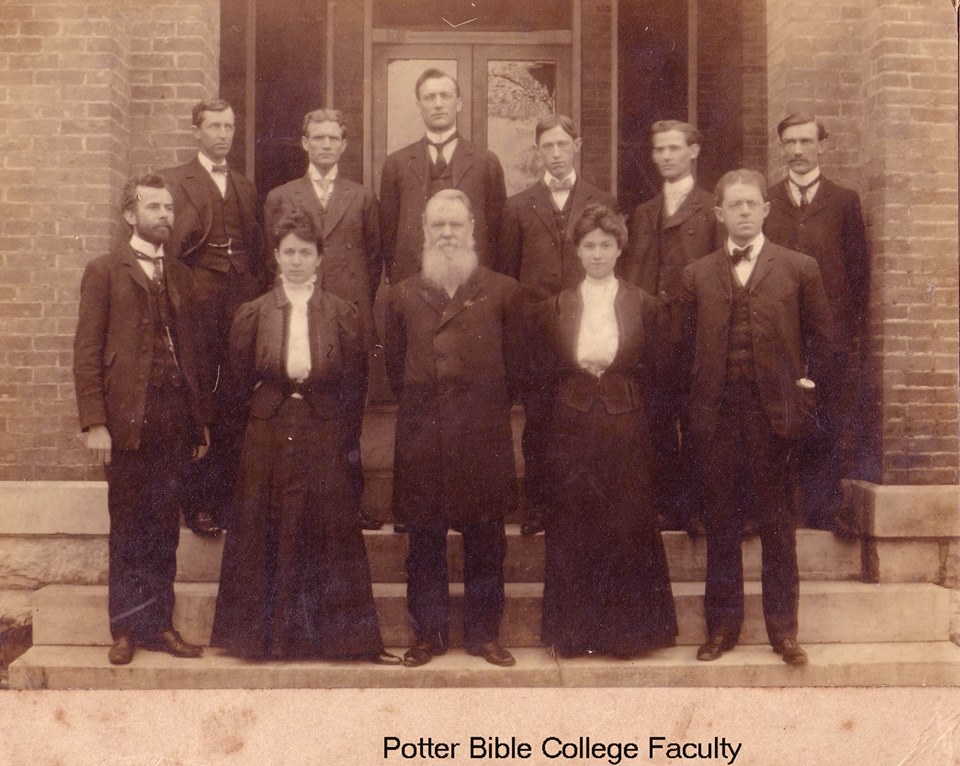 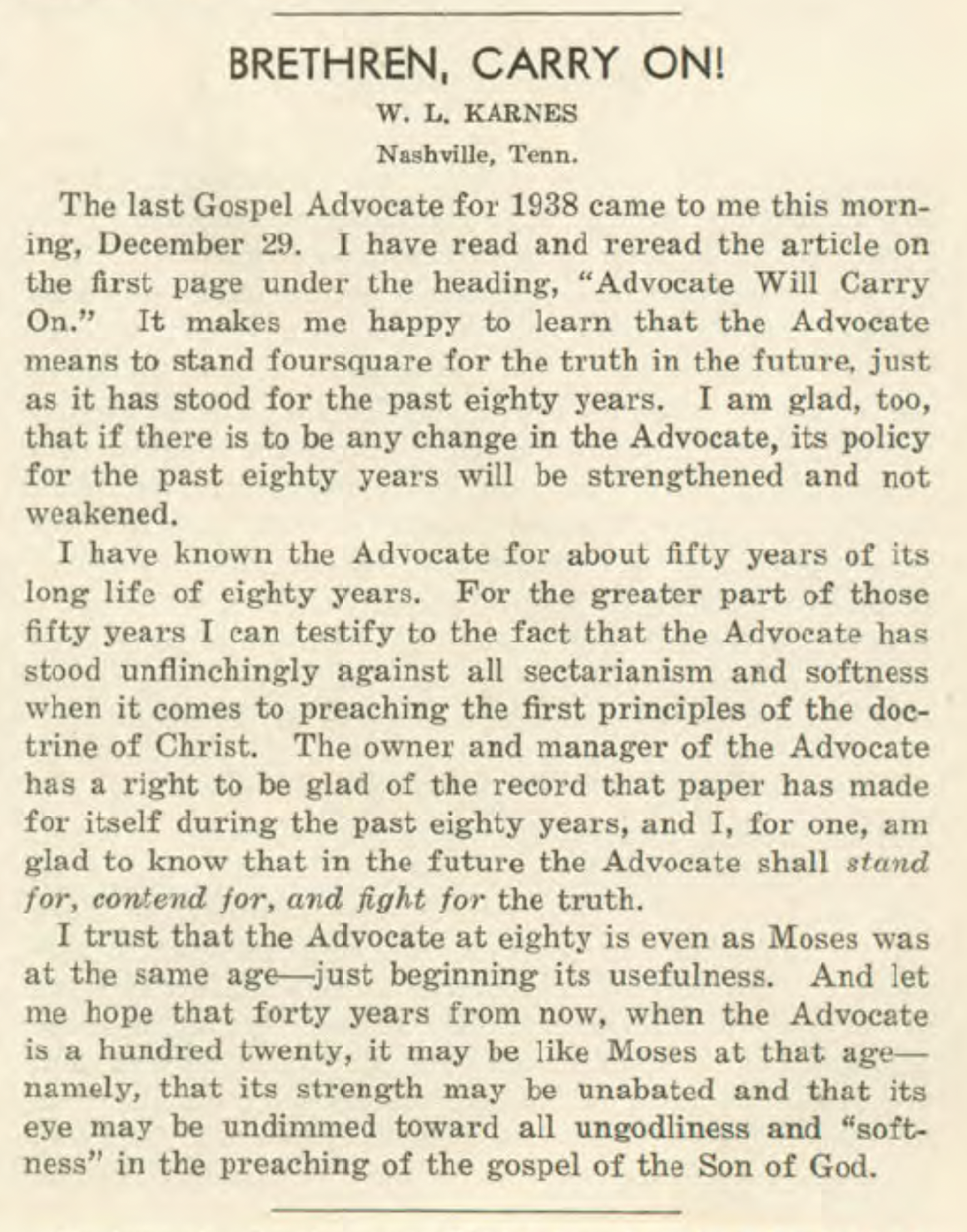 The Karnes family plot is in the Old Mount Olivet Cemetery in Nashville, Tennessee. Among many of the dead, now with the Lord there, they are located in Section 12, just north of the middle of the section. You can go to the Section sign, and looking in the graves will be several rows in and to the left. Mount Olivet can be easily accessed from I-24 in Nashville. Take the Fessler's Street exit and head north two lights to Lebanon Pike and turn right. You'll pass the Catholic Cemetery. Then next cemetery will be Mt. Olivet. You can go to the office for a map, or see one here. Or, follow the GPS actual location below. The plot is in Section 12. 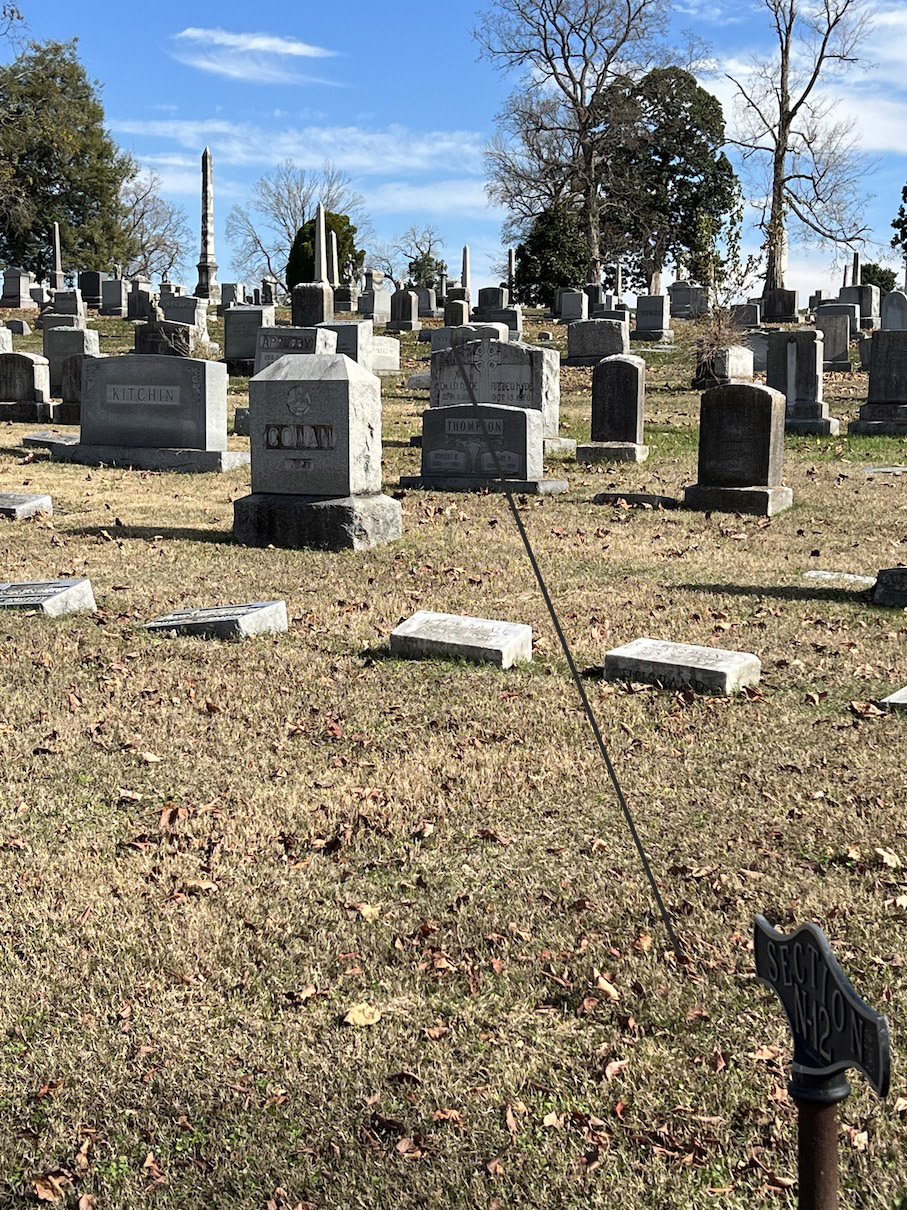 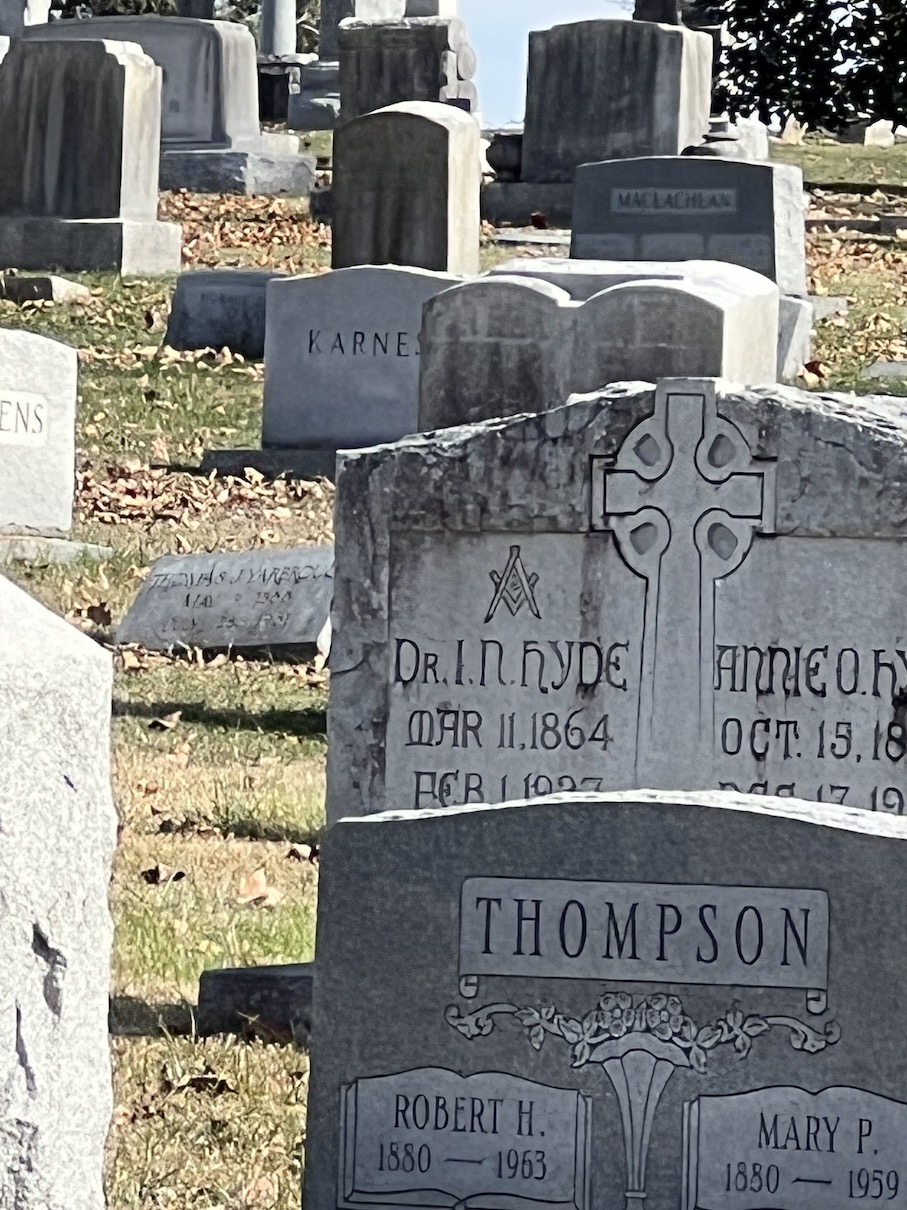 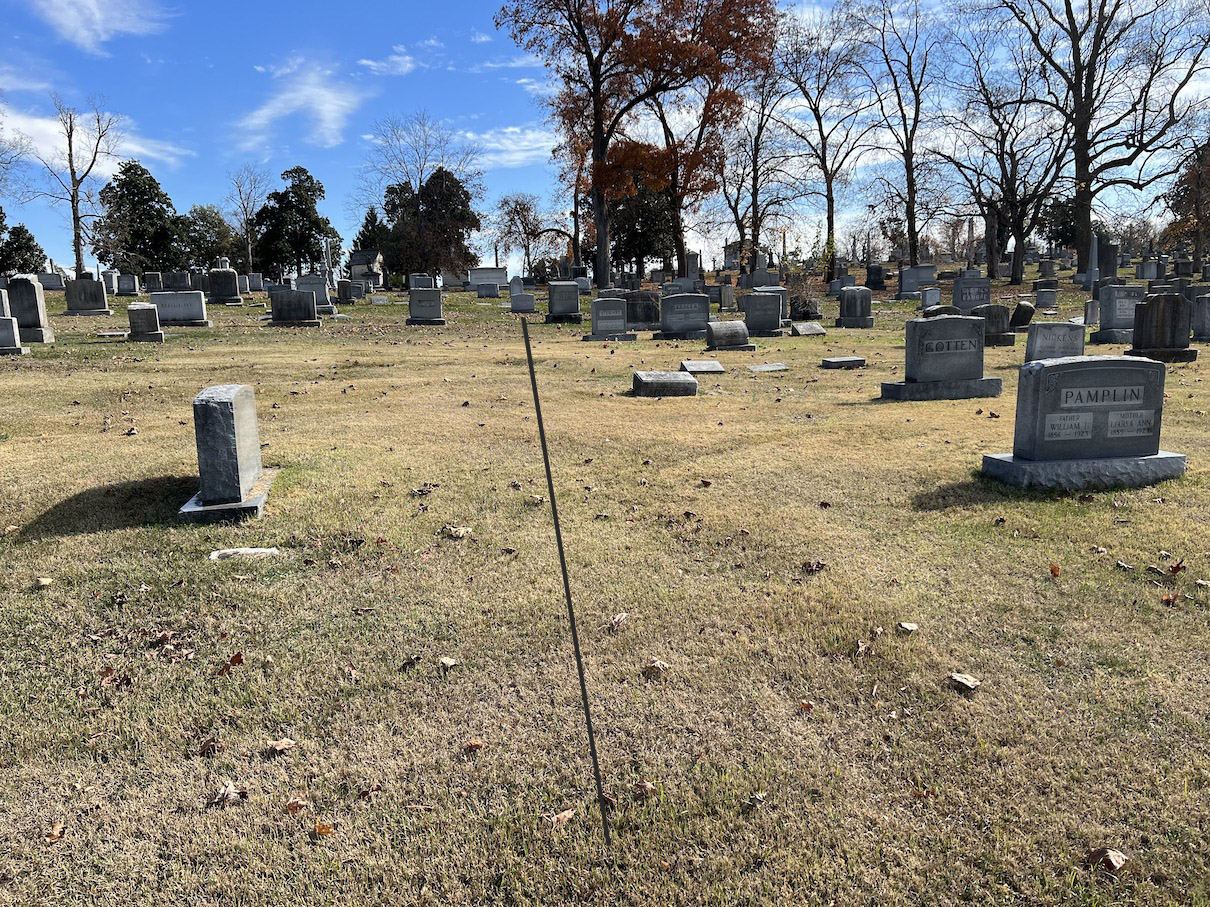 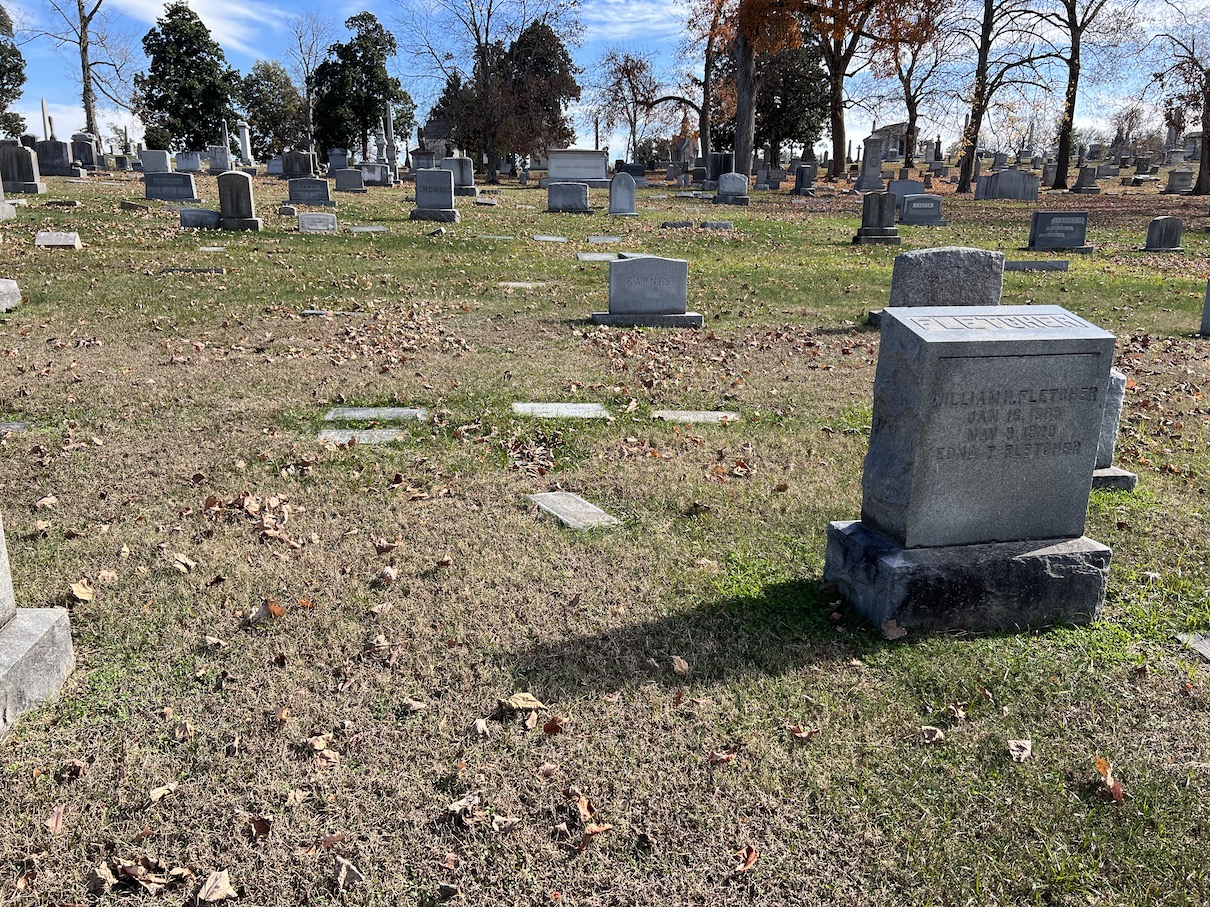 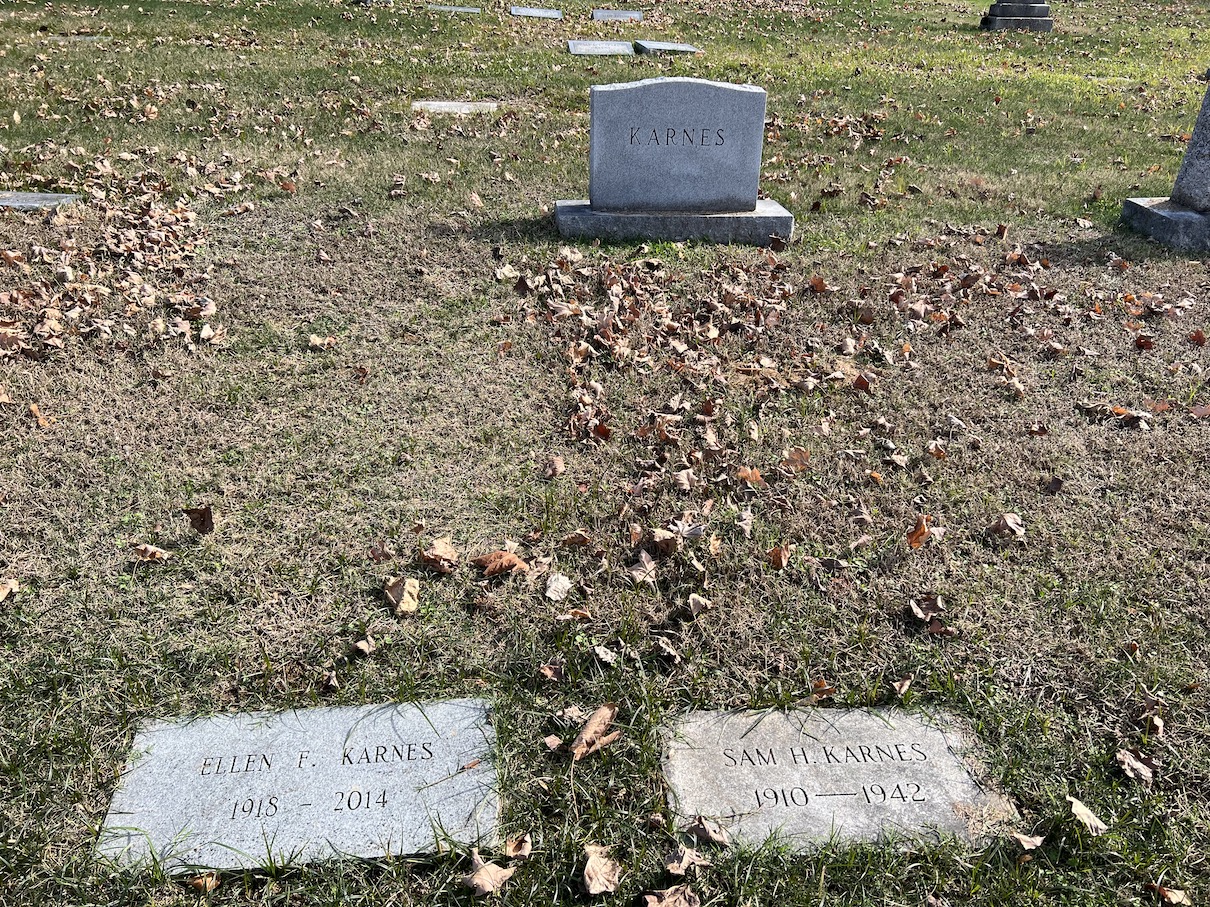 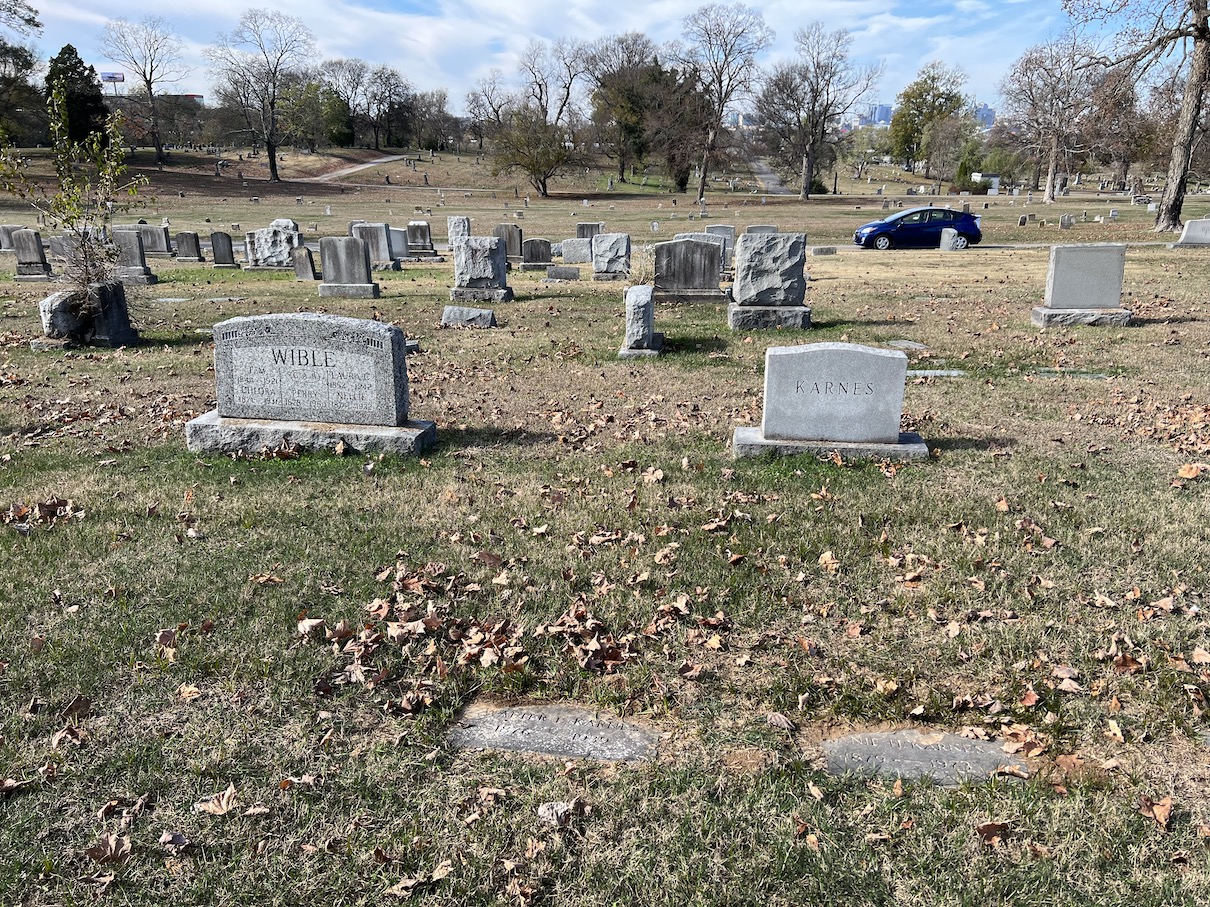 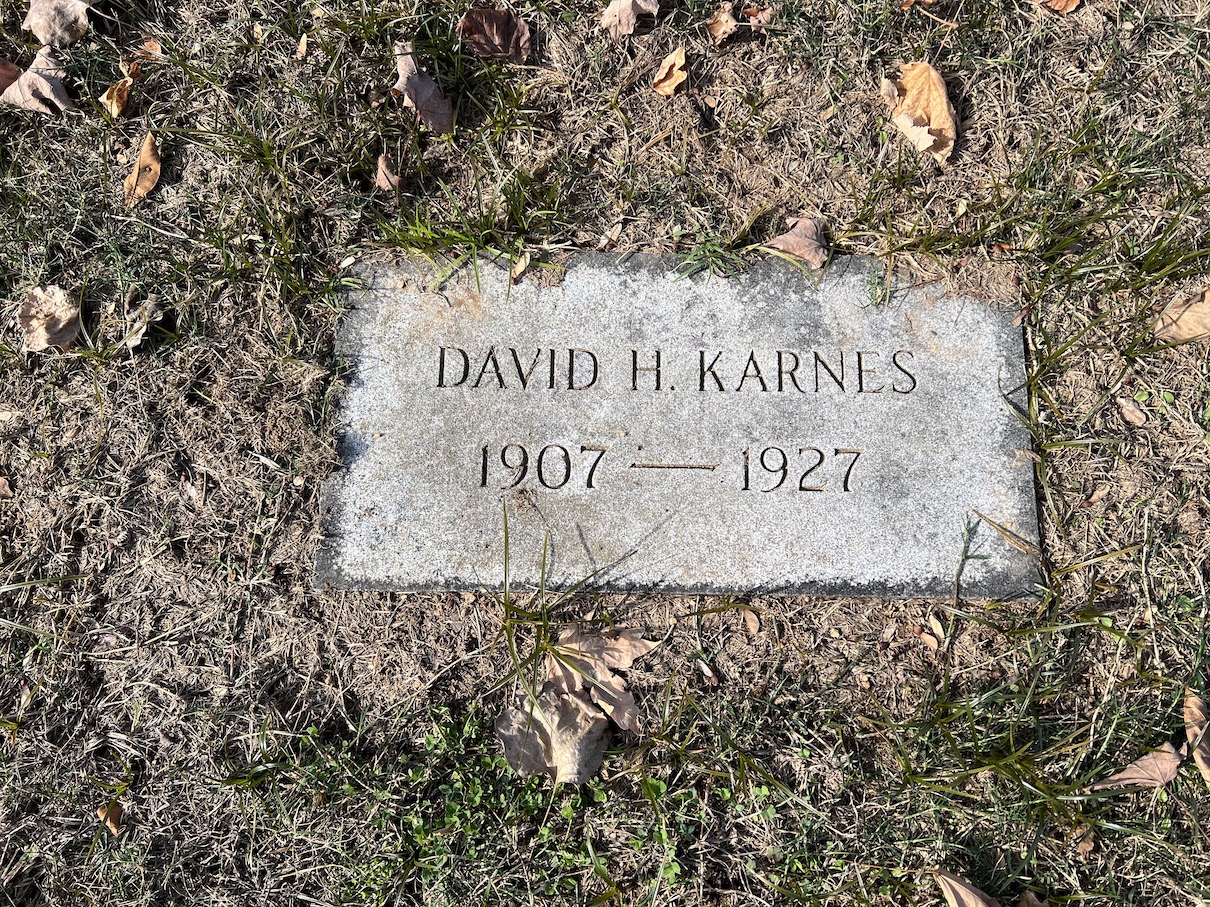 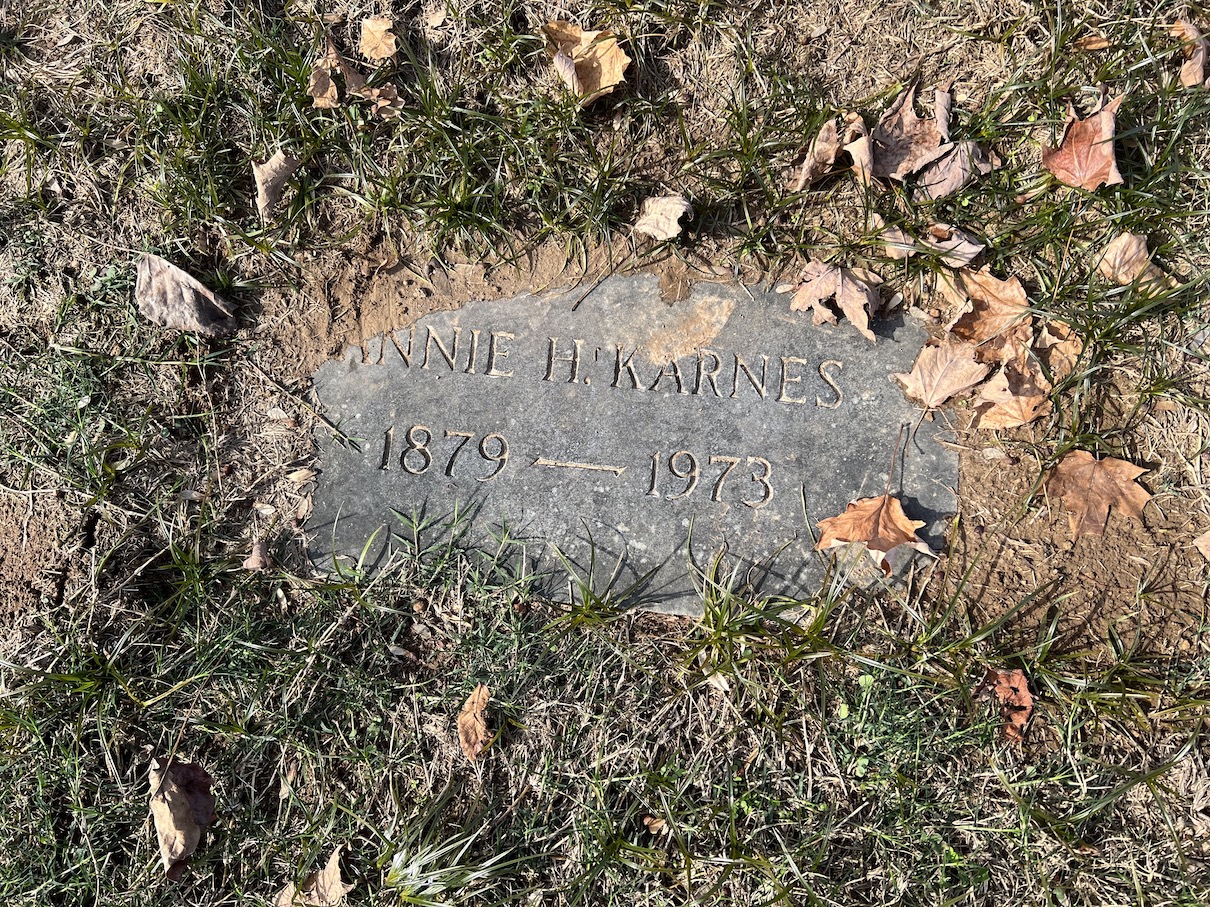 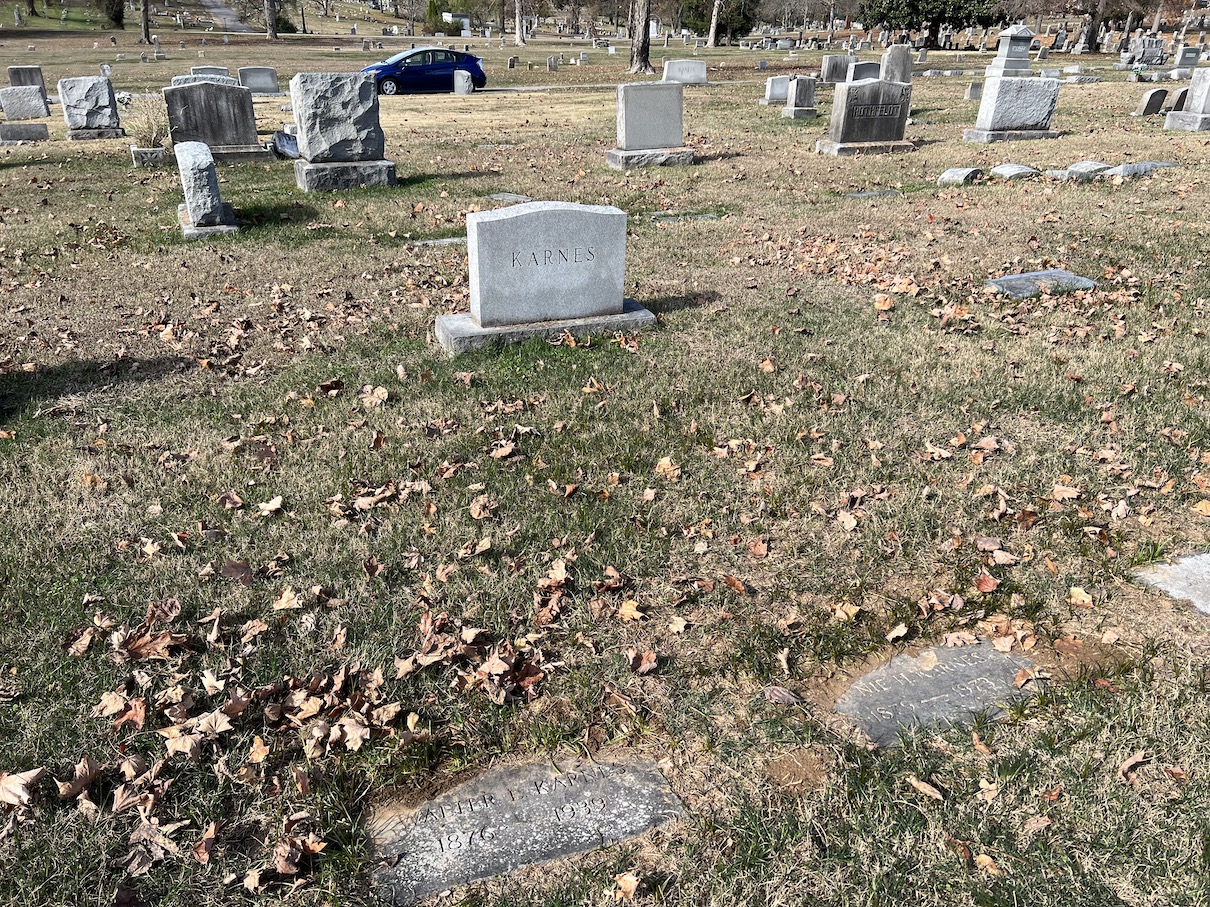 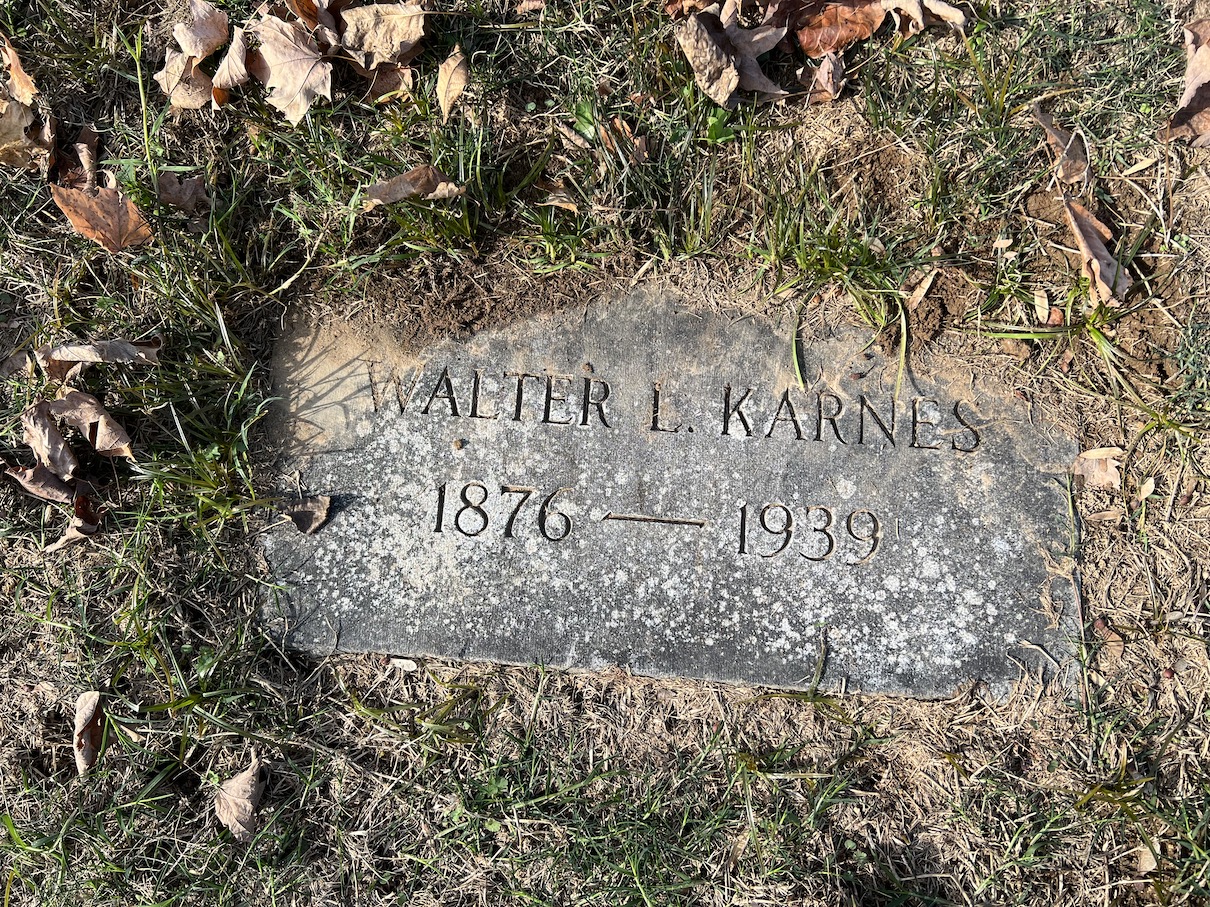