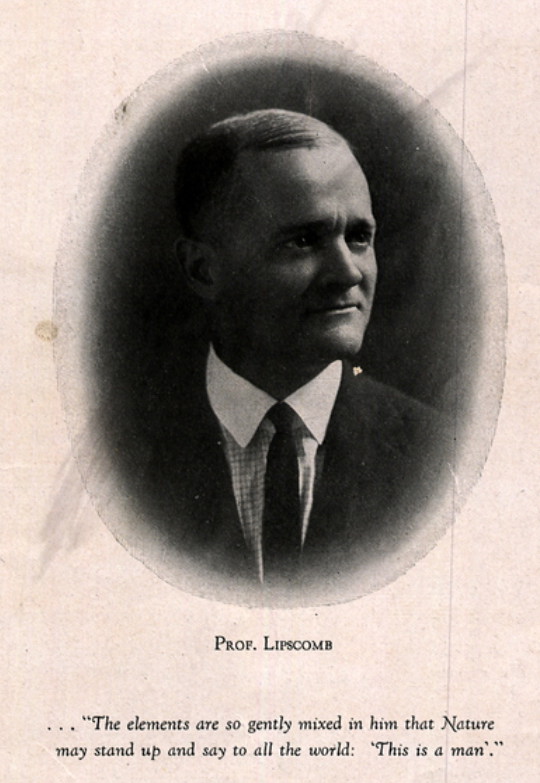 The Life of H. S. Lipscomb

The Lipscomb name has been synonymous with churches of Christ in Central Tennessee since the mid-19th century. Granville was a gospel preacher, as were his half-brothers William Lipscomb (1829-1908) and David Lipscomb (1831-1917). All three men were highly respected for their leadership in education, journalism, and the Restoration Movement. Alexander Bixby Lipscomb (1876-1940), Horace’s older brother, too, was known for his lead in the Christian movement as well.

Horace grew up in the post-war South with many of its nuances and challenges. Undoubtedly, he experienced many of the difficult socio-economic changes that were incurred in the region during those transforming years. He attended Wallace University School for boys in Nashville. Upon completing his studies there, he attended Vanderbilt University and achieved a B.A. degree in 1901 and an M.A. in 1903. He was active in student life, playing football and running track. Further education was engaged in at Cornell University and Harvard University.

After school, he began teaching in the public school system. He taught at Tarbox School in West End, the old Elliot School in the Germantown Historic District, and the old Hume-Fogg High School on Broadway in Nashville. He was the principal of two junior high schools, Highland Heights and East Nashville.

Around 1919, Horace left the school system for a short time, becoming a sales manager for the Denby Trucking Company. His time away from education was short-lived.

Nashville Bible School was founded in 1891 under the leadership of James A. Harding (1848-1922) and Horace’s uncle David. His uncle William had been among its first professors.

At the end of the 1919-1920 school year, Horace's older brother, A. B. Lipscomb, who at that time was editor and part owner of the Gospel Advocate, was named President of David Lipscomb College. He was replacing H. Leo Boles, who had been the President for the previous seven years. The Gospel Advocate announced that at the same time, the college's trustees created the position of Dean to “increase the efficiency of the teaching force” and “elected H. S. Lipscomb to this office.” Then the article followed up with his overwhelming qualifications, among which were “having taught in the public schools of Nashville for eighteen years.” (G. A. “Changes At David Lipscomb College, May 20, 1920, page 497).

While David Lipscomb never wore the President’s hat, all assumed he was at the helm until his death on November 11, 1917. With the assent of A. B. Lipscomb to the Presidency, it marked the first time Lipscombs were officially in charge of the college. Brothers now controlled what took place; A. B. handled the business side, and Horace the educational side. This arrangement worked well for about a year, but soon A. B. realized other obligations made it nearly impossible to do justice to the office of President of the school. At the end of the school year, A. B. stepped down, and the Board of Trustees saw no need to look further than the appointment of H. S. Lipscomb to the Presidency. One of Nashville’s newspapers reported, “After serving successfully in the city schools of Nashville for some fifteen years, Horace S. Lipscomb has been elected President of the faculty of the David Lipscomb College, succeeding A. B. Lipscomb, resigned.” (“Lipscomb Is Named Faculty President,” The Tennessean, July 16, 1921, p.6)

At the end of the 1923 school year, Horace resigned the Presidency. The newspaper reported, “Elder H. Leo Boles has been elected President of David Lipscomb College and has assumed his new duties, succeeding Horace S. Lipscomb, who resigned to accept a position as a special agent with the Nashville agency of the American Life Insurance Company.” (“H. Leo Boles Heads David Lipscomb,” Nashville Banner, June 19, 1923, p. 3). This was Boles' second term in office.

Over the next several years, Horace assisted in good works. He served on the Board of Trustees for the Fanning Orphan Home in Nashville for many years. Occasionally, he filled the call to preach for different congregations. He served as an elder in two different congregations in Nashville, the Belmont church, and later, he served as an elder for the College church of Christ near the college campus.

On December 9, 1948, Horace was taken to St. Thomas Hospital in Nashville, where it was determined that he had suffered a cerebral hemorrhage. He died two days later at 4:20 am. His funeral was conducted on December 13, and burial followed at Mount Olivet Cemetery in the Lipscomb Family Plot near the graves of his uncles, William and David, and others of the Lipscomb family. 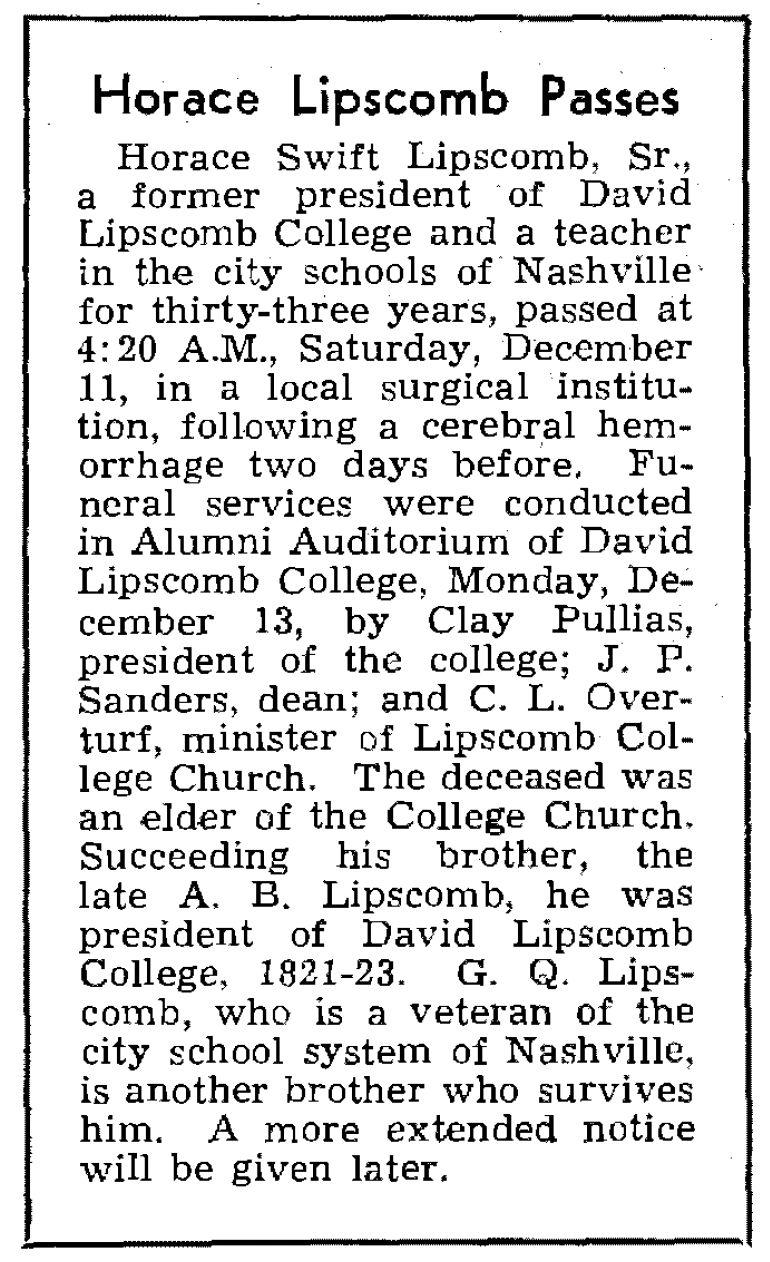 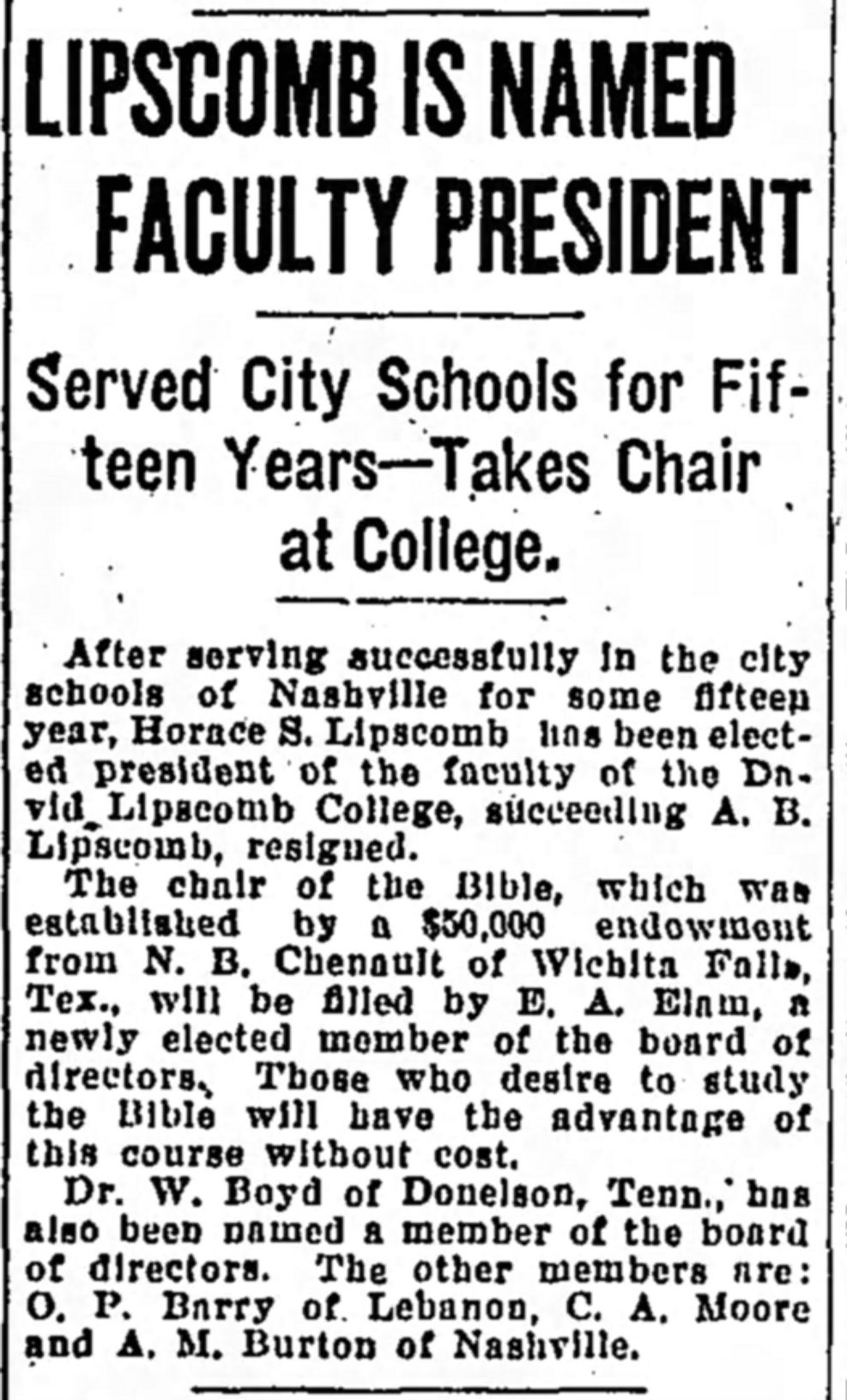 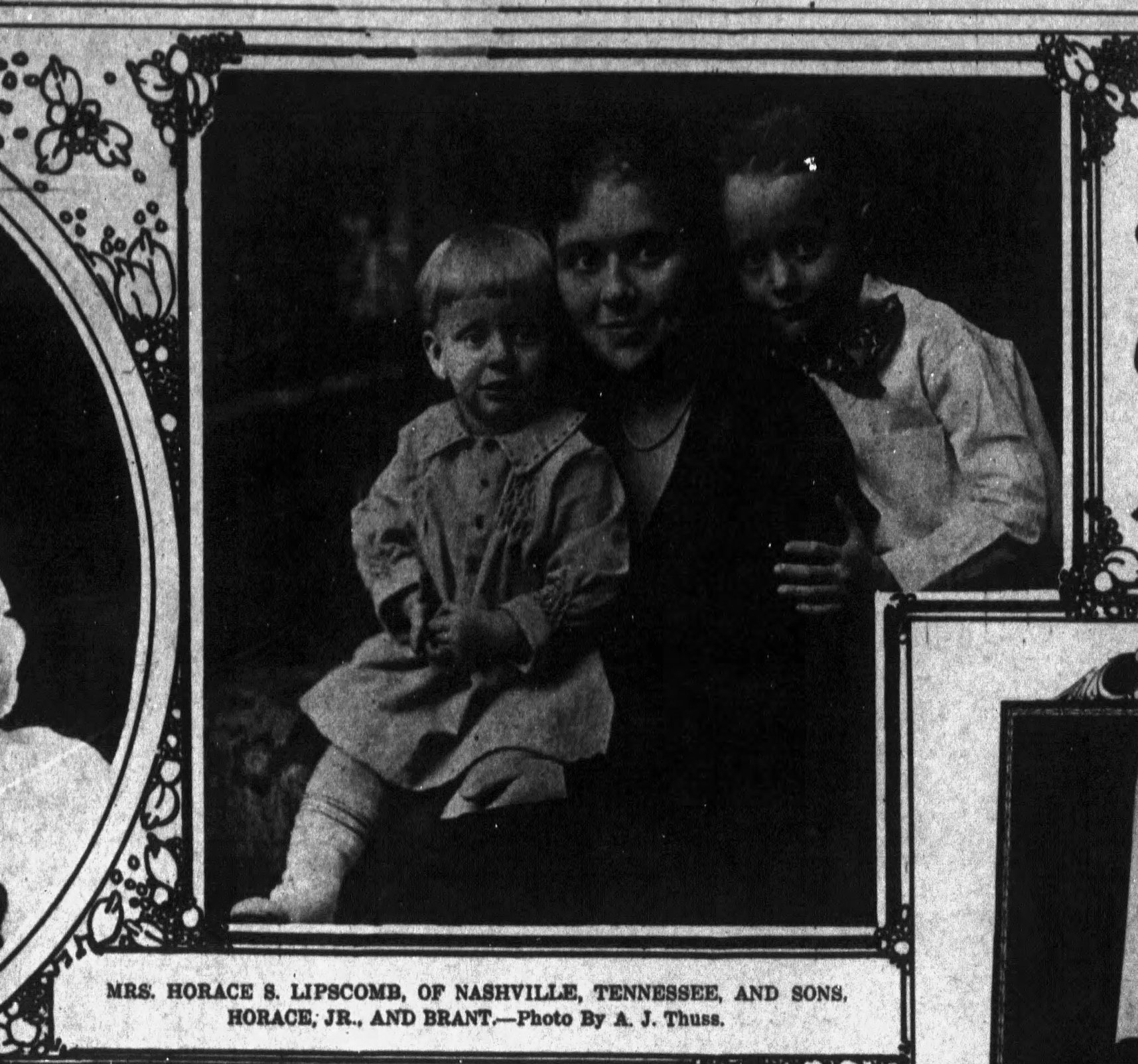 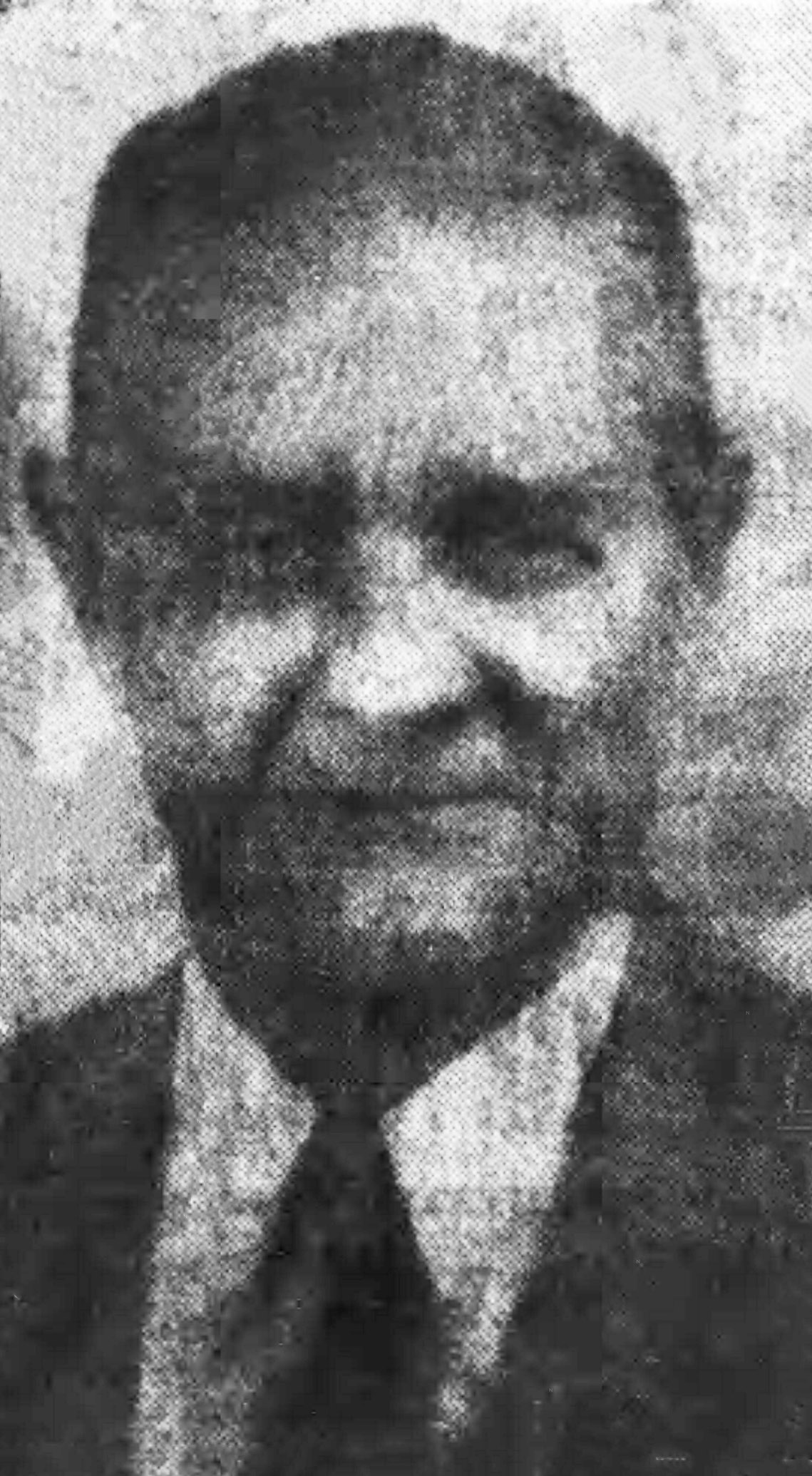 The Lipscomb family plot is located in one of Nashville, Tennessee's oldest and most prestigious cemeteries, Mount Olivet. Many famous and wealthy Tennesseans such as, Thomas G. Ryman and others are buried there. To those in churches of Christ, what makes this cemetery so famous are the numerous men and women of the Restoration Movement who are interred there. The Lipscombs are buried in Section 14. The cemetery is located on Lebanon Pike in Nashville. From the city take I-40/24 to Exit 212/Fessler's Lane and turn left. Go down to the bottom of the hill and turn right on Lebanon Pike. The cemetery will not be far up on the right. If you are heading into town, take Exit 212 and turn right on Green, and it will run in to Lebanon Pike. Turn right on Lebanon Pike, and the cemetery will be up on the right. Nearly 40 Restoration Movement preachers are buried in this cemetery. Have a look at the map of where they are buried below. 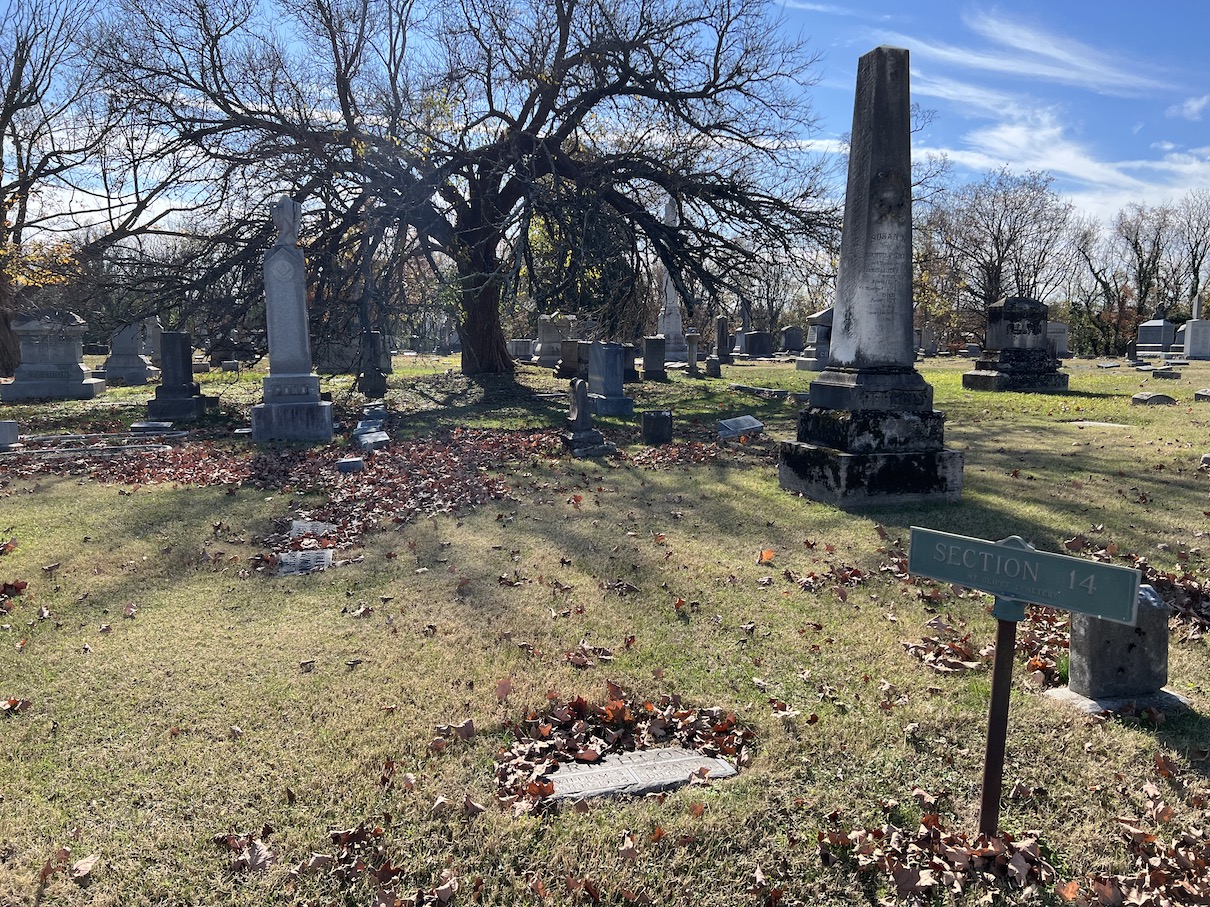 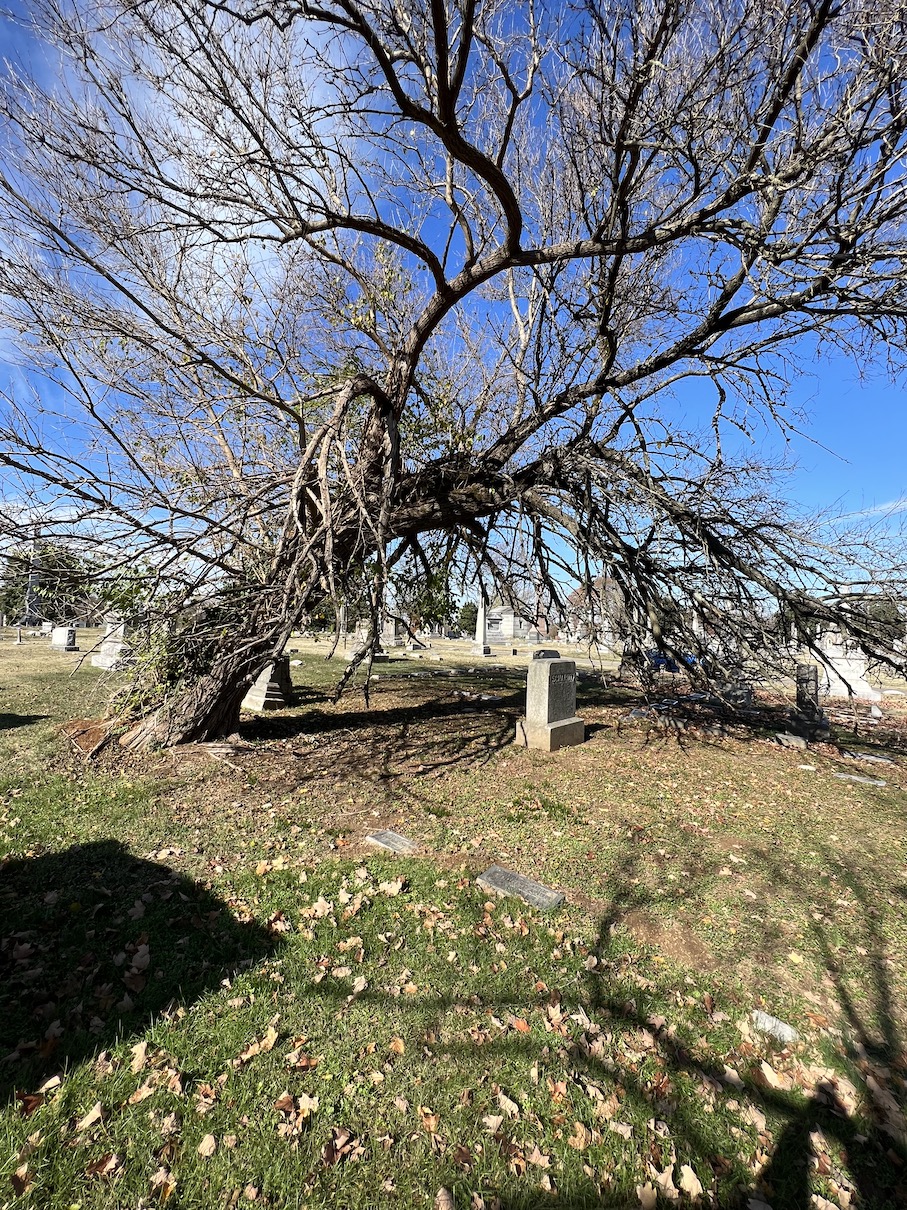 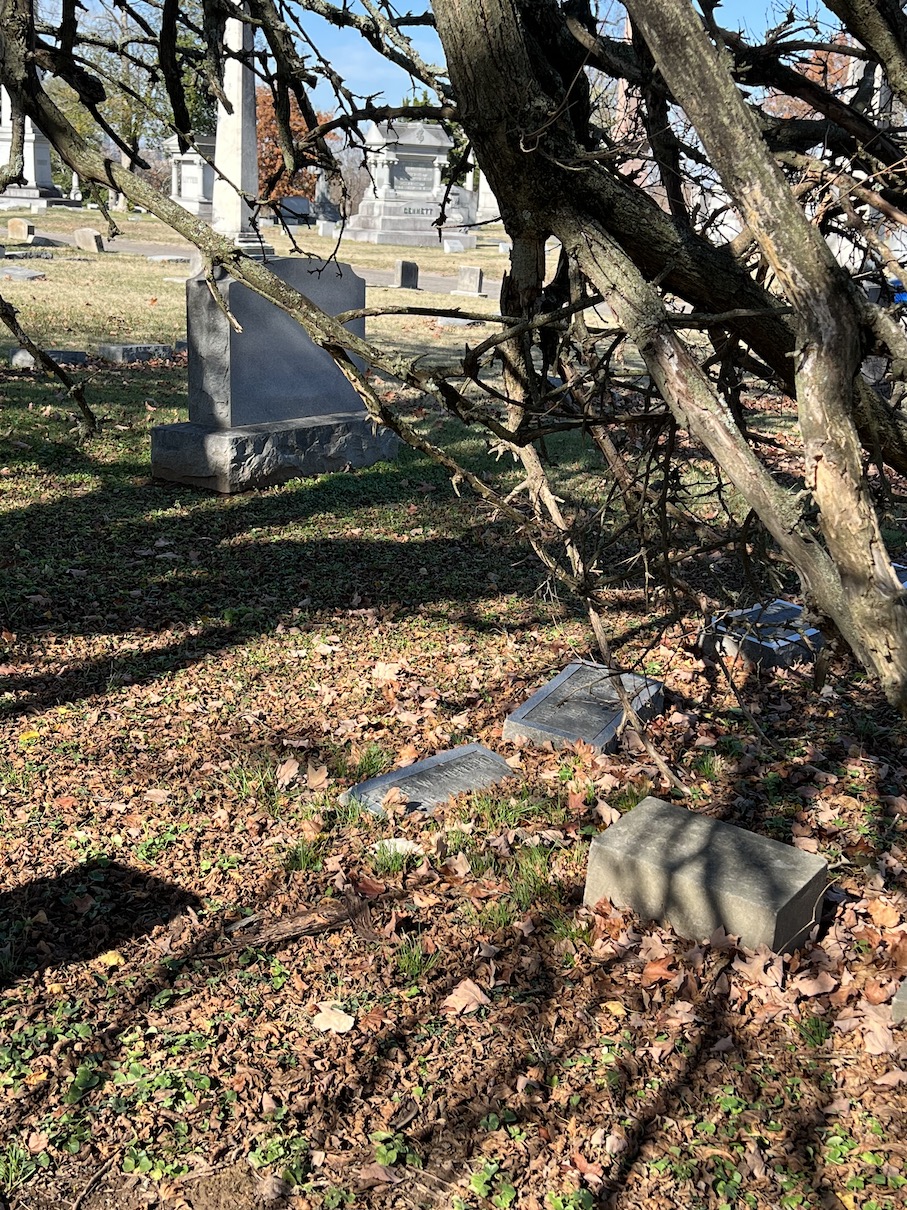 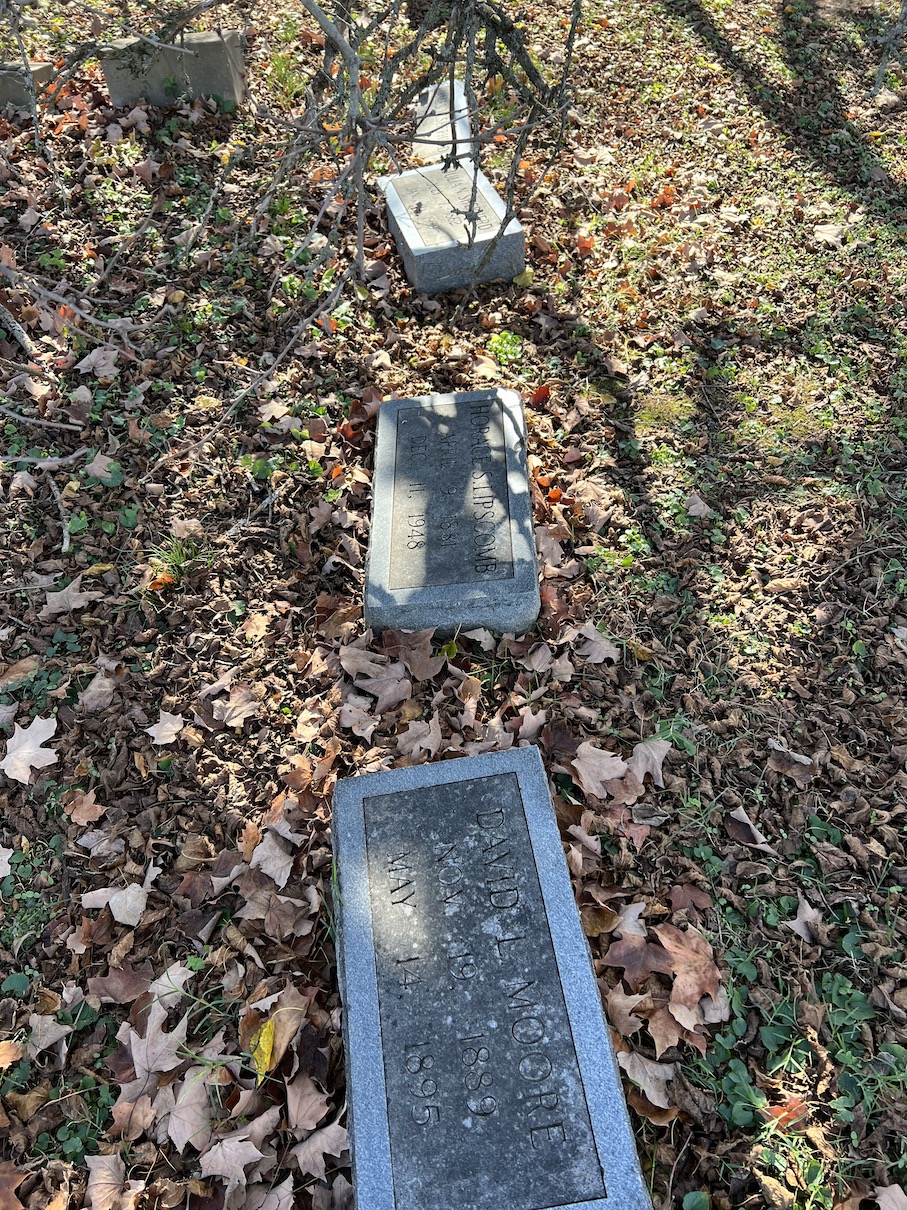 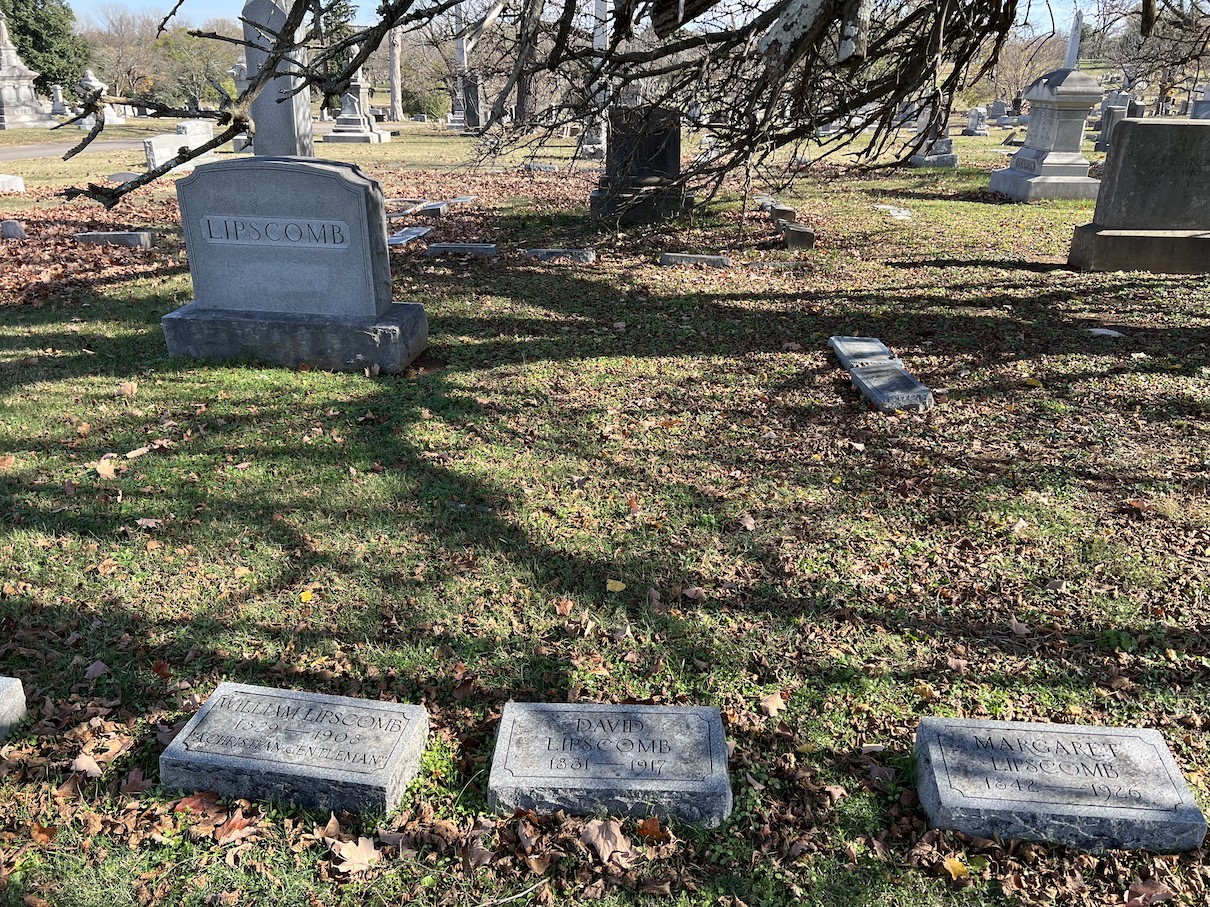 William, David & Margaret Lipscomb in foreground - nephew H.S. Lipscomb on far side of the Lipscomb plot 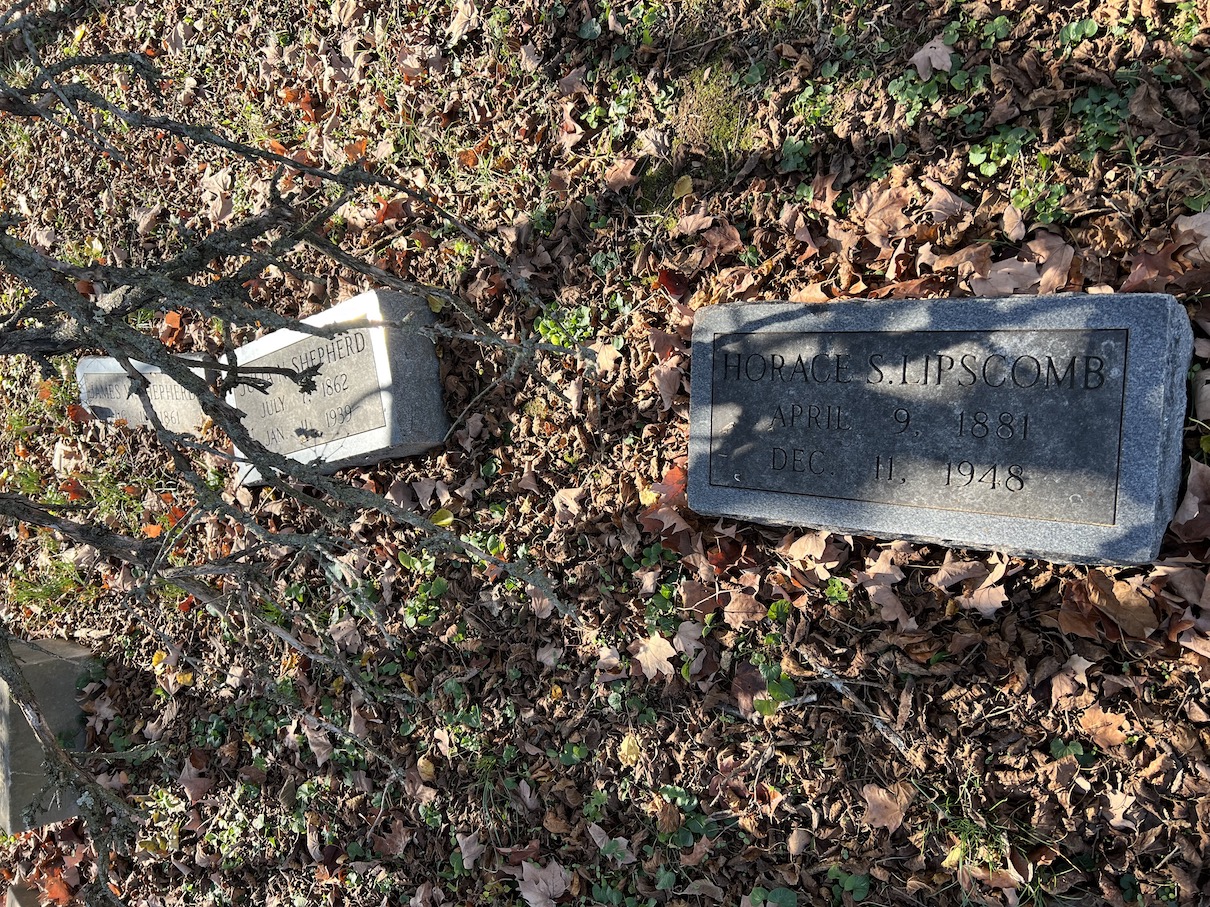 James M. & Julia Shepherd next to the grave of H. S. Lipscomb 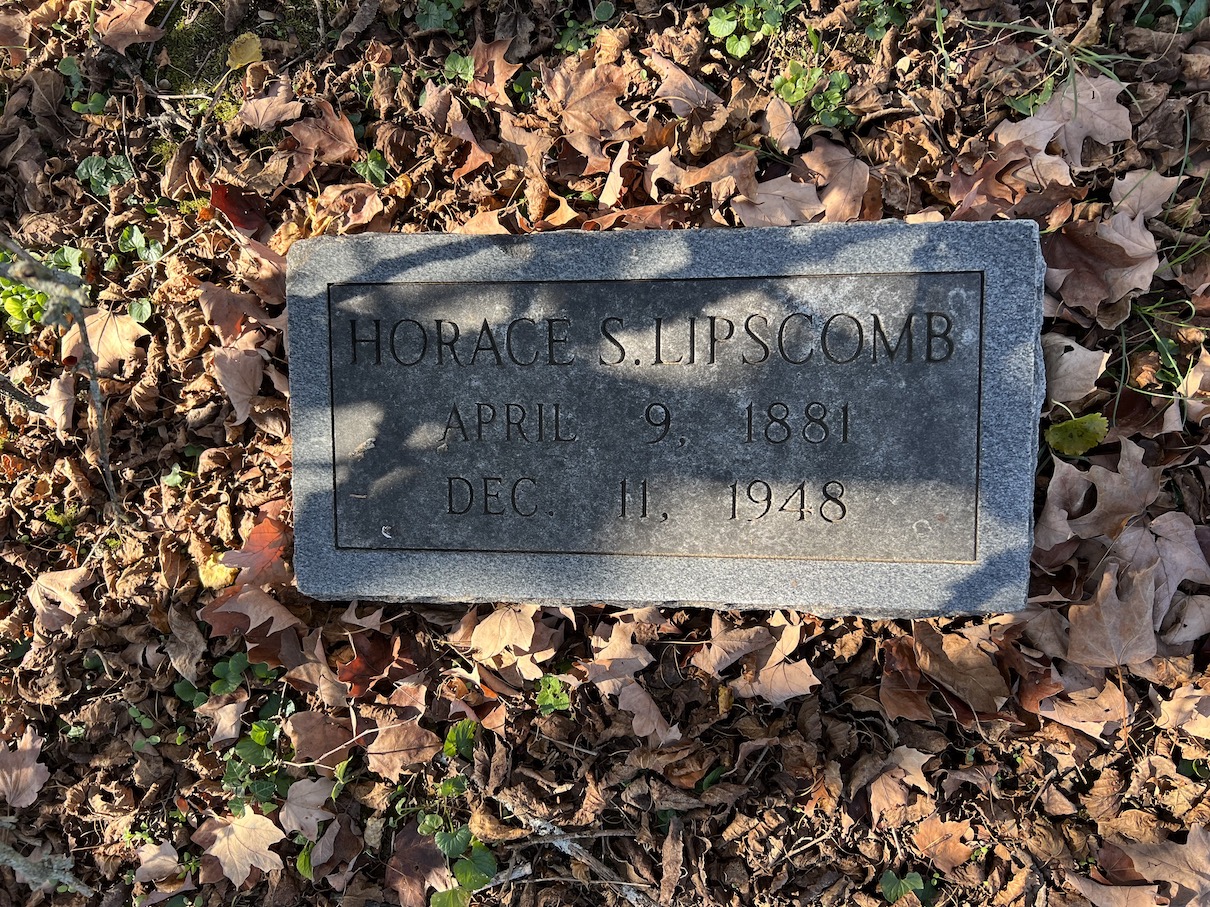