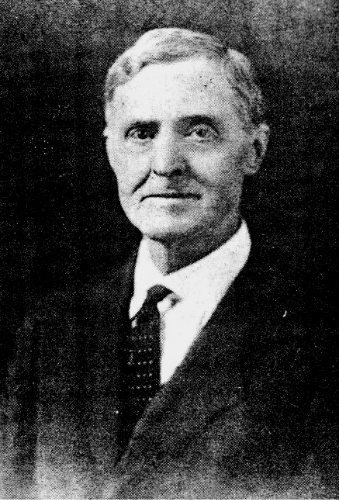 W. B. McQuiddy, of Marshall county, Tenn., was a skillful and practical telegraphist and in the employment of a large railroad corporation before he came to Mars' Hill in 1878. He remained in school two sessions, and developed into an acceptable and successful preacher. On leaving school he preached a while in Middle Tennessee, and then accepted a field of work in Texas. On account of the failure of his wife's health, he gave up preaching in Texas and returned to Tennessee in about a year. He resumed his position as telegraphist for the railroad; but has continued to preach with splendid results as he has had opportunity. He is one of the unadvertised and not very widely known, but very useful, men in his part of the country. He is a true man, a good scholar, a fair speaker and a good preacher in the truest and best sense of the word. He is of the steady, reliable, patient, and faithful kind of men whose chief value to the cause of Christianity is in giving permanence to the work of less stable, but more brilliant preachers.

W. B. McQuiddy Has Gone Home

Brother Will B. McQuiddy died at his home in Bellbuckle, Tenn., on February 2, 1933. He was born in Marshall County, near Farmington, Tenn., October 30, 1853. He was, therefore, more than seventy-nine years old at the time of his death. He attended Mars' Hill College, owned and operated by Brother T. B. Larimore, and his last year there was the school year that closed in June 1880. This was my first year in college and his last; and while there were some years' difference in our ages, we formed a friendship which lasted till his death. He was married to Sister Chappell Wade of Iron City, Tenn., September 6, 1881. His wife was also educated at Mars' Hill, when it was a mixed school of boys and girls. They lived together as husband and wife over fifty-one years, and no two people were better suited to each other than were they. They were reared in about the same atmosphere, and both had the training of a Christian home and lived in about the same Christian environments and attended the same school, which made their companionship as husband and wife very happy. They were also good Christians, and these things united them into a very happy relationship for life with its duties and pleasures. They reared a family of two sons and four daughters, and they lost two children in infancy. Two sons and three daughters are yet on this side to comfort their mother in her declining days. Brother McQuiddy was a brother to J. C. McQuiddy, who was so long connected with the Gospel Advocate. He is survived by two brothers and one sister. The brothers are Henry McQuiddy of near Lewisburg, Tenn., and John McQuiddy of Nashville. Both of these are older than he, and his sister, Sister Orr of near Farmington, is younger.

For a time, after leaving Mars' Hill, he evangelized with his brother, J. C. McQuiddy, in North Alabama and Tennessee. He preached one year at Sweetwater, Texas. But he decided he could do more good by working for the railroad and preaching for the poor in the community where he lived. His home for a while was at Normandy, Tenn. There was no church there, but largely through his influence, work, and liberality a church was established and a nice meetinghouse was built, and the congregation prospered while he was there. For many years he lived at Bellbuckle, Tenn., and was one of the elders of that church till his death. He preached on Sundays in communities around him, and was always a welcome visitor as a preacher and as a friend and brother in any community and in any Christian home.

Brother Will was a good boy, a faithful man, and a true Christian. He was a servant of the Lord for nearly sixty-two years. This was a long life of service, but it was not a service of slavish fear, but a service of love. "God spoke unto Joshua the son of Nun, saying, My servant Moses is dead." The greatest compliment that can be paid to any man is to say, "He was a servant of God," and yet Christ said to his disciples: "Ye are my friends, if ye do the things which I command you. No longer do I call you servants, but I have called you friends." Brother McQuiddy served Christ as a friend; he loved to serve him. His neighbors honored and respected him for his sincerity and devotion to duty. His funeral was attended by more people than any funeral in Bellbuckle in many years. His neighbors will miss him; the town and the community will miss him; the church will miss him; his kinsfolk will miss him; but most of all his faithful wife will miss him. She said to me when I left her after the funeral: "What will I do without Willie?" Sad indeed was the parting, but sweet will be the meeting on the other side. It is good-by now, but time will swiftly pass and soon it will be good morning as they meet in the eternal presence of God. May the Lord deal gently with the widow, and may the children cherish the memory of their father and follow him as he followed Christ. May they be a reunited family in the city of God, the home of the saved.

Funeral Notice In The Nashville Banner 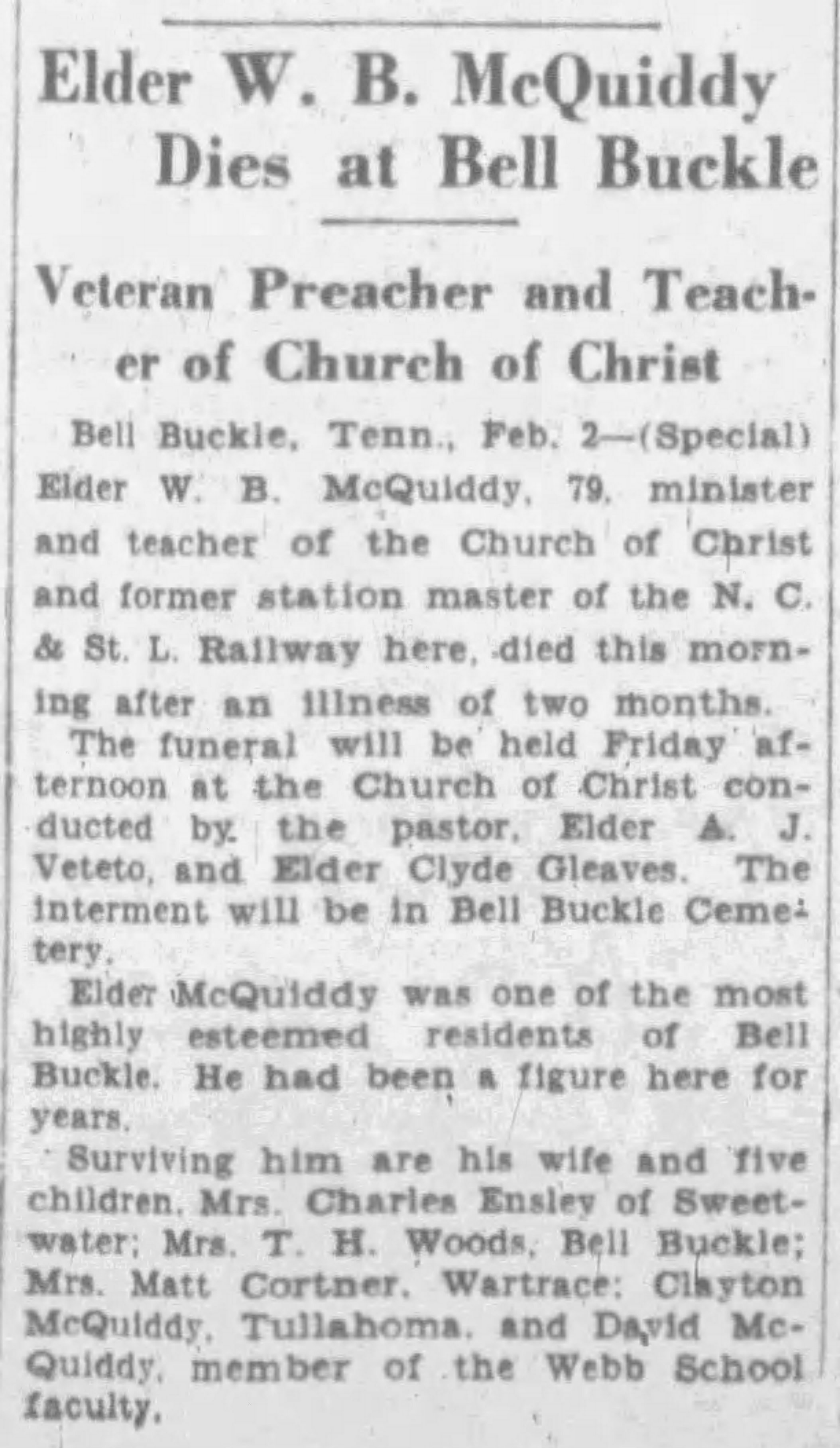 Chappell Wade McQuiddy, eldest daughter of John Dickie and Sarah Trasher Wade, was born near Iron City, Tenn., February 14, 1857; died October 3, 1934, at Bellbuckle, Tenn.  Five children survive: V. C. McQuiddy, Tullahoma; Mrs. William M. Cortner, Mrs. T. H. Woods, and David McQuiddy, Bellbuckle; and Mrs. C. R. Endsley, Sweetwater, Tenn.  Three sisters also survive: Mrs. J. L. Myers, Davis, Okla.; Mrs. J. J. Stutts, St. Joseph, Tenn.; and Mrs. L. C. Carden, Old Hickory, Tenn.  She was baptized early in life.  In the late seventies, while a student at Mars Hill, she met W. B. McQuiddy, whom she married September 6, 1881.  He preceded her to the grave some two years ago.  She was one of the most lovely characters the writer ever knew.  She and her husband were an ideal couple, and leave a rich legacy in their examples as Christians.  The funeral services were conducted by F. B. Srygley and the writer.
G. M. Gleaves.
Gospel Advocate, June 27, 1935, page 623.

The Hazel Cemetery is located just south of Bell Buckle, Tennessee on Hwy. 269. Take I-24 in southern Tennessee to Beechgrove and take Hwy 64 south to Hwy. 82. Head into Bell Buckle. (A cool little retro town on railroad tracks - plenty of gift shopping). Turn left across tracks and head south on Hwy. 269. The cemetery is just down the road on the right. Head into the cemetery and bear to your left. As soon as the drive diverts you toward the rear of the cemetery, look to your right for the McQuiddy plot close to the drive. 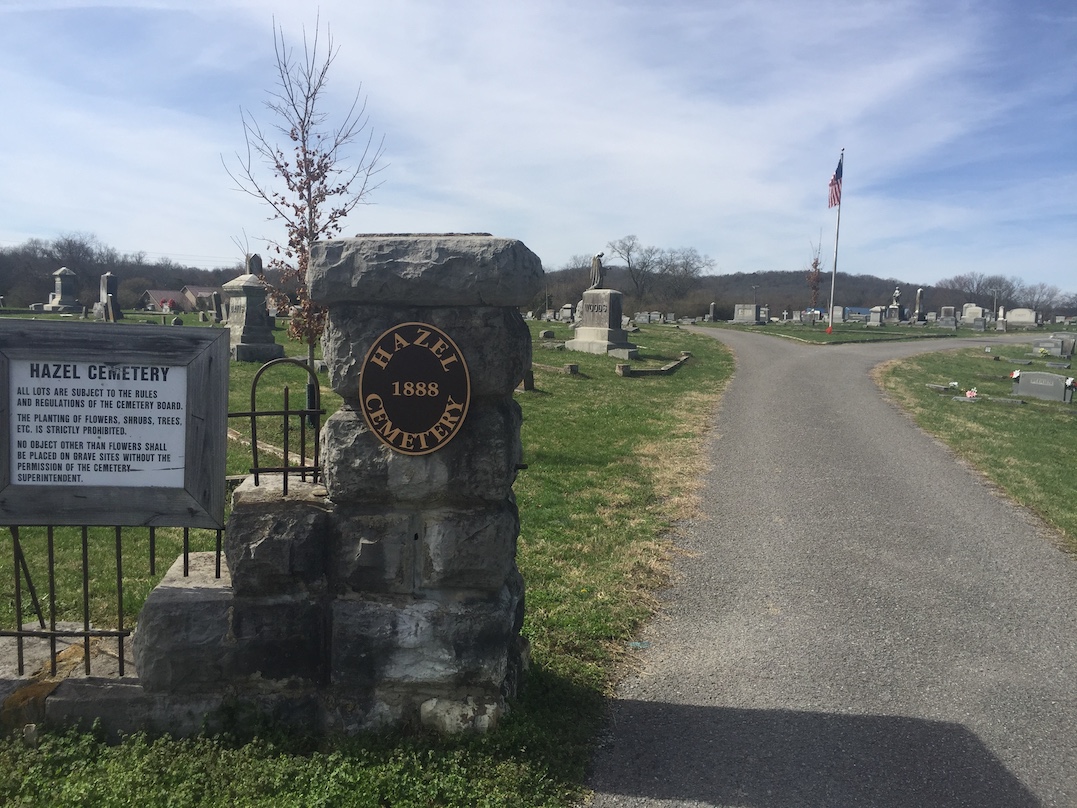 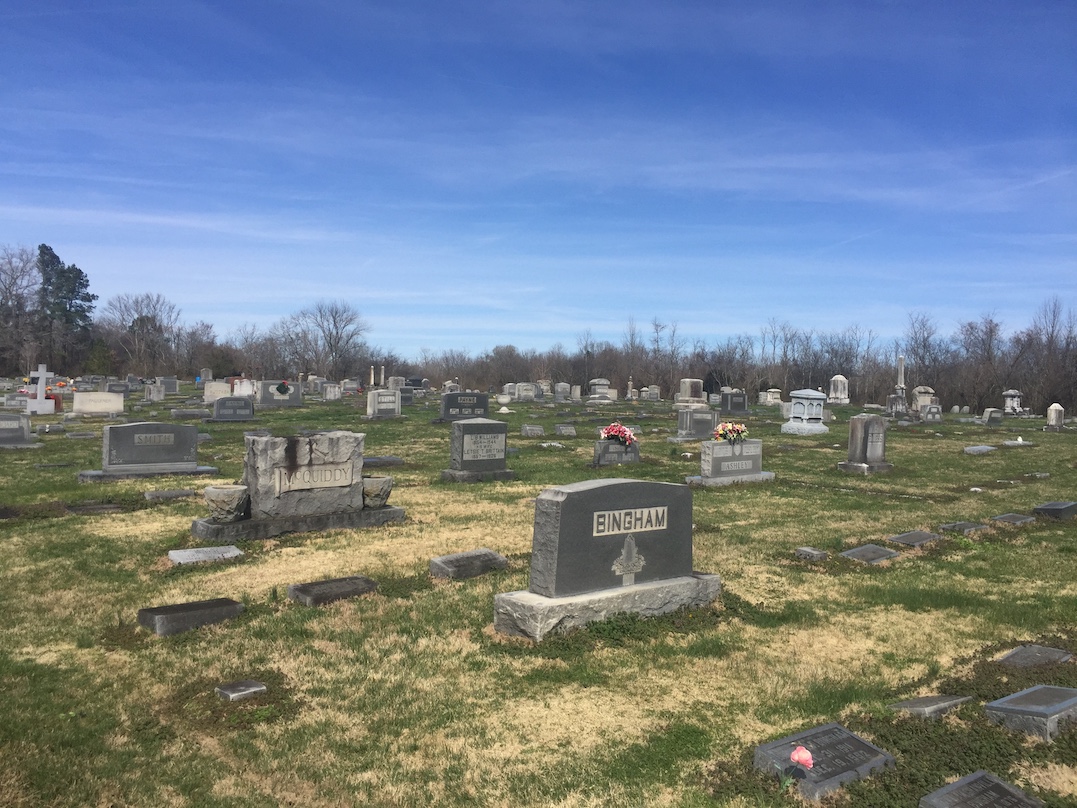 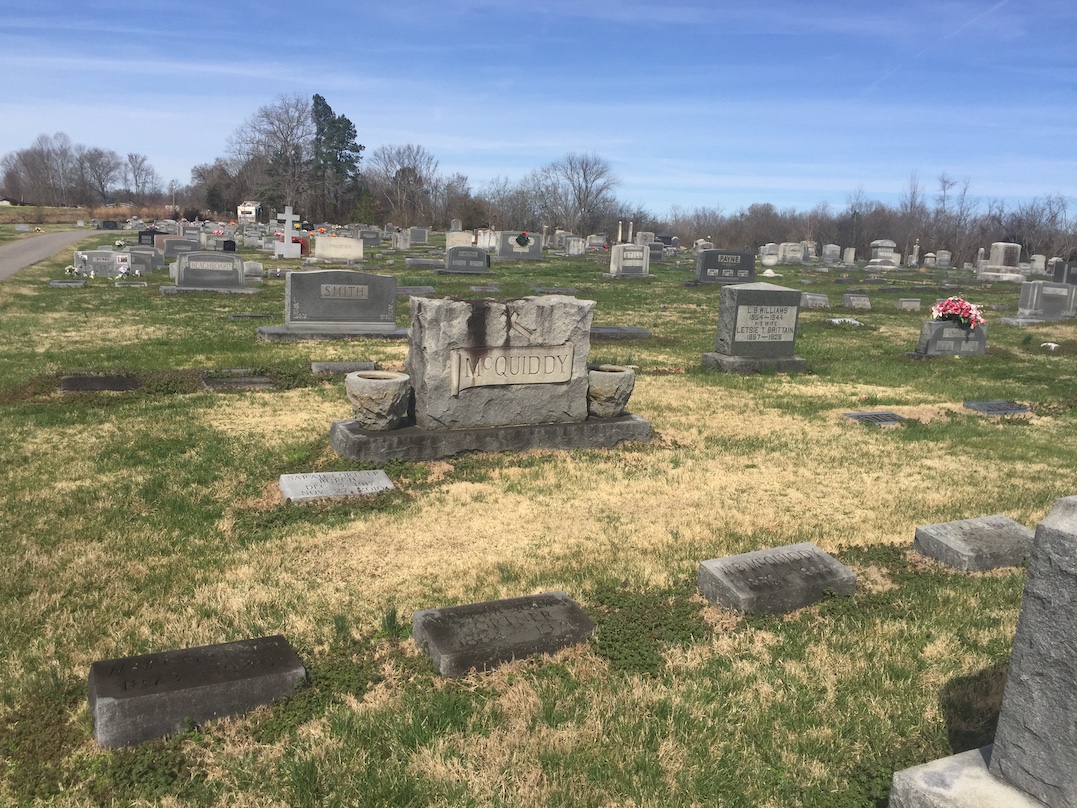 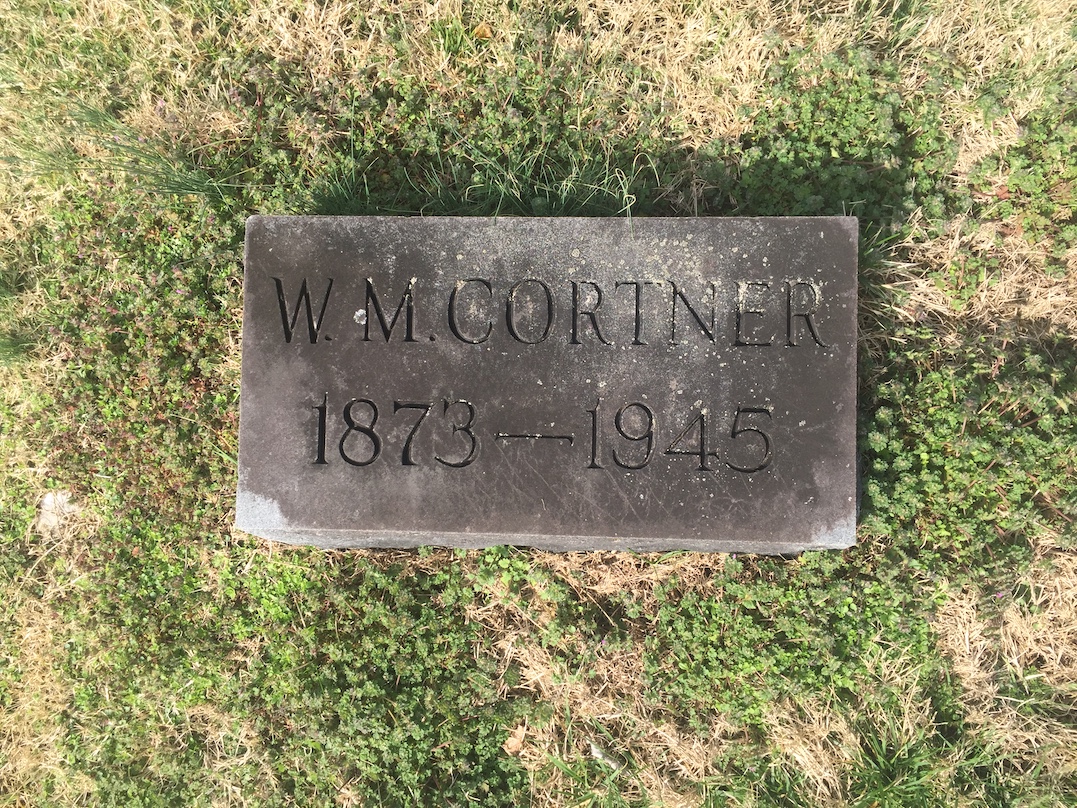 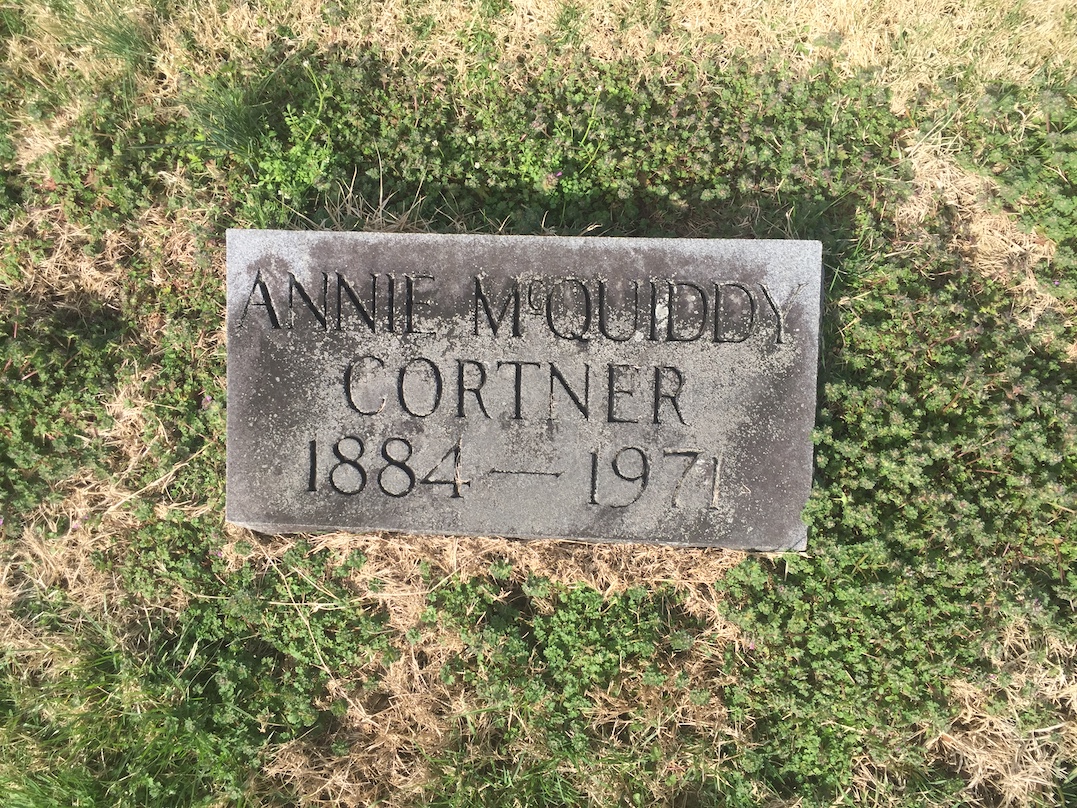 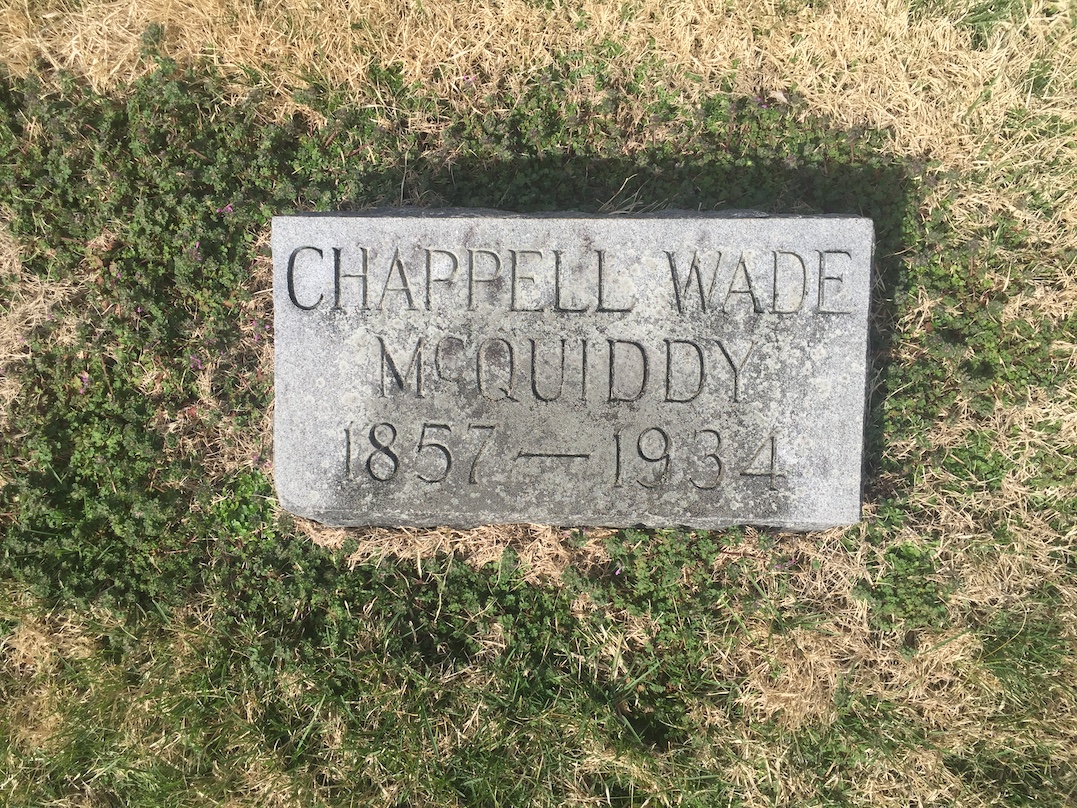 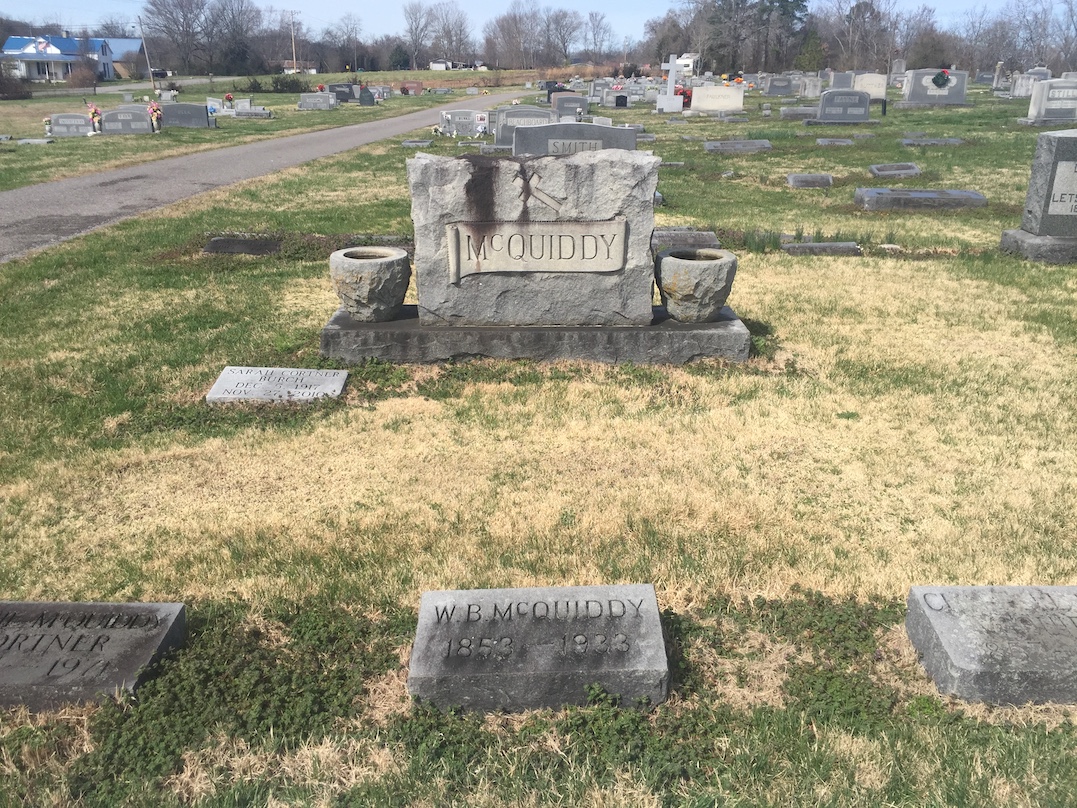