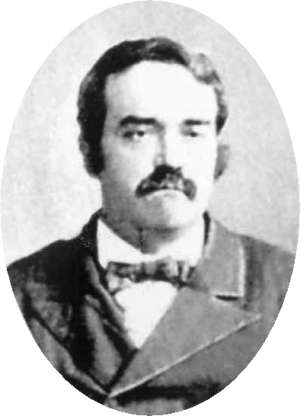 Hyram Pharris was a gospel preacher who lived and worked in the region around Gainesboro, Tennessee. He wrote many reports of his work and articles for the Gospel Advocate. Hiram was married three times, and fathered around fifteen children. His first wife, Louisiana, gave birth to four children. Their daughter, Mary, was the mother of Jackson County preacher Hiram Way. He was also the great, great grandfather of four preaching brothers, Leamon, Bill, Don, and Dowell Flatt. He died September 2, 1929. His body was buried in the Pharris Cemetery. 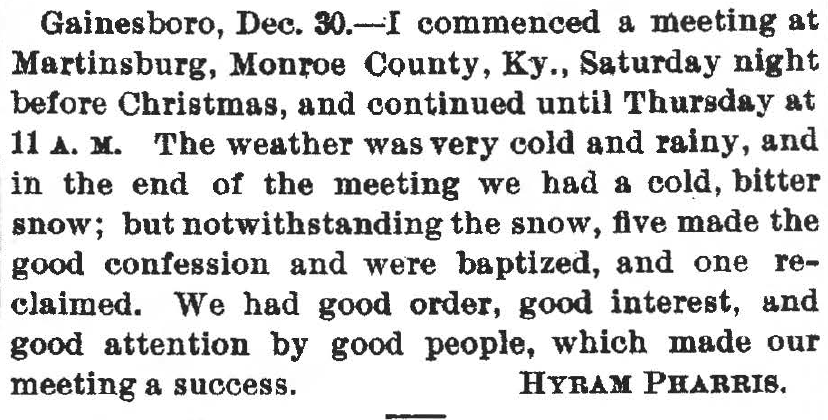 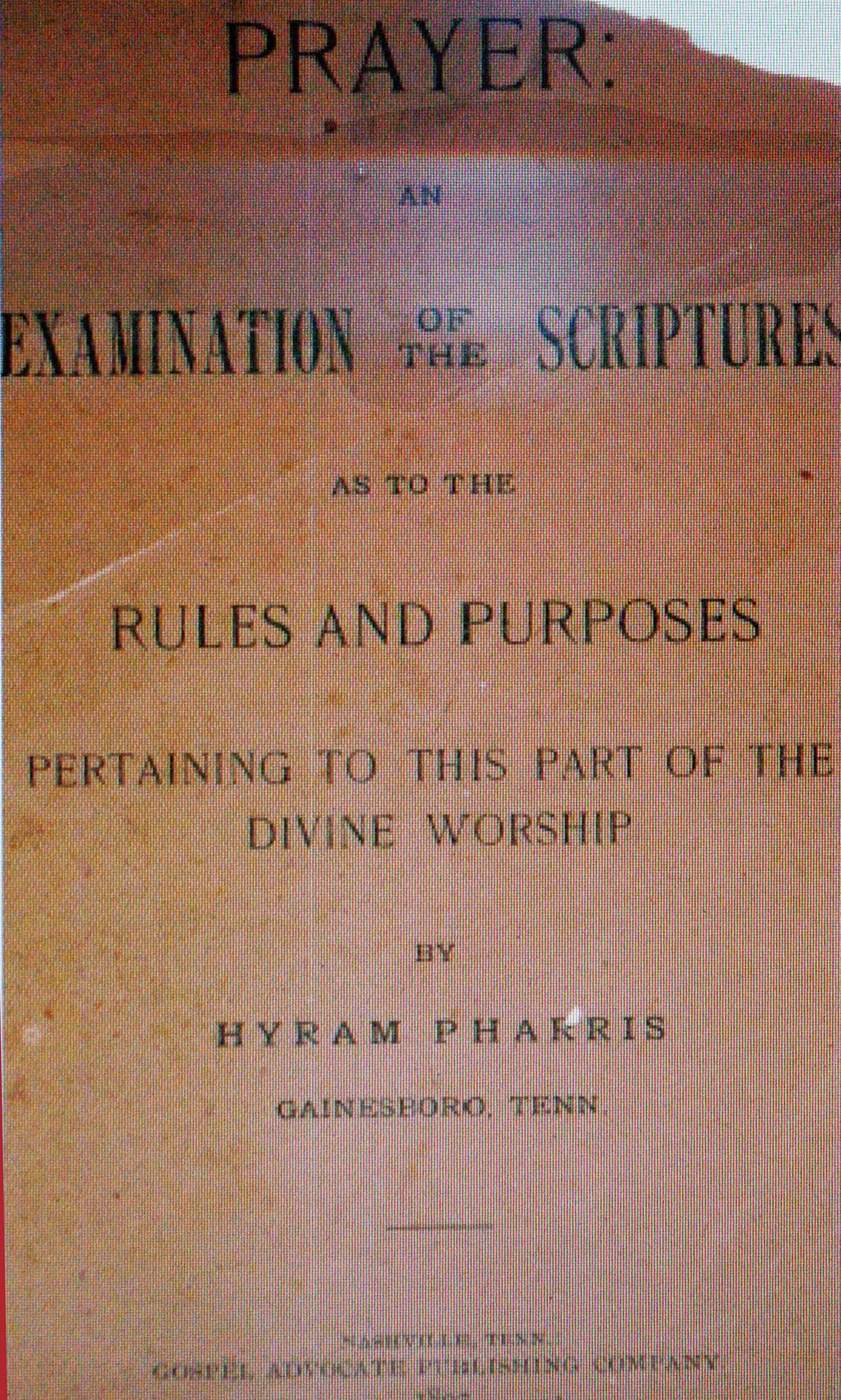 A Tract On Prayer

"We have just examined a treatise on "Prayer—an examination of the scriptures as to the rules and purposes pertaining to that part of the worship, by Hyram Pharris, Gainesboro, Tenn." It is a 56-page tract, printed by the Gospel Advocate Publishing Co. It is a close examination of the scriptures as to the circumstances, times, and conditions in which, and of the persons by whom, prayer may be acceptably made. The teachings are sound and scriptural, and will help those who will study them. The leading thought is that prayer must be according to the will of God, and the blessings secured by prayer must come through compliance with the divine order. A circulation and reading of the tract will do good. It is written in a cogent and earnest style that will hold the attention to the end." -David Lipscomb - Gospel Advocate, 02.22.1894, p.117.

Directions To The Grave of Hiram Pharris

Hiram Pharris is buried in the Pharris Cemetery near Livingston, Tennessee. The physical address of the cemetery is 2432 Old State Hwy. 56, (McCoinsville Rd.) Gainesboro, Tennessee. 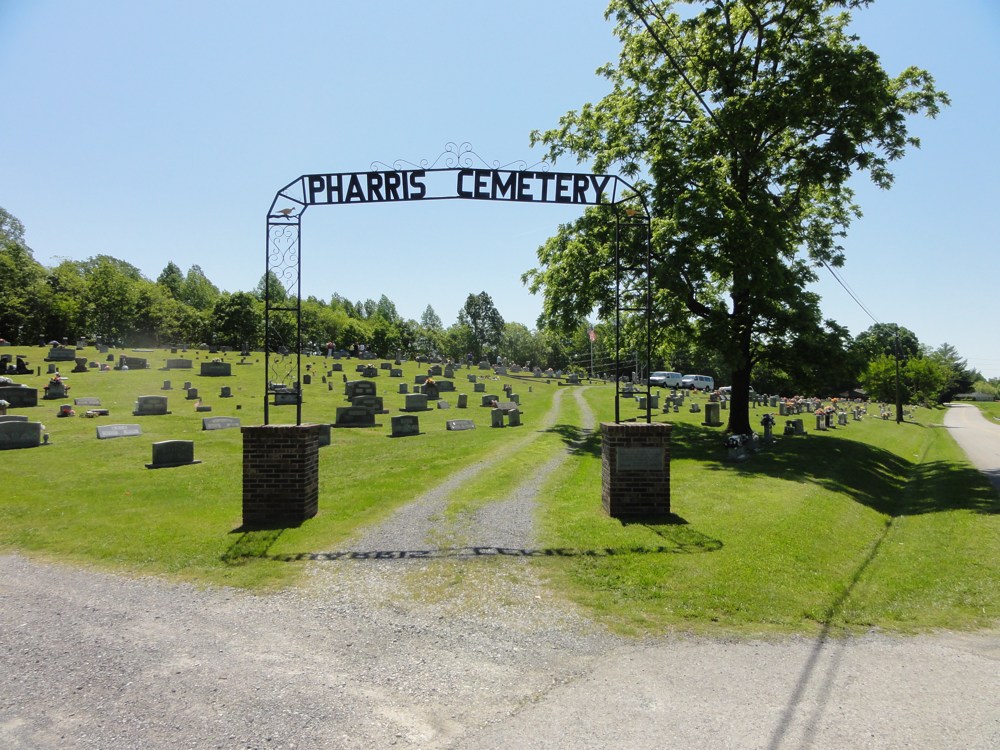 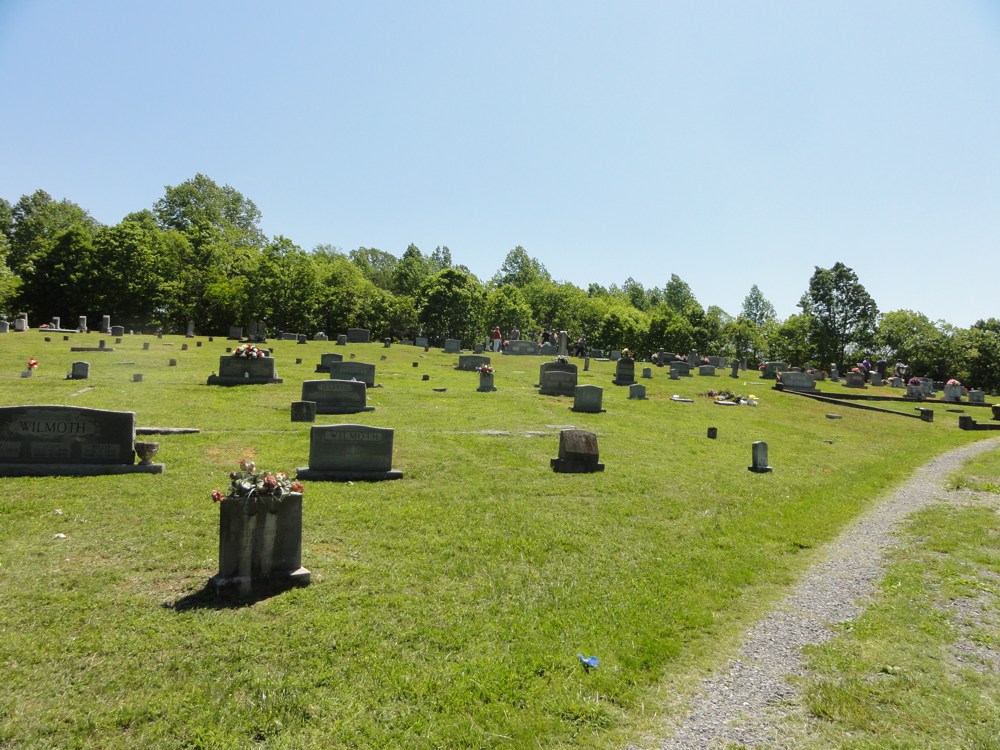 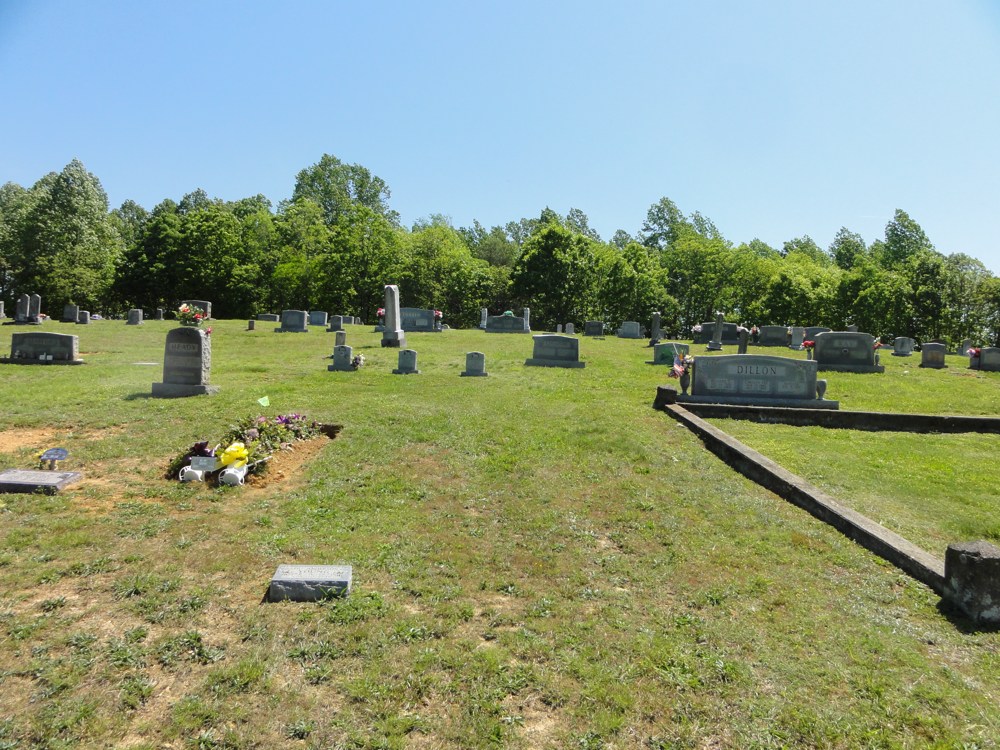 Pharris Plot At Top Of Hill 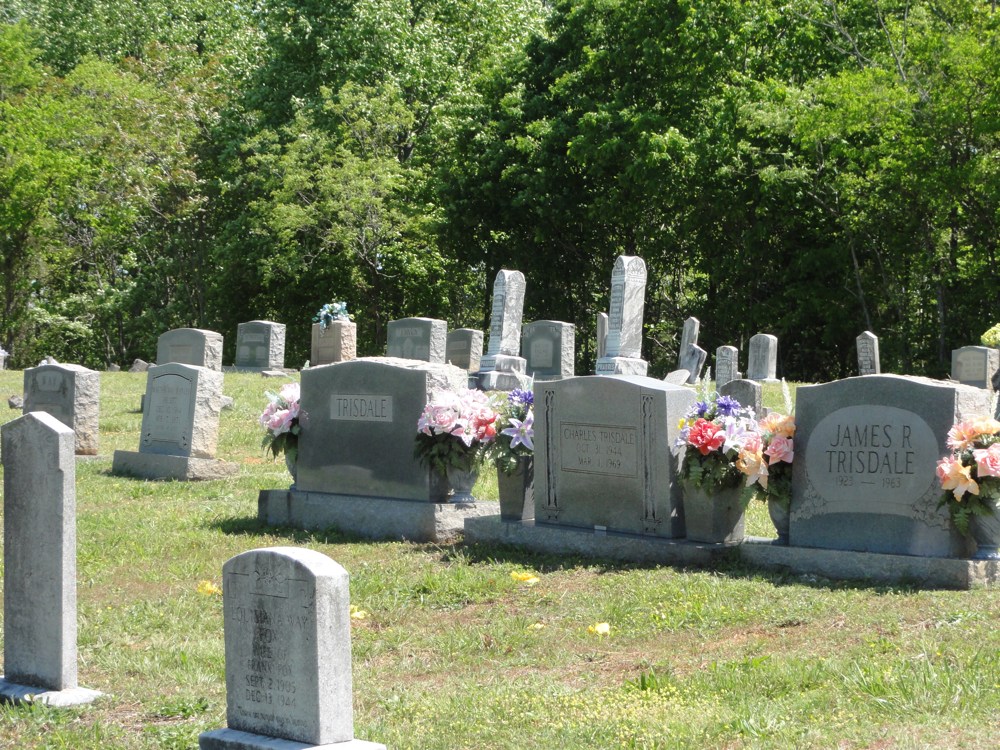 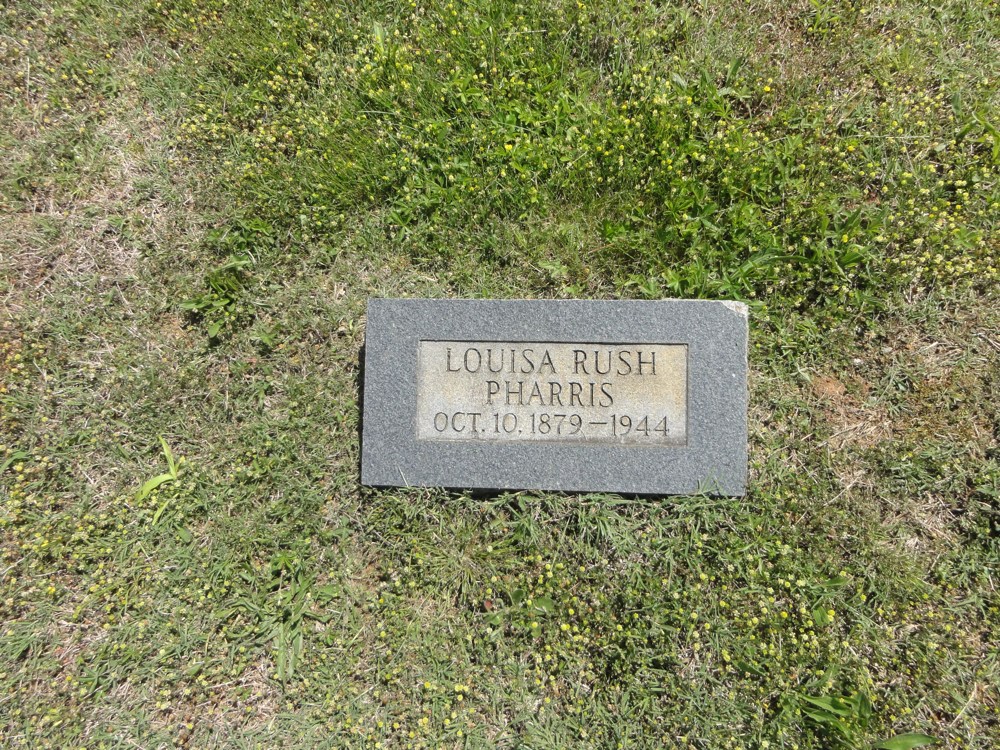 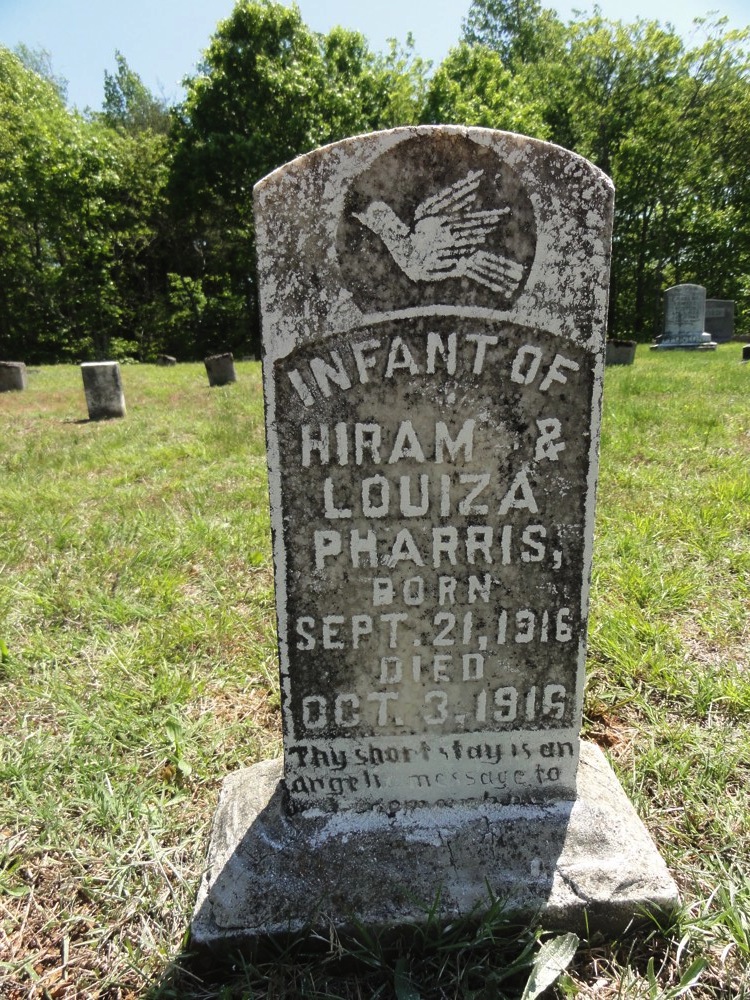 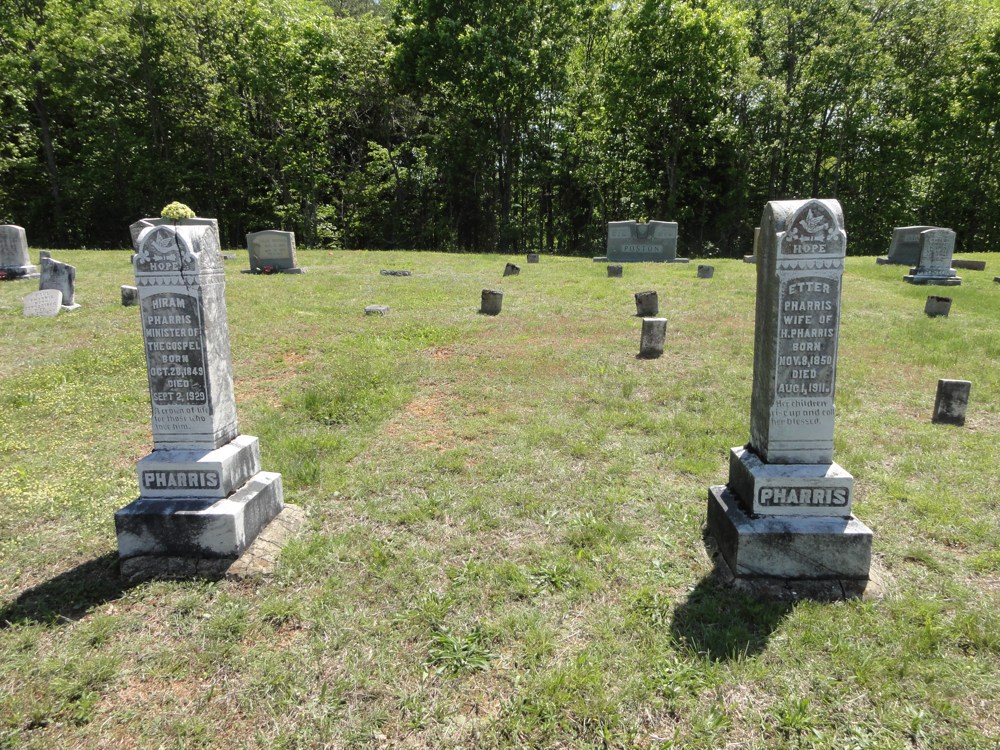 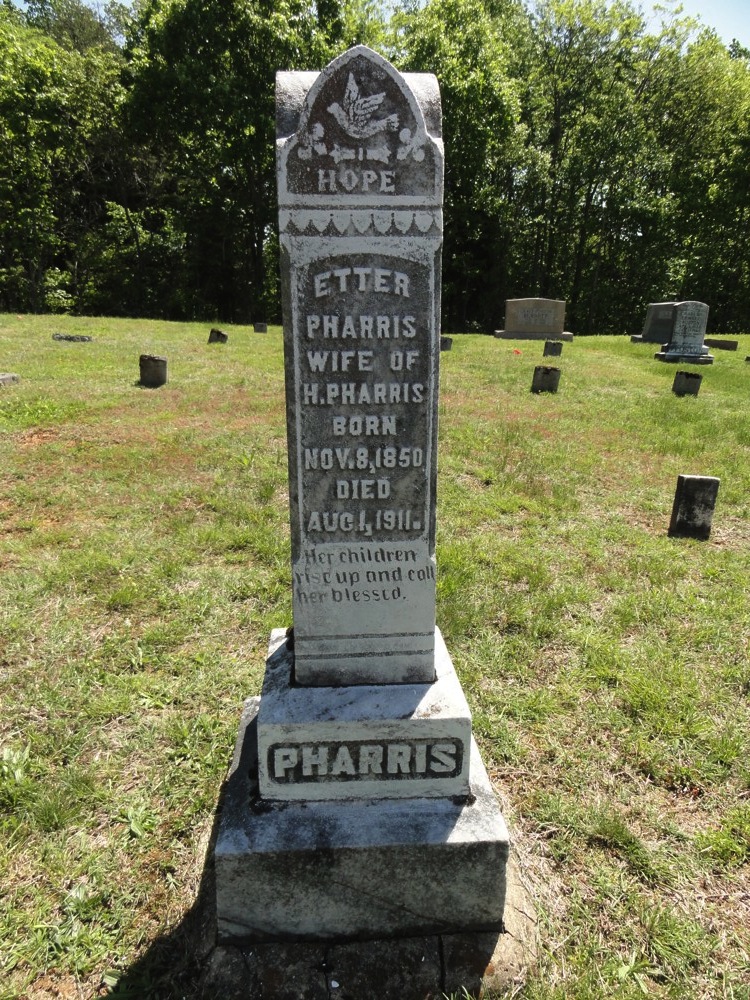 Perlina Etter Pharris, wife of Elder Hiram Pharris and daughter of Curtis and Perlina Hall, was born on November 8, 1850, and died at her home near Gainesboro. Tenn. on August 1, 1911. The mortal body was interred at the family cemetery near by. She was married to Bailey W. Hampton about 1870. To them were born one daughter, Anna, who died while young and was buried in Kentucky. Hampton and wife moved to Texas, where he survived only a short time and was buried there. She was married to Hiram Pharris on July 27, 1876. This union was blessed with nine children–six sons and three daughters. Of these, six survive her–two sons and one daughter–Paul, Timothy, and Floy–having died while young. Four children–Louis, Grover, Robert, and Mrs. Lillie Mabry–were at the funeral; Fowler, of Coalinga, Cal., and Mrs. H. Loftis, of Frederick, Okla., were absent. She also assumed the responsibility of a mother in the care of her second husband's four children–Walter and James Pharris, of Hillsboro, Texas, and Mary Way and Loulie Heady, of Jackson County, Tenn.

Her mother died when Sister Pharris was an infant, and her father died when she was nine years of age. She was reared by her uncle and aunt, Thomas and Polly Rose. Only two of her father's family survive her–Robert Hall, of Hopkinsville. Ky., and Addison Hall, of San Francisco, Cal.

Sister Pharris became obedient to God in July, 1870, being baptized by William Allen in Sugar Creek, Jackson County, Tenn. The writer, who spoke at the funeral, knew Sister Pharris from his childhood. Judging by her fruits, the bent of her life was to do the will of God. She loved God and sought to please him. She was truly a homemaker–a fond mother, a faithful wife, a considerate neighbor, an unselfish friend. She was of a cheerful, happy, hopeful disposition. Her chaste conversation and dignity of simplicity showed the beautiful spiritual adornment of the hidden matt of the heart. She had her faults, foibles, failures, but she also bad "fruit to abound to her account" in watchfulness, earnestness, piety. Like many other wives and mothers, while her husband was away in meetings, she took up the obligations and responsibilities of home, to guide the affairs-care for the children, look after the stock, run the farm. She was as content to serve in what seems a humble station, but, after all, among the greatest. Sister Pharris had a premonition that she would not recover, and a vision in which the writer was standing by her bed, but she died without following of his arrival in Tennessee. "In a dream, in a. vision of the night, when deep sleep falleth upon men, in slumberings upon the bed; then he openeth the ears of men. and sealeth their instruction." Her last audible prayer was: “O Lord, I come to thee with a fainting heart and trembling hands. O, receive my soul at last; for I would not live always. I ask not to stay." Just before dissolution occurred she seemed to eaten a vision of that ''unseen country." and said to the children that stood around; "l hear the music ringing; stop and wait, let me go. Salvation!" Then the good mother in Israel joined the choir invisible. -L. J. JACKSON.
-Gospel Advocate, August 31, 1911, page 984. 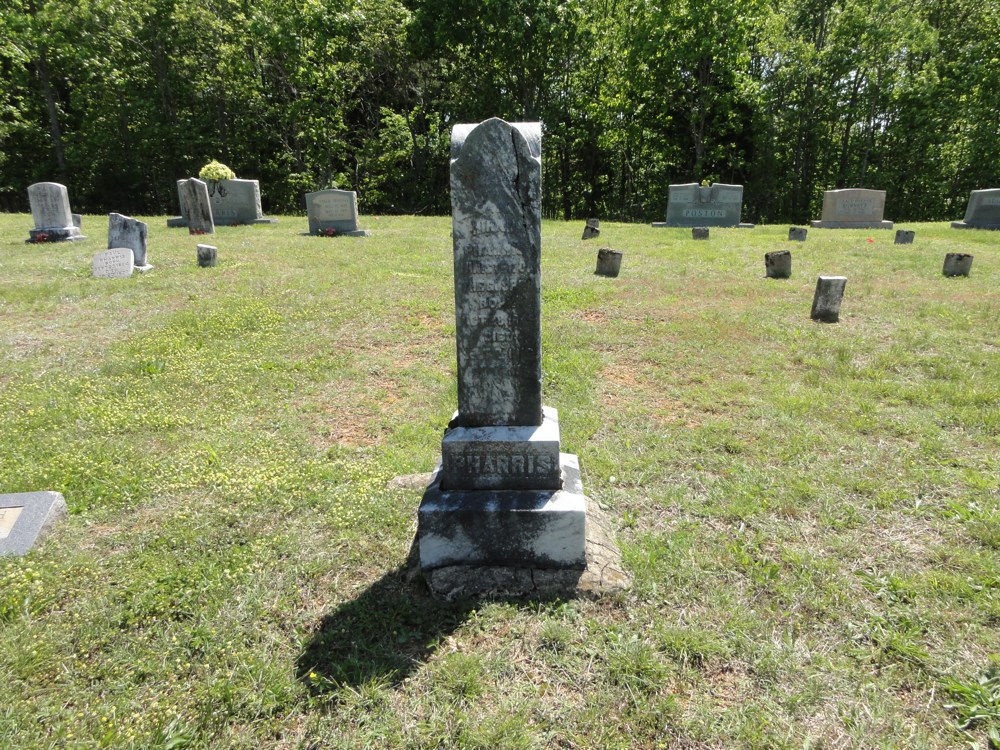 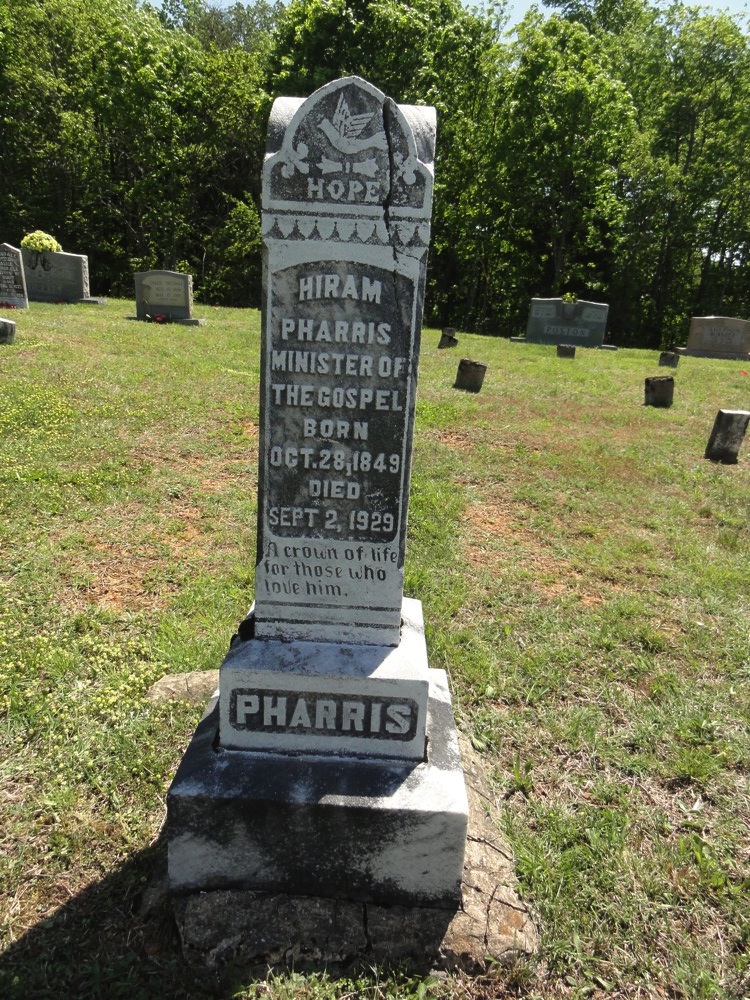 In 2010 Charlie Wayne Kilpatrick sent me photos he had taken while visiting the Pharris Cemetery. They were used to produce a website initially. In May, 2013, you web editor took a group from Southeast Institute Of Biblical Studies on a Restoration Tour through Tennessee and Kentucky. We visited the Pharris Cemetery, where I was able to get good photos of my own. I added these to the site on 09.06.2013. Hiram Pharris was a great preacher in the area, and helped to plant and build churches all over the area surrounding Gainesboro, Tennessee.

*Hyram/Hiram - These spellings alternatively appeared in writings and reports from Hyram Pharris. On his grave the spelling is "Hiram," but on the tract he wrote on prayer, the author's name is Hyram Pharris. It would seem that the spelling was interchangeable.