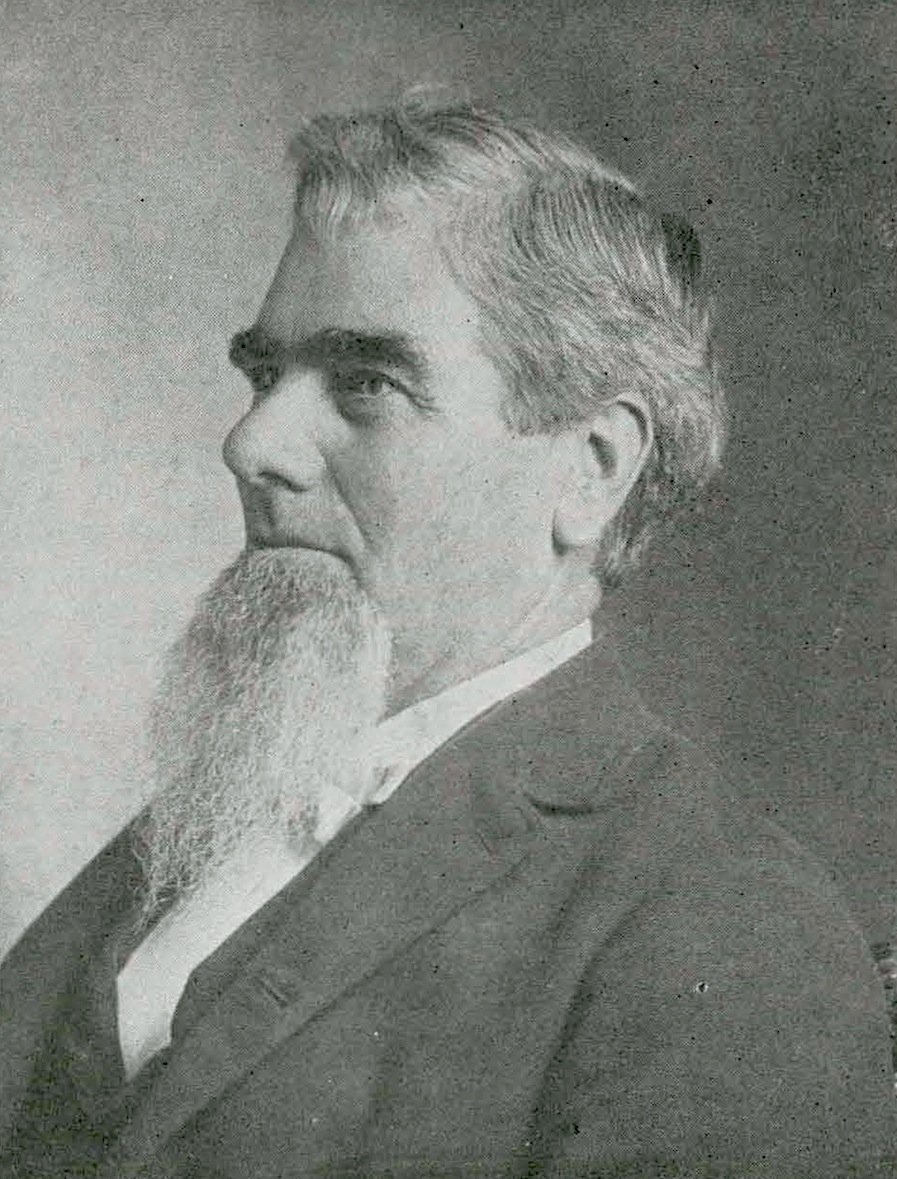 The measure of a man may be taken from many angles. A very correct estimate of the man may be obtained by getting the range on certain elements of his personality or by observing the influence of his life after he has finished his earthly career. "Blessed are the dead who die in the Lord from henceforth: yea, saith the Spirit, that they may rest from their labors; for their works follow with them." If a man should be measured by his loyalty to the church of our Lord, by his love of the truth, by his service to his fellow men, by his usefulness in his community, and by his steadfastness in righteousness, then P. G. Potter was a great man.

Perry Green Potter was born in De Kalb County, Tennessee, September 27, 1842. He was the sixth child of a family of fourteen children. His parents were Watson and Harriet Magness Potter. P. G. Potter was reared by honest, industrious parents. They were of the Baptist persuasion in religion. They belonged to the Primitive Baptist Church. The greatest and strongest element of the practical value of the tenets of faith in this church at that time were truthfulness and honesty. Indeed, these cardinal principles formed the basis of their religious life and controlled their relation to their fellows. P. G. Potter was reared in "the straitest sect" of the Primitive Baptist faith. When he grew to manhood, he "received the call as an elect child of God," related his experience at Bildad, and was voted upon by the members of the church as being worthy of membership in the Baptist fold as one of the sheep. He knew nothing about the Bible. In fact, one did not have to know the Bible in order to become a member of the Baptist Church. P. G. Potter was not taught by his parents to study the Bible, neither did the preachers of that church know the Bible or attempt to preach much of it. They were pious and very religious. They had a zeal for the Baptist faith, but this was not according to the knowledge gained from the reading of God's word.

Young Potter was about nineteen years old when the Civil War (correctly speaking, uncivil war) began. He and a number of his associates enlisted in the Confederate Army. He was in the battle of Stone River, or Murfreesboro. He was in ill health for some time while in the army and was finally paroled on account of sickness. His opportunities for an education were very poor. He attended school a short time under the tutorage of Tillman Seitz. He was an apt student and learned readily. The last year of the war he taught school in Hickman County, Tennessee. He married, the same year, Miss Melvina Webb. Six children were born to this union. All preceded him to the grave, save one child.

P. G. Potter moved to Dibrell, Tenn., in 1875, and engaged in the mercantile business. There were only three dwelling houses there at that time. He desired to make a useful citizen and began to encourage his neighbor's and friends to live the Christian life. He was not sure that he had received a "call to preach," but he began publicly to exhort his Baptist brethren and sisters to live faithful to the tenets of the Baptist Church. He began to read the Bible to find something to talk about, and became interested in the study of the Bible. There was a small band of disciples worshiping at Old Hawkins. This was only a mile from his home. Frequently he would go to the worship and hear the preaching. The lamented J. M. Kidwill was preaching there at that time; also, H. L. Walling preached there frequently. P. G. Potter thought that he could show by the New Testament that the people called" Campbellites" were wrong and that the Baptist Church was right. He was honest enough to make an investigation by reading the Bible, and courageous enough to contend humbly for what he thought to be right.

He soon began to doubt the Scripturalness of some of the claims. He was not willing to give up his church affiliation because of the few points which he saw were not in harmony with the New Testament. He thought that he could get the Baptist Church to correct its errors. He attempted to do this, but met with strong opposition. It seems that the traditions of man had such a deep hold upon his fellow members of the Baptist Church and that prejudice against the church of Christ was so deep-rooted that he could not do anything by way of correcting the errors which he saw were taught and practiced in the Baptist Church. For a time he was confused and undecided as to what he should do. He himself had been taught to hold prejudice against the church of Christ. He had much confidence in Brother H. L. Walling, so he had many private conversations with him on the subject of religion. Finally, through Brother Walling's influence and guided by the New Testament teachings, he decided to leave the Baptist Church with all its traditions and be just a Christian, a member of the body of Christ. All of his relatives were of the Baptist faith, and even his good wife stoutly opposed his leaving the Baptist Church. He had no one among his relatives to encourage him in accepting the truth, but all were opposed to him. He had a hard fight, but he won the victory. He soon became a very influential member of the church, and through his influence a new church house was built in Dibrell, in Warren County, and named Mount Zion. Brother Potter became an elder in the congregation and was such to the end of his days on earth. He did not consider himself a preacher, yet he preached much. He taught the Bible to his neighbors and their children weekly, and frequently preached for the congregation. He helped to build up churches in neighboring communities. Brother Potter was a timid man, and was impelled to take public part only because he felt it his duty and there was none other in the community who could do his work. Brother Potter's teaching or preaching was simple and direct. He made no claim to oratory or eloquent speaking. He loved the truth and loved his fellow man; he loved righteousness and desired all to come to a knowledge of the truth.

No man in Warren County of his generation did more to build up the community in which he lived than did P. G. Potter. It was through his influence and efforts that a strong congregation was established at Mount Zion. Brother Potter saw the need of an education. He saw that he could be a greater blessing to, his community by encouraging the establishment of a better school. He and a few others established what was then called "Dibrell College." This college rapidly grew in prominence and became a great blessing to the young people of that section of the country.

Brother Potter was president of the board of directors for a number of years. He fostered the college and helped it to fulfill its mission. Through his influence some of the best educators of the upland country taught in this college. The college continued until the movement of high schools absorbed the educational interests of the country, and then Dibrell College became Dibrell High School. Brother Potter was a successful merchant. He owned and operated a good farm in connection with his mercantile business. But, with all these interests, he found time to serve his community in many ways. People had confidence in him and called upon him in times of distress and sorrow. He probably preached more funerals than any other man in that section of the country, and he married more people than all the other preachers. Through his influence the community became one of the best and most cultured in that section of the country. Brother Potter's life was a great benediction to that community. He preached the gospel more by the life that he lived than by his public teaching.

It was Brother Potter's custom to hold family prayers each morning. He never became too busy on his farm or in the store to take his time from his family worship. His good wife joined him in this worship and encouraged him in his work of faith and labor of love. She was brought to see the truth through his teaching and the noble life which he lived. In his family worship, he always invited his visitors and servants or hired hands to join with him in the worship. His home was the home of preachers. He lived for the good that he could do and the service that he could render. He was not only a pillar in the church, but he was a pillar in the community life.

Brother Potter lived to a ripe old age. He was conservative in his habits and simple in his manner of living. He died on March 16, 1924, at the age of eighty-one years, five months, and nineteen days. He was buried by the side of his wife, who had preceded him thirteen years. I wish it were in my power to pay a just tribute to this good man, who honored God and served his fellow men.

Directions To The Grave of P.G. Potter

P.G. Potter and family are buried in the Webb Cemetery in Bluff Springs, Warren County, Tennessee. In central Tennessee, take I-24 to Manchester and head east on Hwy. 55 toward to McMinnville. Go through McMinnville and head north on Hwy. 56. Go about 8 1/2 miles north and turn right on Ray Foster Road. Go about 1 1/2 miles and turn right on Bluff Springs Road. Take the first right and head up the the Bliff Springs church of Christ. Enter Webb cemetery and drive to the rear of the cemetery and stop. The Potter plot will be on your right, about the third full row from the rear. 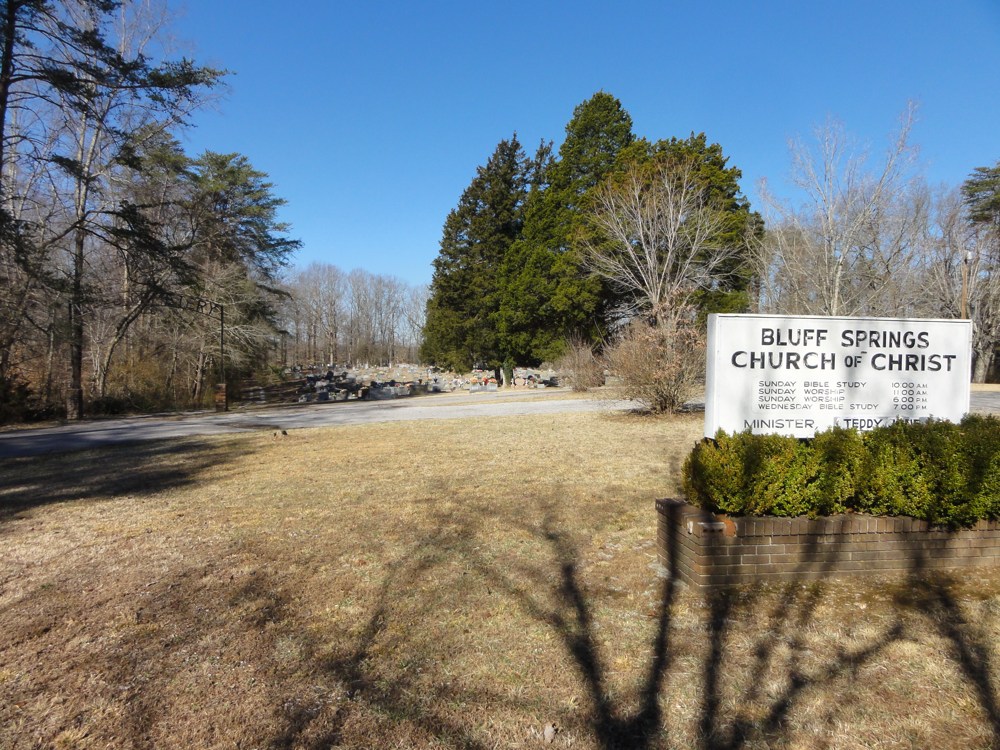 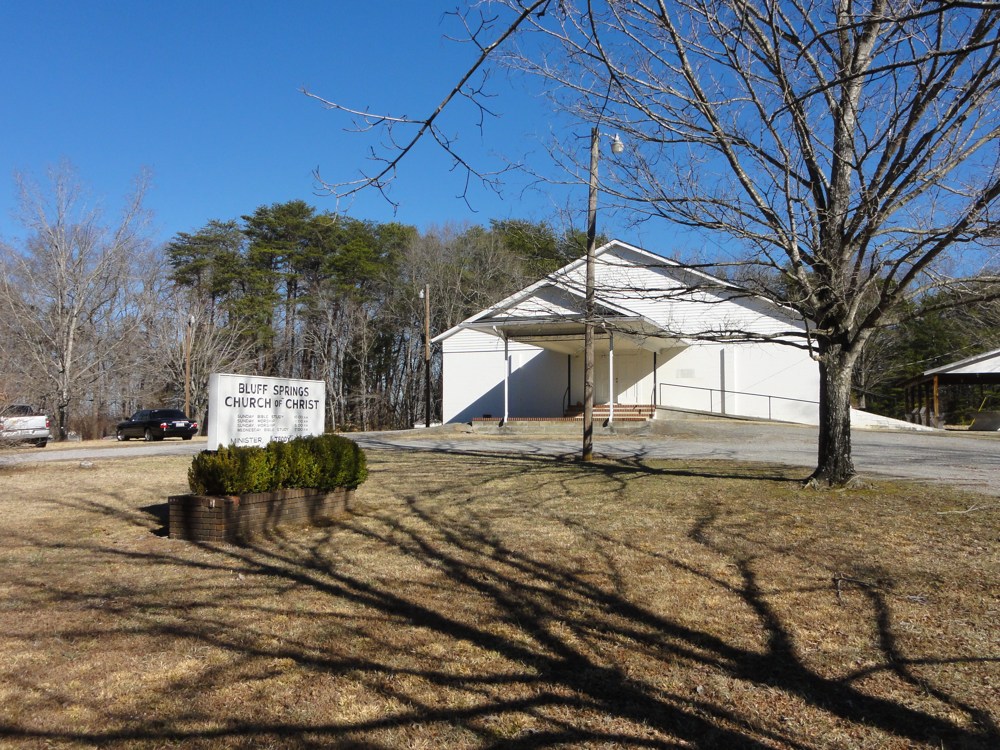 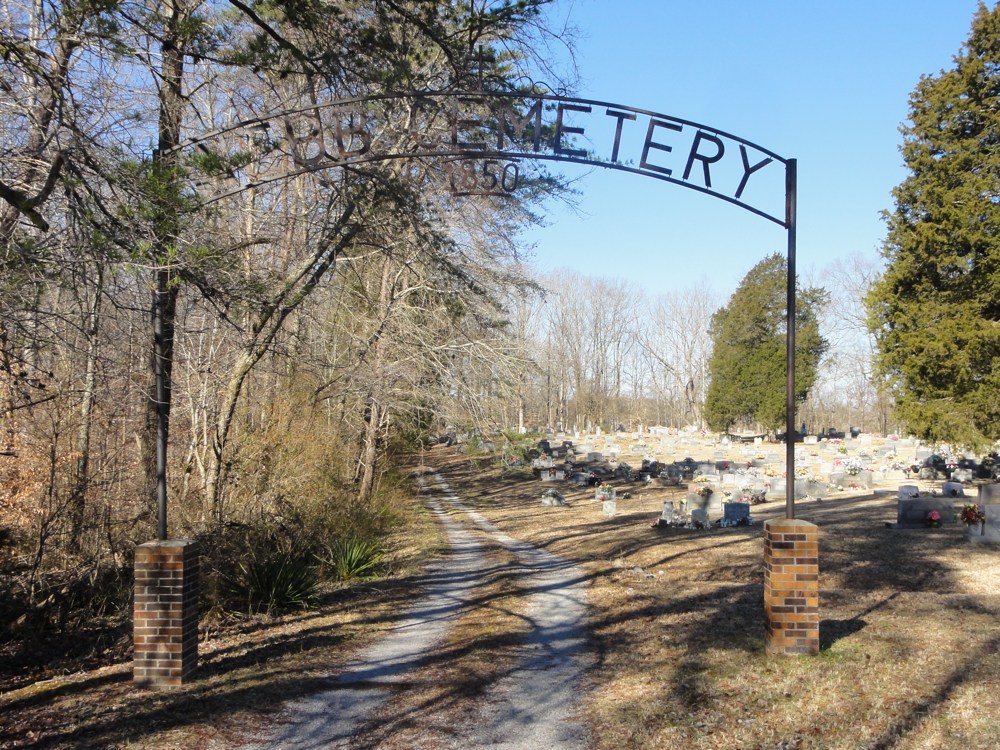 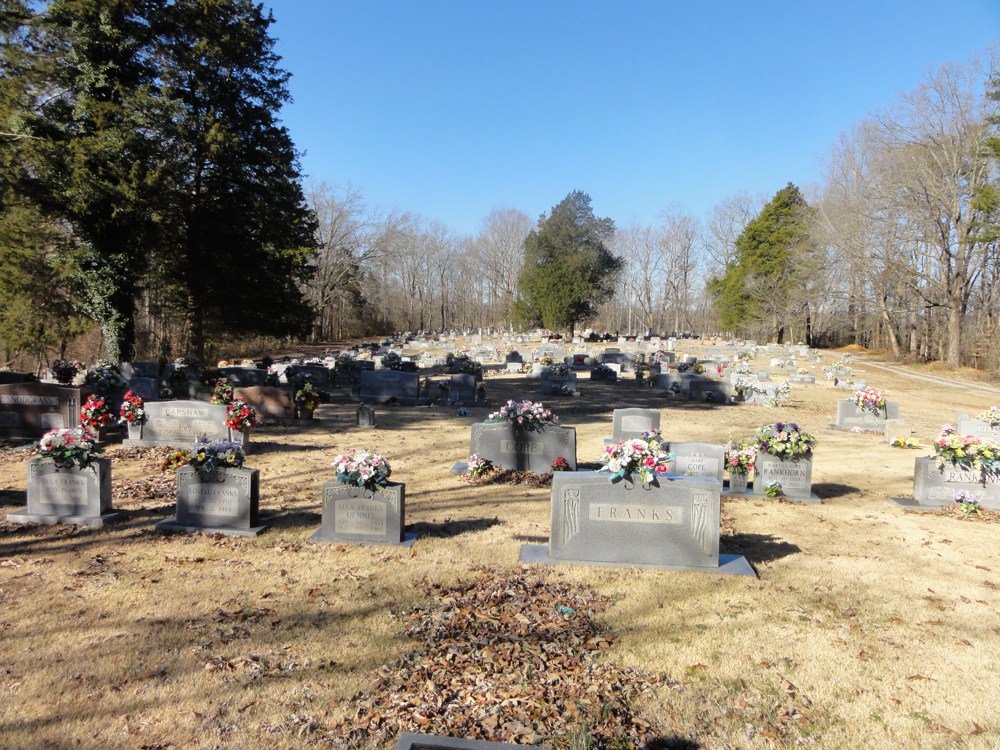 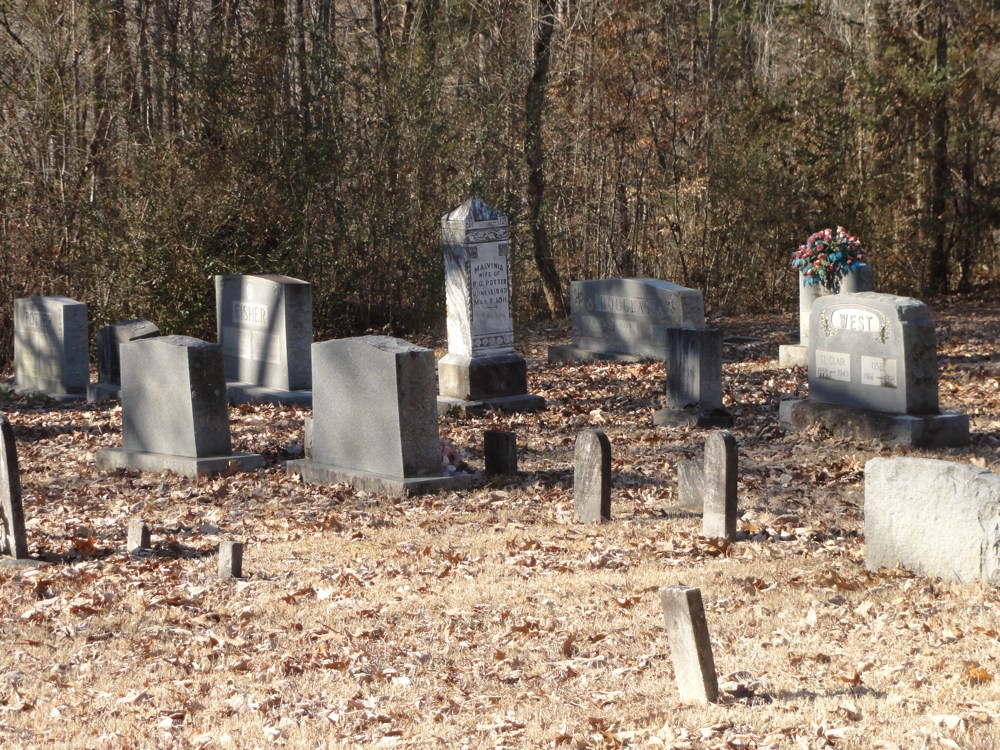 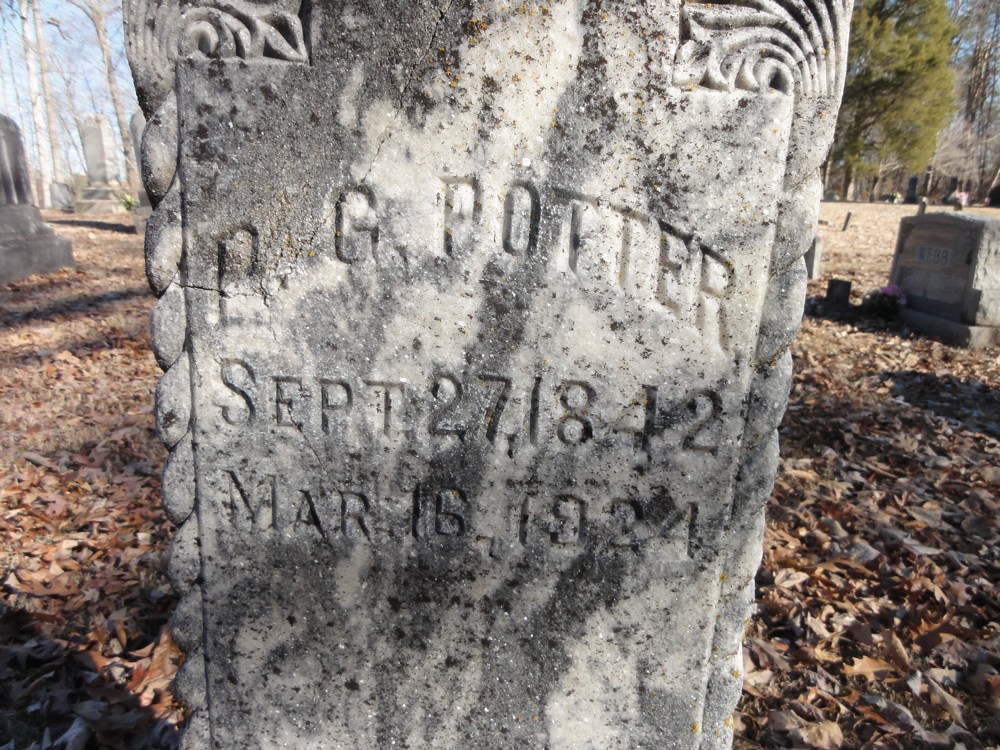 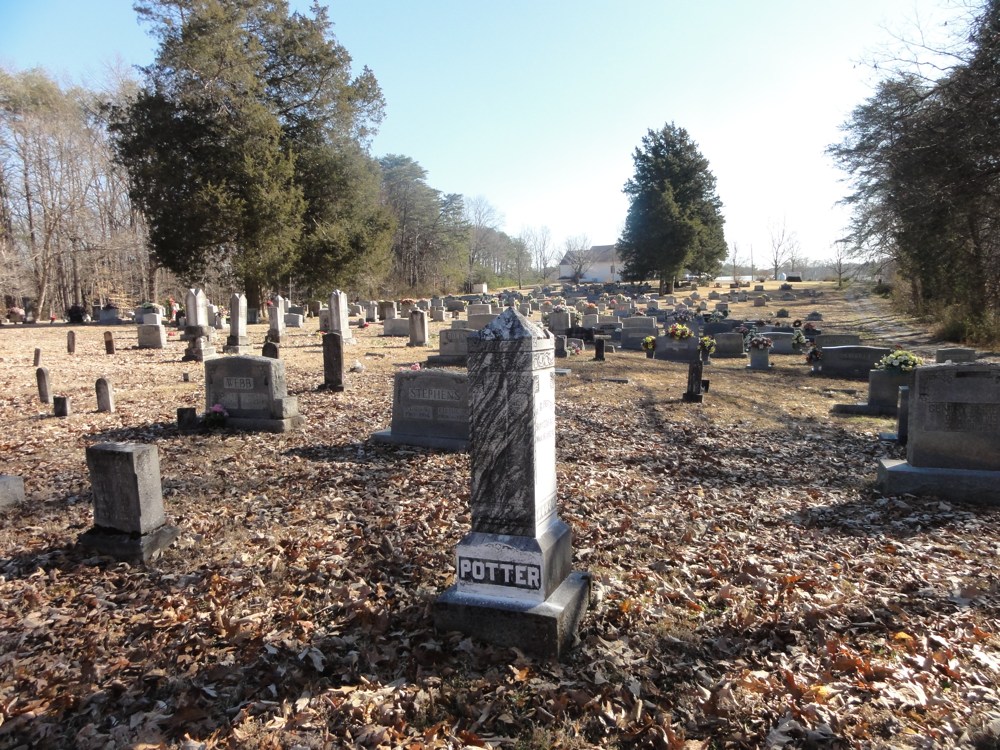 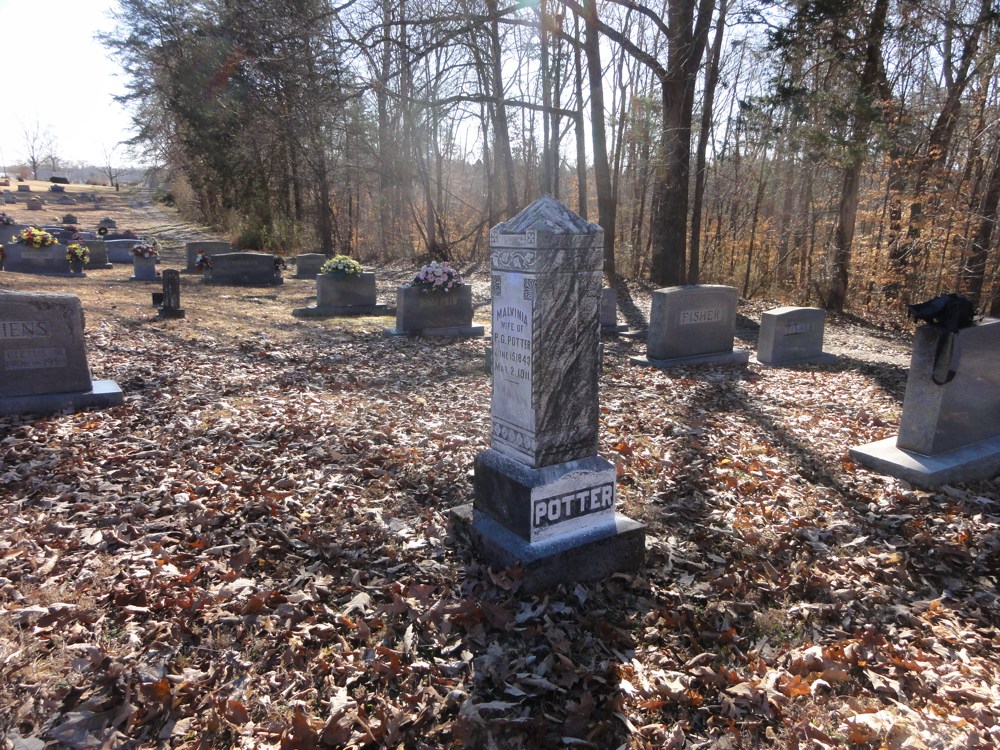 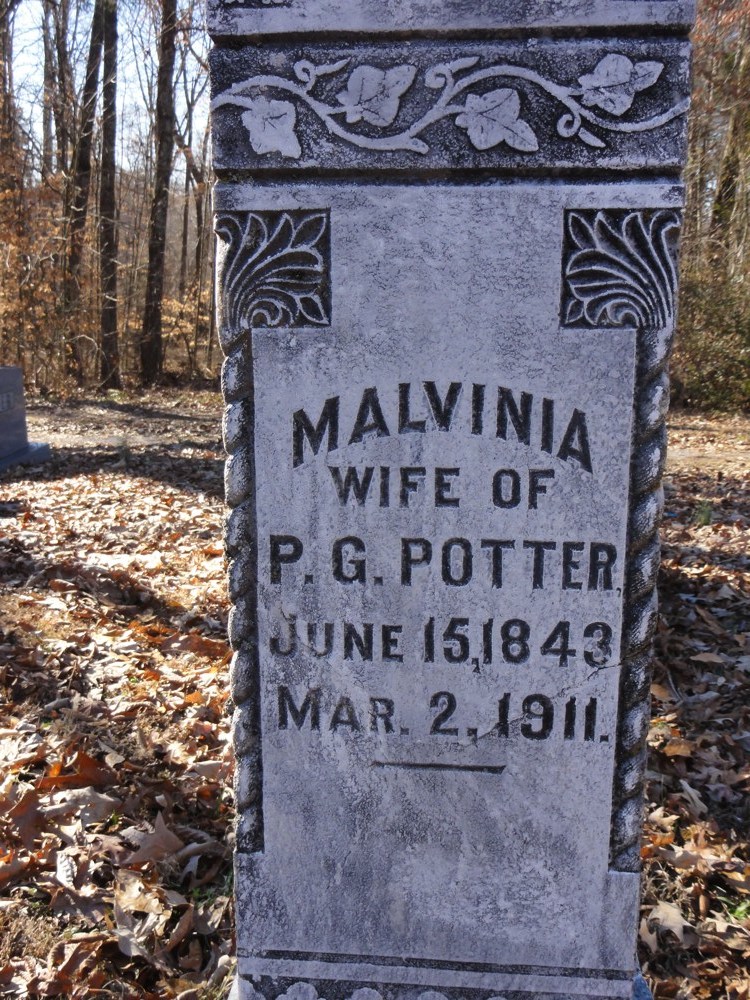 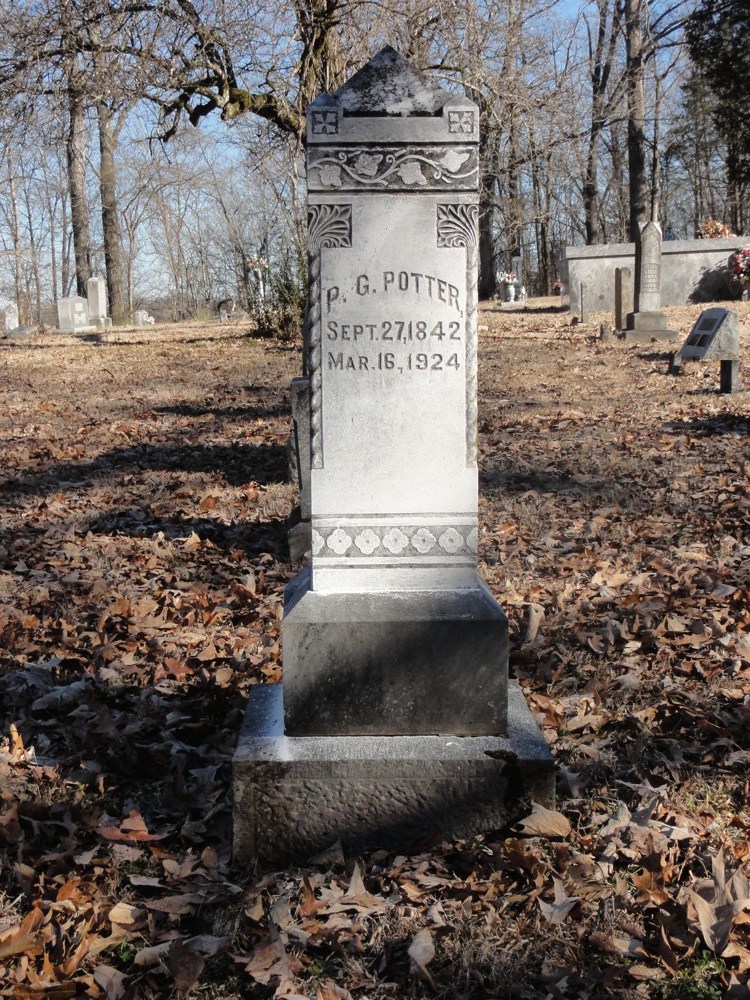 Photos Taken 02.24.2014
Website produced on 08.15.2014
Courtesy of Scott Harp
www.TheRestorationMovement.com
Special thanks to C. Wayne Kilpatrick for the assistance in procuring location and photos of the grave of P.G. Potter. Wayne traveled with me in late February, 2014 while making our way to Knoxville for a lectureship program.