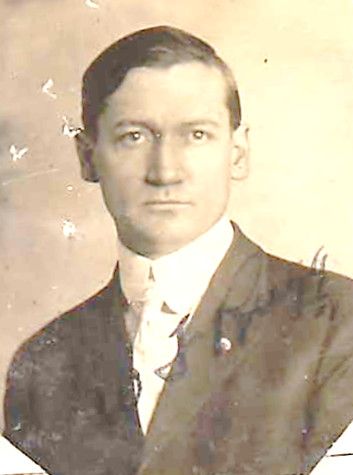 The Life of William F. Rugg

After his father died in 1914, the family moved to California. During World War I, he served in the diplomatic and consular service under President Wilson in South America.

After the war, William thrived. He attended at least two different colleges in the Los Angeles area, studying law. Passing the Bar exam, he became an attorney. Police work interested him, and he soon became a police officer in Los Angeles.

In December 1927, he was involved in a controversial departure from the police force. According to a news report, “The discharge  . . . was based on charges of violation of police regulations which forbid a policeman from accepting compensation from any other occupation." The young, educated officer, had become an “instructor in public speaking and dramatic art at a school for prospective motion picture actors.” (Modesto News Herald, 12.07.1927, p.1) See the full report below.

In a short time, William became known far and wide for his ability for public speaking, relating stories from his time as a police officer. His abilities to tell stories about police raids in L.A. and Hollywood mixed with the “gospel of Jesus” led him to be in high demand. He was known as the preaching policeman, often advertised in newspapers with photos of himself in a policeman’s uniform. Heading the National Alliance of Prisons Missions, he traveled all over the country to preach. Many denominations were packed full when advertising that William F. Rugg was coming to town. Sometime around May of 1837, he was invited to preach on his prison ministry at a Christian church in South Bend, Indiana. It is believed that this was his introduction to the Restoration Movement.

He continued to be associated with the Full Gospel / FourFold Gospel church (sometimes called Foursquare Church) for a time, but as he had the opportunities during the 1930s to preach for other Disciples churches, he became more and more interested in their approach.

During World War II, he entered the Army Air Corps, where he “ministered as a psycho-therapist to the prisoners in various of the Army’s disciplinary barracks.” (The Daily Reporter, Greenfield, Indiana, 06.14.150. p.1)

In the summer of 1950, it was announced that William F. Rugg was to become the “pastor” of the Little Sugar Creek Christian Church in Brandywine Township, Indiana. (Ibid. See the full article below). While in the region, Janet attended the University of Chicago where she finished her doctorate.

In 1955, Janet was invited to join the teaching staff of Milligan College near Johnson City, Tennessee. It seemed a good time for William to retire from full-time preaching work. The couple was in East Tennessee for only a couple of years, when on Friday, June 21, 1957, William was found dead in his bed. The coroner discerned that he had a heart attack in the night. A funeral followed on the campus of Milligan College, with President Dean Walker and Rev. Arthur Edwards presiding. Interment followed in the cemetery on the campus.

Janet continued teaching in the English Department until she retired in 1966. She moved to Elizabethton but continued to connect with Milligan and the Hopwood Christian church there. One report of her death explained that she was "an ordained minister and organist at Hopwood Christian Church." (The Knoxville News-Sentinal, 11.09.1971, p.4), She passed away on Sunday, November 7, 1971, and was buried next to her husband in the Milligan Cemetery. 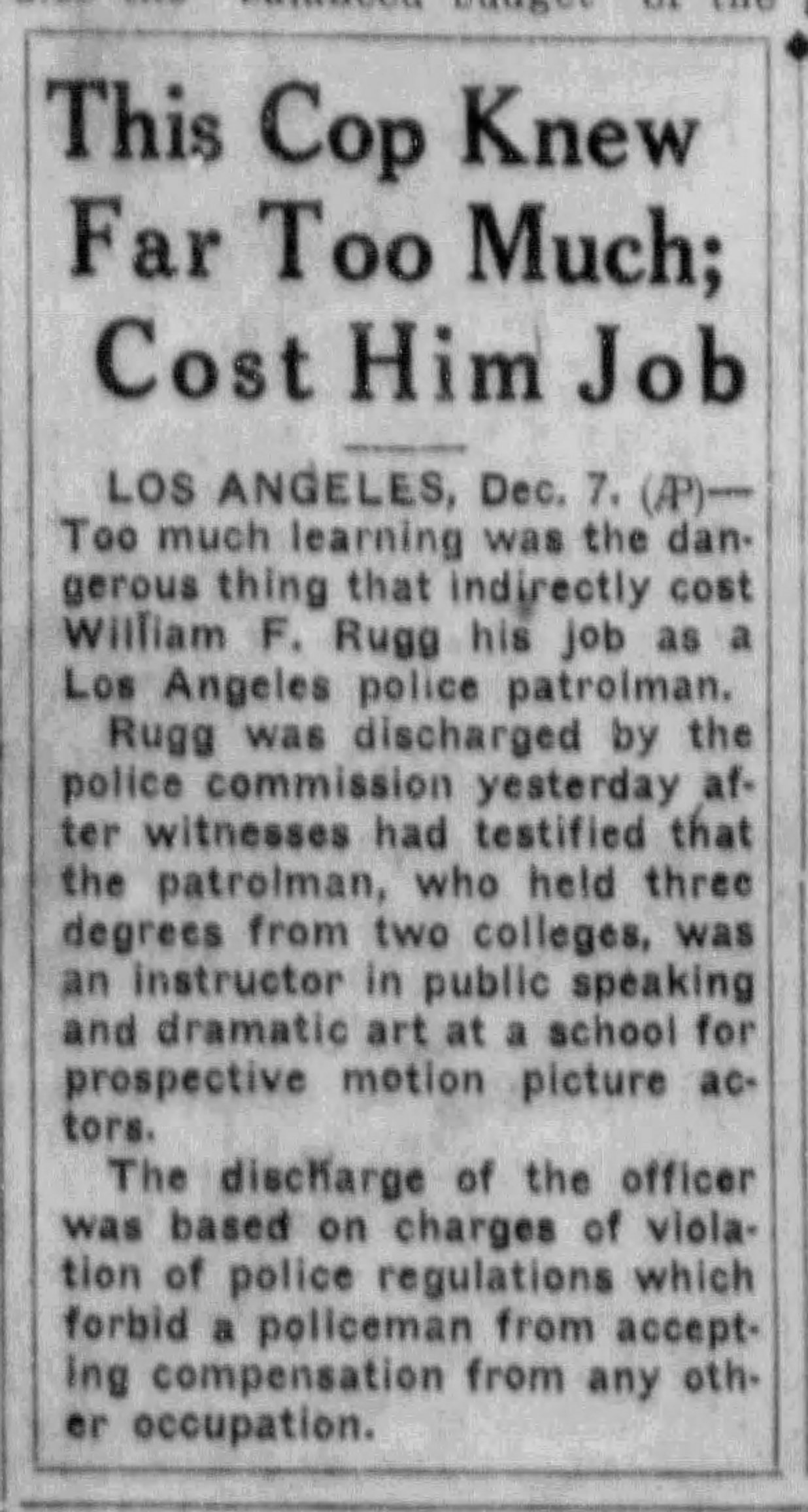 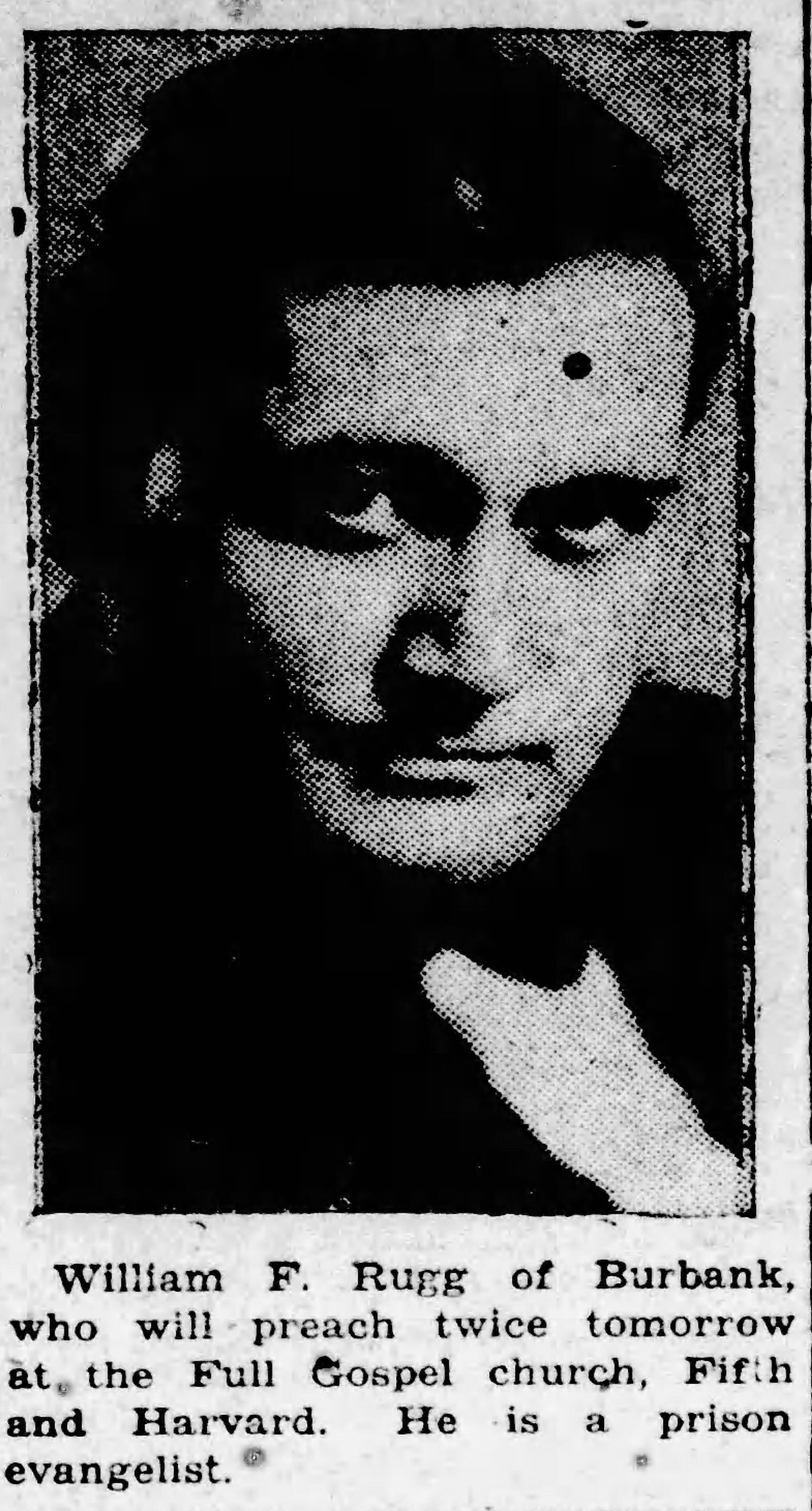 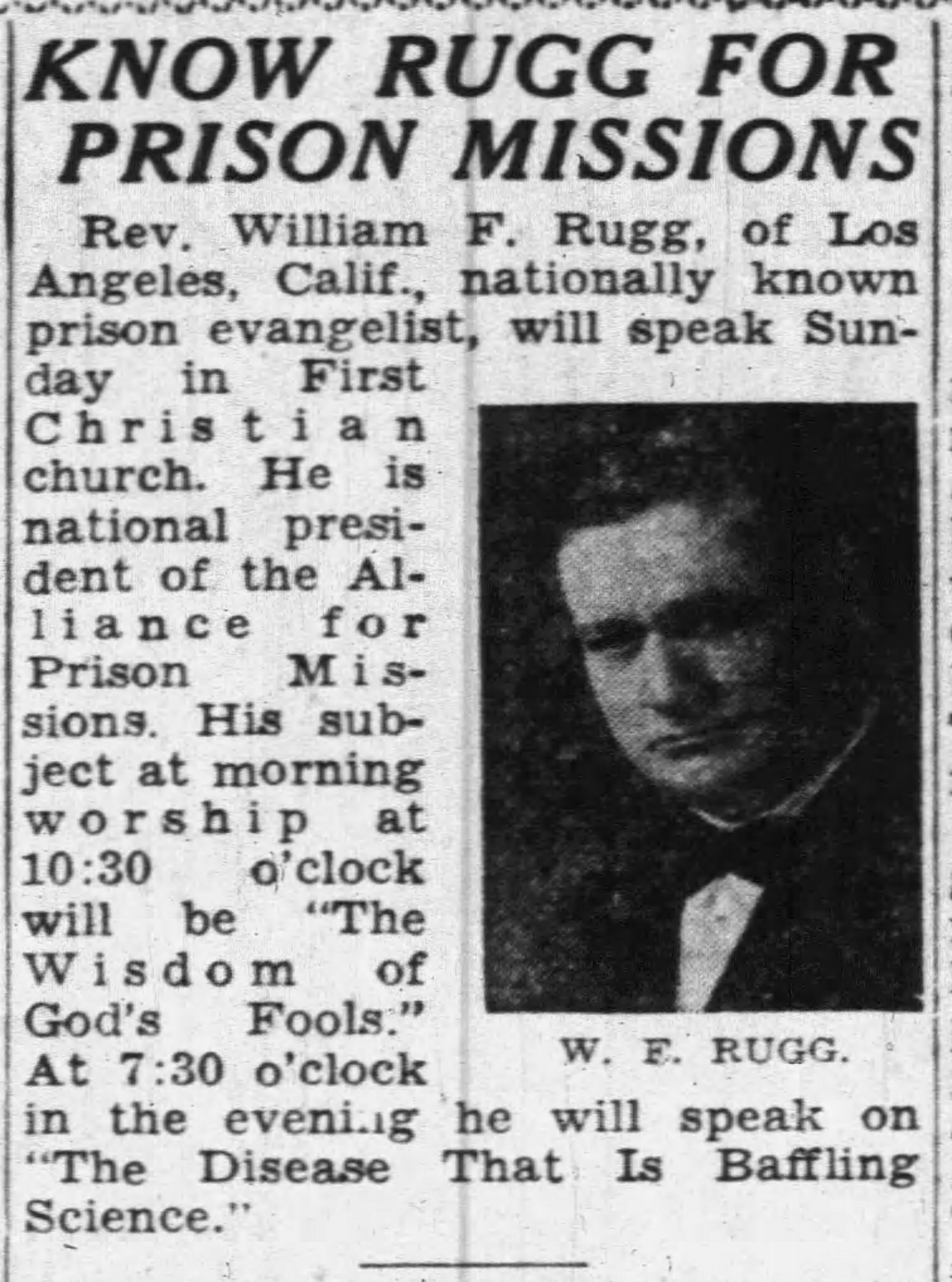 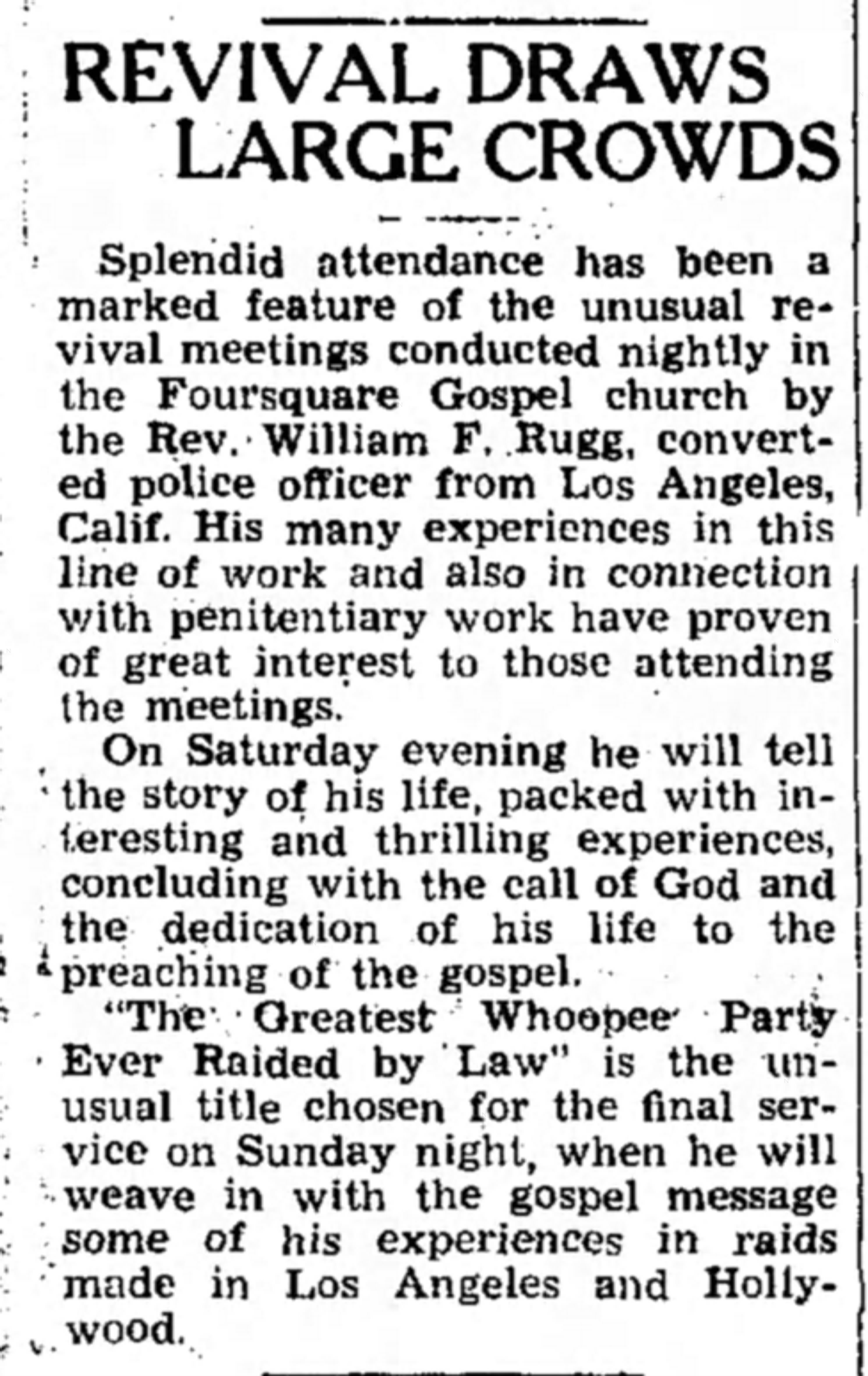 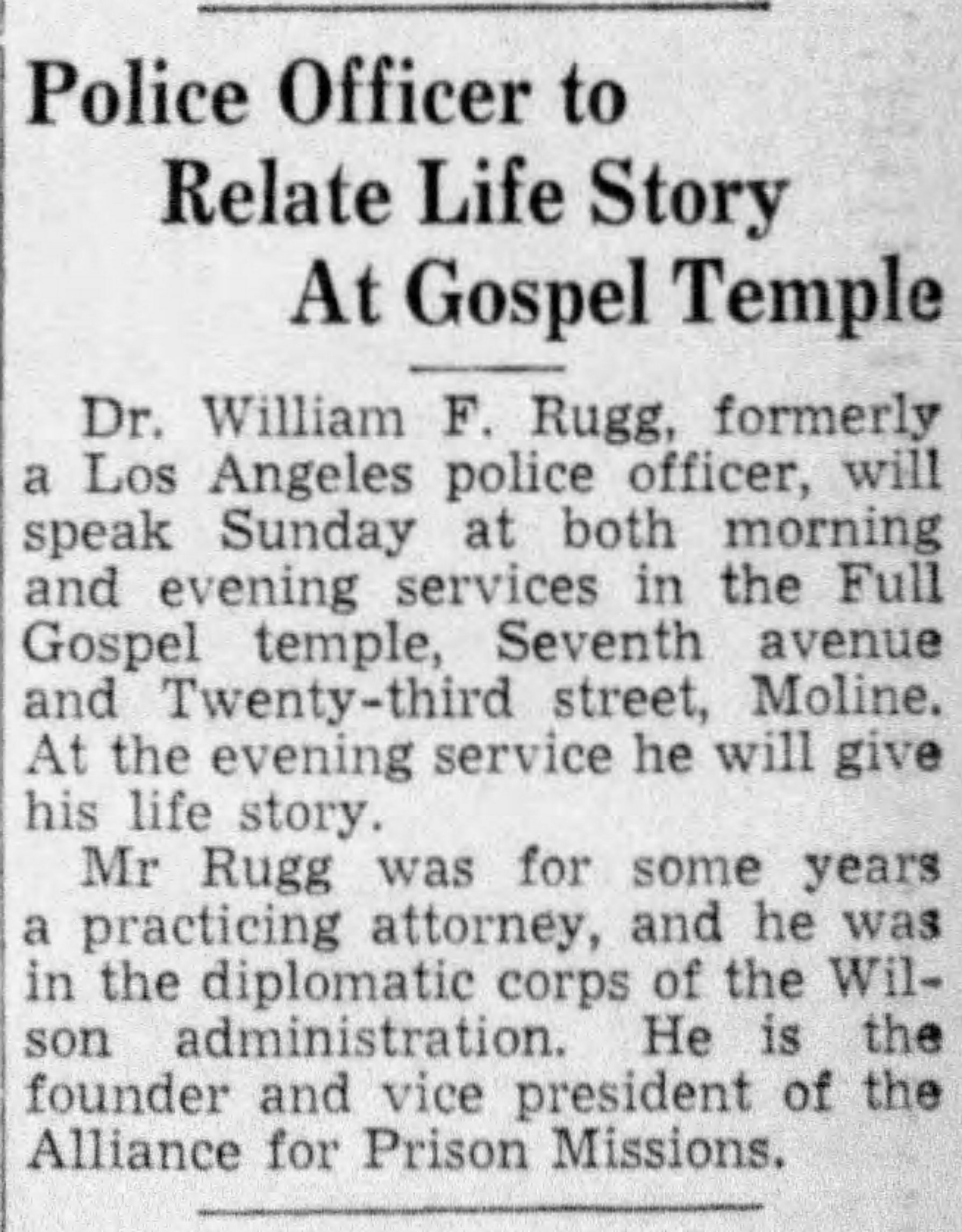 Notice of Marriage of Gates Rugg and wife by R. Anderson Jardine 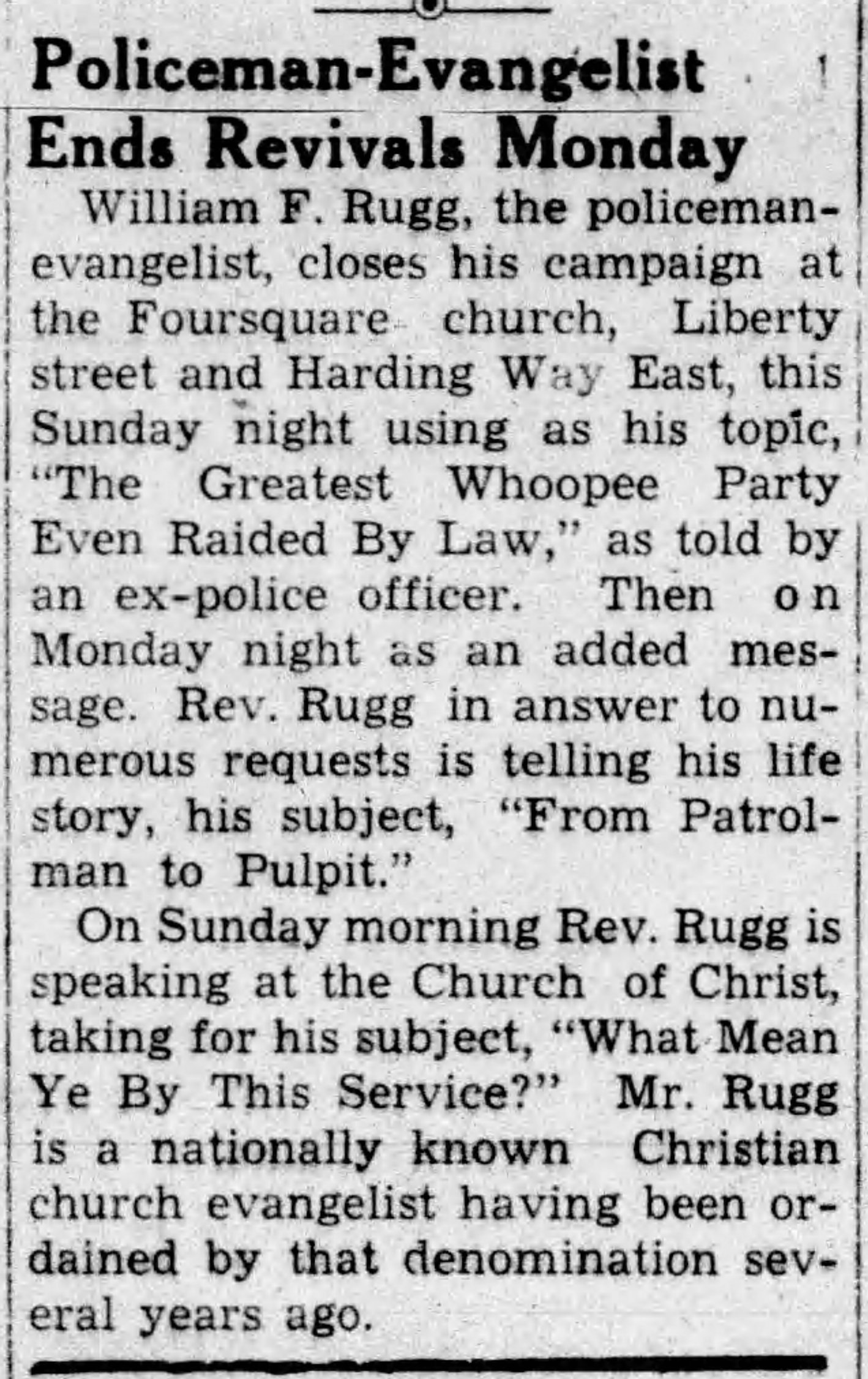 R. Anderson Jardine, A Friend Of William And Janet Rugg 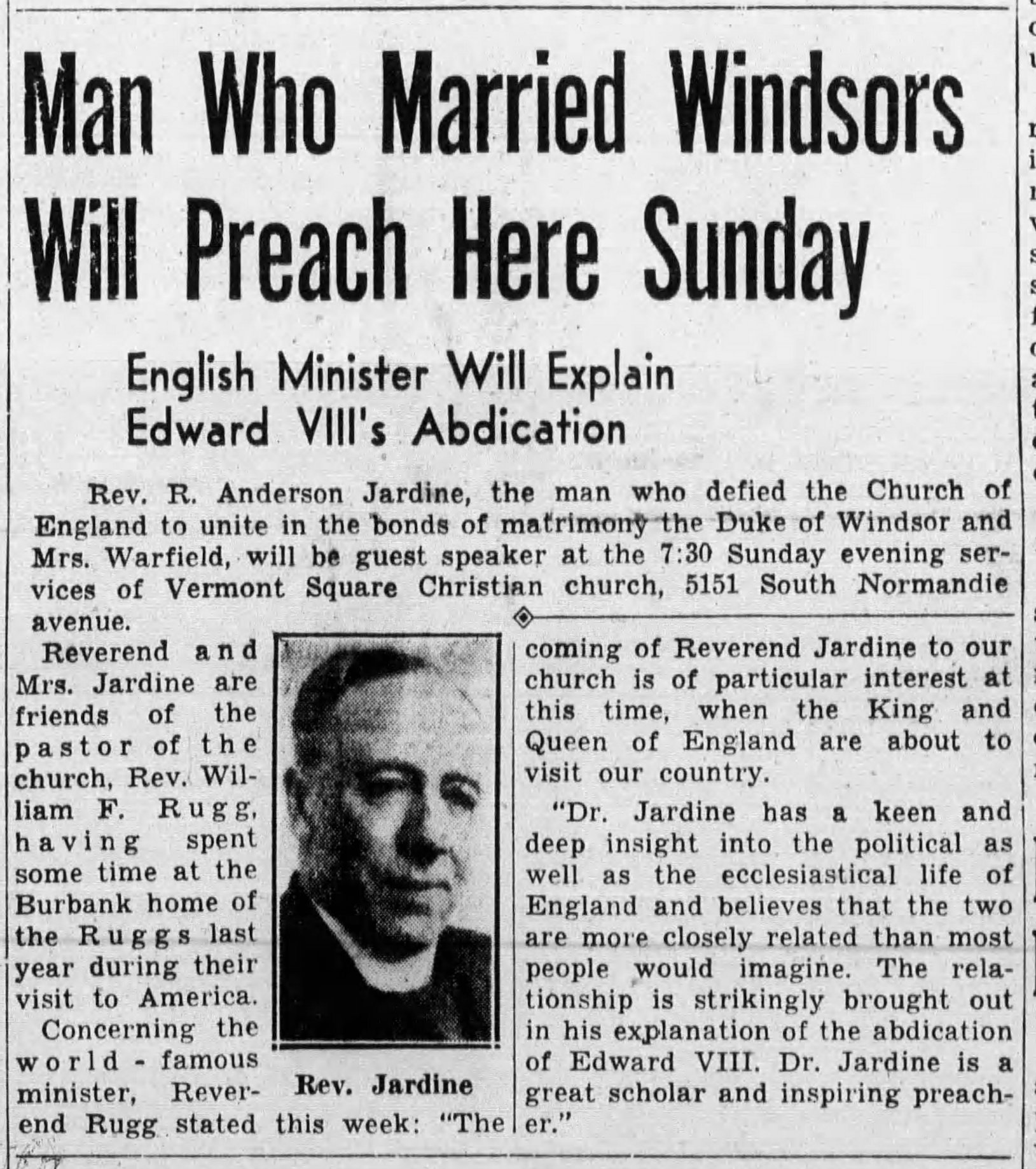 Notice of the Passing of W. F. Rugg 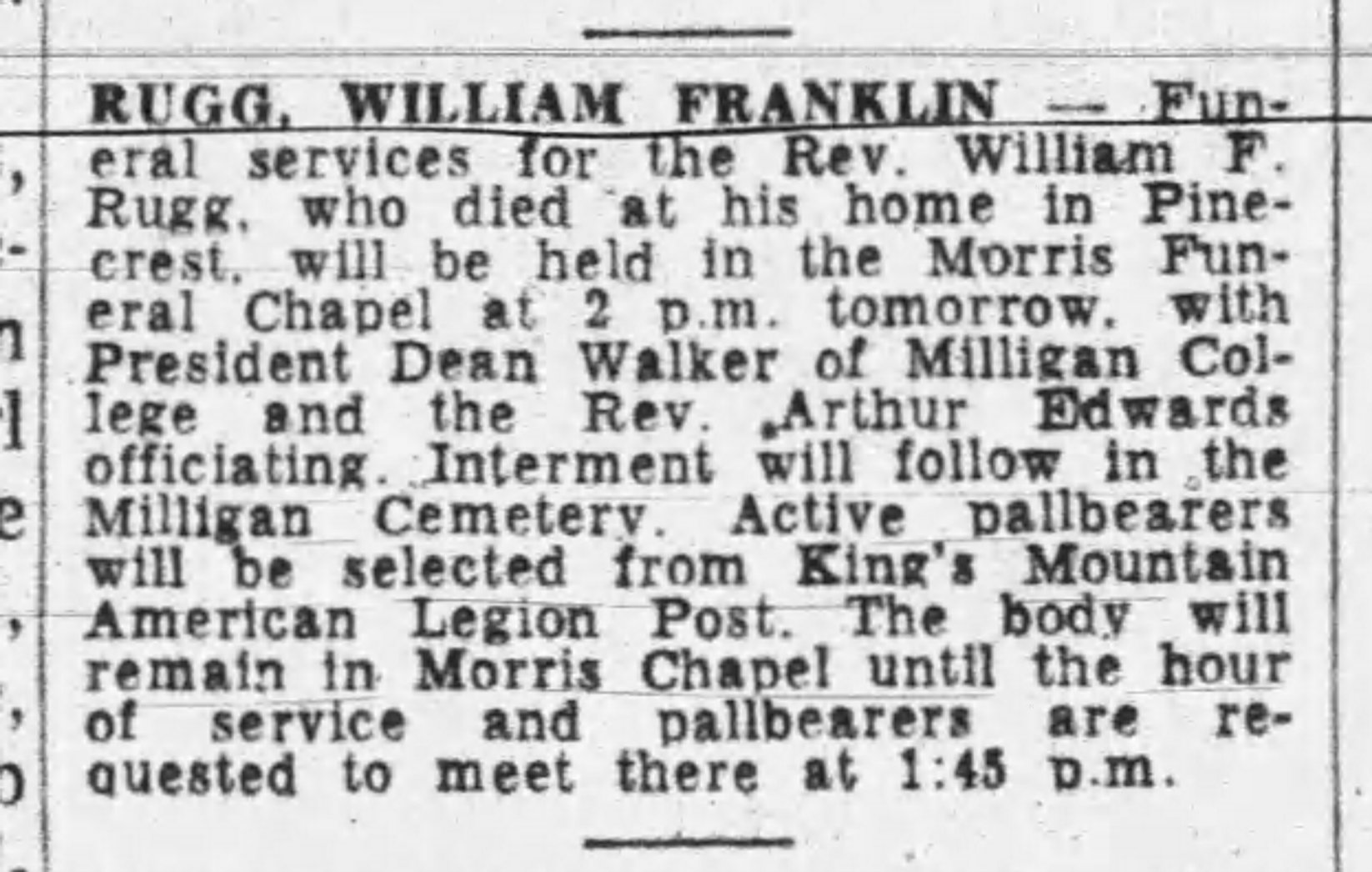 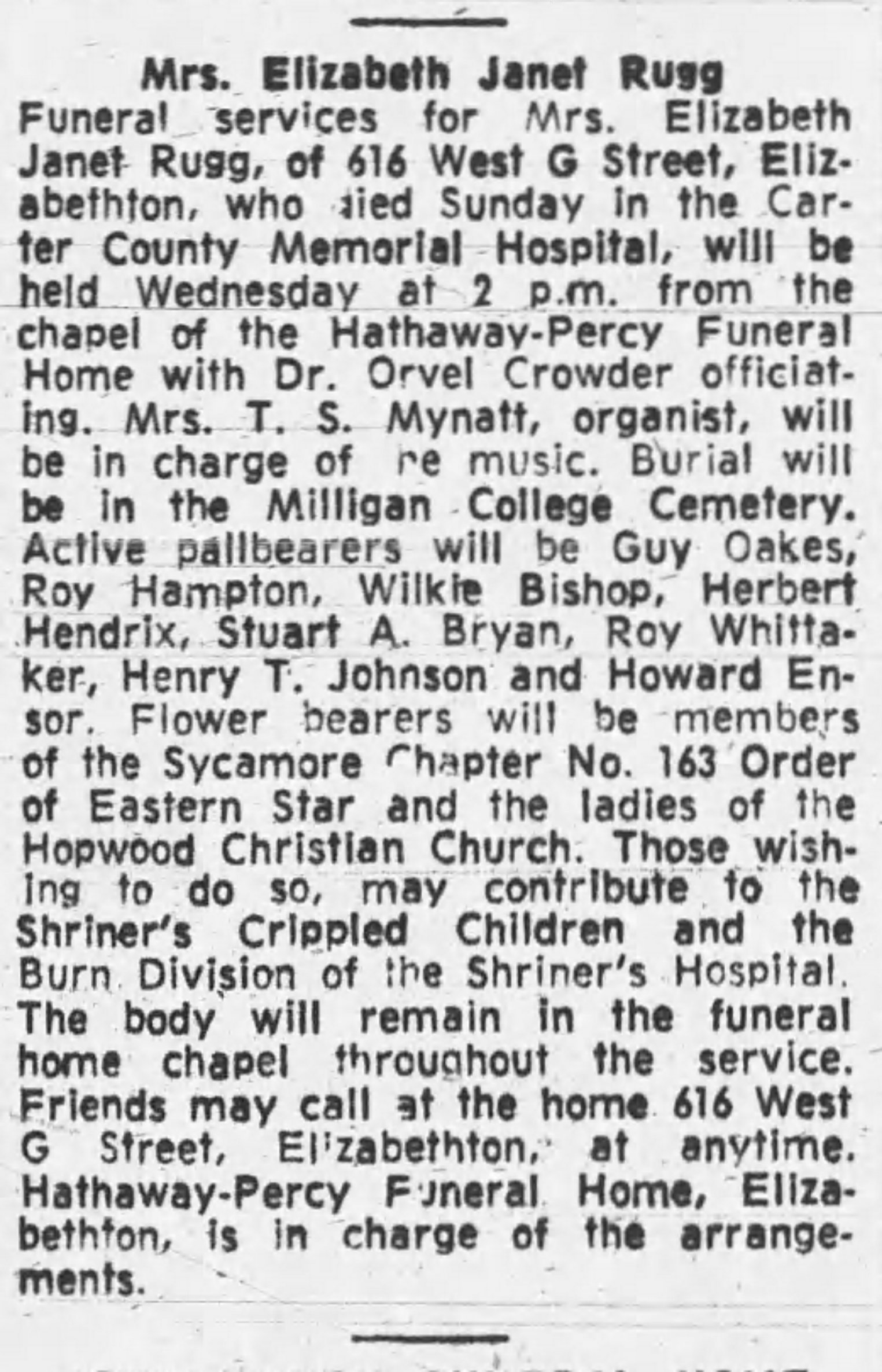 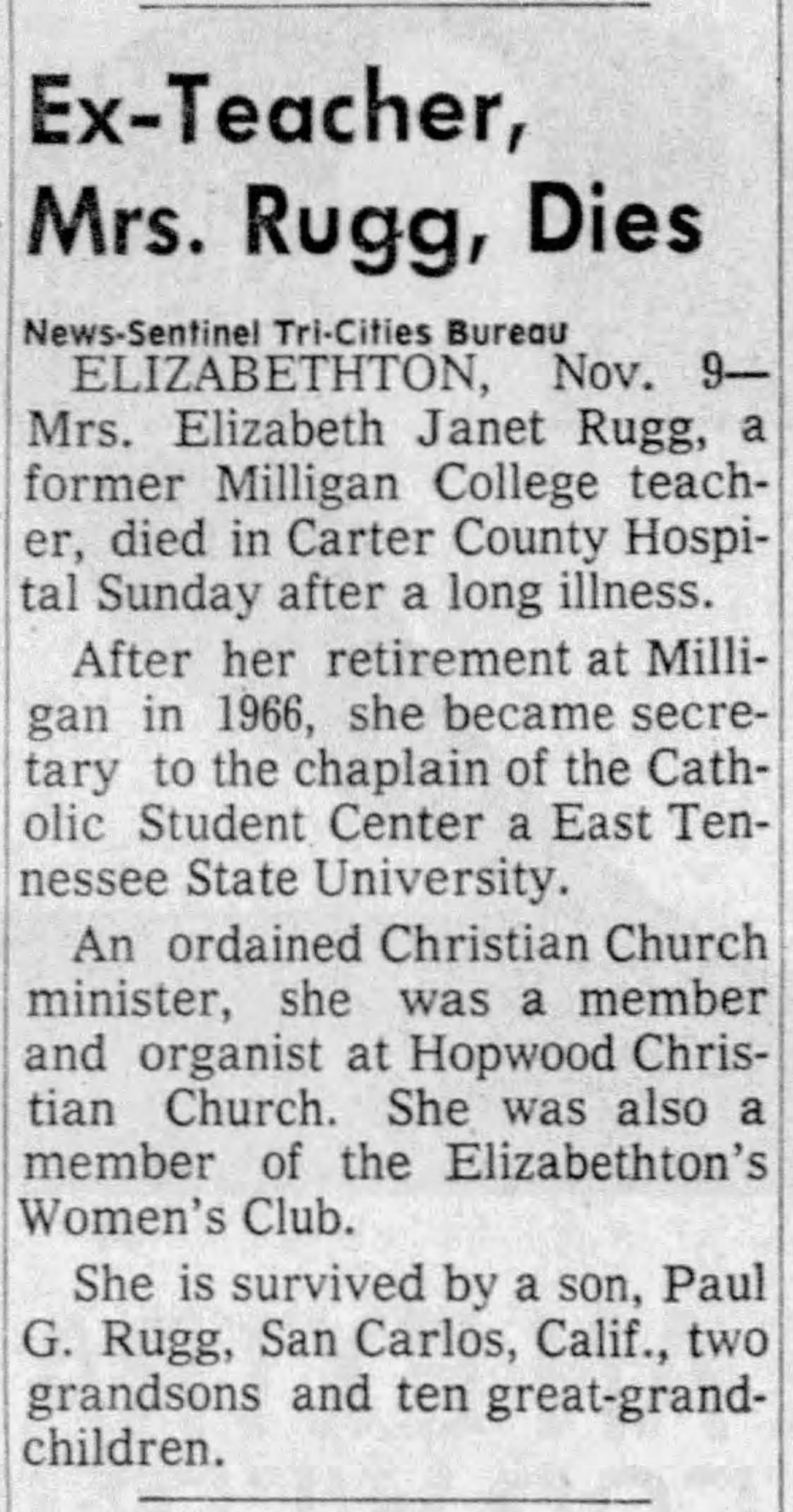 The Rev. Willlam F. Rugg, 67, well known evangelists, of the Christian Church, died at his home in Pinecrest, early Friday morning, after a long illness.

He served in the evangelistic field for a number of years and was well known throughout his church. He also served two pastorates in California, and was pastor of the Garfield Park Christian Church in Indianapolis, Ind. Prior to entering the ministry he was an actor as well as a director in the motion picture industry.

He served in World War I in Naval Aviation, and was a civilian employee of the government. during World War IL.

He was a native of Nebraska, and lived in California for a number of years. He has been a resident of this area for the past two years.

Surviving are his wife, Mrs. Janet Rugg, of the home, who is a member of the faculty of Milligan College, one son, Paul, Burbank, Callf., two brothers: George W Rugg, Glendale, Call., and Bryon Rugg, Anaheim, Calif He is also survived by three grandchildren.

The Morris Funeral Home is in charge of arrangements. 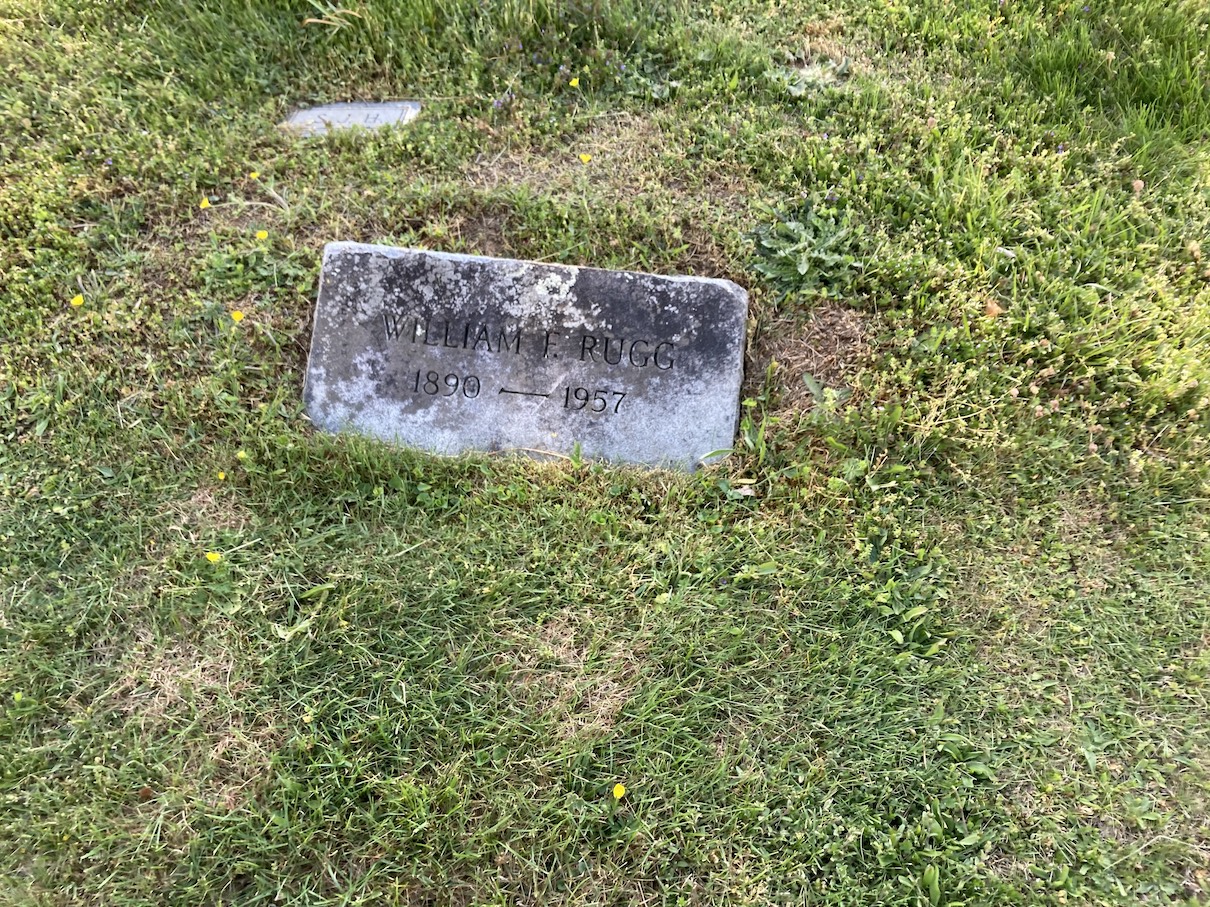 Special Recognition: C. Wayne Kilpatrick and Tom Childers traveled with your webeditor to East Tennessee to locate the final resting place of A. A. Ferguson. Many thanks to all. Some of the photos on this page were taken by Tom. Also, I should thank a kind lady whose name I can not recall who was visiting the cemetery the day we were there. She was most friendly and most helpful. She had grown up around the college and had been connected with someone in its faculty. When we arrived, we were only looking for the graves of Samuel Shelburne and A. A. Ferguson. When we told her what we were doing, she proceeded to show us a few other graves of special people in the cemetery. One was that of William F. Rugg and others—former presidents, teachers and dignitaries of Milligan College. So, many, many thanks to that kind lady.