The Life and Work Of Lewis Yeagley

Brother Yeagley was a graduate of Nashville Bible School in 1899. In 1905, he planted a congregation of the church of Christ at Flat Rock in Wilson County, Tennessee.

In 1926, he was supported by the Belmont church of Christ in Nashville as a missionary to Johnson City, Tennessee. Over the years of his ministry, he preached among churches of Christ in Michigan, North Carolina, Arkansas, and Tennessee. He conducted hundreds of gospel meetings, presided over many wedding and many more funerals.

After 30 years of working in the south, in September 1935, the Yeagley family moved to Detroit, Michigan to work with the East Jefferson church of Christ. Within two years there were 135 additions to the work. After four years with the Detroit congregation, the Yeagley family moved to take the work in Pontiac, Michigan, September 1939. In 1941, it was reported to the Gospel Advocate concerning brother Yeagley's work at Pontiac, "He is seventy years old, but is very active and enthusiastic. He walks from three to six miles a day, visiting the sick, making new contacts, and giving encouragement. There have been some twenty-one baptisms and ten restorations this year, which speaks well for such a hard place as Pontiac." (Will W. Slater, GA, 11.20.1941,p1123.) The following year, the family moved to work with the church of Christ in Ann Arbor, Michigan.

In 1943, Lottie succumbed to a battle she had with cancer for several years. Her body was laid to rest next to that of her son, Roy, back down in Nashville. Brother Yeagley continued working with the church as long as possible. He moved to Romeo, Michigan, where it became necessary to move into a nursing home for continued care.

In 1962, Otis Gatewood sent a note into the Gospel Advocate saying, "Brother Yeagley is eighty-nine years old and has been preaching sixty-two years. He has baptized about 3,500 people in his life-time. He obeyed the gospel when he was fifteen years old. He averaged holding twelve meetings yearly. He never received much for his preaching. He said, 'I preached wherever I could get people to listen––in schools, under brush arbors or in homes.' He attended the old Nashville Bible School the second year of its operation. He entered school there because he learned of the school through the Gospel Advocate. His birthday is January 10." (Otis Gatewood, GA, May 18, 1961, page 318)

Brother Yeagley passed away on October 28, 1965 in Romeo, Michigan. The body was brought back to Nashville, where interment took place in Mount Olivet Cemetery. 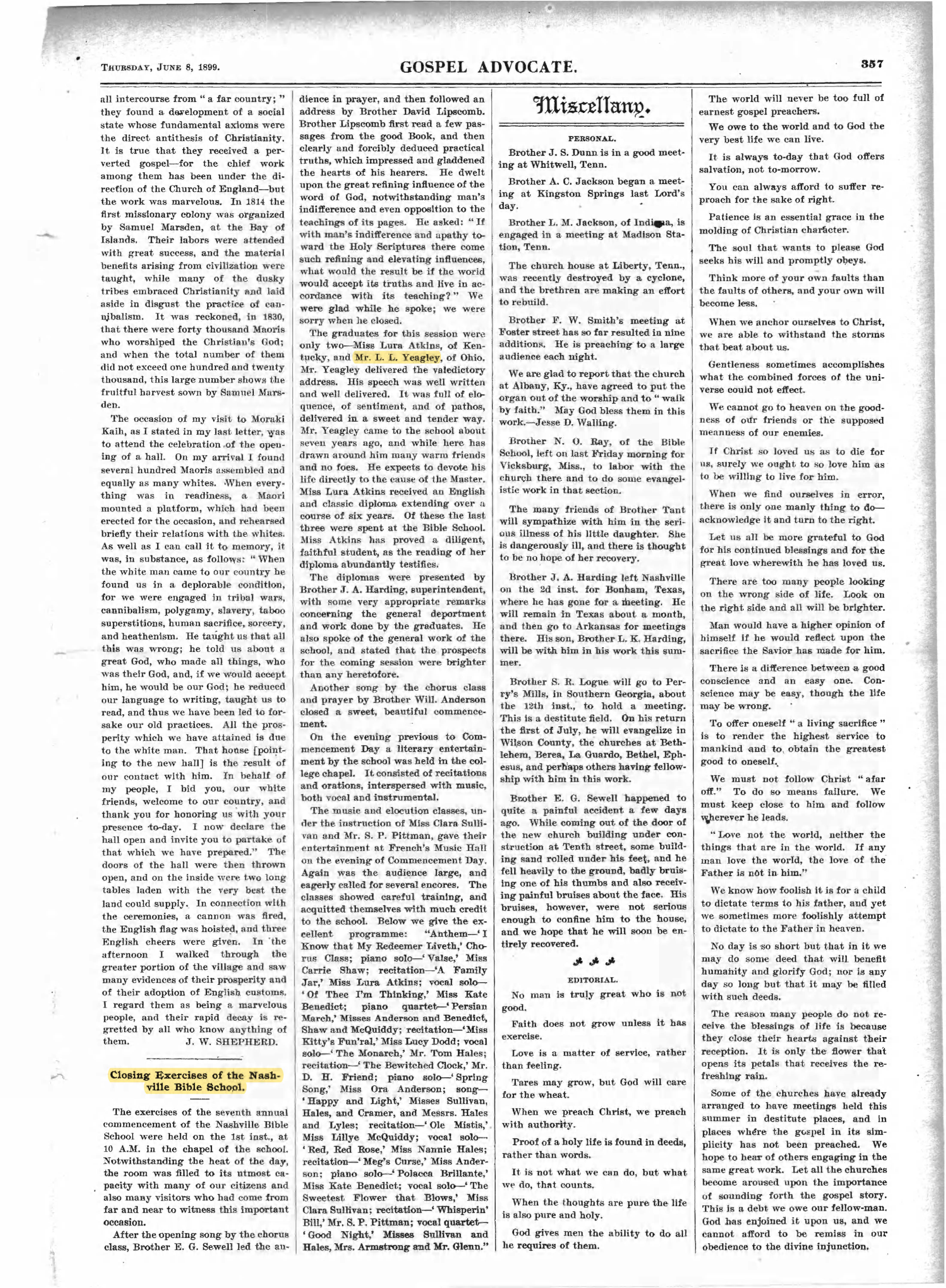 Letter written to Emma Larimore at the Gospel Advocate 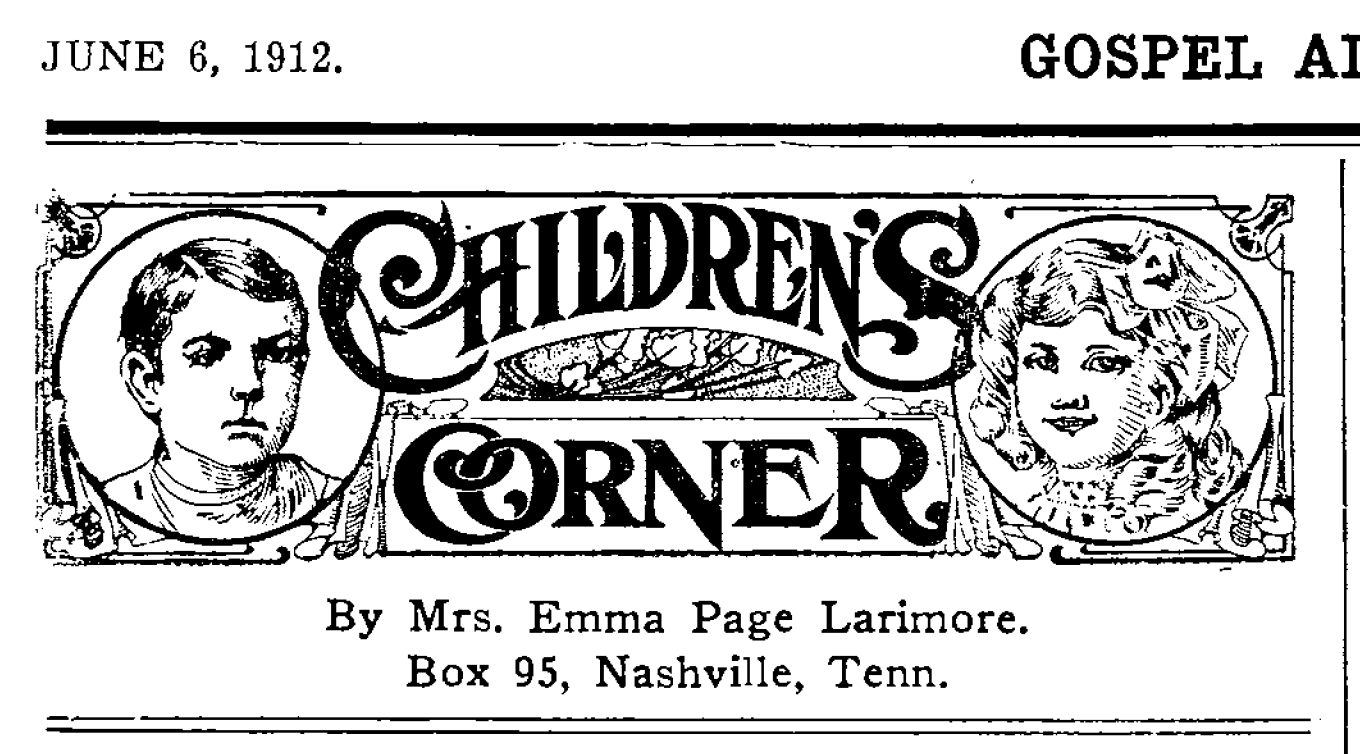 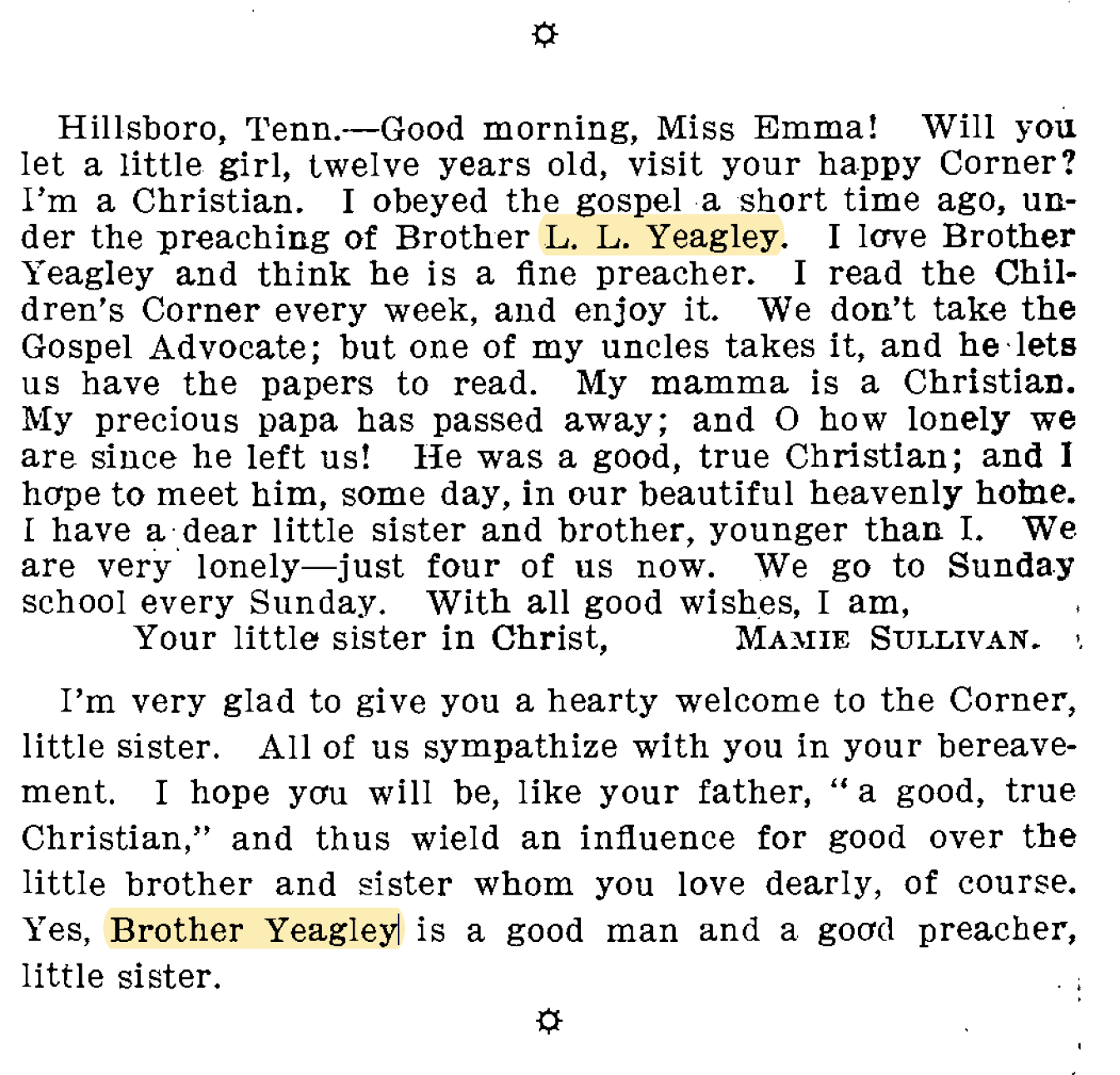 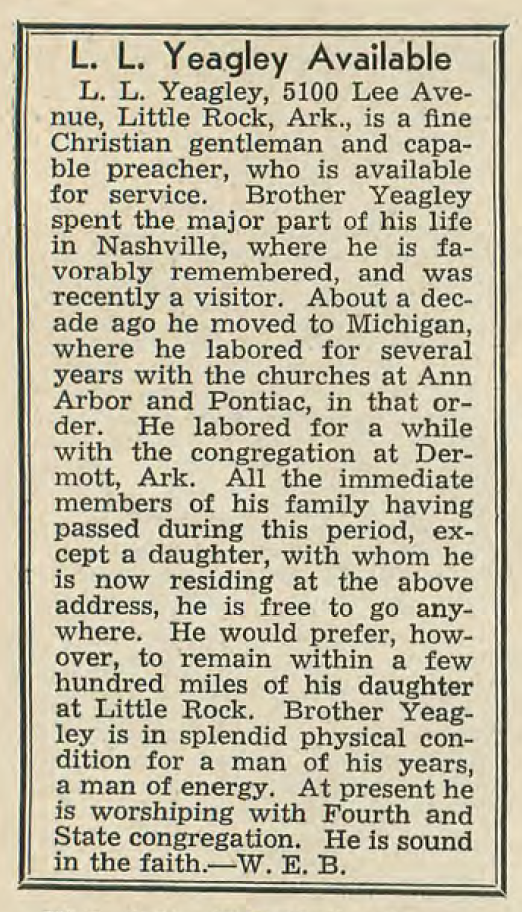 1937 Advertisment For East Jefferson
Church Of Christ In Detroit, Michigan 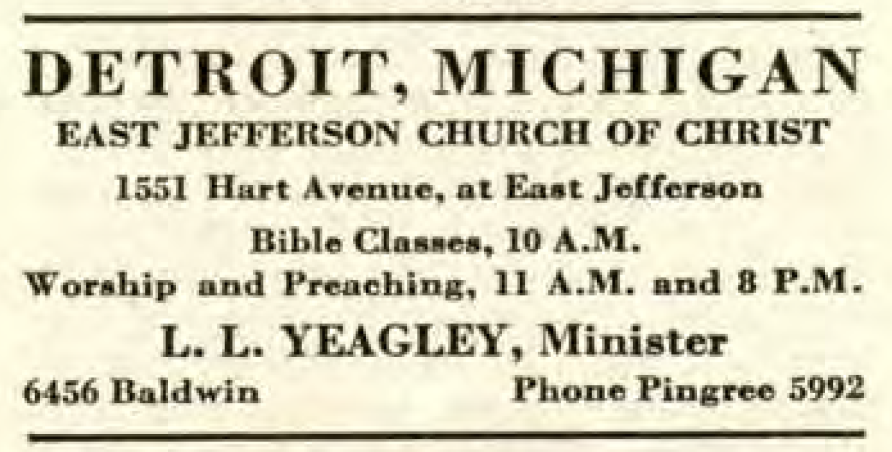 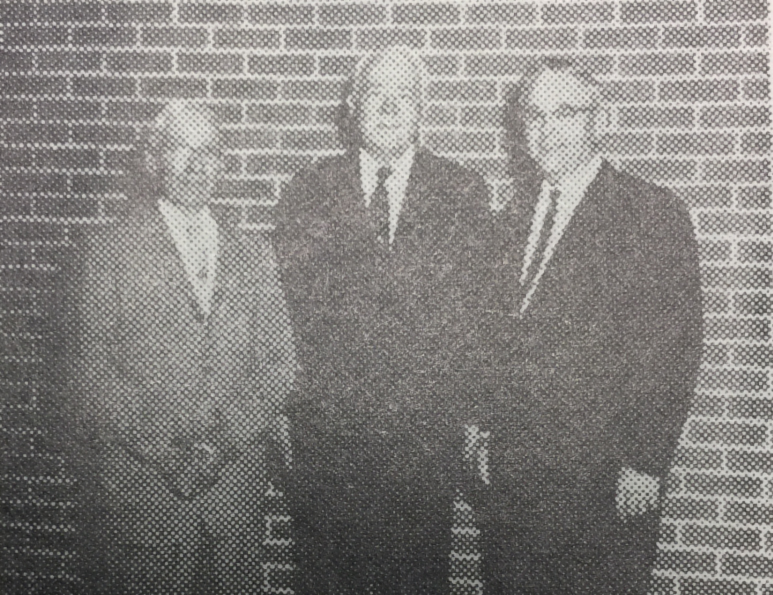 Lewis and Lottie Yeagley are buried in the Mt. OIivet Cemetery in Nashville, Tennessee.

From I-24 W - In Nashville Take Decatur Street Exit. At dead end, turn right on Hermitage Ave. Continue until you pass Calvary Cemetery on right. The next cemetery will be Mt. Olivet. Enter main entrance. Turn left as if going toward the funeral home. However, continue past funeral home to the end of the road and turn right. You will come to a fork. Go to the right. Then make a left and head straight heading up the hill. Near the top of the section look to your right for a park bench with the word HARALSON on it. They Yeakley plot is just the other side. See photos below, or GPS for actual location. Section 16, Lot 210

From I-24 E - In Nashville take Fessler's Lane Exit and turn left. At dead end, turn right on Hermitage Ave. Continue until you pass Calvary Cemetery on right. The next cemetery will be Mt. Olivet. Enter main entrance. Turn left as if going toward the funeral home. However, continue past funeral home to the end of the road and turn right. You will come to a fork. Go to the right. Then make a left and head straight heading up the hill. Near the top of the section look to your right for a park bench with the word HARALSON on it. They Yeakley plot is just the other side. See photos below, or GPS for actual location. Section 16, Lot 210 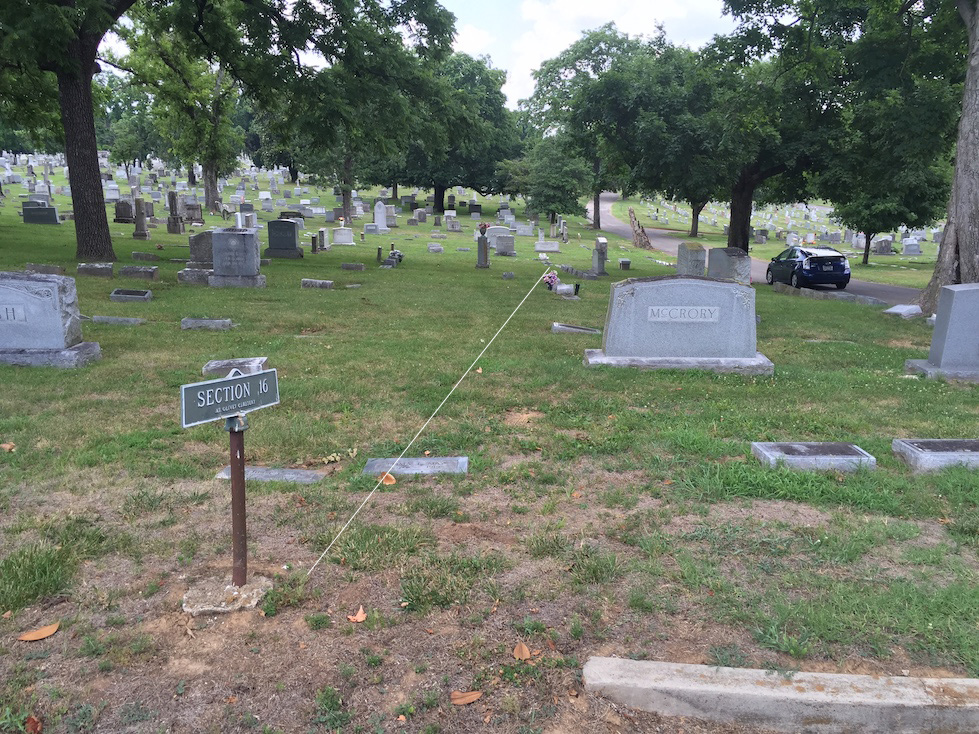 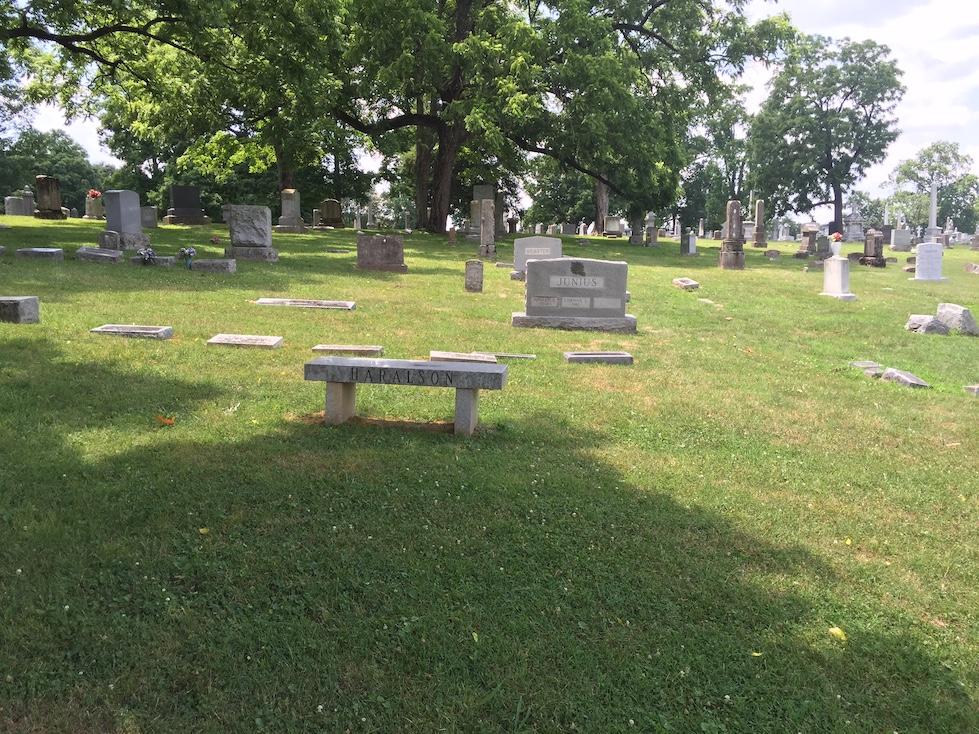 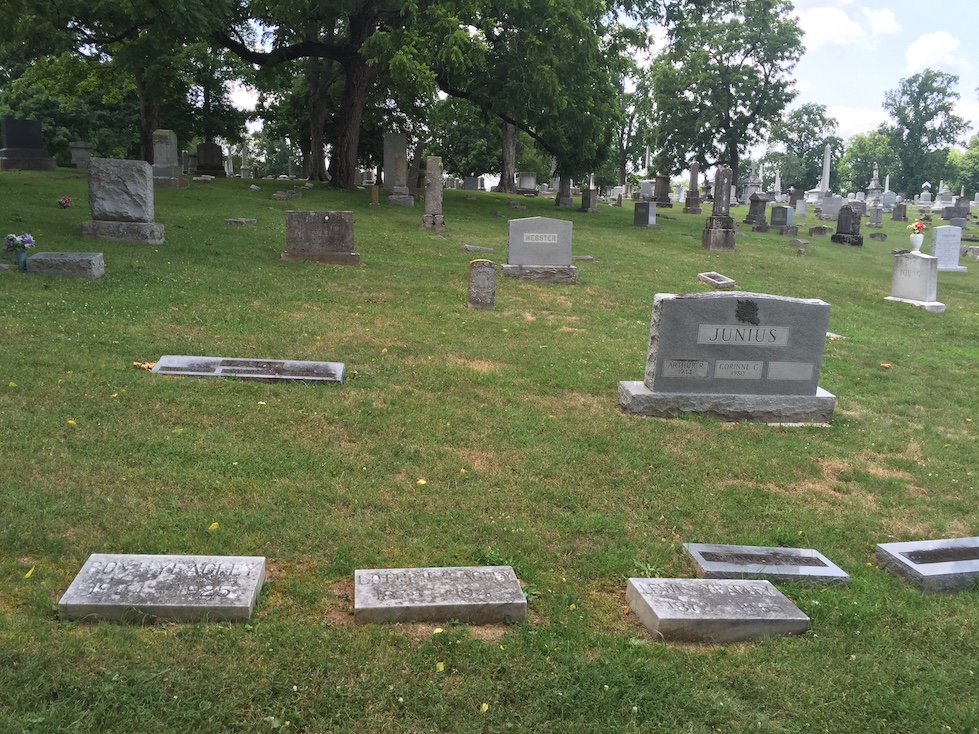 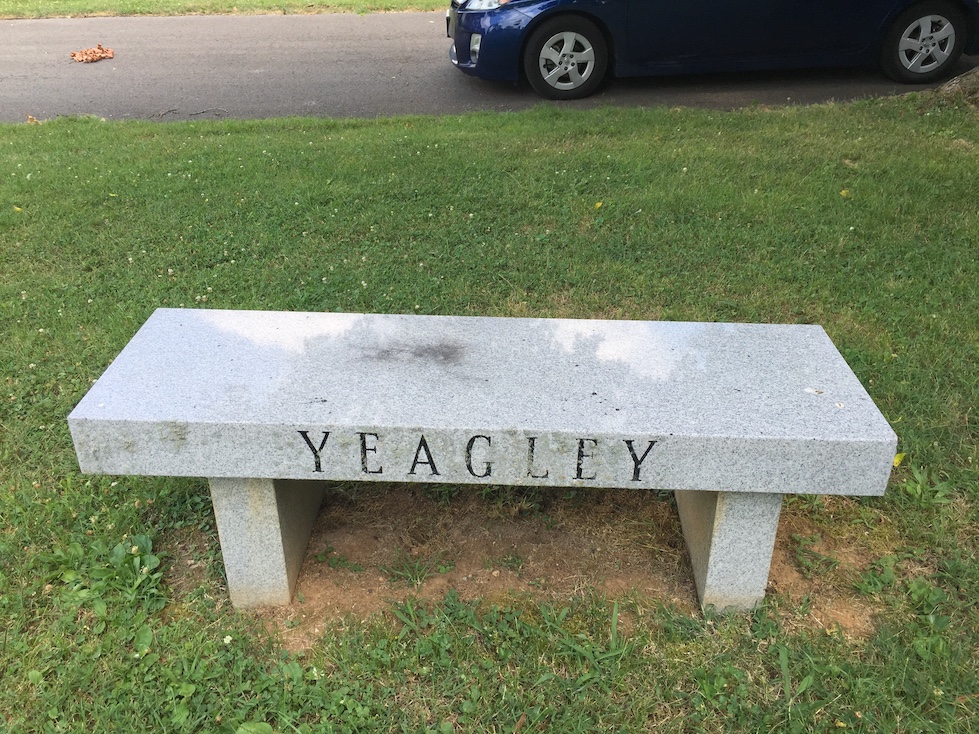 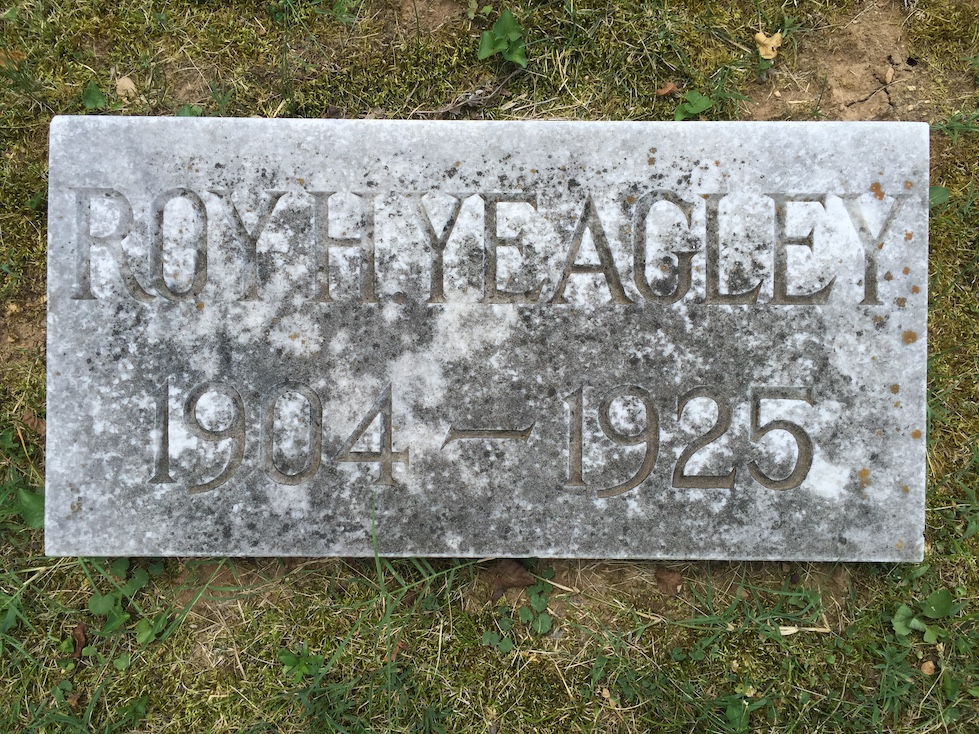 In this age of industrial progress and scientific discovery man is prone to rely on self and to forget God. Especially is this true of the young. What are the causes of this lack of interest in things spiritual?

"Like father, like son," is an adage that is daily pictured. For what are our efforts expended? In what channels do our thoughts run?' To answer this truly, we are forced to admit that selfish interests and material wealth predominate in our life. How much of our time is devoted to the developing and perfecting of the inner man? Our children, following us, and in most cases encouraged by us, are studying and fitting themselves for those trades and professions that yield the greatest money return. The best remedy for this state of affairs is a reformation in ourselves and a greater zeal on the part of parents for the worship of Jehovah.

David said in the Psalms: "Let them praise the name of the Lord: . .  . both young men, and maidens; old men, and children." Also, he said: "Wherewithal shall a young man cleanse his way? by taking heed thereto according to thy word." Solomon said: "Remember now thy Creator in the days of thy youth." The ideal young man in God's sight makes those words his daily thoughts and plans his acts accordingly. Such a young man is now rare, and the passing of one is the cause of this article.

Roy Haralson Yeagley was born on February 28, 1904; obeyed the gospel at the age of twelve; was married, on December 31, 1923, to Mizella Burton; and died on February 11, 1925, lacking a few days of being twenty-one years old. Fortunately, the success of life is not measured by its length, but by service. Roy's was a life of service to God and to man. He received his school training at David Lipscomb College, and at the time of his death he was a valued and trusted employee of the Orr Grocery Company. He was regular in his attendance at Sunday school, the Lord's day worship, and prayer meeting. He used his talent by leading the song service at the Foster Street congregation, and later at the Waverly-Belmont congregation.

His parents, Brother and Sister L. L, Yeagley; his sister, Elizabeth; and his wife, Mizella, have the sympathy of hundreds of Roy's friends. They have also the consolation that, as far as we know, his life was pure and unblemished. 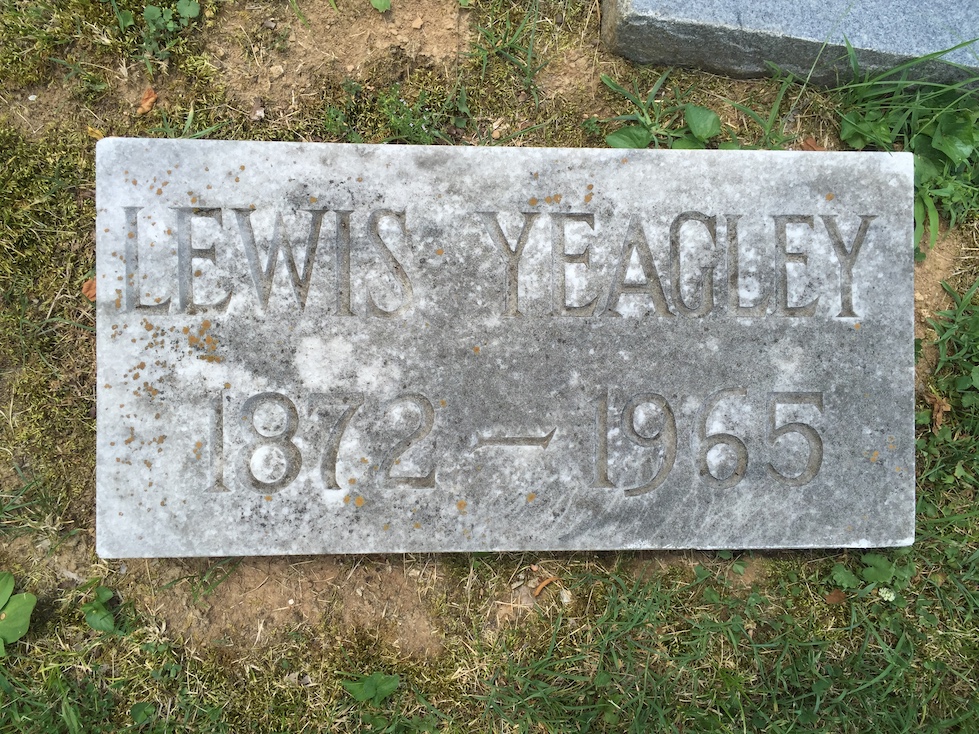