Brief Sketch On The Life Of Gus A. Dunn

Gustus Albert Dunn was born in Readyville, Tennessee, June 2, 1876. His parents were T.F. and Elizabeth Dunn (buried in Murfreesboro, Tennessee). He was part of a family of five brothers, all of whom preached the gospel in the course of their lives. He was married to Mae Mather, and together they had four children. One son, Gus A. Dunn, Jr. also preached the gospel.

Gus was baptized by James A. Harding in March of 1895, at the age of eighteen. The following year he began preaching the gospel of Christ. He was educated at College in Winchester, Tennessee; then at Nashville Bible School and Vanderbilt University in Nashville, Tennessee; and then at Clark University where he received the M.A. Degree; later at Southern Methodist University, Dallas, Texas where he received the B.D. Degree.

As an evangelist he held hundreds of Gospel Meetings, averaging about 20 to 25 per year with great success. In 1904 he preached in Cleburne and had 88 to obey the gospel. In 1912 in Hodges, Alabama he had a meeting where 74 were baptized into Christ. In 1920 he held one Gospel Meeting in Sherman, Texas. In it there were 123 responses, of which 95 were baptized. In 1922 another meeting was held in Sherman that saw 70 additions to the kingdom. In 1897 in Oak Ridge, Mississippi he baptized 88 during the course of the meeting, including two Baptist preachers, John W. Thompson and E.S. Martin. Through the years he baptized more than 1,000 former Baptist church members among the many thousands he baptized.

Dunn had a great interest in writing. He submitted articles to the Gospel Advocate and Firm Foundation on a regular basis.

At the turn of the 20th century many debates were necessary to clarify the teaching of truth against an array of the false teachings of the day. There was the Dunn-Milborn Debate in 1909. He debated the great Baptist champion, Ben M. Bogard in 1910. There was the Dunn-Sands Debate on Catholicism as well.

He served as president of three high schools and two Bible colleges in his lifetime. He was quoted as saying, "I wish I had done more for the Lord and mankind. My work has not been enough nor good enough to satisfy me. May God have mercy on it and me."

Widely known, loved, and respected, G.A. Dunn was a power among sound preachers of the gospel in his generation. Preacher forty years after his death had a Gus Dunn story.

Brother Gus Dunn passed from this life February 28, 1967 and was buried in the Laurel Land Cemetery in Dallas, Texas to await the Lord's call.

Truly A Giant Has Fallen

It is difficult at times to put together a "Life Sketch" of an individual, though it be one you know well. That is not true in the case of Gustus Albert Dunn, Sr., the last of five Dunn brothers who identified themselves with the New Testament church and the gospel of Christ for so many years.

Brother Dunn was one of nine children born to Thomas Franklin and Elizabeth Nelson Dunn, his birth occurring on June 2, 1876, at Readyville, Rutherford County, Tennessee. His early education was in the elementary school in his home district until his early teen years when his widowed mother moved her family to Winchester, Tennessee, where they attended the Winchester Normal in more advanced studies. This made possible considerable advantage to her illustrious sons who became great gospel preachers and defenders of the truth. It is believed by many in their prime years of preaching that the success of their labors was perhaps unmatched by any other group of brothers in their generation. They were noted for filling their sermons with scripture quotations, and this writer recalls counting fifty-two quotations in one sermon in a meeting at Fulton, Kentucky, in 1926. It is a matter of record that he converted two denominational preachers and one entire church in a meeting near Vicksburg, Mississippi, in 1897.

Brother Dunn began preaching at the age of nineteen, and with a heavy schedule of preaching and debating, he advanced his education to receive his B.D. degree from Southern Methodist University and his M.A. from Clark College. His was indeed a fruitful life in gospel preaching, having baptized hundreds, even thousands throughout the United States and in Canada.

He spent the last forty-five years of his life in Dallas, Texas, where he died February 28. He was in the ninetieth year of his earth life. He is survived by his wife, Mrs. Mae Dunn, three sons, G.A. Jr., Rising Star, Texas; Joseph A. of Cleveland, Texas; Robert W. Of Dallas; one daughter, Mrs. Anna Belle Price, Washington, D.C.; a sister, Mrs. Artie Norman, Henderson, Ky., seven grandchildren and three great grandchildren. He was buried in Dallas on March 2. Rex A. Turner and Tom Pickard conducted the last rites at the Edgefield Church Of Christ.

This writer expresses sincere sympathy to the survivors who mourn.

I have one striking characteristic, only are however, in common with the prophet Amos. He began as a poor country preacher, and so did I. When I was a boy my home church, Antioch in Jefferson County, Alabama, had little contact with the brotherhood at large. My acquaintance with gospel preachers was limited to C. A. Wheeler, J. H. Horton. L. N. Moody, Pryde Hinton, Charlie Nichols, and M A. Creel. When I was a junior in high school, John P. Lewis made a sweeping tour through our community to talk to one of the seniors about his attending David Lipscomb College. I did not know until then that such a school existed among our brethren. I had preached my first sermon before I saw a copy of the Gospel Advocate. Verily, I did not begin my ministerial life as, "a prophet, neither as a prophet's son."

In those days every gospel preacher was in my sight a great man of God and worthy of my imitation. When I began to preach, I added other able, dedicated preachers to my list of acquaintances. Those men took a sincere interest in my welfare. I sought out their company, and I asked for and received their instruction, guidance and counsel. I sat at their feet, and I learned.

In time, I learned that those gospel preachers were after-all only men and that they were subject to mistakes and the weaknesses of the flesh as other men are. I was momentarily disillusioned and discouraged, but I immediately recovered from my disillusionment and discouragement when I realized that I, too, am only a man. As I reflect upon the past, I have become increasingly more keenly conscious of how indebted I am to those gospel preachers who have helped me so much.

The years have passed swiftly, and many of those men have already gone on to their reward. Others are now counted as old men, and I myself am counted as a middle-aged man. Recently two men to whom I am very much indebted, John T. Lewis and G. A. Dunn, Sr., passed from this life.

As I reflect upon my acquaintance and association with John T. Lewis, I could summarize his influence upon my life by saying: As a boy I feared him; as a beginning preacher I respected him; and as a coworker I loved him. John T. Lewis set for himself one goal or aim in life and that was to preach Christ. In his mind, there was no calling greater than that of preaching the gospel.

If Brother Lewis had lived until the tenth of March he would have been ninety-one years of age. He had lived in Birmingham for sixty years. There is hardly a community in the great Birmingham area where he did not at one time or another pitch a tent and conduct a gospel meeting. Brother Lewis was a devout student of the Bible. He possessed a large and very select library. He was positive and outspoken, but he had the fine characteristic of bring able to disagree with another and at the same time maintain a cordial relationship.

I am thankful for the association that I have had with Brother Lewis. He has been a guest in our home during gospel meetings and lecture programs, and I and the members of my family have been enriched by our having had such association with him. I conducted some three meetings at the Ensley church when, he was the minister. I thoroughly enjoyed everyday of each meeting.

Early on March 1, I received a telephone call from Sister G. A. Dunn. Sr. , a gracious lady, a loyal wife, and a devoted Christian. She was calling to inform me that Brother Dunn has passed away the night before. Sister Dunn's desire, and also that of Brother Dunn, was that I should conduct the funeral. I was assisted by Tom W. Pickard, minister of the Edgefield church, Dallas, Texas.

The funeral was held in the Edgefield church building where some three to four hundred kindred and friends had gathered. In addition to Brother Dunn's children and grandchildren, a large number of nephews and nieces from several States were present. There were also present several gospel preachers. If Brother Dunn had lived until the second of June, he too would have been ninety-one years old.

Brother Dunn, is another one of the gospel preachers to whom I am much indebted. He was about sixty years old when I first heard him preach. I thought that he was one of the greatest preachers ever, but the brethren in Montgomery said that I should have heard him when he was in his prime. The late I. L. Boles once said of Brother Dunn: "No dancing master was ever more graceful on the dance floor then G. A. Dunn was in the pulpit." He was tall handsome and genial in manner. He was always dignified and well-dressed.

Brother Dunn, was a man of great intellect He held two graduate degrees, the M.A. and the B.D. degrees. Except for Gus Nichols, I never knew a man who had committed to memory so much of the Scriptures and thus could call up the book, chapter, and verse that would express so accurately the point at hand.

Brother Dunn was often in our home, and he had a great influence on my life and that of my family. He filled me with a burning desire to study the Bible and to go everywhere preaching the Word. In my mind, I can see him now when he would arrive at the Bus Station to conduct a meeting. He often would be carrying two suit cases, one containing his clothing, and the other one, made of metal, containing numbers of chart sermons.

Brother Dunn held from twenty to twenty-five meetings per year so long as he was active, and he baptized thousands of persons. In a single meeting at Sherman, Texas he baptized ninety-five persons. He engaged a number of able sectarians in debate. The greatest sermon that I ever heard Brother Dunn preach was on the subject, "Heaven." If anyone who reads this should happen to have a recording of his sermon on "Heaven;, I would like very much to get a copy of it.
-Rex Turner, Gospel Advocate, May 4, 1967, pages 277,278

Directions To The Grave Of Gus Dunn

Gus A. Dunn is buried in the Laurel Land Cemetery in Dallas, Texas. Just south of Dallas on East I-35 take the Laureland Exit 420. and travel east. From the exit you should be able to see the cemetery as it is adjacent to the east side of the freeway. 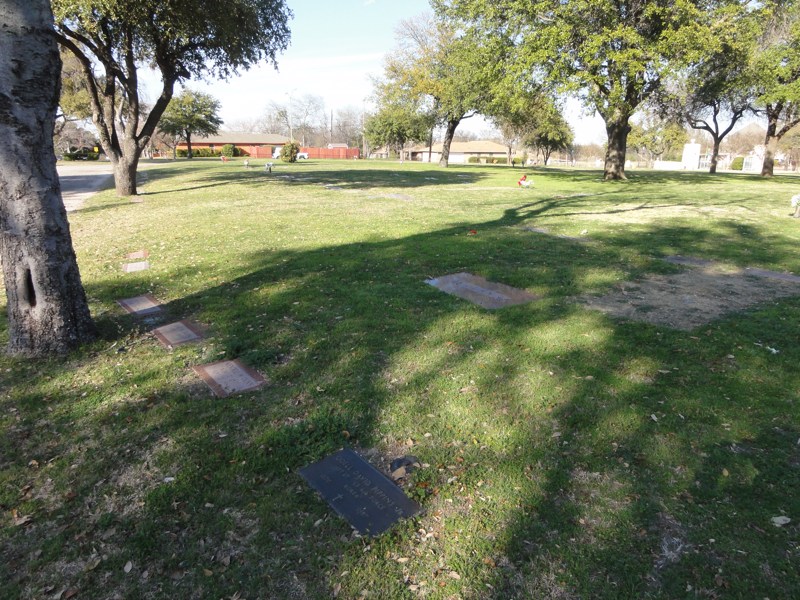 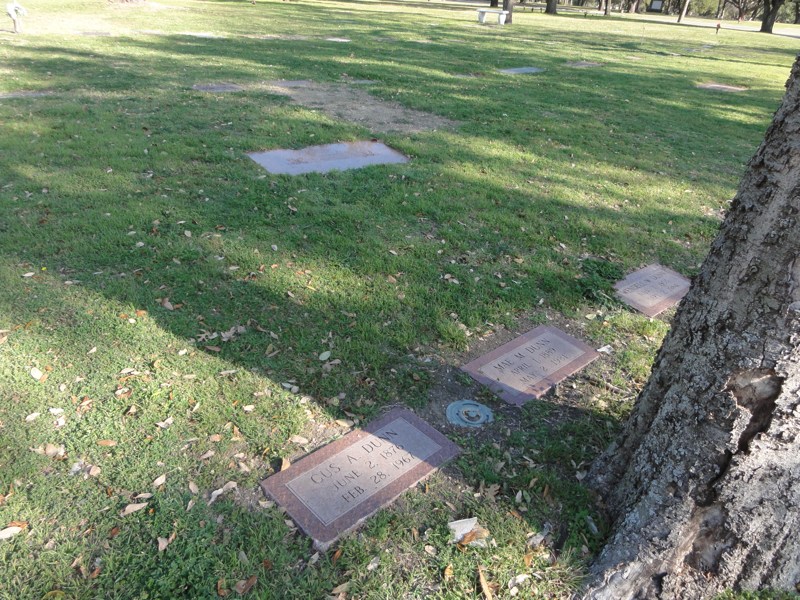 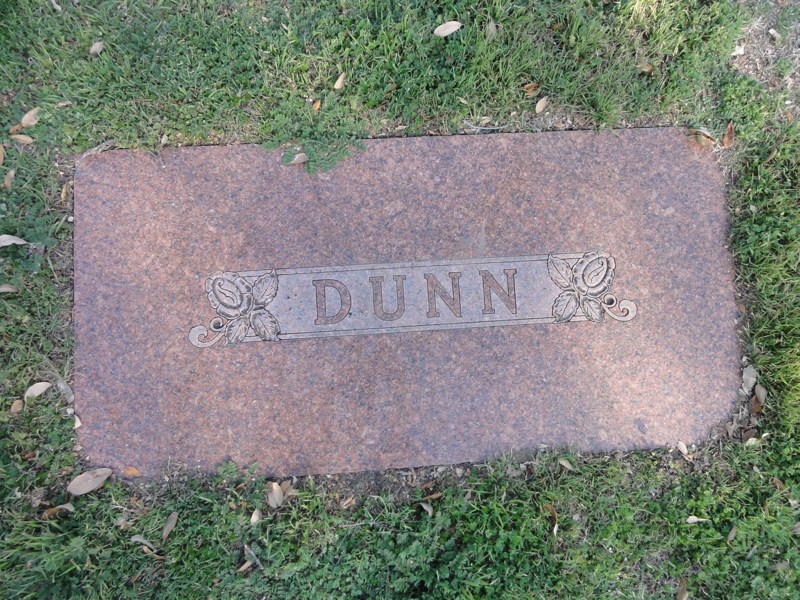 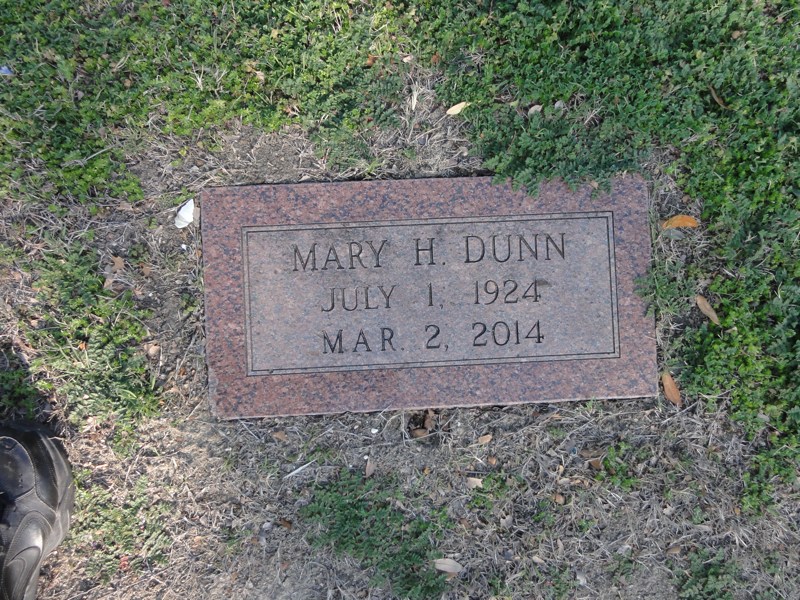 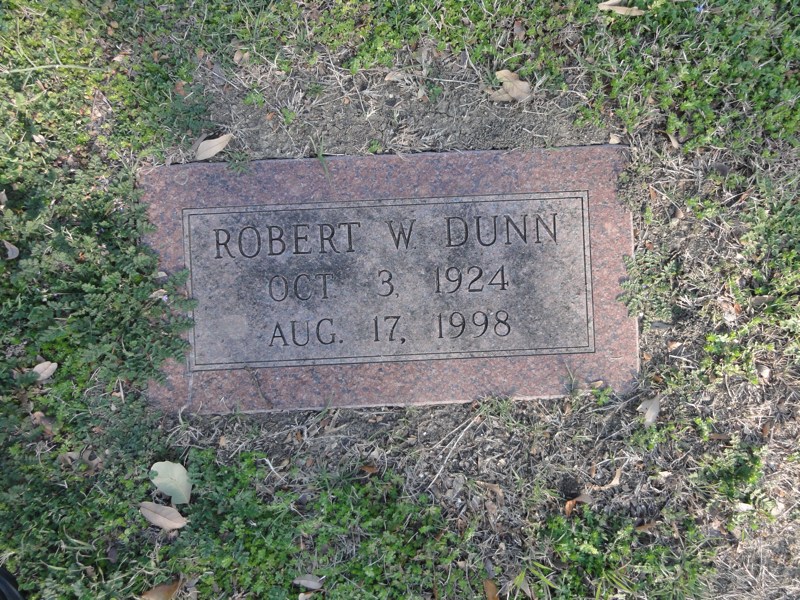 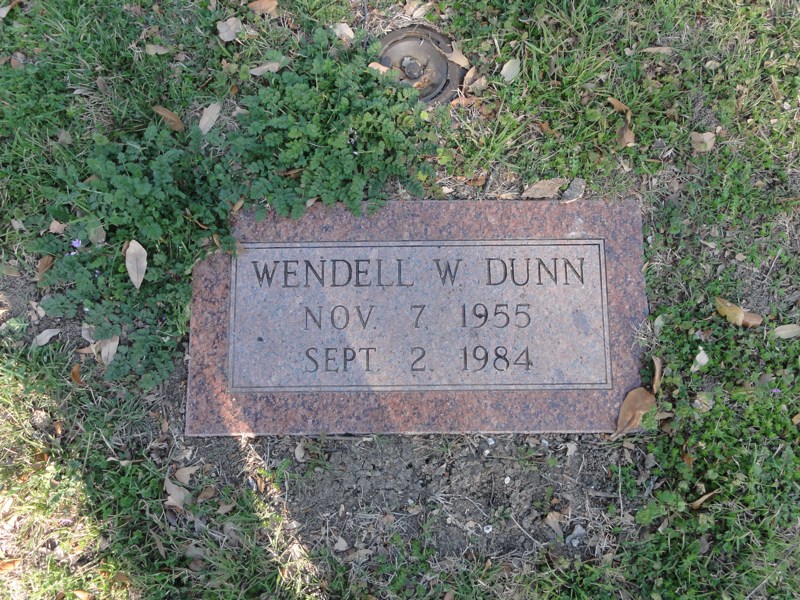 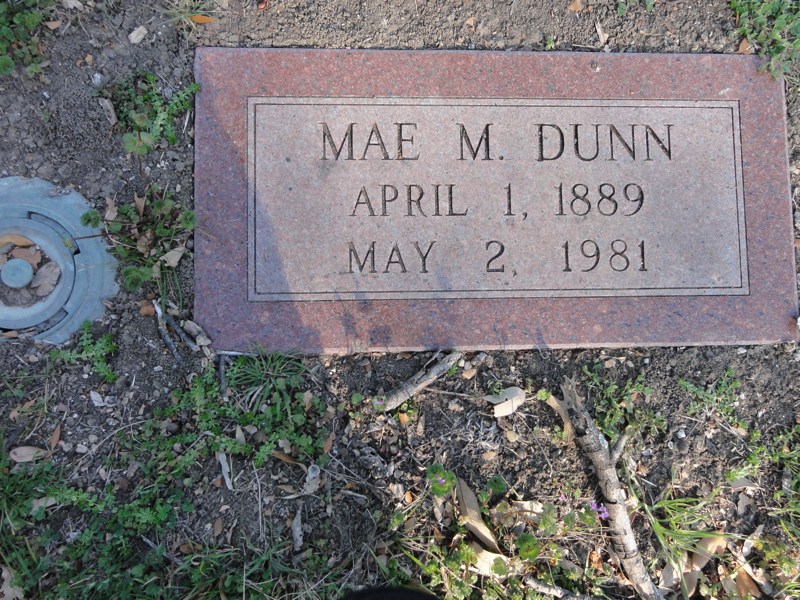 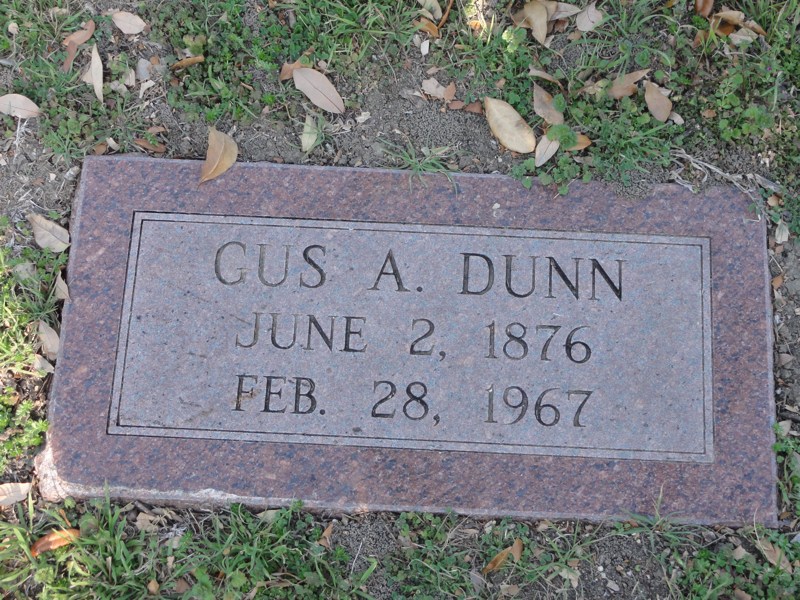