Obituary Of John E. Dunn In Word And Work Magazine

On January 8, there passed away from our midst the beloved John E. Dunn, a good man and a great, and a faithful, earnest servant of the Lord, widely known in the church of Christ. It was when he was a student in the Nashville Bible School under J.A. Harding, on my entrance of the school, that I first met him. I remember quite well Brother John E. Dunn's kindness and loving interest and regard for me in those days. The estimate I formed of him then I have never had occasion to change; but through the years I found him to be always the same high-minded, clean, conscientious Christian gentleman, and, more than that, even a true, warm-hearted brother in the Lord. He was a strong preacher; and he preached not in the pulpit alone, but in every home. He could gather the members of a household around him and hold their interest for hours while he talked and taught and discussed the things of Christ with them. I have never seen just his equal in this respect. And in every community where he labored he did a great good work. He really won people to the Lord. He brought them to repentance, he shamed them out of their wrong ways, he led them to trust in Jesus Christ their Savior. And he won the love, and the high regard of the people among whom he worked. He died too early as we would think (he was 65 years old) but it was God's time, and there are no regrets, although we mourn his loss. He rests from his labors and his works do follow him.

JOHN E. DUNN IS DEAD
Just as we go to press, we have received
from Brotber G. A. Dunn the following telegram:
"Brother John E. Dunn passed away
at his home in Houston at eleven thirty p. m.
January eighth." While we were aware that
Brother Dunn bas been in poor health for
some time, we deeply grieve his passing. The
bereaved have our sincere sympathies.
G. H. P. SHOWALTER.
Firm Foundation, January 12, 1932, p.5

John E. Dunn (L) Was One Of The Five Dunn Brothers Who Preached The Gospel In The Early 20th Century

Directions To The Grave Of John E. Dunn

John Dunn is buried in the Forest Park Lawndale Cemetery at 6900 Lawndale Ave., Houston, Texas. Phone #713-928-5141. In central downtown Houston take I-45 south. Take Exit 42. Travel on the Frontage Road (Gulf Fwy) down until you can turn left on S. Wayside Dr. (ALT 90). Counting on the right travel 8 or 9 streets and turn right on Lawndale St. The cemetery will be on your right. Below is a map showing J.E. Dunn buried in what is identified by the red "2" on the map. 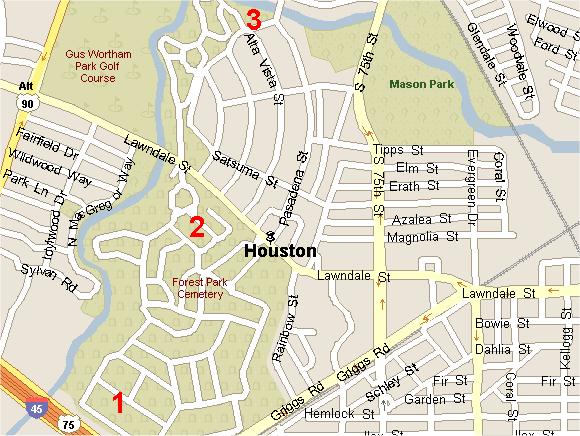 Look For The ROSS GRIMM SCHROEDER Monument, With Dunn Plot Three Rows Behind