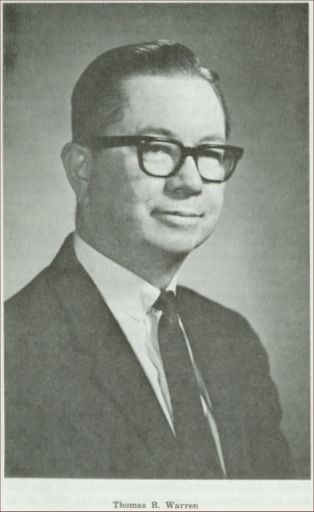 The Life Of Thomas B. Warren

He did full-time work in Liberty, Houston, and Ft. Worth, Texas. He preached twenty to twenty-five gospel meetings per year. He was editor of the Spiritual Sword for twenty years, beginning with Volume 1, Number 1, in October of 1969 and continuing through Volume 20, Number 4, in July of 1989. He also served as a staff writer for the Gospel Advocate. He was a regular speaker for "5 Gospel Minutes" daily radio broadcast in connection with the "Gospel Hour" during the mid-1970's. He has engaged in numerous debates and has written extensively. One of his most renowned debates was in 1976 with Anthony Flew.

He authored a number of books including: Marriage Is For Those Who Loved God And One Another; Our God - A Sun And Shield For Troubled Hearts; Lectures On Church Cooperation And Orphan Homes; Keeping The Lock In Wedlock; Logic And The Bible; and When Is An Example Binding?. He has produced a number of debates in transcript form such as the Warren-Ballard Debate, Warren-Flew Debate, and the Warren-Matson Debate.

Thomas B. Warren was a scholar, the likes of which, very few have attained in their lifetime. A master logician, and gospel preacher, he held the banner of the cross high all the days of his life. He rests from his labors, and his works do follow him. 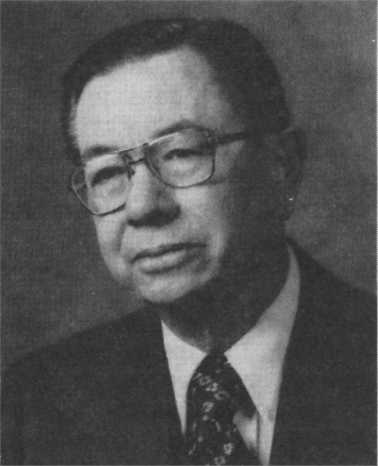 We were saddened to learn of the passing of Thomas B. Warren on August 8, 2000. Brother Warren was born on August 1, 1920 in Carrizo Springs, Texas. He served as editor of THE SPIRITUAL SWORD for twenty years, beginning with Volume 1, Number 1, in October of 1969, and continuing through Volume 20, Number 4, in July of 1989. Brother Warren was a man of great accomplishment. He attained his Ph.D. from Vanderbilt University, and unlike, some who have earned high academic degrees, he used his education to advance the cause of Christ. He served as chairman of the Bible Department at Freed-Hardeman University, he was professor of philosophy of religion and apologetics at Harding Graduate School, and engaged world-renowned atheists in debate in defense of the truth. Brother Warren was the author of numerous books, including Marriage Is For Those Who Love God And One Another; Our God—A Sun and Shield For Troubled Hearts, Lectures on Church Cooperation and Orphan Homes, along with several of his notable debates such as the Warren-Ballard Debate, Warren-Flew Debate, and Warren-Matson Debate.

Brother Warren was associated with the Getwell Church of Christ in Memphis for several years. In addition to serving as editor of THE SPIRITUAL SWORD, he was co-director of the Spiritual Sword Lectureship. Members of the Getwell congregation remember brother and sister Warren with great affection, along with two of their children who were often involved with the church there—Lindsey Warren, now a teacher at Freed-Hardeman, and Jan (Mrs. Jon Coleman) of Jonesboro, Arkansas. Brother and sister Warren (Faye) were married October 3, 1941. We extend our sympathy to his wife and children. Karen, Jan, and Lindsey. “Blessed are the dead which die in the Lord from henceforth: Yea, saith the Spirit, that they may rest from their labors; and their works do follow them.” (Revelation 14:13.)

-From the October 2000 issue of The Spiritual Sword by it its editor, Alan Highers

2008 Lecture On The Debates Of Thomas B. Warren, by David Lipe MP3

Thomas B. Warren was born way down in Carrizo Springs, Texas (southwest of San Antonio). He was a great athlete as a young man (baseball, basketball, tennis, golf, and ping-pong!), even played a few rounds of golf with the late great Byron Nelson, but he is forever linked to and known for his academic endeavors. He graduated high school as valedictorian of his class, graduated from Abilene Christian University with the B.S. degree (magna cum laude), from the University of Houston with the M.A. degree (in religion), and from Vanderbilt University with the M.A. and Ph.D. degrees (in philosophy). He also did post-graduate studies at various times in various places. Additionally, he was a veteran of the U.S. Air Force having served during World War II as an aerial navigator.

Tom served as a teacher of Bible, Theology, Christian Apologetics, Philosophy, Logic, and Mathematics. He taught at Abilene Christian College (1946-47) and was Chair of the Department of Bible at Fort Worth Christian College where he was also President (1959-61). He was Chair of the Department of Bible at Freed-Hardeman College (now University) from 1964-1971. He was Professor of Philosophy of Religion and Apologetics at Harding Graduate School of Religion (1971-79), and also served as Dean of the Graduate School and Professor of Philosophy and Christian Doctrine and Apologetics at Tennessee Bible College.

I believe it would be fair to say that Tom Warren cast a large shadow. In a number of different ways, he made an impact on people and places – on students and congregants – on opponents and beloved.

Tom made a lasting impact because of his wife. He was married to Faye C. Brauer on October 3, 1941. They remained a dynamic duo for nearly 59 years until his death in August of 2000. Faye was the perfect partner and compliment to Tom. They had a love and a marriage to be envied and emulated. Dr. and Mrs. Warren were the parents of two daughters (Karen and Jan) and one son (Lindsey). Those three children gave Tom & Faye five grandsons. Really and truly, one cannot properly consider the life of Tom Warren without due honor and consideration of his bride.

Tom made a lasting impact via the written word. He was a prolific writer, having authored or edited more than fifty books. He tackled subjects such as biblical interpretation, marriage & divorce, human suffering, the logical problem of evil, life after death, the deity of Jesus Christ, the authority of Scripture, and the existence of God among others. Christian bookstores, Universities, and Preacher Training Schools continue to demand and make use of his work. He (along with others such as the late Garland Elkins) also edited journals and lectureship books. Many know that he was the founding editor of the quarterly journal, the Spiritual Sword, and continued in that role for twenty years (from 1969 – 1989). However, most have no idea that the journal did not start in Memphis at the Getwell Church of Christ. The short-lived origin was actually Tom & Faye Warren’s garage in Ft. Worth, Texas. In 1958, Warren, Roy Deaver and A.G. Hobbs produced a monthly journal titled the Spiritual Sword that spanned eleven issues. The publication would reappear some decade later under the oversight of the Getwell eldership.

Tom made a lasting impact as a debater. He held 18 public debates. The most wellknown would have to be the encounter with atheist Antony Flew in 1976. He debated such issues as the existence of God, the Gospel Plan of Salvation, marriage & divorce, and Christian ethics. He was bold in his desire to stand on the polemical platform – he was often connected to campaigns where full-page ads were taken out in large and local newspapers challenging (begging and pleading with) atheists to public debate.

Tom made a lasting impact as a preacher. He served as the located or pulpit or associate preacher for a number of congregations. Notably among them would be congregations in Ft. Worth and Seagoville, Texas and in Memphis, Cookeville, and Somerville, Tennessee. When his health allowed, there were times he held as many as 25 Gospel Meetings in a year. He loved to preach – and he was powerful.

The above facts are what most know about Thomas B. Warren. He was an imposing professor. He was an intimidating debater. He was a straightforward and uncompromising editor. He was a forceful preacher. However, there are a wealth of things that many would be surprised to hear.

Tom Warren was funny! He loved to laugh and sing. Not only did he seek to get his grandsons to think, he sought to make them laugh. Since he was proficient in several languages, he would sing silly songs in Spanish and sometimes German. He had sayings, phrases, and other ways of turning words around that were unique to him. He was the nickname king – everyone in the family had numerous names foisted upon them that soon simply became part of the domestic fabric. Your given name was banished. Your new “unique” name(s) was/were here to stay.

Tom Warren was also an amazing artist. In his younger days, he was a commercial cartoonist. To the delight of his grandsons, Tom could at any moment quickly (and perfectly) draw Snoopy, Beetle Bailey, Dagwood, or any other comic strip character. These skills would serve him well as he produced illustrations for his books and debate charts. However, his talent was not limited to the pen/pencil. He was also remarkable with the paintbrush. He produced a number of impressive portraits and nature / landscape / wildlife paintings.

-Bart Warren, My Heroes In Ministry, The Jenkins Institute, pages 31-34

Note: Bart Warren is the grandson of Thomas and Faye Warren. He has preached in Glasgow, Kentucky a good number of years. He has continued in his grandfather's footsteps producing literature on Christian Apologetics. He a major contributor to the Warren Christian Apologetics Center, an effort devoted the preservation and promotion of the efforts begun by Thomas B. Warren.

In January, 2002, it was my joy to attend the 25th Annual Ft. Worth Lectures at Brown Trail Church of Christ, Ft. Worth, Texas. One of the members there, Tom Gardiner, took me over to Blue Bonnett Hills Cemetery to see the graves of brother Thomas B. Warren and W.W. Slater.

The grave of Thomas B. Warren is located in Colleyville, Texas between Gravevine and Ft. Worth. On Hwy 26 in Colleyville, heading east you will see the Blue Bonnett Hills Cemetery on your right. Enter at the eastern most entrance (closest to the mausoleums) and proceed into the cemetery. Go to the first left and park in front of the mausoleum. The edifice is open air and as you enter the main corridor from the front, go down on the right hand side. On the bottom row on the right hand side, just before the first corridor to the right is the grave of Thomas and Faye Warren.

While in this graveyard, be sure to visit the grave of W.W. Slater. He and his wife are buried at the top of the hill past the fountain. See his web page and print out the directions to his grave. Also buried here is Leroy Brownlow and Avon Malone.