Brother Wilmeth was born in Lawrence County, Arkansas, Oct. 17, 1835. The family moved to Texas and settled near where McKinney now stands in 1846.

At the age of twelve, he obeyed the Gospel and was baptized by Brother Polly. In 1857, he went to college at Bethany, Va. He wore a suit which his mother had spun and wove, cut and made with her own hands. He did janitor work and preached that he might make his means go as far as possible.

While here he was a student of Alexander Campbell. When he returned from Bethany, he married Miss Martha Florence Lowry, near his home at McKinney, Texas.

He was very much opposed to the Civil War, but he served as Chaplain and did much preaching to the soldiers.

On July 20, 1868, his wife died, leaving him with five small children. After this, he traveled to Mexico, studying language and customs, teaching and preaching among them. Also in company with his brother, C. M. Wilmeth, he attended school at Lexington, Kentucky, where he finished his school days. While there he was a student of J. W. McGarvey.

He has taught and preached in many places and it seems that every one loved him. We are constantly meeting those who knew him and loved him years and years ago.

He taught in Add-Ran College at Thorpe Spring. He taught at McKinney, at San Marcos, and many other places. His last teaching was a Corinth, Arkansas where he assisted his brother, C. M. Wilmeth in a college there. Since then he lived on his farm near Ebony, in Mills County, a quiet little nook on the Colorado River, about twenty-five miles from Brownwood.

Here he lived a busy, active life. When he was at home he was always busy about the place, or if he was too tired to work with his hands, he rested by reading and writing. He read extensively and wrote some publication. His mind was a wealth of useful knowledge.

He was a builder. He tried to build to the good of future generations. He took great pride in his orchards and gardens and his budding pecans. He liked to see things grow and improve.

He was poetic in nature, kind, and courageous. He did not mind the hard things in life. He was humble. He did not seek honor of himself. He walked the humble paths of life and mingled his life freely with the lowly. He was always trying to lift his fellowman to a higher purer plane of living.

Geniality radiated from him as warmth from the sunshine. Friend or stranger was always welcome within his gates and he made himself a welcome guest wherever he might be. He mingled freely with the people of his community. He taught in their homes and preacher far and near in their churches and school houses. He advised with those who needed advice, comforted those who needed comfort. He remembered the widows and orphans and was always a friend to the needy.

He was not rich in this world's goods, but was always rich enough to help someone else. I always thought of him as laying up treasures in heaven.

He never gave up preaching entirely, although he had grown deaf and feeble. Only last summer during a re-union at his home, he rode horseback by himself seven miles to a little place called Ridge, to fill an appointment. He came back Monday so happy because everyone had been so kind to him, and even the little children had told him that he preached a good sermon.

In August, think, he rode horseback across the river to New Hope, a little place near Richland Springs, to be with Brother A. Ellmore in a meeting. He stayed during the meeting. Soon after he came home he took his bed and was not able to be up any more. Hosts of friends poured in from day to day, and when he was free from pain his mind was alert and he was eager to talk and plan for the future.

This was a glorious year for him. The rains made West Texas blossom as the rose. He called his children home Jul 10 for a family re-union. His orchids were breaking with their loads and his gardens bearing an abundance that could never be gathered. On the day of his death his gardens were still bearing luxuriantly and his pecan trees bearing down their abundance.

Many friends gathered for his funeral. Brothers J. B. Jones and Walter Cook both made beautiful tributes to his life and work. A man who was modestly great; whose life was rich and ripe; a Christian faithful until death, who loved his God with all his heart, his soul, his mind, and loved his neighbor as himself.

Directions To The Grave Of James R. Wilmeth Sr.

James R. Wilmeth and family are buried in the Ebony, Texas Cemetery. Ebony is located in a very rural section in Mills County, in south central Texas.

From Waco: South of Waco on I-35N take the SR340 Loop N toward the west. About one mile turn left on Woodway Dr. Hwy. 84. and head out of town toward Goldthwaite. Head 85 miles into Goldthwaite. In Goldthwaite you will come to split. Take Hwy. 15 to the left and cross over the railroad tracks. Take a right on Hwy. 183/16. Go four blocks and turn left on Co. Rd. 574 (Hannah Valley Rd.). Head out of Goldthwaite about 20 miles through the little community of Regency. Take the third road to the right on CR-536 (Gravel Road), and head north. Go about one mile and turn left on CR-538. The cemetery is on the right. Go into the cemetery and the Wilmeth plot is toward direction across from the entrance. GPS location below is the actual location in the cemetery.

From Brownwood: Head south on S. Main Avenue (Hwy. 377). South of town head east toward Camp Bowie Military Reservation on Hwy. 45. Hwy. 45 will cut toward the south. You will go through part of the Military Reservation. Go south about 12 miles and turn left on CR-532 (Gravel Road). Go about 2 1/2 miles to enter the Ebony Community. Turn south on CR-536 to Buffalo Community. Turn right on CR-538 and cemetery is on the right. Go into the cemetery and the Wilmeth plot is toward direction across from the entrance. GPS location below is the actual location in the cemetery.

While in the cemetery, be sure to visit the grave of another gospel preacher of yesteryear, Don Vinzant. 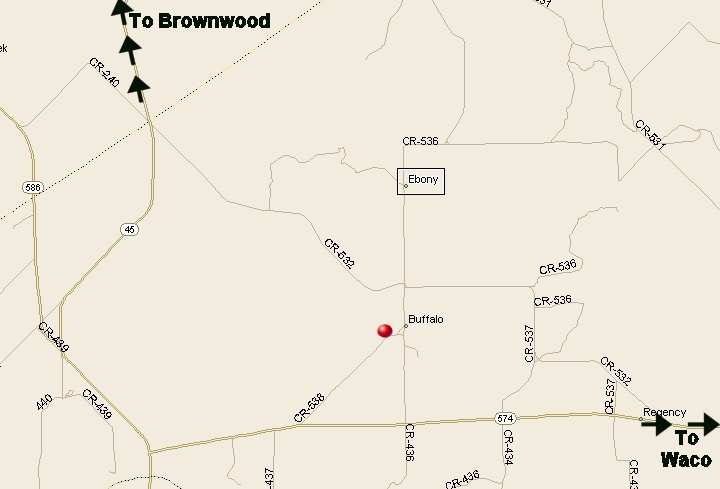