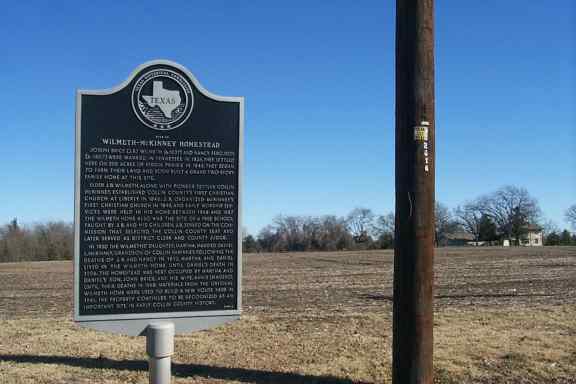 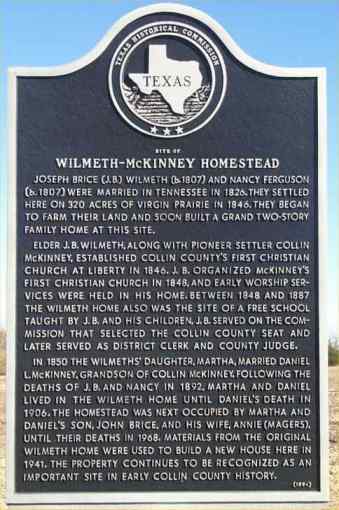 This tract of land of the J. B. Wilmeth survey north of McKinney contained the family home, the first plowed ground in Collin County, the site of the organization and first meetings of McKinney's First Christian Church, and the first free school taught in Collin County.

Elder Joseph Brice Wilmeth and his wife, Nancy Ferguson Wilmeth, both born in 1807, he in North Carolina and she in Tennessee, were married in Tennessee in 1826.

In the fall of 1831, the Wilmeth family migrated to Lawrence County, Arkansas. Over a course of fourteen years, no one was more involved in the activities of the area than J. B. Two of J. B.'s brothers, Frank Crawford Wilmeth and James Washington Wilmeth, were Christian ministers. It was while here in Arkansas that J. B. also became a minister of the Christian faith, along with serving in various other occupations--county clerk, farmer, carpenter, blacksmith, and teacher. He compiled an arithmetic book, from which he taught daily from January 8, 1842 to August, 1842. This arithmetic book, written by a quill pen, is still treasured by one of his descendants.

In 1845, J. B., his family, and the families of his brother, Frank Crawford Wilmeth, and of J. O. Straughan headed a movement to Texas. They established their first headright in western Dallas County. Hardly had their cabins been completed and their first crops harvested when the fear of threatening Indians drove them back to this area of Collin County. 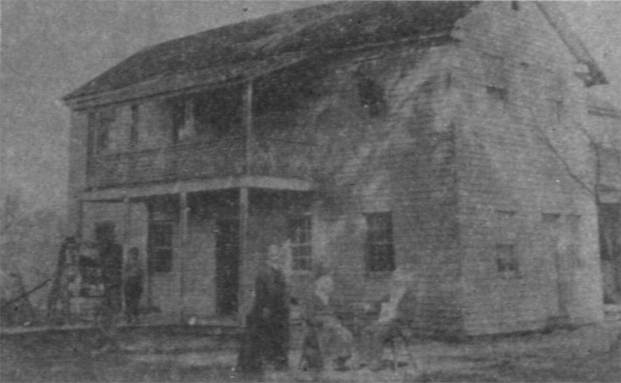 In June, 1846, J. B. purchased the 320 acre claim of Moses Wilson just north of McKinney. Not long had J. B.'s wagons been unloaded until his blacksmith shop and Nancy's loom were set up. His plow and teams of oxen turned the first prairie sod of Collin County.

Not long afterward, construction was started on their new home. Lumber was hauled overland by oxen teams from Jefferson, Texas. J. B.'s family built this home, using brick which they had made for the chimney and fireplace. The beams, hewed from logs, were thirty-six feet long. The rafters were coupled to them with bois d'arc pins. The studs were hewed, as were the sleepers, from bois d'arc.

The house was originally built two-story with a one-story addition in back, but when the Christian Church was organized by Elder Wilmeth, he added a second story to the back part of the house in order to allow room for church services and for the establishment of the first school to be organized in Collin County. Elder Wilmeth's evangelistic efforts, preaching and founding churches, extended to Dallas, Denton, Grayson, and Fannin counties. The first church in Collin County was organized by Joseph Brice Wilmeth and Collin McKinney in the home of Carroll McKinney, which was near the Collin-Grayson County line, in November 1846. Charter members included sixteen members of the J. B. Wilmeth and Collin McKinney families and five slaves. Soon after, the congregation moved to a community house a mile south and named it Liberty, to be known later as "Mantua." In 1848, J. B. Wilmeth organized a group at his home two miles north of McKinney, from which emerged the First Christian Church of McKinney. Charter members included J. B. Wilmeth, Frank C. Wilmeth, Henry Webb, John Larimore, and James Masters. First meetings were held in the Wilmeth blacksmith shop, which had been seated with split log benches. Later, meetings were held in an upper room of the Wilmeth home. With an outside stairway, this new addition was built specifically for the purpose of worship and teaching. J. B. Wilmeth and his children also taught a free school, most of the time in their home, from 1848 to 1887. Two of J. B.'s sons, James R. and Collin McKinney Wilmeth, were also Christian ministers and teachers. Both taught in Thorp Spring at Add-Ran College (now Texas Christian University).

In 1847 Elder Wilmeth was one of five appointed to the commission to secure a site and lay out a town for a county seat. He also served as District Clerk and was later elected County Judge.

Having acquired large tracts of land, J. B. Wilmeth, in the early fifties, began to buy slaves and devote his attention more to farming and raising livestock. He had 200 acres in cultivation. With a harvester and thresher of his own, his wheat and barley output was a large amount.

When the Civil War occurred, he contributed liberally to the outfitting of the Confederate Army by furnishing forage, mules, horses, and men (seven of his sons were enrolled in the ranks and two were killed in the cause). He assisted in organizing and drilling regiments of men in Collin County and served as Lieutenant Colonel in the State Militia.

Nancy Wilmeth died January 14, 1892; J. B. died the next day, January 15. They were laid to rest side by side in the same tomb at McLarry Cemetery, located in the Wilmeth Community, north of McKinney.

Following their deaths in 1892, their daughter, Martha Marilea (b. 1831) and her husband Daniel Leak McKinney (b. 1827), grandson of pioneer Collin McKinney (for whom both the city of McKinney and the county of Collin were named) moved from their home east of Van Alstyne to the homestead. They were the parents of nine children: Joseph Ashley, Sara Elizabeth, James Milam, William Thomas, Jackson Handley, Nancy L., Daniel Edward, Margret Annie, and John Brice.

After Daniel Leak's death in 1906, Martha M. sold the property she owned, including the homestead, to her youngest son, John Brice McKinney. Martha M. was approaching her one hundredth birthday when she died while living with her son, Jack McKinney, in Van Alstyne, on October 2, 1930. She is buried beside her husband and parents in the McLarry Cemetery.

John Brice McKinney (b.1877), farmer and apiarist, and Annie Magers (b. 1879) were married in 1900 in the little Wilmeth Chapel on Wilmeth Road (built by Elder J. B. Wilmeth prior to his death in 1892). They lived their entire married life at this homestead, both dying in 1968. All of their children were born on this homestead: Drury Metz, Joe Magers, Collin, Clara B., J. B., Armyn O., and Ridgell M.

After extensive remodeling during the passing years, an end came to the old home in 1941, when it was razed and a more modern home built by the John B. McKinney family. Much of the lumber, windows, doors, and fixtures of the old home were incorporated into the present structure.

In 1982, John Brice and Annie's granddaughter, Shirley Reddell Cooper (who was also born in the old home) and her husband, C. Don Cooper, purchased this last tract of land in the Wilmeth survey from the remaining heirs, giving her mother, Clara McKinney Reddell, a life estate, as she had had from her parents, in the acreage containing the dwelling and out buildings.

The homestead is listed in the Texas Land Heritage Registry, First Edition, published in 1974 by the Texas Department of Agriculture.

This homestead site also qualified for an official Texas Historical Marker in August, 1993.

Webmaster Note: While searching the web one day I found the above article, and just stored it to my hard disk. Months later, while searching for Wilmeth's grave, I stumbled onto the property sight while in McKinney in early 2002. It was not until I began putting my webpage together that I stumbled across this forgotten file on my computer. Hey, it pays to save things! You never know when it will come in handy. Thanks to Ms. Reddell for her family history!

Location Of The Old Wilmeth Homeplace

While visiting the grave of J.B. Wilmeth, be sure to visit the property that was once owned by J.B. Wilmeth. It is sign posted by the above Texas State Historical Marker. From the cemetery, travel back to the corner of Wilmeth Rd. and McLarry Rd. Turn left and travel east on Wilmeth Rd. to the end. Turn right on Hwy 5. and on your left is the Historical Marker showing the land. The home on the corner of the property facing (551) Cty. Rd. 274, was built with parts of the old homeplace where Wilmeth lived in the 1800's.

Back to J. B. Wilmeth Page