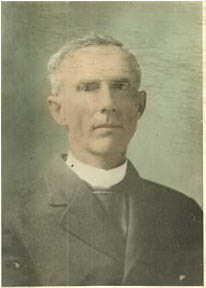 The Life of C.S. Buck

Young Cephas grew up and attended Milligan College in Carter County, Tennessee. While there he married fellow-student, Emma Katherine Shelburne. She was the daughter of another Virginia preacher, Samuel Shelburne (1790-1871) and her mother was Fannie Boswell Shelburne on December 28, 1880. (Interestingly, Cephas was the namesake of Katherine's father.)

One of Cephas’ brothers followed in his father’s footsteps as a preacher of the gospel of Christ. David Taylor Buck preached among churches of Christ all his life. He was born in 1855 and died in Carrollton, Kentucky, near the Ohio River, June 25, 1910. Preaching was Cephas’ great passion. He was involved in ministry like his father all his days. He wrote a good bit of poetry, some of which was published in the local newspaper. Below are several examples of his talents in this genre.

C.S. Buck passed from this life the 12th of August, 1924. He was buried next to his second wife Nora in what is now called Buck Cemetery, just off the Holton River, in Brumley Gap, Washington, Virginia.

Milligan College, located in East Tenn. about five miles S.E. of Johnson City, is where my Father, Cephas Buck and my Mother Katherene Shelborn (sic) were attending school in the year of 1880.  I do not know the details of this romance. But the records show they were married in this year.  Milligan is a Christian College and Papa had been studying for the ministry. [After their marriage,] they went to housekeeping with Grandma [Mary E.] Buck.  Her husband had died some time before that.  Papa [Cephas] contracted to buy the other children's interest in the estate, and he and Mama [Kate] began teaching school.

In 1881, Minnie was born, which put an end to the mother's teaching. In Nov. 26, 1883, Samuel David was born and named after both his grandfathers. In 1886, Mary Fannie was born and named after her two Grandmothers. Then Roy McGarvey was born in 1888.  In 1890, Cephas Jr. was born.  He died one year later, 1891. Mama also died in that year. [After contracting pneumonia.] Papa had gone to Hopson,Tenn. about 1889 and was running a store.  I was left with Grandma at the farm because I was getting big enough to help with the chores.  Shortly after Mama and the baby died, the store burned to the ground, and Papa had no insurance. He was busted. He came back to Grandma's place with the children where she could look after them while he taught school.  During the winter of 1892-3, when he was teaching at a place called Gravley point he fell in love with one of his students, Nora Foglesong.  They were married in 1893.  Nora was a beautiful girl, with fair skin and very black eyes and hair.  Grandma was very mad because Nora was not much older than Sister Minnie and Papa was a teacher and a minister and should be dignified enough to find some one near his own age.  She raised such a fuss about it that Papa rented a store building at McConnell Switch, a few miles East of Abingdon.  There he took his bride and all the children except me. Grandma needed me to help her on this big farm.  There were cattle, hogs and sheep to feed.

The store at McConnell Switch was not a success. So Papa rented a store building at Brumley Gap, which is about 10 miles North. Here he moved his family and store.  This was in 1893.  I was then 10 yrs. old and still helping Grandma.

Papa had purchased the children's interest in the place but she had full control of it during her lifetime.  Uncle Ephraim had a place about half mile east of Papa's new location in Pore Valley. Typhoid fever had gone through Uncle E's family and taken his wife and one child.  So he traded Papa this place for Papa's equity in Grandma's place.  then it became Uncle's duty to look after Grandma.  So he married his first wife's sister and moved in with Grandma.  This relieved me so I could go and live with Papa and my new mother.  This was in 1894, and Papa soon moved into the place where Uncle had lived and had Typhoid. He used the front room for a store until Papa could build a store house.  We never took typhoid, perhaps it was the turpentine he gave us about once a week." 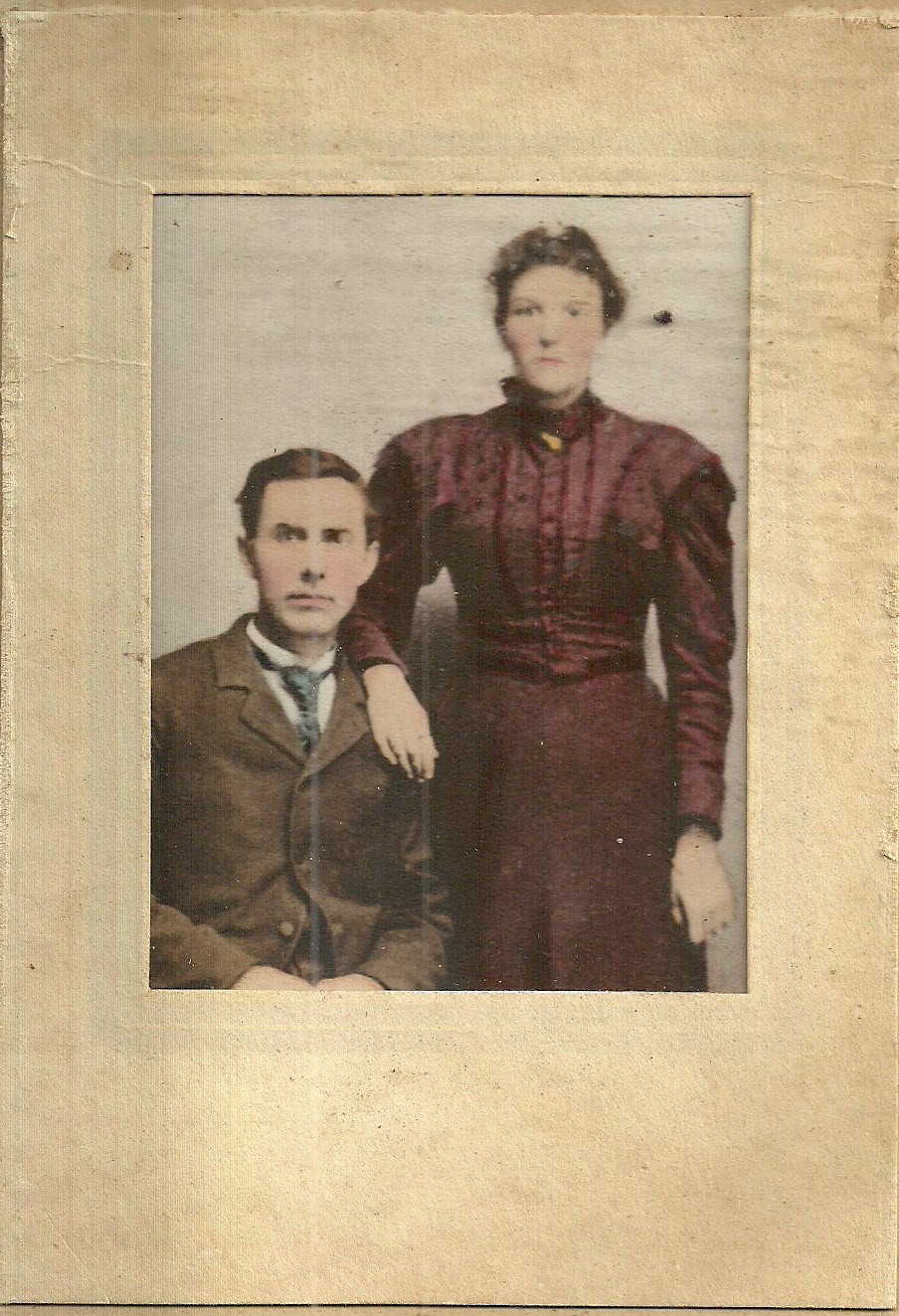 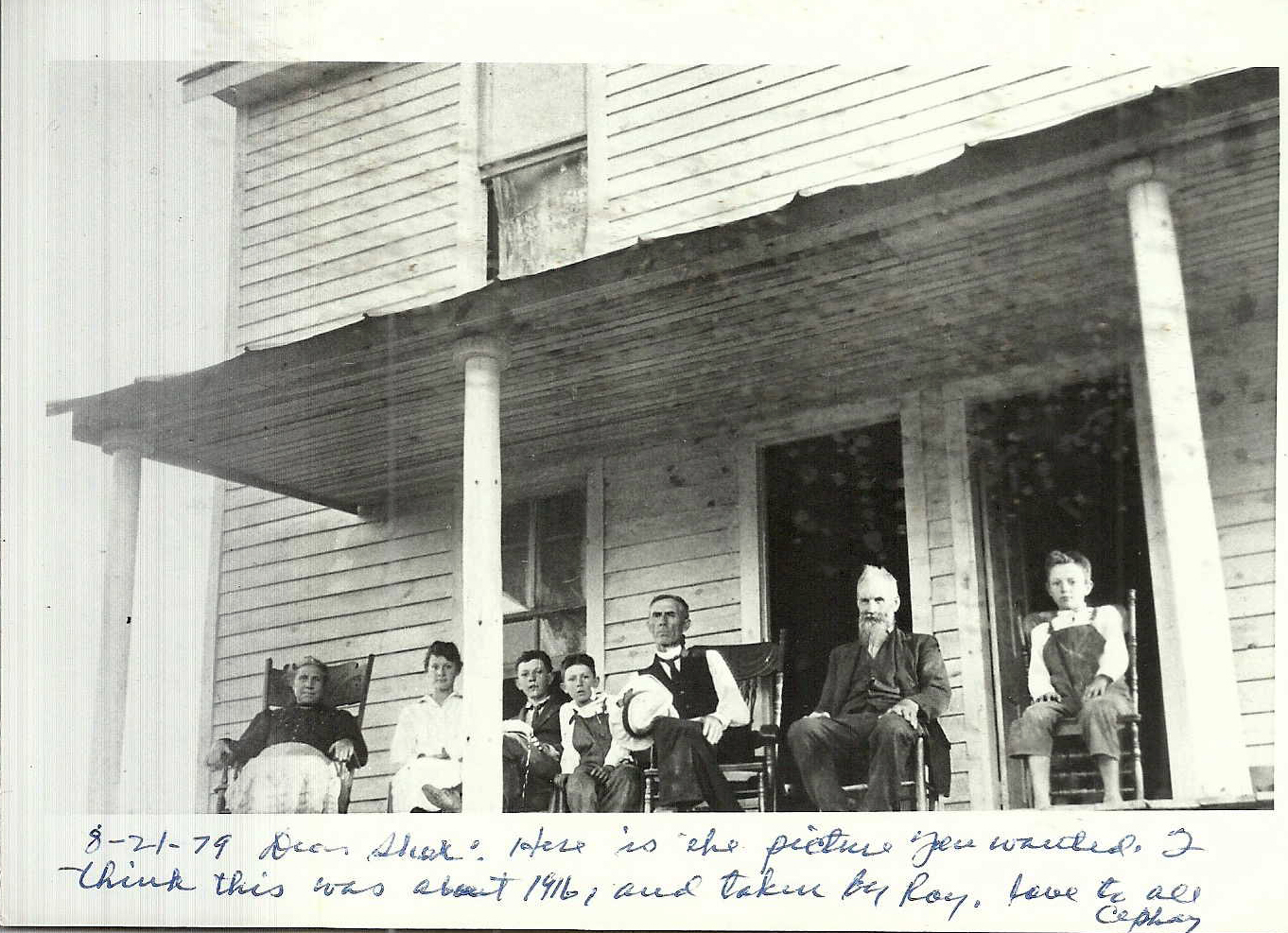 Dear Shox: Here is the picture you wanted. I think this was about 1916, and taken by Roy.
Love to all, Cephas
Source: Ancestry.com 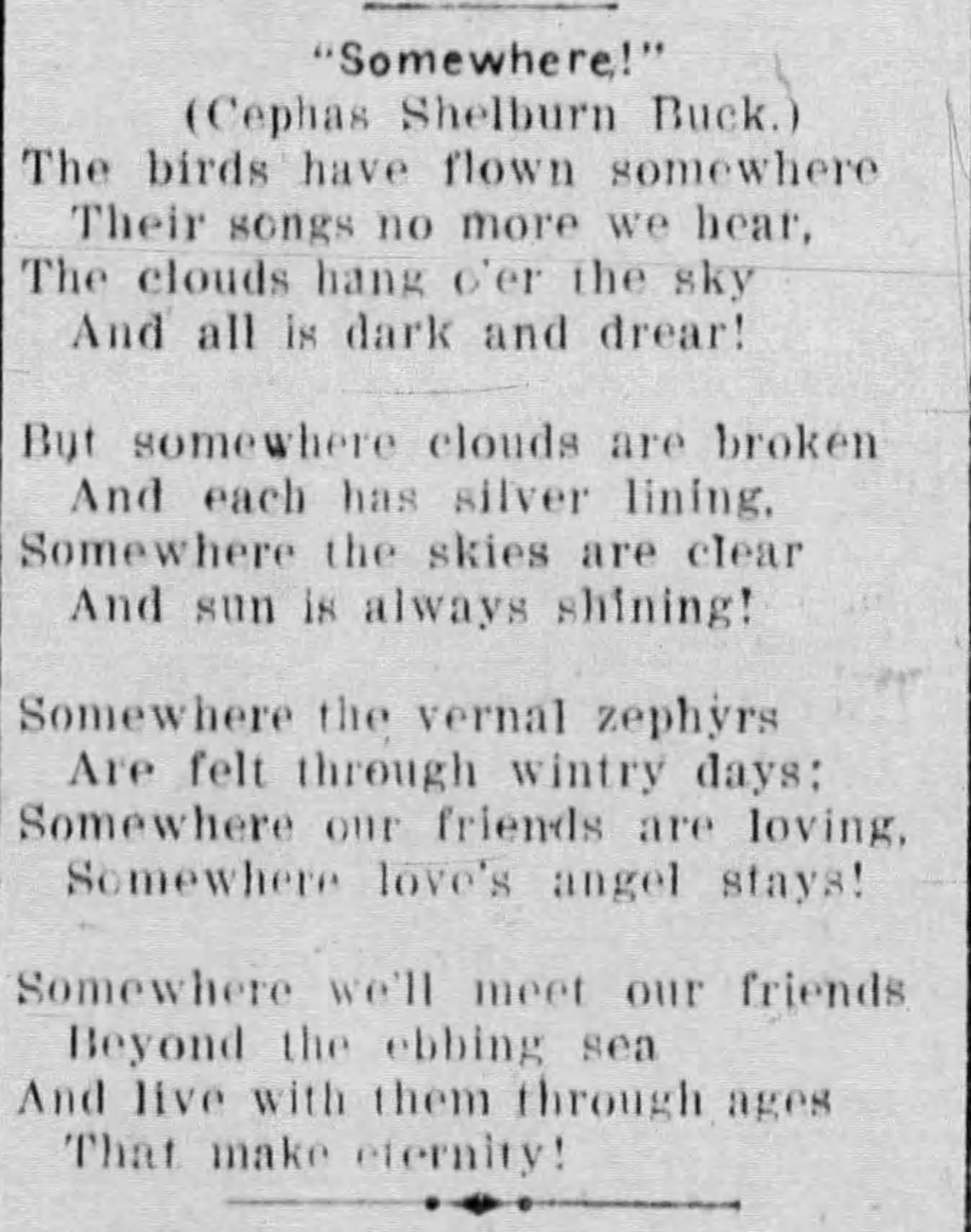 In southern Virginia, head to Abingdon, and head west on US-19 N/US-58 ALT W for about 7.8 miles and turn right on Brumley Gap Rd. Go about 4.1 miles and the Buck Cemetery will be on your left at the corner of Bryson Cove Rd. and Brumley Gap Rd. 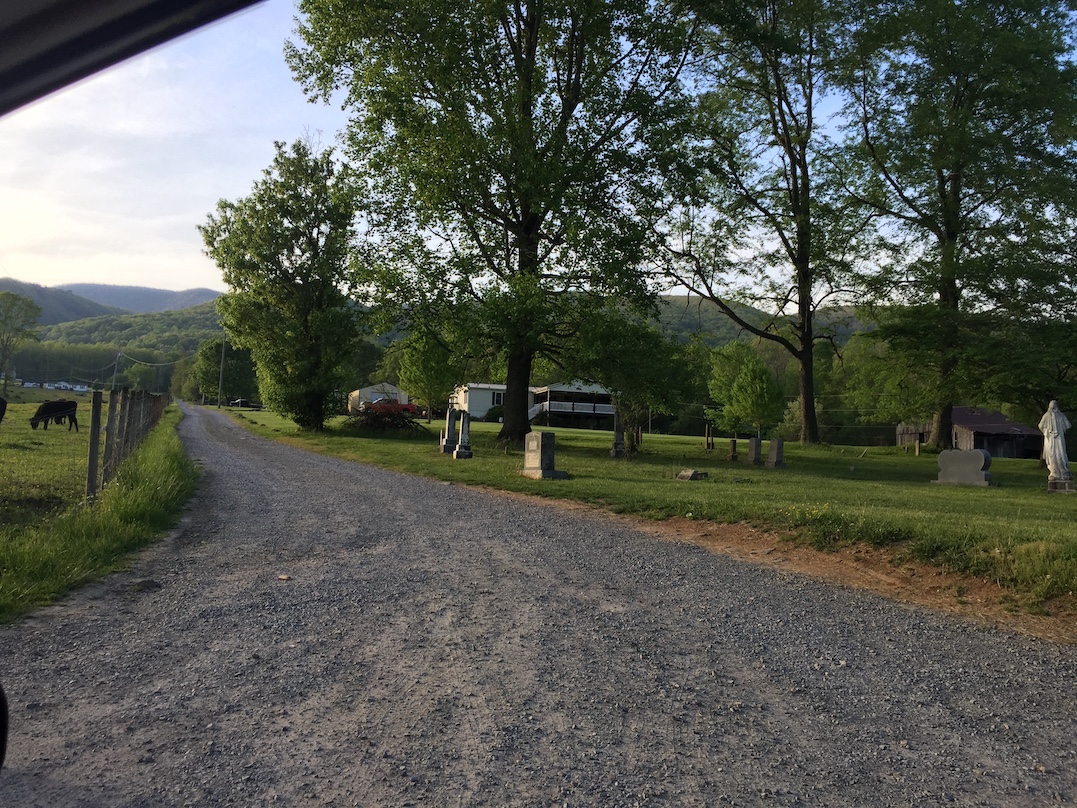 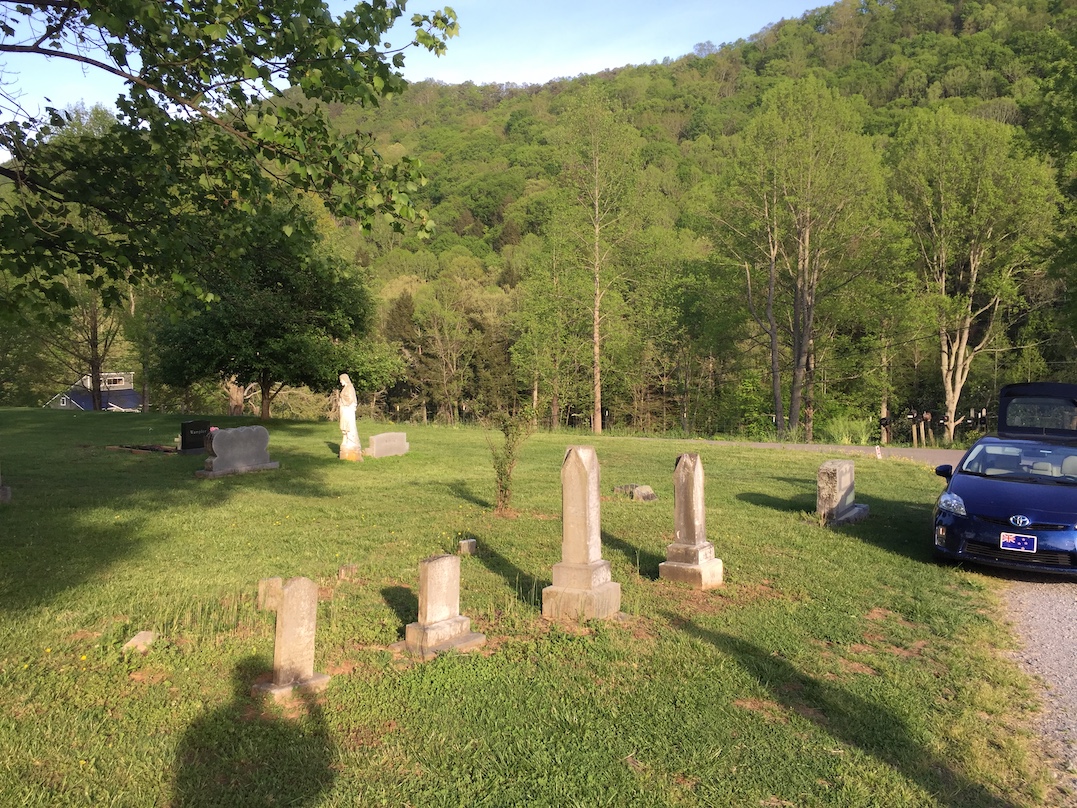 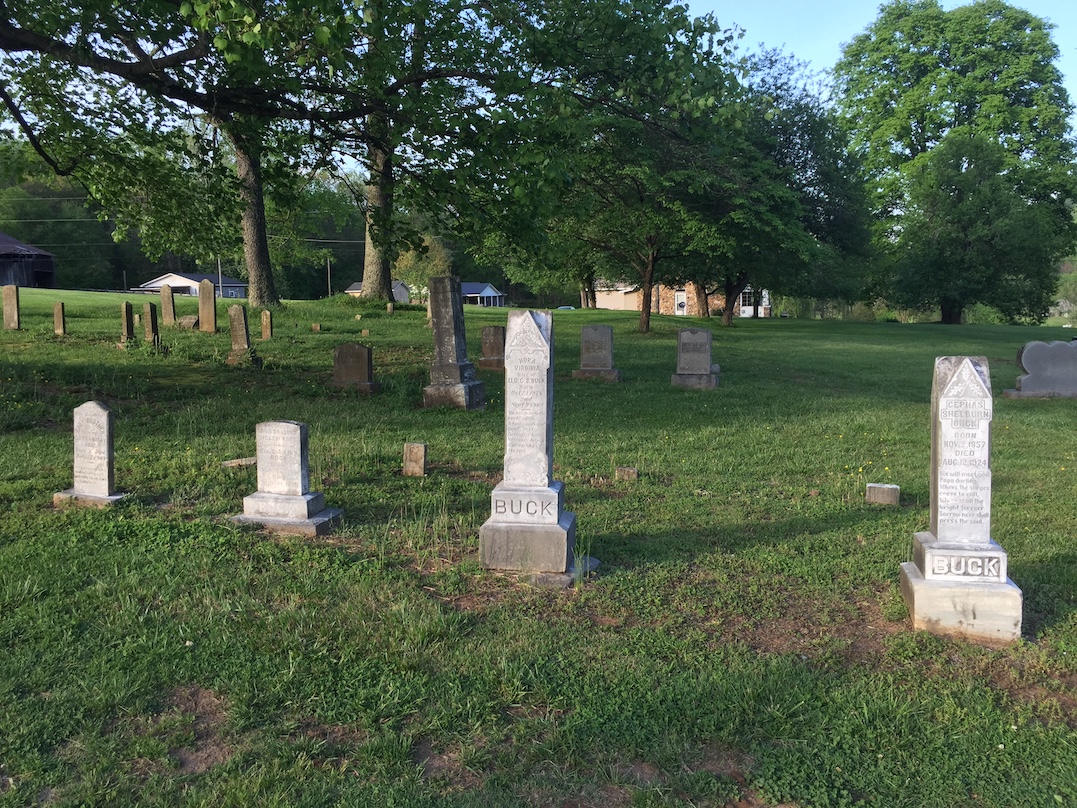 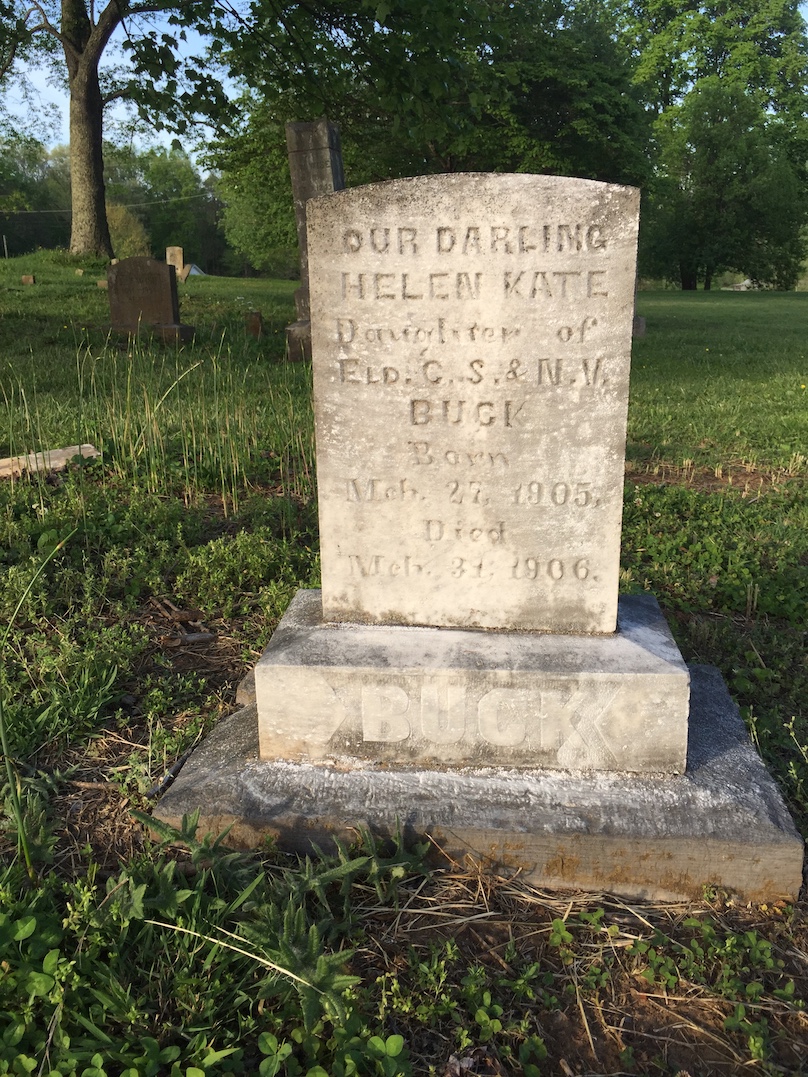 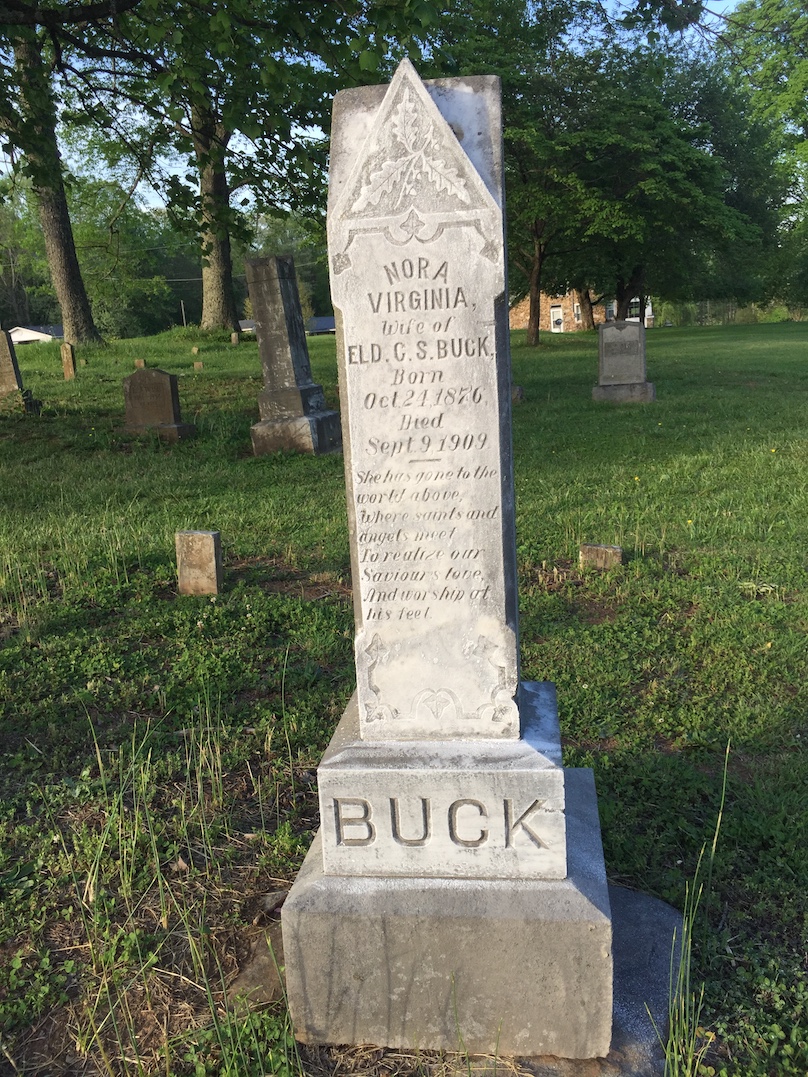 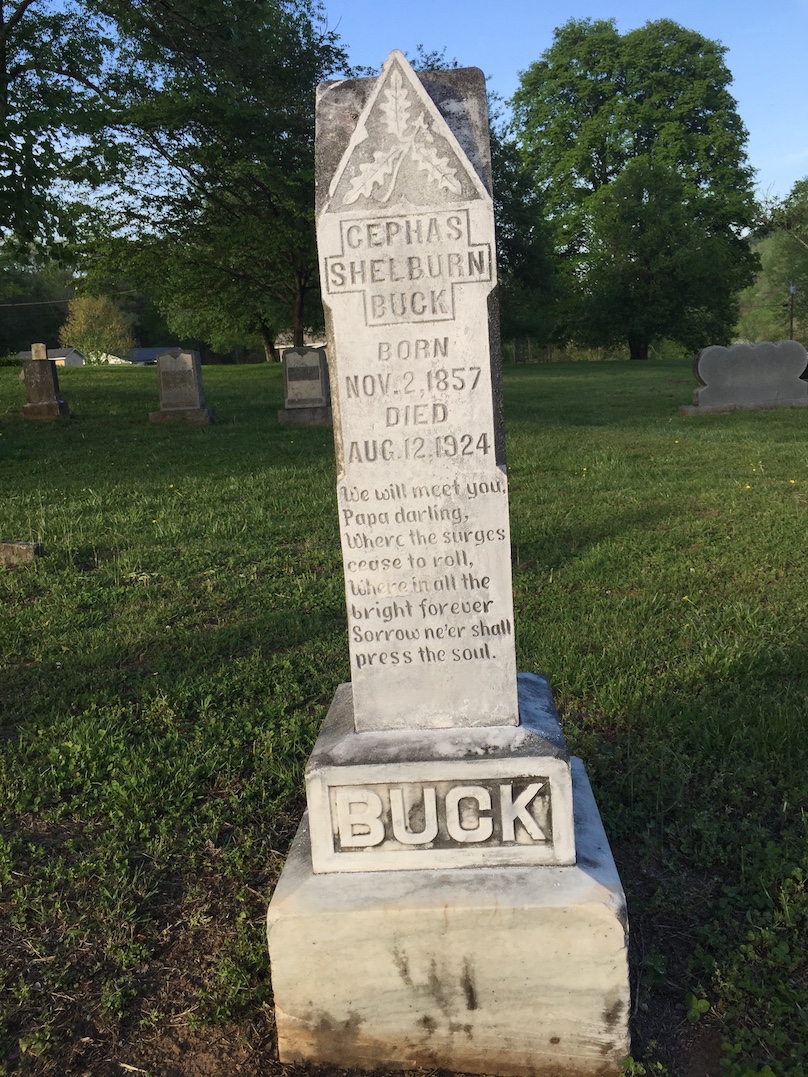 Cephas Shelburn Buck
Born: November 2, 1857
Died August 12, 1924
We will meet you
Papa darling,
Where the surges cease to call
Where in all the bright forever
Sorrow ne'er shall press the soul.
BUCK

In April, 2019, I had the privilege to speak on the lectureship program of Southeast Institute of Biblical Studies, held at the Karns church of Christ in Knoxville, Tennessee. Along with me was long time friend and fellow laborer in restoration research, C. Wayne Kilpatrick. After we both completed our responsiblies at SEIBS, we made our way into southern Virginia where we sought the burial places of several leaders in the Restoration Movement in that area. Special thanks are extended to Wayne for his help in finding some of these graves.