William Henry Hulett was born September 9, 1859, in the Blue Ridge Mountains of West Virginia. His father, a Confederate soldier in the Civil War, died just after the close of the war. His mother, Jane Byrd Hulett, was left with three small children, two boys and a girl.

When her brother Bill Byrd resolved to move to Howell county Missouri, she decided to move with him and he could help her rear the children. The two families spent 1869 in Howell county and migrated to Sharp county, Arkansas and settled near Center in 1870. This area has been home to the Huletts and their descendants ever since.

Uncle Dick Bland reared a large family in the same community. Sometime around 1880, Brother E. N. George, of Izard county, a great and grand preacher of the faith whose work blazed a trail deep and wide across North Arkansas, came to Center and established the church there. During this meeting Brother George succeeded in baptizing the Byrd family, the Hulett family, and the Bland family. Prior to their conversion the families had been Baptists. All now became strong supporters of the truth and their descendents are strong church leaders and workers today.

The church Brother George left became a radiating center of Christianity and continued its strength for a half century until, missed by highways, the population dwindled. This does not mean that the church is not still strong in the area. Three congregations Center, Bettistown, and Flatwoods still meet within a circle whose diameter is no more than four miles. The numerical strength has diminished though spiritual strength still is great.

William Henry Hulett was married to Miss Alamada Bland in 1883. Somehow they lost identity with their real given names and affectionately were known far and wide as "Hince" and "Dink" Hulett. The nicknames are still used when reference is made to them.

Hince's cousin John Byrd was the first of the new converts to preach. Hince soon followed suit. There was an old log church house about half way between Center and Ashflat known as the old Bethlehem Church. The building was used by both the Baptist and members of the Church of Christ. It was here that Hince Hulett began teaching Bible classes and preaching. The truth makes enemies and the Baptists got jealous and nailed up the door to the house. Uncle Carol Medlock broke the lock, tore open the door, went on in and held services. This all took place in the mid 1880's soon after Hince and Dink were married.

Before long the church gave up meeting in tile old Bethlehem church building and went to Center to meet.

Hince Hulett converted the parents of Brother Lacy Holt whose story is elsewhere told. Ellen King Holt was the first of the two to come up and demand baptism. This infuriated her husband Louis Holt. After arrangements were made for the baptism at the creek, Louis told Hince that he would be on the bank with a gun to shoot Hince when he baptized Ellen. Ellen and Brother Hulett went ahead. Brother Hulett posted "Pink" Hamilton to watch while he baptized Ellen. Louis was a "no show" and one month later Hince baptized Louis into Christ. The Holt's soon were strong in the faith. One of their sons became the illustrious Lacy L. Holt. Lacy's daughter Naomi, grandaughter of Louis and Ellen is the wife of Waymon D. Miller and Authur, Lacy's brother, has four sons who are church workers, two of whom are preachers today.

Hince soon was a prominent preacher and preached at Evening Shade, Center, Strawberry, Poughkeepsie, Bettistown, and neighboring congregations. He preached regularly at the Macedonia church in Sharp county for years. He preached somewhere every Lord's Day.

Brother Hulett conducted many meetings and baptized lots of people. He held several meetings at Strawberry and had a peculiar talent of exhortation. His demeanor was smooth and calm and demanded that people consider the welfare of their souls. When internal "church trouble" arose at Strawberry around 1895 it was Hince who was called and who acted as a compromiser between brethren and who calmed the troubled waters.

To illustrate Brother Hulett's power as an exhorter, Brother J.H. Curry was holding a meeting sometime in 1902 or 1903 at Farmer's school house near Williford, Arkansas. The meeting was nearing its close and Brother Curry, as he could, had ably presented Christ's gospel, but there had been no responses. After services Brother Hulett got up and made exhortation. Seven came forward and were baptized. The same thing happened at Macedonia, near Poughkeepsie in one of Brother Alexander Douglas's meetings there.

About the same time, a Brother Henry Wiggs who lived at Center went down to Swifton in the bottoms and preached. He sent for Hince to come down and hold a meeting. Hince captivated the hearts of the brethren at Swifton, particularly Uncle Dan Nicholson, one of the elders. Hince sold Brother Nicholson a pair of young mule colts on credit. Of course, they were paid for as agreed and the Nicholson's used the mules for more than twenty ye.ars.

Only one debate crowned Brother Hulett's work. It was in Missouri and was with a digressive brother. Another crown was serving the church at Center as elder. Probably his greatest crowning accomplishment was leaving his family keenly and strongly planted in the Kingdom of Christ, and leaving sons who serve as elders and are great warriors in Jesus' army.

His death was untimely and overtook him when only 44 years of age. He died March 12, 1904. Services were conducted on the front porch of his home by Brother Alexander Douglas and burial was in Barnes cemetery. 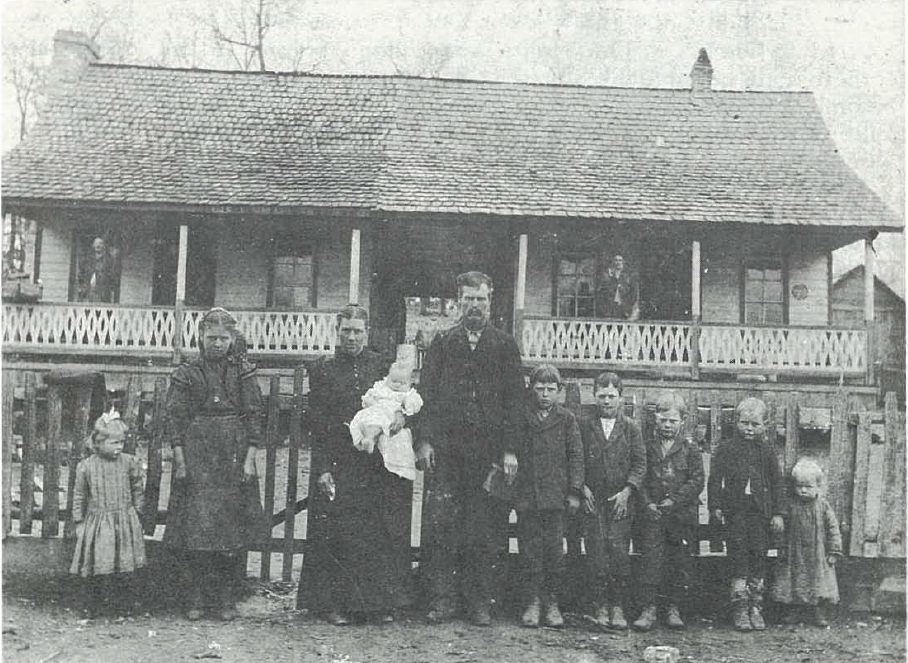 Directions To The Grave of W.H. Hulett

The Hulett family plot is located in the Barnes Cemetery in a very rural part of Northern Arkansas. From Little Rock, head north on Hwy. 167. Continue through Bald Knob, north on Hwy. 167, through Batesville. At the little village of Evening Shade head east (right) on County Road 56. Turn left on Barnes Road. (Gravel) You will go two miles, around sharp turns until you finally arive at Barnes Cemetery. Head into the gate, and make your way to the rear of the cemetery to the Hulett family plot. 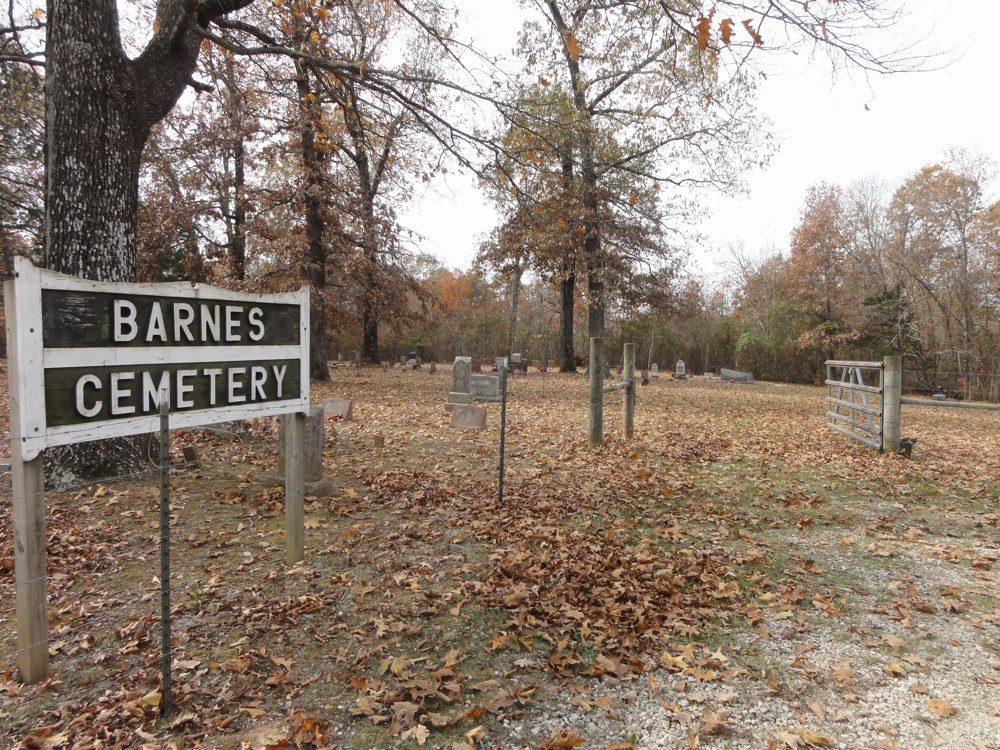 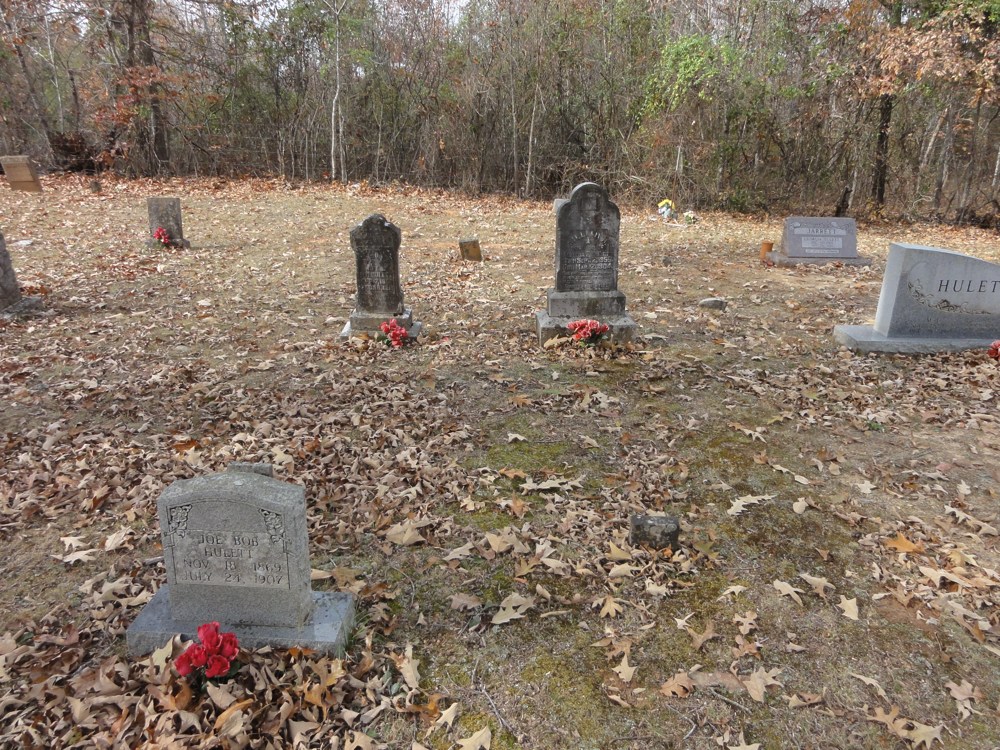 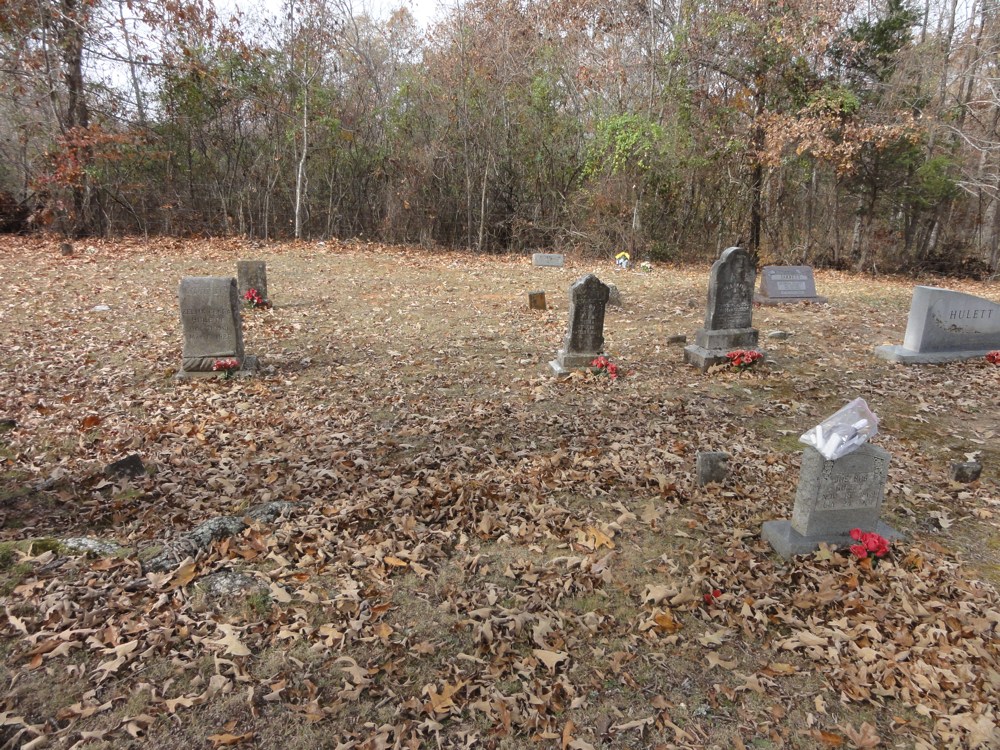 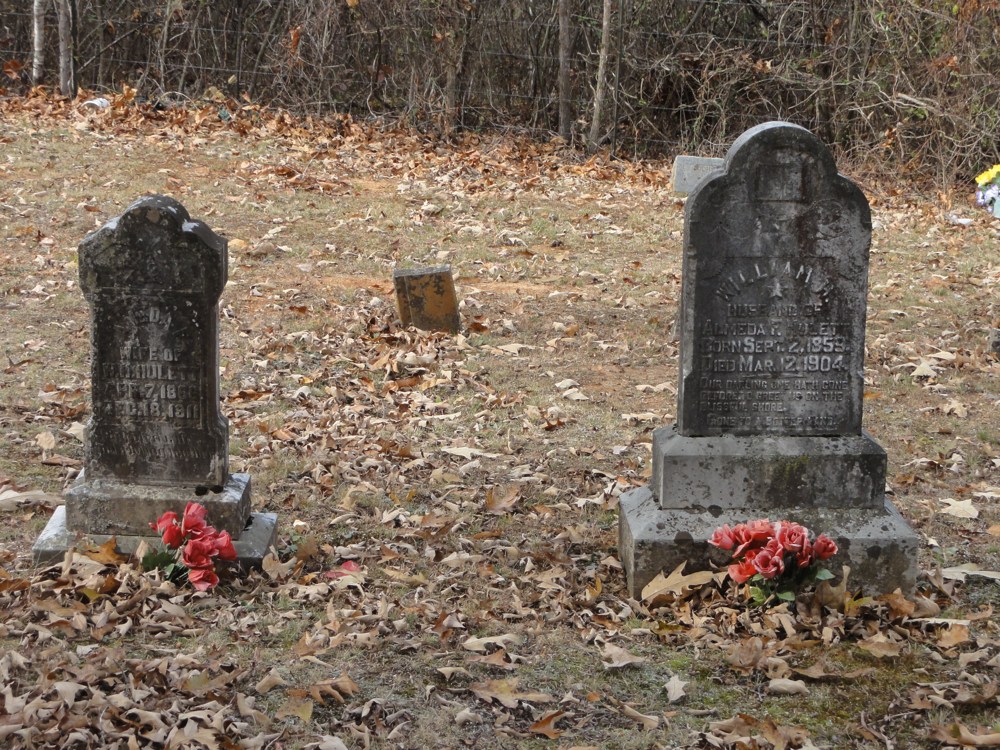 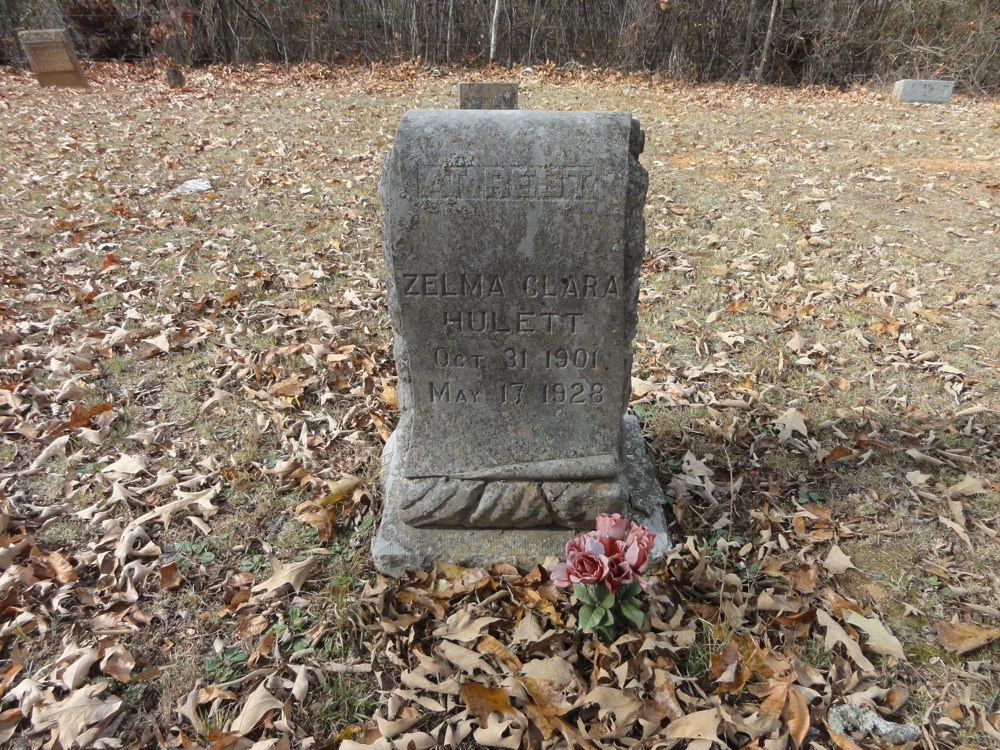 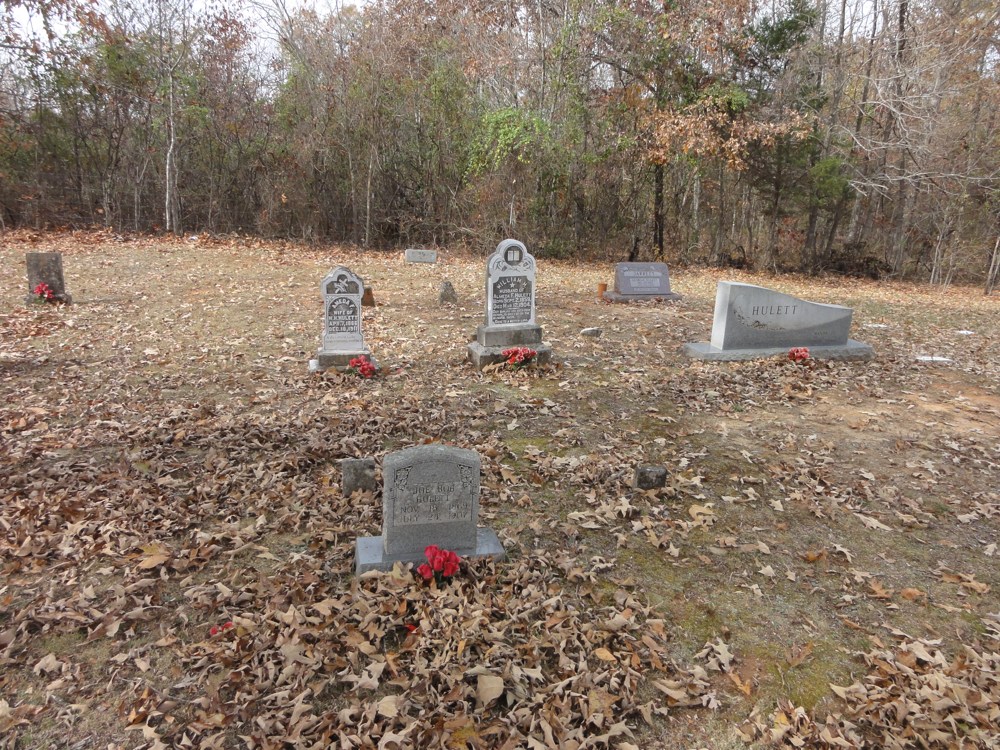 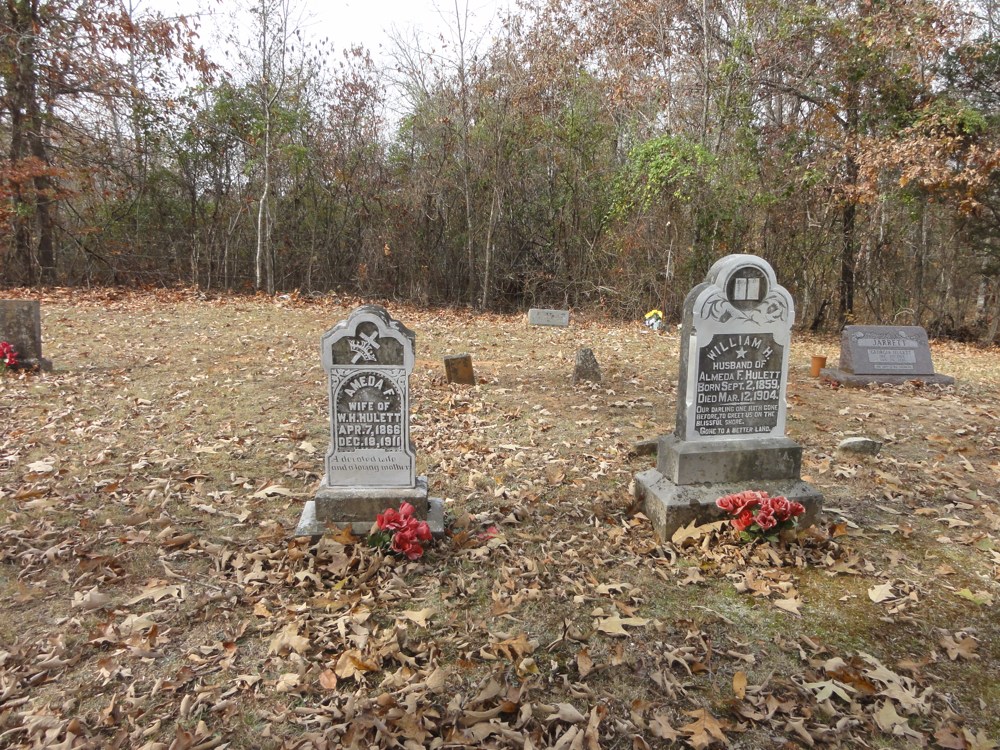 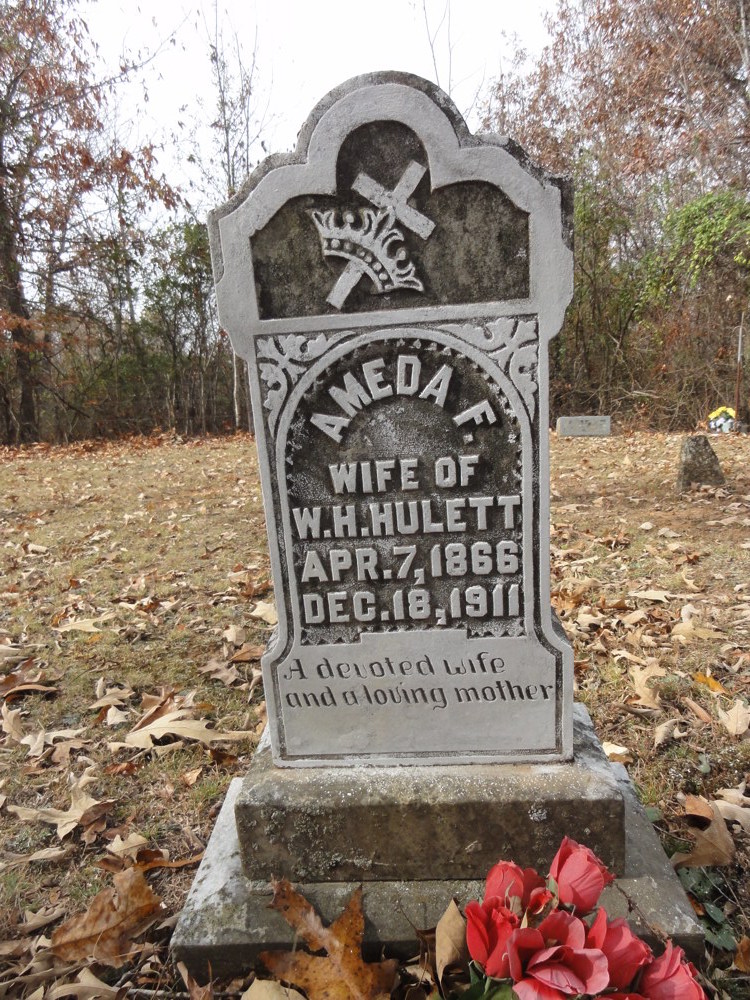 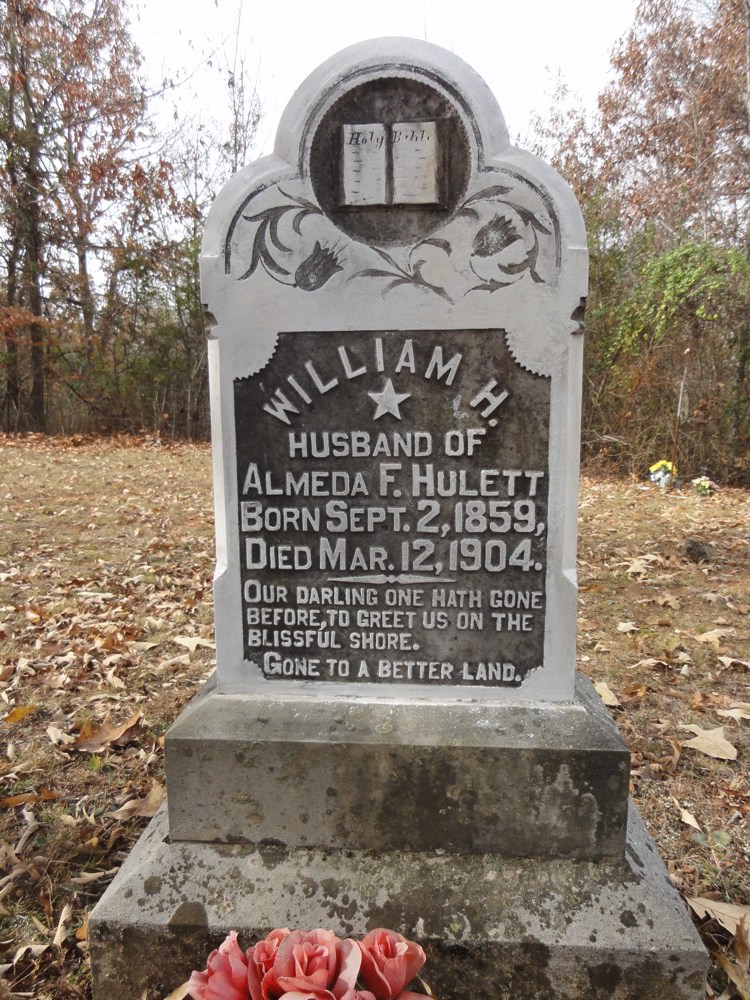 William H.
Husband of
Almeda F. Hulett
Born September 2, 1859,
Died March 12, 1904
Our darling one hath gone
before, to greet us on the
blissful shore.
Gone To A Better Land. 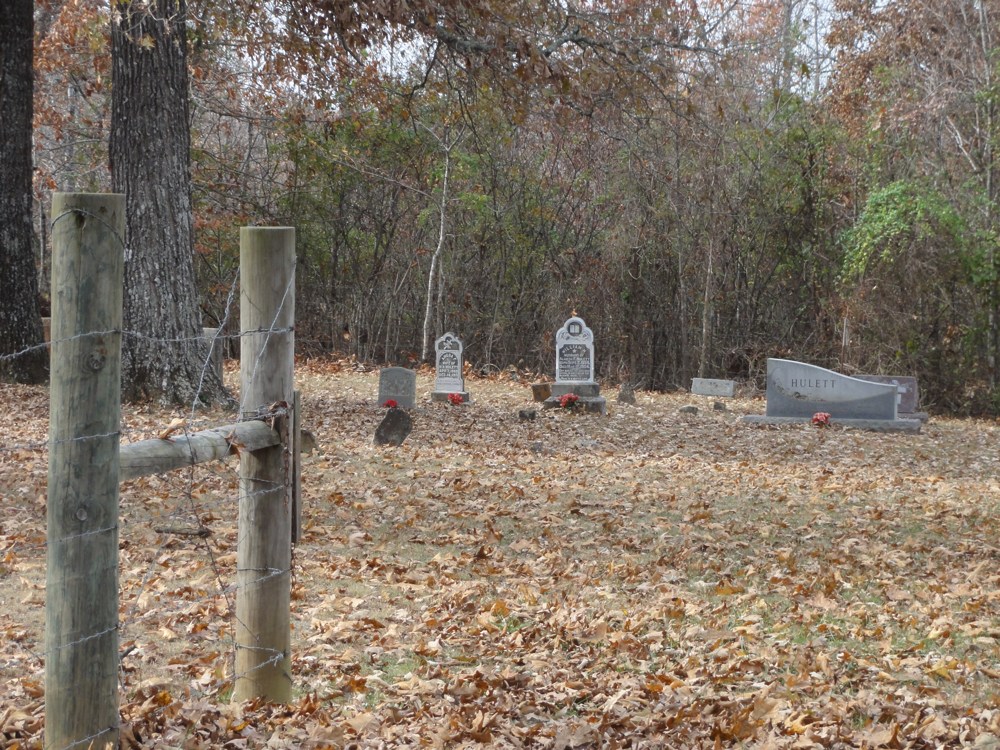