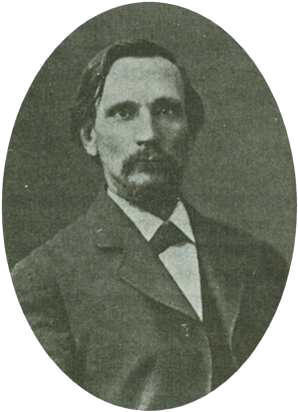 I.B. Grubbs was the 3x great grandson of Daniel Boone. His daughter, Lula, was the wife of another well-known educator and minister, George A. Klingman. Grubbs was a Christian who greatly served the Lord in education. He preached as well as taught in the College Of The Bible during the days of Charles Louis Loos and J.W. McGarvey. Grubbs is best known today through his class notes on Romans that are reproduced generation after generation.

Below is a biographical sketch of his life and work from
Lexington Theological Seminary 1865-1965,

Four years younger than John W. McGarvey and eleven years younger than Robert Graham, Grubbs was, like them, an honor graduate of Bethany College ('57). Reared on a farm near Trenton, Kentucky, at the age of nineteen he entered the high school of Montgomery County, Tennessee, and also began to preach for both of which roles he had prepared himself by home study. He was pastor of churches at Paducah, Eminence, and Louisville. From 1864-1868 he taught at Flemingsburg (Kentucky) College. He came to Lexington from Louisville in 1876 to become managing editor of the Apostolic Times and was thus conveniently at hand for the beginning of the new College of the Bible a year later.

Evidence converges from many sides to indicate that Grubbs was the students' favorite teacher. They revered Graham, admired McGarvey, but they loved Grubbs."

By temperament he was keenly analytical and logical, but he was also enthusiastic and warmly personal. Physically he was frail and from about 1885 seemed to be walking on the edge of the grave. This caused students to take his courses early lest he should die before they graduated; this went on for twenty years."

Letters from several of his former students picture Grubbs at work in his teaching. Professor Grubbs had a mobile, expressive face which was always interesting to watch, especially when he was carried away by his enthusiasm for Paul's theology. At such times, "his statements were top flights of eloquence, worthy of any occasion." His dress was plain and seemed to go with his tousled hair, usually worn long. He was a wiry wisp of a man. Because of sinus difficulty he usually carried a large silk handkerchief in one hand. He sat at his desk in a swivel chair, which he was constantly turning. As he called on students, they came to the front of the room and stood at his desk to recite.

He had a playful spirit indicated by incidents like this: In a drowsy class one early afternoon a student fell asleep on a rear seat. Suddenly Professor Grubbs began shouting at the top of his voice: "Awake, O thou that sleepest, and arise from the dead, and Christ shall give thee light." After the first shock of surprise, and after seeing the sleeper leap to life, the students roared with laughter. Then the professor gave biblical chapter and verse for his quotation, used in such an unorthodox manner. (It was Ephesians 5:14.)

His Specialty Was Exegesis Of Paul's Letters.

He loved the most abstruse, theological phases of the Apostle's thinking. His interest was in Paul, the theologian. Of the Apostle as a great mystic, the great moralist, or even the great, practical, organizing genius, the missionary, he had little concern. It is doubtful whether these phases of the Apostle's life were acutely present to his mind. But for Paul's doctrines, especially that of justification by Faith and the relation of the Law to the Gospel, he had great enthusiasm.

There were times when his shrill tones could be heard out on the campus. At such times someone was apt to remark, "Professor Grubbs must be lecturing on the seventh chapter of Romans."

Much is known about what and how Professor Grubbs taught; he wrote his own textbooks: one for church history, one for hermeneutics and exegesis, and one for Romans. For Biblical Theology, he used Robert Milligan's The Scheme of Redemption.

The professor's lectures in church history were all given in one semester. This reflected the slight attention commonly given in earlier days by Disciples of Christ to the history of the church between the Apostolic Age and their own movement in the nineteenth century. In 1893 Grubbs prepared his lectures in printed form under the title Manual of Church History. The book was a light survey of the first fifteen or sixteen centuries of the church, five chapters, 116 pages. Nearly one half of the book was devoted to the third chapter, "History of Doctrine, Schism and Sects," an indication not only of the Disciple emphasis but also of his own theological interest.

A textbook in hermeneutics and exegesis was also published in 1893. It was his Exegetical Analysis of the Epistles. The first part of the book was a long preface containing a complete outline of hermeneutical principals. The rest of the book was given over to his analysis and interpretation of three Pauline Letters 1 and 2 Corinthians and Galatians!

By 1895 Grubbs's health had failed so seriously that the trustees relieved him of classes in Hebrew and Greek exegesis and homiletics. His offerings for the next ten years, therefore, included Christian doctrine, church polity, church history, hermeneutics and English exegesis. Poor health closed his teaching in 1905. He was placed on formal retirement in 1907. He died September 18, 1912, at the age of seventy-nine, after an invalidism lasting seven years.

The three men who constituted the faculty of The College of the Bible during its year of exile in the Main Street Christian Church led the return of the Seminary to the campus of Kentucky in the autumn of 1878. There they continued through the remaining years of the nineteenth century as "the Sacred Trio," symbol to the whole brotherhood of all that was best in The College of the Bible.

*Note to the non-theological reader: Exegesis is the minute study of a passage of Scripture to determine precisely the meaning or interpretation of the passage both for ancient and modern readers. Hermeneutics has to do with the principles that guide such an interpretation. -From Lexington Theological Seminary 1865-1965, Dwight E. Stevenson, Bethany Press, pages 70-72. 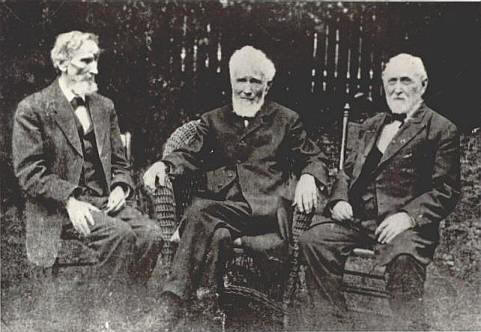 Directions To The Grave Of I.B. Grubbs

Directions To Grave: Lexington Cemetery is one of the most beautiful old cemeteries in America. It is located on West Main Street heading away from downtown Lexington toward Leestown Pike. Turn right into the main entrance past the office. Once inside the gates take the second turn to the left that leads up to the front of the Clay Monument. Then turn left onto West Main Avenue. Follow the road on around past Sections "D,H,O & P" Just past "P" on your right look back to your left and see the grave of I.B. Grubbs & Robert Milligan both of which are in Section T. 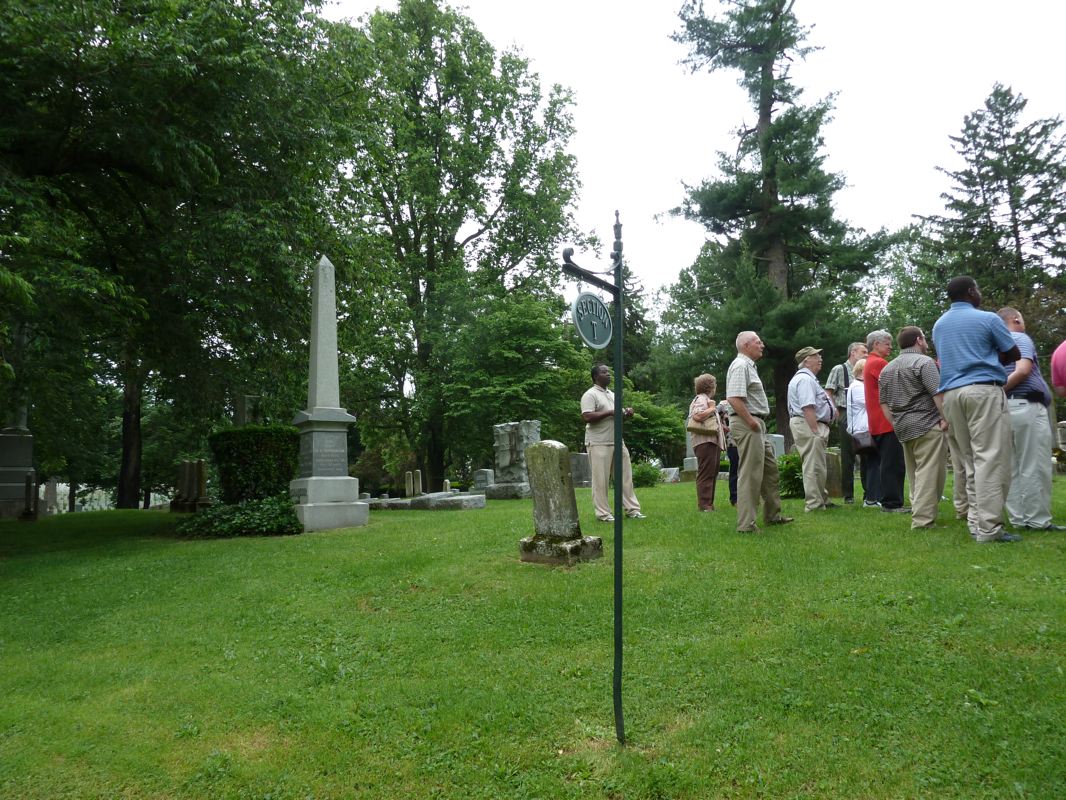 Preacher Students From East Tennessee School of Preaching At The Grave Of I.B. Grubbs, May, 2011 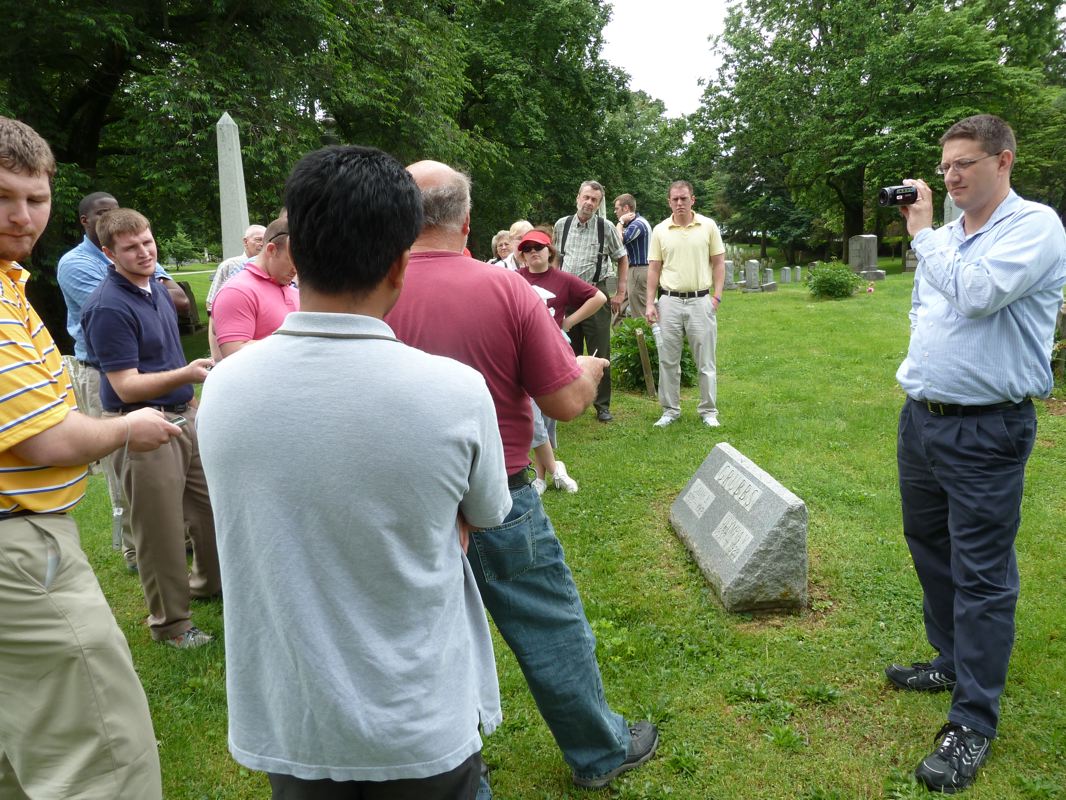 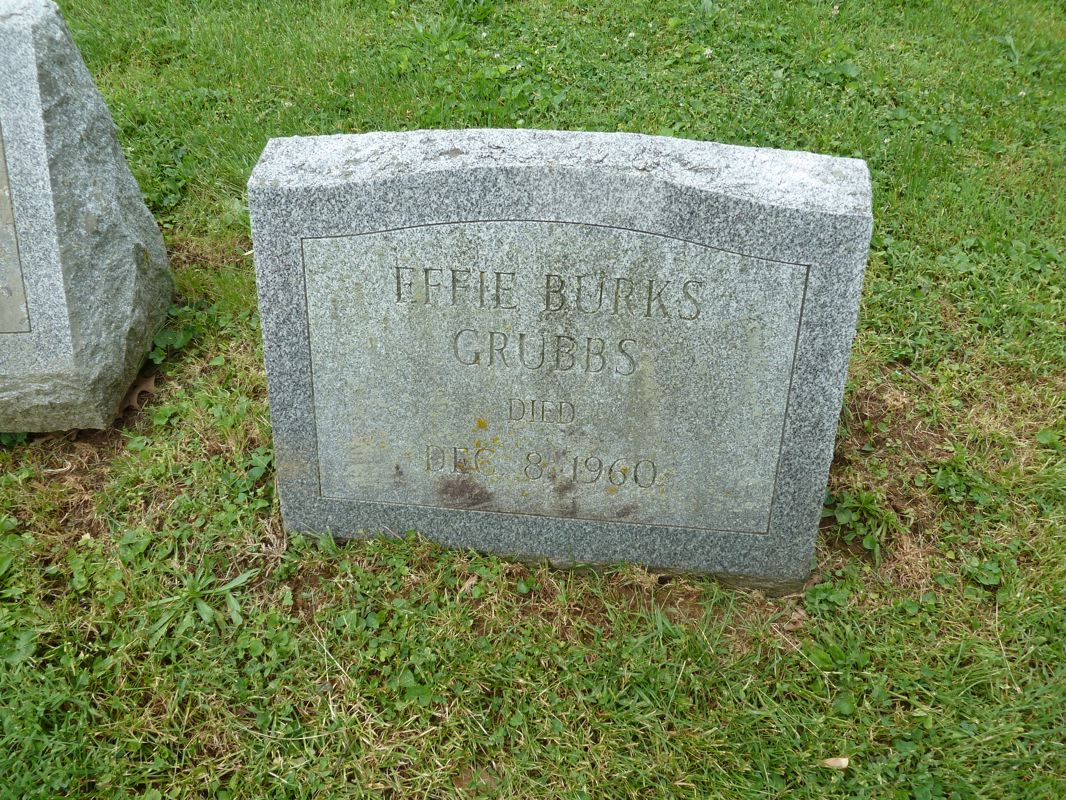 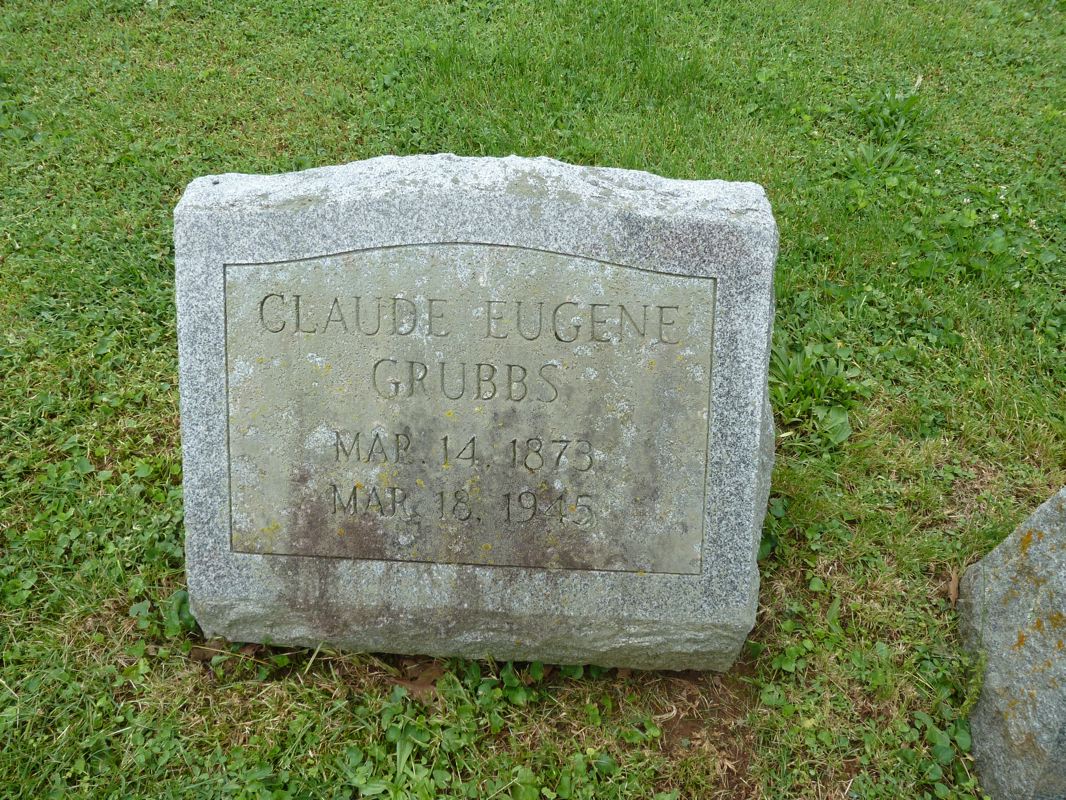 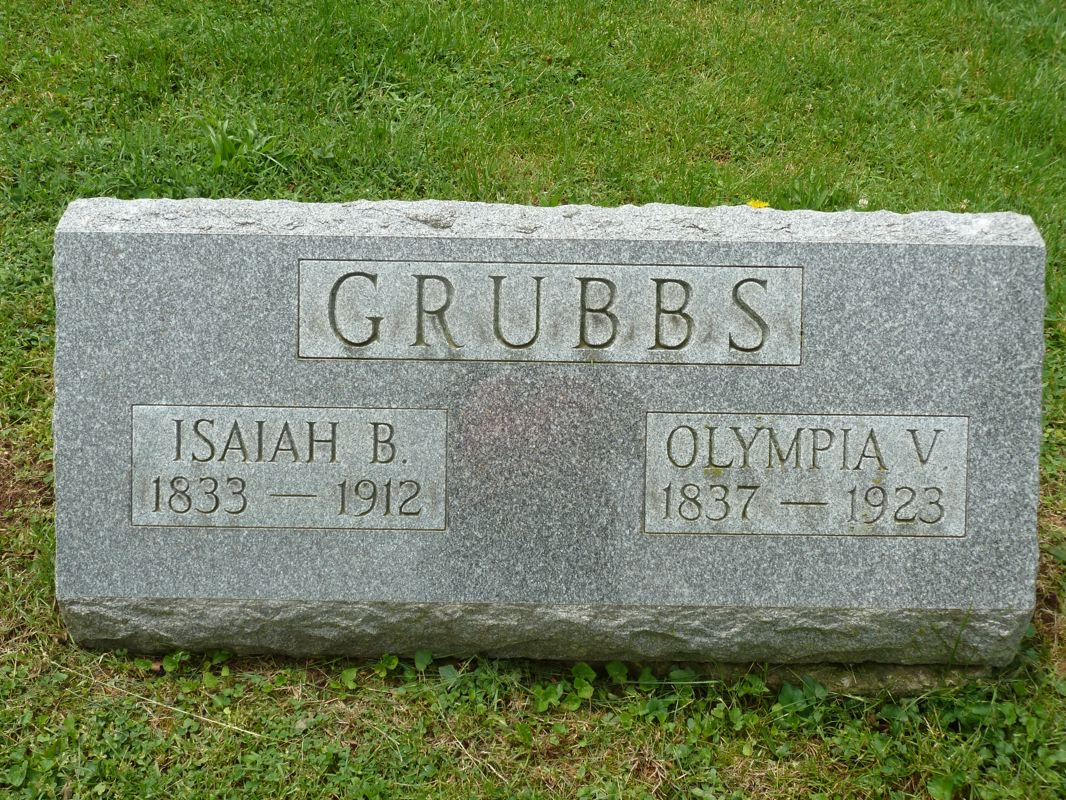