H.H. Halley was born in Kentucky in 1874. He was graduated from Transylvania University and the College of the Bible in 1895. In 1896 he taught in the preparatory department at Transylvania University. In 1897 he taught at Women's Missionary College in Hazel Green, KY. He was ordained to preach among the Disciples of Christ in 1898. The following year he moved to Michigan and began his preaching career.

The most noted contribution he made to society was the development of Halley's Bible Handbook. The story behind its production deserves telling. Sitting at the feet of J.W. McGarvey in the College of the Bible, Halley learned early on in his education to appreciate the study and understanding of the Bible. He made it his duty to commit the scriptures to memory. Hours and hours were set aside to learn the Word that it might be rehearsed at a moment's notice. Some have suggested that at any one time Henry H. Halley could quote in excess of no less than 25 continuous hours worth of Scripture without looking at a reference.

His memory skills paid off after about 20 years into his ministry. It happened on an occasion in the early 1920s that he was visiting a church and was planning to speak for them. Generally his preparation of sermons involved the preparation of meticulous notes that he would carry with him into the pulpit. However, on this occasion he accidentally left his notes at home. He did not notice they were missing until he went into the pulpit. As he needed to rely on the notes for his points, he was quickly troubled as to what to do next. He decided to quote some scriptures. So, for the rest of his time in the pulpit he quoted scripture. The response was overwhelming. People were amazed at his skills. Very soon he was in high demand among churches to have him come and preach the scriptures.

Halley loved to learn not only the content of the Bible, but everything about the Bible. He studied the backgrounds of biblical texts. Among the many books he studied, McGarvey's Lands of the Bible and J.T. Barclay's City Of The Great King would have been prized possessions in his library, as he would study the geography of the Bible lands. Dates of writing, authorship and other historical information on Bible books were a great help to him. When he would preach a lesson in Scripture he would reveal the historical background and contextual information in the sermon before quoting the scriptures. People began asking him for some of this information. On one occasion a court stenographer was called in for one of his lessons so that every detail of introductory information could be recorded. She placed herself on the front seat, just in front of him. As he began his lesson, she began typing. The shuffling of paper and the noise of the machine was so distracting to his effort that he decided to go home and write his own introductory material and make it available.

In 1924 he produced a sixteen page booklet of introductory information and began giving it out to people who wanted it. In time the paper grew into a small volume. He began calling it Halley's Pocket Bible Handbook. Before long Pocket was dropped from the name as the volume was too large for a shirt pocket. Eventually the volume would become an 800 page handbook that is now known as Halley's Bible Handbook. Today this little volume is made available with the New International Version of the Bible as a study Bible. It has been translated into foreign languages, and is still one of the top selling Bible Handbooks on the market. In 1961 Henry Halley received the Gutenberg Award from the Chicago Bible Society for this wonderful guide to Bible Study.

Henry H. Halley passed from this life in 1965. He was buried in the beautiful cemetery at Lexington, Kentucky. Very close to his grave are the graves of some of his heroes of the past, "Raccoon" John Smith, L.L Pinkerton & John T. Johnson.

-Sources for this sketch include gleanings for various sources including an online interview with his great granddaughter, Patricia Wicker, president of Halley's Bible Handbook, Inc. See this interview here.

Directions To The Grave Of Dr. Henry Hampton Halley

Lexington Cemetery is one of the most beautiful old cemeteries in America. It is located on West Main Street heading away from downtown Lexington toward Leestown Pike. Turn right into the main entrance past the office. Once inside the gates take the second turn to the left that leads up to the front of the Clay Monument. Then turn left onto West Main Avenue. Follow the road on around past Section "D & H" Then you will come to Section "O" Dr. Halley is buried in Section "O".

Note: While at Halley's grave be sure to see the graves of R.C. Ricketts, "Raccoon" John Smith, Lewis L. Pinkerton, John T. Johnson, I.B. Grubbs & Robert Milligan who are buried very near. 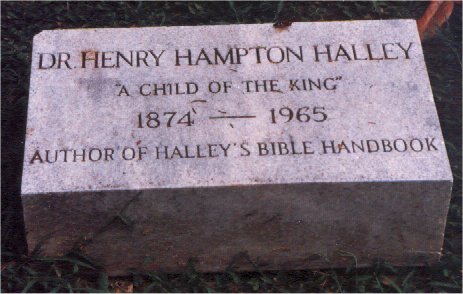 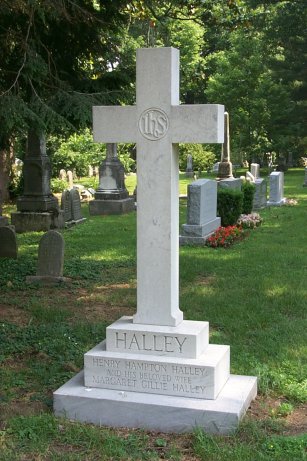