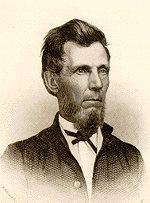 L.L. Pinkerton was born near Baltimore, Maryland, January 28, 1812. His paternal ancestors were Scotch-Irish. William and Elizabeth (Littig) Pinkerton, his parents, have given twelve preachers to the church, viz.: five sons - William, Lewis, Thomas, Samuel, and Elisha; six grandsons, John, Thomas, and William, sons of William; Burnet and James, sons of Lewis; and William, son of Thomas; and one great-grandson, James N. Crutcher, grandson of Lewis. Dr. Pinkerton passed his childhood and youth amid the scenes and ordinary experiences of farm life, in Chester County, PA., and Brook county, Va., near Bethany, most of the time being spent in "hard, incessant, ill-requited toil." His educational advantages were limited to an irregular attendance at country schools and one year's study at a Seminary. He had little time to read, and few books.

His father, being a Presbyterian, taught him the Catechism, and, while yet, in his teens, he read the New Testament in the light of Wesley's notes. Rejecting, however, the Calvinism of his father, and failing to "get religion at the mourner's beach," he, fortunately, at this time, became acquainted with the new plea for the Restoration of Primitive Christianity, and, in September, 1830, after hearing a sermon by Alexander Campbell, made the "good confession," and was by him immediately immersed.

In the fall of 1831 he left Virginia and settled at Trenton, Butler county, Ohio, where he spent four years, teaching school and studying medicine. There, on the 19th of March, 1833, he married Sarah A. Ball, with whom lived in faithful, holy love for forty-two years. Of this union nine children were born, seven of whom lived to maturity-William, Virginia, Burnet, James, Samuel, Lewis and Mary Belle. In 1835 Dr. Pinkerton began the practice of medicine. In August 1836, he removed to Carthage, a suburb of Cincinnati. He united with the church there, Walter Scott being their preacher, and was accustomed to speak in social meetings. At the urgent solicitation of David S. Burnet, Walter Scott and others, he gave up his profession, though his practice was already large and lucrative, and, in May, 1838, began to preach. In the fall of 1838, he made his first visit to Kentucky, spending several months evangelizing, in company with John T. Johnson and William Morton. In the spring and summer of 1839, he held meetings in Ohio and Indiana, laboring part of the time with John O'Kane and Love H. Jameson. In December, 1839, he moved permanently to Kentucky, settling in Jefferson County. At the meetings attended by him as subordinate or principal laborer, from 1838 to 1841, several thousands, it is believed, were immersed.

In the summer of 1840, Dr. Pinkerton became the preacher of the church at New Union, Woodford County, and in October, 1841, minister of the church in Lexington. During his ministry there, the church building on Main Street was built. He spent the spring and summer of 1844 in evangelizing and soliciting funds for Bacon College. In the fall of 1844, he removed to Midway, Woodford County, where he spent the next sixteen years. There, in 1845, he established Baconian Institute, a private school for girls, and there he originated, and, with the aid of James Ware Parrish, John T. Johnson, and others, founded the Female Orphan School. This was opened in October, 1849, and stands today, after fifty years of unsurpassed usefulness, a monument "more lasting than brass" to the wise philanthropy and consecrated zeal of this mighty man of God.

During his residence at Midway, Dr. Pinkerton preached at New Castle, Mt. Sterling, Versailles and Paris, new church buildings being built at the last two places during his ministry. In 1858, just as he was on the eve of removing to Paris to become minister of the church, the Orphan School building was burned. Changing his plan, he remained at Midway and spent the next two years in recovering that institution from its ashes. While living at Midway, he edited and published, in 1848, a monthly magazine, the Christian Mirror; in 1853 and 1854 he edited the Kentucky Department of the Christian Age; and, in 1854, The New Era, a temperance paper published in Lexington. In 1856 he was tendered the presidency of Eureka College, Eureka, Illinois, but declined the offer. In 1860, at the earnest solicitation of Regent John B. Bowman, he accepted the professorship of English in Kentucky University, then located at Harrodsburg. At the outbreak of the Civil War he espoused the cause of the Union, and, when General Bragg entered Kentucky in 1862, believing that college work would be temporarily, if not permanently suspended, he obtained an appointment as surgeon of the Eleventh Kentucky Calvary. In an effort to add the labors of a chaplain to his regular official duties, holding daily prayer meetings in his regiment, he soon broke down from overwork, suffering a serious attack of sun-stroke from the effects of which he never fully recovered. In 1865, on the removal of Kentucky University to Lexington, he moved to that city.

In January, 1866, he resigned his professorship, and in the same month, was appointed Agent for the Freedmen's Bureau in Fayette County. From February, 1866, to June, 1873, he was without regular employment, but spent much of the time in quiet, but most persistent and invaluable missionary work among blacks of Central Kentucky, visiting them in their homes and preaching in their churches. During the summer of 1867, he delivered a course of lectures in the Biblical Institute of Hiram College, and, at the close, was tendered the presidency of the College, but declined. Together with Prof. John Shackelford, he edited and published, in 1869 and 1870, The Independent Monthly. In June, 1873, he was appointed special mail agent by President Grant. While discharging the duties of this office, in October, 1874, he contracted the illness which, with a short respite about Christmas, held him firmly in its grasp until, on January 28, 1875, his sixty-third birthday, he closed his earthly course. The funeral services were held in the Main Street Church, Saturday, January 30., Elder R. C. Ricketts conducting the devotional exercises and Prof. Shackelford preaching the sermon, after which his body was laid to rest in the Lexington cemetery.

In the Biography of Dr. Pinkerton, by Prof. Shackelford, from which this sketch has been collated, President Garfield, among many other strong, discriminating words of eulogy, writes: "Dr. Pinkerton belonged to that small class of men whose characters are much more the result of inherent qualities than of external circumstances. He possessed an intellect of remarkable clearness and strength. In his religious opinions, two ideas possessed and controlled him; his strong conception of the ineffable majesty and justice of God, and his abiding trust in the condescension and love of Christ. He was a man of a most positive and intense nature; his opinions were convictions. In social life, in the sweet companionship of books and friends, his spirit shone with the gentle tenderness and sweetness of a woman's nature. I have seen but few men to whom children were so strongly attracted. In his nature as the rarest combination of independence, strength, courage, severity, gentleness, inflexible persistence, affectionate tenderness, sadness and mirth, I have ever known."

Thomas D. Butler, an intimate personal friend, says: "In the main current of his life, Dr. Pinkerton was one of the manliest, purest, most self-sacrificing, and, therefore, most Christ-like of men. His moral qualities were quick and sturdy, and, like Paul, he was immovably fixed for truth and righteousness. His humility was remarkable. While he looked up to no man, he never looked down upon any. He was the impartial friend of his fellow man."

Professor Shackelford, his biographer, and, for ten years his almost daily companion, says: "Force, courage, thought, sympathy, pride, humor, indignation, all found expression in his countenance. He had a powerful understanding, a marvelous memory, a most fertile imagination and a beautiful fancy, the soul and utterance of a poet, and his wit was indescribable. His practical and ardent sympathy with the poor and wretched was a leading trait in his character. The cry of distress was to him the call of God. He had great sympathy with women in all their peculiar trials and sorrows, and all little children loved him.

In his home life Dr. Pinkerton was a most charming man. There was between him and his children a beautiful confidence and a most tender friendship. An evening spent in his home was an event in the life of a stranger, and to old friends it was better than a king's feast. His approaches to God were wonderful. Leaning on Christ, he seemed to lead those who joined him in prayer and adoration to the very gate of heaven. I was with him much of the time for ten years, and it seemed to me that he fulfilled almost to the letter the divine injunction, 'Pray without ceasing.' He was a daily student of the Bible, especially of the four Gospels. In the pulpit his manners were grave and dignified, and his discourse natural and conversational. He was always instructive and searching, and frequently very eloquent.

In classical learning, in severe mental training, in that certain majesty and calmness of soul which give a man of genius rank among the great of earth, Mr. Campbell was superior to all the other preachers of the Restoration; but in familiarity with general literature, in that kind of learning which fits a man to deal worthily with great social and religious questions, in logical power, in moral courage, in fervid eloquence and manly Christian purpose, Dr. Pinkerton was the peer of even Mr. Campbell himself. His chief excellence, that without which all else were little worth was his profound piety, his abiding sense of God's presence and pity and love. In his dying moments he said: "I find greater and greater peace in the constancy of Christ's love - in the consolations of hope. As the end draws near the scene brightens, and the Lord Jesus becomes more and more precious." Almost his last audible words were, "My Saviour, my, Saviour, the Lord Jesus." 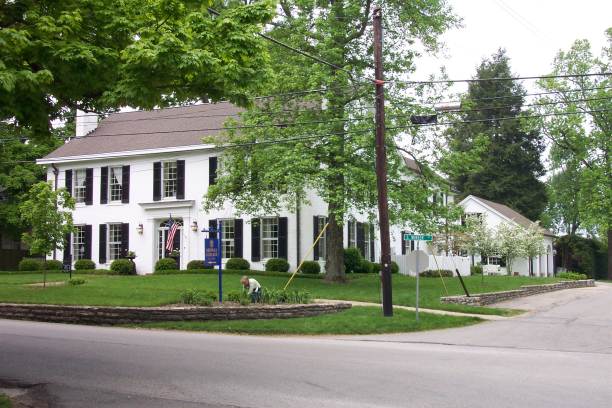 Home Of L.L. Pinkerton, Midway, Kentucky -
Located Back Toward Town From College, It Is Now Owned By Midway College

Directions To Grave: Lexington Cemetery is one of the most beautiful old cemeteries in America. It is located on West Main Street heading away from downtown Lexington toward Leestown Pike. Turn right into the main entrance past the office. Once inside the gates take the second turn to the left that leads up to the front of the Clay Monument. Then turn left onto West Main Avenue. Follow the road on around past Section "D & H" Then you will come to Section "O." Pinkerton is buried in Section "O" just before the grave of "Raccoon" John Smith. Also in this section are the graves of H. H. Halley, George W. Elley, and R. C. Ricketts. 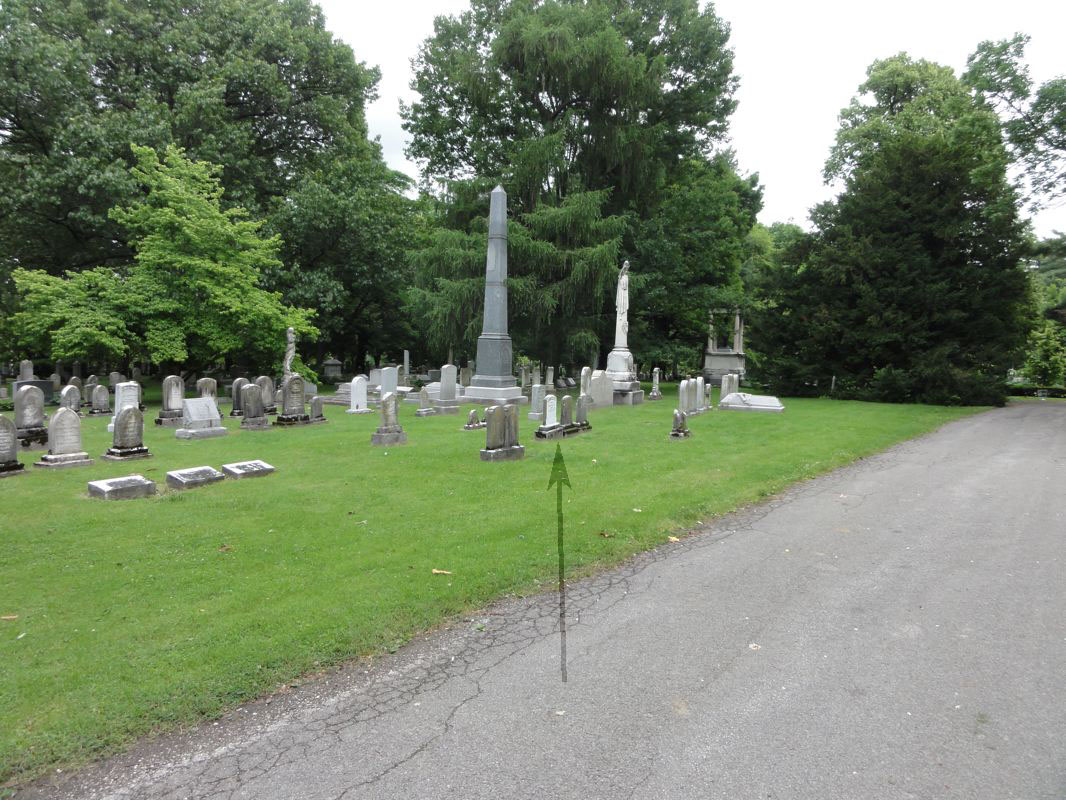 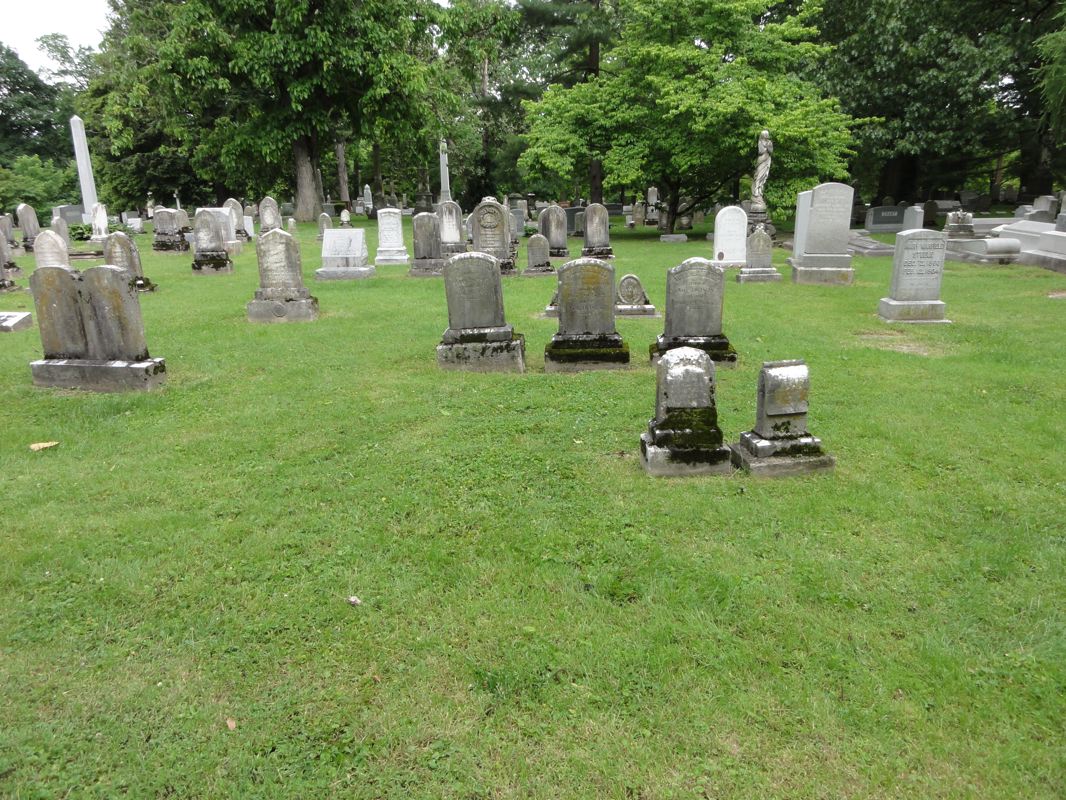 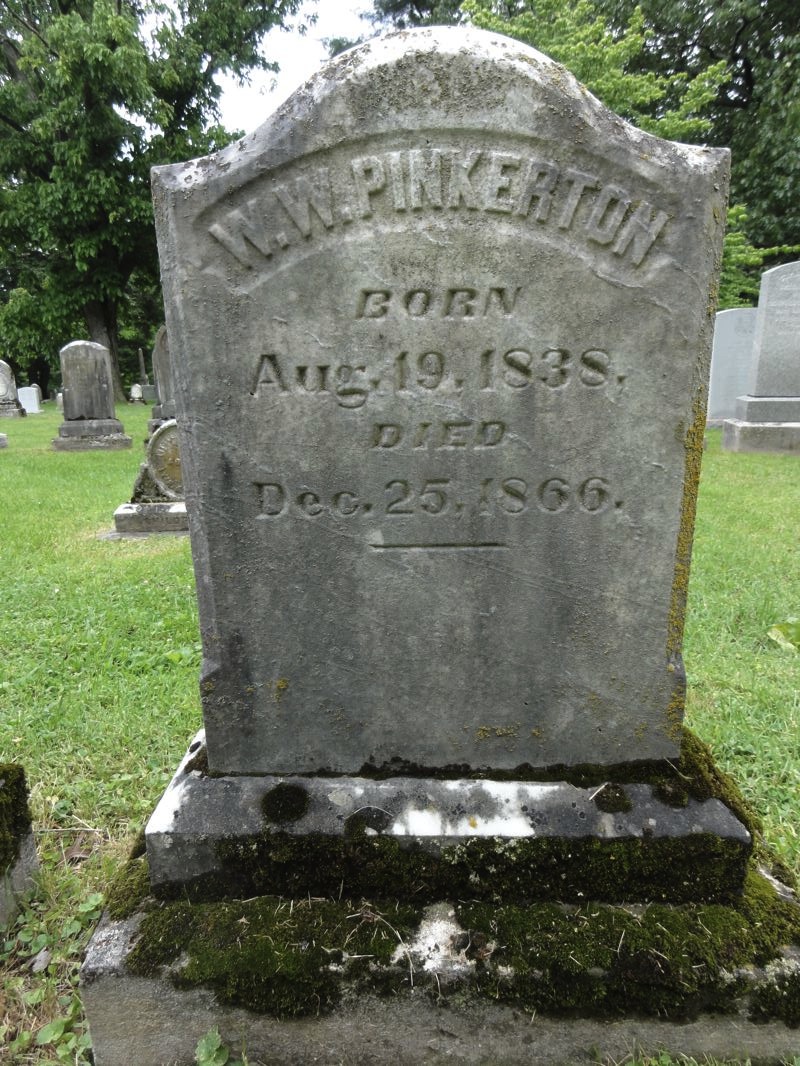 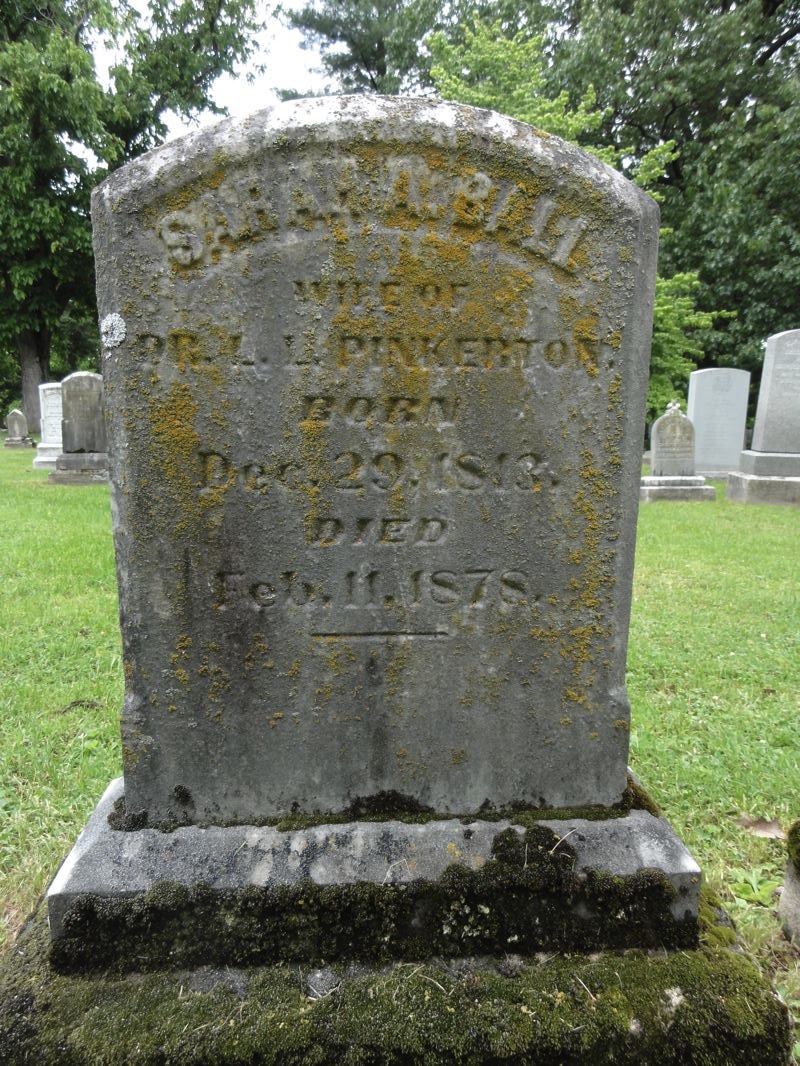 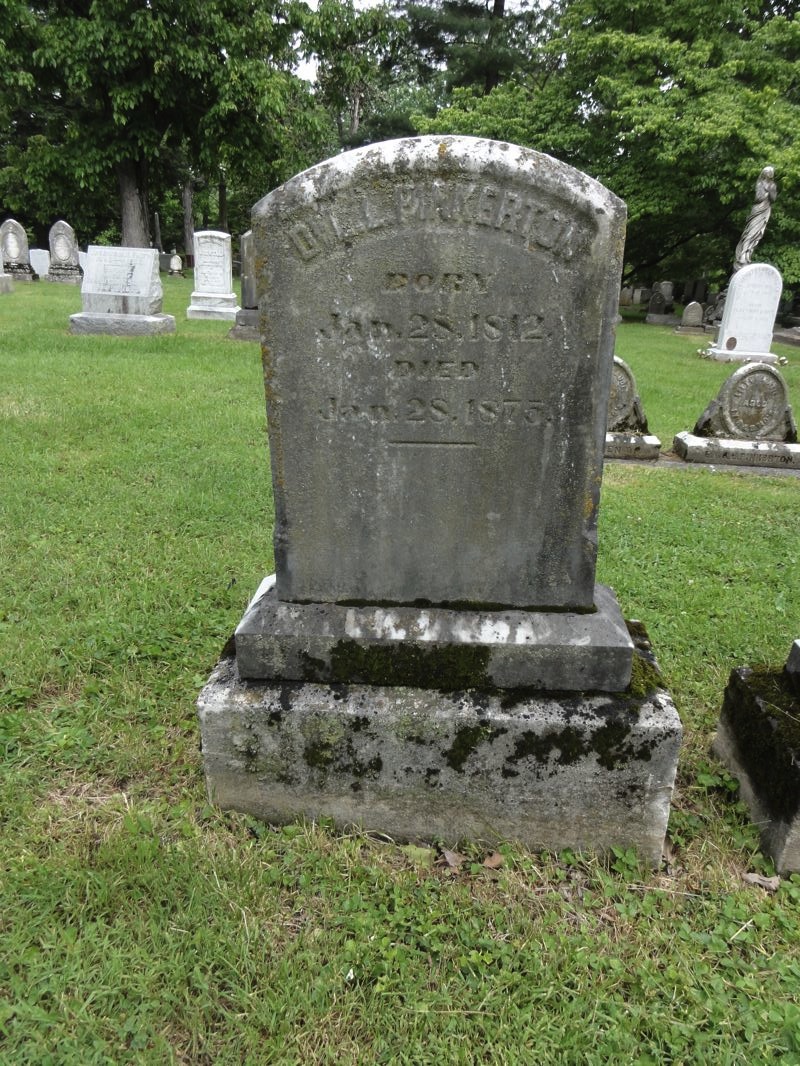 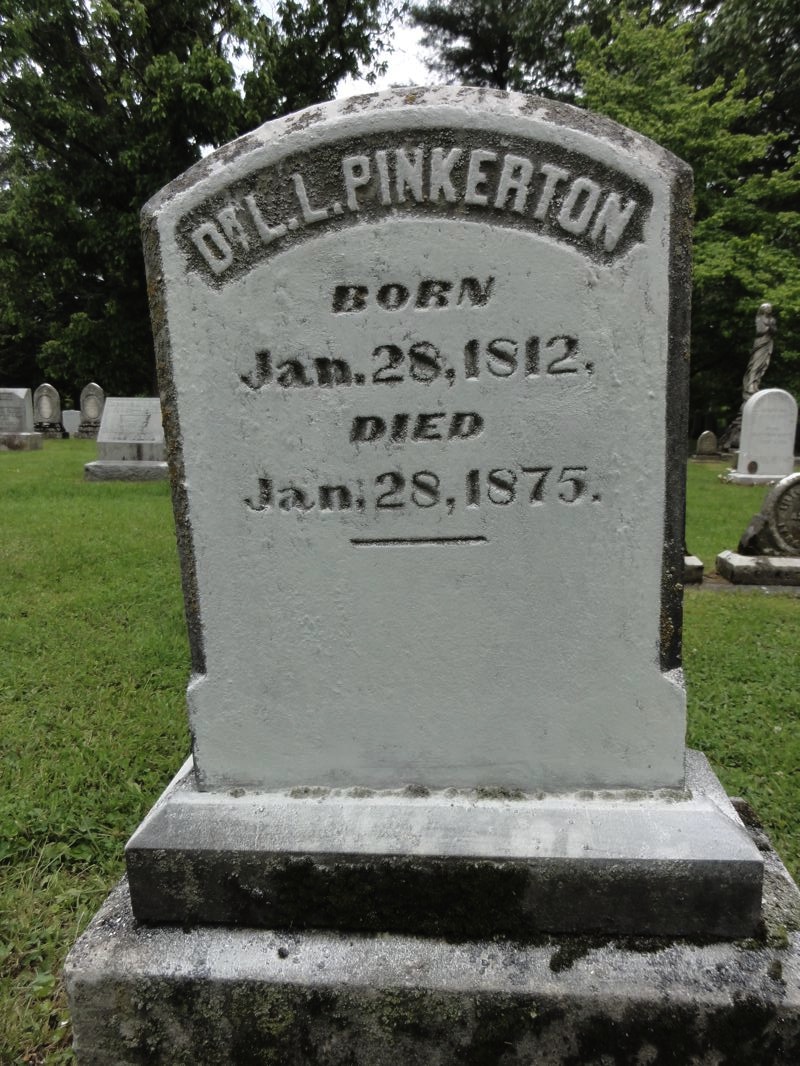 See Where Pinkerton Is Buried At Lexington Cemetery, Lexington Kentucky