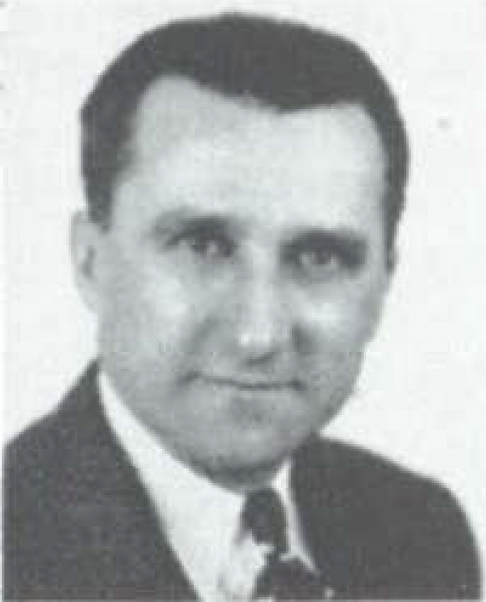 The Life of J.W. Norman

Jewell W. Norman was born in Sharpe, near Benton, Kentucky June 2, 1903. He was married to Elmer Addie English in 1925. The two had two children.

Jewell was baptized by Cecil B. Douthitt in 1921. He began preaching in his hometown of Sharpe in 1923. He attended Freed-Hardeman College and began preaching for the church in Ferndale, Michigan in 1932. In 1936 he moved back into the area near his home, and for about fifteen years he preached monthly for several churches in Marshall County, Kentucky. The family moved to work with the Bristol Road church of Christ in Flint, Michigan in 1947. Only there for two years, the family moved to work with the Bellmeade Ave. church in Evansville, Indiana in 1949. In 1953 they moved to Russellville, Kentucky and worked with the church there until 1955. Metropolis, Illinois was the next place of work where the family devoted themselves from 1955 to 1958. Then it was back to work with his home congregation at Sharpe beginning in 1958. For the next several years they worked among the good brethren at Sharpe. From there he preached many years for the Houser Grove congregation in Boaz, Kentucky. This was his last located work.

His wife, Elmer passed away January 14, 1980. The funeral and burial took place at the Sharpe church and cemetery. Brother Norman lived several more years, and was briefly remarried. His second wife, Mary Staton, also preceded him in death. He passed away Tuesday, May 18, 1999, and burial followed beside his first wife, Elmer, in the cemetery at Sharpe church of Christ. (See the wonderful tributes below.)

The glorious words which the wiseman of old used to describe godly women could properly be ascribed to the beautiful Elmer Noran, deceased wife of the beloved and faithful Jewell W. Norman. "Who can find a virtuous woman? for her price is far above rubies. The heart of her husband doth safely trust in her. . . ." (Proverbs 31:18-11.)

Sister Elmer (English) Norman was born to Mr. and Mrs. O. T. English on December 2, 1906 in Marshall County, Kentucky. On October 9, 1925 she vowed herself to Jewell W. Norman as his loyal wife. The beautiful bond of marriage was shared by both of these Christians for a little over fifty-four years. During that time, she was a continuing source of encouragement to her husband, children, grandchildren, greatgrandchildren, relatives, and friends. Brother Jewell has stated that she was a "loving and affectionate wife, a good mother, and a friend of all."

This writer's association with sister Norman dates to only the spring of 1919. From that time, however, his admiration for her and her noble husband grew to a deep appreciation and love for the same due to their loyalty to the Lord Jesus Christ. During visits in their good home she was always more than eager to extend love and encouragement. Her good hands provided tasty substances which were always accompanied with laughter at the kitchen table.

Sister Elmer Norman departed, time bound for eternity, on the sad night of January 14, 1990 during the 8:00 p.m. hour. She had suffered a massive stroke a few days previous to the above date and had never regained consciousness. She will be missed greatly by her dedicated husband, her two children, her grandchildren and great-grandchildren, many relatives, those of like precious faith, and many friends.

At sister Norman's funeral at which this writer was privileged to participate with brother O. D. McKendree, many attended. On behalf of brother Norman and all his and sister Elmer's people, gratitude is hereby extended to all who expressed their sympathy through cards, letters, phone calls, flowers. and their presence.

Truly the words of the apostle whom Jesus loved could not be more appropriate, "Blessed are the dead which die in the Lord from henceforth: Yea, saith the Spirit, that they may rest from their labours; and their works do follow them." (Revelation 14:13.) Sister Elmer was a member of the Houser Grove congregation where brother Jewell, her husband, is presently into his eighth year of work as evangelist. This fine congregation of God's people is located on the outskirts of Paducah, Kentucky. If anyone desires to send cards to brother Norman they can be sent to: Jewell W. Norman, 3236 Spring Street. Paducah. Kentucky 42001.

-Carl Martin Ruiz, Editor Of The Admonisher, as found in The World Evangelist, March 1980, p.10

I have heard Jewell W. Norman preach many wonderful and influential sermons, but none excelled his sermon on God's care for his people, which he illustrated with the story of Joseph. This was while he was working with the church in Ferndale, Michigan. He showed us that "all things work together for good to them that love God." (Romans 8:28.) No story can be found that will show that God does care and provide for his people more than does the story of Joseph. It is recognized as one of the world's most valued short stories. God was with Joseph in the valley as well as on the mountain top. He was with him while he was in prison as well as when he was ruling in Egypt. Perhaps the most tender scene in the story is the recognition scene, where the brothers are made to recognize Joseph whom they had sold many years before. And Joseph said, God's hand was in it all. I am grateful to Jewell W. Norman for introducing this story to me in the manner in which he did, as well as for so many other wonderful things he has done for me, for it was he who baptized me over fifty years ago. The story of Joseph is recorded in Genesis, chapters 37 through 50.

I think it was 1943. Jewell W. Norman was preaching in a series of gospel services at the church of Christ in Bradford, TN. I was 17 years old and owned an A-Model Ford, which was about 14 years old. We lived about 12 miles from Bradford. I attended the Bradford revival on Thursday and Friday evenings. Many of my kinfolks and friends were members of the Bradford congregation. I always enjoyed visiting with the saints there. I have preached there in several gospel series of meetings.

In 1943 there were no airconditioned church buildings in our area, or anywhere else so far as I knew. I had never heard of such. Some congregations had electric fans. I do not recall if there were or were not electric fans in the Bradford meeting house in 1943. I do vividly recall that nearly everyone in the assembly had a funeral home hand fan! Also, Jewell Norman used one constantly as he powerfully preached the gospel.

On Thursday night Jewell preached on one of the cases of conversion in the New Testament Book of Acts; I believe it was the conversion of Saul or Tarsus, later known as the apostle Paul. I greatly relished the able manner in which Jewell preached the sermon.

On Friday night brother Norman preached on Hell. It was a powerful message. Garfield McCaslin responded to the Lord's invitation following the sermon and was baptized into Christ for the forgiveness of his sins, and he thus became a Christian. (Acts 2:38.) Garfield is still a faithful Christian. He has served as an elder. His wife, Mildred Taylor McCaslin, who is one of my distant cousins, has been a faithful Christian since those days of my boyhood. She and Garfield are dear Christian people. They live in Chicago and in Florida.

When I was so young, I greatly admired Jewell Norman for being such a good preacher, and I continued to do so always. I was with him at various places through the years, and visited him several times in his home. He and other admirable evangelists, including Hugo McCord, J.R. Stockard, Charles Houser, Adron Doran, Ira Douthitt, N.B. Hardeman, Harold Watson, Fred Chunn, and others had a great influence on my becoming a gospel preacher.

Jewell was born in Sharpe, KY June 2, 1903. He was baptized into Christ (Galatians 3:27) by Cecil Douthitt in 1921. He began his preaching career in Sharpe in 1923. He married Elmer Addie in 1925. They had two children. Elmer, and also his second wife, Mary, preceded him in death.

Brother Norman died May 18, 1999. His funeral was conducted in Filbeck and Cann Funeral Home Chapel in Benton, KY, May 22. The following spoke at his funeral: his grandson, Norman Dunigan; O.D. McKendree; Jim Phillips; Lake Riley; and Gene Nesler. His body was buried in Sharpe Cemetery. Two of Jewell's good friends were Floyd and Frances Beard of Paducah, KY. (They are two of mine too!) I asked Frances to send me some matters of interest about Jewell. She wrote the following:

"I remember Jewell as one who stood for the Truth and proclaimed it boldly! He could still preach at Good Samaritan Hospital after his memory was lacking. He wanted to be sure he did his share to go the extra mile. He was a devoted, faithful family member and friend. As my dad would say of him, 'He always looked like a Philadelphia lawyer.' It always pleased me that he had such respect for my father, 'Cousin Will' and I think he emulated him. His dad 'Cousin Yancy' was Dad's cousin and we visited often because Jewell's grandmother, Aunt Lil was an invalid (broken leg which was not set and cousin Yancy looked after her and Uncle Henry Norman.)

"Charlie Arnett was close to Jewell, and his wife, Ruby, contributed this story about him, an incident that happened while he was holding a meeting where Charlie preached. While Jewell was expounding, a fly or bug flew into his mouth and he swallowed it. Not missing a lick, he continued, commenting that 'he was a stranger and I took him in.' He never was at a loss for words while being scripturally correct at the same time.

"His devotion to his family was an inspiration to all of us. He was generous with time and money. His first wife, Elmer died suddenly. His second wife, Mary had a stroke. He had relatives and friends drive him to see Mary, on a regular basis for several years after he could no longer drive. She was in a nursing home at Mayfield, about 25 miles from their home in Paducah. My husband, Floyd was one of the main ones who did this, to show the esteem in which he held Jewell. One of our boys remarked to his dad about these trips, that it was just like riding around with the Apostle Paul.

"You have probably heard about the wedding of O.D. and Imogene McKendree. It was late at night when they got to Jewell's house. He was wearing a bathrobe when he performed the ceremony. I cannot imagine Jewell in a bathrobe, because he mowed his yard in a suit!"

I am grateful to Frances for what she wrote. 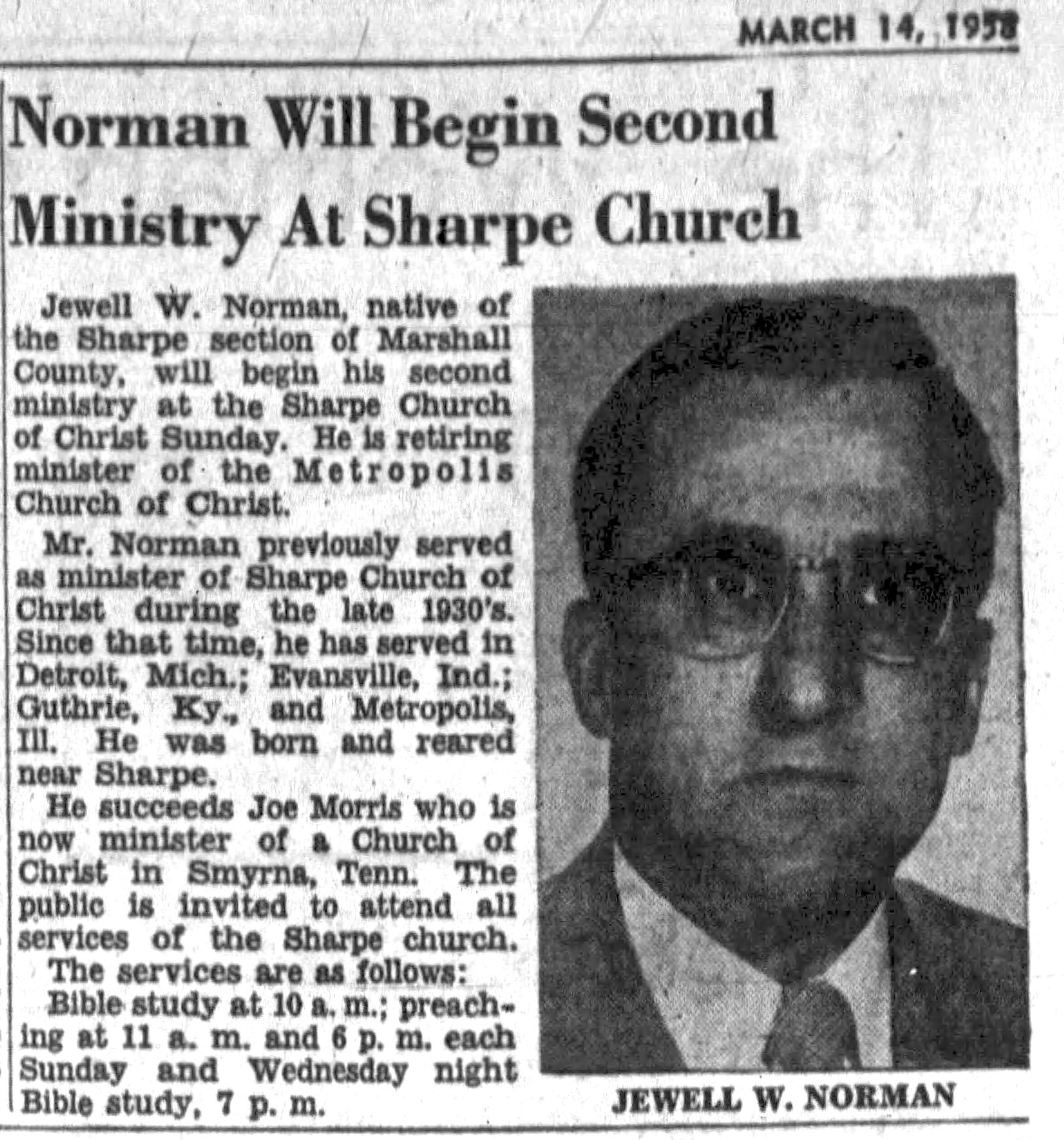 Advertisement for a Gospel Meeting 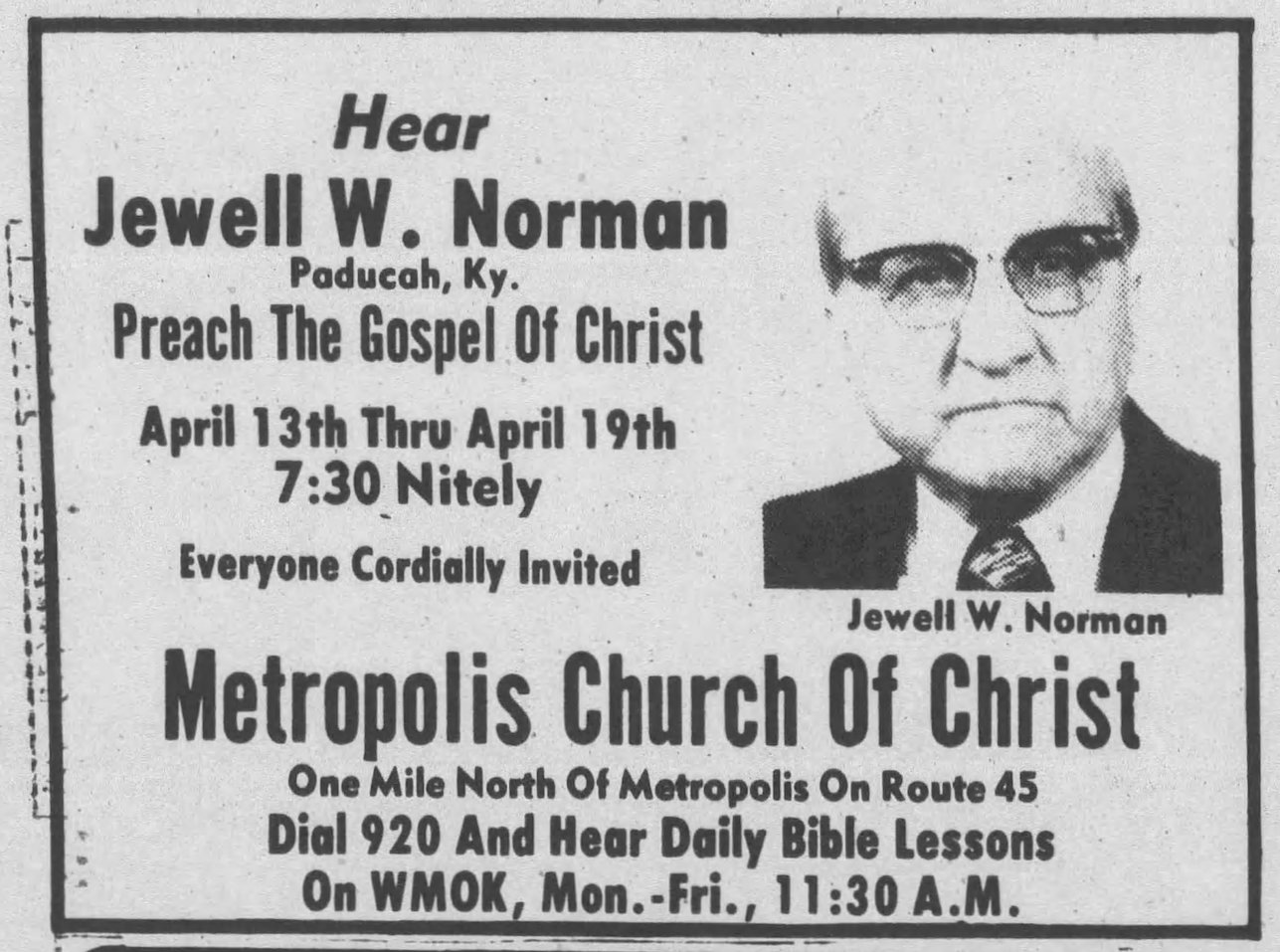 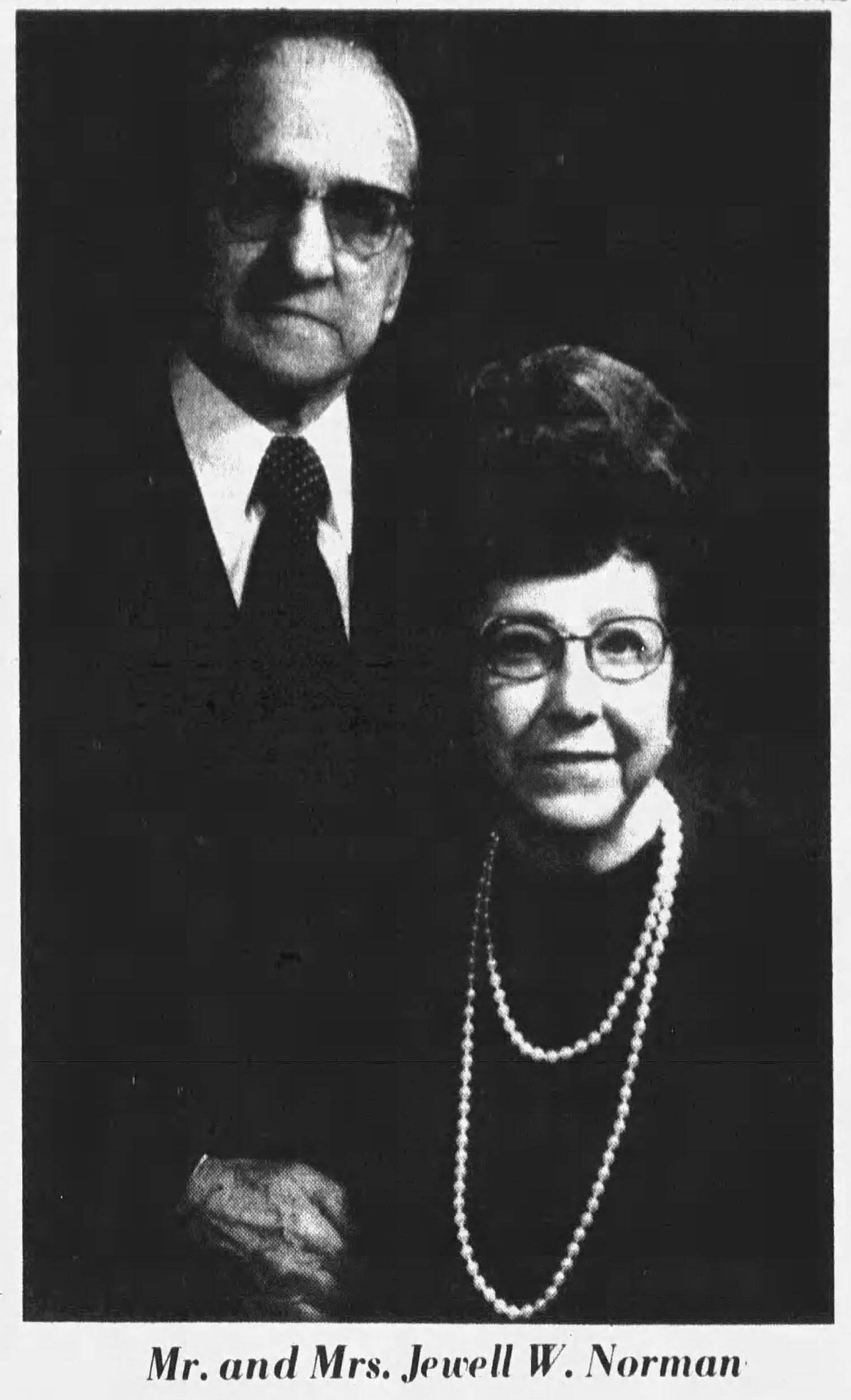 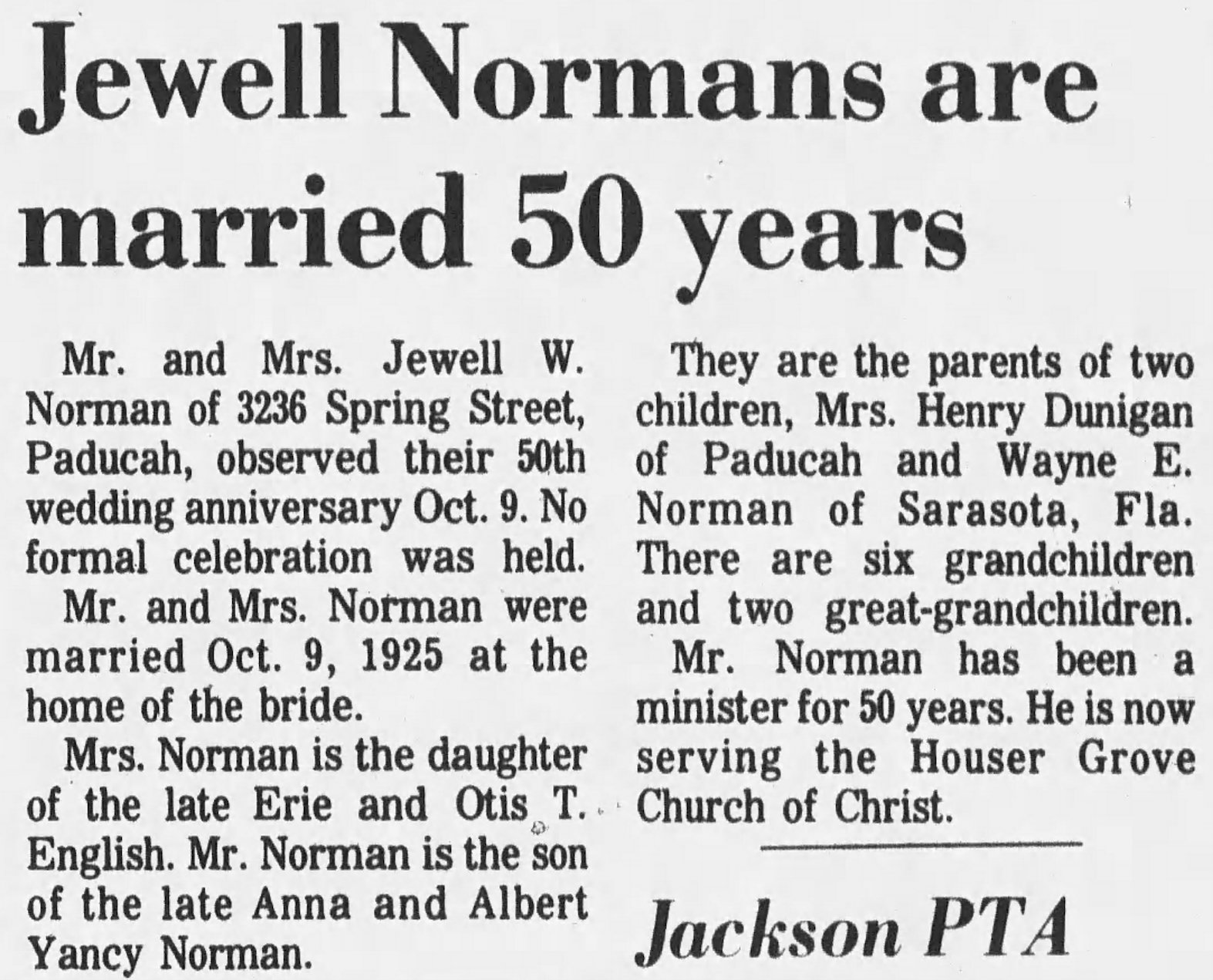 Jewell W. Norman died May 18, just two weeks before his 95th birthday. He was born to Yancy Wayne and Anna LouVenia (Story) Norman on June 2, 1903.

A graduate of Freed-Hardeman, he began preaching in Sharpe, Ky., at age 20. He served as minister for churches in Kentucky, Michigan, Illinois and Indiana and was a member of Central Church of Christ in Paducah at the time of his death.

He is survived by a daughter, Erie LouVenia Dunigan of Paducah; a son, Wayne, of Sarasota, Fla.; six grandchildren and six great-grandchildren. He was preceded in death by his first wife, Elmer Addie English Norman, and his second wife, Mary Staton Norman.

The Normans are buried in the cemetery behind the Sharpe Church of Christ is just southwest of Calvert City and northwest of Benton on Hwy. 68 in the Sharpe community. The graveyard is just behind the church building. On the far left is a light pole. Just next to it in the front plot is the Norman family plot. GPS location and map below pinpoints the exact location. 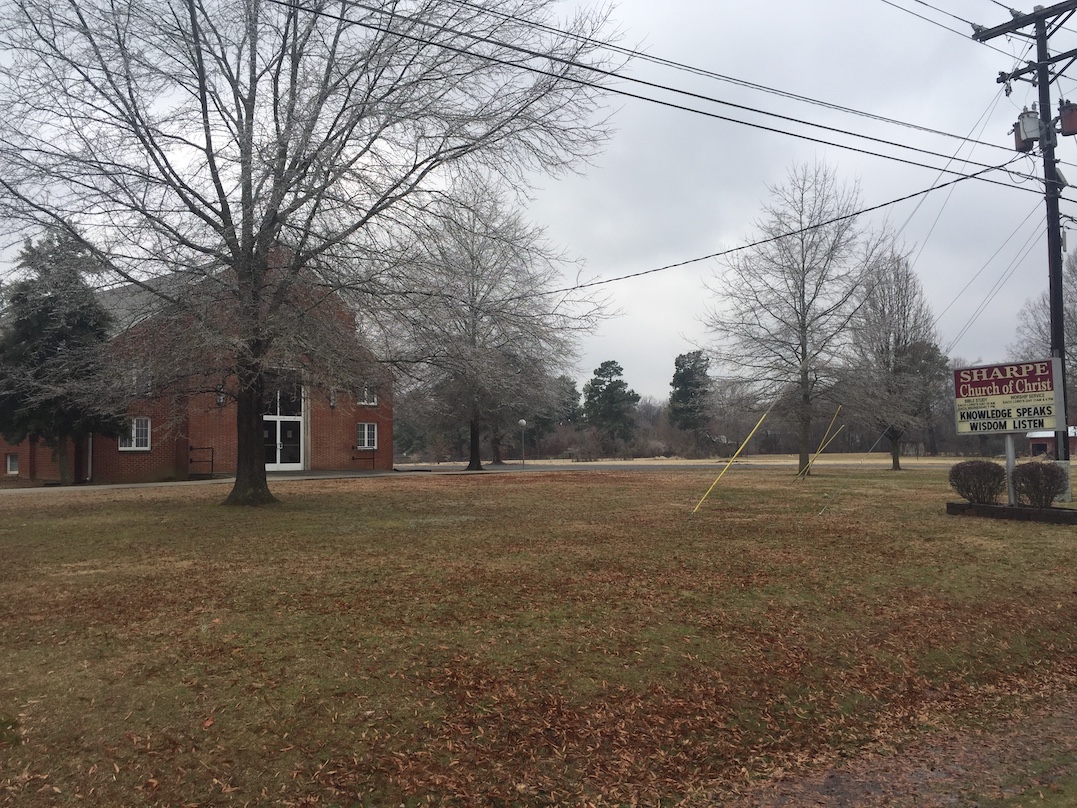 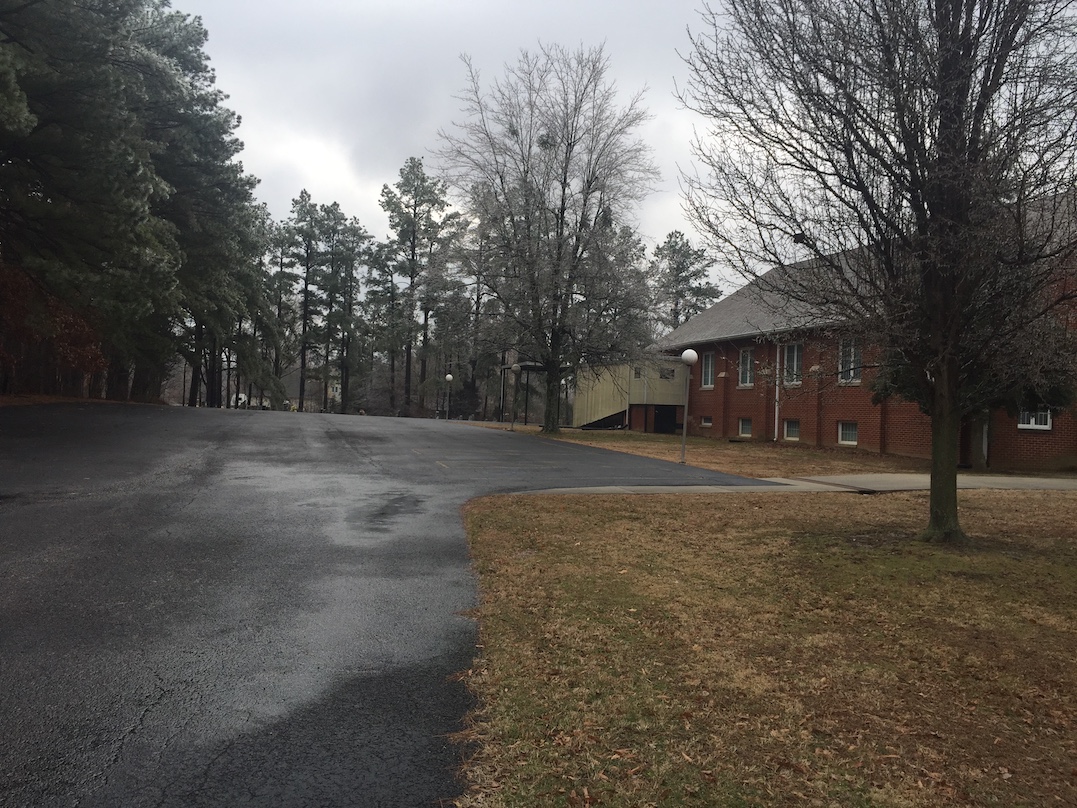 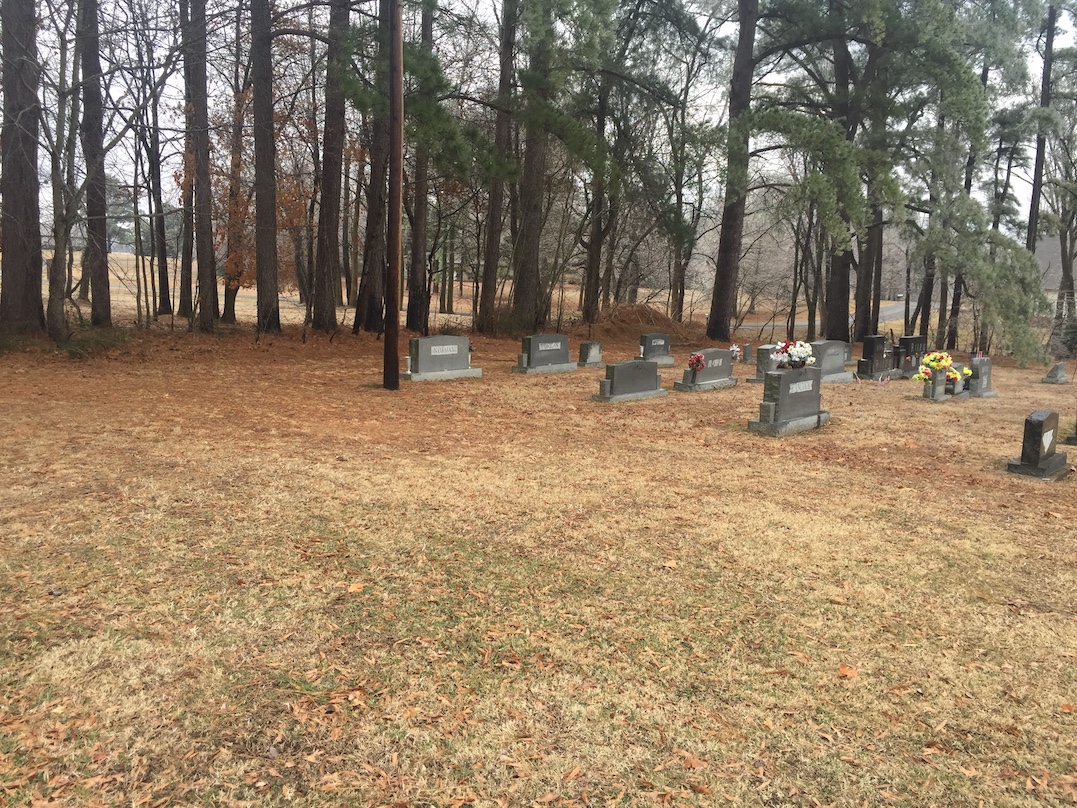 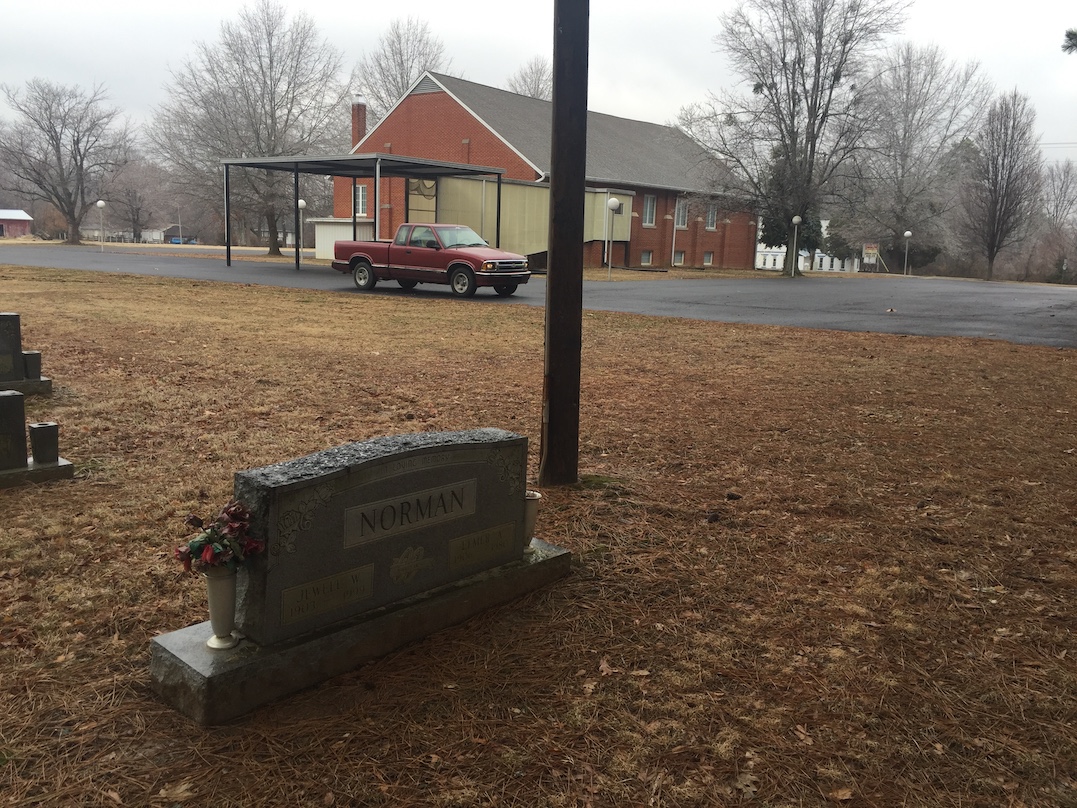 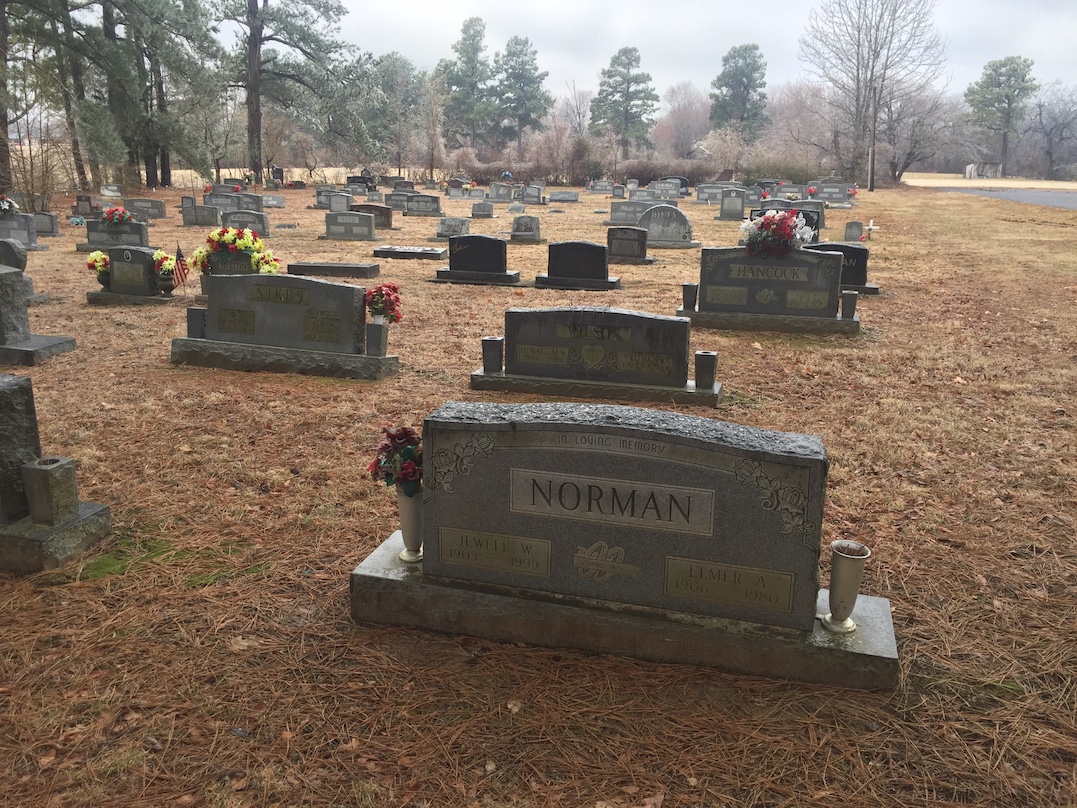 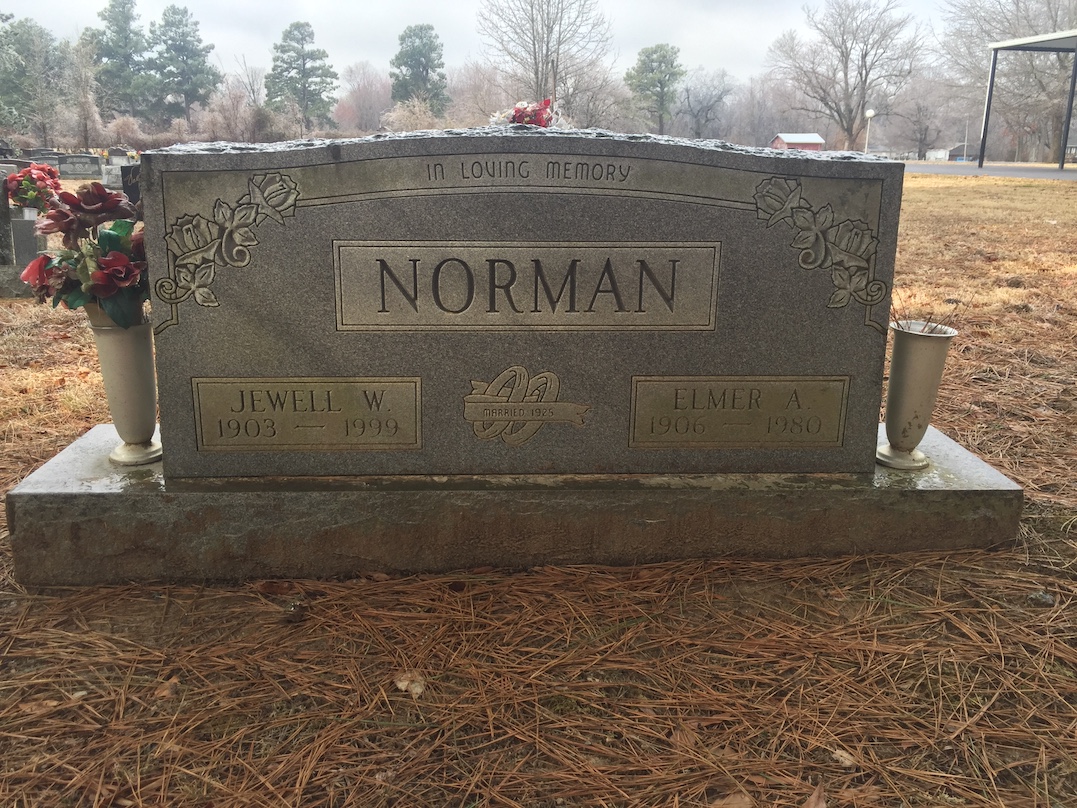