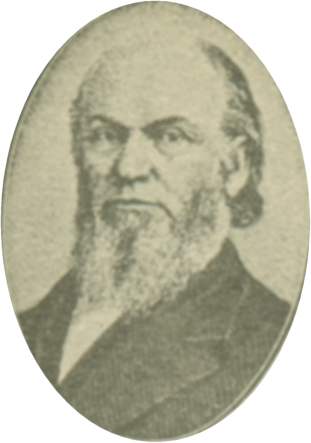 Biographical Sketch On The Life Of D.S. Burnett

David Statts Burnet was born in Dayton, Ohio, July 6, 1808. When eight years of age his parents moved to Cincinnati. At the age of thirteen, his father having been elected mayor of the city, David was taken into the office as his father's clerk. About the same time he was sprinkled, in accordance with the Presbyterian faith, in which he had been brought up. At the age of sixteen he was an active worker in the Sunday school, which led him into a careful study of the Scriptures. His investigations soon convinced him of the errors of Presbyterianism, and especially of infant sprinkling for baptism, and therefore, on the 26th of December, 1824, he was immersed and became a member of the Enon Baptist Church.

At that time he was unacquainted with the teaching of Alexander Campbell and those associated with him in pleading for a return to primitive Christianity; and yet he rejected the authority of human creeds, and declined to accept any test of faith but the word of God, basing his application for baptism on Rom. 10:6-10, not knowing that any one else had done so before. They hesitated, but he was received by the Baptists. He was only sixteen, but began at once to preach the gospel. At the age of twenty he was called to preach at Dayton.

In the winter of 1827 he united with Elder William Montage, of Kentucky, in the organization of Sycamore Street Baptist Church of Cincinnati. The eighty members adopted a more liberal and progressive platform than usual at that time. The principles of the Restoration, as advocated by Alexander Campbell, Walter Scott and others, now became generally known, and their influence upon the Baptist churches throughout the West was very great, in some places completely absorbing whole districts and enlisting a very earnest interest in favor of the plea for the return to primitive Christianity. The Sycamore Street Baptist Church was not free from this influence, and it was not long until a division took place, the two portions forming different congregations and finally growing into the present Ninth Street Baptist Church and the Christian Church at the corner of Eighth and Walnut Streets, now merged into the Central Christian Church. Bro. Burnet adhered to the latter organization, and until his death was thoroughly identified with the movement and a zealous defender of the principles and practices advocated by disciples of Christ. He yielded to his convictions in opposition to every worldly interest. He broke away from wealth, position, fame, friends, relatives and religious associations, and united with a people at that time held in low esteem. Nor could it be expected otherwise. The plea the disciples made struck at the foundation of all the existing religious sects; hence it is reasonable enough to suppose the sects would bitterly denounce a movement which had for its object their complete destruction. This attitude of the Restoration arrayed all the hosts of sectarianism against it. The contest was a fearful one, and the odds against the few who strove for a return to apostolic Christianity were truly appalling. But truth is mighty and will prevail, and Bro. Burnet lived long enough to see his brethren a powerful and influential people in the land, and to reach this success no one labored more faithfully and earnestly than himself, traveling extensively, working day and night, preaching the gospel, organizing churches, writing for the papers, editing books, teaching school, doing anything that was necessary to forward the cause which lay so near his heart.

From 1834 to 1840 he published the Christian Preacher, a monthly magazine containing choice discourses and essays on the great themes connected with man's redemption. In 1846 he published the Christian Family Magazine; then the Christian Age for several years. At another time he published, simultaneously, The Reformer, the Monthly Age and the Sunday School Journal. He also edited the "Sunday School Library" of fifty volumes, and an edition of the Christian Baptist in one volume. In the Age and Reformer he had partners. He served as a pastor sixteen years at Sycamore Street and then at Eighth and Walnut Streets. In the A. C. M. S. Convention in 1567, D. S. Burnet was chairman of a committee on the increase of the number of preachers of the gospel. The other members of the committee were O. A. Burgess and Isaac Errett. As chairman he wrote and read:

"Your committee to whom was referred so much of the report of the Board as refers to the supply of ministers to perform the missionary labors of the society, beg leave to report:

"That we are profoundly impressed with the importance of a subject which lies at the very foundation of our whole enterprise, for without missionaries our society is utterly useless. In the commencement of our efforts as a people we could not employ the talents with which God had enriched us, but now the state of the case is reversed. We are more wealthy in churches than preachers. Our pioneers are fast departing to their reward, and though we have numerous colleges for the fitting of pious and gifted sons of the church for the work, we must hasten the supply to meet the vastly increased demand. The tide of death waits not on our tardiness, but is sweeping out into the ocean of eternity a whole generation before we have submitted to them our plea of the simplicity of the gospel, and the disaster of a disunited church in the face of a united opposition.

"While, therefore, we commend to our churches the facilities of our noble universities and colleges, we must urge upon them the more speedy preparation of a large number of vigorous working men for the field. We deem it of the highest importance that each church inquire whether there is not in its midst a diamond, or more than one, that needs only the labor of the spiritual lapidary to prepare it for the adornment of the brow of the bride of Christ. There is scarcely a church in the land which can not furnish such a jewel. All preachers and elders should search out such from the mines of intellectual and devotional wealth lying around them. This must be done, and done speedily. God will hold us to a rigid account if we are derelict. 'Go, preach the gospel,' is not more seriously urged upon us than the requirement, 'Pray ye the Lord of the harvest to send forth more laborers into the harvest,' now growing in rankness and waste: and prayer without effort is folly, if not hypocrisy. In the person selected, talent and devotion should be happily blended.

The facilities afforded by courses of lectures, something like those of the legal profession, are now inviting the attention of young men of both English and classical attainments in connection with some of our institutions free of charge. The liberality of these propositions should call forth a general response from the churches at once, and in the course of one or two seasons the Macedonian cry now echoing over our continent will be caught by many willing ears. These agencies, church officers, the course of popular lectures and the regular instruction of all our colleges, zealously cooperating, will soon bring the supply up to the demand, however great. Few better pleas for the unity of the church can be conceived than may be founded upon this excessive call for the multiplication of ministers. Were all the lovers of Jesus united, one-fourth the number of religious teachers now in the field would be ample for the requirements of the immense church augmentation which would result from such a union. But we are in the midst of the perilous times when the burden of the plea for this union itself demands a multiplication of our ministerial resources a hundred-fold. All of which is respectfully and affectionately submitted."

Having made such a plea to recruit the ministry, he suits the action to the word, and left in the custody of the Ohio Christian Missionary Society, at his decease, $10,000 to aid in preparing young men for the ministry. It has now increased to over $25,000. This sum is invested, and the interest is loaned to young men preparing for the ministry of the Word.

Bro. Burnet all through his career advocated a prepared ministry to lead the churches to a clear and full knowledge of the word of God. Experience has proved that it is better to loan the students money than to give it to them. To pay it back increases their self-respect. They are permitted to have the fund five years without interest. After that period they pay it, and so the fund now amounts to over $25,000.

Closing this sketch, it may be said that at the age of sixteen he became known as the "Boy Preacher." In the memoirs of Alexander Campbell it is said that he was quite low in stature, but erect in carriage. His head was large and finely formed; his eyes prominent, full and sparkling; his features regular, with a mouth somewhat large, but firmly set, while in his bearing he was remarkably self-possessed, dignified and courteous, giving himself wholly to the cause of the Restoration. After a few years he became one of its most distinguished and successful advocates, delighting large audiences by his eloquent and copious diction, and his able presentations of the principles of the gospel, which he widely disseminated, not only in Cincinnati, but through many of the States from Maryland and Virginia to Kansas.

David S. Burnet is dead. He bade adieu to earth, in Baltimore, July the 8th, 1867, in the 59th year of his age, greatly lamented by all who knew him. More than thirty years since we formed the acquaintance of this excellent brother, and although, as we thought his slight leaning to human wisdom, marred somewhat his labor in the kingdom, he was a good and great man. For finish of oratory, we had not in all our ranks, his equal; and as a genial companion, and faithful steward in the house of God, we had, perhaps, not his superior. He possessed the rare ability to deal in love, hard blows, and hence his labors were always blessed. Our beloved Sister Burnet has our sincere sympathy, and we never can forget the happy days we spent with her and her excellent husband, at their own home. But time is a reaper, as well as sower, and our best friends must sooner or later, be taken from us. Rest from thy toils, dear brother, thy works will follow thee. 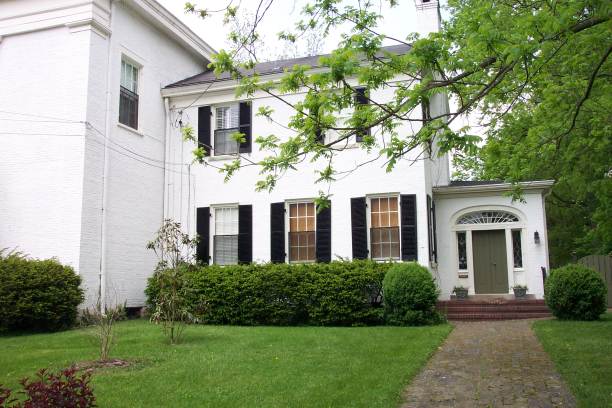 The Entrance Of The Burnet Home Is All That Remains Of The Location
Where Bacon College's Second President Lived In
Georgetown, Kentucky. The home is presently privately owned. 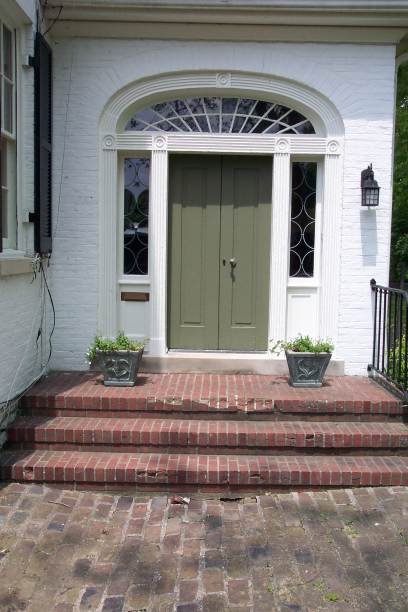 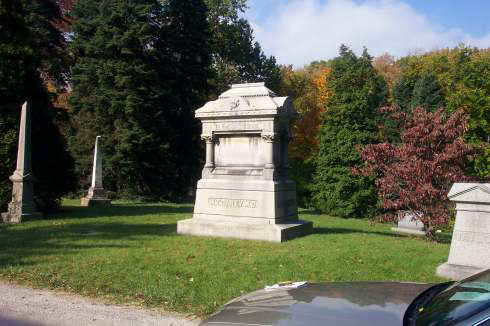 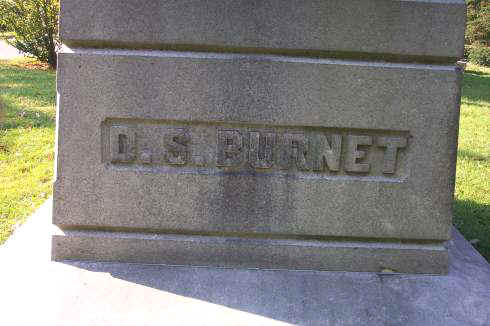 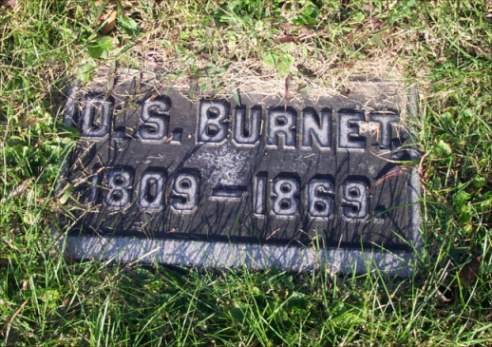 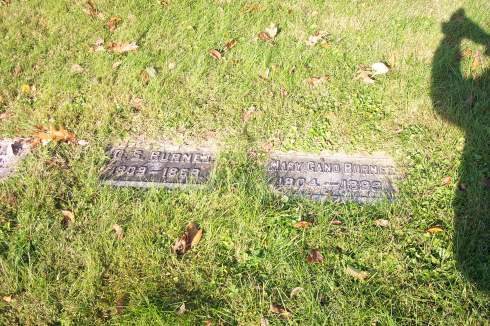 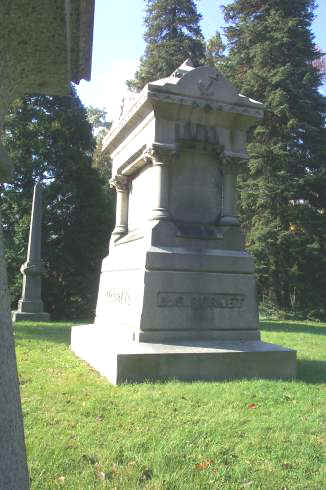 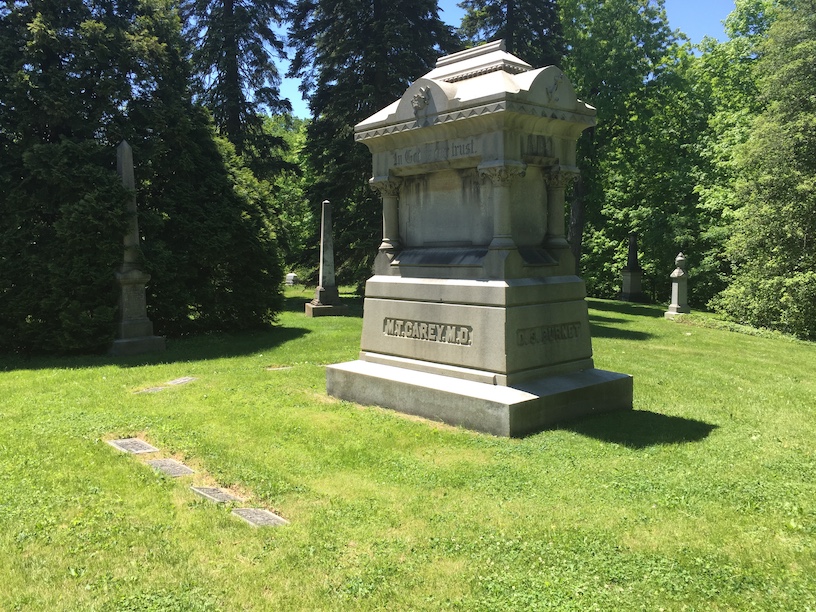 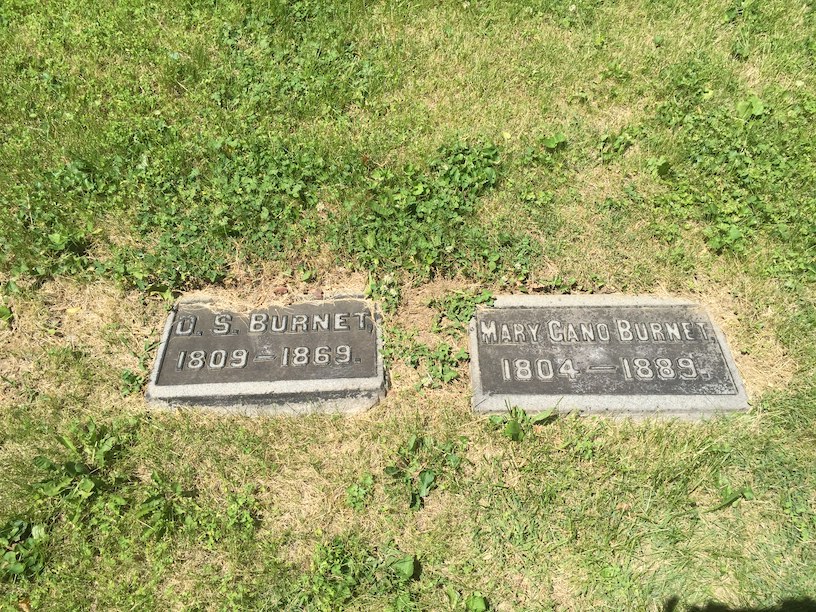 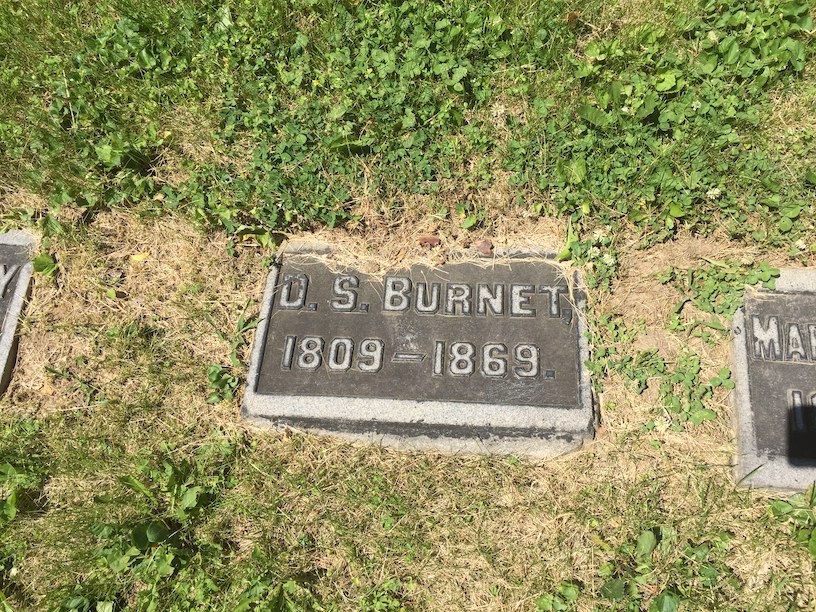