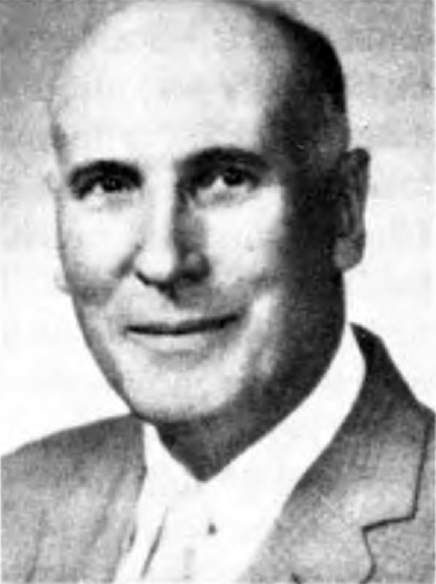 The Life of M.A. Mansur

Minnis Alvah Mansur was born June 25, 1900 in Ray County Missouri near the small town of Stet which is just across the county line in Carroll county. His parents were Algernon and Anna Mansur, who farmed and raised cattle. After the family moved to Oklahoma in the early years of the 20th century, he continued in that business and served as a State Legislator in the Sixth Oklahoma Legislature. They had four sons and one daughter and they reared them all in The Faith and lived to see all of them faithful and active Christians. Brother Mansur was baptized into Christ in 1914, when he was fourteen years of age by Dr. W. W. Brewer, a faithful gospel preacher and chiropractic physician, who had married Brother Mansur’s only sister. The Mansur family was then living near Elk City, Oklahoma where they had moved from Missouri. Near their home Brother Mansur attended Bales School for his grade school work and attended high school in Elk City. He then attended the University of Oklahoma where he earned the B. A. degree in 1922 and the M. A. in 1925. As a young man he was active in the Church, and preached his first sermon in Elk City at the age of nineteen. On June 4, 1922 he was married to Miss Veda Vivian McCall, daughter of Will and Mary McCall, faithful Christians of Hammon, Oklahoma. Dr. Brewer performed the ceremony for them in Oklahoma City. Three children, all of whom are living, were born of this union. They are: Kenneth V., Vivian V. (Mrs. Chris Clark), and Donald Dee. Both the sons and son-in-law are active in the Church, with all three of them preaching. Like all good men, Brother Mansur loved his children, and the happiest day of his life was on Mother’s Day, 1935 when he baptized all three of them into Christ at the Sixth and Arlington Street church in Lawton, Oklahoma.

He was trained to be a teacher and for many years he taught school, preaching at every opportunity during these years. Among his teaching assignments was a period spent as Superintendent of the Hill City, Oklahoma schools. He also taught for a time in Southwestern Teacher’s College in Weatherford, Oklahoma. He taught many years in the Lawton, Oklahoma schools, where he taught Speech, Drama, and Debate. His teams won many outstanding honors in various meets in Oklahoma, and his debate team won the State championship at the University of Oklahoma in 1926. He was also President and Director of the Lawton Little Theatre Club for many years. After moving to Lawton he continued to be active in the Church, and did much preaching both in Lawton and in neighboring communities. Together with Roy Stafford and Robert Sprague, he served as an elder in the Sixth and Arlington Street church, which was the first congregation our people had in Lawton. They all took turns in the pulpit, for in the first years they did not have a “full time” preacher.

It was my privilege to work with them for a number of years in the forties. Brother Mansur, along with the others, could always be depended upon to do the things that needed to be done. After the Eight and Lee Street church was begun in 1945, in peace and harmony, from the Sixth and Arlington Street church, it was decided to revamp the leadership at Sixth and Arlington by asking the congregation to select some new elders, and to express either approval or disapproval of those then serving. They were all approved and continued to serve, with Brother Mansur beginning to do more and more preaching. Finally, in 1949 he began to work all the time with the Church in nearby Carnegie. Brother Mansur was a generous man. He believed that we should “bear one another’s burdens. . .” and often I have known him to leave a generous amount of money on a table when he left from a visit to the sick, though I never heard him mention this. He evidently continued this practice to the end of his life, for in Vinita and Adair elderly widows and others who might be in need were often the recipients of his generosity in the form of money, groceries, or trips to the doctor, who might be seventy miles away in Tulsa. As he grew older, he was more concerned with the elderly, and visited much in nursing homes in the area. He had a practice of rubbing people’s feet, which often seemed to give them certain relief. Many people benefited from this service, including a Mr. Neff who felt that Brother Mansur had saved his life by such service.

Throughout life he was concerned with young people, and for many years in Lawton conducted a Sunday evening class for them. He taught many of the boys to make talks. Some of these became gospel preachers, including Wm. F. (Billy) Walker, and Virgil Trout. He had young people often in his home, and during World War II usually had a house full of service men from Ft. Sill on Sunday. He tried hard to help the young people fill their time with worthwhile things and so was often involved in various outings in the nearby mountains and streams, and other forms of wholesome recreation. He continued to work with young people to the end, and while preaching in Columbia, Missouri, they often had college students in their home even as they had had the service men at Lawton.

As the years passed he gave more and more time to preaching the Word. This work took him into twelve of the states, where he conducted many gospel meetings and brought many people to the Lord. In Oklahoma he worked with the Weatherford, Carnegie, Lawton, and El Reno churches before moving to Columbia, Missouri in 1951. In 1955 he moved to Rolla, Missouri, and in 1949 to Vinita, Oklahoma where he worked for about two years; then to Adair, Oklahoma, where he preached from 1961 to 1969, which was “the end.” Fortunately, he was spared a long illness. In his home in Vinita on December 5, 1969, he just “went to sleep.” The following Sunday, the eighth, the service was conducted in the meeting house in Adair, where he had been preaching for the past several years. Bobby Keys and Howard Speir conducted the service, and the body was returned to Elk City, the “old Mansur home,” where it awaits the resurrection to a glorious life. Sister Mansur continues (April, 1980), but is in very frail health. Brother Mansur was a good man — I knew him. In the full assurance of faith I hope to meet him again someday where sorrows never come.

-Loyd L. Smith, Gospel Preachers of Yesteryear, pages 207-209. This piece originally appeared in the The Christian Worker in April, 1980. It is a timed piece, and some of those mentioned as now living, are deceased.

Directions To The Grave of Minnis A. Mansur

M.A. Mansur is buried in Elk City, Oklahoma in the Fair Lawn Cemetery. Elk City lies west of Oklahoma City about 110 miles. Travel on I-40 to Exit 38, (Hwy. 6, S. Main St.) and turn north. Go through town, the road will become N. Main St. The road will dead end into W. Country Club Blvd. Turn left on W. Country Club Blvd. Go one block, and turn right on N. Washington Ave. (There was a funeral home on the corner when we visited in October, 2004). Travel out N. Washington Ave. until you see the cemetery on your left and right. Mansur is on the left side of the road up from the cemetery office. Do not enter at the office, but continue down until you get to the second entrance to your left. Enter and make your first left. At the end you will begin to take a hard right. Stop the car. Enter at the corner into the section on your left. The grave will be in about four of five rows, and then three rows to the left toward the main road. See Cemetery Map Location Here. The preachers buried in this cemetery include: Dr. W.W. Brewer, John C. Carman, M.A. Mansur, and Albert C. Trent. Mansur Plot Info: Section 1955, Block D, Lot 51, Space 3 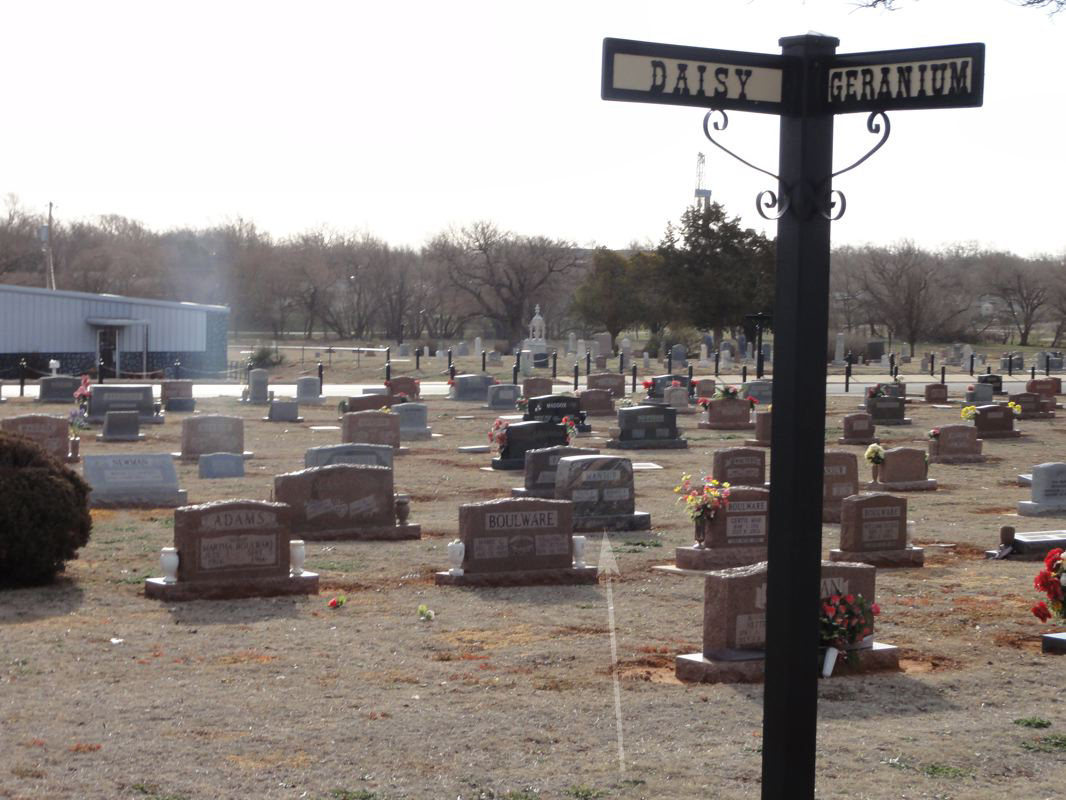 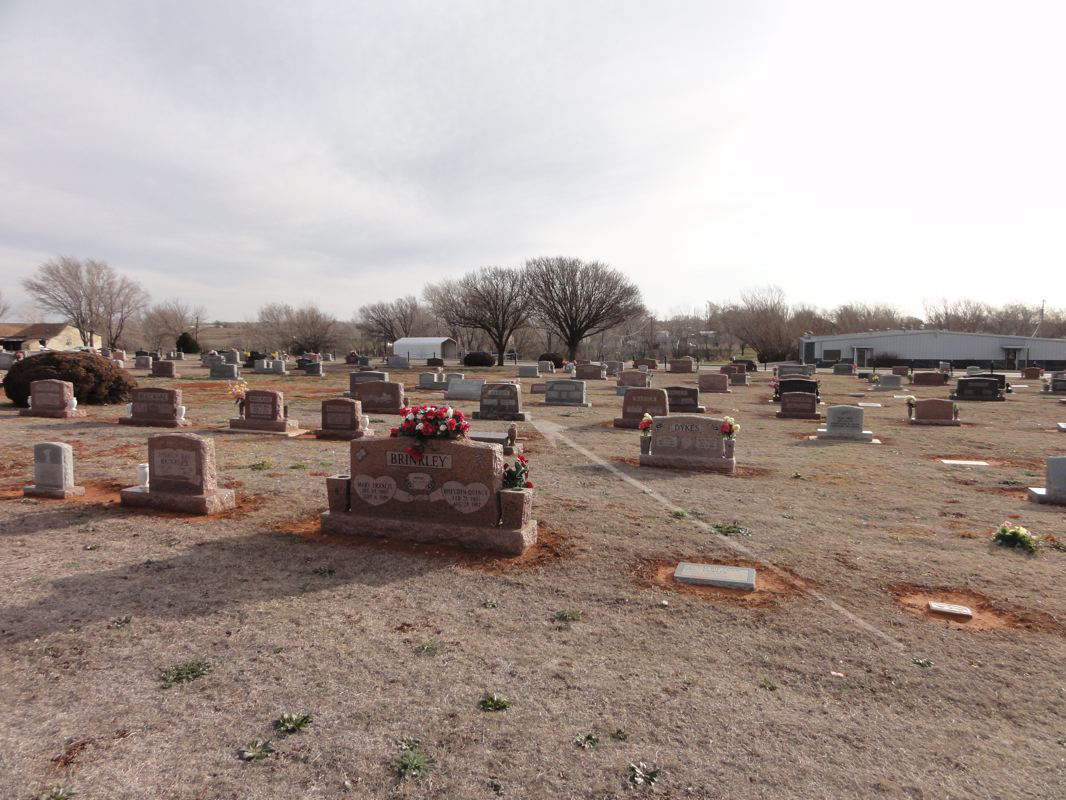 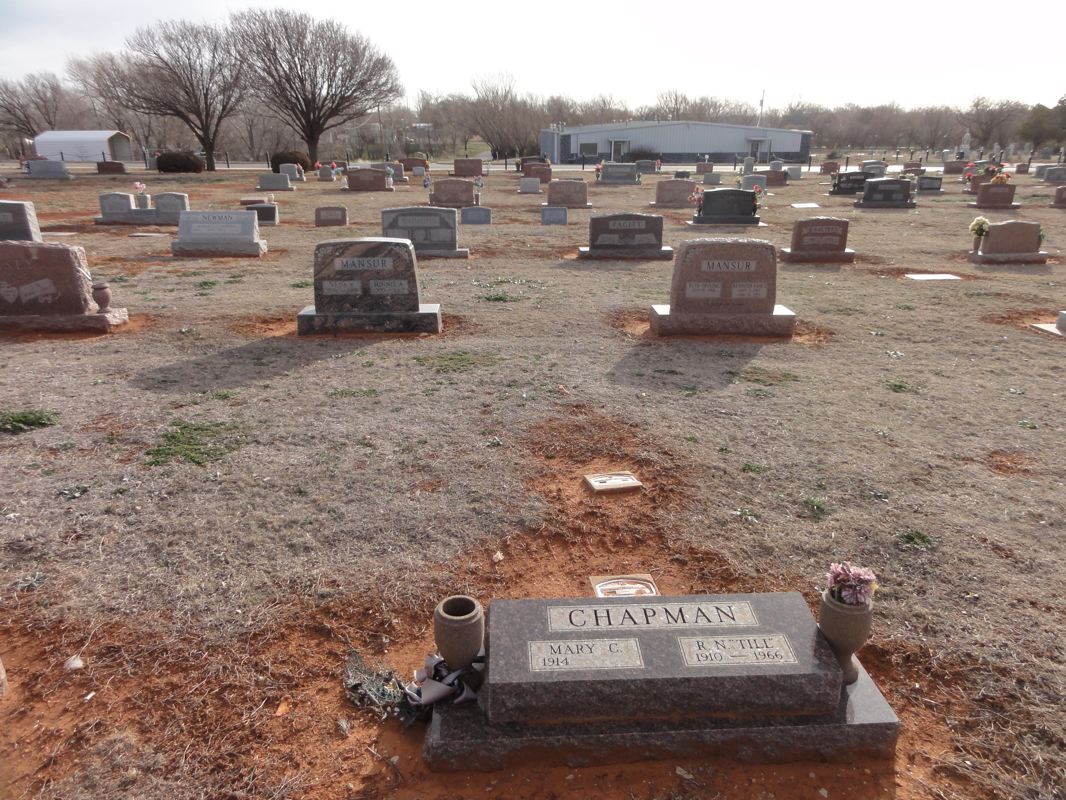 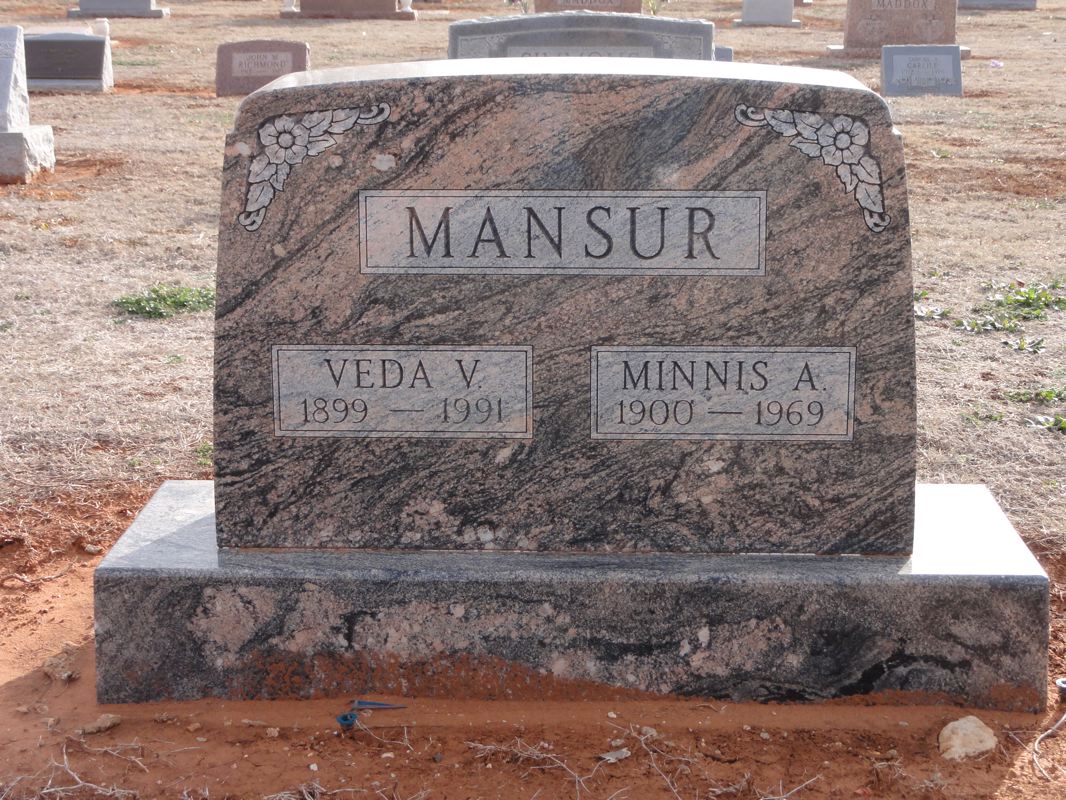 Web editor note: In February, 2012, it was my privilege to visit the grave of M.A. Mansur. I was invited to take part in the annual Affirming The Faith Lectureship in Oklahoma City, Oklahoma. Getting into the area early, I was afforded the opportunity to put about 2000 miles on a rental car in order to locate graves of gospel preachers and church leaders of yesteryear in a wide area. My second day I was able to visit the grave of M.A. Mansur.