Brief Sketch on The Life Of Chas E. Holt

Charles began preaching at the age of 19 at Mt. Hope, Wayne County, Tennessee. He baptized several members of his family there from 1881-1886. After beginning his preaching career in Tennessee, he moved to Florence, Alabama in 1905 where he served as minister of the Poplar Street Church of Christ (Now Wood Avenue) for six years. Then he moved to Montgomery, Alabama where he was minister for the Catoma Street Church of Christ for six years. After this he moved to Knoxville, Tennessee, and served at the Broadway Church of Christ for two years. He then moved back to the Shoals area of Northwest Alabama and settled in Florence, where over the rest remainder of his life he engaged in evangelistic work. He held meetings in Alabama, Mississippi, Texas and Tennessee.

Brother Holt was a good writer and reporter through the years. For a few years he wrote a column in the Christian Leader entitled, Notes and Sermons. He also was a regular contributor to the Gospel Advocate. While in the Knoxville, Tennessee area he edited a paper called the Knoxville Evangelist which was published by the Broadway church. In later years he contributed to a Nashville daily paper entitled "Religion In Life." He submitted a religious story for publication entitled, Evidence Of Pardon, McQuiddy Publishing Co., Nashville, Tennessee.

He was preceded in death by his wonderful wife, Martha, February 17, 1939. He delivered his last sermon at the old Stoney Point Church of Christ in Lauderdale County, Alabama in July 1942. He passed from this life September 4, 1942. His body was returned to his home of Tennessee for burial in the Mimosa Cemetery in Lawrenceburg. In all, he served as a minister Lord's Vineyard for 60 years.

-Most of this sketch was produced from notes provided by Charles and Martha's granddaughter, Charleen Miles of Florence, Alabama, September, 2004.

Location Of The Grave Of Charles E. Holt

Charles E. Holt is buried in the Mimosa Cemetery, Lawrence County, Tennessee. Going into Lawrenceburg from Florence, Alabama on Hwy 43, turn east on Hwy 64 toward Pulaski. Go about 1/4 mile and the cemetery is on the right.

As you turn into cemetery you are right in the center of it. Go about 40 or 50 feet and to the left is a circle, oval area, W.F. Wall is buried on the left. Charles E. Holt's grave is back to the west of this area.

While in the cemetery be sure to visit the graves of W.F. Wall, J.H. Stribling, J.T. Harris and O.E. Coffman. Also J.D. Vaughn, owner of Southern Gospel Singing and Publishing Co. that has produced many church songs. 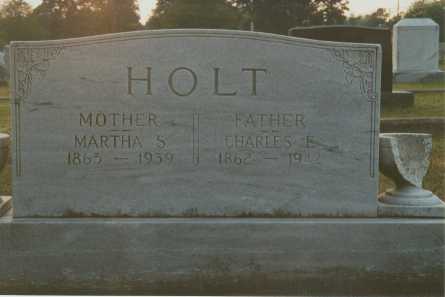 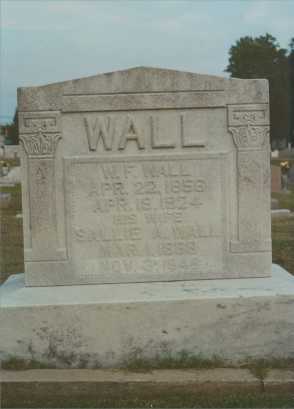 Elder In Lawrence
County, TN
And Friend To C.E. Holt

Note Of Thanks: Thanks to C. Wayne Kilpatrick for providing information and photos for this page.