One day in 1848, a pioneer preacher appeared in the area (Hall's Valley, near Trion, Georgia). He was Rees Jones of Calhoun, Tennessee, a blacksmith and one of a number of itinerant preachers who had been greatly influenced by Barton W. Stone. His message resonated in the hearts of many of the settlers, including Sewell Hall's ancestors, who soon formed a congregation.

Jones was called, "one of the first and most faithful and self-denying pioneers in the restoration of the Bible as the Will of God." (James E. Scobey, Franklin College and Its Influence, p. 11, 12. Quoted by Earl Kimbrough, "Long Legs and Short Breeches" The Alabama Restoration Journal, Vol. 1, No. 2, March, 2006, p. 15.) He was known for mistakenly telling Tolbert Fanning that he wouldn't make it as a preacher and should "go into something else." (Kimbrough, p. 15.) He was a companion of T. W. Brents' on preaching expeditions through Tennessee. Brents mentioned him in several of his reports to the Gospel Advocate. (T. W. Brents, Letter to the Gospel Advocate, "Gospel Advocate" Vol. 2, No. 12, December, 1856 p. 368. T. W. Brents, Gospel Advocate Vol. 4, No. 10, October, 1858, p. 318.)  Jones wrote articles in the Gospel Advocate, including a long, complex one in July 1869 that defended the "moral influence" theory of Christ's atonement, a concept promoted by Barton W. Stone. (John Mark Hicks "What Did Christ's Sacrifice Accomplish? Atonement in Early Restorationist Thought." Inaugural Lecture at Restoration Theological Research Fellowship, Society of Biblical Literature Conference, Chicago, IL, Nov. 1994, February 25, 2005.) Brent's biographer, John B. Cowden, said that his father told him, "Reece [sic] Jones converted and baptized most of the pioneer Disciples in Middle Tennessee." Cowden added,  "Reece Jones is another pioneer preacher who has dropped out of history and tradition, who should be restored." (John B. Cowden, Dr. T. W. Brents, (Nashville, Tennessee, John B. Cowden, 1961) p. 25.) He lamented that none of Jones' contemporaries wrote a biography of him.

The online history of the Old Philadelphia church in Warren County, Tennessee says that Rees Jones, who first preached to Sewell's ancestors in Georgia, was an itinerant preacher who often preached there. (James A. Dillon "Old Philadelphia Church." February 25, 2004  www.therestorationmovement.com/oldphilhist.htm.) The Old Philadelphia church building is on a beautiful knoll facing the Cumberland Plateau near McMinnville, Tennessee and is a nice place to visit.  Jones had a son, Isaac ("Captain") Jones, who was active in the churches and lived his last years in Manchester, Tennessee. (J. W. Grant, The Reformation History of Tennessee, unpublished in David Lipscomb University library, 1897).  The Manchester, Tennessee church of Christ had information about Rees and Isaac Jones on their web page in 2006. ("Historical Brief of East Fort and East Main Street Church" March 20, 2006, http://www.mainstreetcofc.org/page2.html) The two Jones along with Jesse L. Sewell,  William Davis "Pap" Carnes "are credited with initiating the work in Manchester." (http://www.mainstreetcofc.org/page2.html) Rees Jones had a sister named Eliza Fuston who was born on June 1, 1815 and died April 29, 1906. (Obituary "Eliza Fuston" Gospel Advocate, May 16, 1907, p. 319.) She said that she was not a "Campbellite" because she was a Christian long before she ever heard of Alexander Campbell.
J.D. Floyd wrote an article in the Gospel Advocate in 1911 reminiscing about Rees Jones. (J.D. Floyd "Recollections of Rees Jones" Gospel Advocate, February 6, 1911, p. 164.) He said, "A more tenderhearted man I never met. When he was in a reminiscent mood, he would speak of his early co-laborers in the gospel, while tears would chase each other rapidly down his furrowed cheek." Jones told Floyd that Gilbert Randolph, who also worked with Sewell's ancestors in Hall's Valley, had "one gift he never saw in another man. He could get up after another had preached and at once go into a warm, pathetic exhortation." Floyd said that Jones had a "warlike style of preaching" which he attributed to the hard life Jones had, and the persecution he suffered at the hands of opponents in denominations.

Jones published a short-lived paper in Shelbyville, Tennessee called the Gospel Herald with J.C. Elliot in the late 1850's, (Tolbert Fanning, "New Papers" Gospel Advocate, Vol. 6, No. 7, July, 1860, p. 218.) but Floyd said he knew of no surviving copies in 1911. He also wrote a tract on the operation of the Spirit. Floyd remembered reading it but said he knew of no surviving copies. He said, "The present generation, reading his description of the Spirit's operation in a camp-meeting revival, would regard it as a gross caricature, but the older people who were eyewitnesses of these things would see the justness of the same." (Floyd.)

Earl West mentioned Rees Jones in his book, The Life and Times of David Lipscomb.  He tells of Lipscomb's visit to Calhoun, Tennessee (near Cleveland) evidently in December 1896.

"This was the hometown of old Rees Jones, one of the early Tennessee preachers that Lipscomb knew about when he was a boy.  Jones was not only a preacher, but a blacksmith. Some of the brethren took Lipscomb around and showed him the blacksmith shop where Jones had worked many years before." (Earl Irven West, The Life and Times of David Lipscomb, (Delight, Arkansas Gospel Light Publishing Company, reprint 1987) p. 254.).

Editor's Note: Special thanks to Gardner Hall for writing this article. His thrust in the article was to paint a background of restoration work done among churches of Christ in north Georgia's Hall Valley. In the process he gave a wonderful picture of the life of the great restoration preacher, Rees Jones.

Criticism Of A Publication by Rees Jones 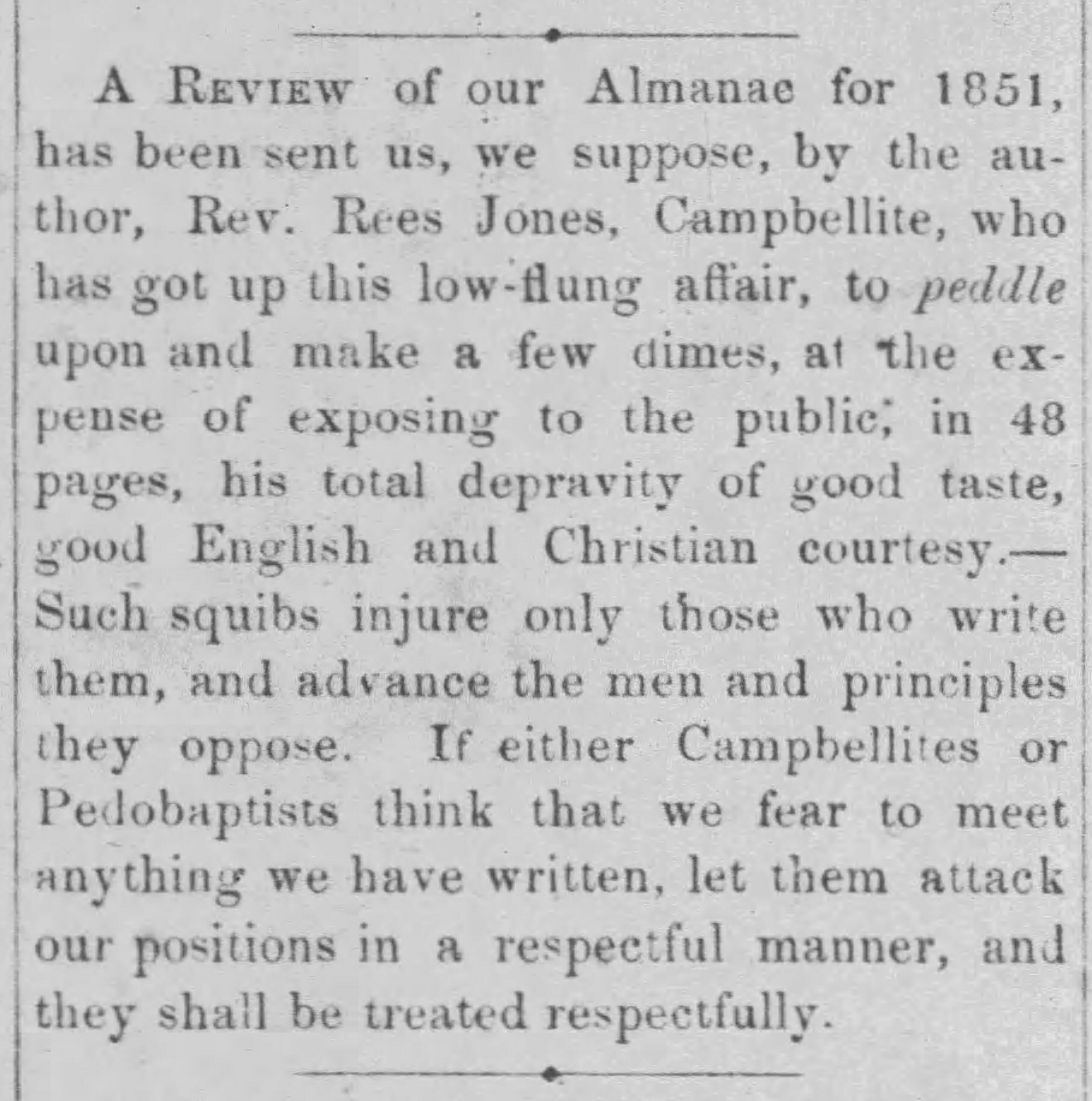 Rees Jones is buried in Manchester, Coffee County, Tennessee in the Manchester City Cemetery. On I-24 in South Central Tennessee, the city of Manchester has three exits. Any of these can be taken, and then one can head toward town. The old cemetery is not on the main road. Get to Hwy. 41 / Murfreesboro Hwy. If heading north on 41 take a left on W. Fort St. Then, immediately turn right on N. Church St. Then left on W. High St. The cemetery will be on your right. Very close to the street in the oldest part you will find the old marker of Rees Jones. It is located just in front of a tall, maybe 5 or 6 ft. Woodman of the World marker with the name William Mahathey. The Jones monument is fading quickly.

When I found this grave, it was the second time I'd been to and through the cemetery. The first time I walked all over it and could not find it. The second time, this time in 2021, I had looked at (Find-A-Grave) and noticed someone had located and posted it. Made the second search much easier. 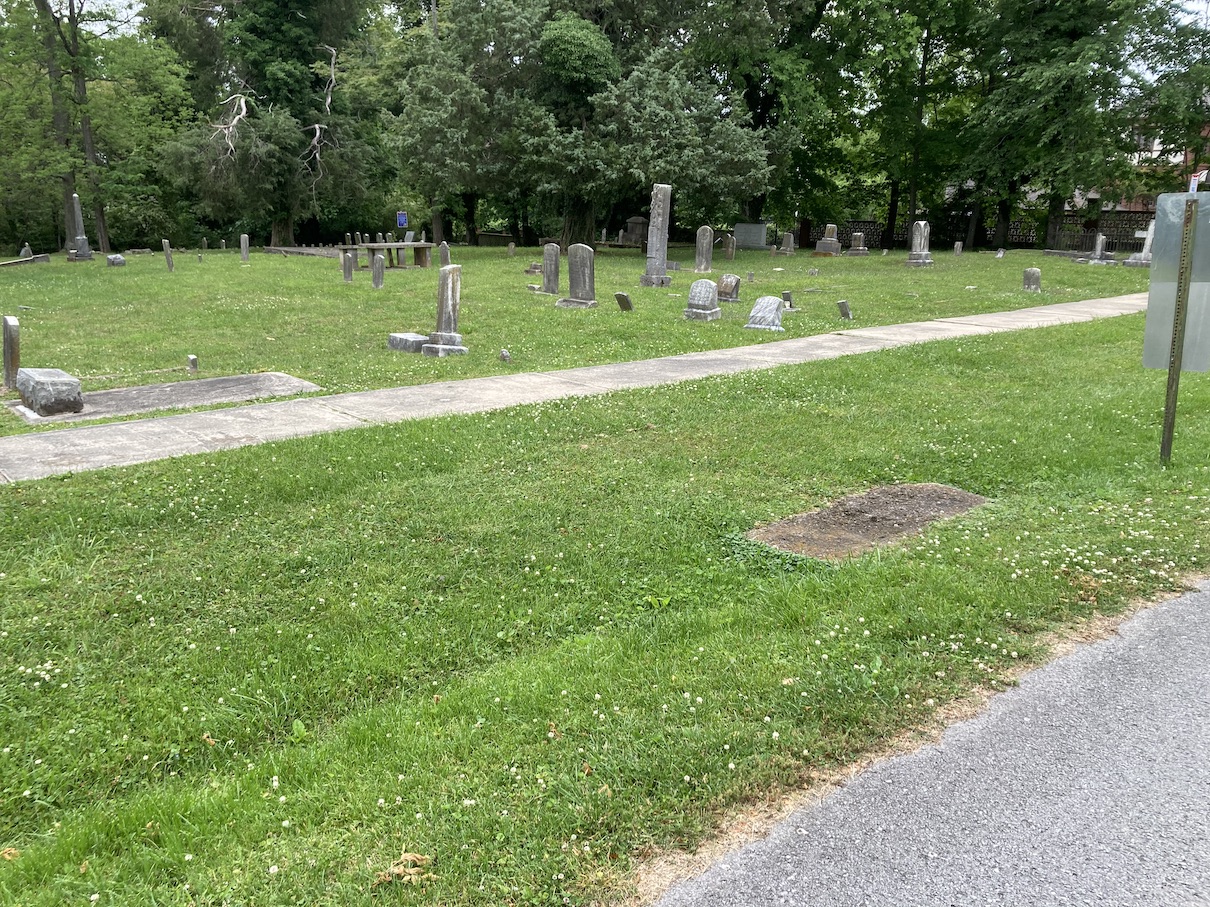 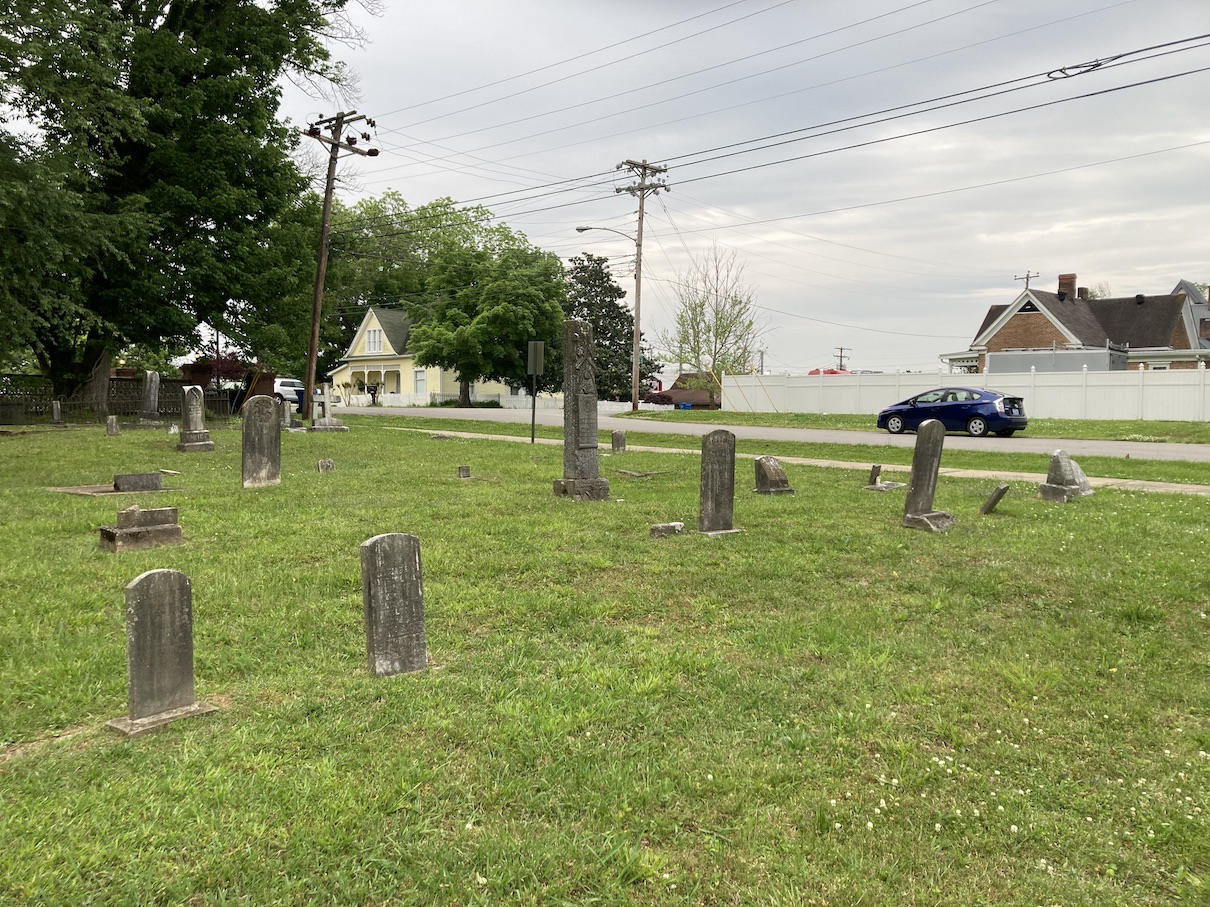 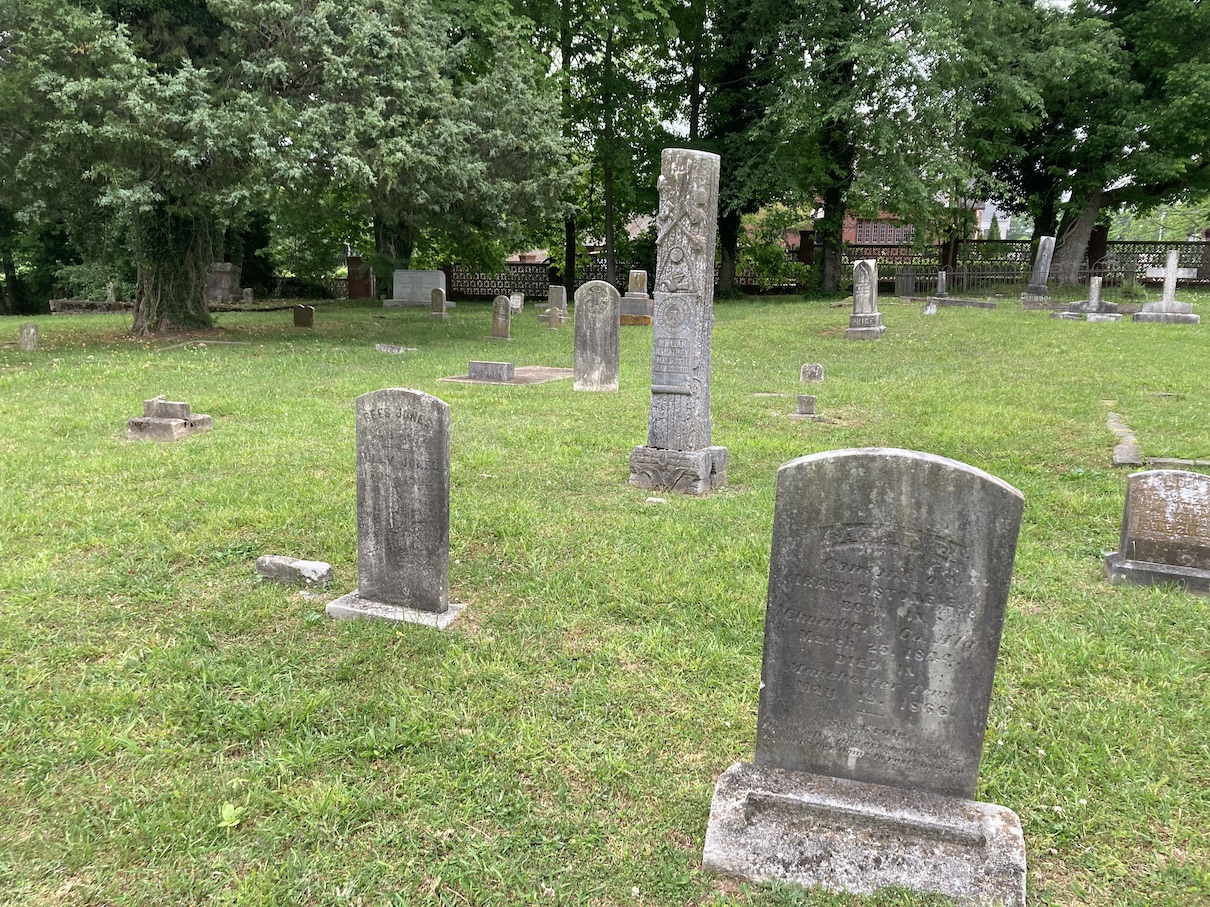 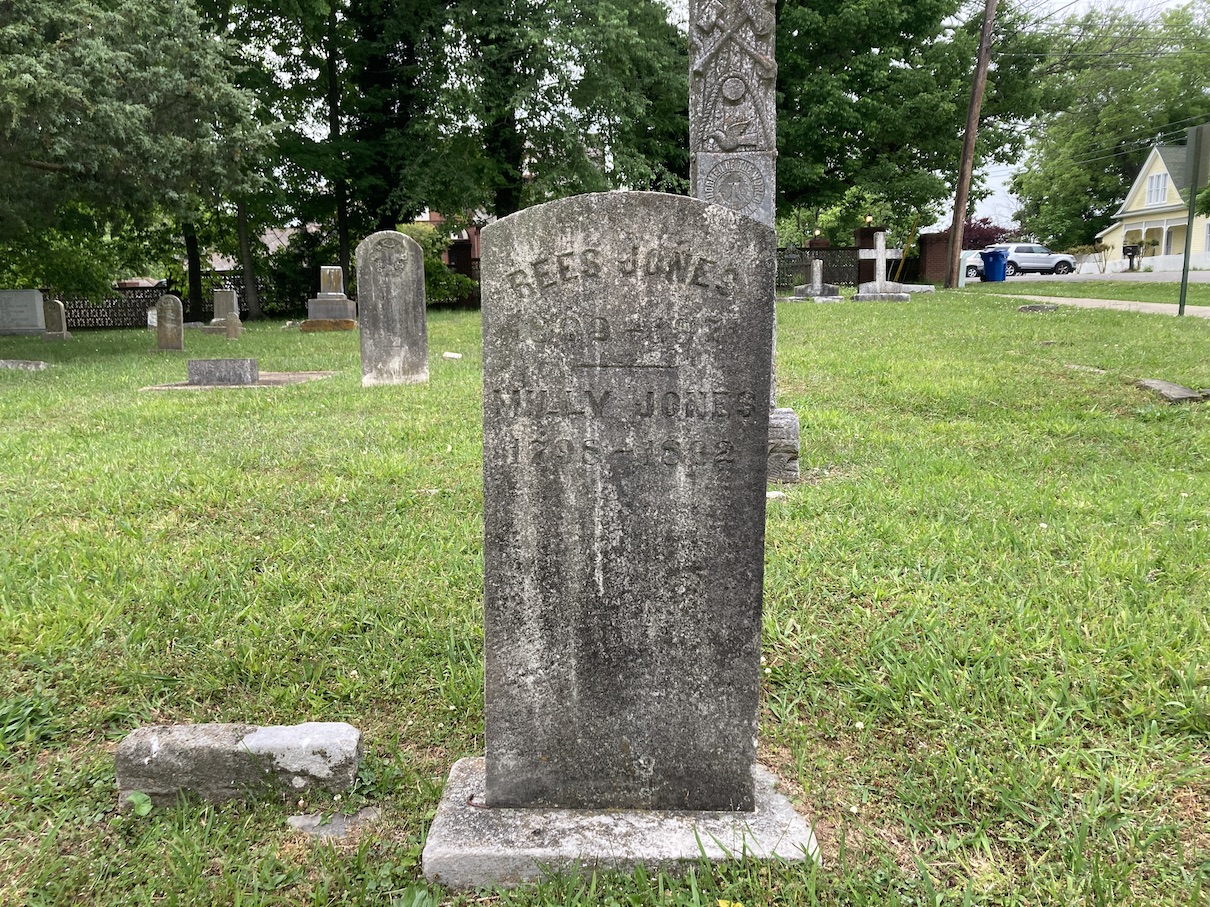 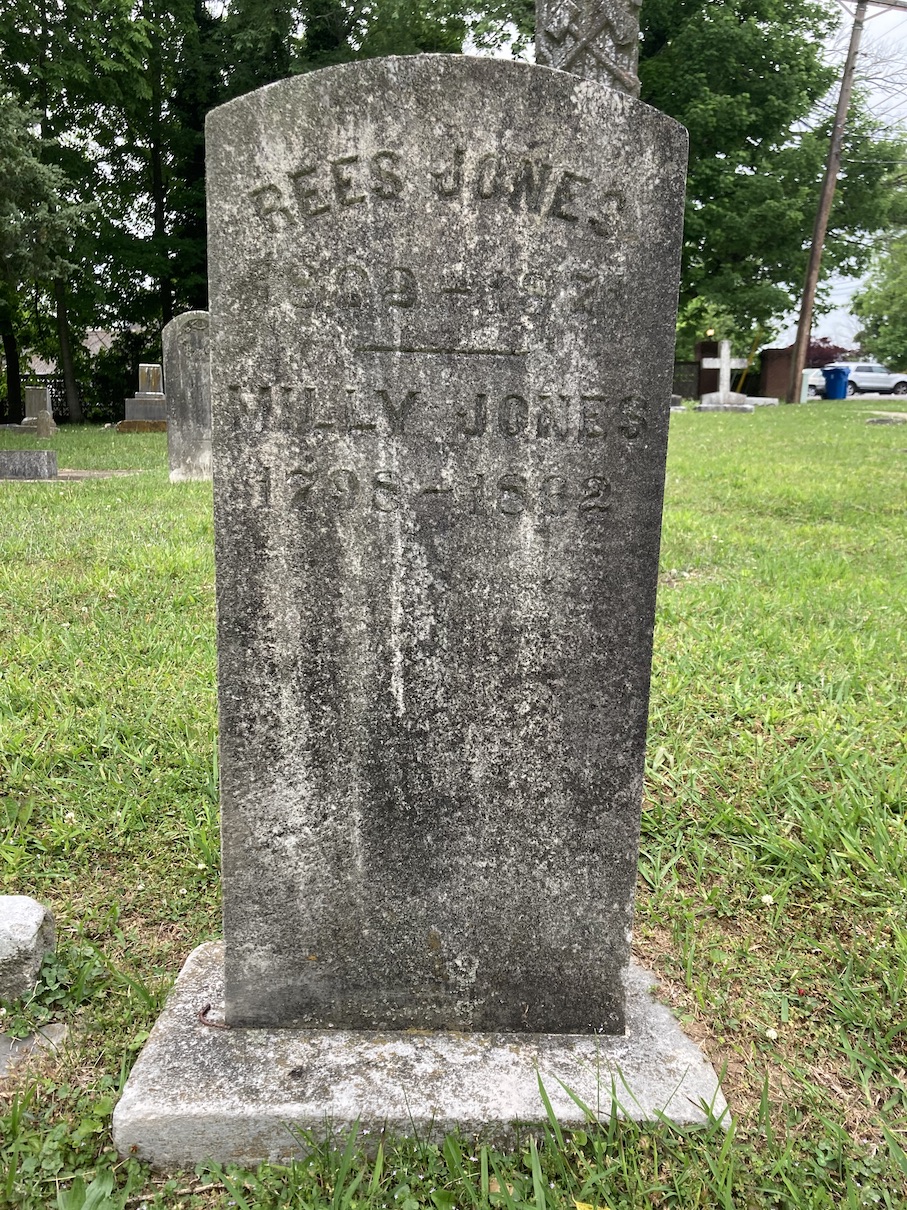