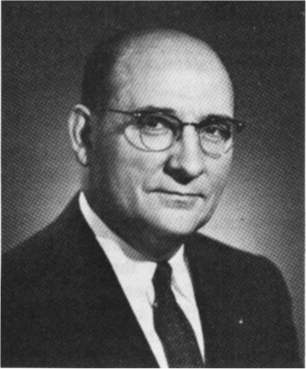 When Athens Clay Pullias became president of David Lipscomb College in 1946 at the age of thirty-five, he was one of the youngest college heads in the country. Twenty years earlier he had preached his first sermon at fifteen. At the age of twenty, he was admitted to the Tennessee State Bar by special act of Chancery Court removing his age disability. Today at forty-five, still one of the country's younger college presidents, he devotes his talents and energy to the service of youth, to the end that other young people may have the same opportunity for Christian education and leadership that he has enjoyed.

In Athens Clay Pullias is a rare combination of abilities and preparation that peculiarly fit him to head a growing Christian college in an age when more and more young people are finding it possible to attend college. First of all, he is a great evangelist and his first and foremost purpose in life is to advance the cause of Christ. For thirteen years he was minister of one of Nashville's largest congregations, the Charlotte Avenue Church of Christ, and since giving up local work to become Lipscomb's president he has continued to preach in ten meetings each year and also to devote twenty-six Sundays to speaking for congregations throughout the country as visiting evangelist.

Third, he is a scholar and educator, beloved by Lipscomb students privileged to study Bible under him, and highly respected in educational circles throughout the country. Before becoming president, he was professor of Bible and head of the department at Lipscomb, and as long as he is in charge of the College, the Bible will remain the most important subject taught. Born in Castalian Springs, Tennessee, where his parents, Mr. and Mrs. J. G. Pullias, still live, he is a member of a family of distinguished educators and preachers. His uncle, C.M. Pullias, now in Texas, has been preaching for sixty years, has held hundreds of meetings, and has spoken on many lectureships. A brother, Earl V. Pullias, is dean of George Pepperdine College and is also a well-known evangelist. Another brother, I. C. Pullias, presently preaching for the church in Fayetteville, Tennessee, has been preaching since 1917 and was for twenty-one years a public school administrator and teacher in Tennessee.

It was in the family tradition that Athens Clay Pullias should go to David Lipscomb College. Since 1913 a Pullias has been a student, staff member, or in some way connected with the College. After graduating from Lipscomb (then a junior college), he continued his studies at Cumberland University, where he received both the B.A. and LL.B. degrees. While a student there, he met and married the former Mary Frances Newby of Lebanon, Tennessee, a woman of great charm and talent as well as spiritual qualities. Mrs. Pullias is a graduate of Lipscomb (and also of Peabody and Ward-Belmont Colleges), and their son, Clay, Jr., seven, now carries on the tradition as a second-grade pupil in Lipscomb Elementary School. From Cumberland, Pullias went on to Vanderbilt University, where he received the B.D. degree.

In 1944 he was placed in charge of the Lipscomb Expansion Program launched in October of that year for the purpose of developing the school into a four-year college. The first senior class was graduated in 1948, and by 1952, more than $3,000,000 had been raised under his leadership. Lipscomb is now fully accredited as a senior liberal arts college by the Southern Association of Colleges and Secondary Schools.

The Gospel Advocate has been an honored visitor in his parents' home and in his own all of his life, and copies are placed in all student mail boxes at Lipscomb. It was a happy occasion for Pullias when the Advocate launched its centennial anniversary drive for 100,000 new subscribers at the Lipscomb Winter Lecture Series last January. His membership in the GA 500 Club, therefore, will be ranked by him with the many other high honors that have come to him as a distinguished Christian educator.

Athens Clay Pullias ended one of the longest college administrations in the nation, and the longest tenure in the office for any college supported by members of churches of Christ, in his retirement as president of David Lipscomb College on August 31, 1977.

The Board of Directors had previously voted unanimously its full confidence in his leadership and accepted with regret his request for retirement after serving thirty-one years as Lipscomb's president. In a statement issued immediately after this action, the chairman of the Board said:

''It is with regret that we accept the request for retirement of Athens Clay Pullias from the presidency of David Lipscomb College. For the many years of sacrificial service he has given this institution, we are grateful.

"It can be said truthfully that David Lipscomb planted, A. M. Burton watered, and Athens Clay Pullias gave the increase. We wish him and his family a happy retirement."

The Board of Directors also voted unanimously to name Pullias president emeritus and adopted a resolution commending him for his long service to Lipscomb. In connection with the announcement of then President Pullias' retirement, he made the following statement:

"I want to express sincere appreciation to the Board of Directors, faculty, students, alumni and others for the privilege of serving here at Lipscomb for more than forty-three years.

"I especially wish to pay triqute to the late A. M. Burton, without whose generous gifts and labors this institution would not be in existence today.

"I appeal to all those who have supported Lipscomb in the past to continue their efforts to strengthen and maintain the institution. The highest contribution that each of us can make to the present welfare and future prospects of David Lipscomb College is for each to do well his or her work from day to day. Whatever the future brings, this is the course of both honor and wisdom.

"Administrators come and go, but the college remains forever young. The halls of Lipscomb will continue to be filled with the laughter, hopes and dreams of young people through all the years to come. It is for them that the school was built, and it is for them that it should be operated.

"I will do my very best during the period of transition to be helpful."

Former Vice President Willard Collins was named by the Board of Directors to assume the presidency September 1, 1977. His statement on being informed of this action follows:

"I feel very humble in accepting the Board's appointment as president of David Lipscomb College, and I realize I face tremendous problems that are common to higher education.

"The record of former President Athens Clay Pullias will never be equalled, according to my sincere judgment.

"His administration will go down as the 'Golden Years of Growth' for Lipscomb. I have known President and Mrs. Pullias since 1934, when I became a student at Lipscomb. They have been gracious, kind and helpful through the years.

"I appreciate the confidence the Board of Directors has placed in me in naming me president of Lipscomb, and I am happy to work under its authority."

Excerpts from the resolution of commendation unanimously adopted by the Board expressing "profound gratitude for the forty-three years of Pullias' dedicated service to David Lipscomb College and his lifetime consecration and devotion to our Lord and to Christian education," follow:

"WHEREAS, Athens Clay Pullias has served David Lipscomb College as teacher executive assistan.t, chairman of the Department of Bible, vice president and as its president longer than any other president; and . . .

"WHEREAS, he has increased the number of full-time faculty members holding the earned doctor's degree from one in 1944 to sixty-four in 1977, 61.5% of the present fulltime faculty, developing a system of tenure retirement, insurance and other fringe benefits designed to benefit the permanent faculty with security and stability; and . . .

"WHEREAS, he has been recognized as an outstanding evangelist among churches of Christ since 1926; and . . .

"WHEREAS, he has been a practicing attorney since 1930, specializing in the field of taxes, wills, estates, and trust funds; and

"WHEREAS, he has further distinguished himself in our state and community as an educator, college administrator, and financier; and . . .

"BE IT RESOLVED, THEREFORE, that the Board of Directors hereby expresses its appreciation and admiration for his unblemished and selfless record of service to David Lipscomb College and his example of usefulness in His Kingdom."

The esteem with which former President Pullias is regarded throughout his home state of Tennessee is evident from editorials that appeared in The Tennessean and The Nashville Banner following the announcement of his retirement.

Copies of these editorials as they appeared in these newspapers are included in this announcement to the readers of the GOSPEL ADVOCATE.

A full announcement of the appointment of President Willard Collins to succeed former President Pullias will appear in an early issue of the Advocate.

Dr. Athens Clay Pullias has been identified with David Lipscomb College for so many years that even in his retirement both names will remain linked together. Dr. Pullias will retire Wednesday as president of the college. In terms of longevity, the years are impressive: more than forty-three years of service to Lipscomb, thirty-one as its president. But a record is better measured by accomplishments. Under his leadership, beginning in 1944 and continuing when he became president two years later, the Lipscomb Expansion Program has raised a total of more than $22 million. This has seen Lipscomb rise to senior college status, achieving accreditation by the Southern Association of Colleges and Schools and other educational associations. 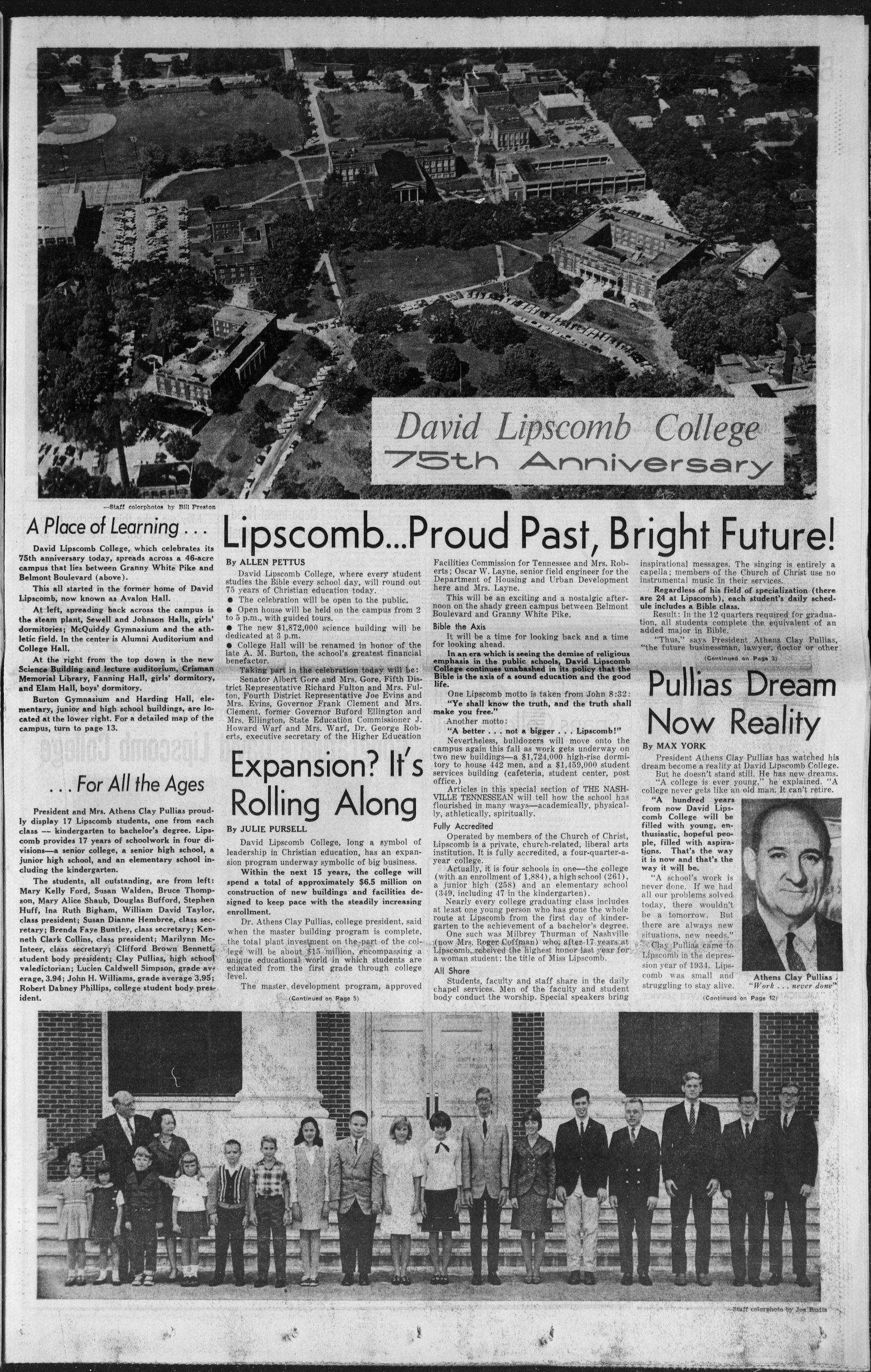 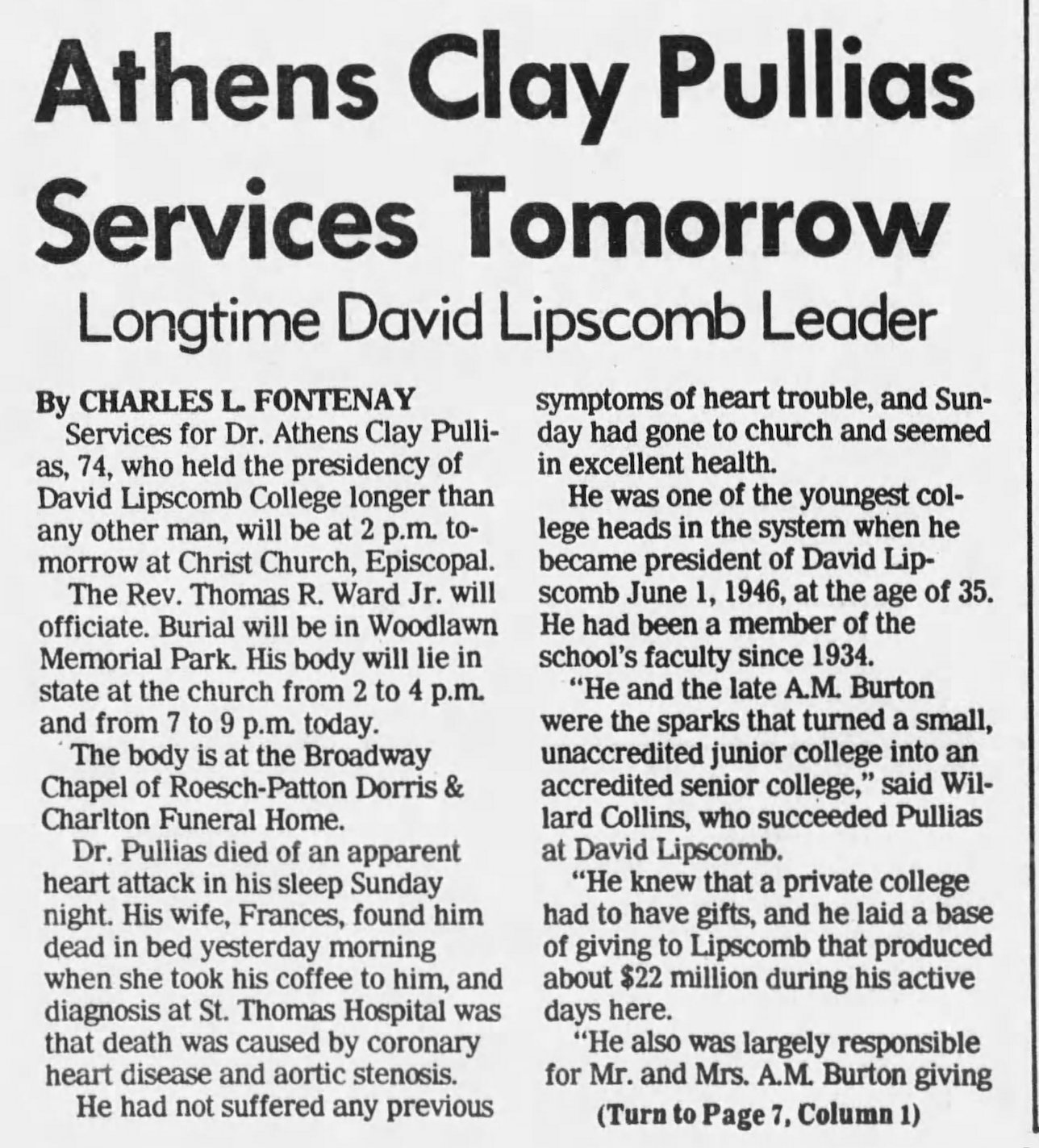 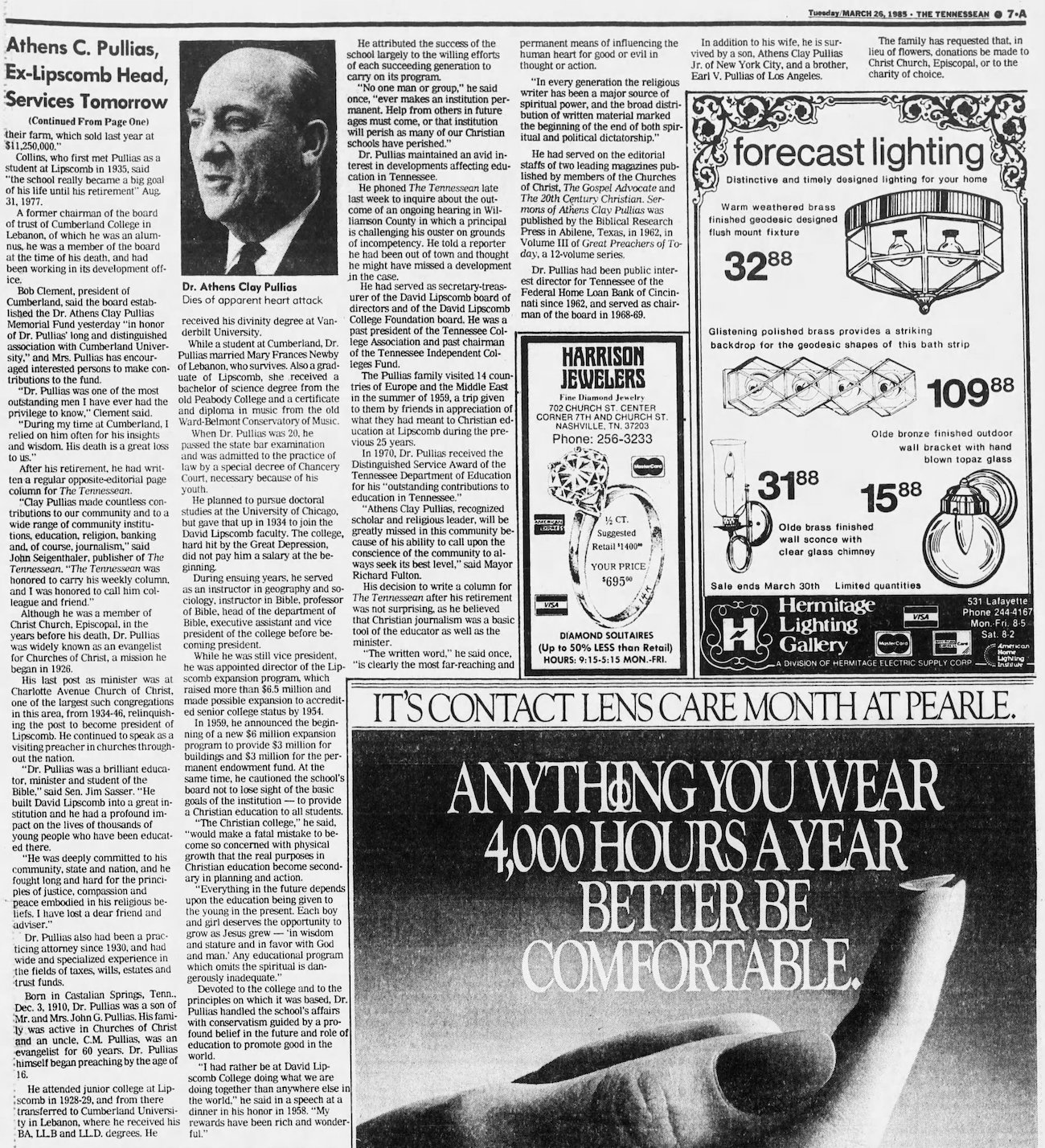 Directions: Woodlawn Cemetery, Nashville, Tennessee, is located behind the 100 Oaks Shopping Center that faces I-65 just south of the I-440 Interchange. From 100 Oaks travel east on Thompson Lane and turn right at the first entrance to Woodlawn's South Side Park (across from main part of cemetery). Take the first left and road bears around to the right. You will pass the first intersection, then Graceland on your right. Look for the next section to the right, Terrace Garden, and head toward the middle of the section. Looking to the south you will see two hedgerows with a birdbath between the sections. Centering youself with the birdbath, count back north from the hedgerows ten rows and look to your right to find the grave. 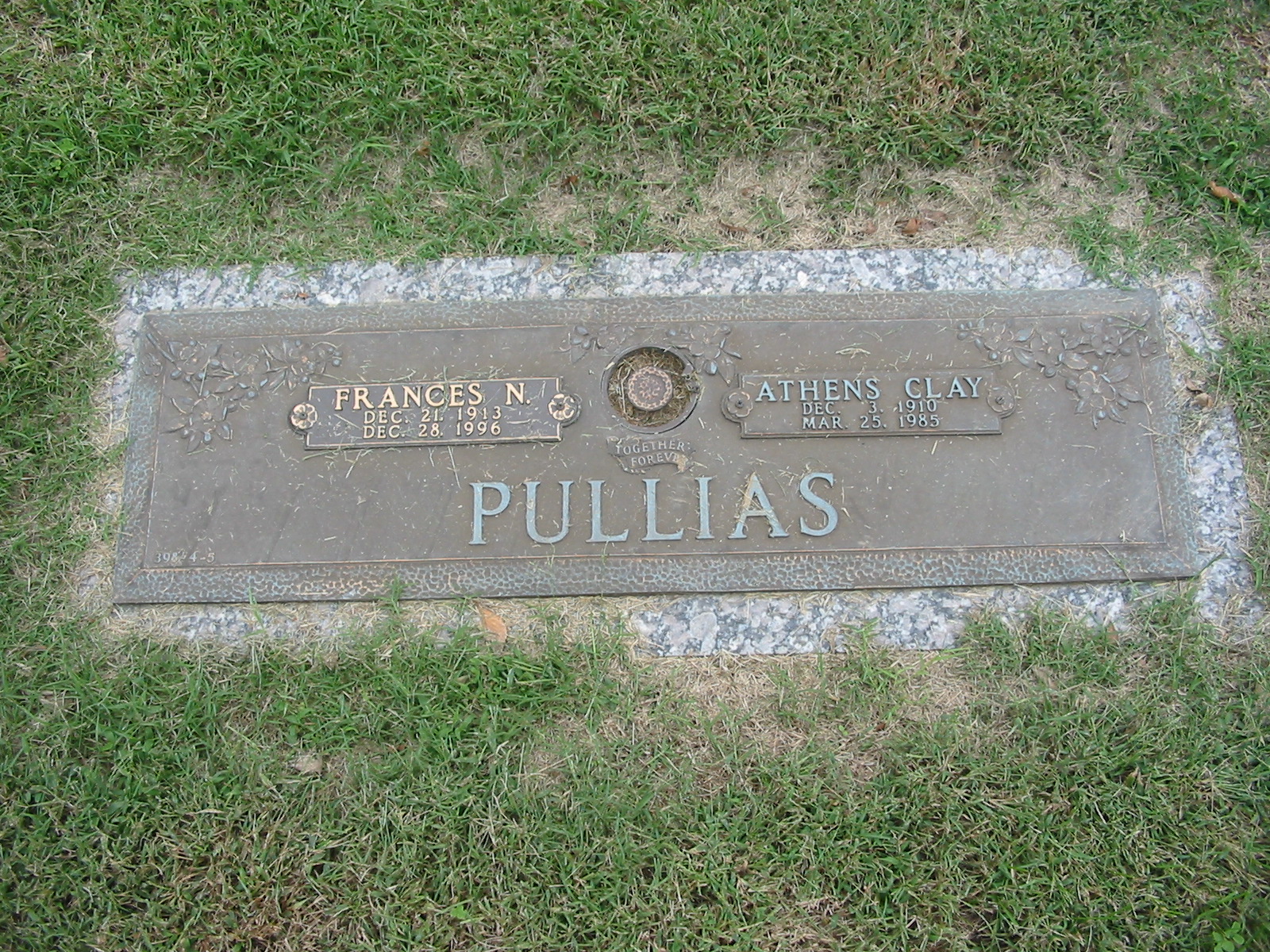