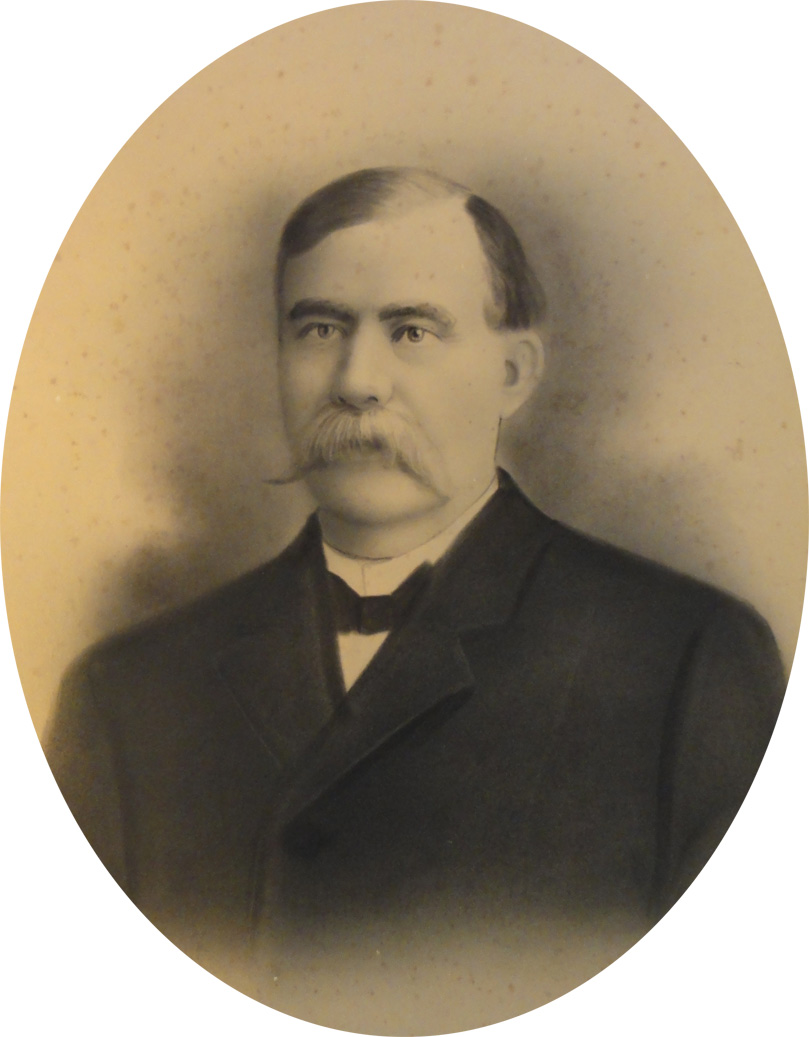 Biographical Sketch Of The Life Of
William Howard Sutton

Some one has said that "the great man is he who does not lose his child's heart." The truth of this statement is verified in the life of William Howard Sutton; he never lost his "child's heart" in humility and simplicity of life. He was greatly loved because he loved with a great heart his fellow mortals. 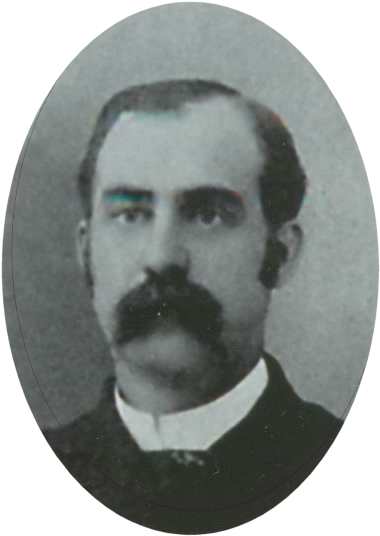 William Howard Sutton was born near Trenton, Ga., in Dade, County, on August 21, 1852. He became a Christian while in his “teens”–in the seventeenth year of his age. He heard the sweet story of the cross and of God's love for man; he heard and learned the plan of salvation and accepted it with all the fullness of his young and tender heart. In his early life he thus consecrated himself to the Lord and lived true to that consecration. His constant aim and steady purpose was to live the Christian life.

He began teaching school at the age of eighteen and was a success from the first. At the age of nineteen he entered school at Manchester, Tenn. At that time that prince of educators in the upland country, W. D. Carnes ("Pap" Carnes), was teaching at Manchester. Brother Sutton remained under his efficient instruction for several terms. He next took a business course in Cumberland University, Lebanon, Tenn., and afterwards taught in the business department of that school. Later the business department of Cumberland University was consolidated with that justly famous institution called “Bryant and Stratton's Business College," Nashville, Tenn. When this consolidation was perfected, Brother Sutton became a teacher in that college. He continued as a teacher in this college for some time.

On January 27, 1875, he was married to Miss Ella Faulkner, of Lebanon, Tenn., while teaching in Nashville. Soon after his marriage he was called to his old home in Georgia to take charge of a literary school. After teaching there for a while he formed a partnership with Judge Shackleford and established a business college in Chattanooga, Tenn. In 1881 Brother Sutton accepted a professorship in Burritt College, Spencer, Tenn., and taught in that college nine years. In 1887, while teaching in Burritt College, he was asked to take the place of president of the college. He did so, succeeding Prof. A. G. Thomas, who had held the presidency of the college for only one year. Brother Sutton continued as president of the college for two years, resigning in 1889, and the lamented W. N. Billingsley was elected president to fill the vacancy made by the resignation of Brother Sutton.

While Brother Sutton was teaching in Burritt College he saw the need of preaching the gospel to the people in that mountain country. Many of them had heard but little preaching, and that which they had heard was so mixed with tradition and error that they did not understand the Bible and the way of salvation. Brother Sutton’s heart yearned for their spiritual welfare, and he preached the word of God to them for the sake of doing them good. He received little or nothing for his preaching among them. He was prompted by the lofty motive of saving souls. He also preached to the college students and the congregation in the town. He did not think at the time that he would give all of his time and energy to preaching the gospel, but preached from a sense of duty and a love of the salvation of souls. As he developed as a preacher, demands for his services became so numerous, and he felt so keenly his responsibility to preach the gospel that he finally decided to give up his position as president of Burritt College and devote his whole time to preaching the gospel. When freed from the responsibilities of the college, he dedicated himself to preaching and consecrated his life to that work, and few men ever accomplished more in the same length of time in the counties where he labored than did W. H. Sutton. 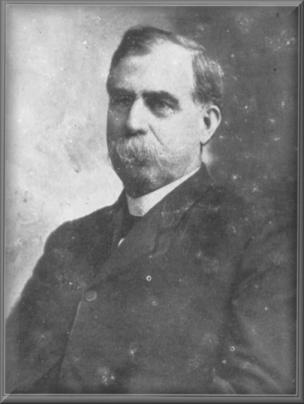 For sixteen years Brother Sutton preached and held protracted meetings without a vacation. Through the strong solicitation and earnest persuasion of the church at Sparta, Tenn., he moved from Spencer to Sparta, and the church there had fellowship with him in his preaching until his death. The church at Sparta bought a tent, and Brother Sutton went out and preached under the tent where there were no congregations or houses of worship. Brother Sutton, by the power and simplicity of the gospel, converted sinners to Christ, established new congregations, and strengthened the weak churches in that country. His labors were confined generally to White, Putnam, Warren, Van Buren, and adjacent counties. He held successful meetings in Nashville, Chattanooga, Murfreesboro, Lebanon, Fayetteville, and many other towns. Frequently he was called to other States, but he preferred, as he said, to preach in the destitute fields where there was greater need.

Brother Sutton was educated and refined. He loved the truth of God and loved to preach it. He preached acceptably to the most intelligent and refined congregations; he also preached to the less cultured with that simplicity which enabled them to understand and accept the terms of salvation. His delivery was pleasant, his appearance in the pulpit attractive, his bearing dignified, and his influence as an exhorter unexcelled. Out of the pulpit be was a kind, gentle, and lovable man, and he had friends because he showed himself friendly. He was prudent in his association with others and considerate of their happiness. He was courageous and not afraid to speak the truth with firmness. He always preached the gospel in a clear and forceful manner. His arguments were logical and convincing, and his exhortations and persuasions were almost irresistible. His message came from his heart and reached the hearts of his hearers. He had few equals in the pulpit. He was successful in converting sinners and in building up the church. He could console and counsel, encourage and reprove, instruct and warn, with humility and love, so that all who came under his influence were blessed.

Brother Sutton was in a meeting at Algood, Tenn., in 1905. He had been preaching there day and night for one week. Soon after nine o'clock on the second morning of the second week of the meeting, July 9, 1905, he was suddenly stricken and died immediately. His body was taken to Sparta and laid to rest there. A large multitude assembled to pay tribute to the memory of this great man of God. Every one who knew him called him "Brother Sutton." He had a kind word for everybody and his friends were numbered by his acquaintances. For the length of time that he lived, labored, and loved, possibly no other man even did more good than did Brother Sutton. Many who were blessed by this good man are still living and cherish sacred memories of him.

Directions To The Grave Of W.H. Sutton

William Howard Sutton is buried in Highland Cemetery in Sparta, Tennessee. I visited the cemetery in June, 2002. In Sparta, from the west travelling east on Hwy. 70, (E. Bockman Way) pass the White County Courthouse on the right. Go another mile and turn right on S. Highland Dr. When we were there the Sparta Police Station was on this corner. Follow S. Highland Dr. through to the end, (3 or 4 blocks). You will enter the cemetery, and going up a hill you will take your first right. As you travel this direction begin looking to your left for the tallest monument in the cemetery. The tall monument in the middle of the cemetery is the Sutton monument. 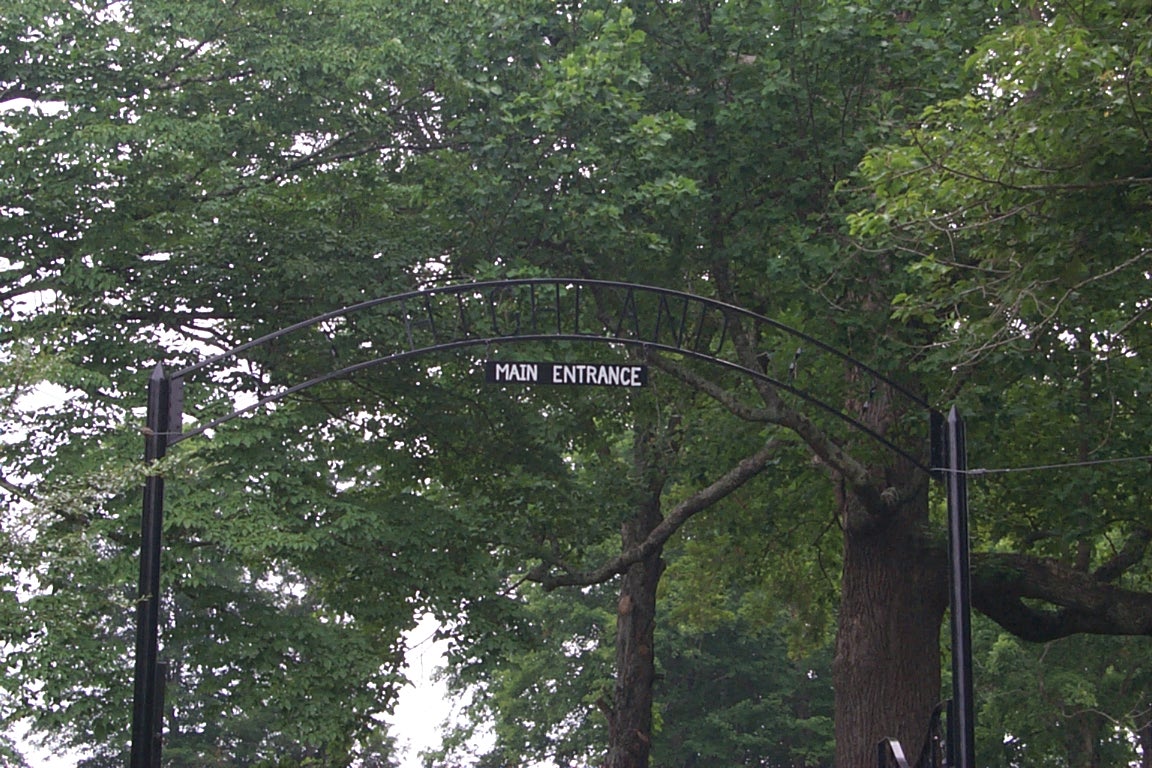 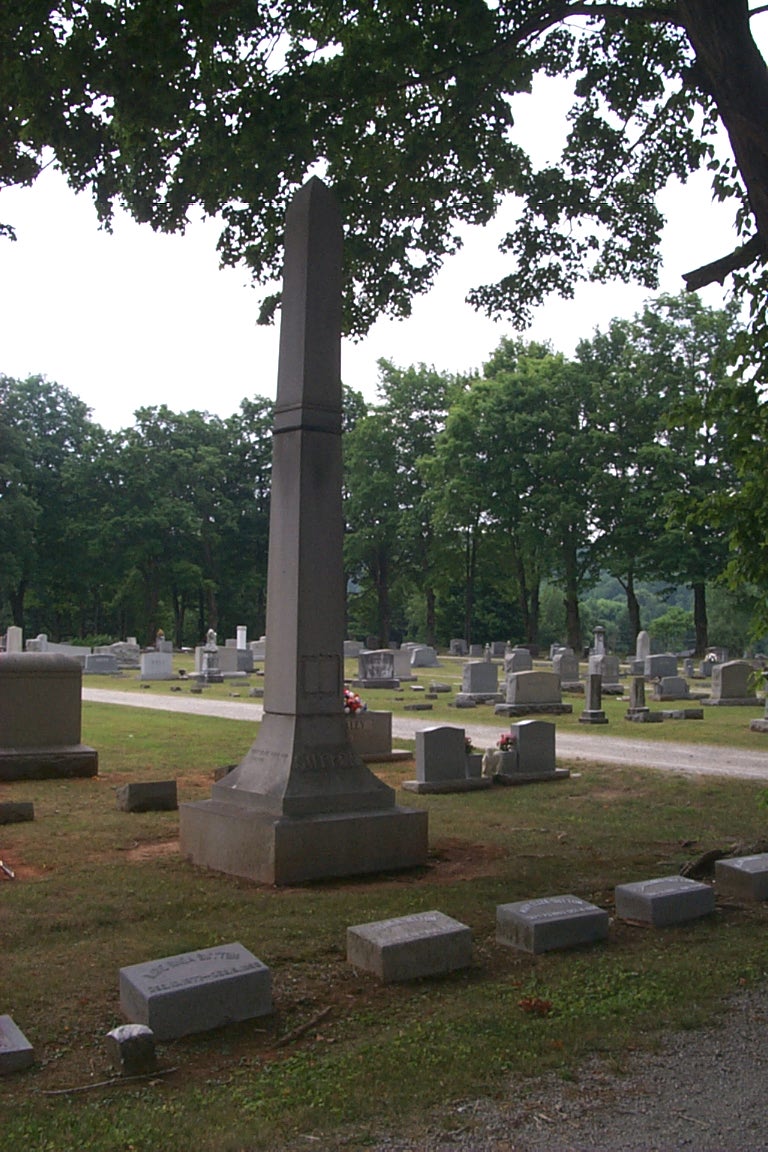 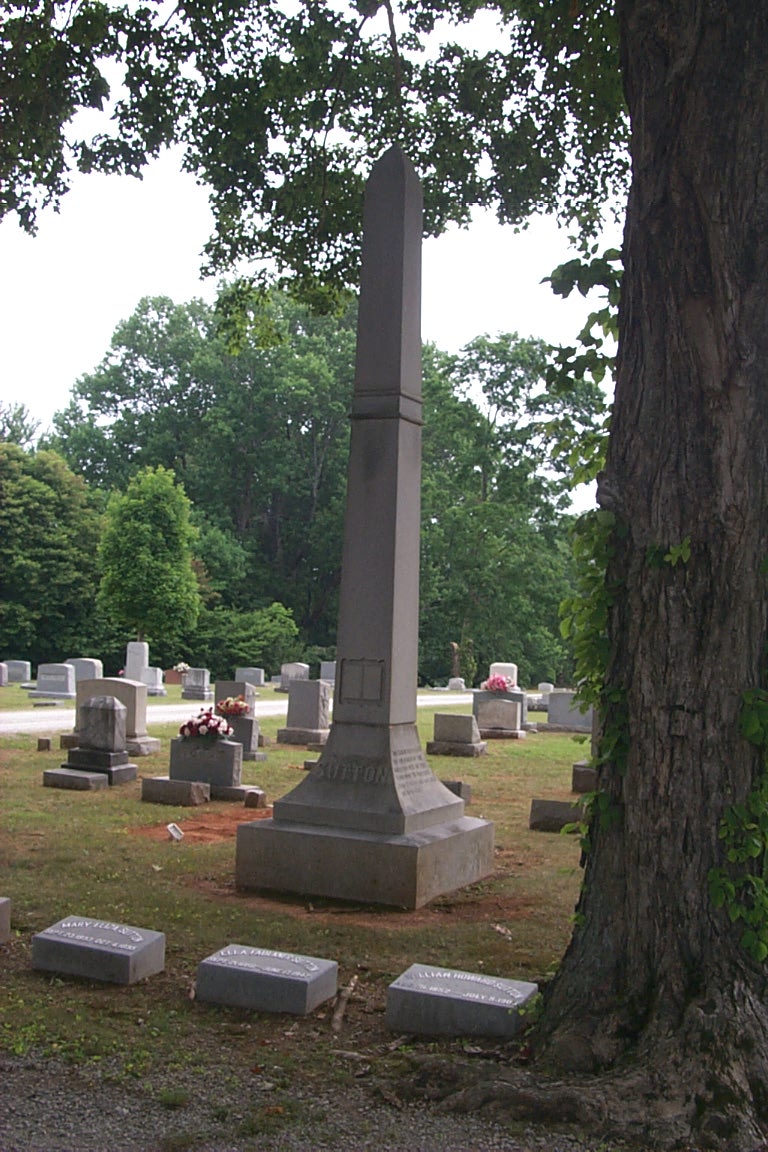 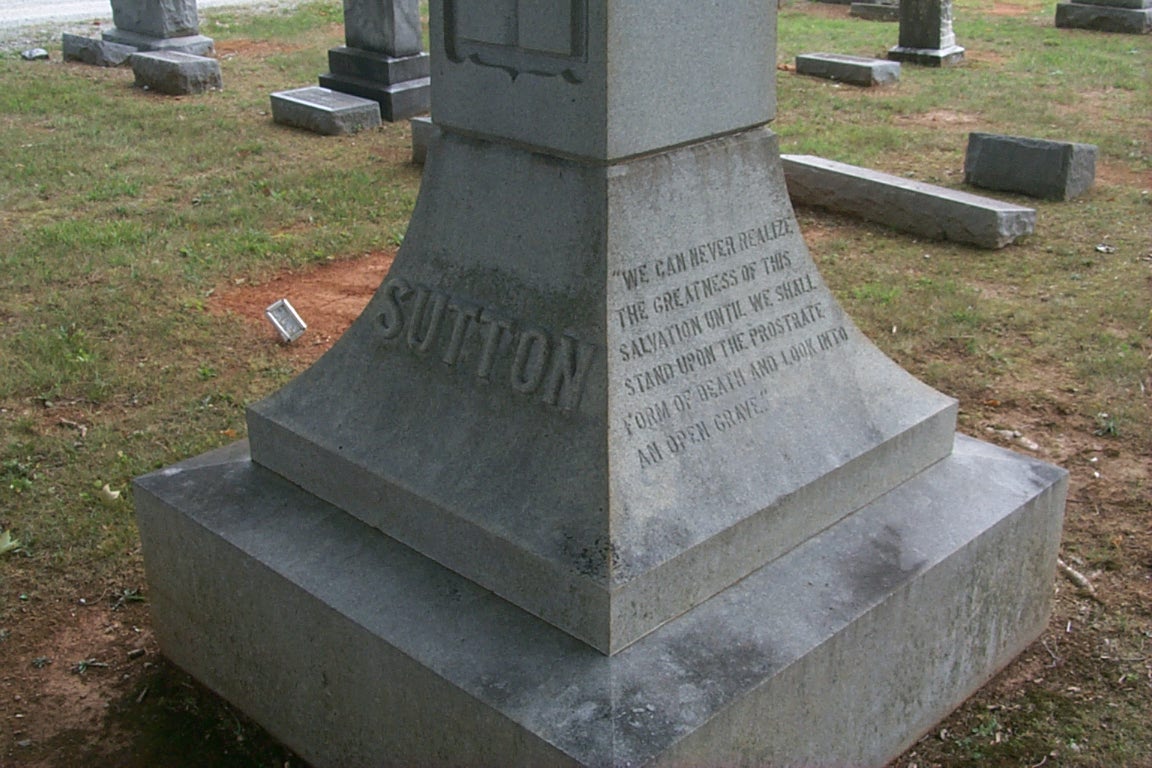 Erected By Those Who Loved Him 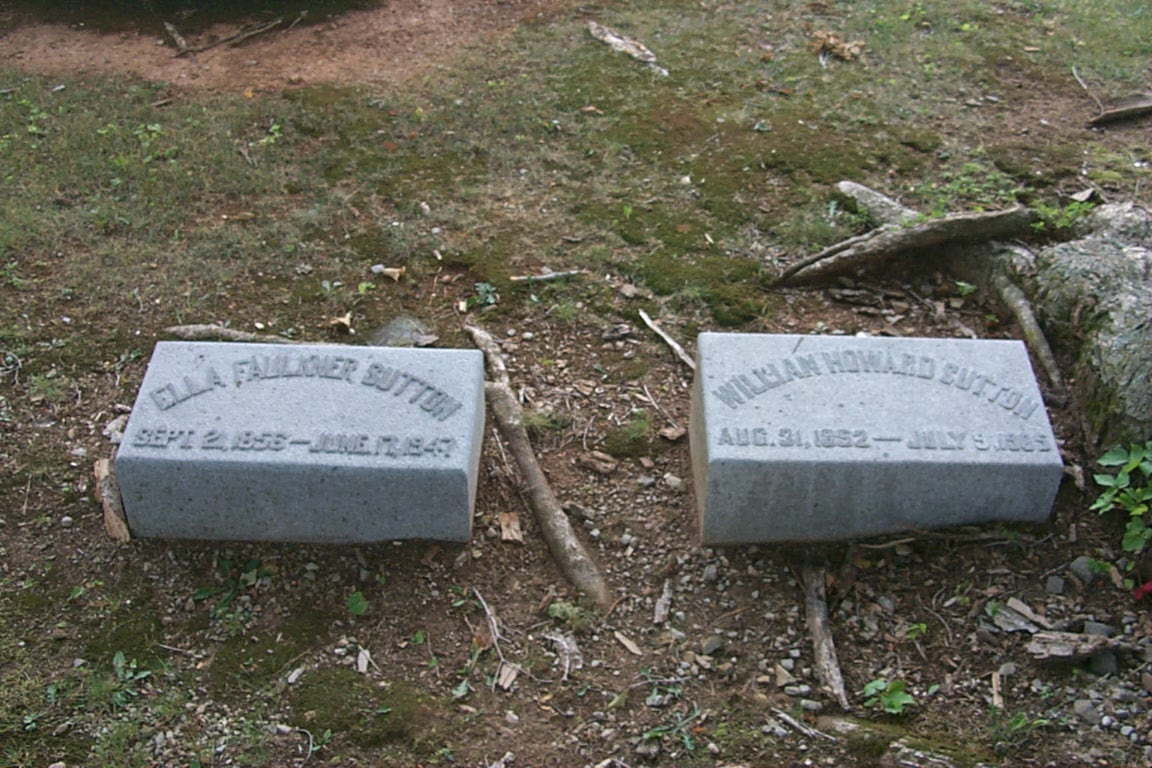 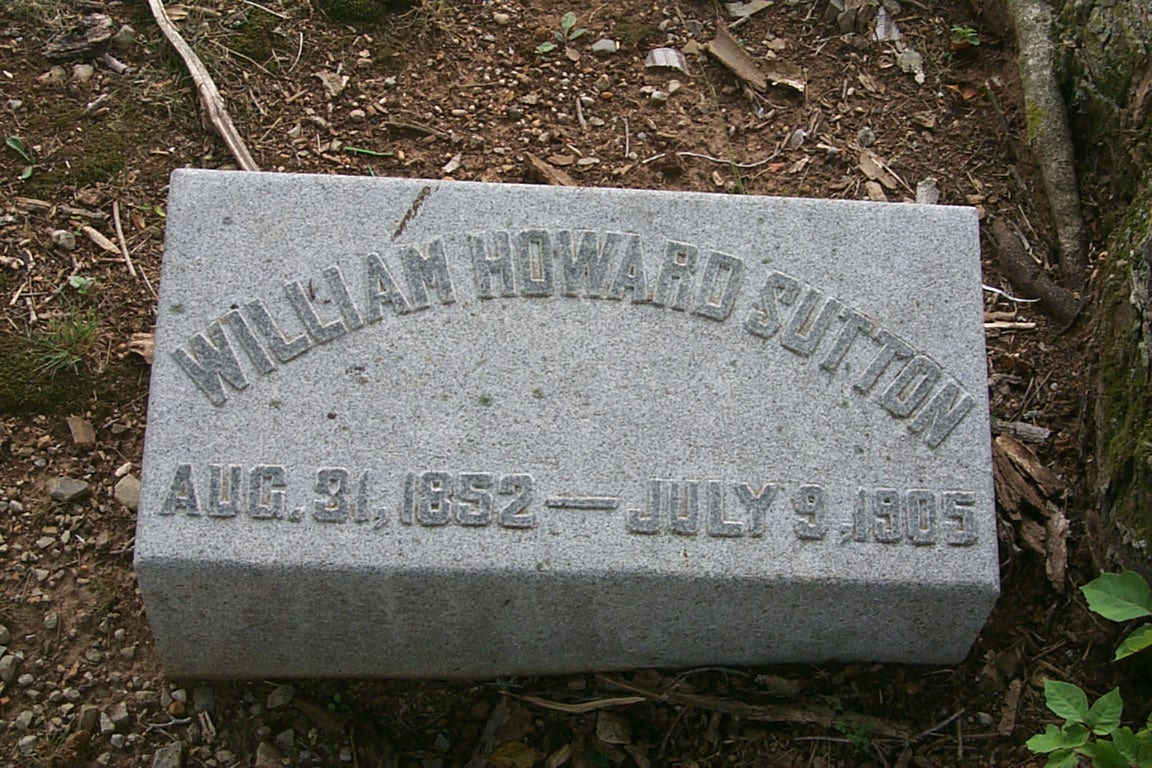