Biographical Sketch Of The Life Of Dr. Alvinzi G. Thomas

Alvinzi Gano Thomas was born in Tarversville, Twiggs County, Georgia on June 10, 1833. His father was a Baptist minister and a teacher. A.G. studied under his father and attended Mercer University for one session. He then enrolled at Bethany College in Virginia (now West Virginia) and came under the influence of Alexander Campbell. He was Georgia's first student at Bethany, receiving the A.B. degree, July 4, 1851. He then taught school at Griffin and Hampton, Georgia, while studying law and became a Disciple at Griffin in 1853. Both his father and Dr. Daniel Hook influenced him to begin preaching. 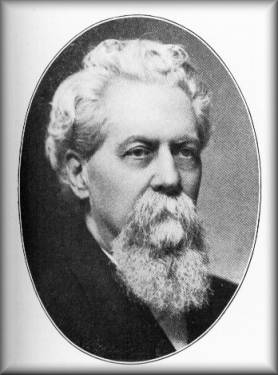 Thomas pursued his education further by going back to Bethany College for two more years of Graduate study, and had the A.M. degree conferred upon him in 1856. He read ten languages and spoke four. He often accompanied Campbell on his preaching visits to the various churches. He was officially ordained to preach at Bethany with Alexander Campbell, Isaac Errett (1820-1888), and D.S. Burnett (1808-1867) officiating.

Returning to Atlanta, his first work was preacher for the Atlanta church. While there he studied further at Atlanta Medical College, beginning about 1859, and received the M.D. degree. In 1857 he married Miss Susan Adelaide Reynolds, daughter of Mr. and Mrs. E.B. Reynolds of the Atlanta church.

Very soon after returning to Atlanta, he became Co-Editor with James S. Lamar on Georgia's first pre-Civil War publication, Christian Union. The first issue of the monthly contained 32 pages, and was published at Augusta, dated January, 1856. Funded greatly by Georgia's loving benefactress, Emily H. Tubman, the short-lived paper helped struggling members of the Church of Christ throughout the state.

When the Civil War began, Dr. A.G. Thomas, being loyal to the Confederacy, join the ranks of the 7th Georgia Volunteer Infantry Regiment as a chaplain. Before the war, his commitment to the south was noted by a visit from Tolbert Fanning, editor of the Gospel Advocate. Fanning was in Atlanta for a visit, beginning Dec. 21, 1860, and stayed in the Thomas home. He wrote in the Gospel Advocate, "Dr. A.G. Thomas is a brother of fine address, superior talents and learning, but we saw him with a feather in his hat and a glittering sword in his right hand, and doubted if he would be able to hold the sword of Georgia in one hand and the sword of the Spirit in the other." (G.A., Feb. 1861, p. 39)

Later, in a footnote on page 224, Moseley wrote, "After the war, Dr. A.G. Thomas was school principal at Irwinton, Twiggs County, Ga. He preached there and at Toomsboro, Sandersville, and at other neighboring churches. In the spring of 1869, he went to a pastorate at Greenfield, Ind. A year or so later he became professor of Latin at what is now Butler University, Indianapolis."

In July, 1877, the Thomas family returned to Atlanta from Indianapolis. In 1879, he received a lifetime call from the Atlanta church, but relinquished that position to J.S. Lamar in 1885. From 1877-1896, Thomas preached monthly, except for three years, at the Acworth congregation, home congregation of Nathan W. Smith.

In 1879, Thomas established the first Negro Church of Christ in Atlanta. Moseley noted on p.247, "In February, Mrs. Mary D. Howell informed Dr. Thomas that a number of these colored friends, who had enlisted her interest and advice, were anxious to become members of the Church of Christ, and to be organized into a congregation." A Brother Jones was authorized to preach and the Negro congregation was established, meeting in a room on Marietta Street in Northwest Atlanta. 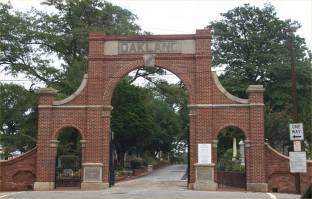 In 1881 Dr. Thomas was elected as president of the Georgia Convention where it was stated that there were twenty-three churches from Georgia represented. J.S. Lamar claimed that at least sixty churches were not represented. His greatest honor in the brotherhood was conferred upon him two years later at the General Christian Missionary Convention in St. Louis, Mo. when he was elected president of the Convention. Moseley said, p. 239, "No other Georgian, before or since, received such recognition from the national brotherhood."

Web Master's Note: Most of this biographical sketch was compiled from excepts of information in Disciples Of Christ In Georgia, by J. Edward Moseley, Bethany Press, St. Louis, MO, c.1954

Directions To The Graves Of Dr. & Mrs. A.G. Thomas

Atlanta's Oakland Cemetery, is one of the most beautiful, and famous cemeteries in the state of Georgia. Margaret Mitchell, writer of Gone With The Wind, is buried there, along with a number of other famous Georgians. 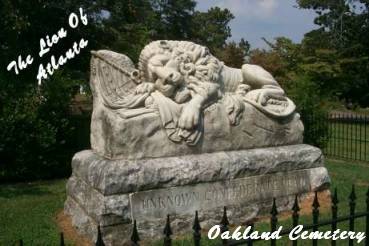 General John B. Gordon, C.S.A., and many other noted Civil War Veterans are buried there. Also, there are numerous members of the Church of Christ from the 19th century buried there as well, including the daughter of Dr. Daniel Hook, Mary D. Howell (Block 306). Her husband, Clark Howell, was a wealthy land owner and Judge in Fulton County. Both were members of the Church who are now buried at Oakland Cemetery.

Dr. A.G. Thomas and his wife, Susan Adelaide, are also buried at Oakland. The cemetery is located just a couple miles east of the Georgia State Capitol building. Travel east on Memorial Drive, for the Capitol area. Go thru a couple of lights and look for Oakland Avenue to the left. (If you see a brick wall to your left that goes for a few blocks, you've gone too far. The brick wall encloses the cemetery. You'll need to go back to the end of the wall and turn into Oakland Avenue) Once on Oakland Avenue go one block and turn right into the gate (the only open entrance to the cemetery). Once inside the gate go to the first road to the left. Then go to the first road on the right. Go to the crest of the hill and look to the right at one of the cemetery's largest Mausoleums with the name inscribed, "Austell." (Beside the doors are the names, Kennedy and Thornton). This mausoleum is at the rear of the block in which A.G. Thomas is buried. Get out of the car and walk up into the section that the mausoleum is in, and walk around to the back. Look for the white stone next to the wall. 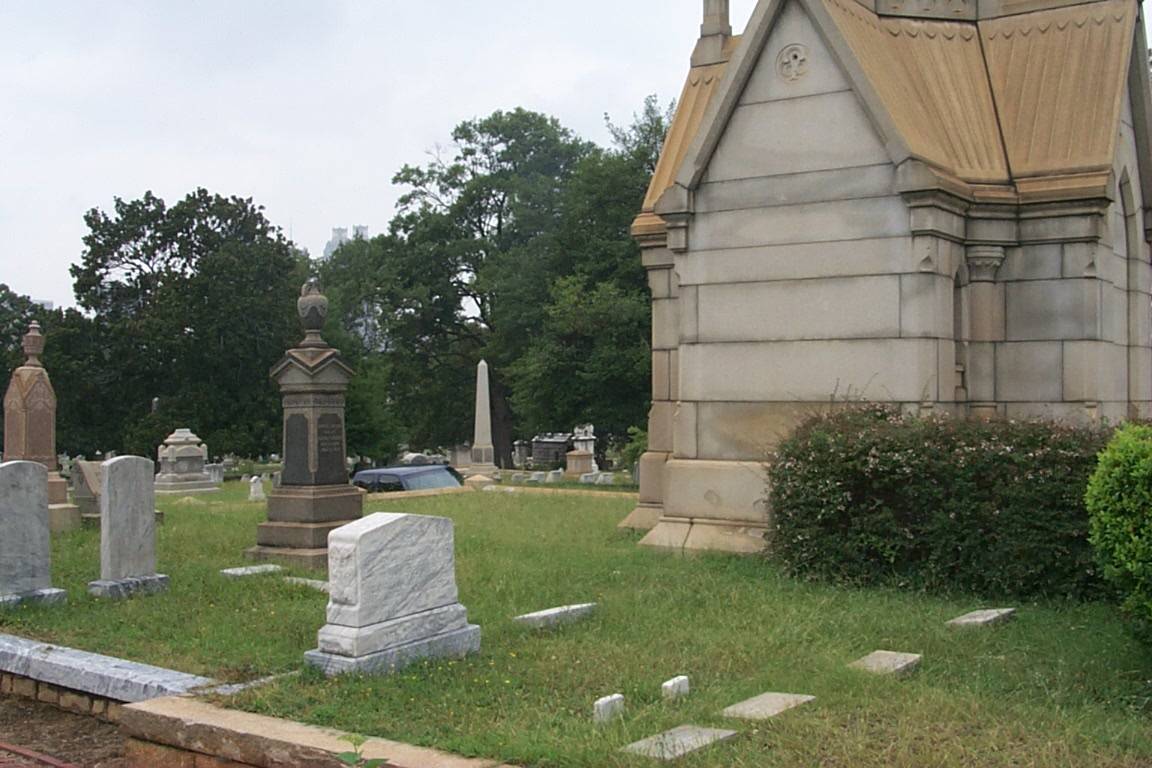 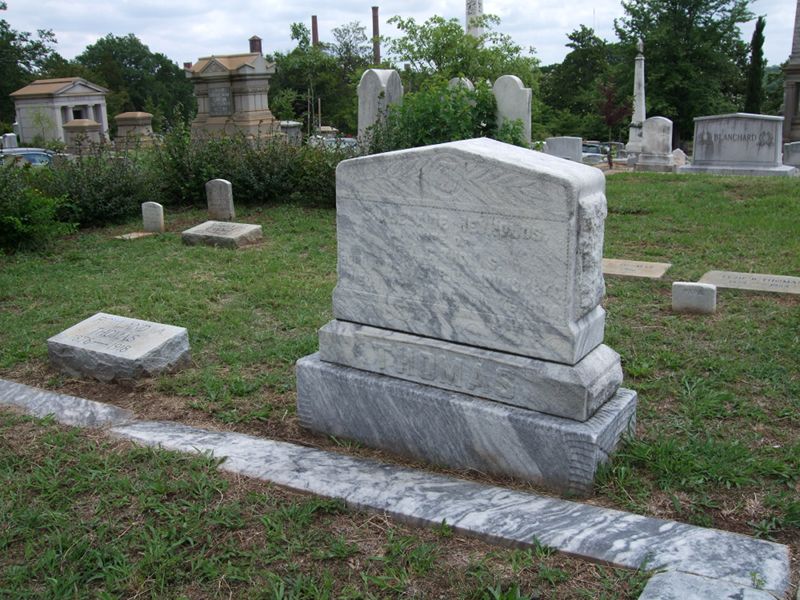 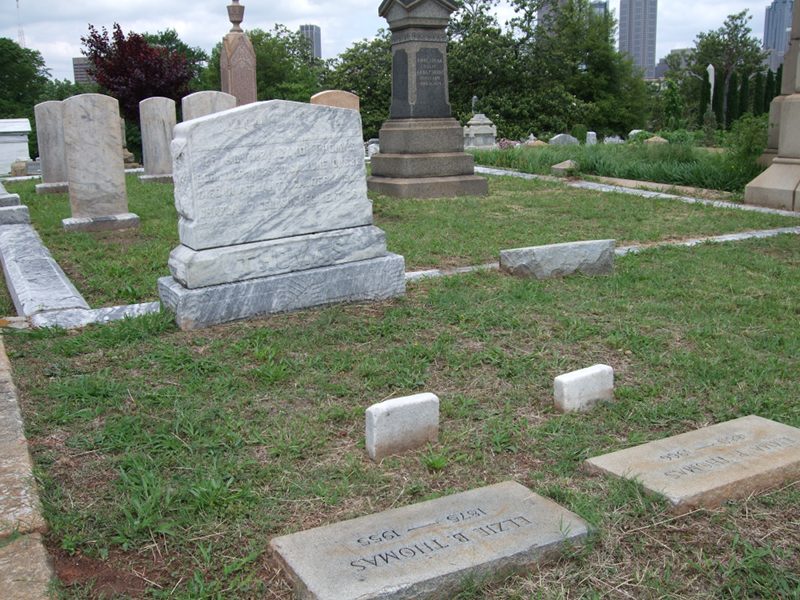 A.G. Thomas And Oakwood Cemetery Lie Within The Shadows Of Atlanta's Great Sky-Scrapers 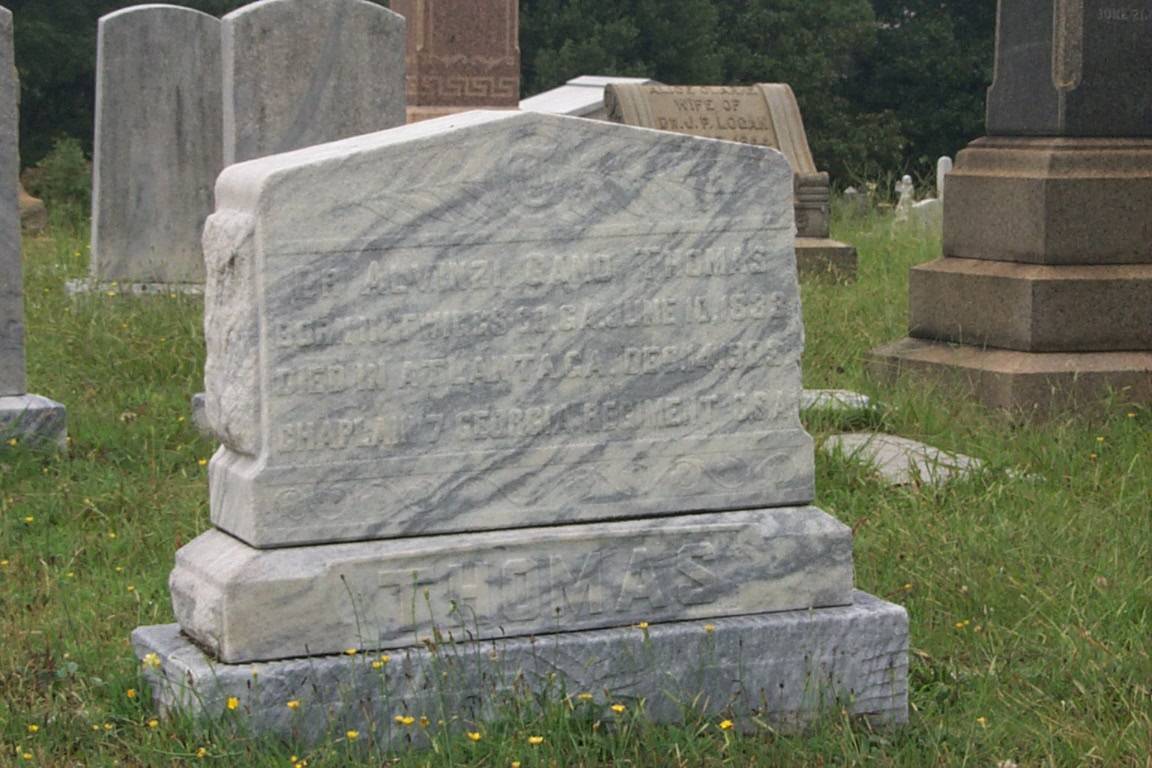 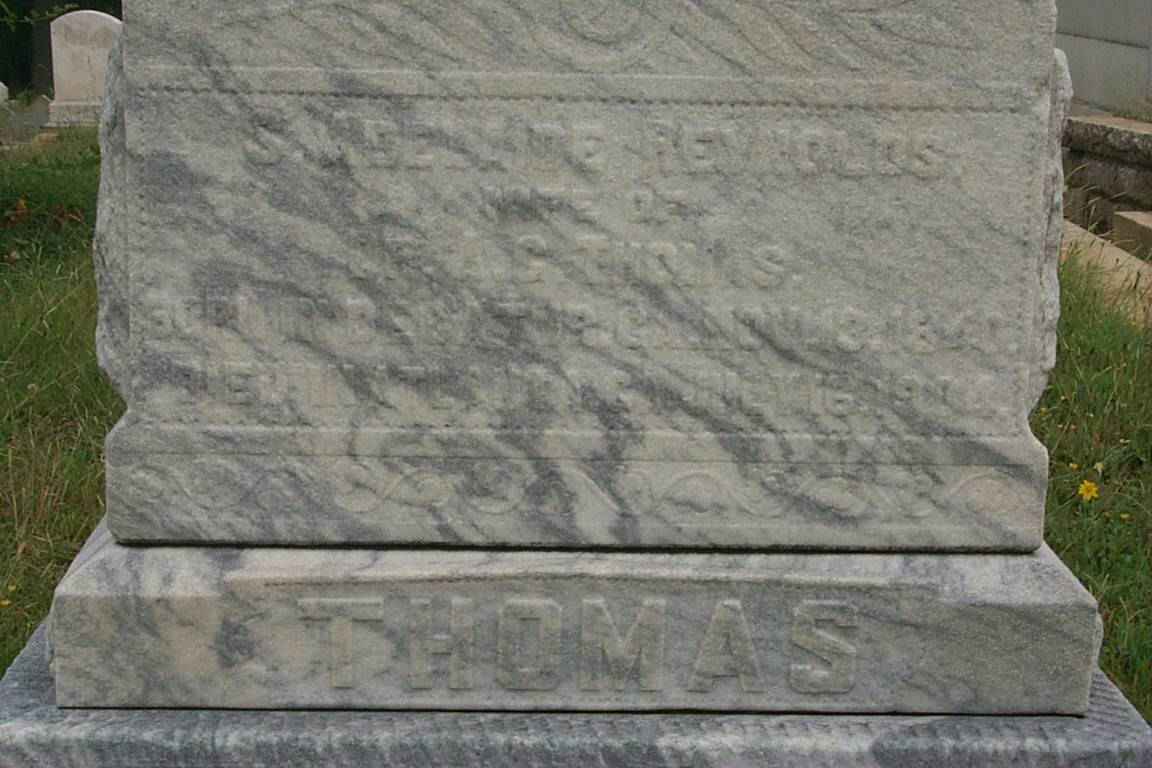 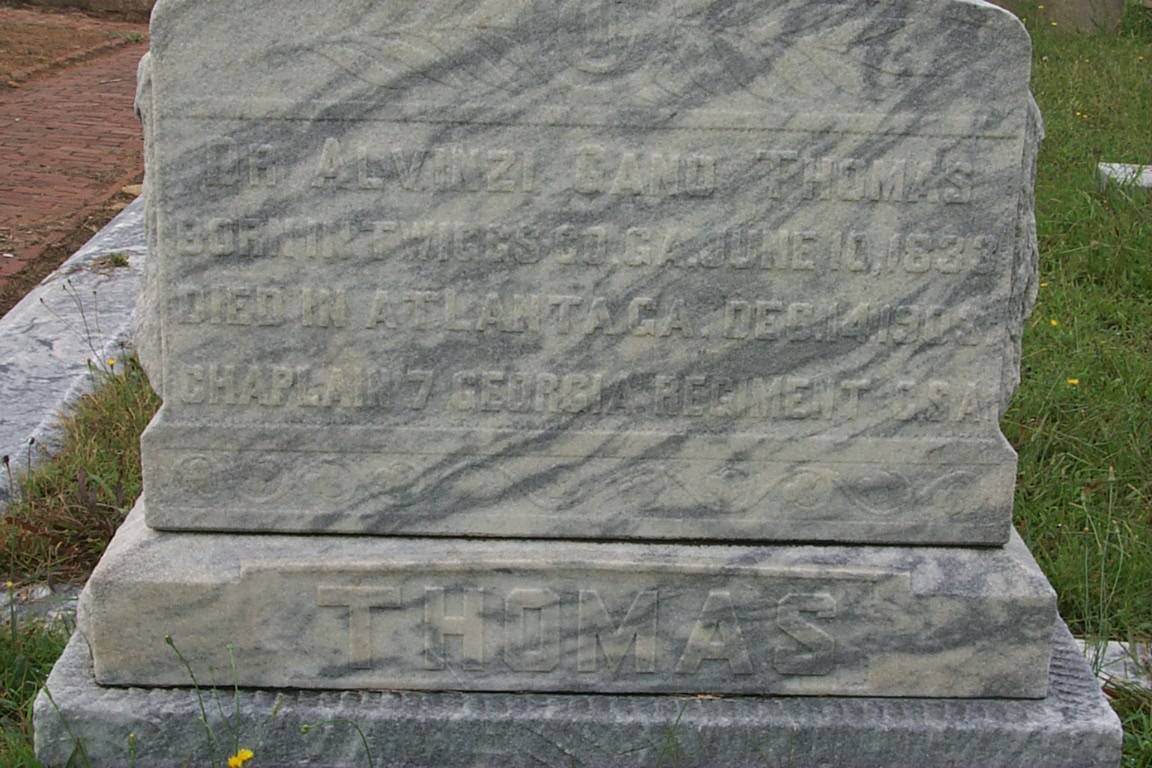