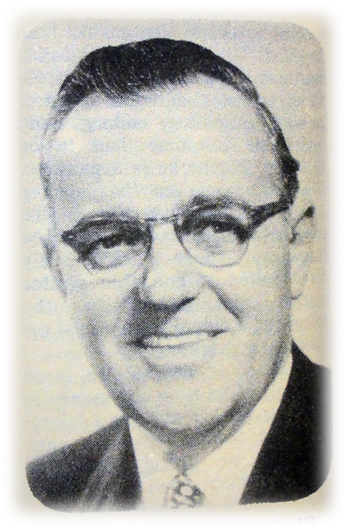 George Bancroft said at Williams College, October 3, 1800, "No truth can perish, no truth can pass away; the flame is undying, though generations disappear." These words would have been appropriate at the funeral of Anthony E. Emmons, Jr. as words to express his sensible and sensitive attitude toward the truth that makes men free. (John 8:32.)

Brother Emmons, Jr. died January 5, 1980 at Eliza Coffee Memorial Hospital in Florence, Alabama. He had been living in Florence since 1973.

I knew Anthony for more than twenty years. When he preached for the 7th and College Streets Church in Mayfield, Ky in 1956 and 1957, I was doing mission work in eastern Kentucky and preaching for the small church in Richmond, Ky. Brother Emmons was an encouragement to me in that work. Brother Emmons was born at Henderson, Tennessee June 28, 1911. In April 1923 N.B. Hardeman baptized him.

Anthony married Ruth Crawford March 1, 1937 who walked faithfully by his side for nearly forty-three years. To this union were born Anthony Wayne who lives in Dyersburg, Tn. and Toni Ruth who is Mrs. Lonnie Kelley. The Kelleys live in Mobile, Ala.

A few days before he died, brother Emmons celebrated his 50th anniversary of his preaching. Since 1973 he had not been as active in preaching because of failing health. He had been doing some of he preaching and teaching at Wood Avenue Church of Christ in Florence for about seven years. Brother Anthony worked as regular preacher for the following congregations: Annapolis Ave. and also, Eastside (now Cox Boulevard) in Sheffield, Al.; Tuscaloosa, Al.; Birmingham, Al., Corinth Ms:, Springfield, Mo., Houston, Tx., Union City, Tn., Jackson, Tn., and Mayfield, Ky. He did a good work in all these places.

Besides preaching regularly for the congregations in cities mentioned above, brother Emmons preached in series of meetings all over the land including many efforts in mission points. He also preached on radio programs, including a daily program on WENK in Union City, Tn. for two years.

Brother Emmons was Co-editor of The Way of Life 1943 to 1947. He was editor of Truth In Love in 1948. He wrote several articles for The World Evangelist.

Besides his wife Ruth, and children Toni and Wayne, Anthony is survived by three grandchildren, two sisters, Mrs. E. C. James of Summertown, Tn., and Mrs. Herman Weaver of Shiloh, Tn., and a brother, Paul Emmons of Jackson, Tn.

The funeral service for brother Emmons was conducted in the meeting house of the Wood Ave. Church of Christ in Florence, Al. January 7. David Sain, Lamar Plunkett, Jack Wilhelm and Hugh Fulford participated in the service. Another faithful soldier of Christ has laid down his armour and joined the host of the spirits made perfect by the blood of the lamb. Brother Emmons was my friend. He has left the land of the dying and gone to the land of the living!

-Basil Overton, World Evangelist, February, 1980, page 12 (Note: This is a timed piece. Many of the post-death facts have changed.)

On Saturday night, Jan. 5, 1980, Anthony E. Emmons, Jr., preacher of the gospel for 50 years and six days, died suddenly and peacefully of a massive heart attack at his home' in Florence, Ala. during the 68th year of his sojourn on this earth.

On Sunday before his death he had celebrated his 50th anniversary as a preacher. As a boy of 18 he had made that first effort at Shiloh Park, Tenn., at the congregation established by his father, Anthony Elbert Emmons, Sr., the United States Marshal of Shiloh Park.

He was a happy, jolly person with an infectious laugh-a high pitched, genuine giggle that frequently could be heard above the noise of the crowd at various gatherings. He was a master story teller and loved to charm an individual or a group with an array of true experiences that were amazingly catalogued in the recesses of his mind for instant recall on most any subject. Slightly embellished by the years, these stories brought respites of laughter to hundreds that knew and loved him. Many were on himself. He enjoyed telling about that first sermon at Shiloh Park-how it was practiced to a perfect 35 minutes time and again before every animal in the barnyard, but when actually delivered had lasted only 13 minutes, including three verses of an invitation song.

Additionally, he spoke in hundreds of gospel meetings, lectureships, and was a frequent contributor to gospel papers. In the 1940's he, along with Emerson J. Estes, edited and published from Birmingham, the Way of Life, a gospel paper that was widely circulated.

In 1973 he retired from full-time work due to continued degenerating health, and he and his wife, Ruth, moved to Florence, Ala., where they owned a home.

His last years in Florence were among the best, due largely to the love and foresight of the Wood Avenue congregation. They recognized in him an enormous capacity to serve and give love and joy, and they put him to work as his health allowed. He taught classes, preached in the absence of the regular preacher, counseled, wrote articles for the bulletin, and daily encouraged people with phone calls and personal notes. They listened and learned and loved him in return. They ministered to his physical needs and even spoiled him a little. They gave unselfishly to him and received in kind a hundredfold from him. This aging, crippled preacher and this lovely church had a love affair that was beautiful to behold. In his last years they gave to him the greatest of gifts the opportunity to serve and be useful.

Remarkably, this jolly man endured during his life many physical handicaps without complaining. At 13 he was completely bedridden for a year with severe osteomyelitis, resulting in permanent crippling of a leg and an arm that even many friends were not aware of. In later years, severe arthritis plagued him, and finally combined with the earlier disease to limit his mobility. He could walk short distances with a walker or canes, and used a wheel chair for distance. He hurt constantly but' never complained.

He is survived by his devoted companion of 43 years, Ruth Crawford Emmons, without whose help and love he simply could not have functioned, especially in his later years; a son, Anthony Wayne Emmons of Dyersburg, Tenn.; a daughter, Mrs. Lonnie Kelley of Mobile, Ala.; two granddaughters, Celeste Yvonne Emmons and Angelyn Antoinette Emmons; one grandson, David Anthony Kelley; one brother, Paul Emmons; and two sisters, Mary Weaver and Alice Lou James.

We will miss him, especially those of us who knew him best and loved him most, but we are thankful that after a wonderful Christmas with all the children and grandchildren, after celebrating fifty years in the pulpit, after seeing his beloved Alabama football team achieve the national championship, and after teaching his auditorium Bible class on Wednesday night, he quietly, without prolonged suffering, slipped away.

-Anthony Wayne Emmons; Gospel Advocate, 1980, February 7, issue, page 86
Note: This is a timed piece. Some of those enlisted as living may be now deceased.

This faithful gospel preacher was forced into early retirement from fulltime preaching because of crippling arthritis. In spite of this handicap, he remained active in the work of the Lord until his death. In fact just three hours before his death, he talked to a couple about obeying the gospel. They did become Christians shortly after his death (" . . . and by it he being dead yet speaketh" Heb. 11:4.)

During the recent holiday season Anthony Emmons completed fifty years of gospel preaching. Those years involved times of great joy and peace, but he also had his share of trials and tears. It was thrilling to listen to him tell stories 'about his preaching experiences, he had a contagious laugh that made his humorous stories even more delightful.

Anthony and Ruth Emmons moved to Florence, Ala., at the time of his retirement in 1973 and the elders of the Wood Avenue church asked him to serve as associate minister. He was a continual source of encouragement and wisdom as we drew heavily from his storehouse of experience and faith. His death leaves a great void in this congregation: He was a great soldier of the cross of Christ. He loved the truth and he delighted in teaching that truth as he touched the lives of thousands across this nation. He had a zeal for life and an interest in people that was 'truly inspirational.

His funeral was on Monday, Jan. 7, 1980, in the Wood Avenue building. Hugh Fulford, Lamar Plunket, David Sain and Jack Wilhelm conducted the services. His body was carried to its final resting place by the elders at Wood Avenue.

- David Sain, Minister, Wood Avenue Church of Christ, Florence, Ala,. Gospel Advocate, 1980, February 7, issue, page 86
Note: This is a timed piece. Some of those enlisted as living may be now deceased.

A. E. Emmons, Jr. Is Dead After A Fifty-Year Ministry

Anthony E. Emmons, Jr., age 68, has passed on to his reward, after having completed a fifty-year ministry in the gospel of Christ. The brotherhood at large, and particularly in Alabama and Tennessee, have suffered a great loss.

In the words of Luke in his description of Barnabas, Anthony E. Emmons, Jr. was a "good man." He was a man whom any mother would be delighted to have her son imitate. Though he had been in poor health for several years and had suffered considerably, he was always characterized by a cheerful disposition and an incessant program of work. Though his physical state of health had forced him into semi-retirement, he was quite active as the associate minister of the Wood Avenue Church, Florence, Ala.

Brother Emmons was a man of unusual talents-with a keen logical mind, a rich resonant voice; a pleasing personality, and a gift for teaching and motivating audiences. The late G. A. Dunn, Sr. once observed that Emmons had exceptional natural ability; but more than his talents, Emmons was humble, kind, honest, pure in life, and fair in every respect. He was a man who would not scruple to over-draw the case of a person who held or promoted a doctrine with whom he strongly disagreed. In short, Anthony E. Emmons, Jr. was a full grown Christian-in fact, a spiritual giant. This writer has enjoyed many years of association, with him, and has been wonderfully blessed by that association;

—Rex A. Turner, Alabama Christian School of Religion, Montgomery, Ala. Gospel Advocate, 1980, February 7, issue, page 86,87
Note: This is a timed piece. Some of those enlisted as living may be now deceased.

The Way Of Life
Publication Edited by A.E. Emmons, Jr. 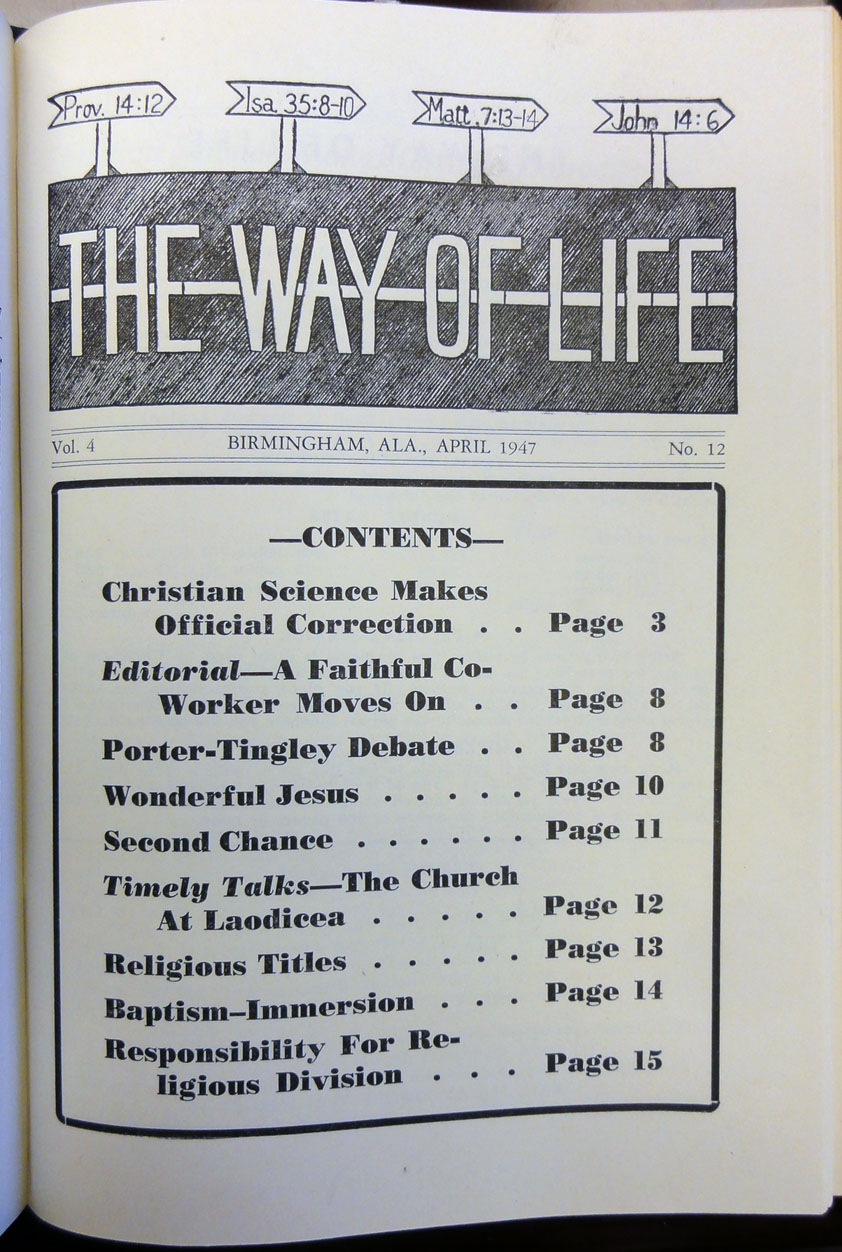 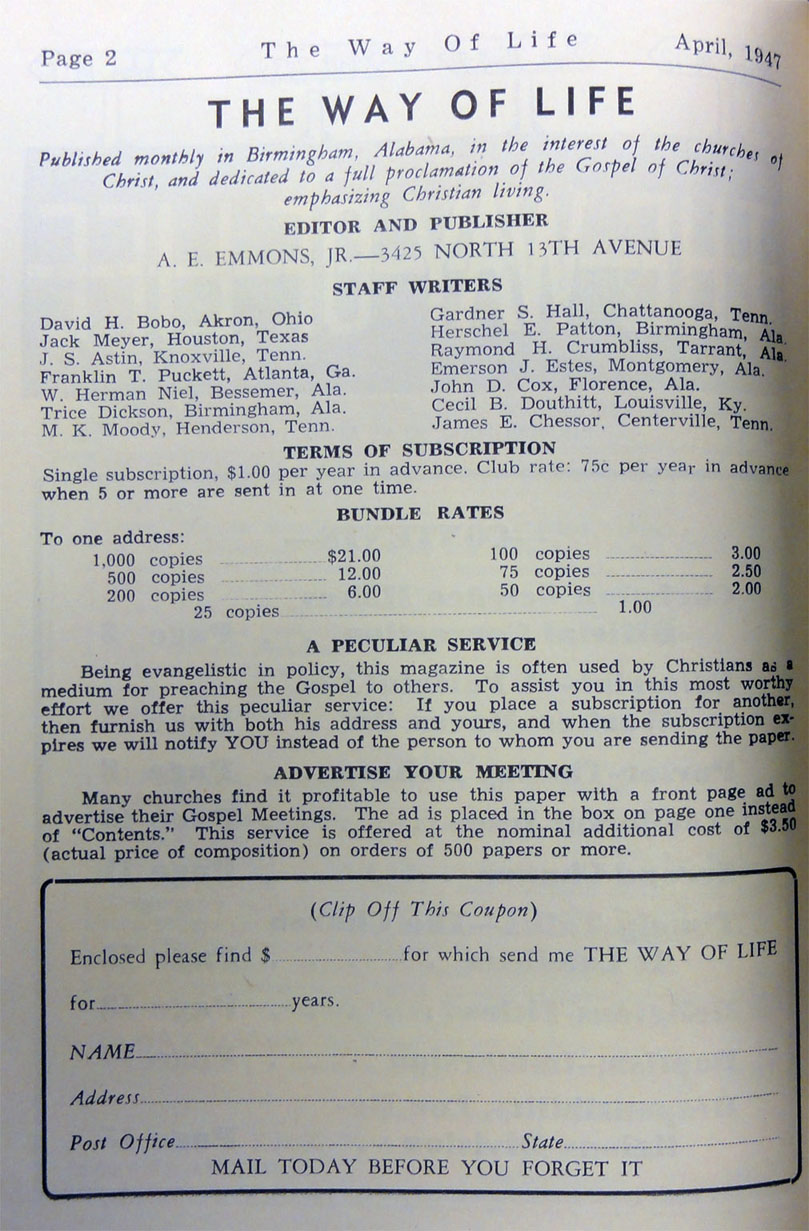 Directions To The Grave of A.E. Emmons

A.E. Emmons, Jr. is buried in the Tri Cities Memorial Gardens in Florence, Alabama. It is located at 2601 Florence Blvd., Florence, Alabama. The office number is 256.764.7542. He is buried in the Garden Of The Apostles, at the front-center of the cemetery. While in the cemetery, be sure to visit the grave of another gospel preacher of yesteryear, A.R. Hill, Jimmy Vest, & Gerald R. Buchanan. 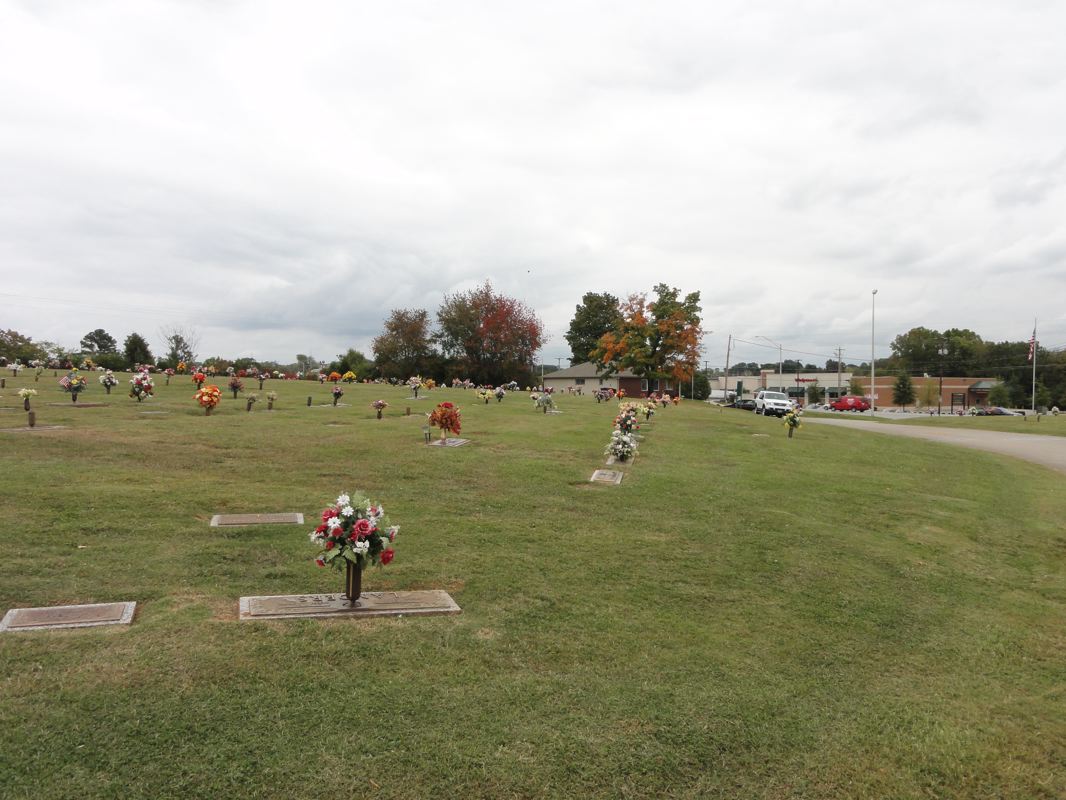 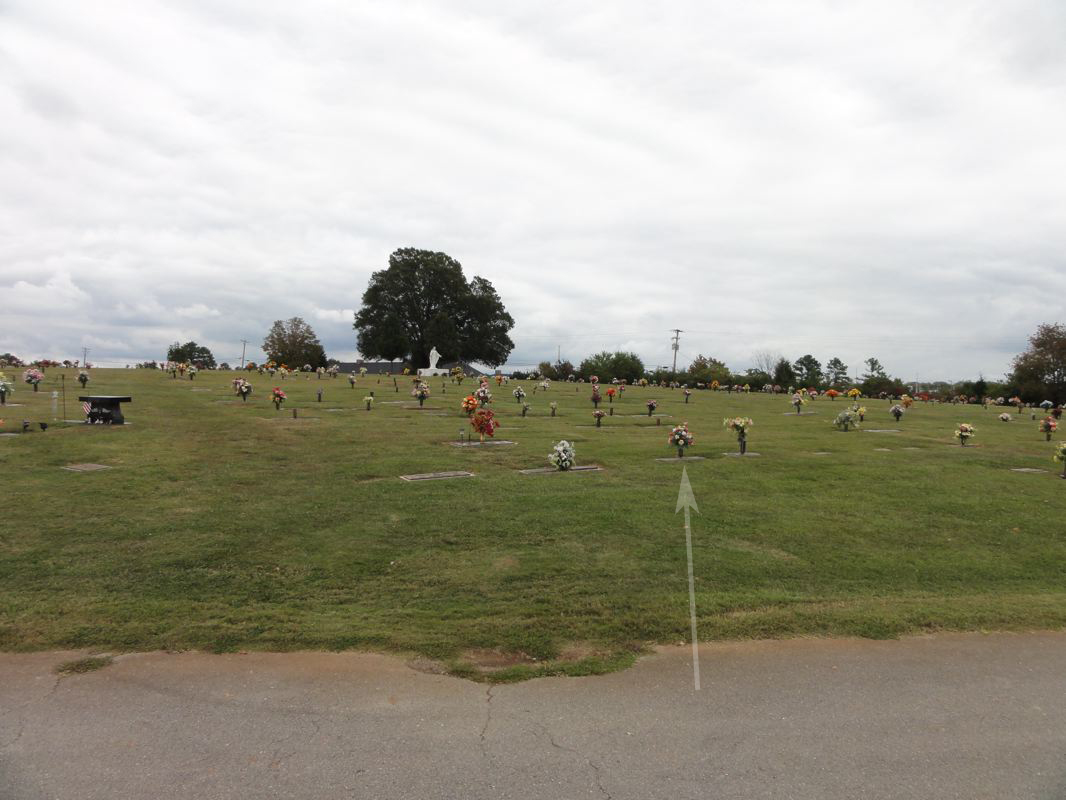 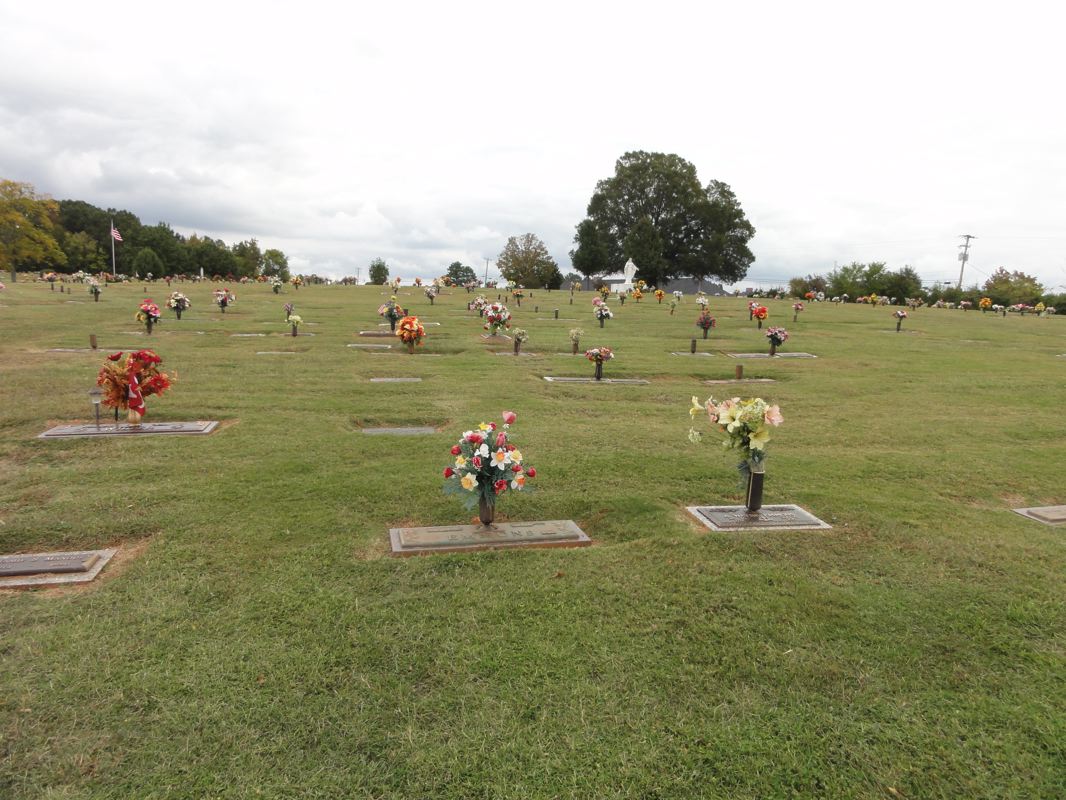 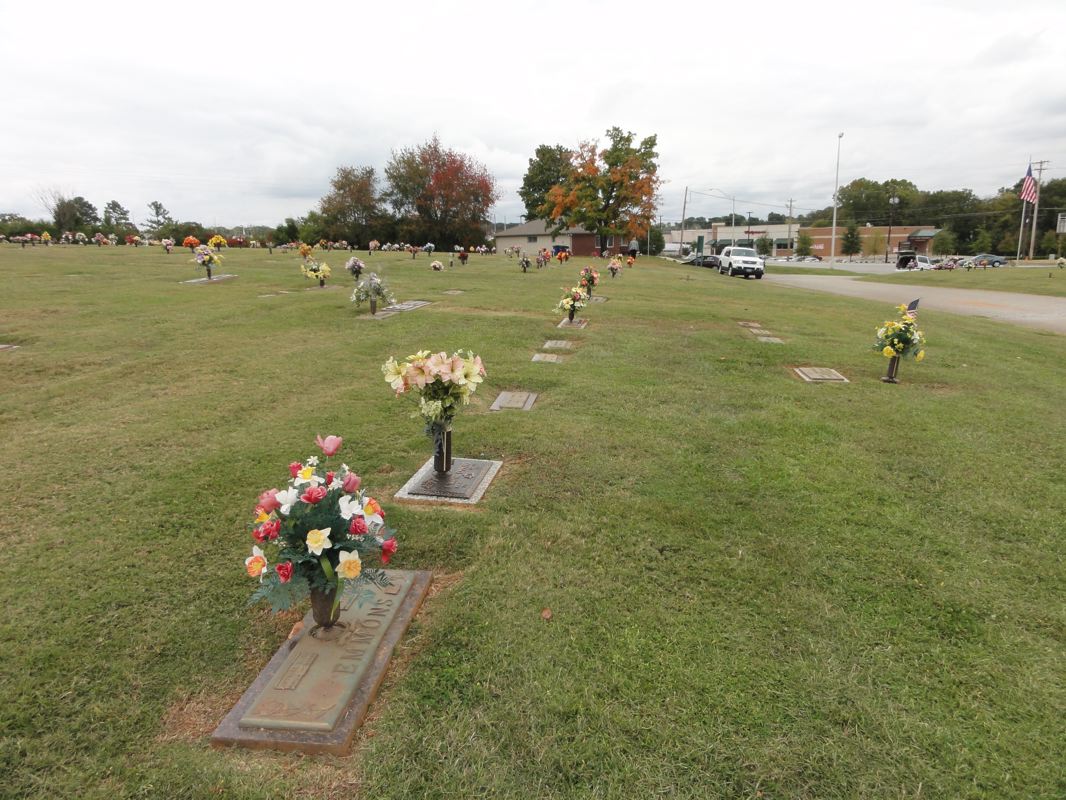 See Cemetery Office In Distance To Get Location Perspective 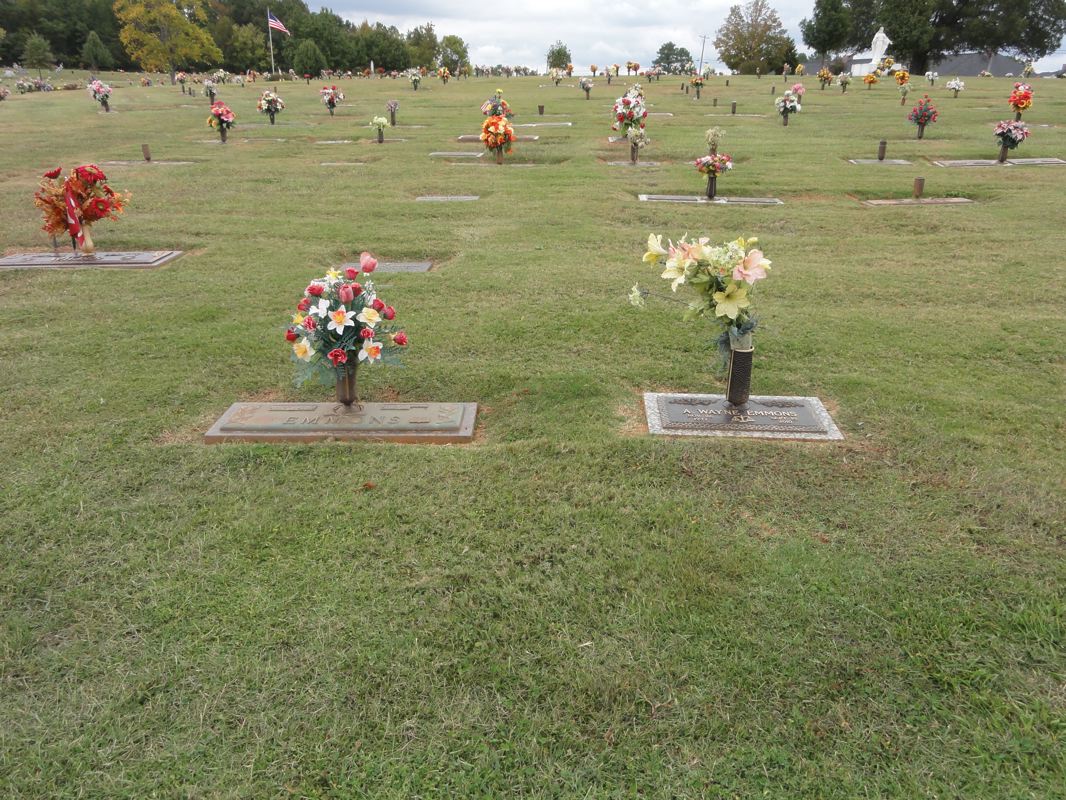 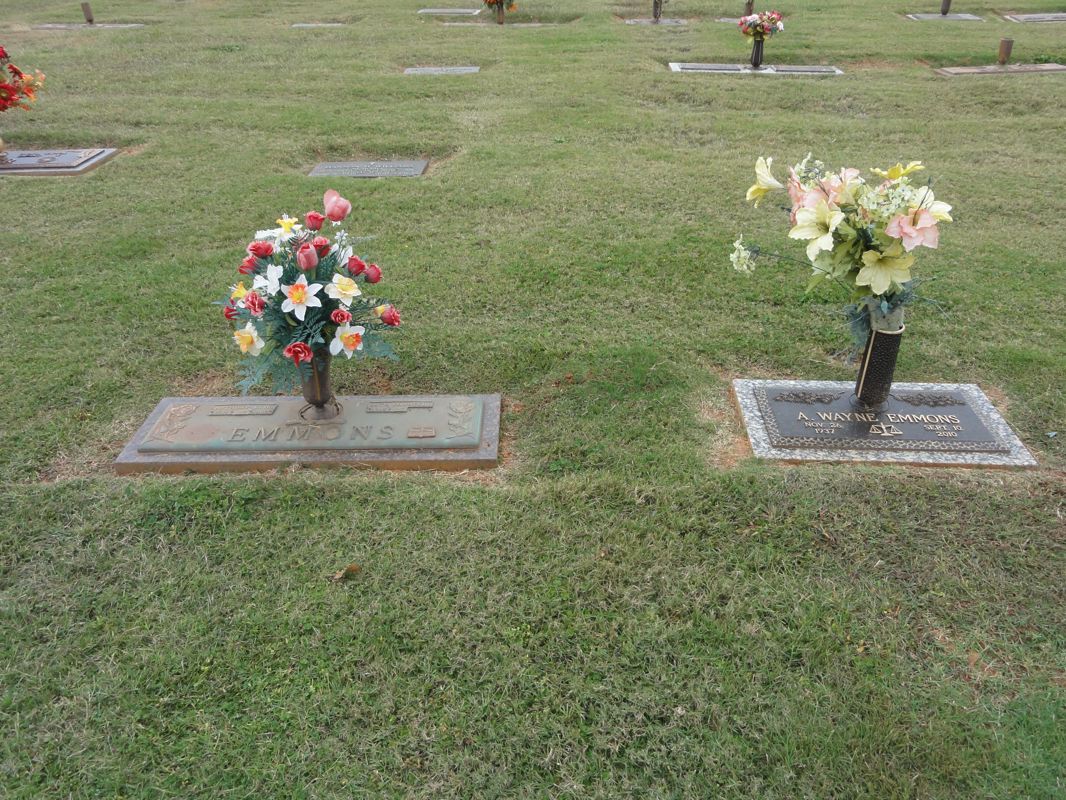 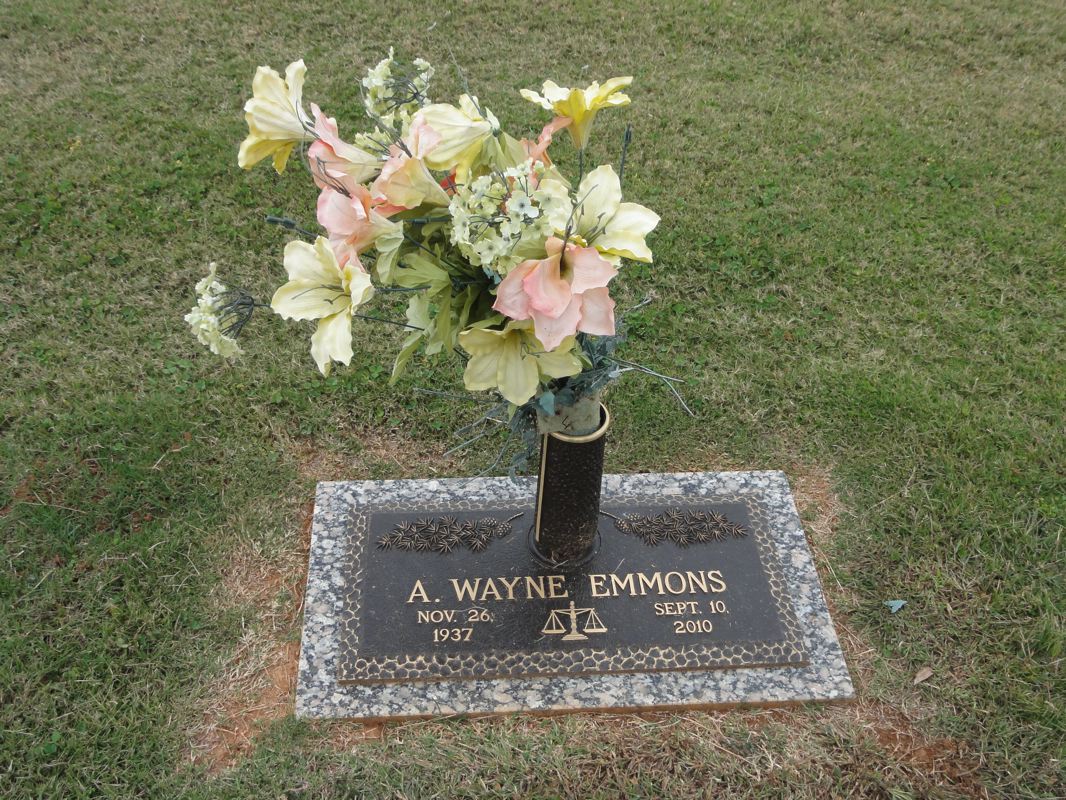 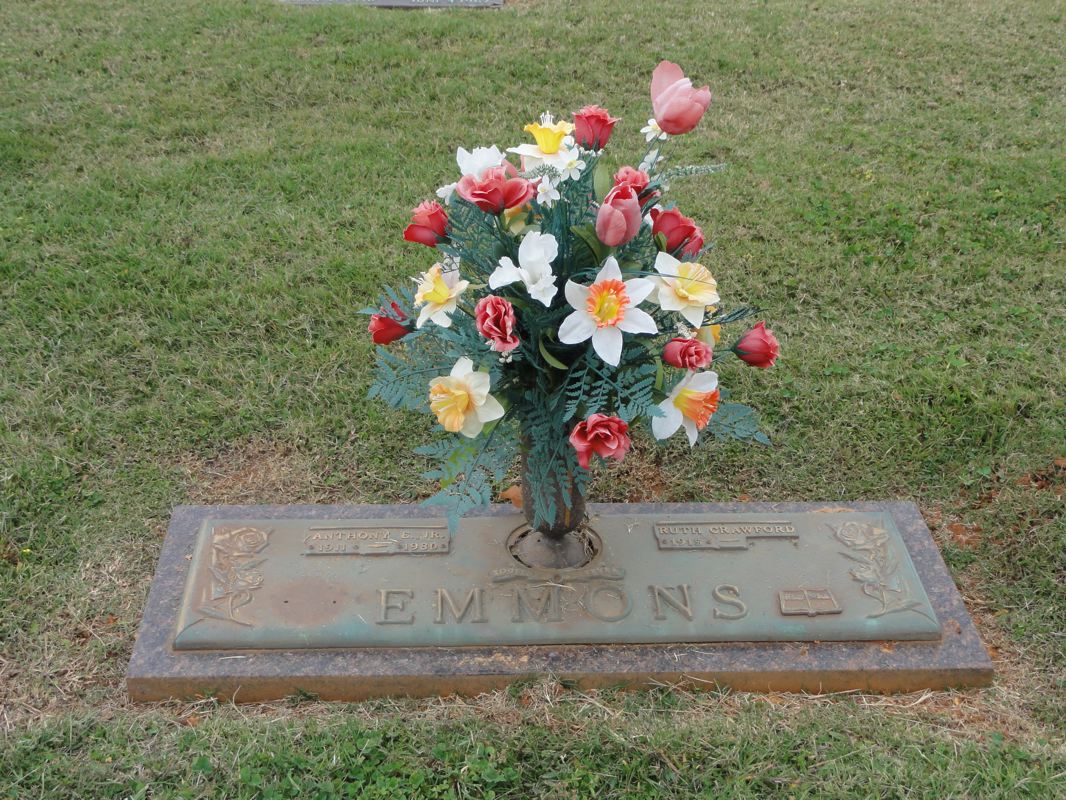 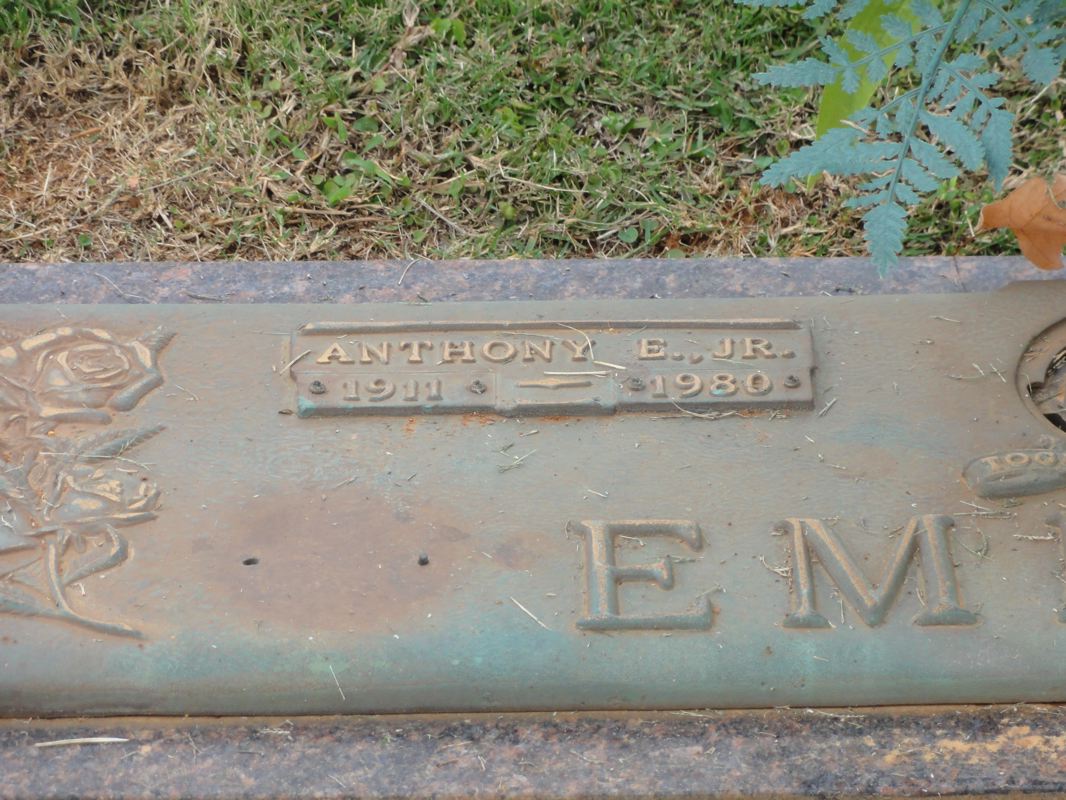