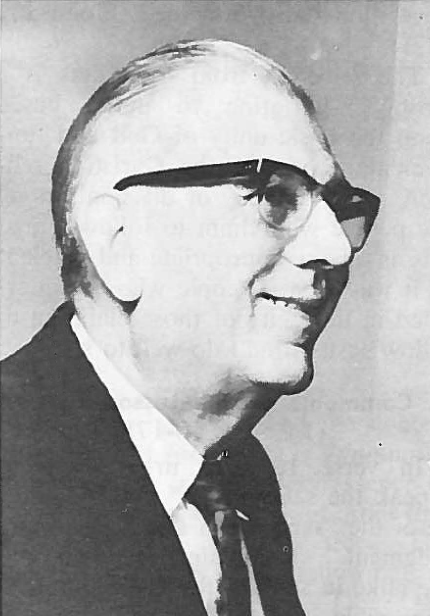 The Early Life And Work Of W.D. McPherson

W. D. McPherson, a grand soldier of the cross, a faithful hard working and devoted minister of the gospel of Christ has preached thirty-eight years in the state of Georgia.

On May 12, 1904, there was born in the home of William and Mary McPherson, a precious little boy who was to become an outstanding worker in the Lord's kingdom. Douglas was born in Hopkinsville, Ky., but with his parents, moved to Nashville when quite young. The McPhersons lived in East Nashville and were members of the Shelby Avenue Church. Douglas' mother passed away in 1971, but at the age of 93, his father still lives and remains an elder.

Douglas began attending David Lipscomb when a senior in high school, going on to complete two years of college in 1929. He attended Vanderbilt for two years, receiving his B.A. degree. His plans were to begin preaching after this, but having been offered a scholarship for another year's work, he decided to study one more year in the School of Religion, receiving his Master's degree.

During his college years Douglas preached throughout Middle Tennessee. His father told him after finishing high school, he was not able to send him to college but if he wanted to go, he would provide him a home as long as he was in college. Douglas worked to provide his necessary expenses other than a place to stay. His preaching appointments were of some help in this.

I asked Brother McPherson if he remembered what caused him to have a desire to preach. He said that when he was 13 years old, he heard Price Billingsley under a tent at Tenth and Fatherland in Nashville. There was one particular sermon which moved him to decide he wanted to preach. From that day on, he never changed his mind, he never looked back.

Why Atlanta? S. H. Hall was preaching at Russell Street in Nashville in 1933. The elders at Moreland Avenue knew him by his long years of service at West End in Atlanta. They asked Brother Hall to recommend a preacher to them. Brother Hall went to Douglas McPherson and told him he wanted him to come to Moreland Avenue to preach.

Moreland and "Brother Mac," as he came to be called very affectionately, had never met, but each trusted the wisdom and recommendation of Brother Hall. The first Sunday in December, 1933, "Brother Mac" preached his first sermon in Georgia at Moreland Avenue. Neither he, nor the good people at Moreland knew it, but that was the beginning of a long, pleasant, and fruitful association for both.

When he began working with Moreland, the church had a $14,000 indebtedness. The depression was in full swing. The members were just average, hard working people, but willing to sacrifice for the Lord's work. They promised to give Douglas $50 per month and board. It was a struggle for him and them but they were very successful. Elders at that time were A. E. Lamberth, Johnny Boyd, J. E. Keckley, and S. K. Moody.

Back in Nashville, there was someone whose pride and joy was 'way down in Georgia' other than the parents of W. D. McPherson. Douglas had known and fallen in love with Thelma Baker, a pretty, young lady in the Shelby congregation. They were engaged before he came to Atlanta, so naturally, he was as anxious to get her down here as she was to come.

April 26, 1934 was the day set for Douglas and Thelma to become husband and wife. Of course she looked forward to moving to Atlanta and accepting the responsibilities of a preacher's wife. The members at Moreland also looked forward to meeting her. An apartment was provided in the home of one of the members, and members at Moreland got together much of the furniture for them to begin keeping house. At this time the church raised his salary to $75 per month.

The relationship between the McPhersons and members at Moreland Avenue has always been exceptionally congenial. They never wanted to change preachers and he never wanted to move to another church. He was gone for two years, but not because the church wanted him to go or because the McPhersons wanted to leave. But in 1942, Georgia Christian School at Dasher was in great need of a good man to be President. With "Brother Mac's" training and experience, S. H. Hall recommended him to the board. With considerable reluctance, he and his wife agreed to go. However, the great responsibility and constant supervision were too much of a burden on his nerves, so after two school terms, they came back to Moreland in 1944. The members were as eager to have them back as the McPhersons were to get back. From that day to this, the McPhersons have been a permanent "fixture" at the Moreland Avenue Church of Christ. They have greatly endeared themselves to the members at Moreland Avenue and Christians in the entire Atlanta area. He has taught, baptized, performed weddings, and conducted funerals for three generations in the same congregation.

While the McPhersons were at the school, a group left Moreland and began a new work in the Kirkwood area of Atlanta. This created a few problems and left Moreland somewhat smaller, but with "Brother Mac's" return everything was ironed out. Congenial relations were restored between the two groups, and both began to grow.

From the beginning of Brother McPherson's work with Moreland, the church has experienced a constant and permanent growth. There is reason to believe the members have grown stronger in the faith as the church grew in size. In 1935 they saw a need to use a tent in evangelism. Not having money to buy one, members began to collect old newspapers to sell and used that money to buy a tent. "Brother Mac" held many meetings in the tent, mostly on the east side of Atlanta. One time they put the tent up at Fourteenth and State Streets in Northwest Atlanta. "Brother Mac" preached two weeks and Brother Hale preached two more weeks. Before the era of tent meeting declined they had bought three tents.

As Atlanta grew and the church grew, other congregations were started in the area. Moreland had a part in beginning the Grant Park church (which merged back with Moreland in 1965), Seminole, Avondale and Chamblee. "Brother Mac" preached the first sermon in the Chamblee high school auditorium when Chestnut Drive was beginning. Moreland has been very mission-minded through the years. They supported a man in Germany when Brother Gatewood was getting that work started. They also started the church in Carrollton, Ga. They have always assisted other churches in the state nad other parts of the nation and world. There are leaders and very stable members in most churches in the area that at one time were members at Moreland.

The greatest disappointment "Brother Mac" remembers is when an effort was made in the Atlanta area to get a Christian school started in the 50's. They went so far as to get a charter, but then opposition caused them to get no farther. However, "Brother Mac" lived to see his dream come true. In 1961 he was chairman of a committee that was elected to appoint a board for what is now Greater Atlanta Christian School. He considers the school one of the bright spots in the history of the church in Atlanta and his efforts in Georgia.

Another bright spot was some years ago when G. C. Brewer was invited to come to Atlanta and speak on the subject of Evolution. The third impressionable event was the Areawide Campaign the churches conducted in 1965 in the city auditorium. Brother McPherson has held an average of about four meetings per year from Canada to Florida. He tried to hold at least one mission meeting each year as long as his health permitted. It is very evident that the church in the Atlanta area, and the entire state of Georgia has grown because of the work and dedication of W. Douglas McPherson and his good wife.

Many preachers have come and gone from Atlanta and the area while Brother McPherson has stayed and labored. Brother Goodpasture was preaching at Seminole when Brother McPherson came to Atlanta. Concerning "Brother Mac" he said "Brother McPherson was a substantial addition to the Atlanta forces. He was a Christian gentleman. In every way he was cooperative in the general growth and development of the cause in the Gate City. His contribution to the work in Atlanta and Georgia was, and is tremendous."

Later, J. Marvin Powell came to work with Seminole in Atlanta. His relations with "Brother Mac" caused him to write, "No preacher can stay at one place as long as W. D. McPherson stayed at Moreland Avenue without being an extraordinary man. I would characterize him as a diligent student, an excellent pulpiteer, a splendid teacher, a warmhearted personal worker and withal a Christian gentleman. When we were in school together at David Lipscomb, forty-five years ago, he was recognized as a young man of stability, character, and promise. We served together in Atlanta for twelve years. It gives me no little pleasure to pay tribute to my friend and brother in Christ, W. D. McPherson."

Another co-laborer in Atlanta was H. Clyde Hale. Writing about his experience with "Brother Mac" he said, "I first met Brother McPherson when he came to Atlanta to preach for Moreland Avenue. He not only worked diligently with the congregation as her minister, but was a faithful, sound gospel preacher. I consider him one of our top-notch preachers." Only eternity will reveal the amount of good which resulted from the labors of Brother and Sister McPherson. But one thing is certain, they have made a mark in Atlanta and the state of Georgia that will not soon be erased.

On January 1, 1972, Brother McPherson retired as the full time Minister. He continues on with Moreland Avenue and will serve in whatever capacity he is needed. He will teach and visit as he is able to do. He has problems with his eyes which greatly limit his driving. However, the doctor says that in time his vision will be restored sufficiently that he can drive as usual. His wife is having similar problems, but hopefully hers will be corrected also.

Our prayers and best wishes attend the McPhersons in these latter years of life and service in the Master's kingdom. Not only ours, but those of the multitude of friends and brethren everywhere.

-J.V. Copeland, Gospel Advocate, 11 May 1972, page 293-294. Note: This is a timed piece. Some of those enlisted as living may be now deceased.
Webpublisher's Note: Brother McPherson spent the last years of his life living in Conyers and working with the church there. He passed away 27 February 1995, and was buried in the Westside Cemetery in Atlanta.

Directions To The Grave of Brother And Sister Mac

Douglas & Thelma McPherson were buried in Westside Cemetery in West End, Atlanta, Georgia. Enter the cemetery and take the first right. Follow the yellow line all around to the back of the cemetery. Right after the circle and the end of Section 35, take the first left (on the right side of the split road), and head down and stop on the left toward the end of the drive. Go into the section to the right and the graves are in about 10 rows. 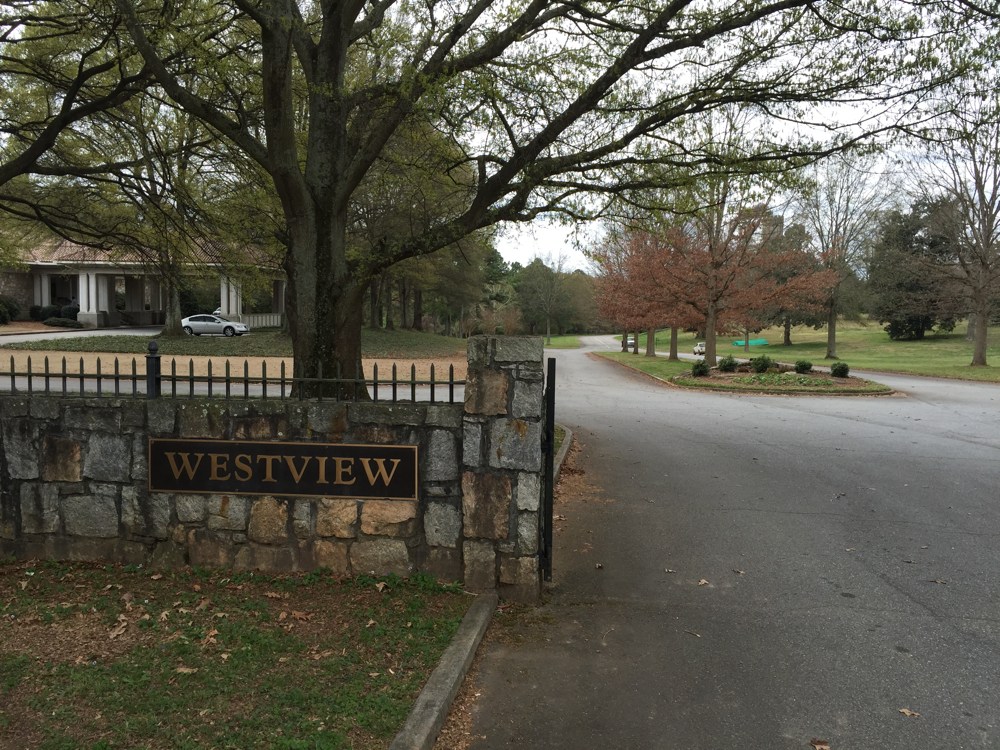 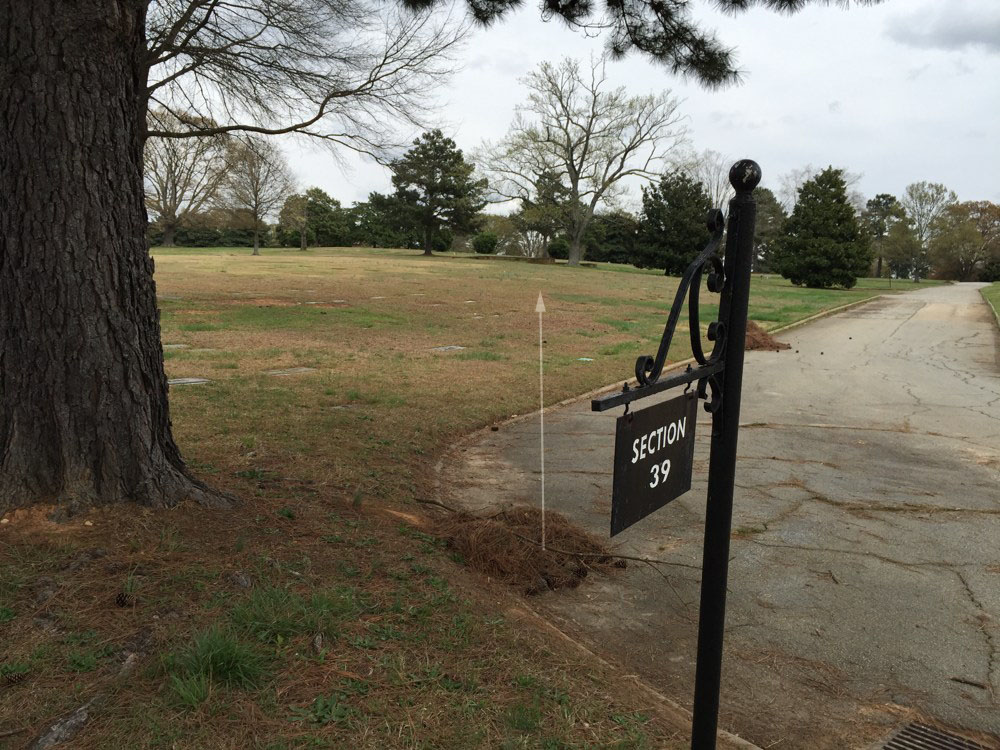 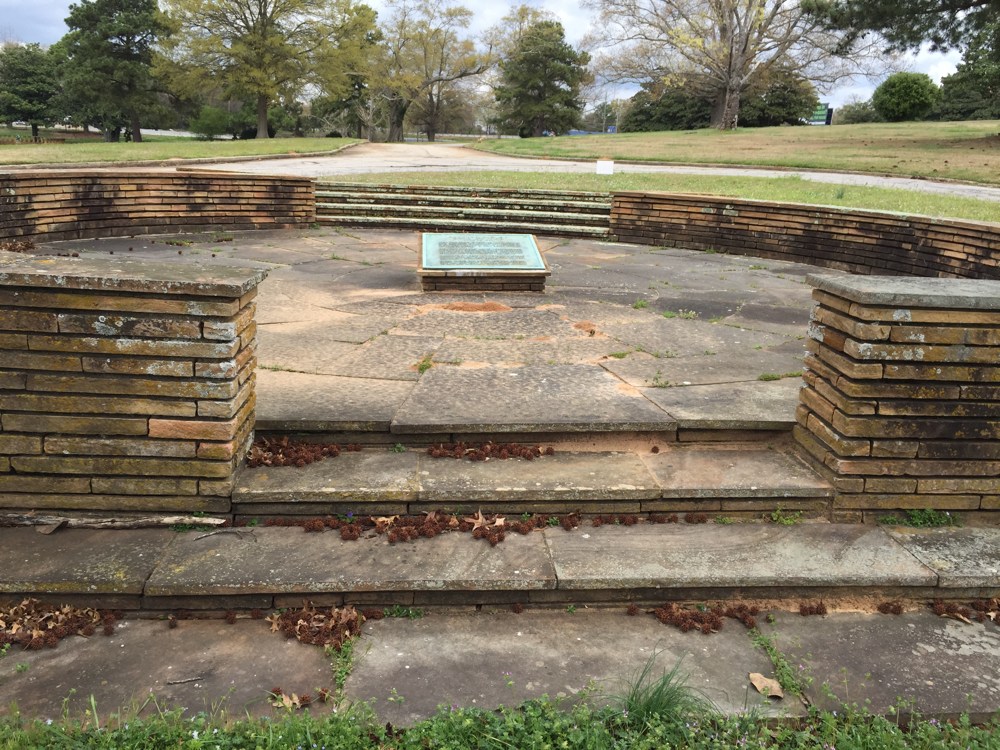 Monument near the grave of W.D. & Thelma McPherson 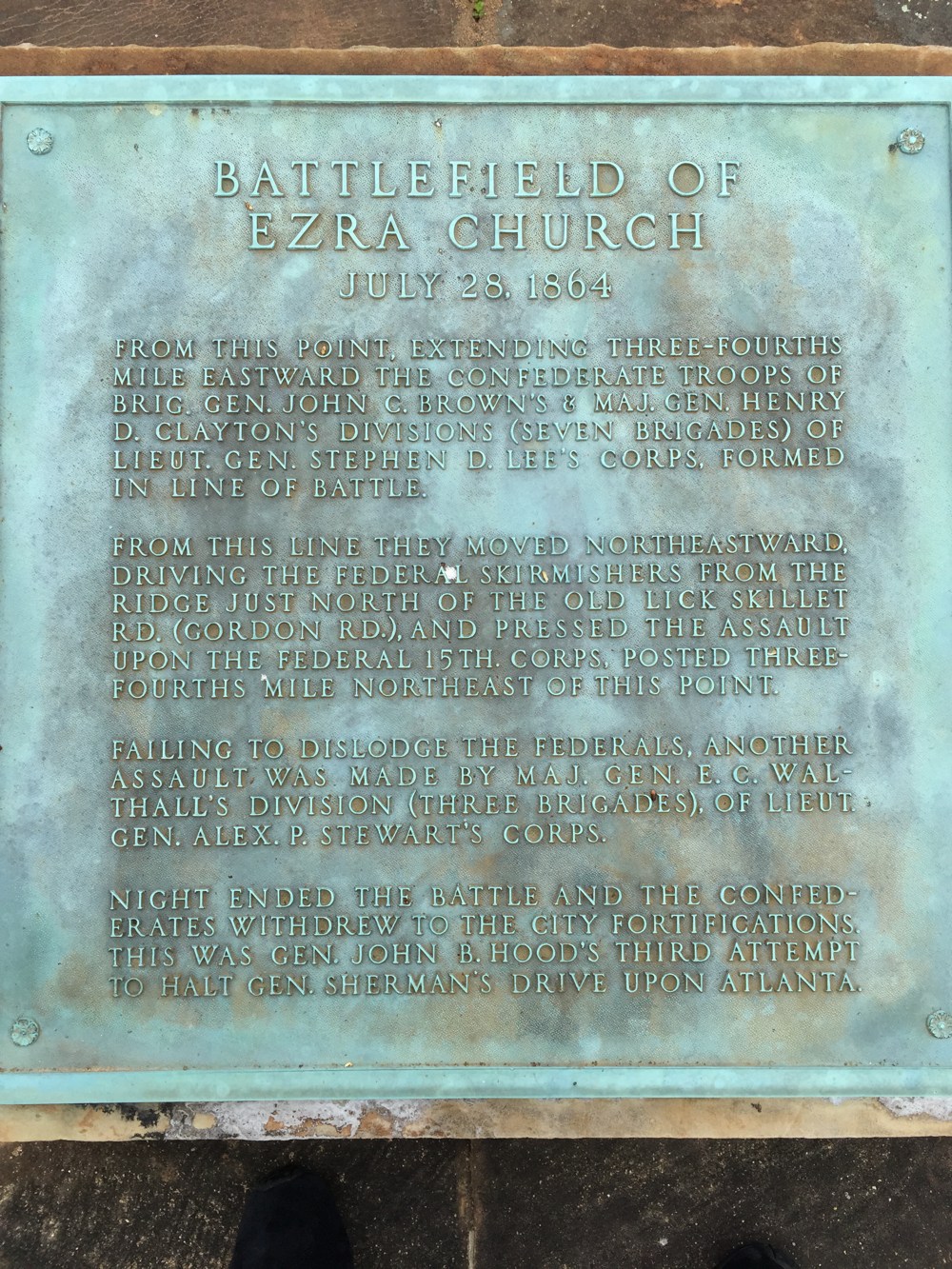 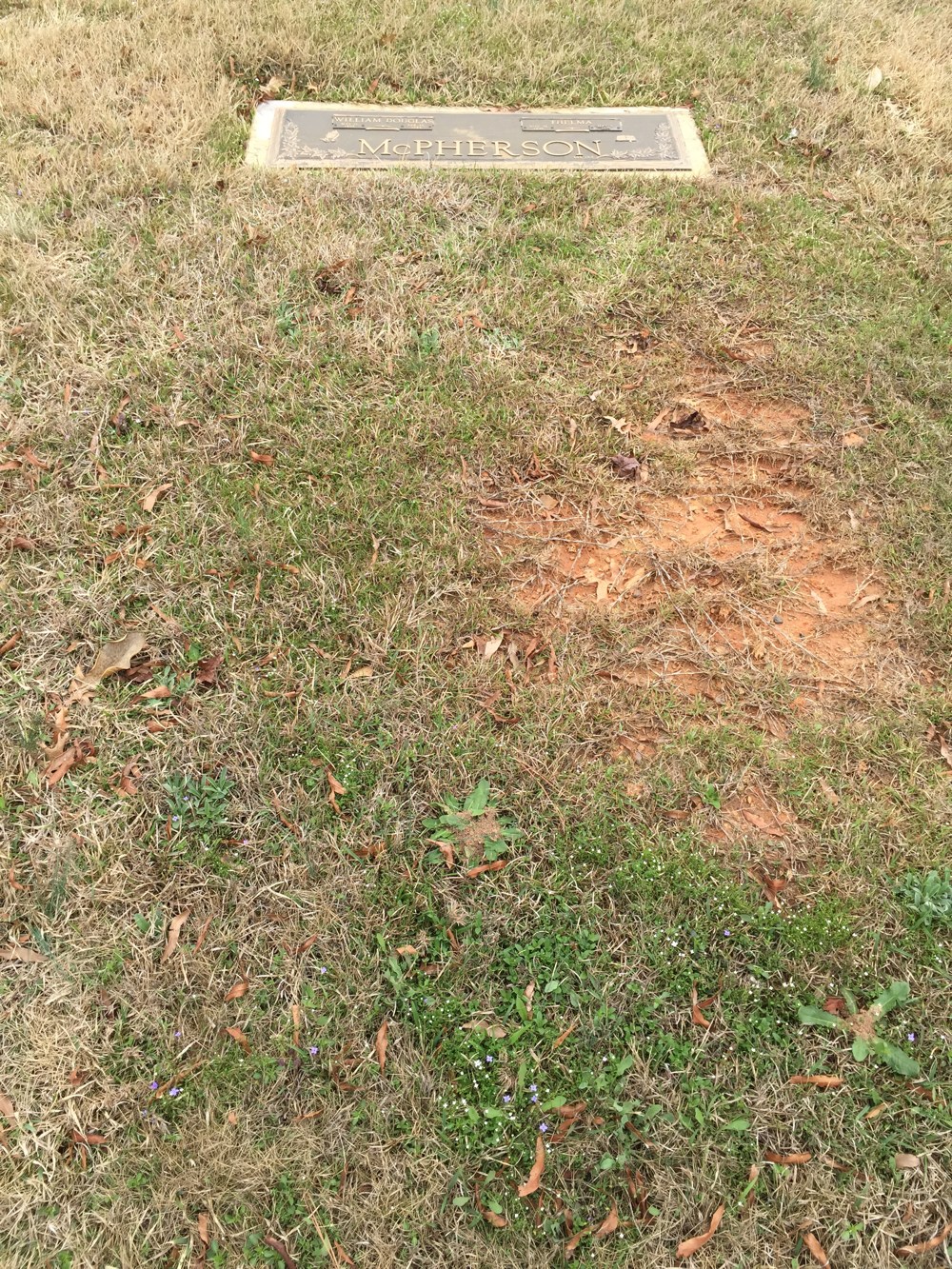 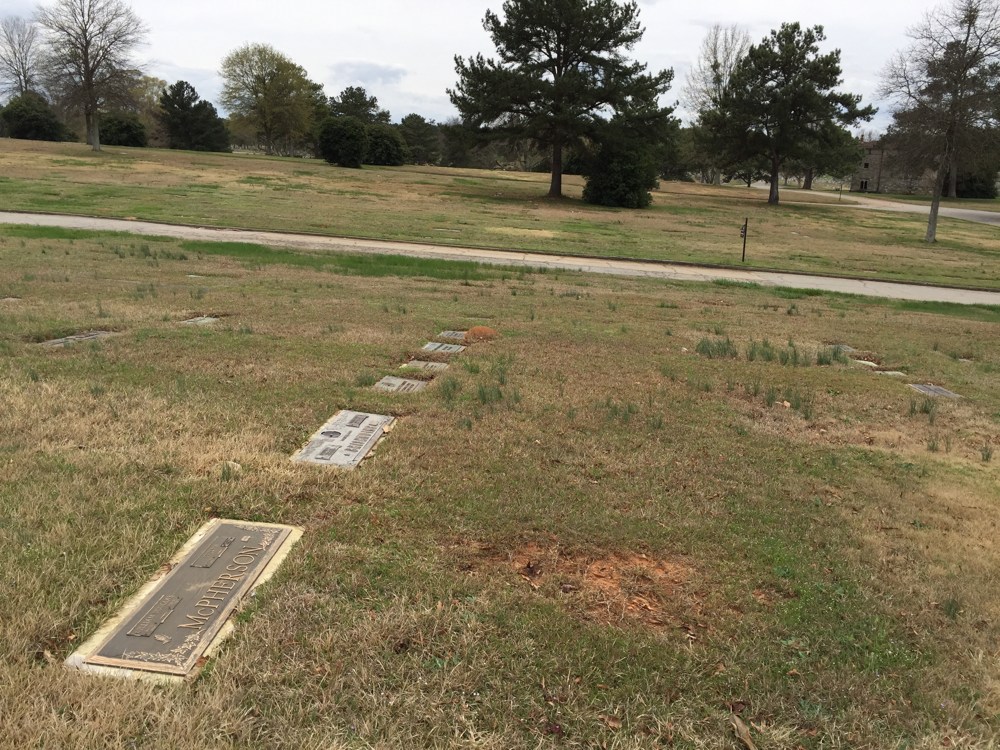 Looking To The South From The McPherson Plot 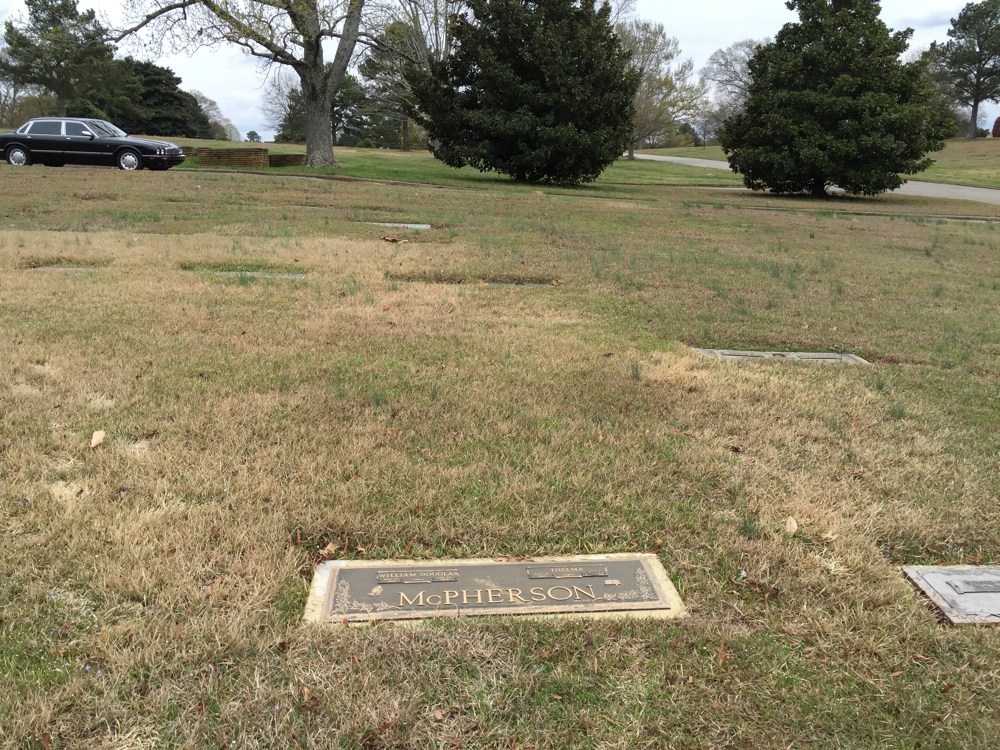 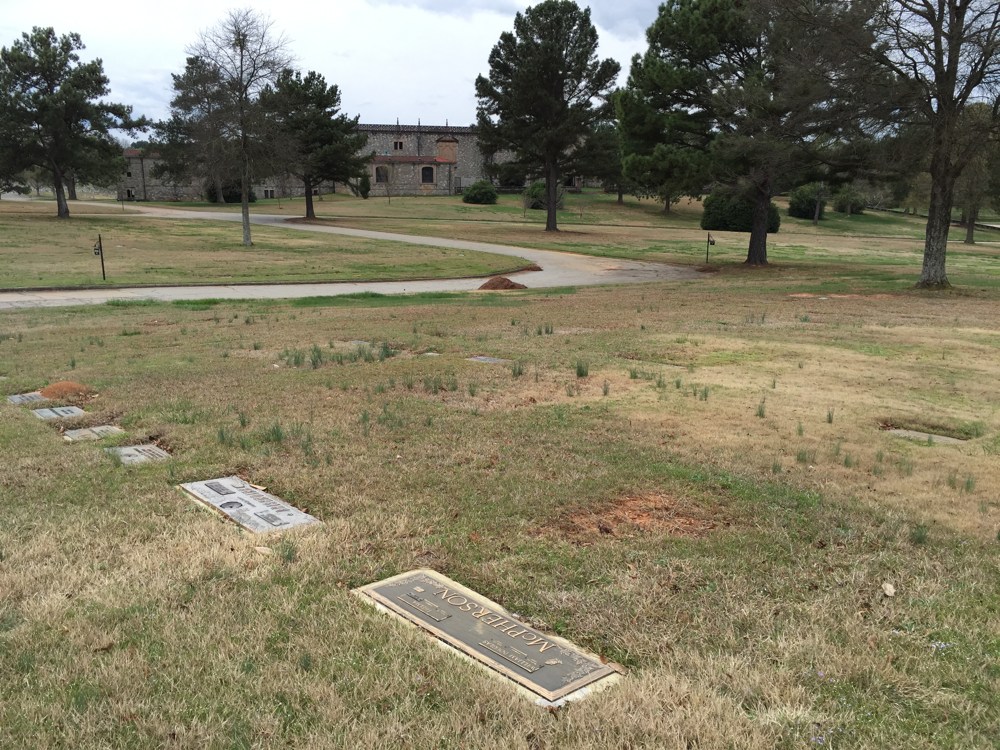 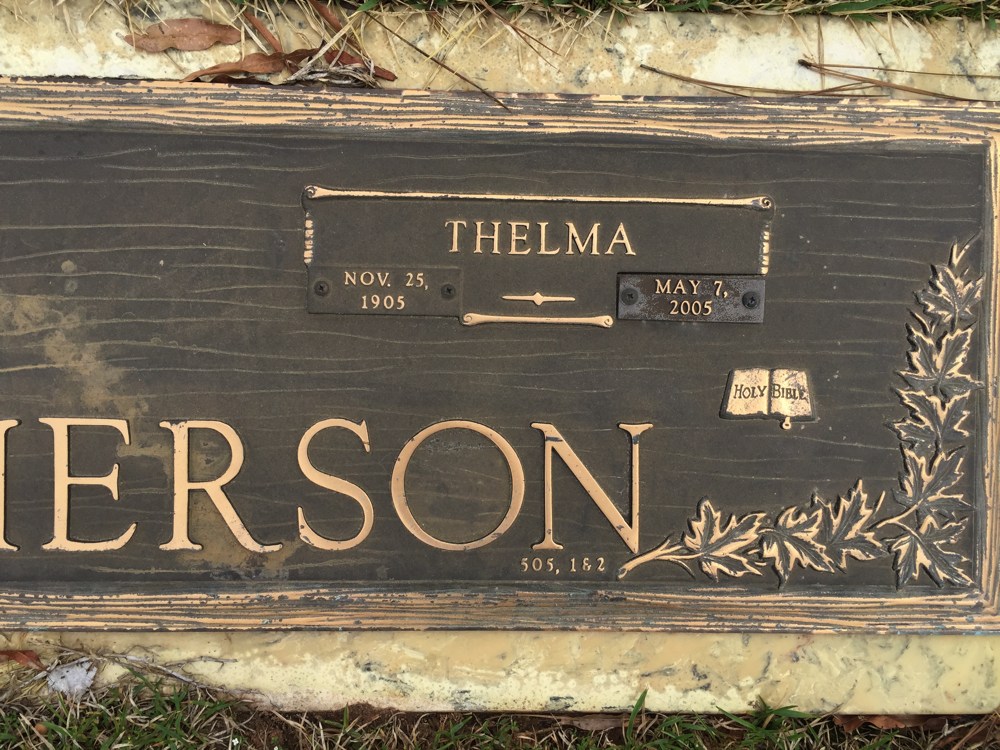 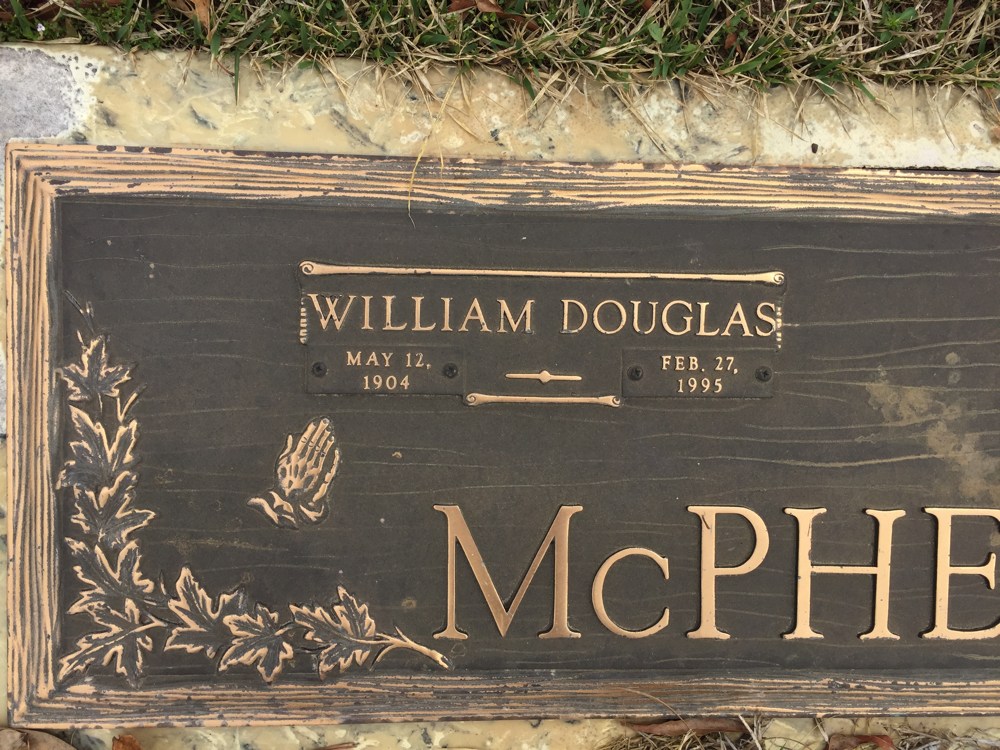 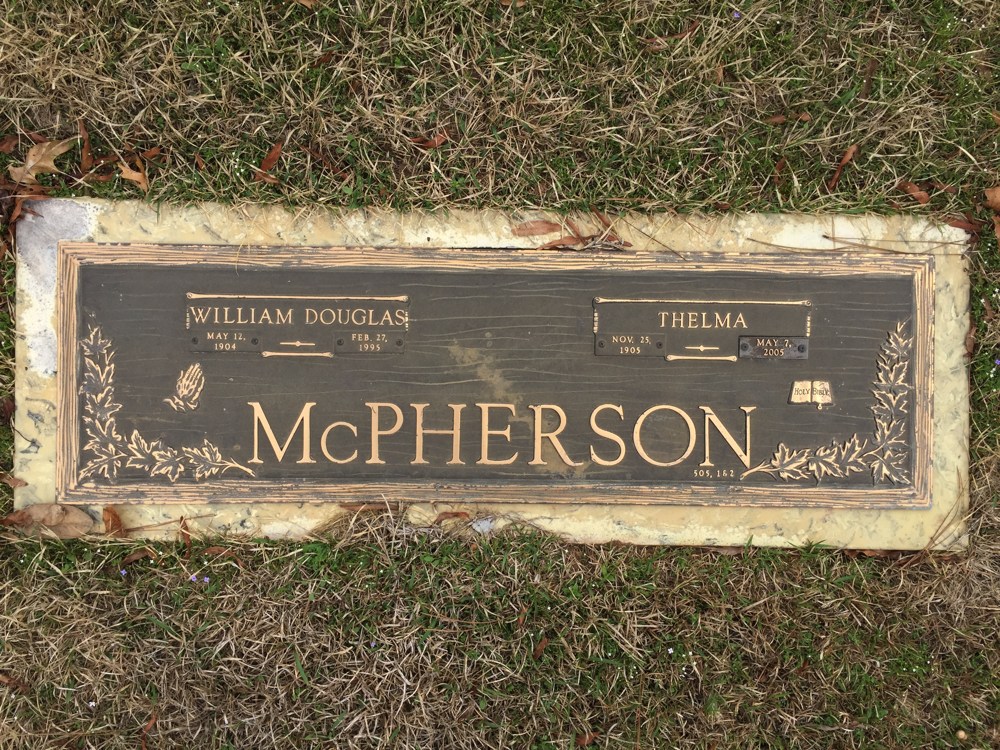