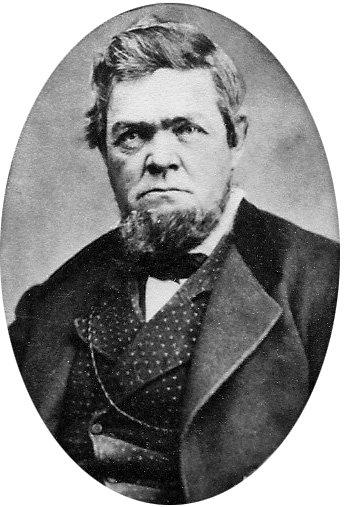 Biographical Sketch On The Life Of Elder Peter Hon

During the year of 1791 a group of pioneer Presbyterians on the harsh Kentucky frontier began felling trees, hewing, notching and fitting logs in the process of erecting a house for worship. Because of the extensive cane thickets across that particular rise in the fertile central Kentucky landscape, the name of "Cane Ridge" came rather spontaneously.

During the same year in which the logs were being put into place at Cane Ridge, through the cane breaks eight miles east in a colony of German immigrants, a baby boy was born to the wife of a minister of the Church of the Brethren. Members of that particular group were commonly referred to as Dunkers, or Dunkards. They had recently settled in the southern extremity of an area which soon became Nicholas County, Kentucky. The Dunkard baby boy, designated as Peter, was destined to become an effective frontier Restoration preacher and thousands would be influenced by him. At the age of twenty, Peter Hon was baptized three times face forward, and began preaching soon thereafter.

It is believed that two forces, one born from within, and the other from without, shaped the course of Hon's life. First, his profound respect for the Scriptures very early led him to accept them as the exclusive authority in matters of religion. This often had him at odds with the Church of the Brethren.

Secondly, being reared so near the geographic center of Barton Stone's area of greatest influence, it is believed that Hon became a beneficiary of such. Indeed, during the lad's tenth summer the Great Revival of 1801 began at Concord, which was located less than three miles from Hon's home.

Reflecting upon the life of Hon in the July, 1876 issue of Apostolic Times, contemporary L. H. Reynolds declared that he had always taken the scriptures as his guide and quoted him as saying that "I have always contended that baptism was one of the means God has ordained for remission of sins." By 1815 Hon, along with Joseph Hostetler, was moving away from some of the basic doctrinal positions of the Dunkards. Soon thereafter he and Hostetler were branded as heretics and expelled from the group.

In 1824 Hon became the minister at East Union, Kentucky, his home community, and continued in that capacity for fifty-two years. Log Union, located north of the Licking River in Fleming County, listed him as their preacher for fifty years. Obviously, the congregations were served on a rotating schedule.

While Joseph Hostetler was promoting Restoration principles in Indiana, in Kentucky Peter Hon was apparently the most important link between congregations of the Church of the Brethren and the Restoration Movement. After their departure from the Dunkards, Hostetler and Hon were successful in nurturing a number of dissident Brethren in southern Indiana, southeastern Ohio, and northern Kentucky eventually bringing them to accept the Restoration plea.

The efforts of Hon and Hostetler were expanded during the years of 1827-28 when, in a joint effort with John Wright of Indiana, they were successful in bringing a group of Independent Baptists to join them in the Restoration cause. Both former Dunkards and Baptists adopted "Christian" as their only religious designation.

During this time Hon was brought into contact with an exceptionally successful "Reformer" with whom he was destined to be associated for many years in restoration work. Concurrent with the above mentioned date in the work of Hon and Hostetler, in 1827 Raccoon John Smith of Montgomery County was charged by the North District Baptist Association with preaching doctrine contrary to Baptist Practice. Therefore, a confluence of ideas and events began merging which eventually formed grounds for common understandings between Hon and Smith, and consequently between those within their spheres of influence who were of the Stone and Campbell persuasions. For forty years the two pursued common objectives, often preaching at the same congregations on a rotating basis.

The northern boundary of the North District Baptist Association, which was formed during the early part of the eighteen hundreds, conformed to a line which separated Bourbon and Nicholas Counties from the counties of Clark, Bath and Montgomery. After 1804, the year of the "Last Will and Testament of the Springfield Presbytery" document, that boundary tended to become a line which separated the Baptists to the south and the "Stoneites," or "Arians," to the north. The line continued to be observed even after the majority of the congregations of North District Baptist Association was converted by John Smith to the cause of the Reformers.

Extant records indicate that former Dunkard Peter Hon crossed the "Demarcation Line" into the territory of the North District Baptist Association and began propagating his Restoration persuasions. By an old deed, dated in 1833, it is known that as early as 1821 Hon organized a congregation on the waters of Stepstone Creek in Montgomery County, and that this group, if not immediately, very soon began to be designated as a Church of Christ. The exact statement within the deed refers to the "trustees of the Church of Christ constituted at the house of John Meyers by Peter Hon on the twenty-fourth day of March, 1821."

After examining the terminology within the deed for the property on Stepstone Creek, Dr. R. L. Roberts, respected Restoration historian of Abilene Christian University, observed that:

The deed is of special interest because 'The Church of Christ' and 'Christians' are used as Stone used them. The proximity of East Union to Concord and Cane Ridge suggests the possibility of influence from men like John Rogers and Stone. Likely Hon knew both of these men before any of them knew of the Campbells.

It appears that the assumption of Peter Hon's Stone influence is a sound one since the establishment of the church on the waters of Stepstone Creek in 1821 predated by two years the first issue of the Christian Baptist, which initially provided, by own admission, Smith's Campbell influence. The congregation established by Hon was located only about three miles from Smith's Montgomery County farm and four miles from the latter's loyal Spencer Creek Baptist Church. It was already in existence for a year when Smith confessed to the Baptist congregation at Spencer in 1822 that "Something is wrong -- I am in the dark -- we all are in the dark; but how to lead you to the light, or find the way myself, before God, I know not."

Even though the exact nature of the congregation located on the waters of Stepstone cannot be ascertained, at this point it is believed that three sound inferences are in order. First, by the process of elimination, and in consideration of evidence that Hon had been influenced by Stone, the logical assumption is that he established on Stepstone Creek in Montgomery County a congregation similar to those of the Stone persuasion. If that assumption be not sound, one must then assume that former Dunkards Hon and Hostetler were responsible for a Restoration initiative independent of those of both Stone and Campbell.

Secondly, the discovery of the above mentioned document somewhat alters the generally accepted view that the Restoration initiative in Montgomery County was the exclusive result of John Smith's efforts as he was influenced by Alexander Campbell. Had the deed for the property on the waters of Stepstone Creek not revealed the date of the work of Hon, his contribution most likely would have remained in oblivion, inundated by the phenomenal success of Smith in bringing the masses into the camp of the Reformers.

Thirdly, it is very possible that Peter Hon's presence in Montgomery County exerted a "softening" influence upon John Smith which assisted in conditioning him for his significant role in the union of the Stone end Campbell forces in 1832. There is no doubt about the existence of the "Line of Demarcation" between Stone's Bourbon and Smith's Montgomery Counties. Dr. Adron Doran, President Emeritus of Morehead State University and a meticulous student of Restoration History, has observed that:

There is no question but that there was a distinct cleavage between the Stone Christians in Bourbon, Nicholas and Fayette Counties and the Campbell Reformers in Clerk, Montgomery end Beth Counties, geographically end Biblically.

Of that chasm which by necessity had to be abridged before union could occur, it is believed that historian Doran is accurate when, after evaluating the evidence, he observed that "Peter Hon helped bridge that gap." Indeed, by temperament, orientation and geography; Hon was so situated that he could serve as a catalyst in bringing Smith and his Campbell influenced Reformed Baptist background into contact with Barton Stone and John Rogers. It appears that further research will definitely strengthen position.

WELL RESPECTED DURING HIS TIME

The "Quiet Catalyst" was not one to become conspicuous by strongly asserting himself, but while assuming a low profile Hon earned the respect of multitudes because of his love for the truth and his concern for lost souls. A report which appeared in the May, 1843 issue of the Millennial Harbinger conveys an appealing disposition. Hon writes:

I have had a large family to raise, and my situation would not admit to extending my labors over a large scope of country. I have, therefore, labored in my immediate neighborhood and vicinity; and have been able, through the blessing of the Lord, to gather together and plant some seven or eight churches, all of which are in flourishing condition, and walking in love. "... I have been the happy instrument of adding to the church, since April last, some five hundred persons. The Lord be praised, for the glory is due to him!

Alexander Campbell responded to the report by observing that:

I am happy in having formed a personal acquaintance with the excellent brother Hon and having heard, from testimony of the most satisfactory character, a report of his Christian excellencies, I can candidly salute him as a brother and fellow laborer in the Lord, and repose the utmost confidence in his statements.

Hon's last years were spent with his second wife on a firm located in the Stepstone community of Montgomery County where he had established the congregation fifty-five years before his death.

L. H. Reynolds, a neighbor and fellow evangelist, observed that "From his own lips, and also from his diary, we learn that he baptized six thousand persons." Just previous to Peter lion's departure from his earthly sojourn. he made an admirable declaration and a solemn request. Said he:

I have made the Bible my constant companion, and when you think me dying, I want you to place it gently under my head, and let me breathe my life out sweetly thus.

Peter Hon died in 1876 in the eighty-fifth year. He is buried in the old East Union graveyard in southern Nicholas County, Kentucky, in the community where he was born, and where he had preached for more then a half century. 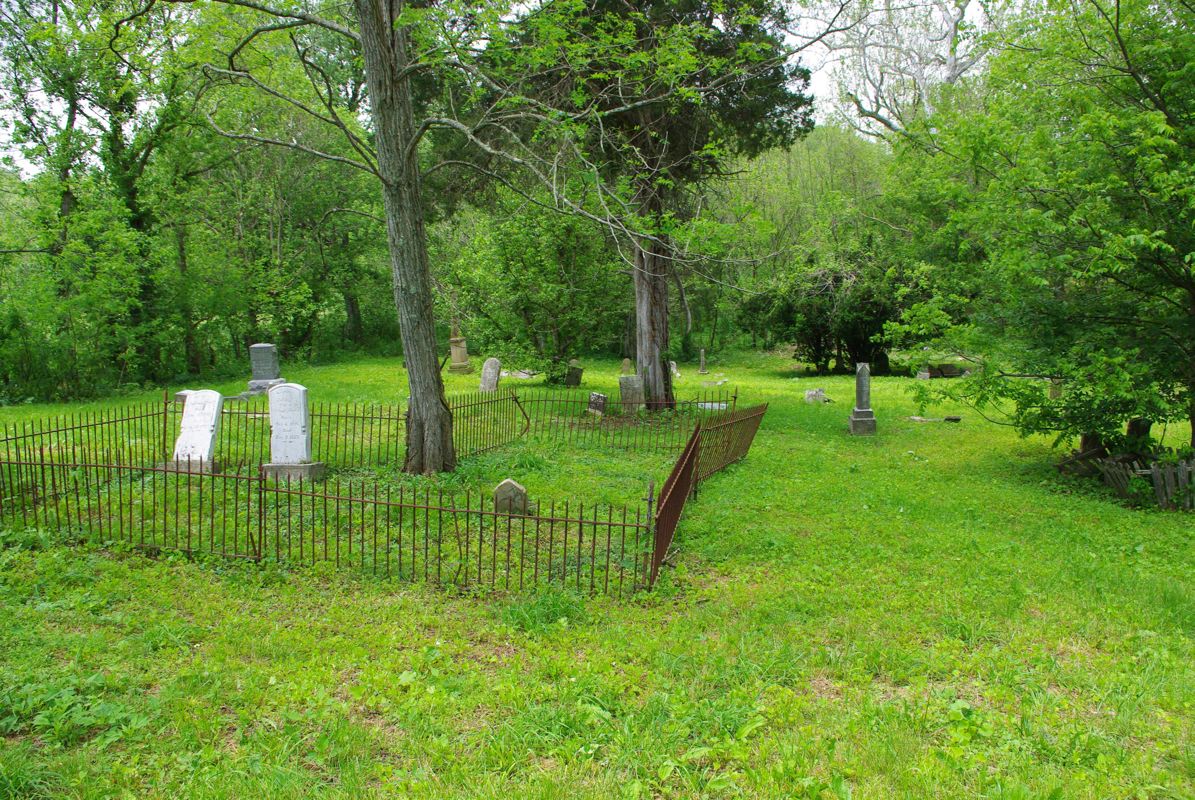 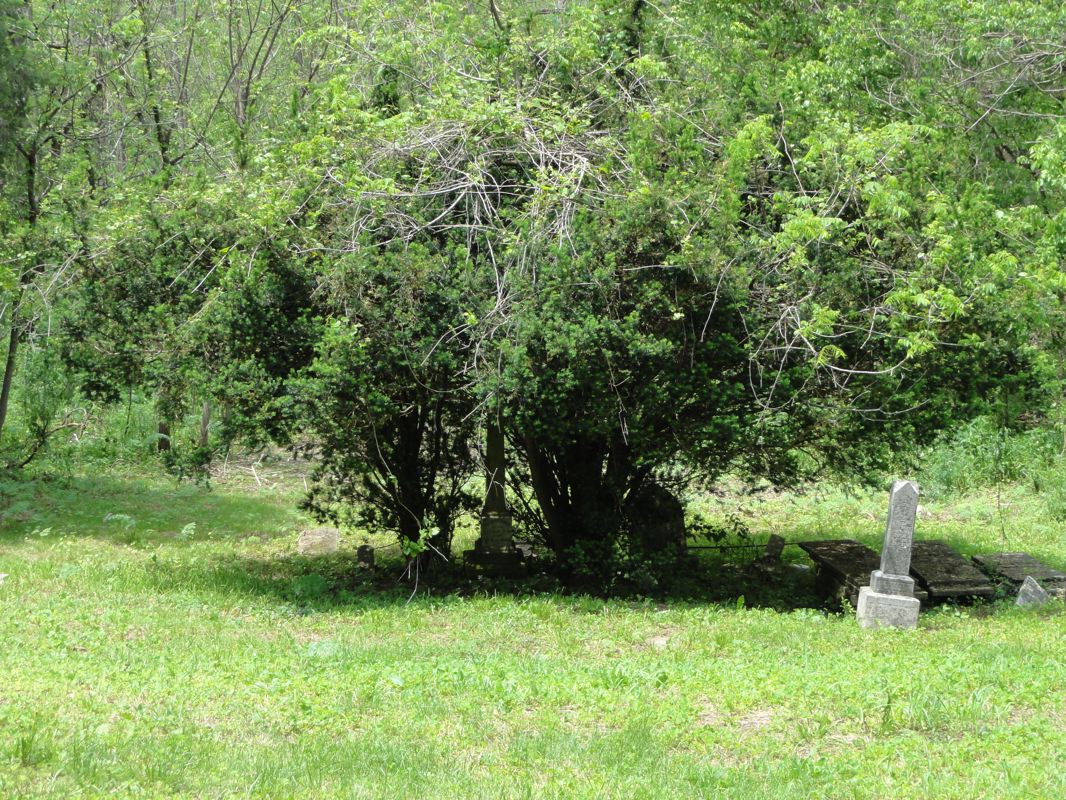 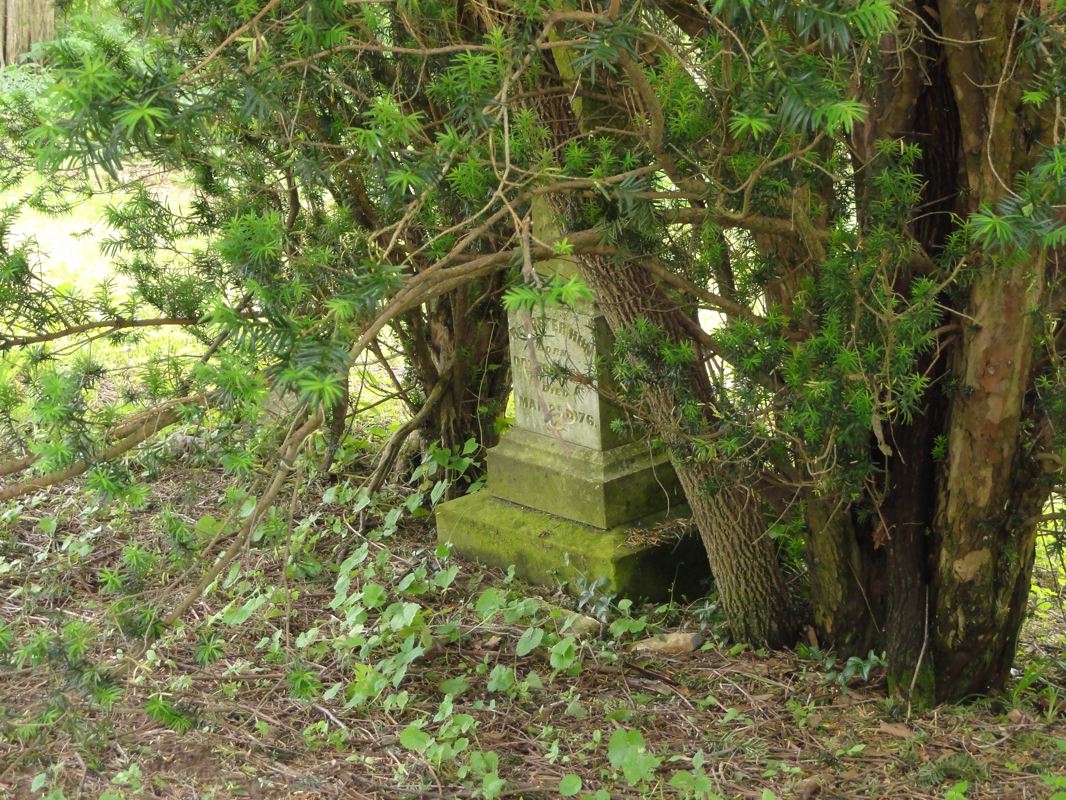 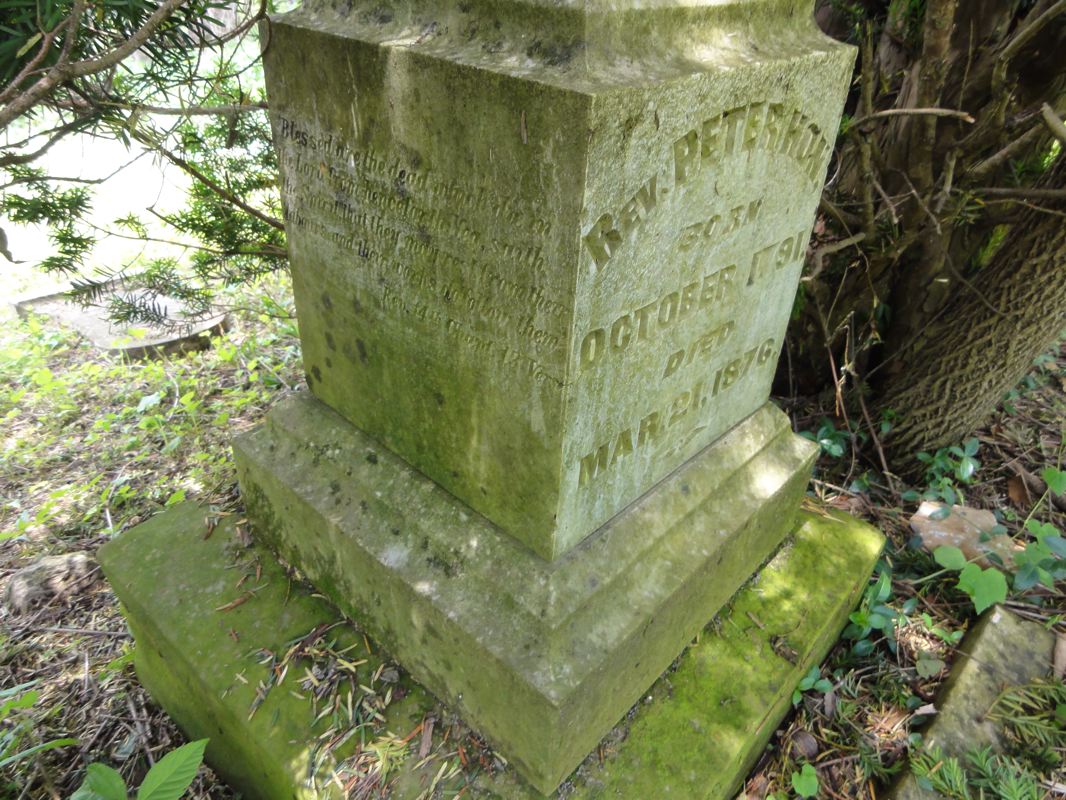 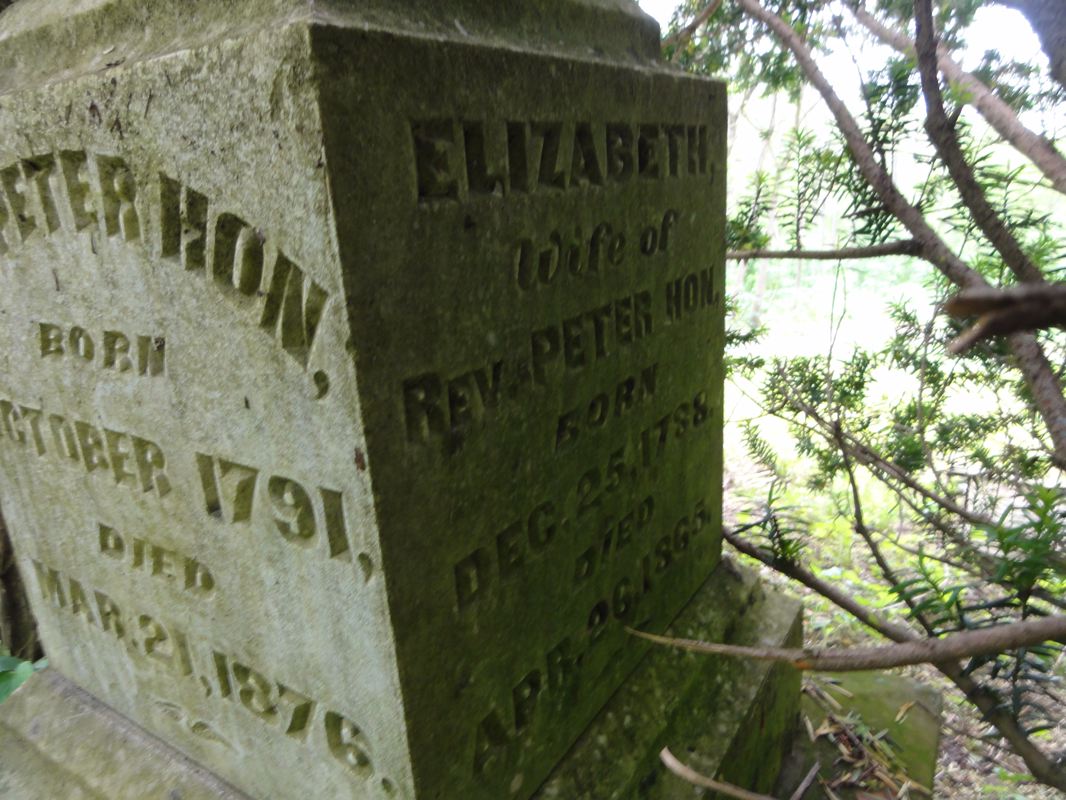 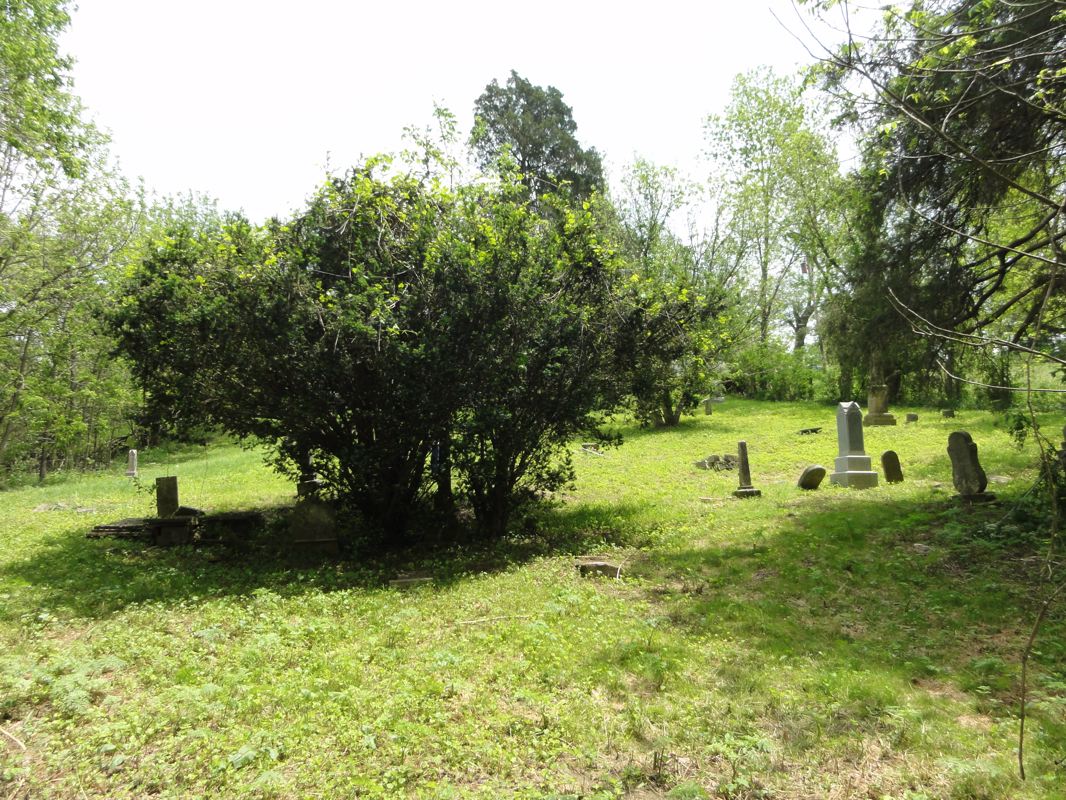 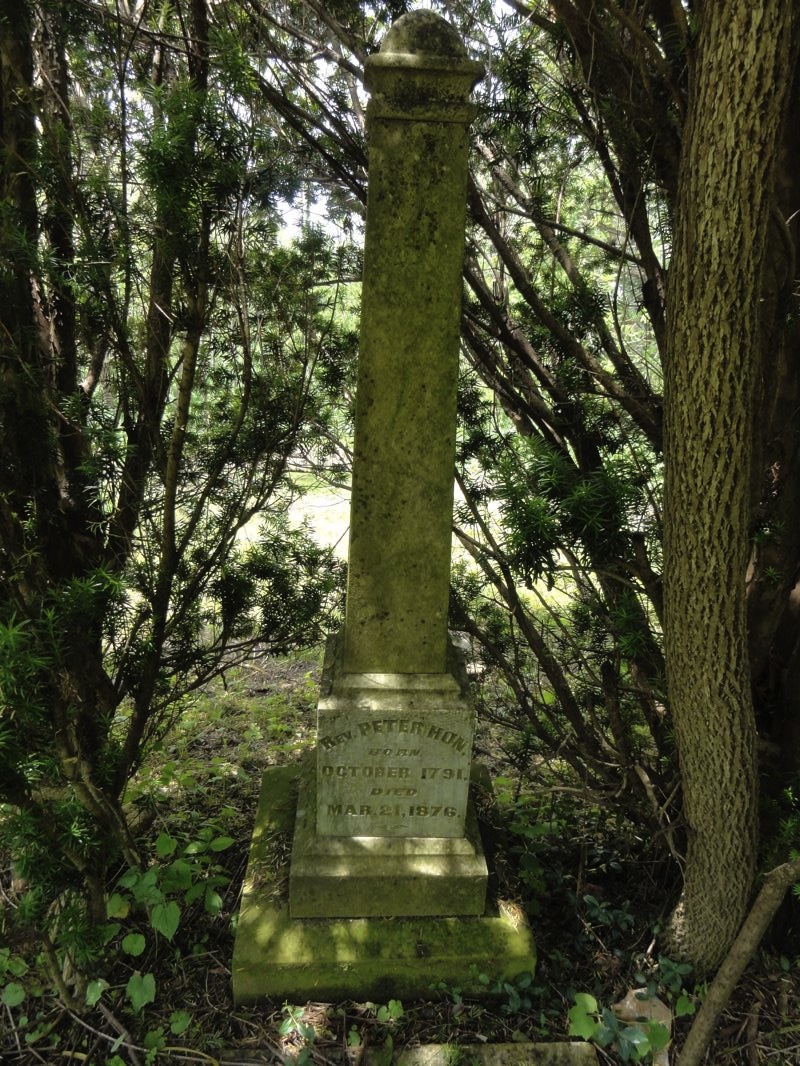 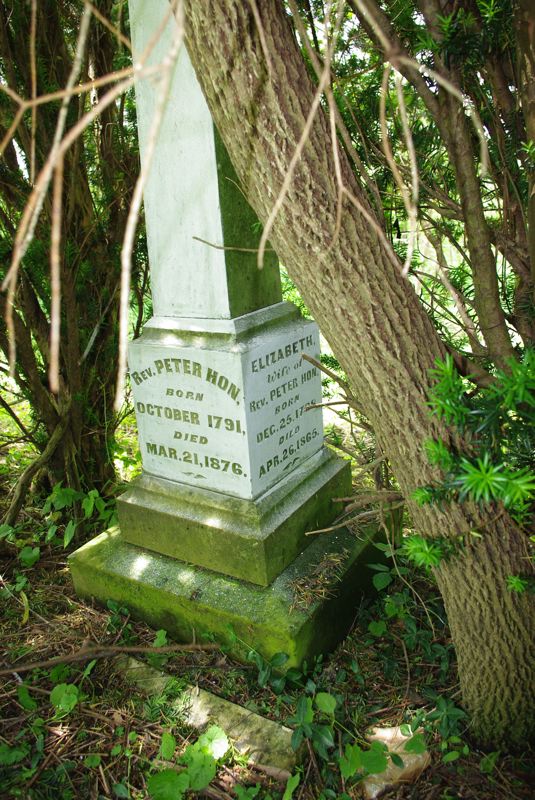 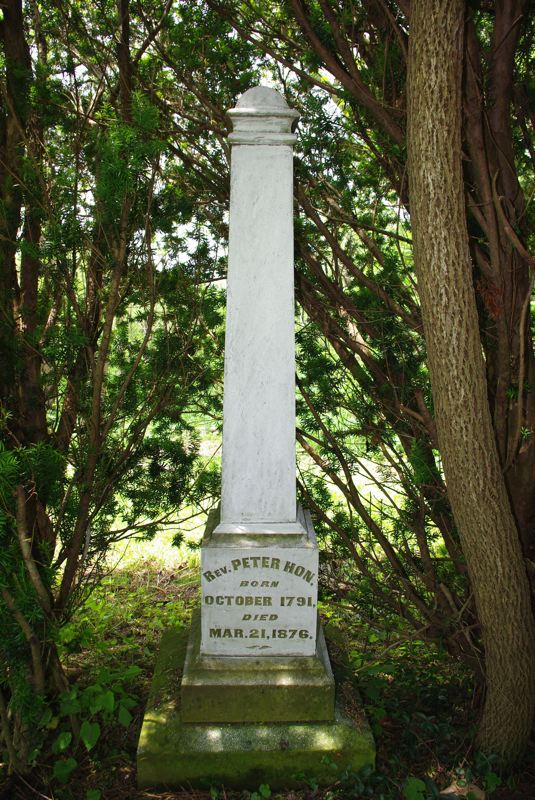 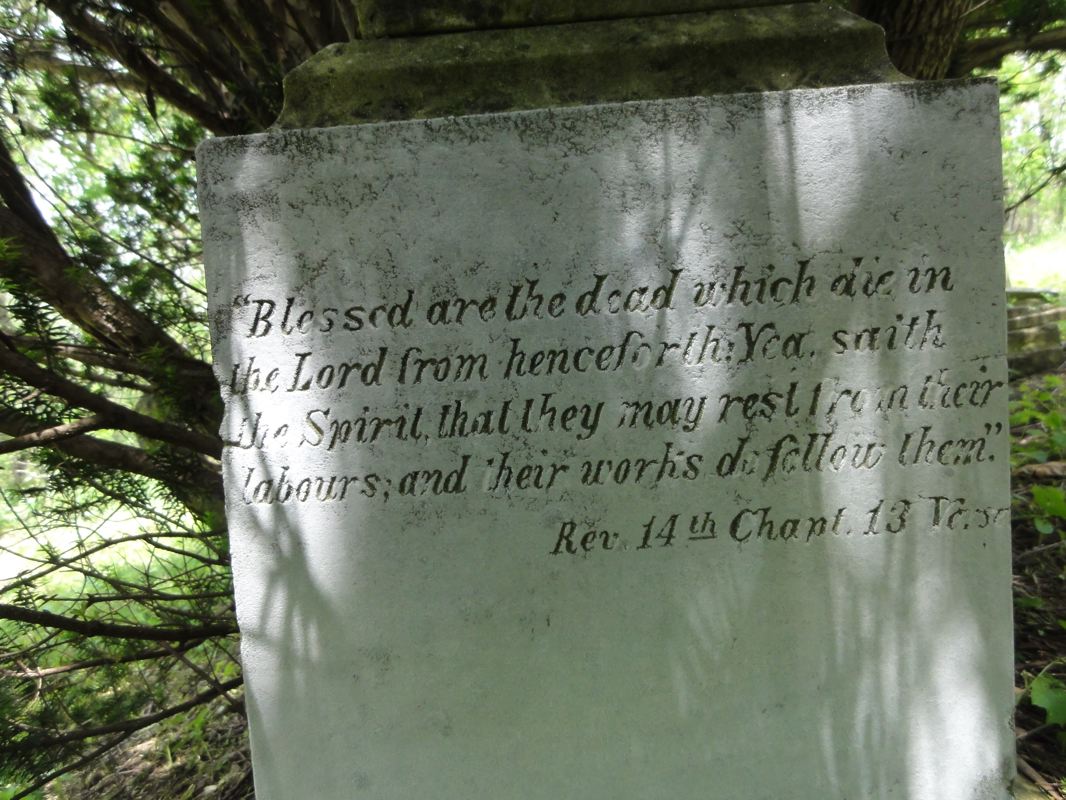 "Blessed are the death which die in
the Lord from henceforth; yea, saith
the Spirit, that they may rest from their
labours; and their works do follow them."
Rev 14th Chapt. 13 Verse 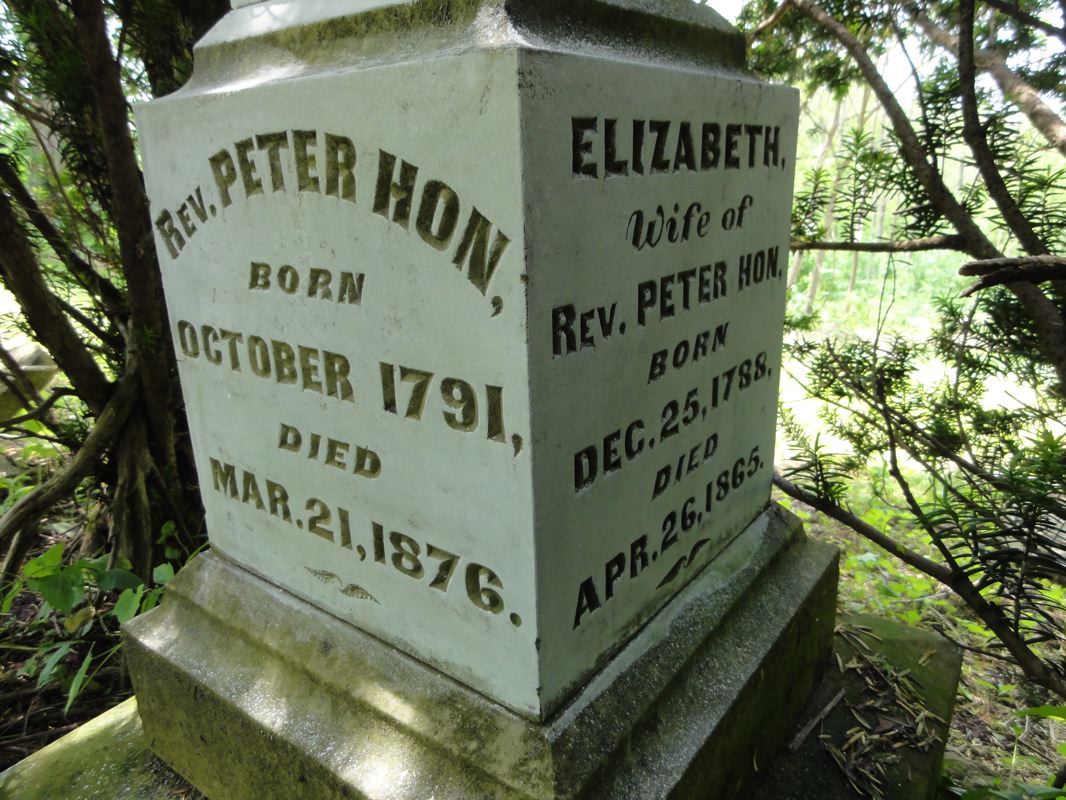 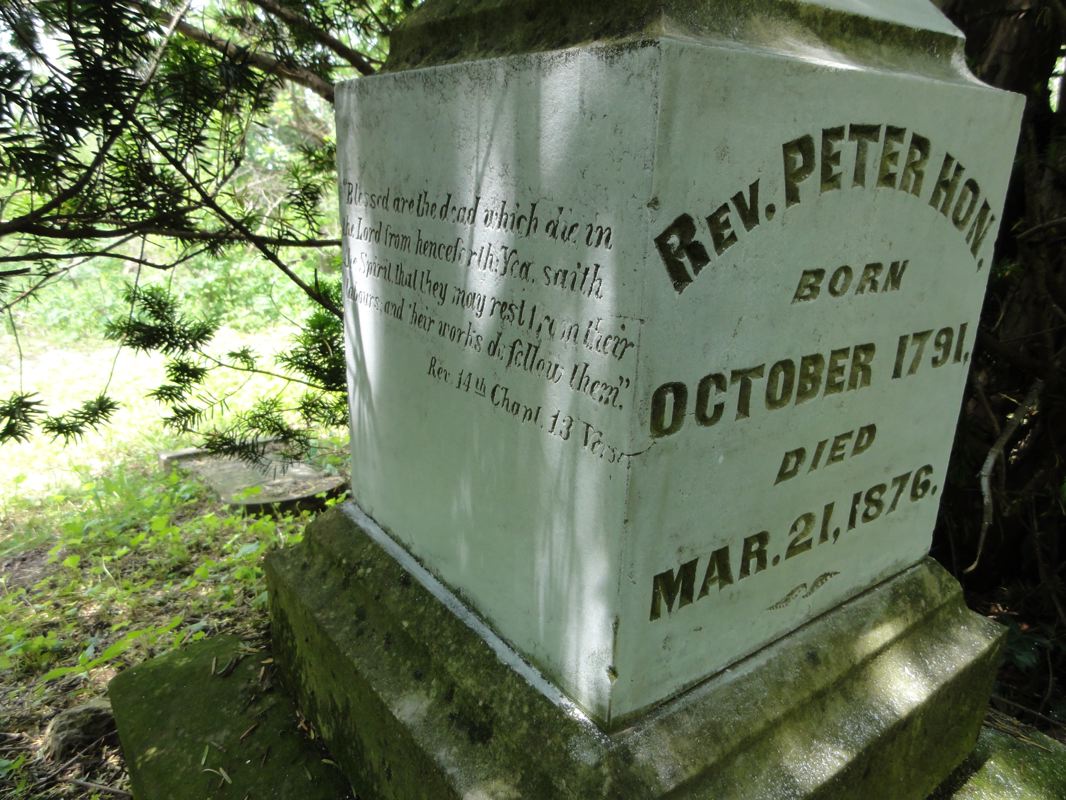 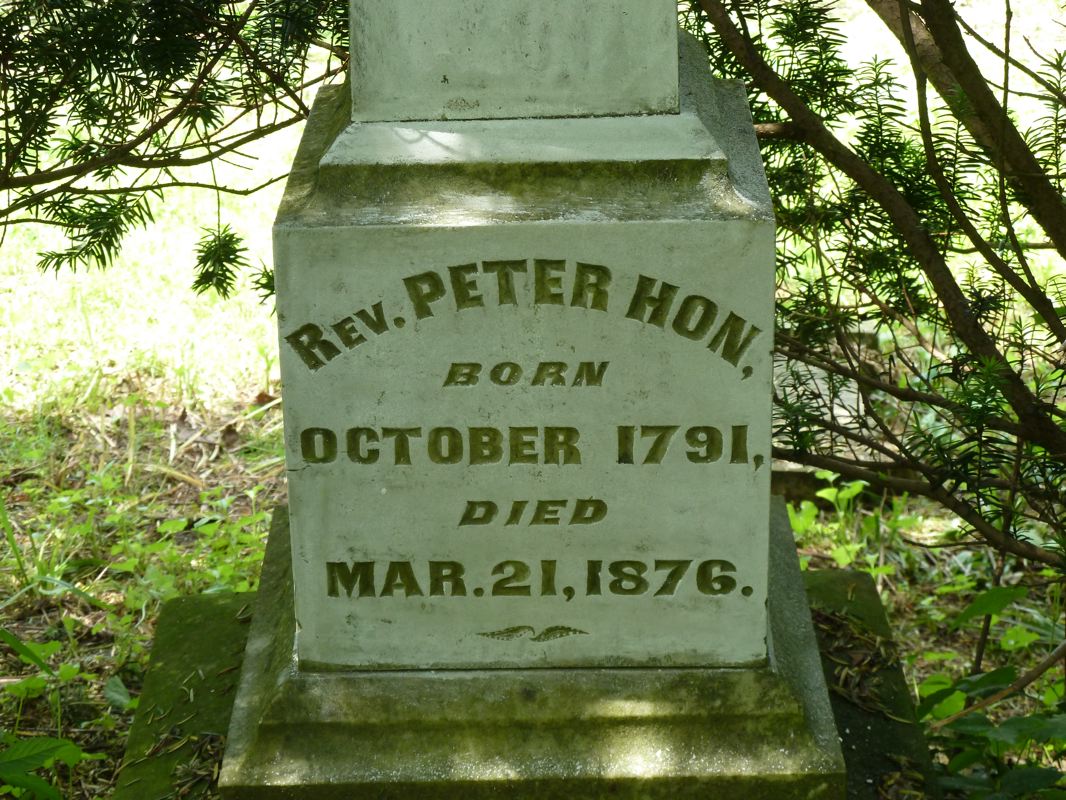 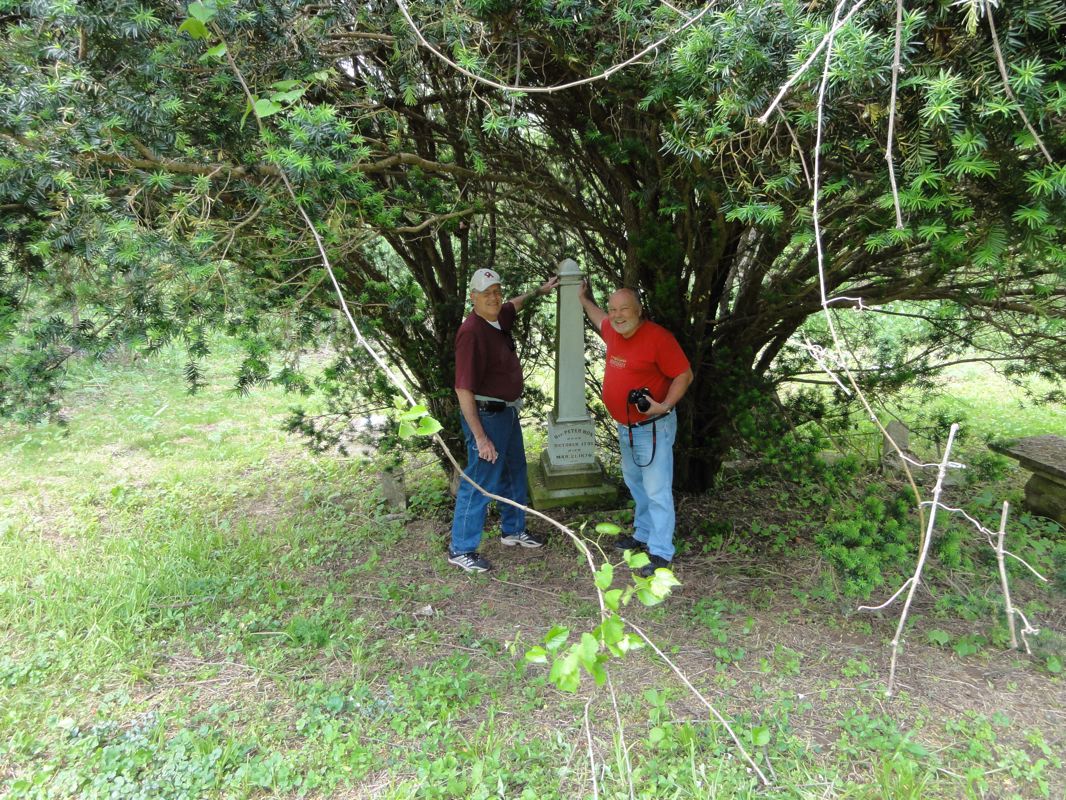 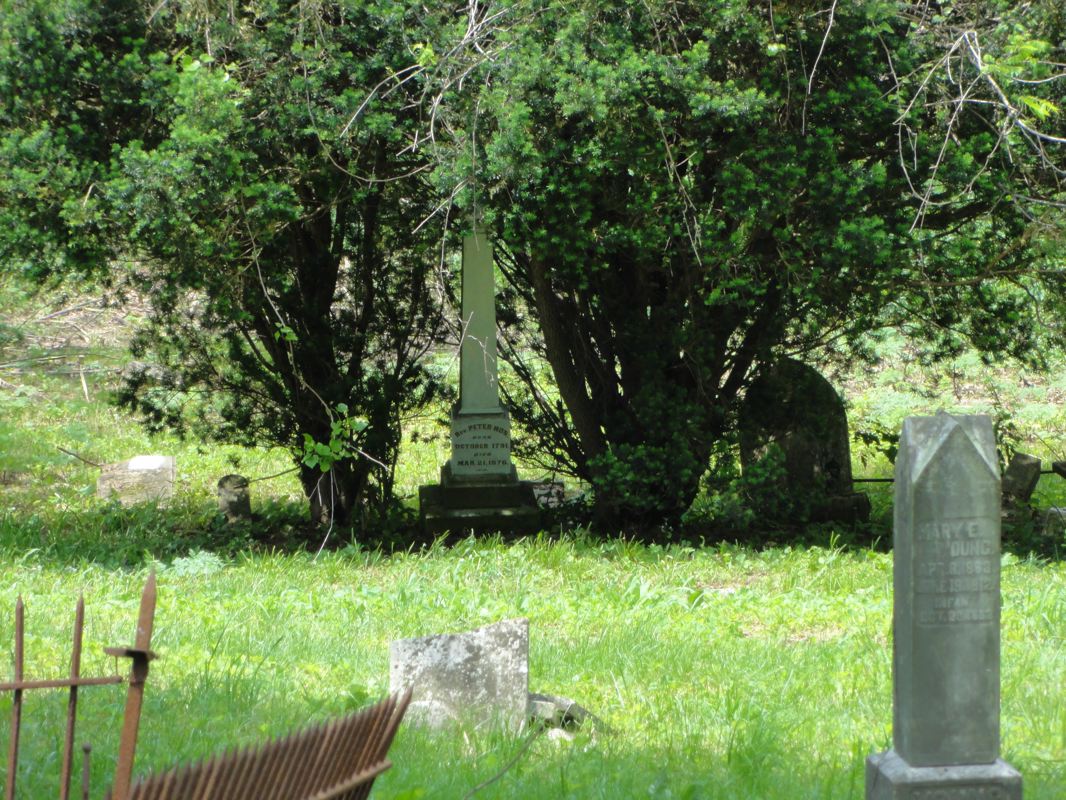 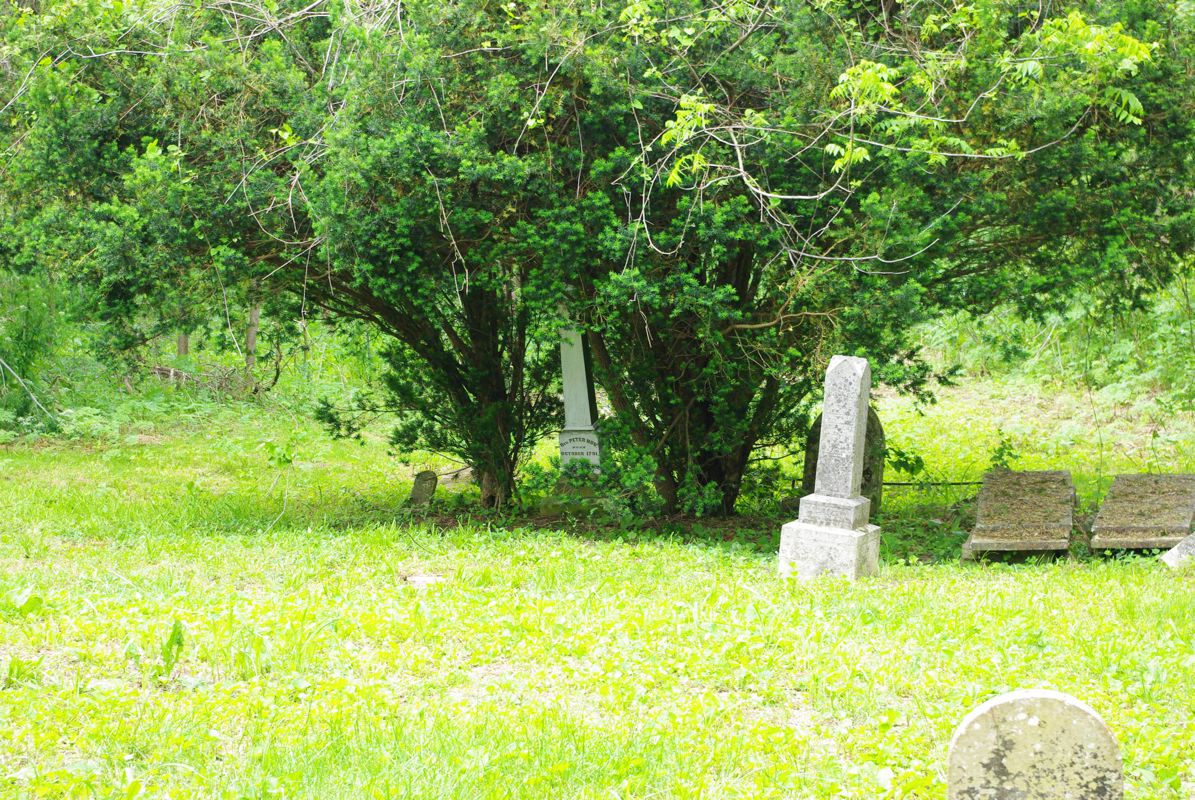 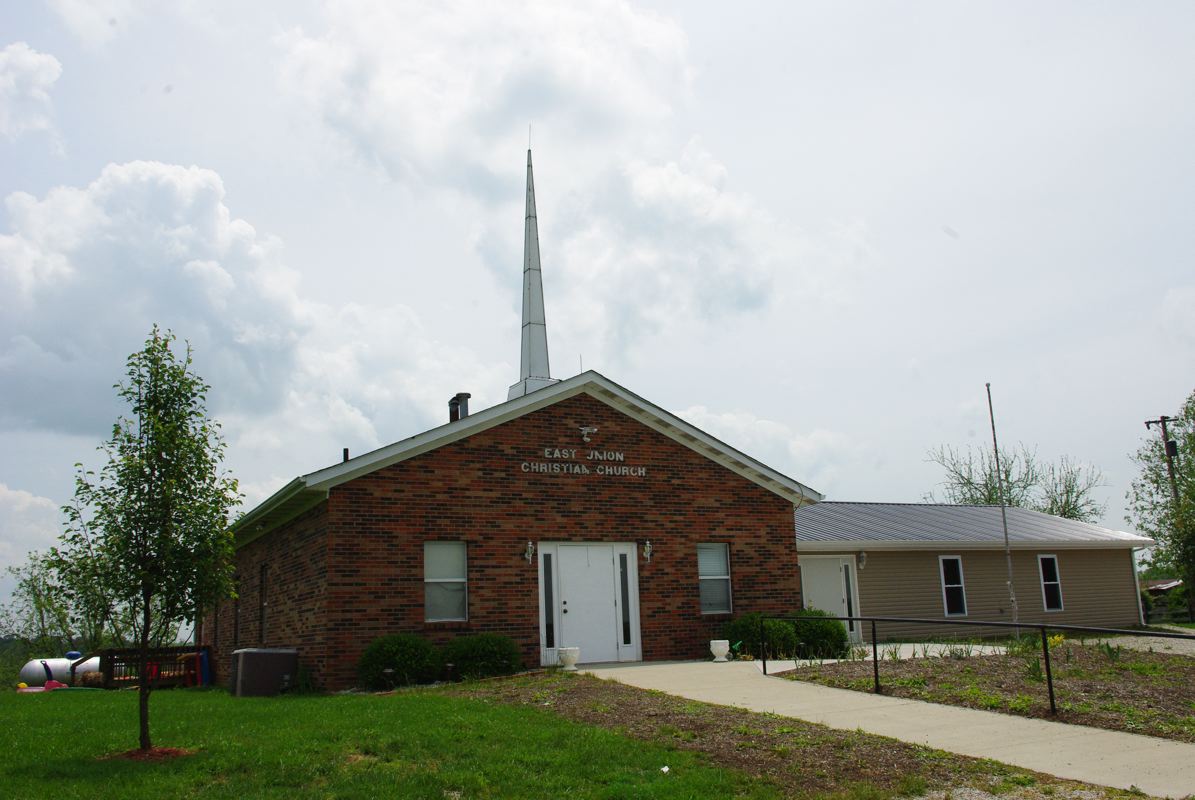 Note: The old church house was destroyed by a fire around 1980. The fire is thought to have resulted from a problem with the gas furnace. It is believed that the July 27, 1980 earthquake that was centered in nearby Sharpsburg had loosened or damaged a gas line. That led to the fire after someone started the furnace when the weather became cooler that same year.
-Best Regards, Mark Vice, New Point, Indiana - Emailed in on 06.24.2020

Webmaster's Note: The new photos above were taken in May, 2011. The grounds of the East Union Cemetery are not always as neatly kept as it was found on this occasion, so getting to the grave of Peter Hon is not always an easy thing to do. These photos were taken by Scott Harp, Tom L. Childers, & C. Wayne Kilpatrick while traveling in the area. Special thanks to these men for making these photos available online.