Biographical Sketch Of Joseph A. Clark 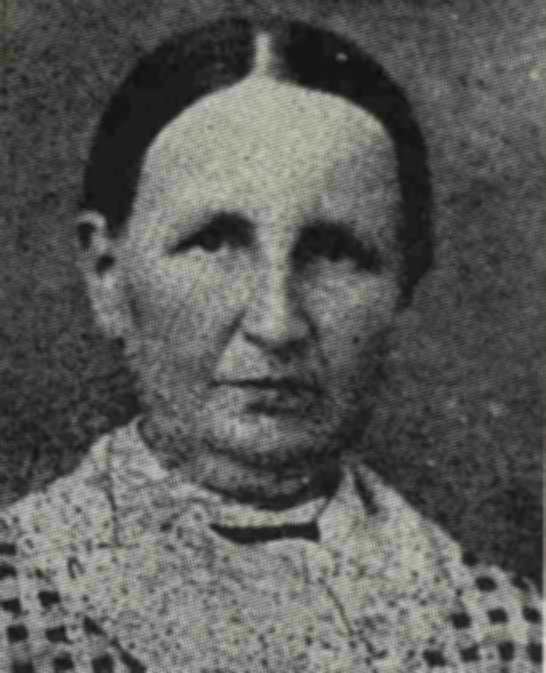 The names, Clark and D'Spain, are among the first great leaders of the Restoration Movement in the state of Texas. Hetty D'Spain was but a child, when she, along with her parents, her mother Rachel, brother Lynn, and over three hundred members of the Church of Christ left the city of Waterloo, Alabama in the mid - 1830's to move west. The wagon train, whose scout was none other than Davy Crockett, headed to the new land of Texas, still under the control of Mexico. However, lest we move too quickly, it is good to go back two generations and see the process of events that led up to the great work both J.A. and Hetty Clark did in Texas.

In 1772 Hetty's grandfather, Benjamin Lynn, of the state of Pennsylvania, moved and settled in Bardstown, Kentucky. He brought two men with him, John Ritchie and John Gilkey. The three men started a distillery business together in the groves of North Central Kentucky. To this day Bardstown is known for its production of liquor. However this was a time before Bardstown got its name. The area was still relatively untouched. It had rich virgin timber land. The Indians were very spread out in the area, and there were only a few cabins together that made up the little community. Very soon after arriving the Revolution began, the British had stirred up the Indians against the white man. As a result, Indian raids broke out, people were killed, and homes were burned. Many of the area settlers fled to nearby Fort Harrodsburg, including Lynn and his friends. It was during this time that Lynn was studying his Bible.

To better set the stage, it should be known that the man who was overseer of Fort Harrodsburg was none other than George Rogers Clark. Clark was the brother of William Clark of the famed duo, Lewis & Clark, whose famed expedition to the west is a mainstay in early American History. It should be remembers that George, too, was famous as well. Had fought against Chief Pontiac in Indiana during the Indian wars. Clark was appointed to protect that region in Kentucky, and his headquarter was at Fort Harrodsburg. But most importantly to this story, he was a friend to Benjamin Lynn.

On one occasion the Fort was surrounded by Indian attackers. Their onslaught went on for six months. Then the battle came to a stalemate when neither of the two sides could gain the victory. The Indians could not get in, which meant, the settlers could not get out. Little did the Indians know that inside the Fort lived a man who had lived among the Indians back in Pennsylvania for seven years who know their language and their ways. That man was Benjamin Lynn.

After a six month siege, the hope of the Indians was to starve the settlers out. However, Lynn foiled the plans of the Indians single-handedly. Late at night, he would slip out of the fort to spy on the Indians. In the dark he would converse with them to find out their plans, and while outside would gather food to bring back for the starving settlers. In the end, the settlers withstood against the Indian invasions.

After the wars with the Indians, Lynn went back to Bardstown, deciding to preach. He didn't preach Baptist doctrine, just the Bible. As a result, the local Baptists didn't like it, which caused him to pull away from them. In 1805, Lynn had heard of Barton W. Stone, but did not know him personally. He traveled 80 miles northeast to ask him if he would baptize him. It took several days to make the journey to Cane Ridge through the woods. He found Stone who baptized him for the remission of his sins.

Benjamin Lynn then moved south with his family, to Huntsville, Alabama in around 1810. His daughter Esther, married John Chisholm of Kentucky. His other daughter, Rachel married Marshall D'Spain (sometimes DeSpain). With his family he began preaching in the Huntsville area. He was probably Alabama's first located preacher. In 1814 he organized the church, but died in the fall of that year. It is believed that the location of Lynn's final resting place is in an unmarked grave somewhere on the property of the University Of Alabama, Huntsville campus.

Note: In the year of 1814, Alexander Campbell is still working among, and affiliated with the Baptists, and Stone has broken with the Presbyterians, but his influence had not reached this far south except through Lynn.

After the death of Lynn, the D'Spains and Chisholms moved westward to the northwest corner of Alabama, to a few miles north of Florence. They began worshipping in their home, studying with neighbors, and God gave the increase. In 1824 a church was organized that still meets to this day. This congregation, just a couple years after its inception, was where B.F. Hall preached baptism for the remission of sins, resulting in the obedience of the young man, Tolbert Fanning. Today this congregation is called Stoney Point Church of Christ, the oldest continuing congregation in Northwest Alabama. The Chisholm Graveyard is the oldest cemetery in Northwest Alabama, located on Chisholm Road about six miles north of Florence.

The D'Spains went to the very corthwest orner of the state, what is now called Waterloo, Alabama. There, Marshall and Rachel established the Lord's Church in this small village that borders Tennessee and Mississippi. In 1826 the church at Waterloo was established. In 1830, it is reported that Mansil Matthews and cousin James Matthews ordered 300 song books for a church meeting in Waterloo, Alabama from Stone's publishing house. In 1835, the church at Waterloo disappears. No records in the State or County show what happened to this group of Christians. A few years ago, in the library at Texas Christian University, a letter by Dr. Mansil Matthews, in his own handwriting explained what happened to the Waterloo Church of Christ. The Christians living in Waterloo packed all their belongings and moved to Texas. They hired David Crockett to be their guide. However, Crockett grew tired of scouting for the group because they stopped every Sunday for worship all day, too much down-time spent for Crockett's liking. He left the group at Memphis, and moved on to Southern Texas to fight against Santa Ana, and the Mexicans. He left Tennessee on this trip never to return. He was killed at the Alamo, San Antonio, Texas. It is not known if he ever obeyed the gospel, but it is certain that he heard it.

The group finally arrived in Clarksville, Texas. On January 1, 1836 the church was established on Texas soil. So, the church at Waterloo disappeared, but showed up in Texas. They were only in this area a short time. For protection they built a several log buildings around a main gathering place and called it "Fort Clark." But, their time in Clarkesville was relatively short before little by little everyone began spreadng further afield in the Lone Star State. Over the next 30 or 40 years many churches were started from this group and its influence.

Note some other things of interest concerning the Lynn family. Benjamin taught his family well. His daughters married good men. They were Christians who taught their children the gospel. The Mansell D'Spains in Waterloo had two children. A son, Lynn DeSpain, was a gospel preacher in Tennessee, Alabama, Mississippi and Texas. They also had a daughter, Hetty Esther D'Spain (named after aunt Esther Chisholm.)

When the migration to Texas took place, Hetty met and married Joseph Addison Clark. The Clarks had two sons, Addison and Randolph. Both of these young men grew to be gospel preachers. The Clark brothers, along with their father, established a Christian college at Thorp Spring, Texas. Joseph named the school AddRan College, after his sons' first names. Some of what would now be called ruins, remain on the site in Thorp Spring. The state of Texas has declared it as public domain, and keep up the park area.

The Incident At Thorp Spring Church

After 1860, the addition of instruments of music into the worship of the disciples began to increase in different regions of the country. Texas was no different. The disciples at Thorp Spring had considered the instrument. Both Addison and Randolph, the sons of Joseph and Hetty, saw no problem with the innovation. However, father Clark, did not consider its addition with the same sense of generosity. At one point, Joseph Clark had told his sons that to bring it in would cause the church to split. As the controversy hit its peak, a petition had been signed by 3/4 of the congregation saying they did not want to see the piano added to the worship.

The will of Joseph and anti-instrument group was put to the test when a minister was coming into the area for a revival meeting. The younger Clarks knew that the preacher enjoyed the instrument, and saw the opportunity to introduce it into the worship. They came to their father encouraging him that the visiting minister would enjoy the musical accompaniment. To this J.A. Clark sternly warned his sons of its folly, but to no avail. On the given day for the revival beginning, the woman prepared to begin playing the piano. When the accompaniment began, the old Joseph Clark, now in his 80's, got up, and with cane in hand, slowly walked out of the church building with 2/3rds of the congregation following behind him. The other 1/3 left were in tears at the sad parting. See more this event here.

After the death of Joseph Clark, the campus briefly moved to the city of Waco, but by the turn of the 20th century, the schooled settled in the city of Ft. Worth, and is now known as Texas Christian University.

The Clarks are buried in the old city cemetery in Thorp Spring. It was a joy for me and one of the elders at FC/C, Ray Cozart, to visit both the old Thorp Spring campus and the city cemetery in the late summer, 2000. It was a joy and honor to visit the graves of Joseph and Hetty Clark. Also, their son Addison, and his son, Addison Jr. are buried nearby. The pictures and directions below should make any Restoration Movement enthusiast want to make the trip to the little town of Thorp Spring, Texas 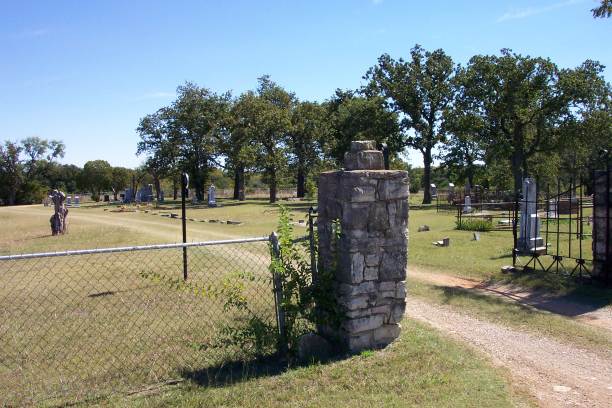 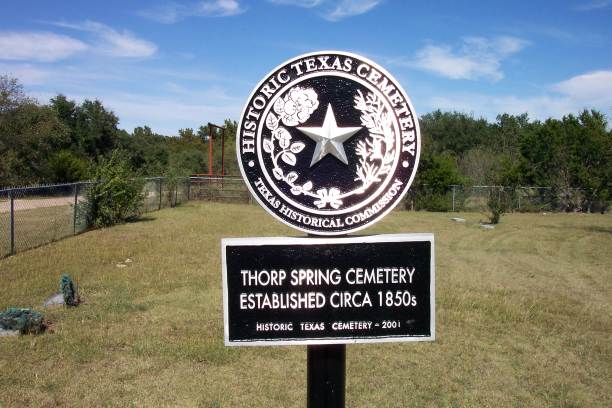 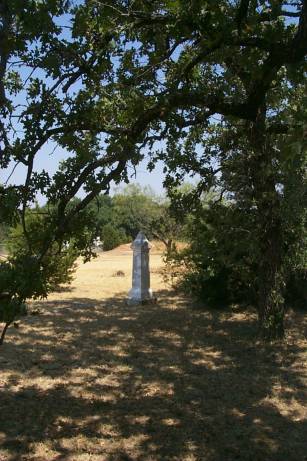 The Grave Of J.A. & Hetty Clark 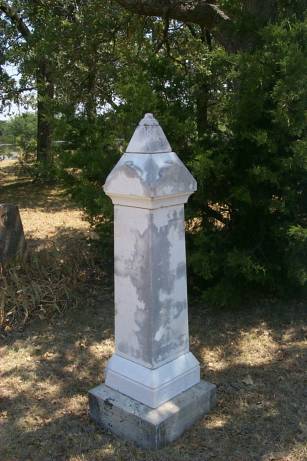 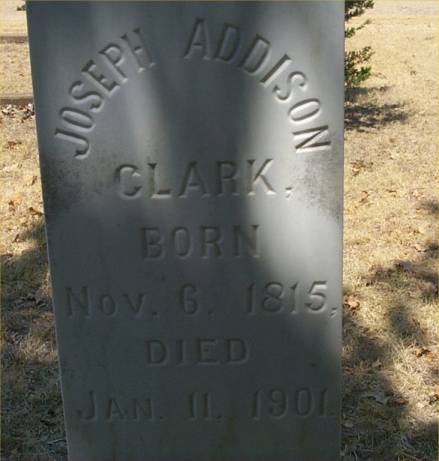 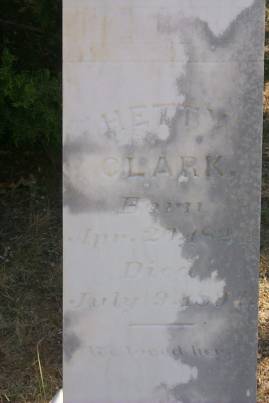 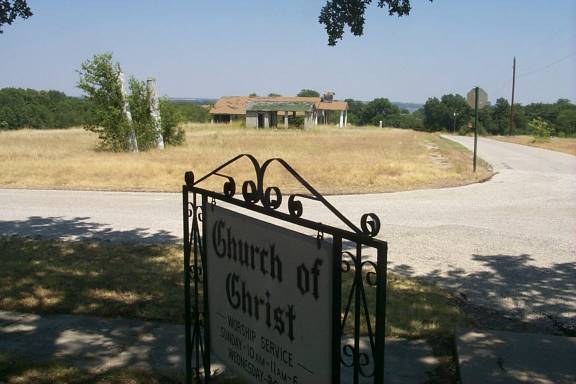