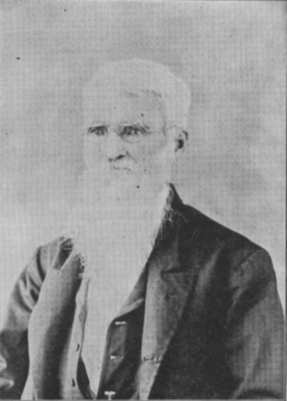 J.A. CLARK was born in Shawneetown, Ill., November 6, 1815. When he was an infant, his parents moved to the Falls, on the Ohio River, where Louisville, Ky., now stands, which was then little else than a rural village. From the Falls they moved to Hopkinsville, Ky., and from there to Columbia, Tenn., while he was yet in his childhood. In 1824 his father took him to Nashville, Tenn., on the historic occasion of the national ovation in honor of Lafayette during the visit of that celebrated patriot and philanthropist to the United States after the War of the Revolution.' On this trip young Clark saw a steamboat for the first time. It was a small craft on which Lafayette came up the Cumberland River to Nashville. Such a vessel would now be considered little else than a toy boat, but it was then a marvel to hundreds of people, and the first steamboat many persons in the great crowd had ever seen. One year later his father died, leaving him, a younger brother, two sisters (one of whom was an infant), and a widowed mother to make their way in the world. Soon after the father died, the mother moved, with her four children, to Selma, Ala., where he learned to. be a, printer.' In IS32 they moved to Columbus, Miss., and in .1834 the mother and three of her children returned to Kentucky. In 1837 he followed them, and accepted a position as principal of an academy at Mount Pleasant, near Liberty, Ky., which, as a post office, then went by the name of Keene, Jessamine County. The academy was in the same enclosure with the Baptist church. Edmund Waller, father of John L. Waller, of Bible revision notoriety, preached for the Baptist Church at that place while be was in charge of the academy. While there his younger brother died, and, in 1839, he moved to Texas with his mother and two sisters. They went by water from Louisville, and disembarked at Matagorda, at the mouth of the Colorado River. Three weeks after they landed the mother died, leaving him in a strange and almost uninhabited country, with two orphan sisters to provide for. Soon afterwards the older sister married, and he moved with the younger sister to Austin, Texas. He was living in Austin when the Congress of the Republic of Texas held its first session in that city in the fall and winter of 1839. In connection with John Henry Brown, afterwards -Major Brown, he prepared a "Topographical Description of Texas;" but when the manuscript was ready for the printer, obstacles which would be considered insurmountable by an author now had to be overcome before, the book could be put on the market. Arrangements were made to have the printing done in Austin, but no satisfactory facilities for binding the books could be, found in the capital of the new republic. His energy was equal to the emergency, however, and he took his part of the books to New Orleans to have them bound. On his return, be landed at Lynnville, on Lavaca Bay, and learned that Comanche Indians had just been there and burned the town. The people all escaped in boats on the bay, except two women, who were made prisoners by the hostile Indians. He could get no conveyance from that place to Austin; but as he was not a man to be, discouraged or defeated in a purpose by a trifle, he left his books and walked over two hundred miles through an Indian country to Austin. He made the trip without accident or injury, but he never beard of his books again. Indians were troublesome citizens around Austin in those days. They killed two men while he lived there the same night at different places within a mile of the city - one north and the other east of town. In 1841 he moved from Austin with his sister to Nacogdoches County, where he again engaged in teaching school for a time, and, later on, in surveying. That section of country had been settled in an early day by Spaniards, a few of whom still lived there when he settled in the county. There is now a Spanish building in the town of Nacogdoches which was erected more than two hundred years ago. There, were, several large old Spanish grants of land in that county, and he was employed as a surveyor to divide some of them into smaller tracts. While engaged in this work, he formed the acquaintance of a Christian girl by the name of Hettie De Spain. Acquaintance soon ripened into love, and they were married in 1842. The purity of her life and simplicity of her faith in Christ soon made an impression on him, and in less than a year he confessed his faith in the Lord Jesus and was baptized into Christ. A short time before he was baptized, he moved to Titus County, where he began to preach the gospel in less than a year after he became a Christian. The country was thinly populated and churches were few and far between. Where he lived, there was a large congregation of undenominational Christians; but there were already two. preachers there, and he felt that he was more, needed and could do more good in other places.

Accordingly, he traveled as a preacher over the country on horseback long distances, crossing ugly streams and exposing himself to many dangers. In those early days nearly all meetinghouses and schoolhouses were " free for all orthodox preachers to preach in; " but, as he opposed all, denominations, all denominations opposed him and held that lie was not orthodox. This made it difficult for him to find houses to preach in, and much, if not most, of his preaching was done in private houses. When he found a place to preach, he usually remained and continued the meeting till he, established a congregation of Christians. Later on he would revisit such congregations to see, how they were getting on and to give them any scriptural instruction and admonition they needed. While engaged in this work, he went into Harrison. County. There were many meetinghouses and schoolhouses in the county, but he could find no house he would be allowed to preach in. Finally a wealthy planter who belonged to no church said to him:

"There is a house on my place that was built for a schoolhouse; but when I bought the place and built near it, I appropriated it to my own use. If it were not for the use I have made of it, I would ask you to preach in it. The floor is yet in it, and I could clean it up so there would be no offensive appearance; but I have used it for such purposes that I cannot ask you to preach in it."

" What have you been using it for?

" I have been using it for a stable, but I could clear it of all appearances of a, stable."

" Well, Mr. Edwards, my Savior was born in a stable, and I am not, ashamed to preach in one."

After this colloquy the house was fixed up, an appointment was made for preaching, and everything in and about the house was so cleaned away that, no, one who did not know what use it had been put to would ever have suspected it. He had a very successful meeting, and baptized the wife and young son of Mr. Edwards, in whose house, the meeting was held. Mr. Edwards himself was deeply moved by the preaching and confessed that he believed the. doctrine, but declined to become a Christian because he had lived a wicked life so long, frequently using profane language and sometimes drinking to excess, he feared he could not break off his evil habits and live a consistent Christian life. The preacher talked to him privately in a kind and gentle way, encouraging him to commit himself to God and make the effort, relying upon divine help for success He took the admonition gratefully and wept freely, but he could not he persuaded to give himself to God. He remained a firm friend of the preacher as long as they knew each other. Later on he moved to the town of Rusk, in Cherokee County, and for a time practiced law; but after a few years he abandoned the law as a profession and again went out to preach the gospel from a sense of duty and at, the solicitation of members of three churches in the bounds of his acquaintance. They did not ask him to preach at those churches, but urged him to go wherever preaching was most needed and would do most, good. He went, and those churches contributed liberally to his support. He traveled over many parts of Texas, held many successful meetings, baptized hundreds of people, and established a number of congregations. He often traveled long distances and labored for weeks where there were no preachers or churches, and but, few Christians. There are congregations still flourishing in various parts of Texas which he established half a century ago. In 1873 he moved to Thorp Spring and established Add-Ran College for males and females. He superintended and managed the institution till the enrollment of pupils ran up to about five hundred, when he turned it over to his two oldest sons, A. Clark and R. Clark, in a flourishing condition. The college was subsequently converted into a university and moved to Waco, but he remained at Thorp Spring, where he still lives a life of retirement and spends his time in preaching and writing for religious papers. - F. D. SRYGLEY.